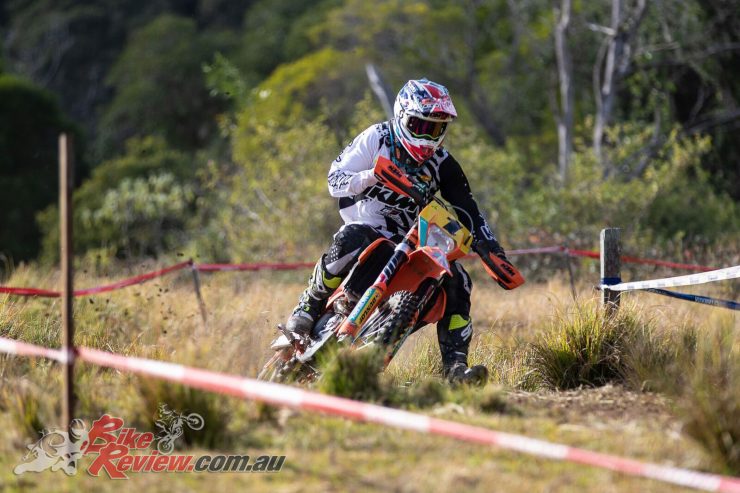 A sun-soaked day saw the field back for another time carded enduro today for Round Six of the Yamaha Australian Off-Road Championship (AORC) as Daniel Milner made the Dungog terrain his own. Aboard his KTM 500 EXC-F Milner was a class above as the fastest rider on the track as he took out E3 honours.

In E2 it was Daniel Sanders making it six from six aboard his Husqvarna, but today definitely wasn’t smooth sailing for Sanders, but he showed his class to recompose himself after bike issues and take the win. Luke Styke got back on the winner’s step in E1 after the Yamaha rider suffered his first loss of the season on Saturday, proving to fast for the field. 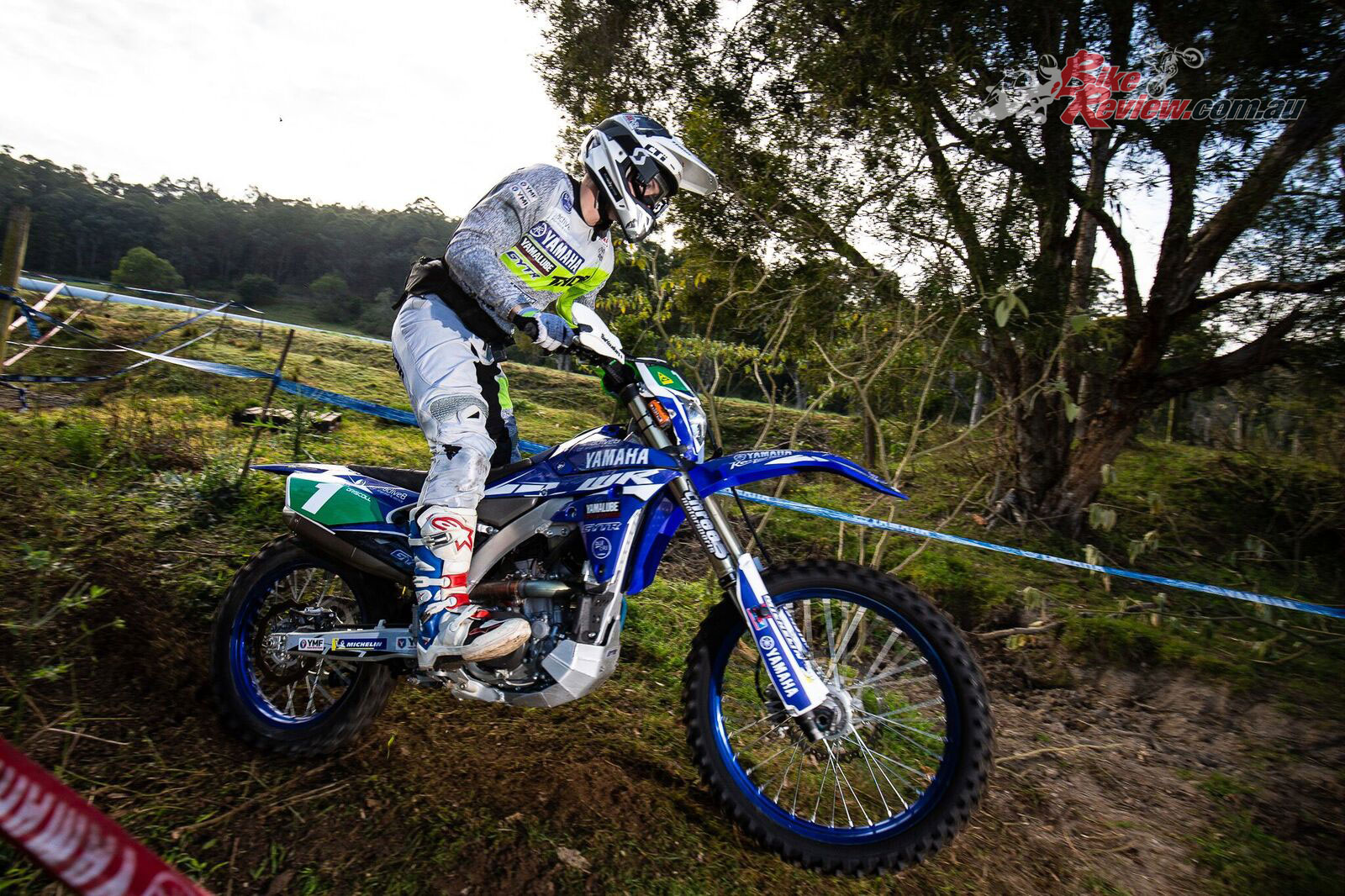 Michael Driscoll continues to dominate the EJ Class taking his sixth win from as many starts. Kyron Bacon put his Honda back on the top step after once again taking J4, Will Riordan couldn’t put a foot wrong throughout today’s racing taking the J3 class on his KTM.

Kobe Conley enjoyed his best weekend of AORC action this year, backing up yesterdays win with another flawless performance.

It was Emelie Karlsson who bounced back from her second place on Saturday to take the Women’s class win. On a day that saw the sun shine through Karlsson was too good for her competition aboard her Yamaha.

Richard Chibnall and Geoffrey Ballard completed the perfect weekend after backing up their Saturday performance with another win on Sunday.

Milner mentioned yesterday that he wanted to put a tough month behind him and boy did the KTM rider do that, Milner was a man on a mission from the first test of the day. The tracks were getting rougher as the day progressed but that didn’t slow Milner down as he stopped the clock at 51:01.310. 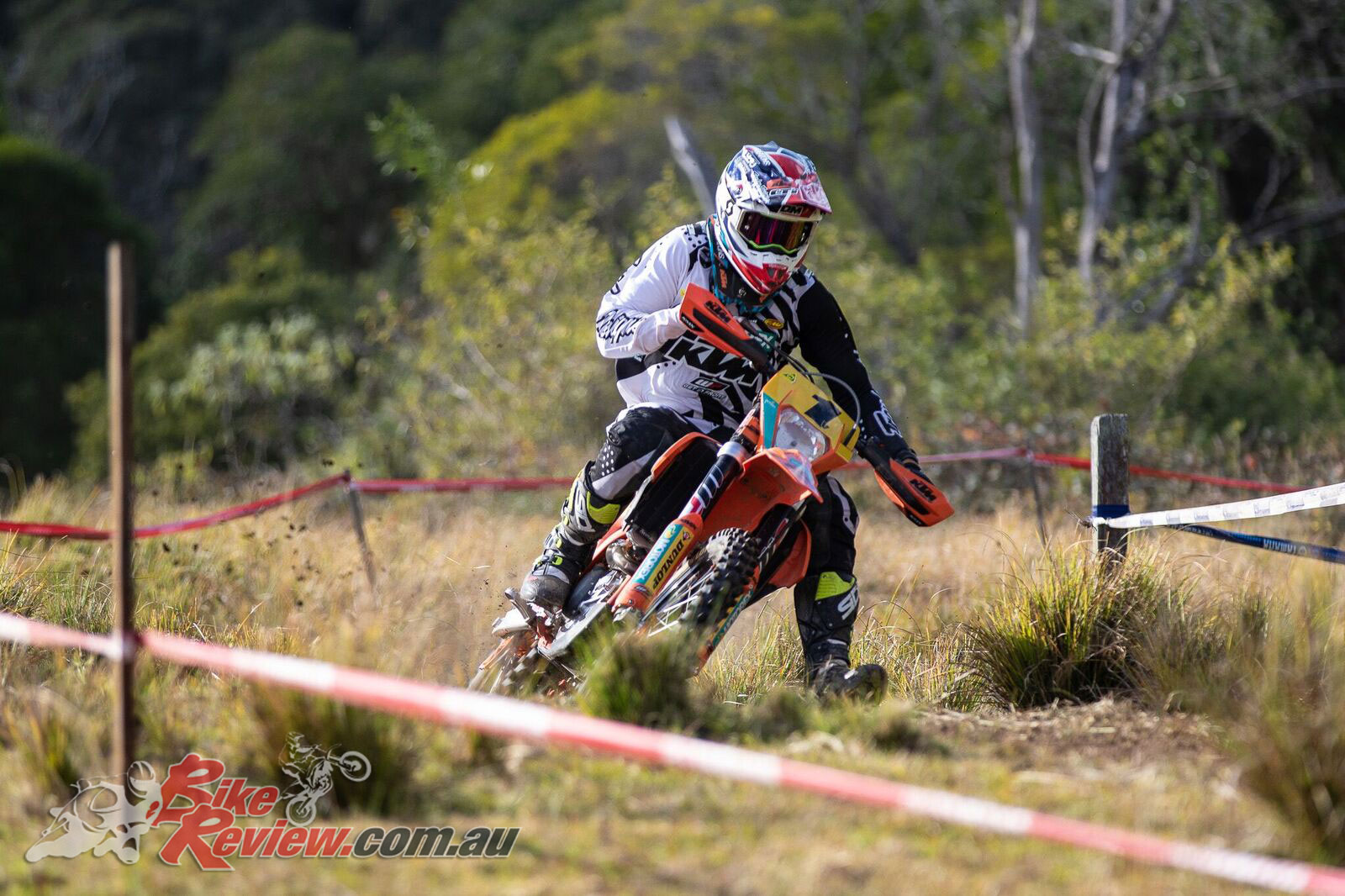 Lachlan Stanford backed up his second place on Saturday with another solid performance today after finishing in a time of 53:11.058. In his first round on his new KTM Scott Keegan is looking at home very quickly as he grabbed a pair of third place finishes, after ending Sunday with a time of 53:41.357.

Milner was thrilled with the test provided by Dungog Motorcycle Club, “The Cross test here this weekend was up there with one of my favourite test we have come across in AORC, the layout was great and had nice lines. Today was a bit slower this morning but we got through that and tried to limit our mistakes today as the tracks deuterated as the day went on. It was great to put the last month behind me after Hattah, I wanted to push hard and get the win, I had put everything into today and we got the win,” finished Milner.

Sanders was once again the man to beat in the E2 class, but today wasn’t without its struggles after a technical fault halfway through the day threatened to end Sanders day early. After needing to put his mechanical hat on during the trail, Sanders managed to put the wires together and get his Husqvarna back on track. After this Sanders was a man on a mission and nothing was getting in his way of claiming back the time he had lost due to his mechanical issue, and did he ever, taking the win with a time of 52:43.042. 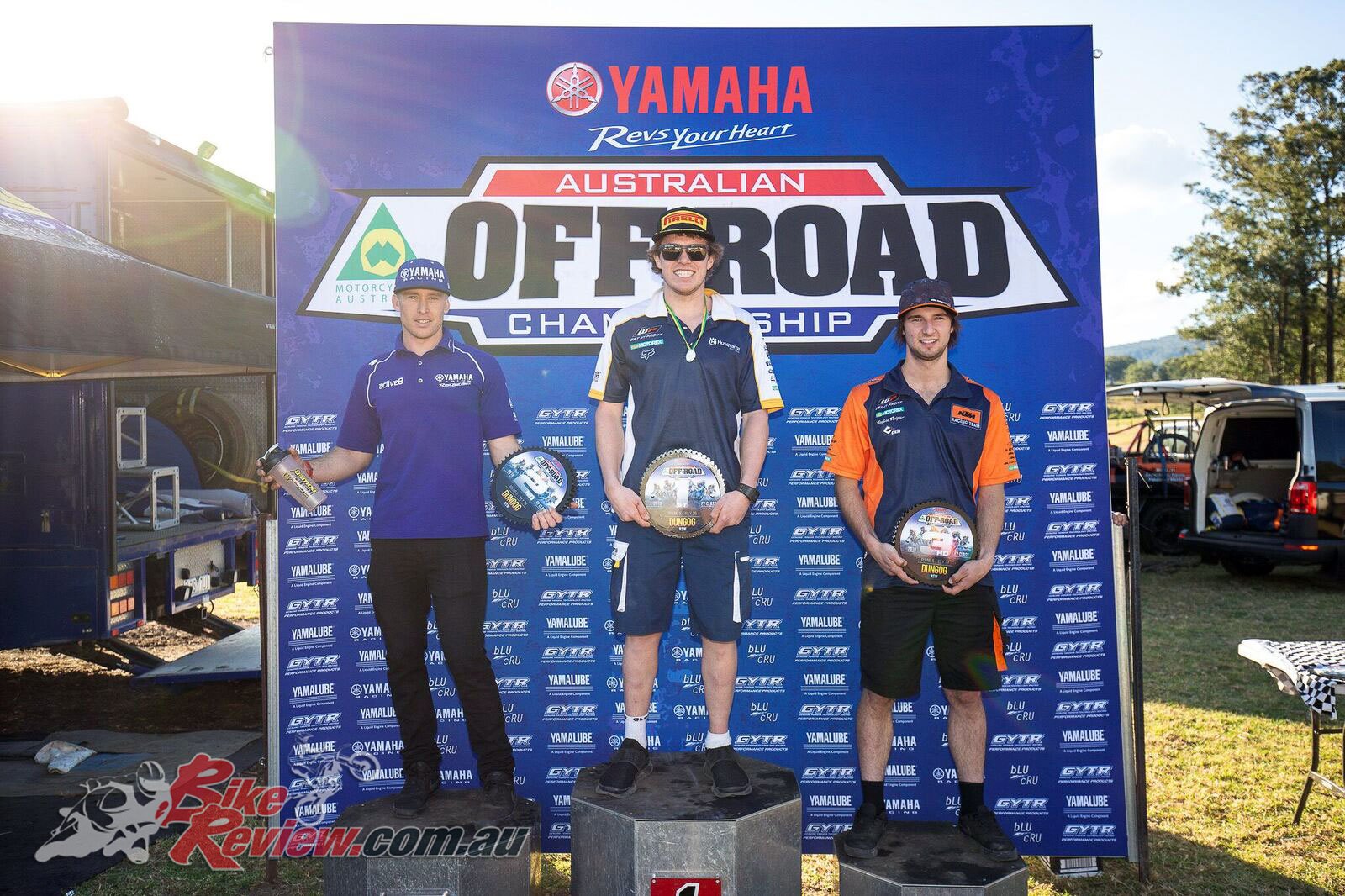 Mr consistent Josh Green would finish today’s racing in second position to back up his second on Saturday. The Yamaha rider will take a lot of momentum out of this weekend after ending today in 52:57.406. The podium was rounded out by KTM’s Lyndon Snodgrass who pushed through the enduro to end with a time of 53:15.452.

Sanders enjoyed the first enduro of the season,” The first enduro of the AORC series, it was nice to see an old school enduro with some technical aspects. The tests were good I enjoyed that they were tough, and it separated the pack. Today was a tough day for me when I was battling away with Milner up the front but on the second lap of the trail I had a fuse go, and I had to go back to my apprentice days to get the bike going again. I was lucky enough to make up the time I lost in the remaining test and grab the win,” said Sanders.

Luke Styke jumped straight back in the winner’s circle after taking the E1 win today after his first loss of the season yesterday. Styke looked to be enjoying the conditions as they became tougher throughout the day, but the Yamaha rider made it look easy stopping the clock at 53:20.324.

After his breakthrough win yesterday Fraser Higlett would have to settle for second as the Husqvarna rider finished todays enduro with a time of 53:37.975. Frenchman Jeremy Carpentier made his way onto the final step of the podium today, as he pushed his Yamaha to the limits over the day completing the track in 54:14.983. 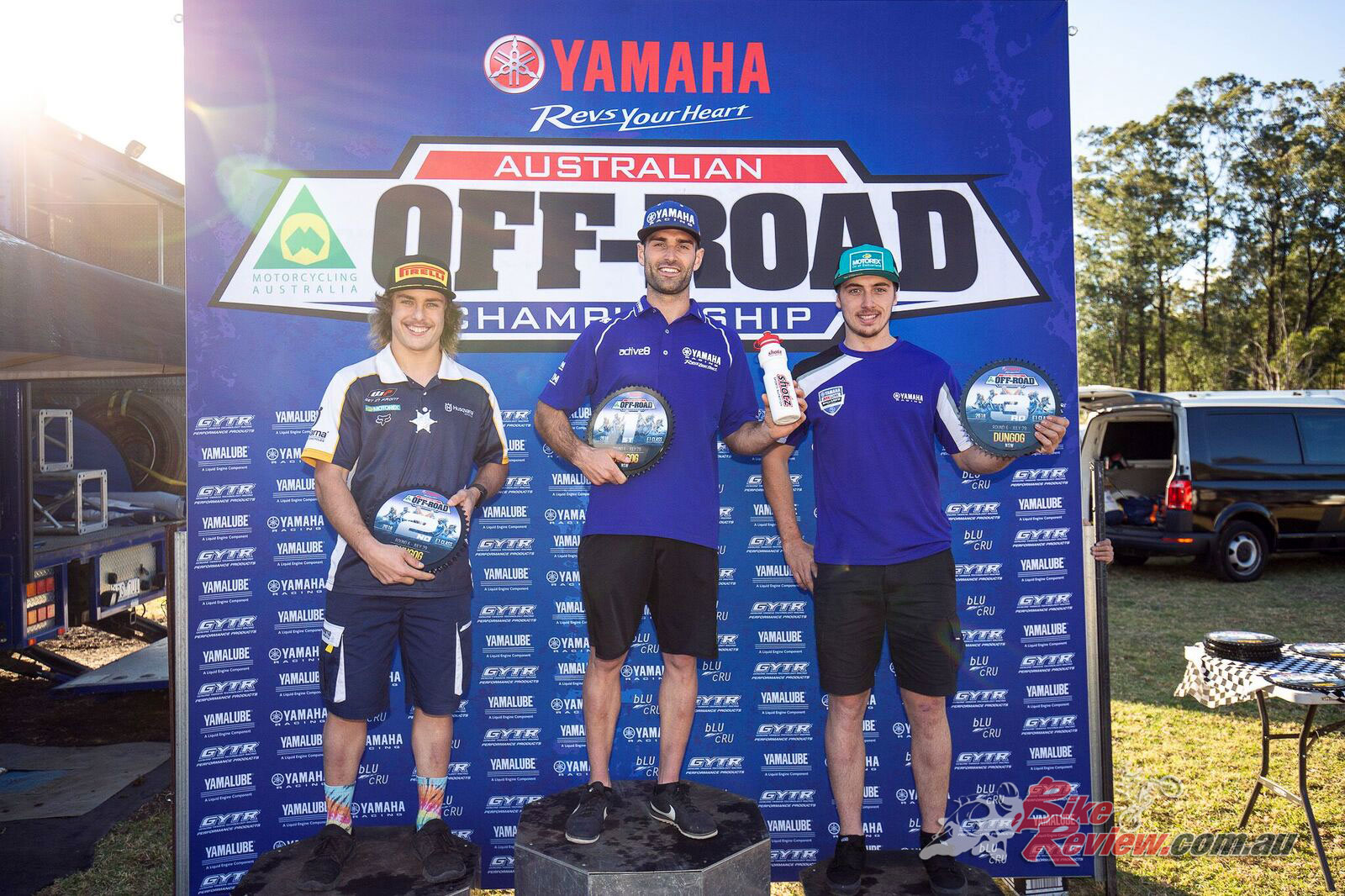 At the first weekend of AORC and the 125cc Amateur Cup it would be Geoff Braico backing up his win on Saturday with another win today. Aboard his Husqvarna Braico simply was a class above with a time of 55:21.831. Ben Grabham was back out again today loving his time on the 125cc Sherco machine, stopping the clock at 57:02.586. 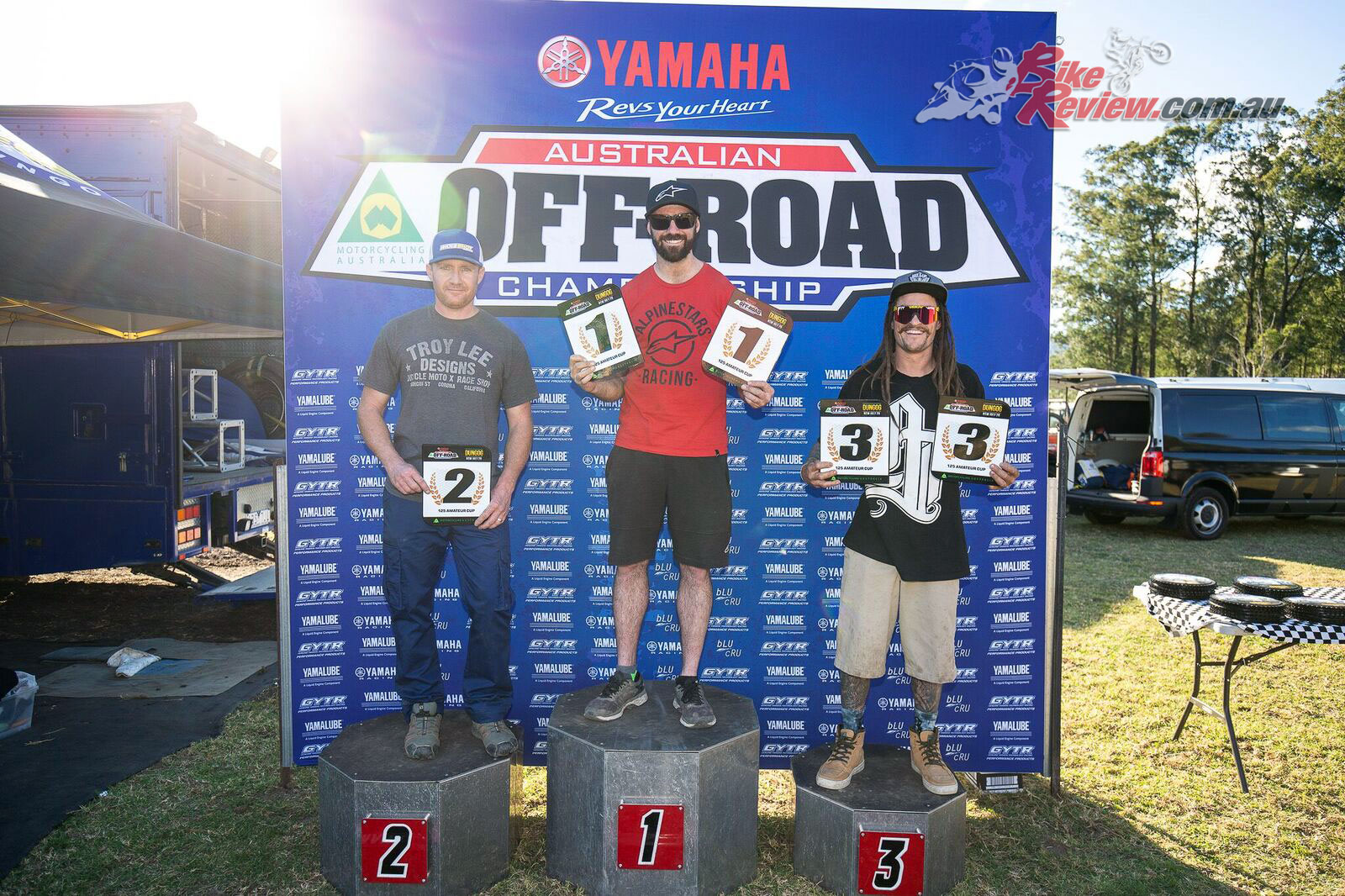 Driscoll continues to be the man to beat in the EJ class as the defending champion took out Round Six at Dungog, NSW to cement himself at the top of the points table. The Yamaha rider didn’t look back after a quick morning setting the tone for the day, finish in a time of 1:00:16.208.

Joshua Brierly continued his consistent weekend aboard his Husqvarna, placing in second after stopping the clock at 1:01:22.574. Rounding out the podium was Dungog local Corey Hammond, who certainly didn’t let his home crowd down aboard his KTM, completing the tracks in 1:03:06.111. 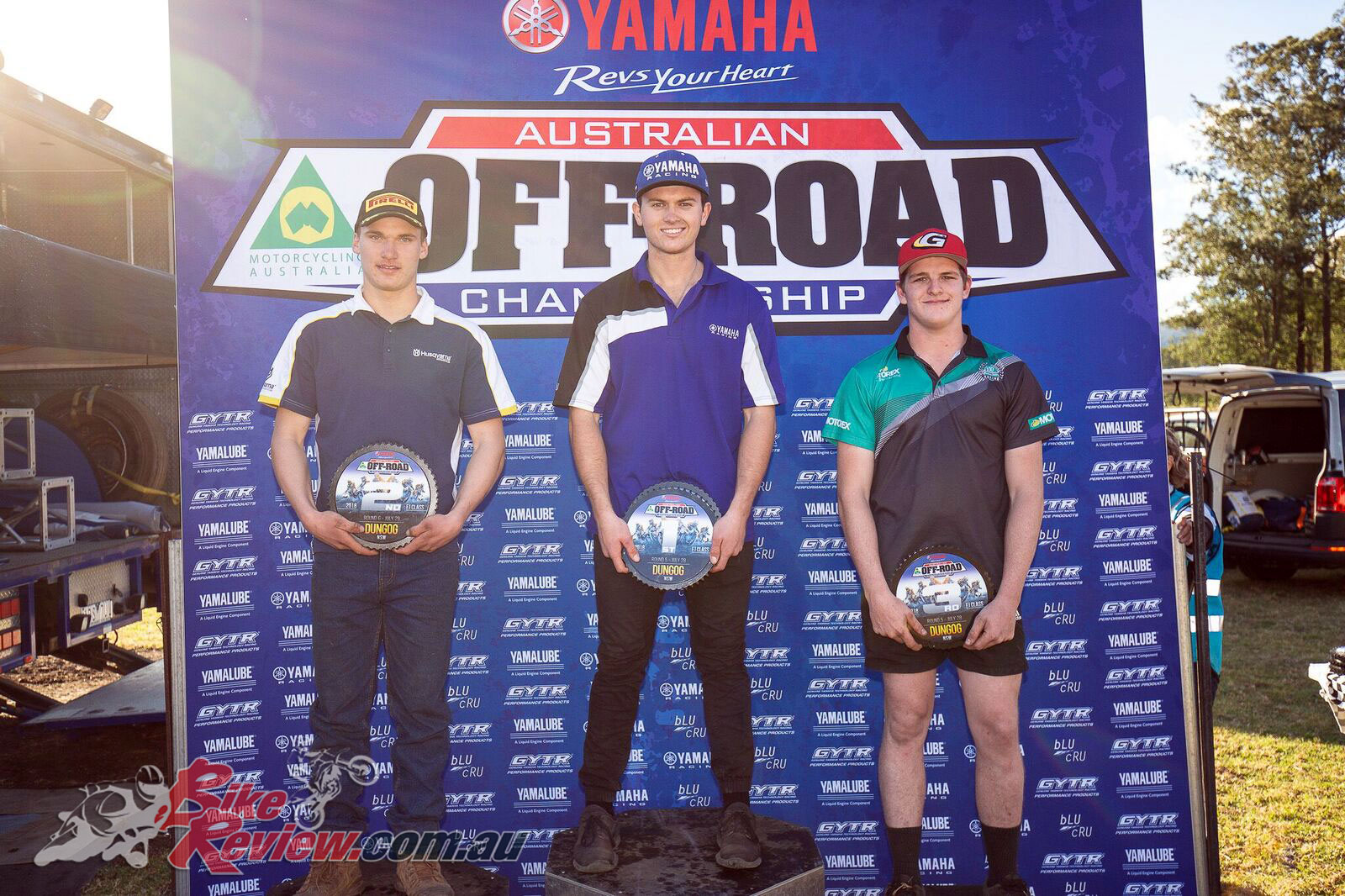 On another sun-soaked day, Bacon proved to have all the answers throughout the day as many of the field tried to challenge the Honda rider, but Bacon remained on top with a time of 40:56.446. 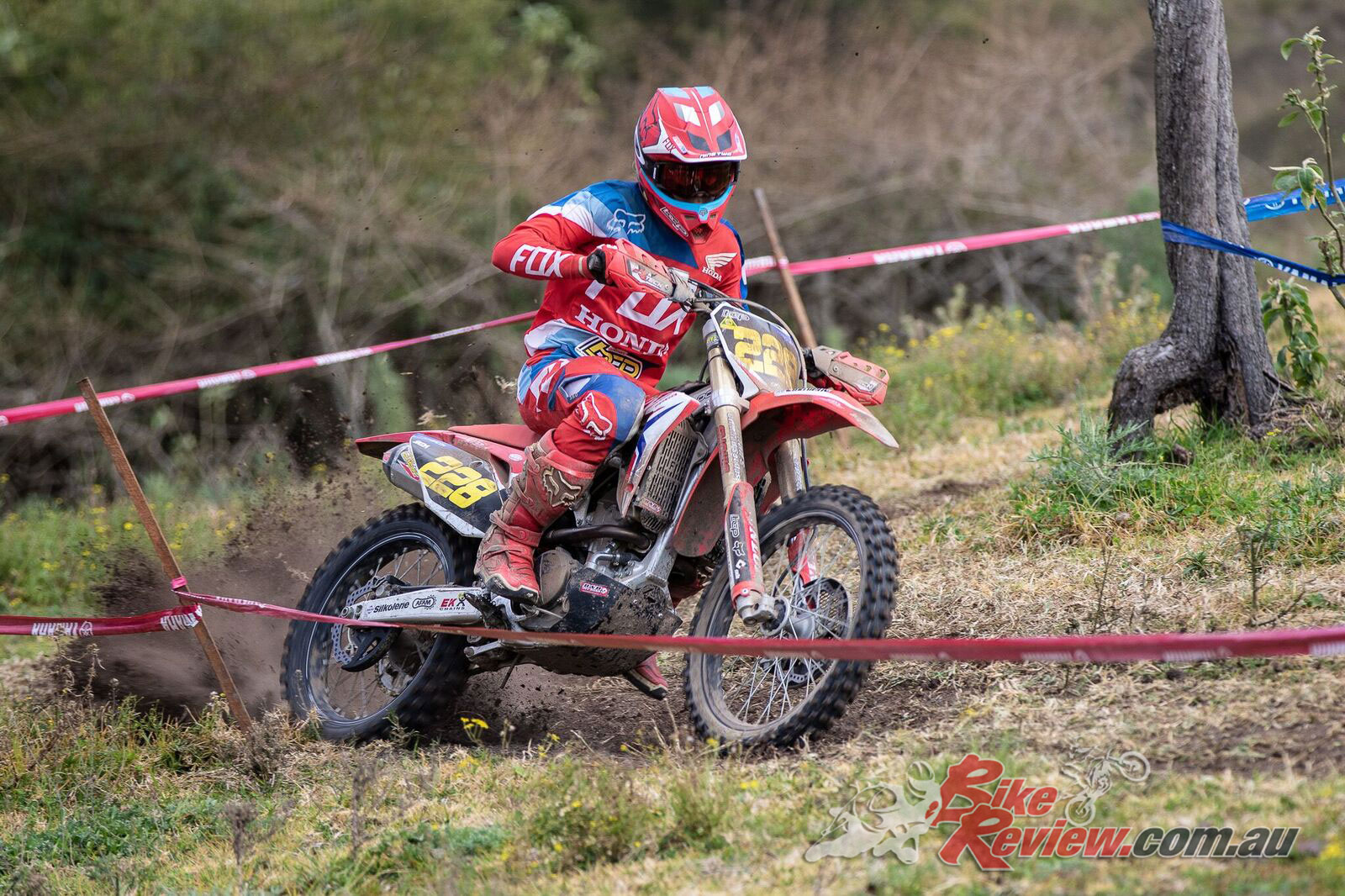 The J4 championship leader coming into this weekend, Korey McMahon would have to settle for second place as the KTM rider just couldn’t match Bacon’s pace stopping the clock at 42:02.563. Rounding out the podium was Matthew Pye who continued his fine form from Saturday, finishing in third after posting a 44:43.657.

Riordan continues his perfect season to date, making it six from six aboard his KTM and sending a message to the field with a great performance. His time of 42:46.107 was too much for the field to catch. Blake Hollis was the next best on the day putting his Yamaha into second position, with a time of 43:16.971. 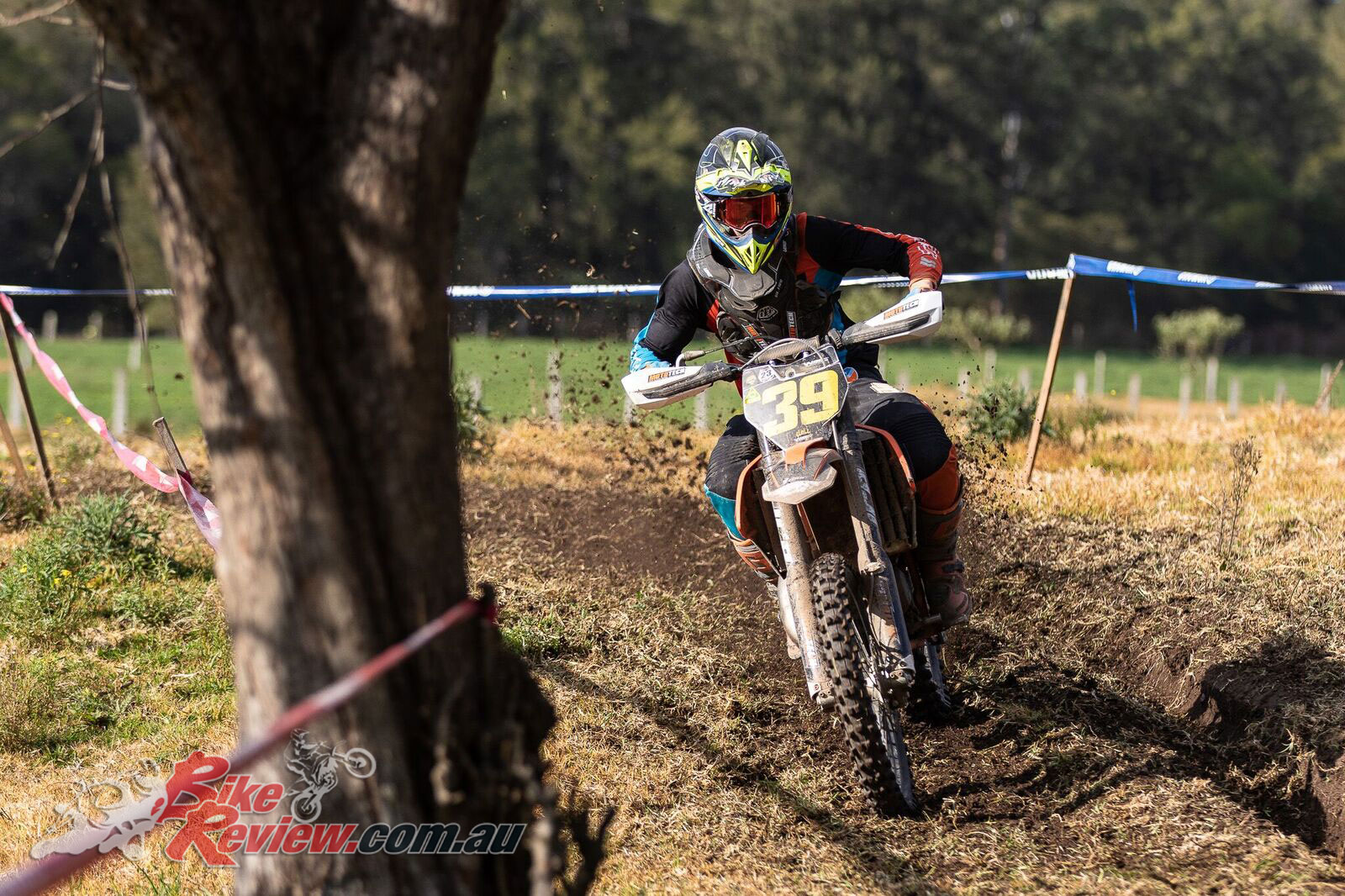 Rounding out the podium was Will’s younger brother Angus who made the jump from J2 to J3 for the weekend and showed he can mix it with the lead group, finishing with a time of 44:49.190.

Conley couldn’t put a foot wrong this weekend on his Kawasaki, setting a pace all weekend that couldn’t be matched, his time of 47:46.937.

The tricky conditions put many of their pace but not Conley, the rider finishing in second place was Zac Perry who was good throughout the tests and trail today stopping the clock at 48:15.366. Billy Hargy grabbed the final spot on the podium after a solid days riding, ending the day with a time of 49:51.978.

After falling short behind hometown girl Jessica Gardiner yesterday, Emelie Karlsson was a woman on a mission today and bounced back to take the days win. Karlsson started the day ok but found a grove through the middle sessions to set herself up for the win. 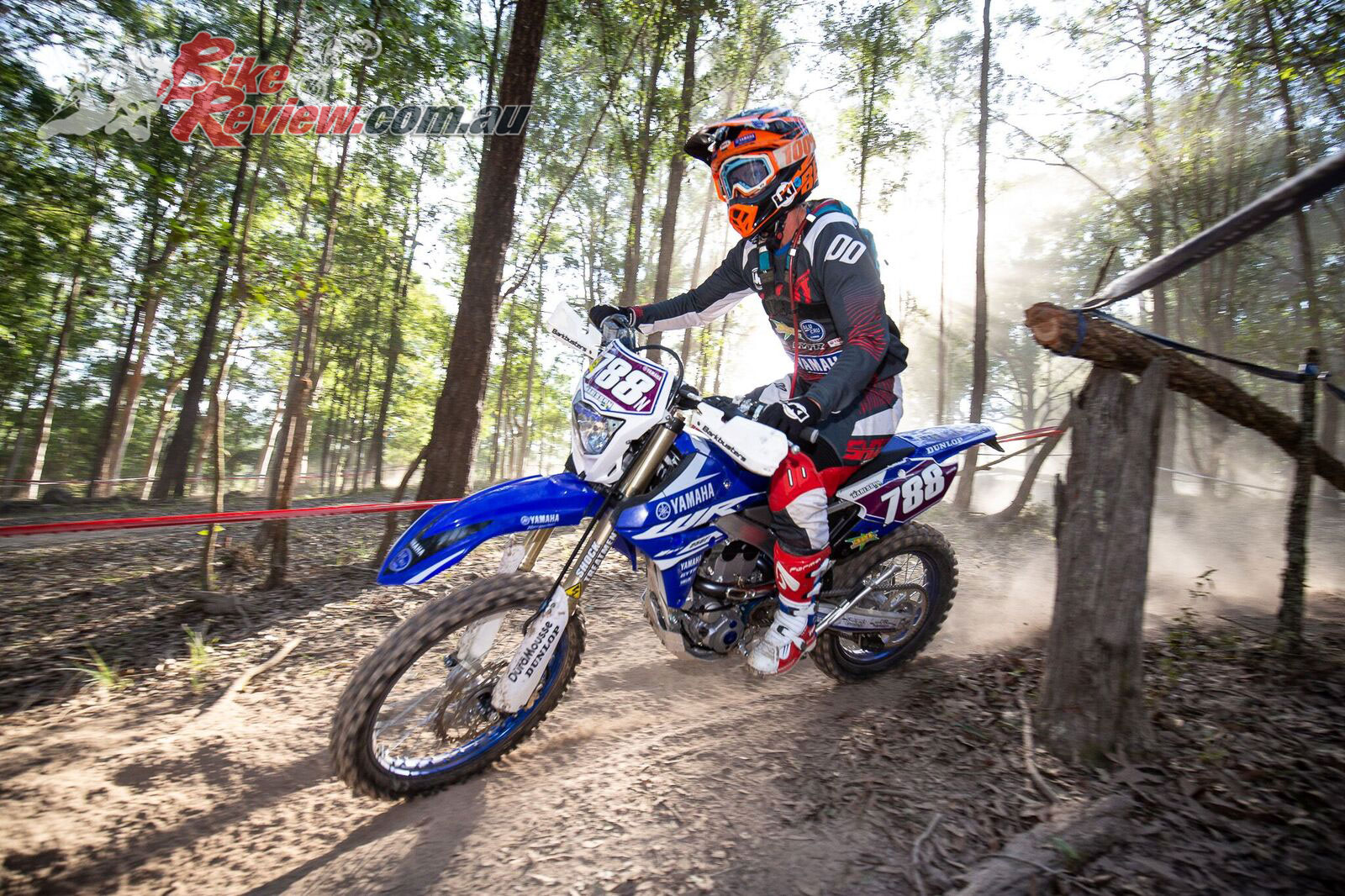 Her time of 1:01:33.534 was enough to hold off the field. Gardiner would have to settle for second as she just couldn’t find the speed of Karlsson throughout todays racing, ending her day with a time of 1:02:03.029 aboard her Yamaha. The podium was completed by Danielle Foot aboard her Sherco, capping off a consistent weekend with a time of 1:08:47.578. 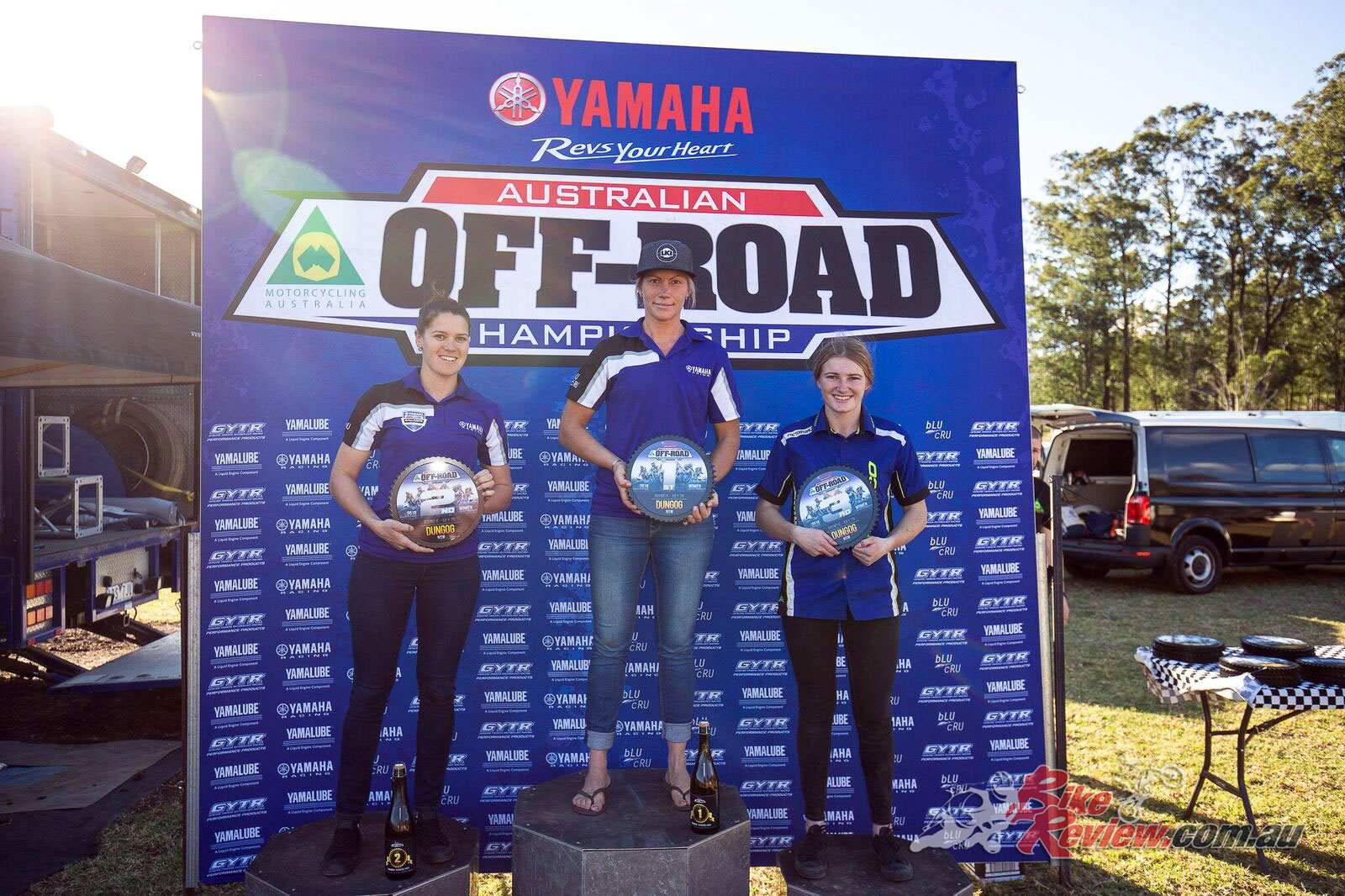 Chibnall made it a perfect double at Dungog, but todays win wasn’t all his own way taking the victory by just over one second. It was close but Chibnall’s time of 59:36.097 was enough to get the job done.

Jade Gartlan fell just short of taking the win from Chibnall, completing the day in 59:37.186 just off the pace. James Burgess rounded out the podium for the Veteran’s class, with his time of 1:00:47.171 to end a solid weekends riding. 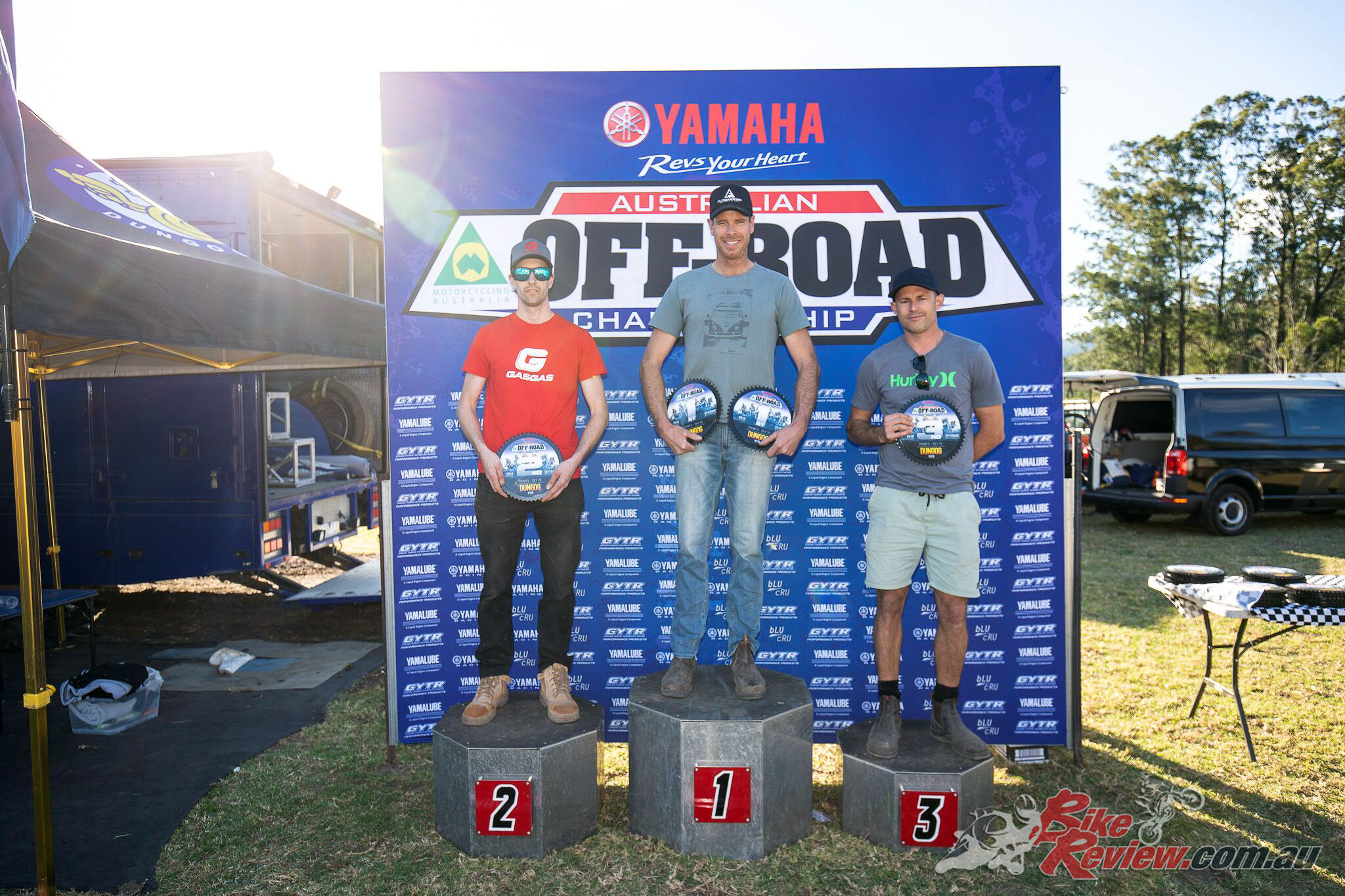 Ballard was once again a step above his competition in the Master’s division, completing Sunday in a time of 1:02:52.772 to take home both wins at Dungog, Ballard impressed on the tough and challenging conditions finding speed throughout the day.

Ashley Sprenger mastered the Dungog conditions on both Saturday and Sunday as he completed the perfect weekend in the Vintage Class. It may have been a first for AORC but Sprenger definitely had that bike dialled in taking the win in 1:12:04.340.

Kevin Cameron battled the tough conditions and the long trail to finish in second after posting a time of 1:39:44.091. The final spot on the podium went to Andrew Dennett whose time of 3:06:34.478 was enough for third place. 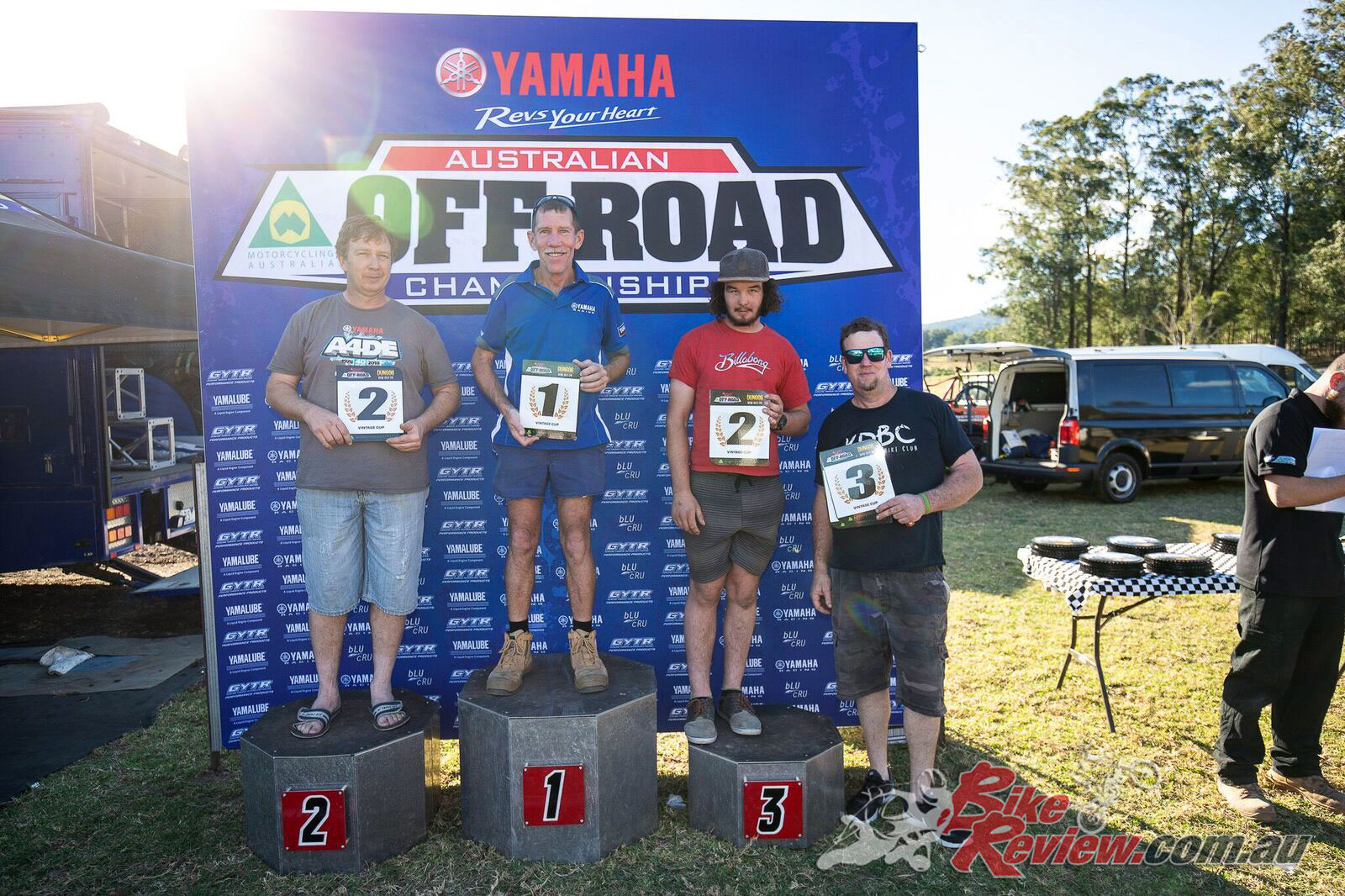