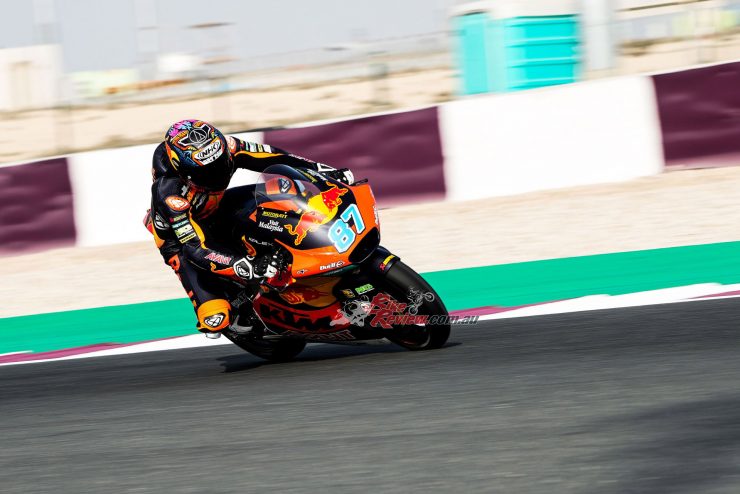 Remy Gardner (Red Bull KTM Ajo) starts Moto2 2021 where he’ll want to go on: at the top. The Australian put in a 1:59.074 to go fastest on Friday at the Official Moto2™ and Moto3™ Qatar test, pipping Aron Canet (Inde Aspar Team) to the post as he took over late on. 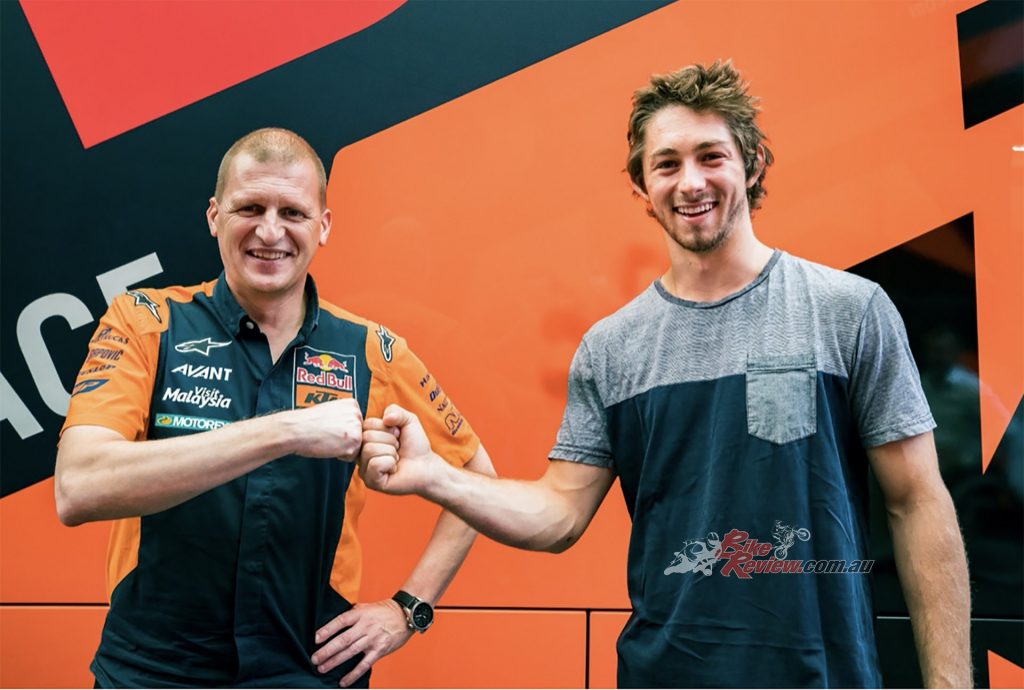 Friday Moto2
They say it’s hot in the city but it was also hot just outside it on Friday, with the conditions in Doha a marked improvement on those that greeted the final day of MotoGP™ testing a week ago. By the end of the day that was more than apparent, with the laptimes dropping from 2:02s to Gardner’s 1:59 dead. Roberts’ pole lap last year was a 1:58.136, so it’s far from a slouchy beginning to proceedings.

Gardner moves to the Red Bull KTM Ajo team this season, one of the biggest names in the class, and the landmark year has certainly started well. So too has it for Canet, as the 2020 standout rookie came screeching out the blocks. Roberts was another who moved up later in the day, and another who’ll be wanting to take a key step forward this season; glad of the good start. 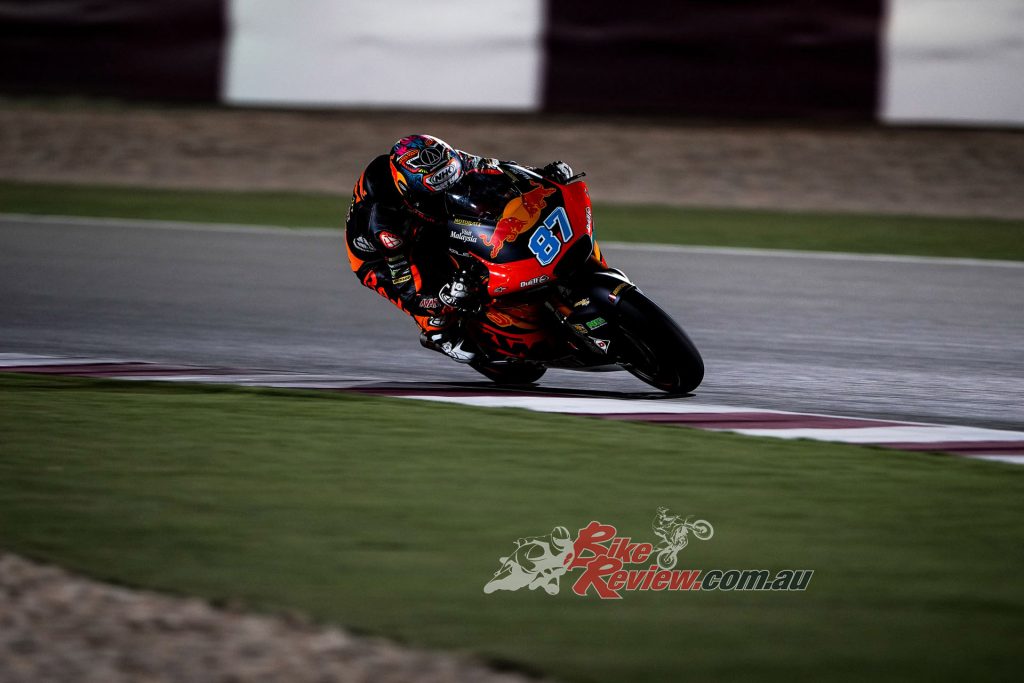 In fourth, Elf Marc VDS Racing Team’s Sam Lowes was up at the sharp end and only a tiny 0.020 off Roberts despite a crash for the Brit in the afternoon, rider ok – as was Hafizh Syahrin (NTS RW Racing GP) as the Malaysian also took a tumble. Fifth went the way of Nicolo Bulega (Federal Oil Gresini Moto2) by an even smaller 0.009, with Xavi Vierge (Petronas Sprinta Racing) taking sixth and only another 0.051 in arrears. In short, it was extremely close in the mid top ten…

Marcel Schrötter (Liqui Moly Intact GP) took P7 a couple of tenths back, with Augusto Fernandez (Elf Marc VDS Racing Team) hot on his heels to the tune of 0.045. Just two thousandths back came Jake Dixon in ninth, the Petronas Sprinta Racing rider coming back from injury and off to a good start. 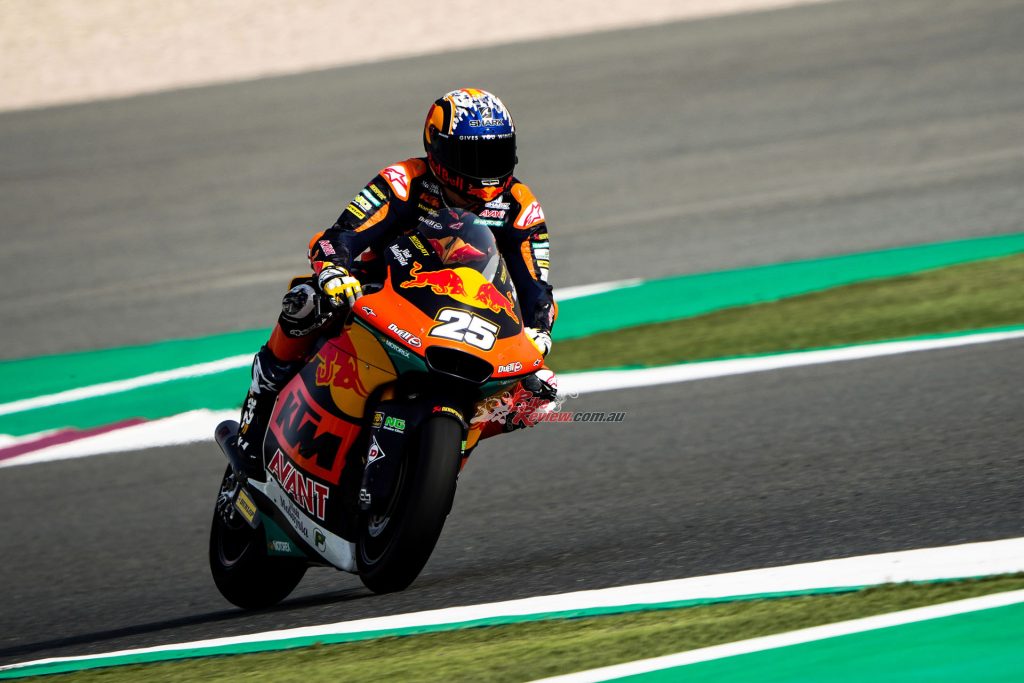 Tenth was an impressive rookie showing from Raul Fernandez. The winner of the final Moto3™ race of 2020 blasted out the blocks in Moto2™ to put in a 1:59.990 on his new, bigger Red Bull KTM Ajo machine, within less than a tenth of Dixon ahead of him and beating Fabio Di Giannantonio (Federal Oil Gresini Moto2) to it by just 0.008. ‘Diggia’ changes chassis this year and was nevertheless off to a solid start. 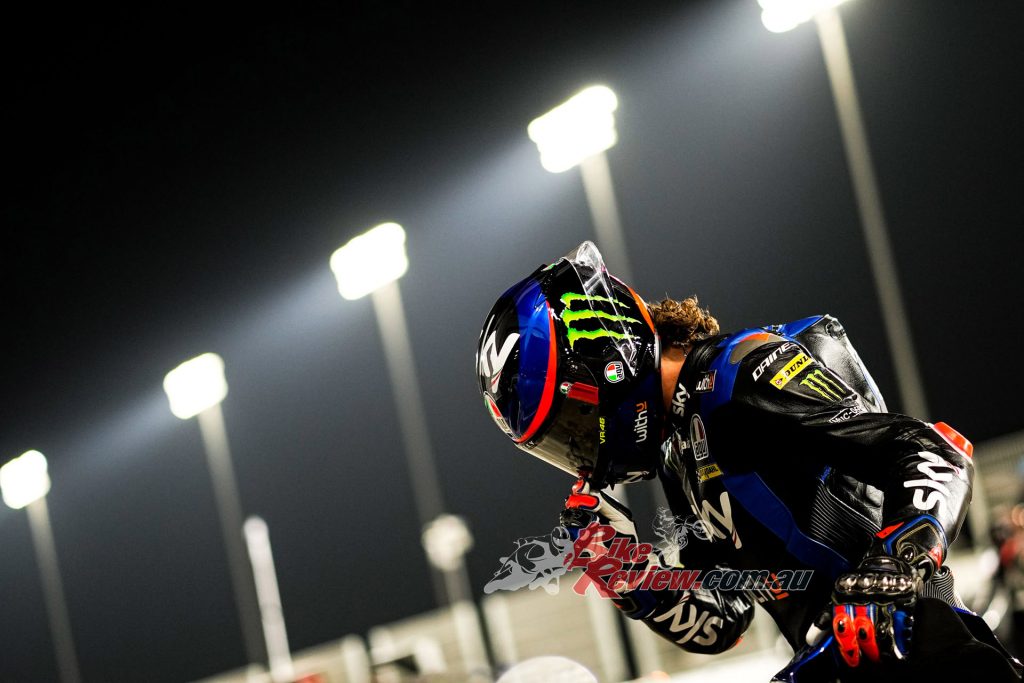 Bo Bendsneyder (Pertamina Mandalika SAG Team), another who changes teams and, in his case, chassis, started the year in 15th and edged out Marco Bezzecchi (Sky Racing Team VR46) by half a tenth.

With so many rookies in Moto2™ this season – most making the leap from the Moto3™ class – Raul Fernandez shone, but many did themselves proud. Tony Arbolino (Liqui Moly Intact GP) was P17 only 0.010 off Bezzecchi – a race-winning benchmark – and Ai Ogura (Idemitsu Honda Team Asia) only another 0.069 back. Reigning Moto3™ World Champion Albert Arenas (Inde Aspar Team) headed up another gaggle of rookies in P23, ahead of Celestino Vietti (Sky Racing Team VR46) and Cameron Beaubier (American Racing). Reigning Moto2™ European Champion Yari Montella (MB Conveyors Speed Up) was two tenths off the American. 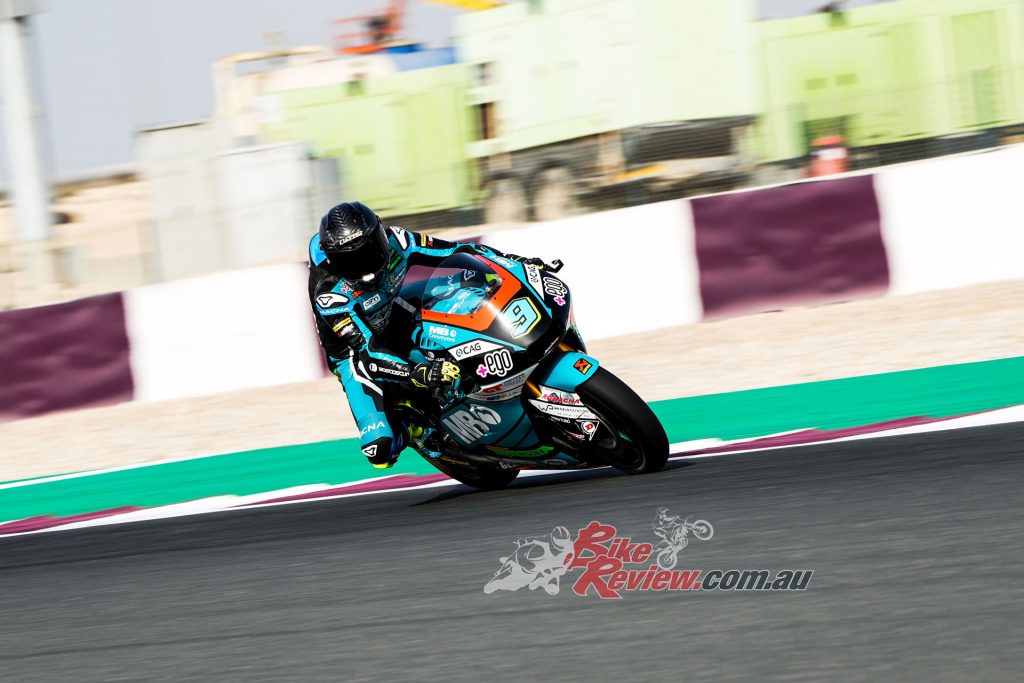 Saturday Moto2
Cometh the hour, cometh the six riders within just 0.089: that’s how the saying shall henceforth go. The intermediate class in Qatar has been close in the current era, but never more so on than Day 2 of the Official Moto2™ and Moto3™ Test at Losail International Circuit. The leader of the Moto2™ pack was Xavi Vierge (Petronas Sprinta Racing), and the rivals within 0.089 Aron Canet (Inde Aspar Team), Jorge Navarro (MB Conveyors Speed Up), Remy Gardner (Red Bull KTM Ajo), Jake Dixon (Petronas Sprinta Racing) and Marco Bezzecchi (Sky Racing Team VR46)… whetting appetites for the race weekend ahead quite considerably.

It was windier on Day 2 and once again the morning session was a quiet one – lonely, even, for Stefano Manzi (Flexbox HP 40) as the Italian was the sole rider to set a time. By Session 2 though, the ante was upping and the pack heading out, with the final session of the day then seeing all but one improve to set the combined timesheets. At the top was Vierge’s late charge with that five-rider gaggle on his tail, with Canet forced to settle for second for the second day in a row but looking threateningly fast, Navarro making waves up the timesheets, Gardner present once more, Dixon improving as he comes back from serious injury, and Bezzecchi leaping into the higher echelons after a more muted Day 1… 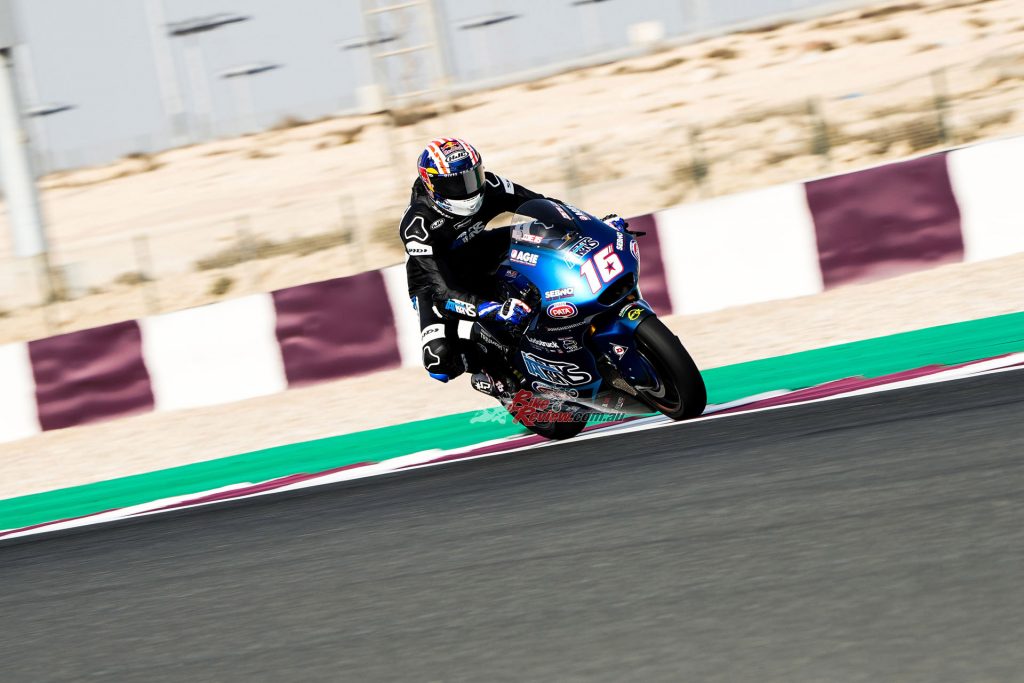 The gaps didn’t exactly get huge from there on out. Two and a half tenths off the super six, Bo Bendsneyder (Pertamina Mandalika SAG Team) slots into P7 as he settles in at his new team and on his new chassis, looking ever more impressive as track time goes on. Likewise the man in eighth: Raul Fernandez (Red Bull KTM Ajo). The Spanish rookie impressed on Day 1, so a grander word is needed for Day 2 as he ended Saturday just 0.019 off Bendsneyder. Fernandez’ 1:59.204 is only just over a second off the 2020 pole lap…

Two veterans came next, with Sam Lowes (Elf Marc VDS Racing Team) in ninth by just 0.007 and Joe Roberts (Italtrans Racing Team), setter of the aforementioned pole, completing the top ten by 0.034. Both have shown good pace on both days so far too, and will likely be pushing for a statement time attack on Sunday. 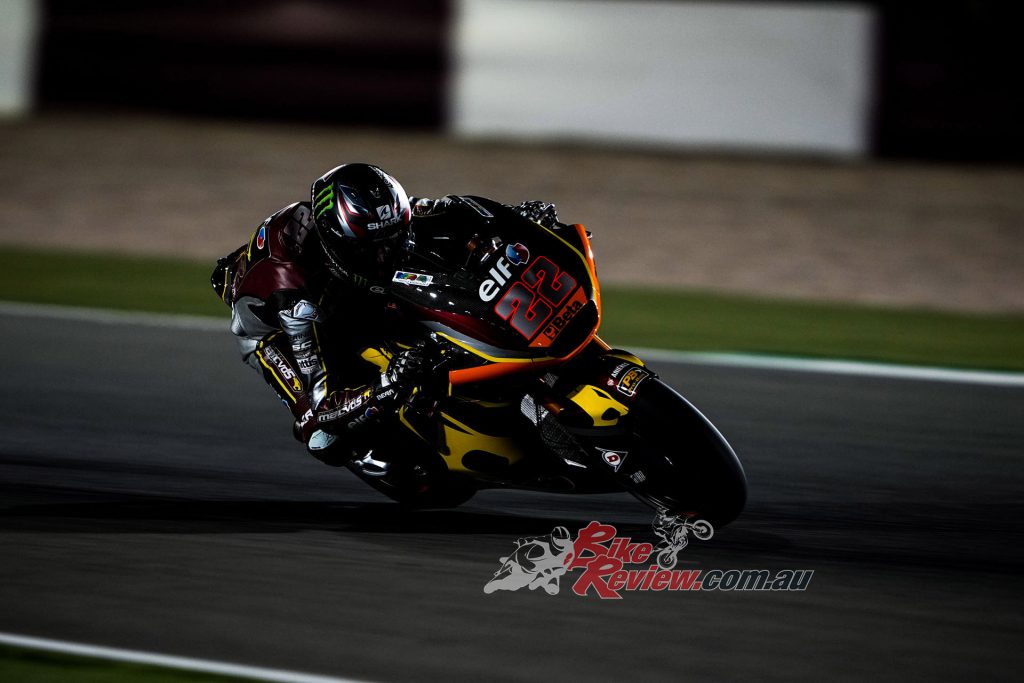 Tony Arbolino (Liqui Moly Intact GP) continued his impressive adaptation and was the second fastest rookie on Saturday, taking 11th and within 0.115 of Roberts. Augusto Fernandez (Elf Marc VDS Racing Team) slots into 12th ahead of another impressive rookie in the form of Ai Ogura (Idemitsu Honda Team Asia), the Japanese rider only another tenth in arrears.

The aforementioned Manzi ends the day in 14th as he adjusts to life at Flexbox HP 40 and on a Kalex, with Tom Lüthi (Pertamina Mandalika SAG Team) rounding out the top 15 after Day 2. Rookie American Cameron Beaubier (American Racing) leapfrogged a few of his rivals from Day 1 to take 19th and get the better of reigning Moto3™ World Champion Albert Arenas (Inde Aspar Team) by just 0.021, with the timesheets necessitating the use of hundredths or thousandths to measure the gap through almost the entire field. 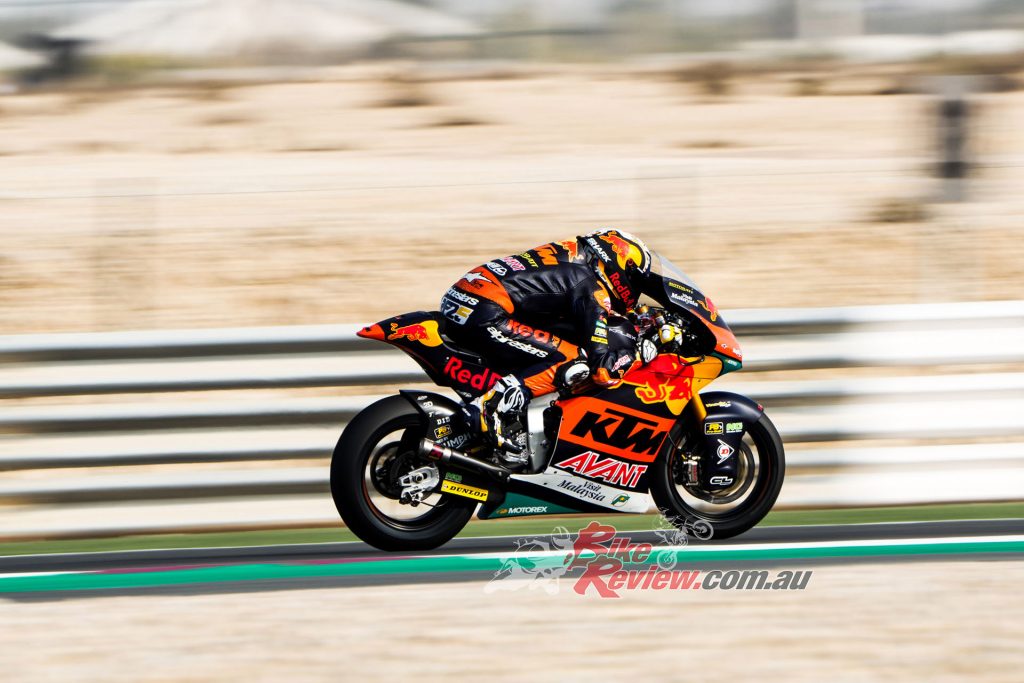 Sunday Moto2
Another day, another incredibly tight fight at the top of the Moto2™ timesheets? Yup. Sunday at the Official Moto2™ and Moto3™ Qatar Test saw Sam Lowes (Elf Marc VDS Racing Team) snatch P1 in the intermediate class, but the top three was covered by just 0.048 as Marco Bezzecchi (Sky Racing Team VR46) took second and Remy Gardner (Red Bull KTM Ajo) third. All three will likely be starting the year expecting to challenge for wins, and their tests only underlined their speed.

The conditions were fair on Sunday once again, and Lowes’ best is the quickest lap of the test as preparations continued for the coming race weekend(s). The gaps one again show we have a stunner in store, across the top three and throughout the timesheets. Lowes, Bezzecchi and Gardner will leave the test happy, and so too will Jake Dixon (Petronas Sprinta Racing) as the Brit rounded out Sunday in fourth. After a wrist injury that could have been a career-threatener, getting straight back into the top five is no mean feat. That top five on Day 3 of the test was completed by Dixon’s teammate Xavi Vierge, who was fastest on Saturday. 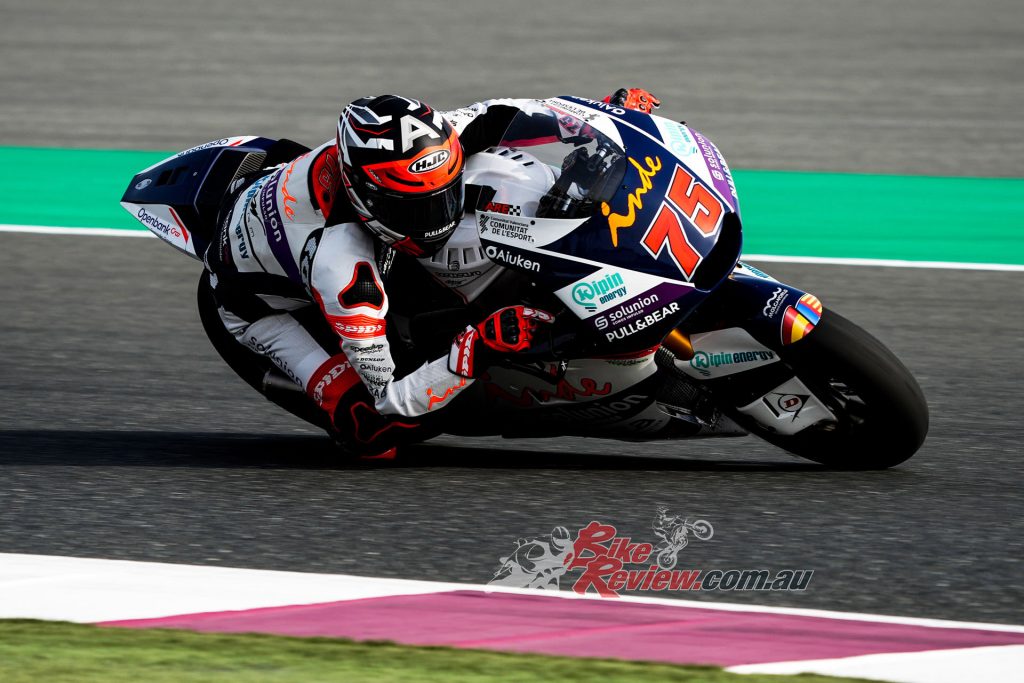 Sixth place goes to Bo Bendsneyder on Day 3 as the Dutchman continues to impress upon his move to Pertamina Mandalika SAG Team and Kalex. He was only 0.033 off Vierge as he made a late leap up the timesheets, and is another who has been consistently improving. Nicolo Bulega (Federal Oil Gresini Moto2) ends Sunday in seventh, another late to move up the timesheets but doing so in style.

Style is also a good word to describe the start of Raul Fernandez’ (Red Bull KTM Ajo) Moto2™ career. Fastest rookie throughout, the Spaniard is on course for an incredibly impressive debut race weekend. So too, now, is Albert Arenas (Inde Aspar Team) though as the reigning Moto3™ World Champion shot up into the top ten on Sunday, only 0.052 off fellow rookie Fernandez. Arenas’ teammate Aron Canet completes the top ten, sliding down from second on Day 1 and Day 2 but another with some key consistency. 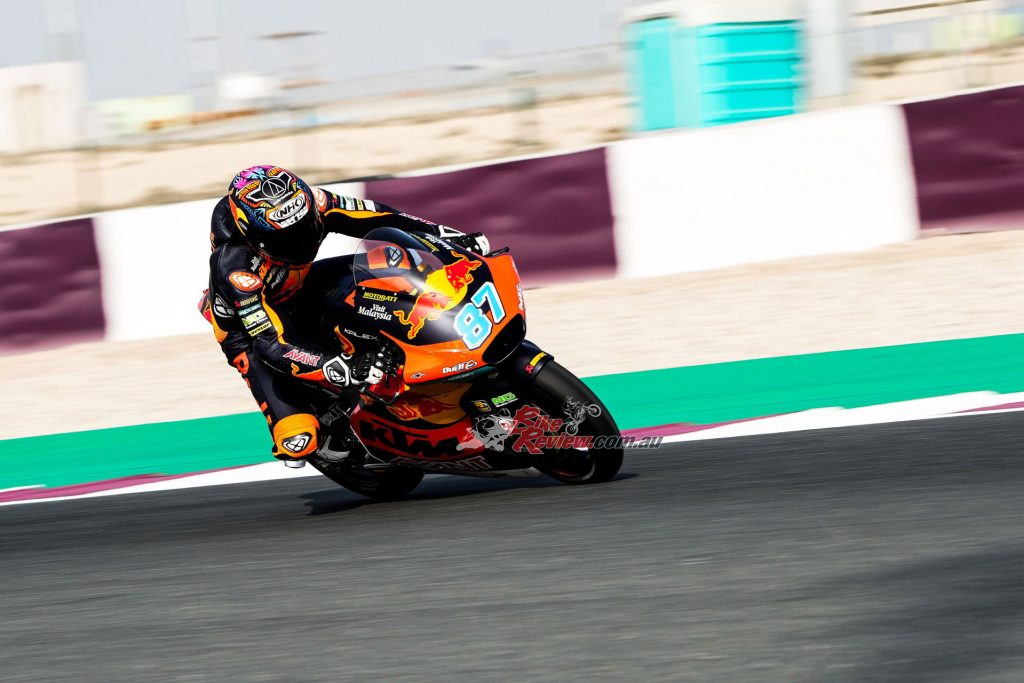 Stefano Manzi (Flexbox HP40) takes P11 by just 0.003 ahead of another impressive rookie in the form of Ai Ogura (Idemitsu Honda Team Asia), with yet another right behind him: Cameron Beaubier (American Racing). The American was only 0.016 off Ogura too… and pipped compatriot Joe Roberts (Italtrans Racing Team) by 0.011. Marcel Schrötter (Liqui Moly Intact GP) completed the fastest fifteen, just edging out rookie teammate Tony Arbolino.

That’s it from the pre-season test for the Moto2 class, with the stage well and truly set for the first race of the season. Are Lowes, Bezzecchi, Gardner and their experienced compatriots ready for battle? And can the rookies edge ever closer as practice begins? Find out on Friday as the Barwa Grand Prix of Qatar begins. And in the meantime, keep an eye out for more content from the test on motogp.com!