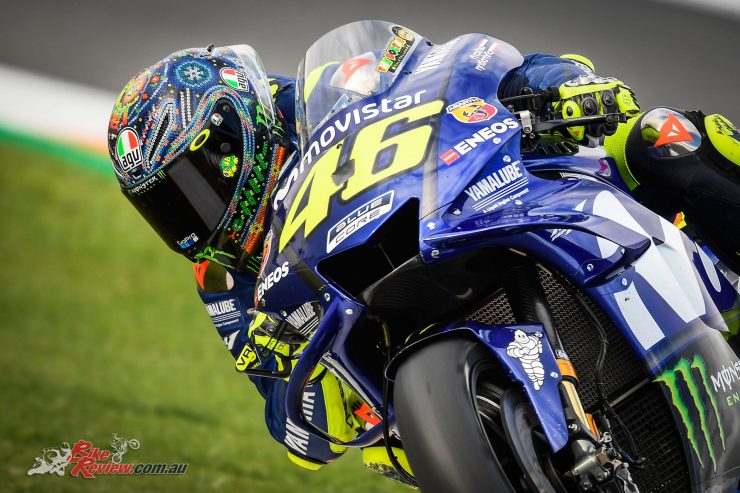 The timesheets weren’t the only headline-makers, however, as we witnessed Jorge Lorenzo (Repsol Honda Team), Johann Zarco (Red Bull KTM Factory Racing) and others get to grips with their new machines – although it was an earlier end to the day than anticipated after rain cut action short in the late afternoon. 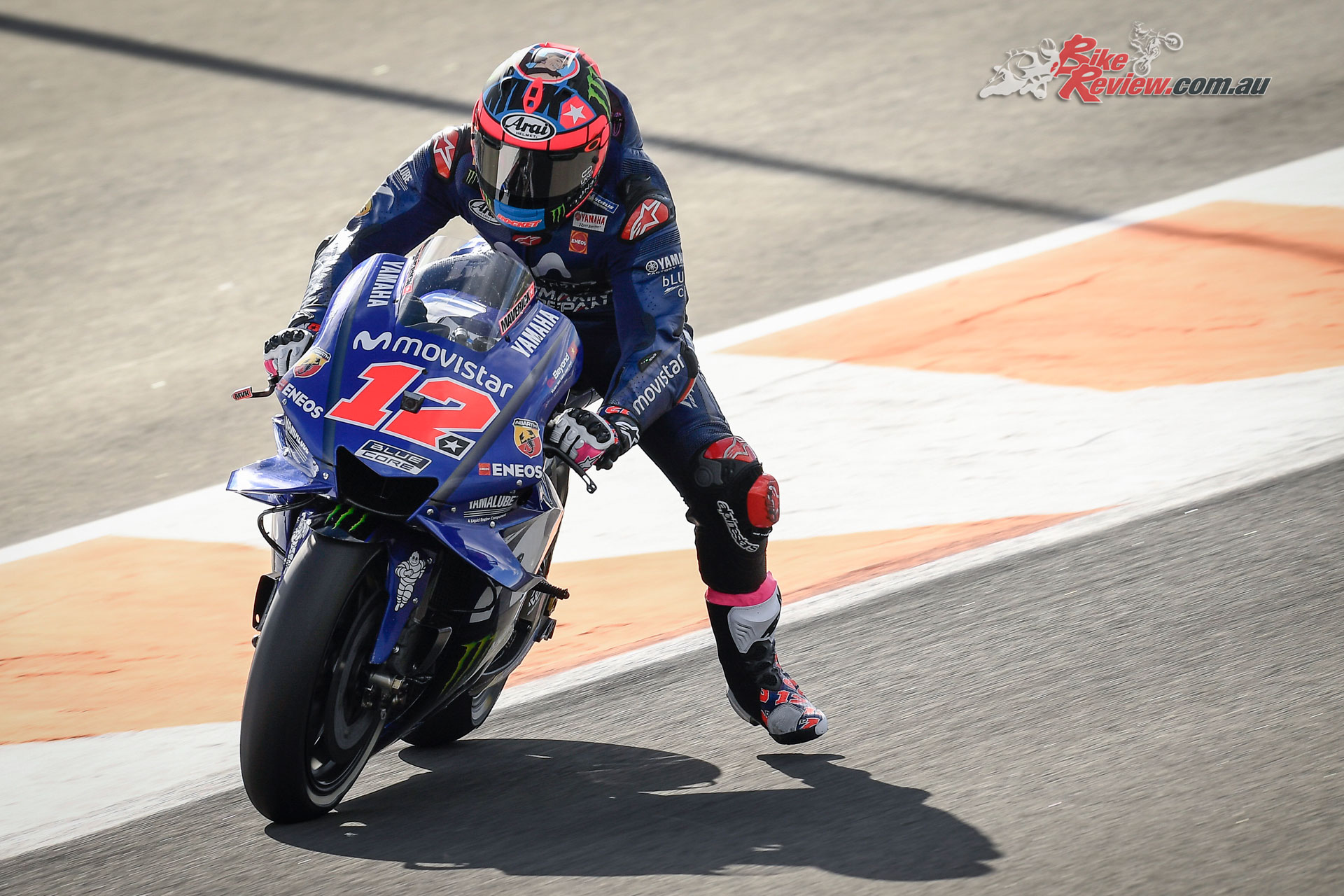 The day also began with a similar problem, with the skies dry but the track a little damp, and that delayed proceedings a little. Once it did get underway, the day ushered in a new era.

At the Repsol Honda Team, Marquez was a threat near the top for much of the day and the reigning Champion had two other black-liveried bikes in the garage – a 2019 development bike and an all-new bike for the coming season. But arguably the biggest talking point from the test was Lorenzo’s debut on an RC213V machine. 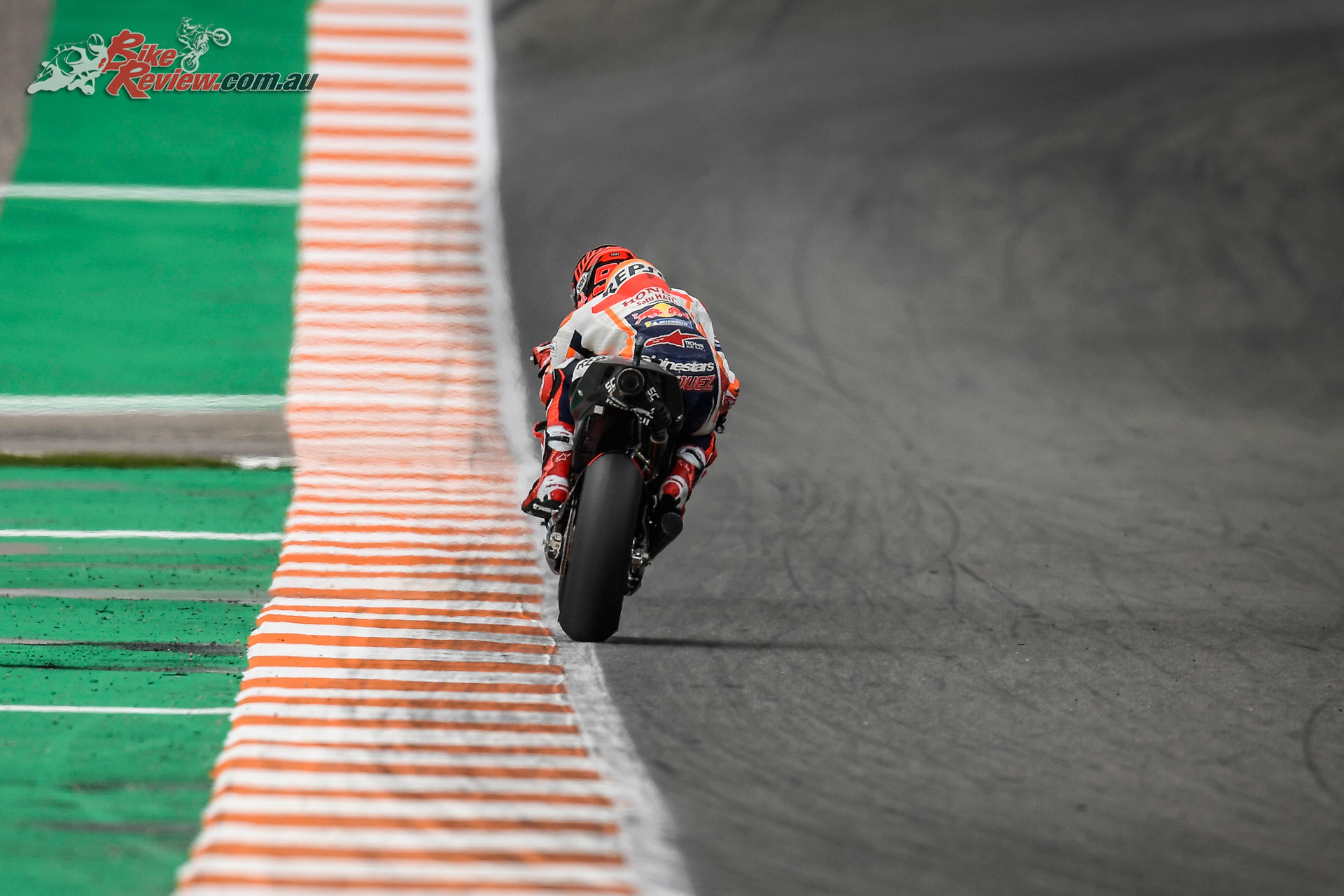 The five-time World Champion didn’t head out until around 1pm local time (GMT +1), but eventually completed 30 laps before rain stopped play at around 15:20. Still not up to full fitness after his wrist injury, Lorenzo ended Day 1 with the 18th fastest time; his 1:32.959 was 1.543 off Viñales as he begins his adaptation from Ducati to Honda.

Viñales was the later improver to take to the top. The Spaniard’s main focus was on the engine, and he began with some time on the ‘old’ bike. Then? “We changed the engine and we felt like we’d suddenly improved on the points we need to,” says the Spaniard. “I’m really happy and the direction we followed with Yamaha was the correct one. We felt much better into the corner, it’s where we needed to improve and now we’re trying to understand how to improve the acceleration. The difference is especially on the engine braking. The new engine is much better,” he adds – and he confirmed he did his fastest laptime on the new engine. 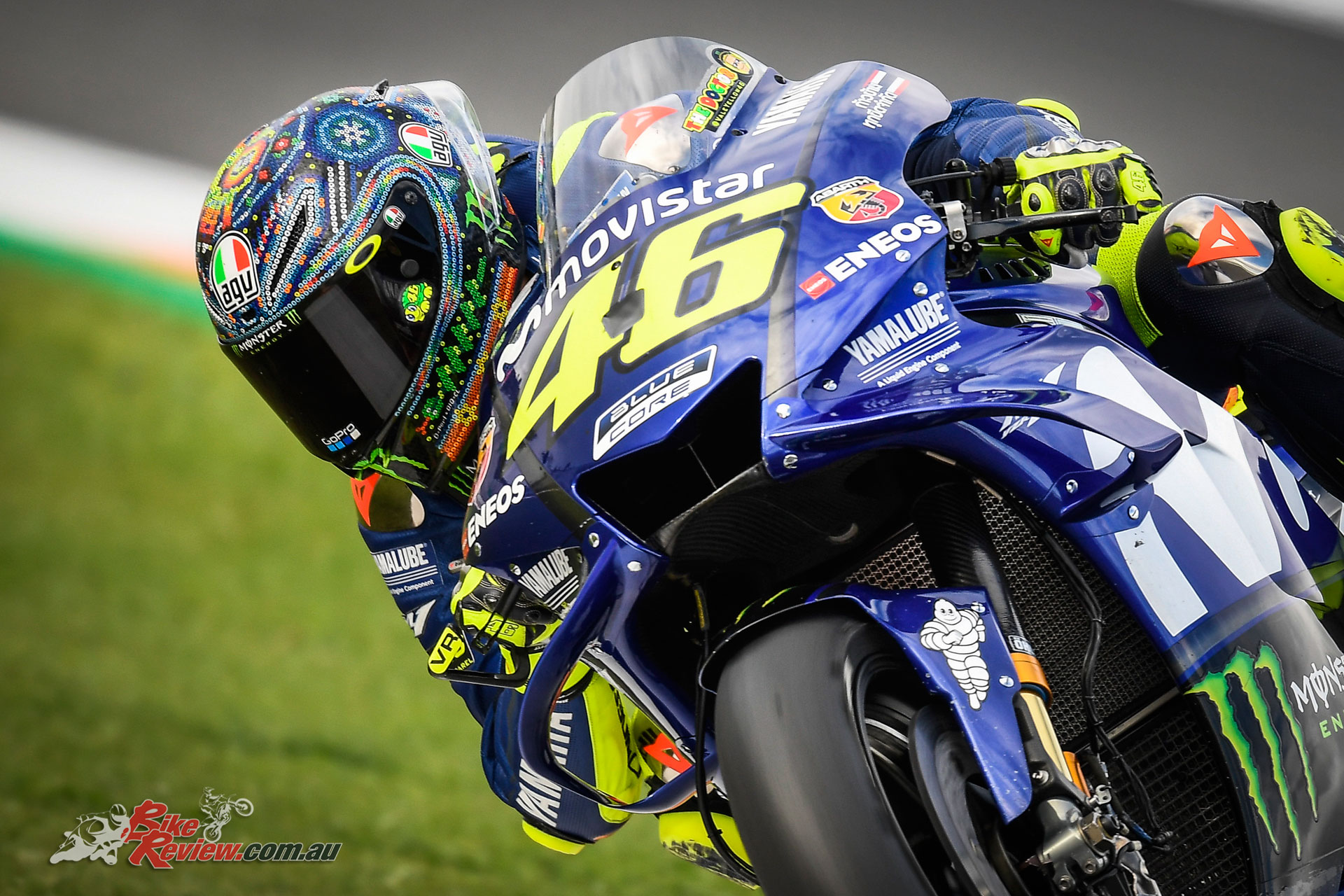 Teammate Valentino Rossi, meanwhile, was also near the top – and he had positive things to say about the engine he tried, that it stresses the tyre less. He also gave a peek of what he’ll be working on tomorrow – another spec. “Today we tried one (engine) and tomorrow we’ll try the other one, which is similar but different. Tomorrow, the most important thing is try the second spec. For me, these two tests are not crucial, but are important. We have time until next February to choose the engine, but in this test we can give a good indication to work more in one way.”

Ducati was a slightly different story, with 2017 and 2018 runner-up Andrea Dovizioso left a little frustrated after Day 1. With no dry laptimes from the weekend as a reference, the Italian worked on an updated GP18 to lay down some laps to use as a comparison for the new bike – but then it rained. 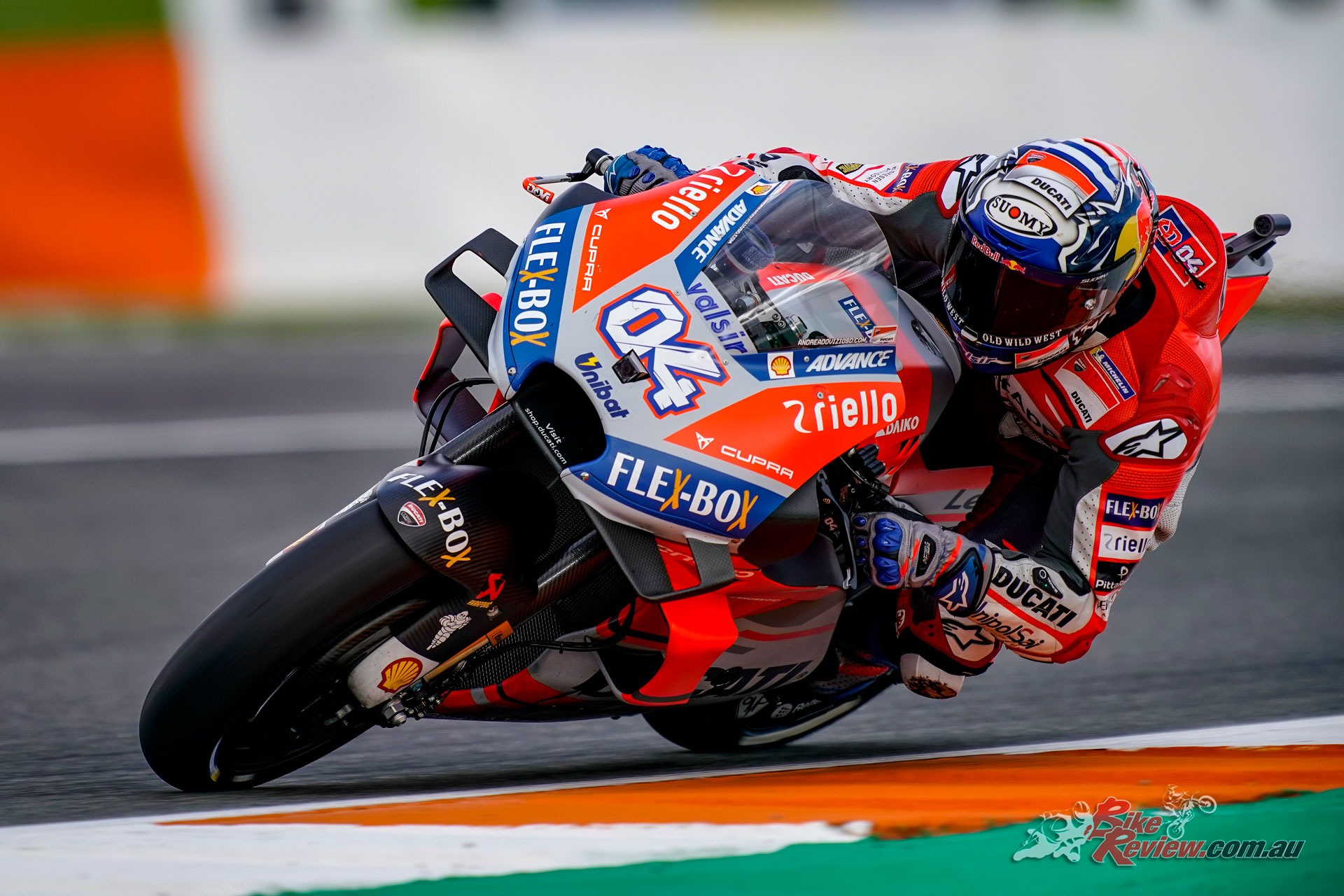 Andrea Dovizioso saying, “Unfortunately the day wasn’t very prolific because in the morning, with the track surface still partially damp, there weren’t the conditions to go out on track. We had to wait a lot, in the end we didn’t do many laps, and in addition we had to prepare a base set-up with the 2018 bike, because during the race weekend we were unable to lap in the dry. The tests we had scheduled must be done well and in a precise way, because the decisions we will take during these tests will have an effect on the definition of the bike we will use next year. We wanted to do a good back-to-back test but when we were ready, in the afternoon, it began to rain. Tomorrow morning, we hope to find the track dry and to be able to lap all day.”

Tomorrow the number 04 will be looking to get that base and then begin work in earnest if the weather proves better, but he did finish Day 1 only 0.001 off Rossi. On the other side of the garage, newcomer Danilo Petrucci described it as the first day at school as he debuts in factory colours, and had no negatives to report back. Test rider Michele Pirro, meanwhile – the only rider to crash on the opening day – headed out on a GP19 for 19 laps to set the tenth fastest time, 0.804 from the top.

Behind Dovizioso, LCR Honda Castrol’s replacement rider Stefan Bradl completed the top five after 51 laps, putting in a 1:32.015, with teammate Takaaki Nakagami (LCR Honda Idemitsu) a little further down the timesheets in P13.

In sixth came one of the most impressive performances of the day from new team on the grid Petronas Yamaha SRT. Franco Morbidelli, fresh from being crowned 2018 Rookie of the Year, was only two tenths off Rossi and using a hybrid of Johann Zarco’s former 2018 bike with a new engine from the factory. And on his first ever outing on a MotoGP machine, teammate Fabio Quartararo was able to get 38 laps under his belt to set a quickest time of 1:33.850 – 2.434 off Viñales. The biggest change? The Frenchman reported it was the power – and where he has to brake in the premier class compared to the intermediate.

Aleix Espargaro (Aprilia Racing Team Gresini) was satisfied and positive after Day 1, too. The Spaniard was working on updates and hopes the machine will be the basis of their 2019 bike, and he was up the timesheets from early in the track action and eventually finished up in P7. New teammate Andrea Iannone also took to the RS-GP for the first time. The Italian was only able to get 15 laps under his belt to as he ended the day in P19, while test rider Bradley Smith was able to get to grips with his new bike – 17 laps completed for the British rider, with a best time of 1:33.709.

Behind Aleix Espargaro and Petrucci was the hero of the hour for Red Bull KTM Factory Racing on Sunday: Pol Espargaro. The Spaniard was positive after Day 1 and ended up P9, putting in 35 laps due to the decreased track time and eager to go again tomorrow. The focus, he says, is currently on electronics – where KTM could stand to make a key gain as they aim to establish themselves as regular runners nearer the podium they took in the Grand Prix. New teammate Johann Zarco, meanwhile, reported a 50/50 day – the Frenchman said he initially struggled to find a base setting but is delighted with the feeling in the team and the factory support; another eager to head out again on Wednesday. Zarco was P17 overall, seven tenths off his new teammate.

The fastest rookie of the day was Francesco Bagnaia, who joins Alma Pramac Racing. He impressed in P11 just behind Pirro, and was focusing on simply putting in the laps and settling in. His teammate Jack Miller, meanwhile, said his new bike has almost nothing in common with the old and had positive reports – although the Australian’s day was brought to an even earlier end due to a small technical problem they’ll have rectified for Day 2. He ended the day in P14. 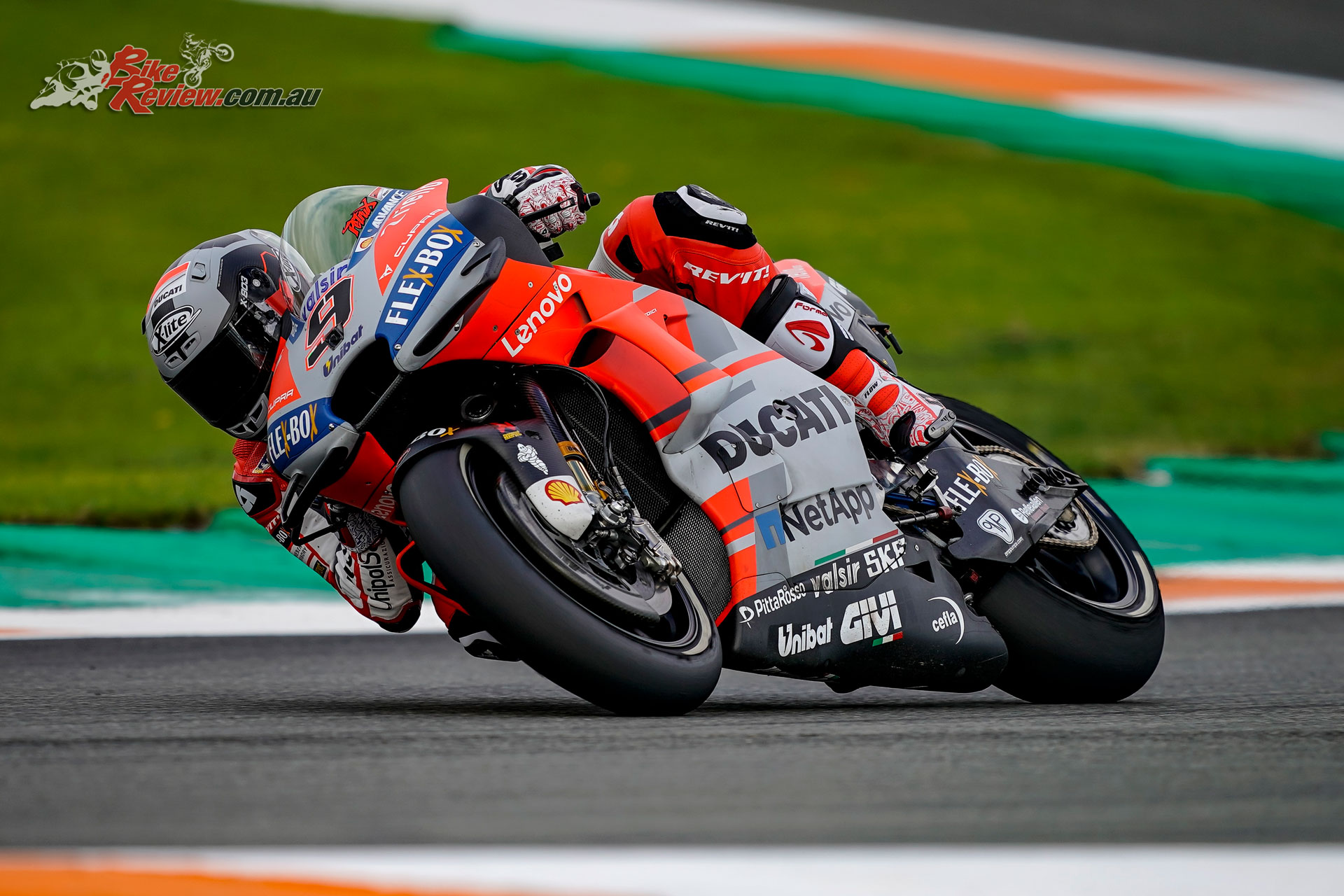 Team Suzuki Ecstar’s Alex Rins slots into P12 after Day 1. A podium finisher on Sunday, Rins was straight back to business in testing and, much like Dovizioso at Ducati and Marquez at Honda, was about to head out to begin some key work when the rain came down. The Spaniard was suited and booted to start evaluating the Hamamatsu Factory’s new engine, but that will now be a task for tomorrow. Rookie teammate Joan Mir, meanwhile, ended the day in P15 just behind Jack Miller – and only a few tenths off Rins after an impressive first day of ‘official’ experience – having briefly tested the Suzuki in Japan previously.

Just behind Mir cam Tito Rabat (Reale Avintia Racing). The Spaniard, out of action since his crash at Silverstone, said he was positively surprised how he felt on the bike and his sixteenth-place finish on the first day showed once again that the former intermediate class Champion is made of steel. His new teammate, Karel Abraham, was four tenths off him as the Czech rider moves in one leap from a GP16 to a GP18. He spent most of the day settling in, and reported he made some big changes already.

Jonas Folger (Yamaha Test Team) was another man back in action as he begins working as a Europe-based test rider for the Iwata factory. He did 30 laps on the first day and was 0.040 ahead of Quartararo. 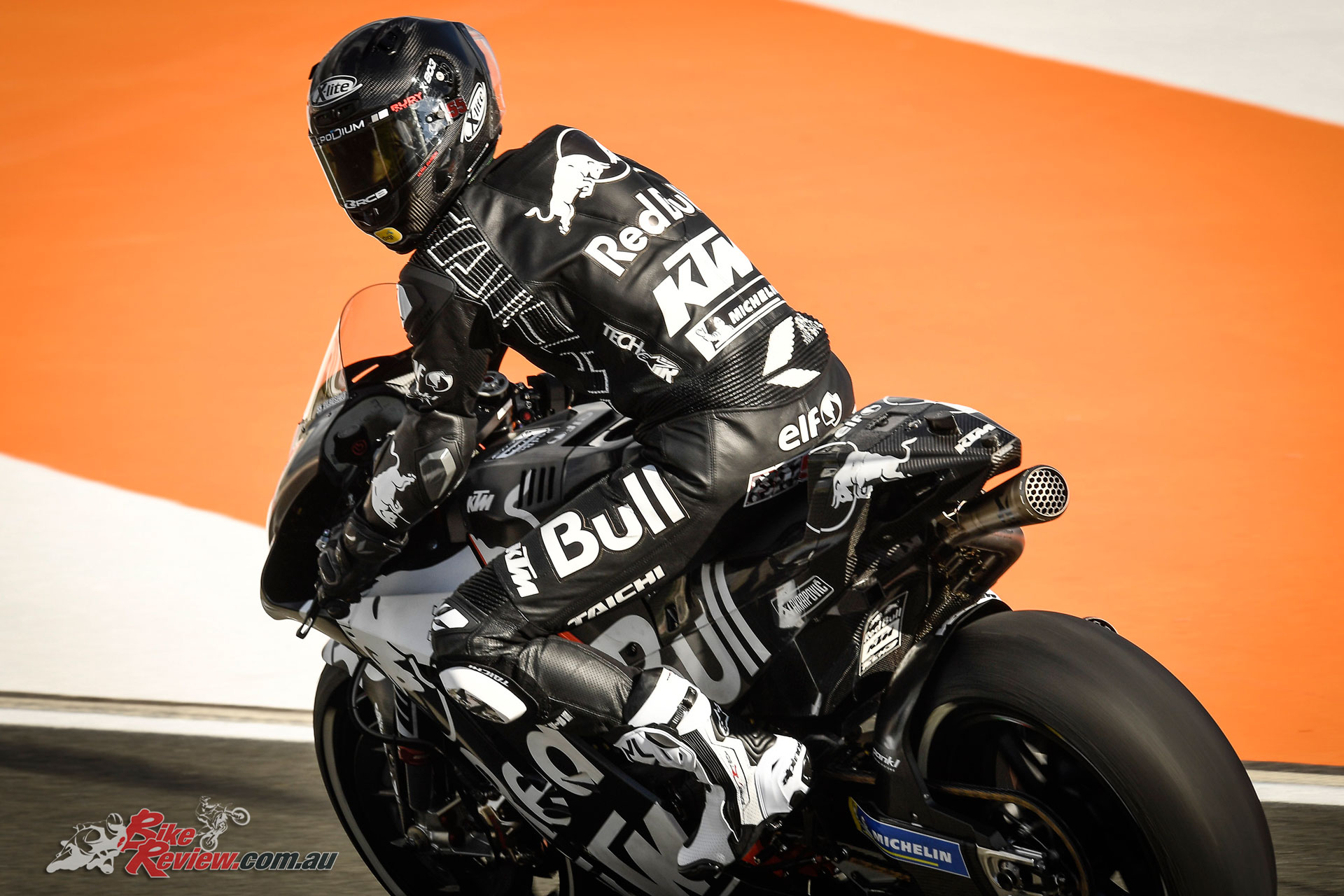 The final names on the timesheets were Hafizh Syahrin and Miguel Oliveira, who both begin new eras – as does the Tech 3 team. Beginning a new chapter with KTM, the KTM Tech 3 Racing riders put in 20 and 33 laps respectively as the Malaysian adapts from the Yamaha and Oliveira adapts from Moto2. 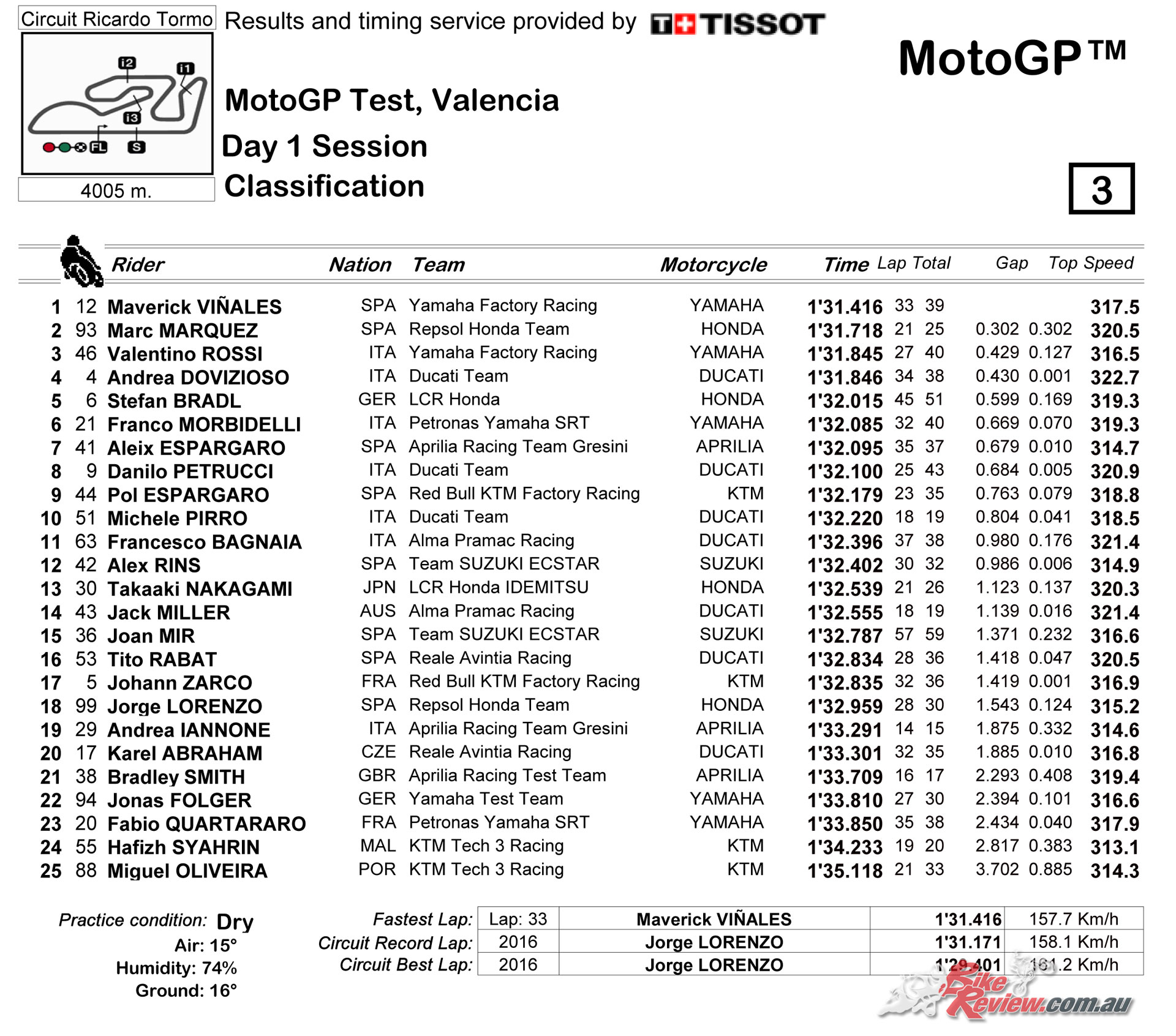