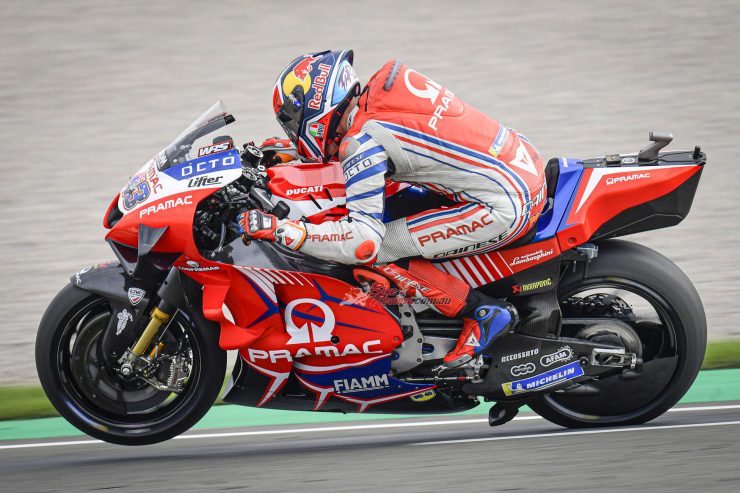 Jack Miller (Pramac Racing) made it two Fridays on top in a row at the Gran Premio Motul de la Comunitat Valenciana, the Aussie fastest in FP2 to pip Takaaki Nakagami (LCR Honda Idemitsu) by less than a tenth. Francesco Bagnaia (Pramac Racing) completed an all-Independent Team rider top three, still within 0.120 off his teammate at the top. The top 19 on Friday were covered by just under three-quarters of a second. 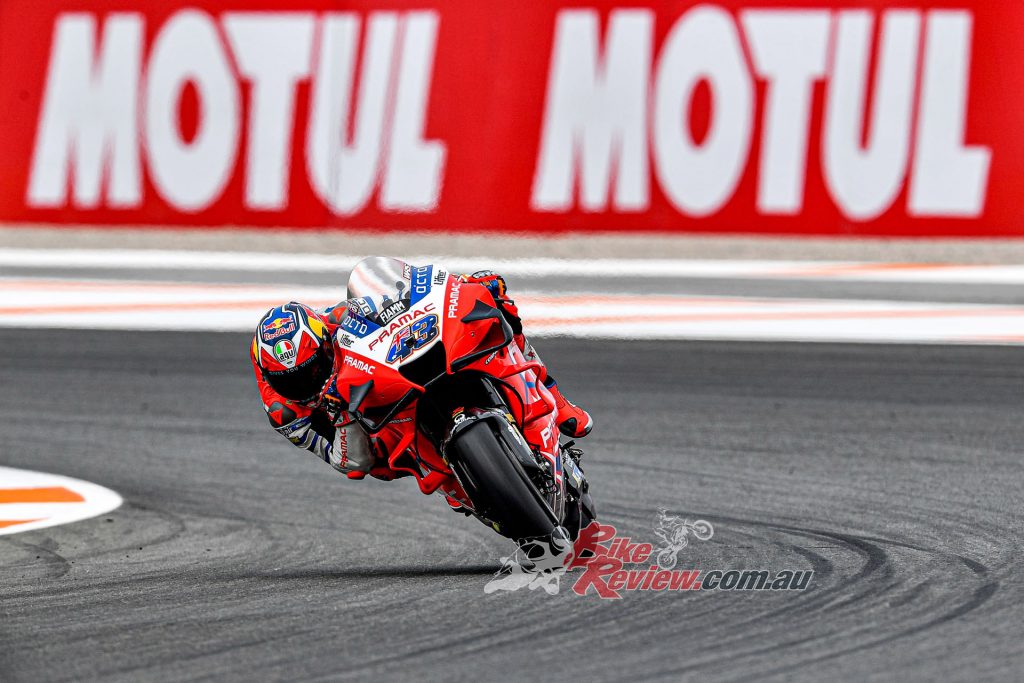 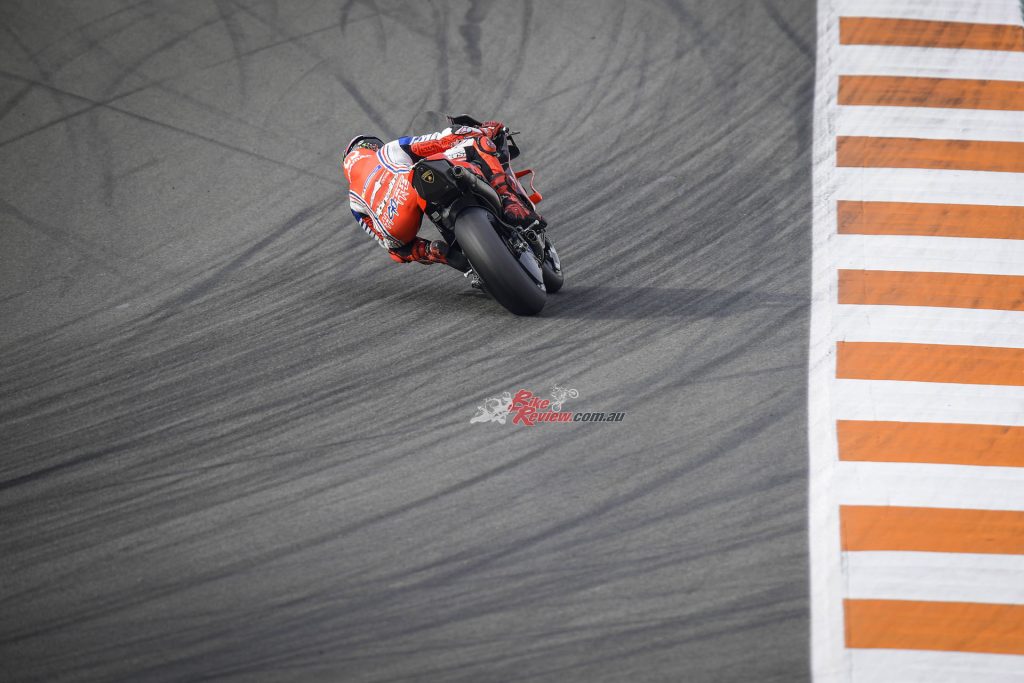 FP1
After getting so close to the podium last weekend, it was Nakagami out the blocks quickest to top in FP1 as the Japanese rider ended the session just over a tenth ahead of Franco Morbidelli (Petronas Yamaha SRT). Maverick Viñales (Monster Energy Yamaha MotoGP) made it a Yamaha duo on the chase, improving late on to move up to third. 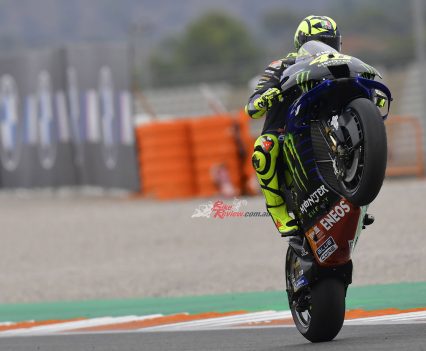 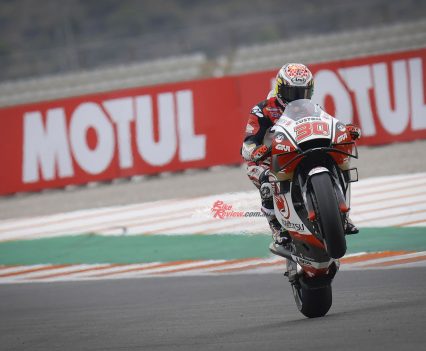 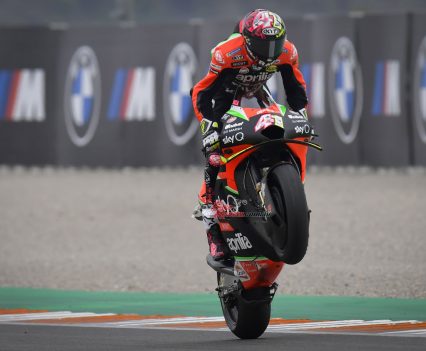 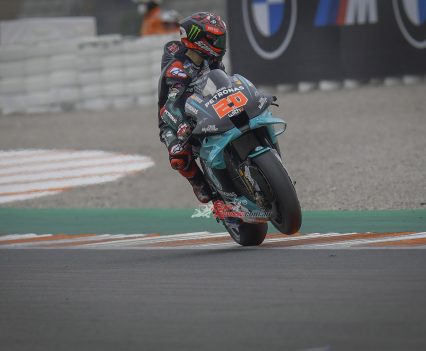 With the weather dry and not too cold, a huge improvement on a tough Friday at the European GP, the riders were down to business straight away. Morbidelli set the early pace with a 1:30.944, a substantial margin quicker than the race last Sunday. Nakagami then went fastest with just over 20 minutes to go, and he stayed there for the remainder of FP1, Viñales the only one making a decisive late move as he took third – and he’s out from under the cloud of the pending pitlane start that he dealt with last weekend. 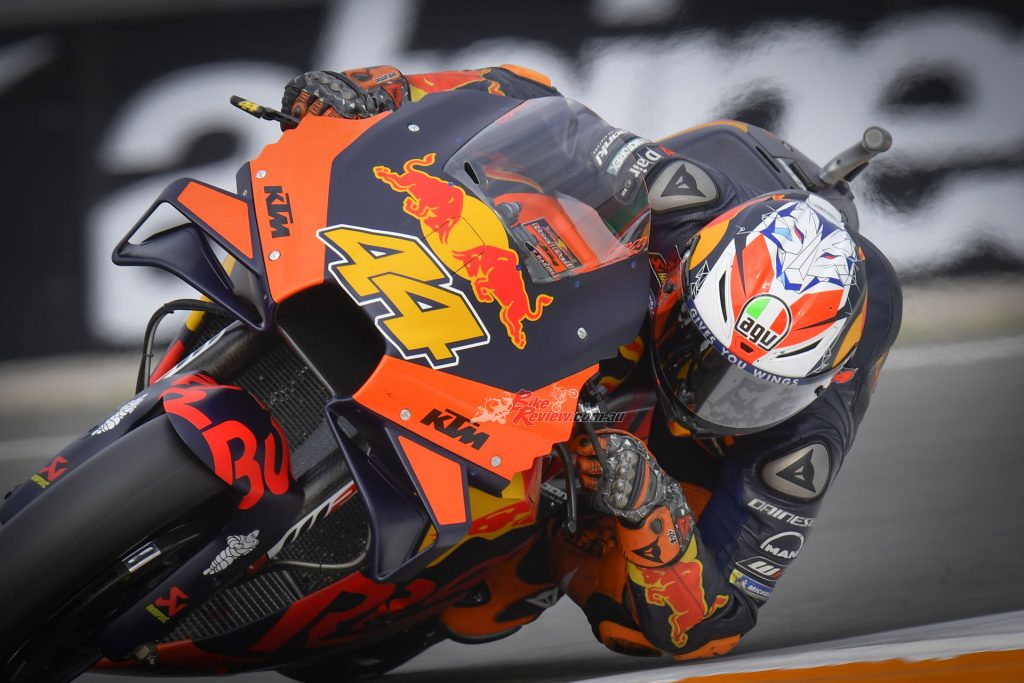 Pol Espargaro (Red Bull KTM Factory Racing) and Aleix Espargaro (Aprilia Racing Team Gresini) rounded out the top five, with 0.341 covering the leading quintet. There were no crashes in FP1.

Mir was eighth, starting the day ahead of both of his closest challengers. Rins was 11th in FP1, whereas Quartararo was P16. Miller was 12th. 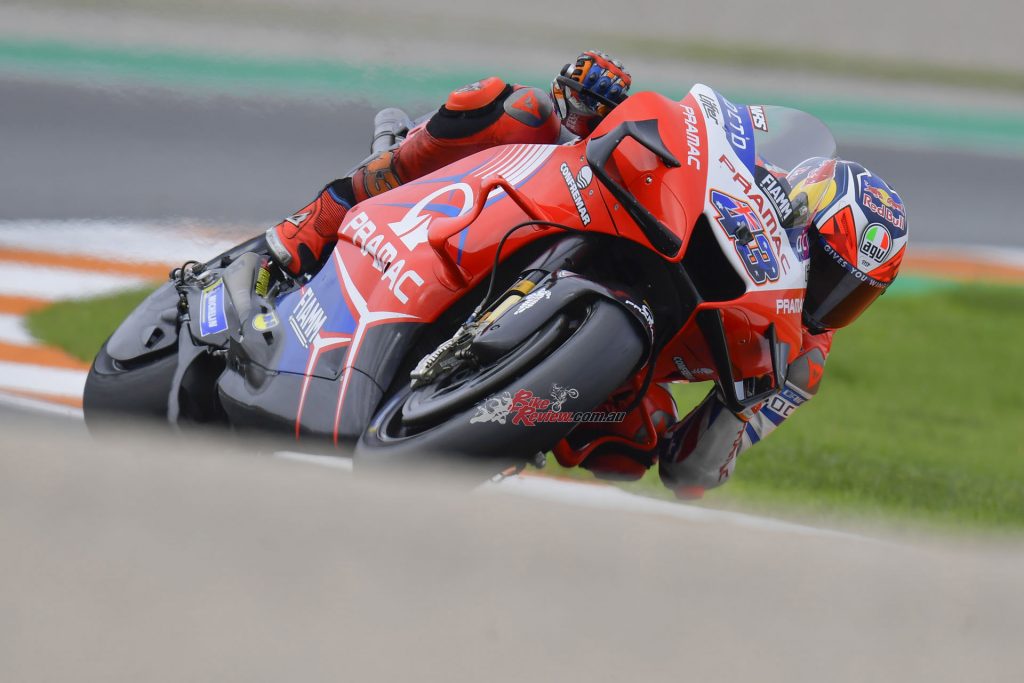 FP2
Jack Miller moved from 12th to first in the afternoon, just ahead of Nakagami as FP1’s fastest man kept his presence at the top consistent. The afternoon also saw Bagnaia strike to take over in the top three, part of an impressive Ducati showing led by Miller.

The session began with an immediate flurry of fast times as yet more dry track time greeted the premier class, with Johann Zarco (Esponsorama Racing) leading the early stages of the afternoon session from Mir. These laps saw the Frenchman and Spaniard go fifth and six on the combined times to get within three tenths off Nakagami’s pace from FP1. Plenty of riders went quicker in the first half of the session though, and there was plenty left to play. But Miller was on a charge. 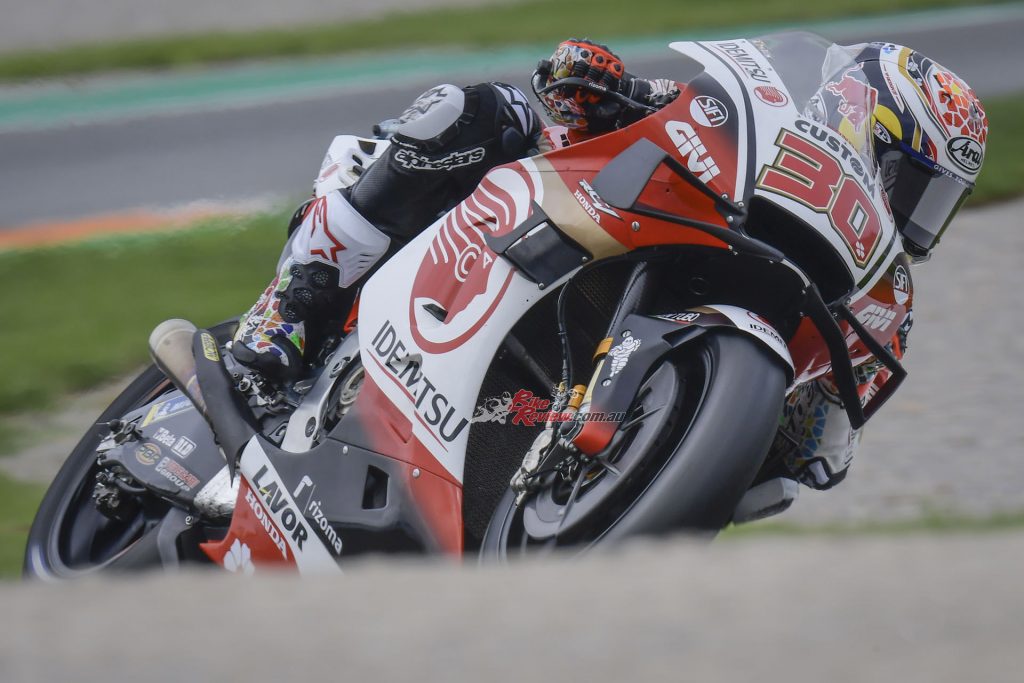 Nakagami was the first to really raise the stakes. On the soft rear, the Japanese rider put in in a 1:30.713 to go two tenths clear on the combined times, and 0.340 clear in FP2. Fellow Honda rider Alex Marquez (Repsol Honda Team) wasn’t faring so well though. After a crash at Turn 2 early on, the number 73 was down again – this time at Turn 4. T4 then also bit someone else: Mir. The Championship leader suffered a rare crash at the left-hander, but he was able to get back out in the session.

The timesheets were still changing. Rins shot up to sixth before going better again as Andrea Dovizioso (Ducati Team) joined fellow Ducati rider Zarco inside the top three. Pol Espargaro then shoved the Italian down to P4 but it was all happening with just over a minute to go. Next to move up was Bagnaia, into second. Finally, Miller struck. The Aussie was flying and took over at the top as the chequered flag waved. Typical Miller style. 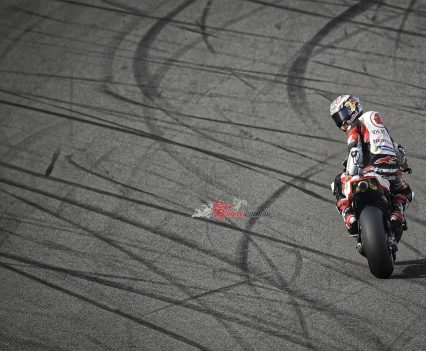 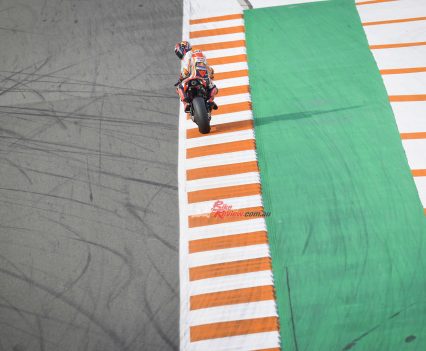 Overall, that means Miller leads the premier class field on Friday, ahead of a consistent performance from Nakagami as he slots into second. Bagnaia joins his teammate in the top three; the Italian P19 after FP1 and making a big leap up the timesheets. Go Jack Miller!

European Grand Prix polesitter Pol Espargaro ends Day 1 in P4, staying inside the top four and another consistent performer on Friday. Zarco’s handy FP2 sees the Frenchman finish Friday in P5, moving up from a P6 finish in FP1. Dovizioso took sixth by the end of play, ensuring there are four Ducatis in the top six on an improved Day 1 for the Borgo Panigale factory. Miller top Ducati again. 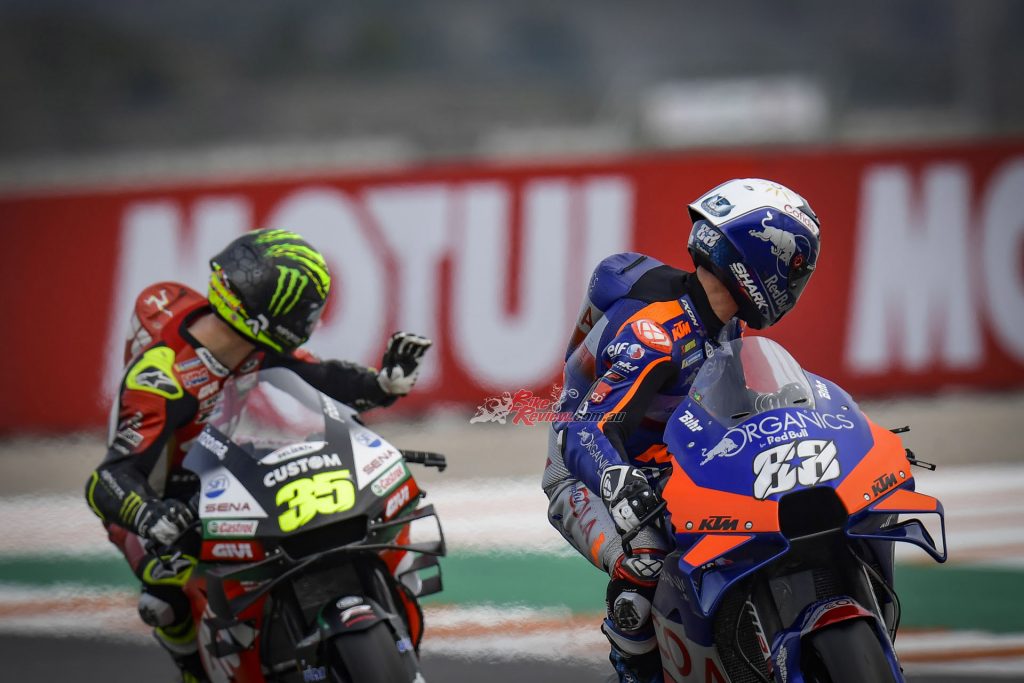 Cal Crutchlow (LCR Honda Castrol) claimed P7, demoting Morbidelli as the Italian ends the day in P8. He was one of only two to to not go quicker in the afternoon, the other being Maverick Viñales as he took tenth. Rins finished ninth to split the Yamahas on the combined timesheets.

Aleix Espargaro (Aprilia Racing Team Gresini) was P11 on Friday, ending the day just ahead of Mir as the Championship leader got shuffled down to P12. Add in a crash and it’s not going all his way so far, although with Rins not too far ahead and Quartararo in P16, it could be worse. 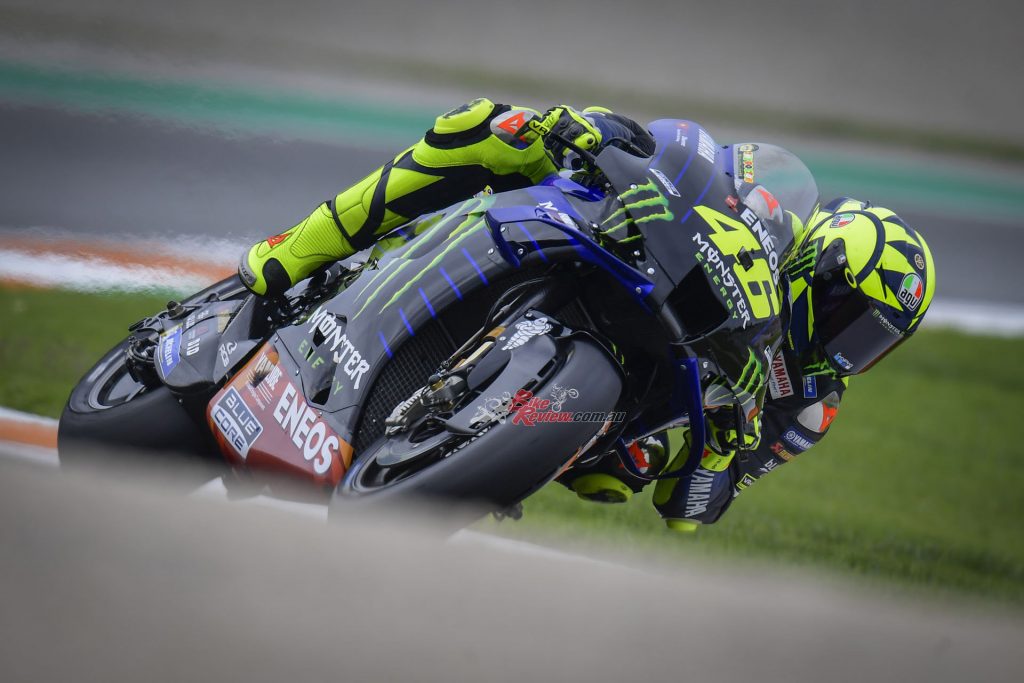 Valentino Rossi (Monster Energy Yamaha MotoGP) ended Friday in P18 after a tougher day at the office, with an identical laptime to Alex Marquez as the rookie also looks for more on Saturday. All eyes on Jack Miller for the Aussie fans.

Moto2
Jorge Navarro (MB Conveyors Speed Up) narrowly took to the top on home turf on Friday, beating Championship contender Luca Marini (Sky Racing Team VR46) by just 0.025 on Day 1 of the Gran Premio Motul de la Comunitat Valenciana. Fabio Di Giannantonio (MB Conveyors Speed Up) completed a top three split by just 0.038. Title contender Sam Lowes (EG 0,0 Marc VDS) was fourth and within 0.102, with points leader Enea Bastianini (Italtrans Racing Team) starting the weekend off in sixth but only 0.157 down despite a crash as the timesheets tightened in Valencia. 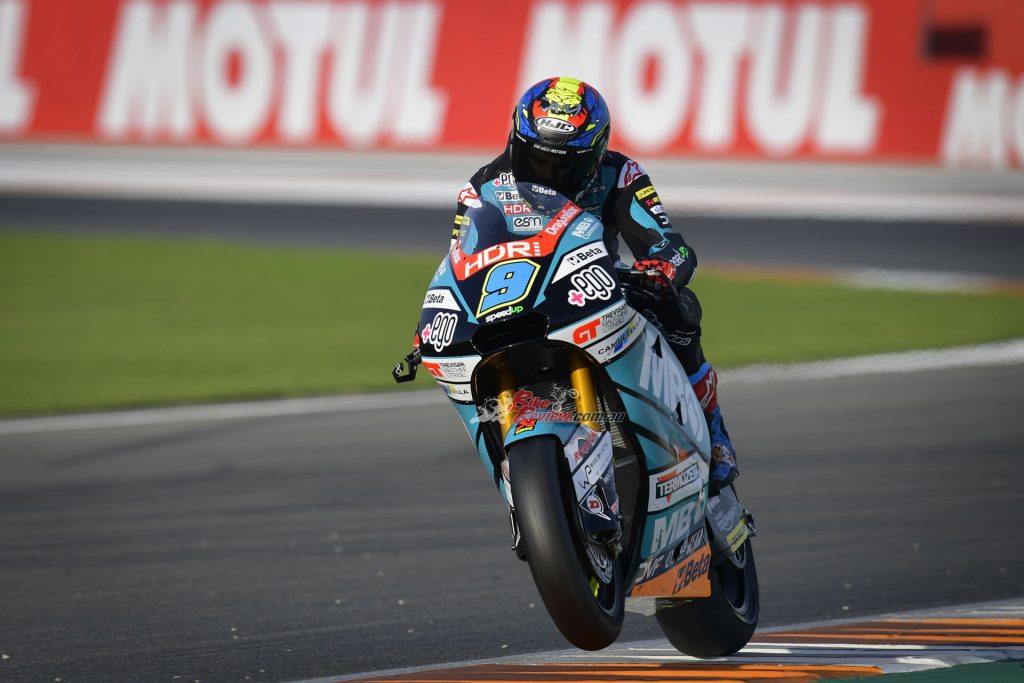 FP1
The day began with Navarro in charge ahead of Marini, with the Spaniard only half a second off his own lap record as action got underway again in Valencia. ‘Diggia’ made it the same top three in the morning as overall too, although the number 21’s fastest in FP1 wouldn’t quite be his quickest of the day.

Lowes slotted into fourth, ahead of a solid opening session from Marcel Schrötter (Liqui Moly Intact GP) as the German homed in on the top – fifth but still within a tenth and a half of Navarro’s quickest lap. Bastianini started the day ninth but only a quarter of a second off the top, with Moto2™ tight as ever. Somkiat Chantra (Idemitsu Honda Team Asia) was the sole crasher in the morning, rider ok.

FP2
In the afternoon, ‘Diggia’ hit back to top the timesheets, with Lowes moving up into second but just 0.090 off. Bastianini was only 0.029 off his closest title rival as he took third too, with Marini the title hopeful to get shuffled back as he ended FP2 in P8.

Overall it’s a shuffle between the two sessions. Navarro’s FP1 time leads the way ahead of Marini’s morning effort, with Di Giannantonio third overall from his session-topping FP2 lap. Lowes and Schötter slot into fourth and fifth by virtue of their fastest efforts from FP1.

Bastianini ends the day in sixth from his FP2 laptime, although the Italian took a tumble at Turn 6 in the afternoon. Hector Garzo (Flexbox HP 40) is seventh as the second home hero on the timesheets impressed once again. Bendsneyder’s afternoon lap slots him into eighth, ahead of Inde Aspar Team Moto2’s Aron Canet as he builds back up following injury. Lorenzo Baldassarri (Flexbox HP 40) completed the top ten.

Moto3
Tony Arbolino (Rivacold Snipers Team) set a new lap record at the Gran Premio Motul de la Comunitt Valenciana to head the combined timesheets on Day 1, the Italian’s last stand starting on a high. Jaume Masia (Leopard Racing), another trailing some points if he’s to stay in title contention for the season finale, was second quickest, with Europe GP podium finisher Sergio Garcia (Estrella Galicia 0,0) completing an all-Honda top three on Friday. They were within 0.083, with Deniz Öncü (Red Bull KTM Tech 3) keeping the top four within less than a tenth as the Turk ended the day 0.098 off the top. 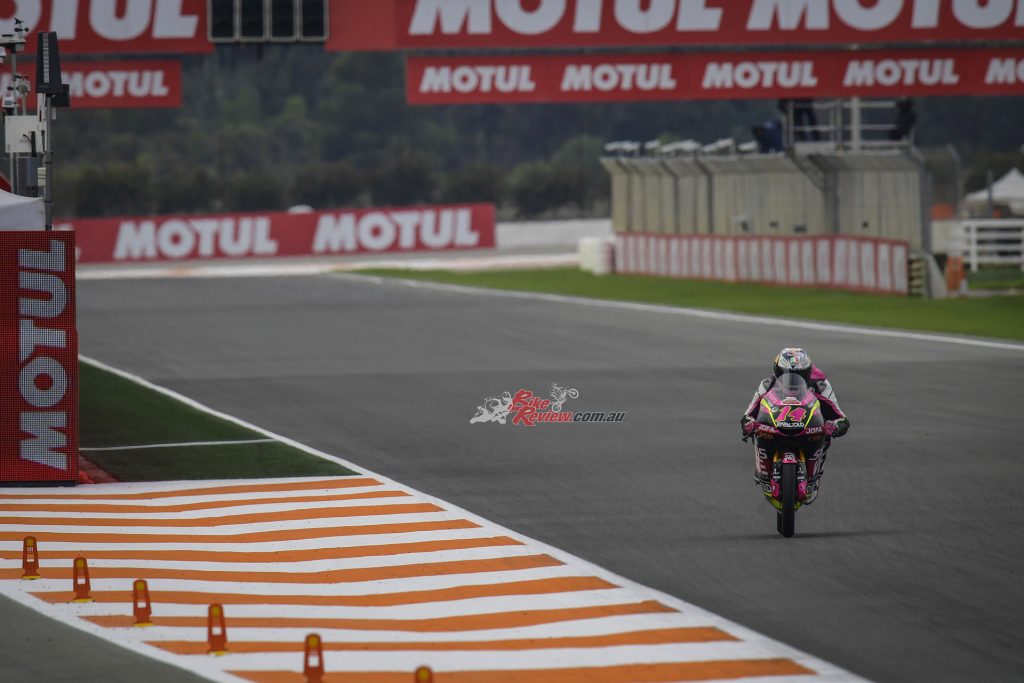 By the end of play, all the key players in the title fight had a provisional place booked in Q2 – except Championship leader Albert Arenas (Gaviota Aspar Team Moto3). He ended the day in 15th and will be hoping the heavens don’t open on Saturday morning.

FP1
In FP1 it was Tony Arbolino in control, as the Italian setting his new lap record early in the weekend. His 1:38.413 edged out Öncü by 0.098, the Turkish rider starting his weekend in second despite a heavy crash at Turn 6 earlier in the session. Romano Fenati (Sterilgarda Max Racing Team) completed the top three.

With weather vastly improved on seven days ago, the Moto3™ riders took full advantage and the session was a busy one. Rounding out the top five were Jeremy Alcoba (Kömmerling Gresini Moto3) and European GP winner Raul Fernandez (Red Bull KTM Ajo), with the top two in the title fight a little further back: Championship leader Albert Arenas was 12th in FP1, just ahead of main rival Ai Ogura (Honda Team Asia), who trails him by just three points.

The bigger drama in the session was two-fold: one was an incident for Sky Racing Team VR46 teammates Celestino Vietti and Andrea Migno, who crashed together at Turn 10 after Vietti highsided and Migno was left with nowhere to go – riders ok. Filip Salač (Rivacold Snipers Team) was taken to the medical centre and later to hospital as well for some check-ups after a heavy crash. He was declared unfit for a chest injury.

FP2
Masia topped FP2 from Garcia, with SIC58 Squadra Corse teammates Niccolo Antonelli and Tatsuki Suzuki also within less than a tenth of the top. Within another tenth were Fernandez and Ogura, with the timesheets considerably tighter on take two at Valencia. There were no crashes in the afternoon, and the combined timesheets are a mi of the morning and afternoon times.

Arbolino stays first by virtue of his FP1 lap record, closely followed by Masia and Garcia as the top two in FP2 complete the top three overall. Öncu and Fenati complete the top five from their times in FP1. Antonelli and Suzuki are sixth and seventh respectively from their afternoon bests, and they’re split by a single thousandth. Europe GP winner Fernandez takes eighth, ahead of Championship challenger Ai Ogura in P9. Alcoba completes the top ten from his fastest lap in FP1.

Title hopeful Vietti was 11th quickest from his FP2 time, the Italian bouncing back from his crash in the morning, with rookie Yuki Kunii impressing to put his Honda Team Asia machine into P12 overall on Friday. Compatriot Kaito Toba (Red Bull KTM Ajo) was P13 by just 0.008, with Migno only another 0.002 behind him as currently the last man set to move through to Q2.

That leaves Arenas down in 15th on Friday and looking for more, although the Championship leader was only 0.011 off an automatic place in the second qualifying session. Will the rain come down on Saturday morning and send him through Q1? Tune in at 10:00 (GMT +1) to find out in FP3, before qualifying from 13:15.