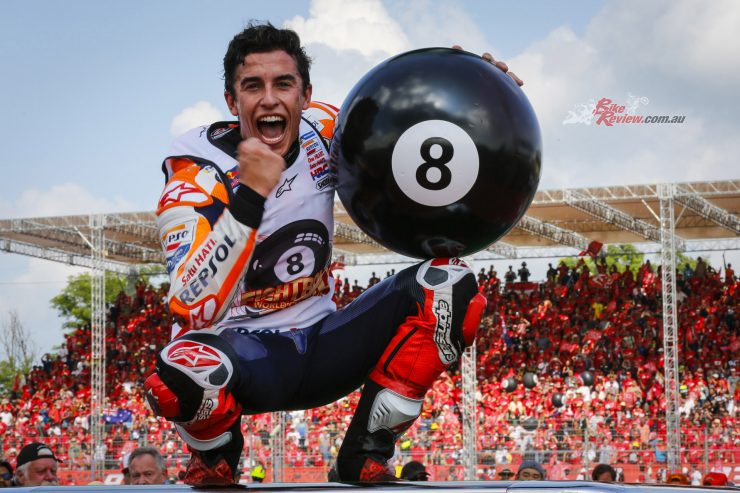 Marc Marquez (Repsol Honda Team) was crowned an eight-time World Champion as he took victory in the PTT Thailand Grand Prix, but it was far from easy going as rookie sensation Fabio Quartararo (Petronas Yamaha SRT) once again took the reigning Champion to the wire on race day. The two were locked together on each and every lap, with the final corner deciding it all as Quartararo hit attack mode and dived up the inside, but Marquez kept the better of him. Behind the two, Maverick Viñales (Monster Energy Yamaha MotoGP) completed the podium. Pics: 2Snap 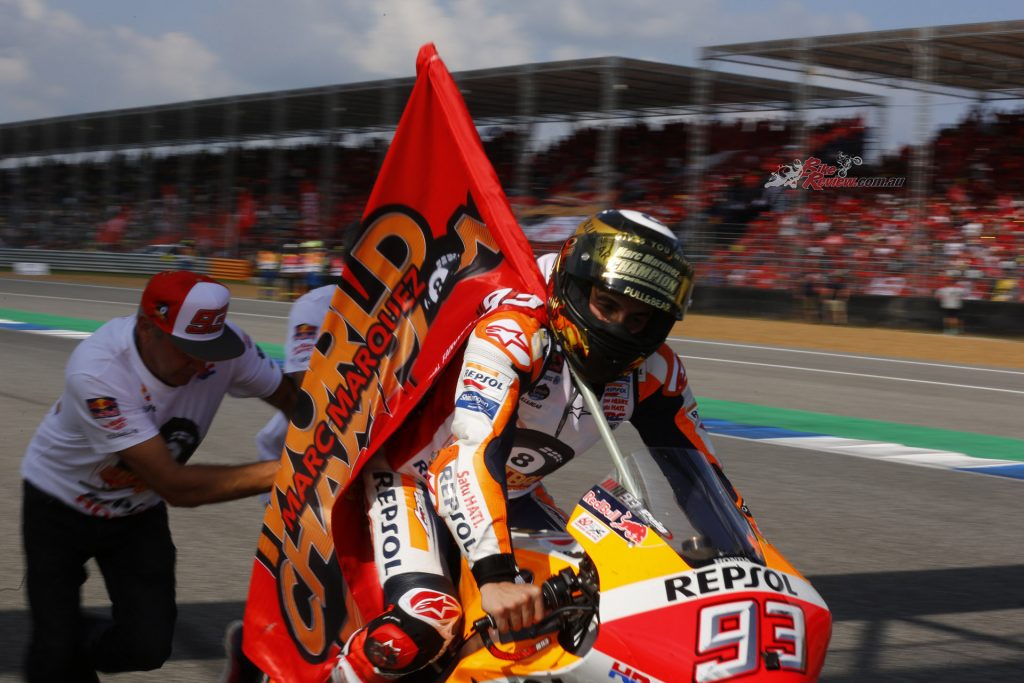 It was Quartararo who kept the lead from pole as the lights went out, with Marquez on his tail from the off as Viñales lost a place off the line. Andrea Dovizioso (Ducati Team) did the opposite and shot through the pack, up from seventh on the grid to muscle his way into P4 straight away – first mission accomplished. Despite the start though, Marquez, Quartararo and Viñales started to pull away, with the number 12 particularly keen to make a move on Marquez. Not long after, however, the front two also started to drop Viñales. 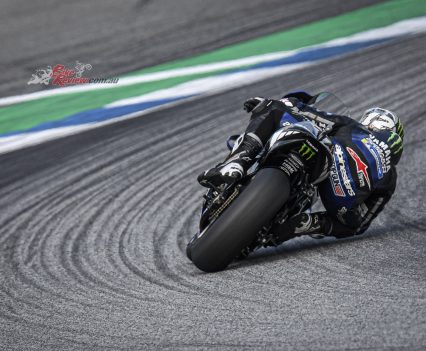 Riders will be off to the Red Bull Ring next round on August the 8th. Be sure to tune into this exciting race. 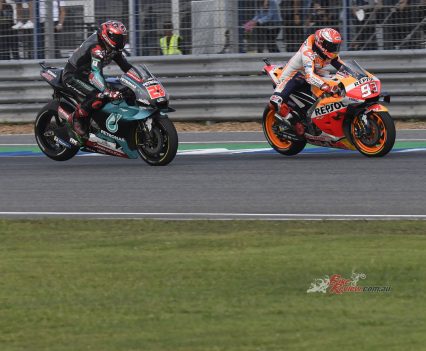 Dorna say the FIM MotoGP World Championship looks forward to returning to race in front of the incredibly passionate Buriram crowd in 2022.

Trying to attack Quartararo early doors, Marquez had run slightly wide and from then on, the reigning Champion seemed more content to sit behind the rookie Frenchman – just as he did at Misano. Sometimes further away, sometimes a little closer…sometimes seeming to fade and then suddenly pulling the pin to move back in, Marquez stalked his prey lap after lap.

Viñales couldn’t stay with the pair, and as they moved on to the final lap it was set in stone as another rookie-reigning Champion duel. And the ball was in the reigning Champion’s court, with Marquez trailing the Frenchman as he had all race. But he struck early, where he’d feinted the move a few laps before, outbraking Quartararo at the end of the back straight. Now, it was all on the rookie. Could he stay with him? Could he attack back? 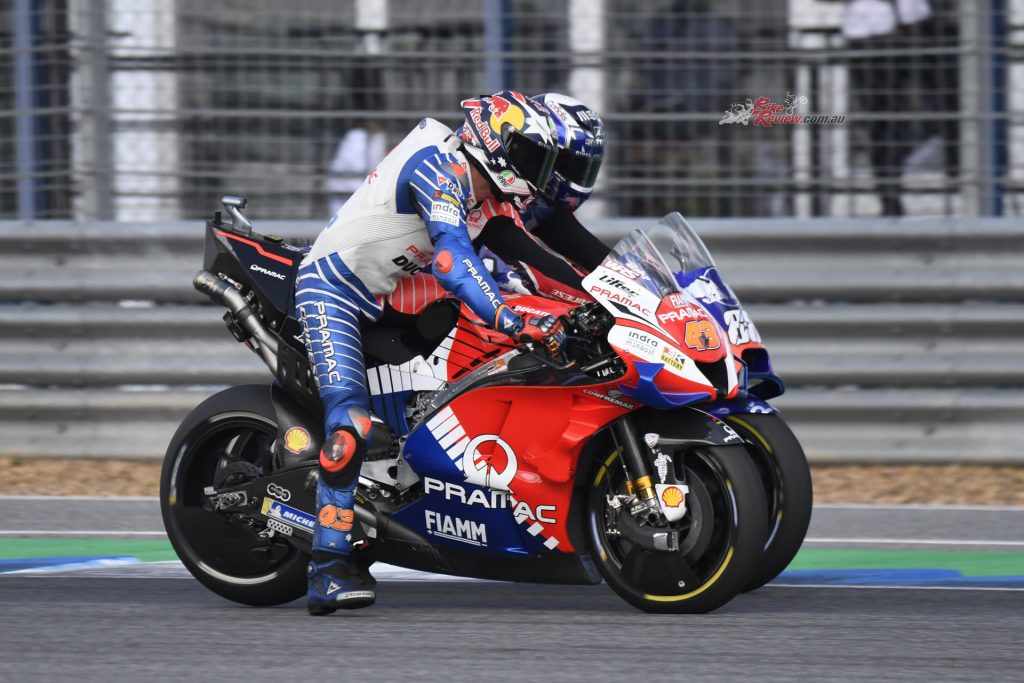 Throughout the lap the Yamaha was making up the distance on the Honda in the lead, and blasting down towards the final corner it seemed he was close enough. Sure enough, ‘El Diablo’ pulled out, back wheel in the air as he dropped anchor, slamming it up the inside…but Marquez was ready. The number 93 cut back and gassed it towards the line, just able to stay ahead to take the win and a stunning eighth world title, his sixth in the premier class.

Quartararo, meanwhile, was left with another second place – but he was closer than last time, and will surely be closer again… 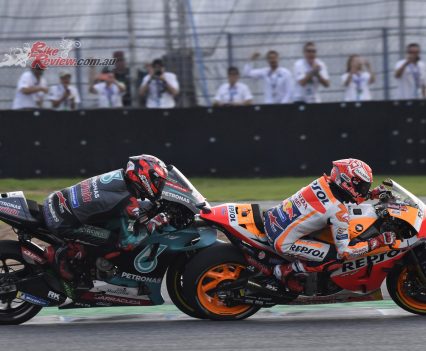 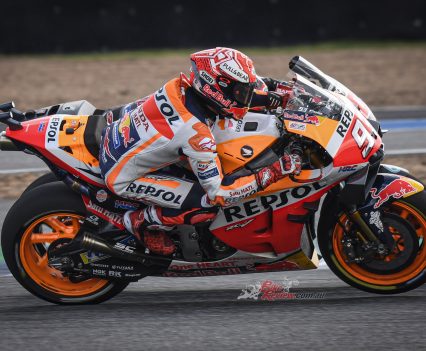 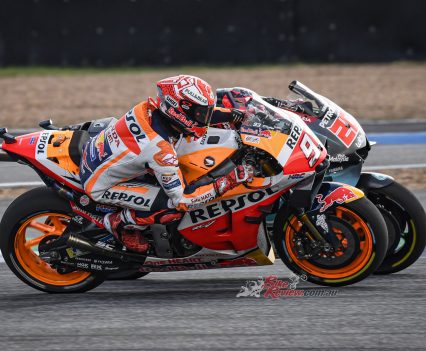 Dorna say the FIM MotoGP World Championship looks forward to returning to race in front of the incredibly passionate Buriram crowd in 2022.

Viñales completed the podium after another solid but ultimately lonely race, not quite on terms with the duel ahead but nearly ten seconds clear of Dovizioso in fourth, who found race day tougher going in 2019. Second in the Championship, however, seems ever more likely.

Alex Rins (Team Suzuki Ecstar) recovered from a tougher qualifying and tougher start to the race to complete the top five, just two tenths off Dovi by the flag. Franco Morbidelli (Petronas Yamaha SRT) took P6 and another solid haul of points despite fading a few positions from the start. 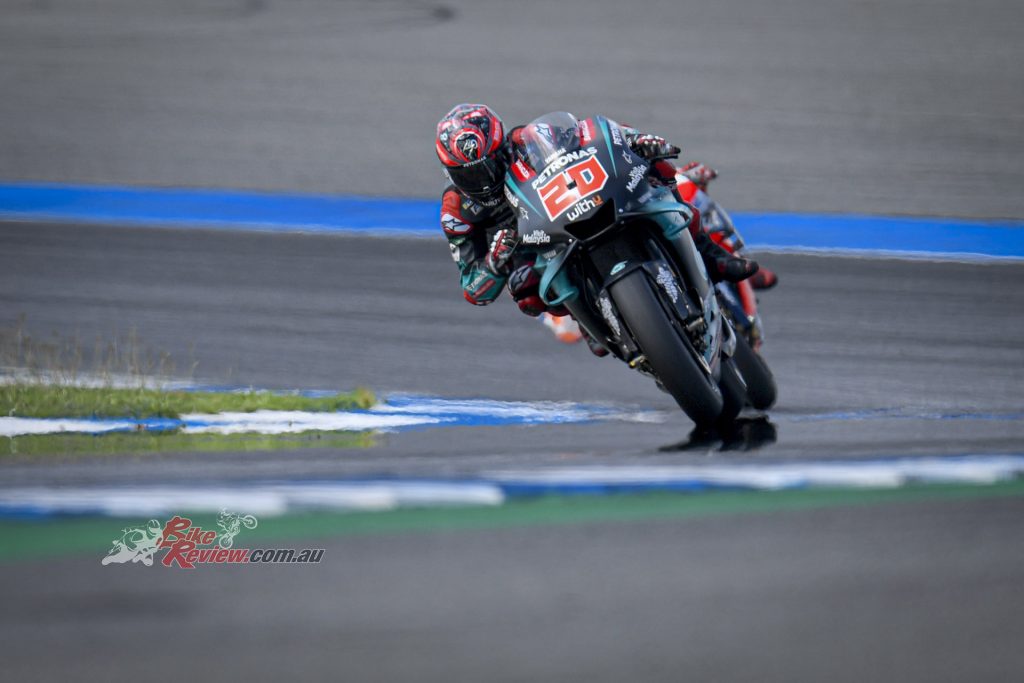 Pol Espargaro (Red Bull KTM Factory Racing) was able to take P13 as he comes back from injury, impressive once again and going the distance, with Jack Miller (Pramac Racing) taking P14. Why? The Australian unfortunately hit the kill switch on the grid and had to start from pitlane. Considering that, it was quite a comeback, just edging ahead of Andrea Iannone (Aprilia Racing Team Gresini), who in turn beat Miguel Oliveira (Red Bull KTM Tech 3).

Marc Marquez: “I am very happy because when you have this big advantage, you need to realise the Championship is very close. But then you need to find extra motivation; an extra motivation was to try to close the Championship in this way. In a nice race with a nice victory. That’s what I did. I mean, Fabio was incredibly fast during the race. I never gave up in the middle of the race, it looked like he was going away but I tried to push. Until the last lap I was pushing, and I never think about the championship – just I was thinking about the race. When I crossed the line, you know, when I arrived…especially with the Repsol Honda Team that they did an amazing job this year. I was very happy dreams come true with all fan club nice celebration. 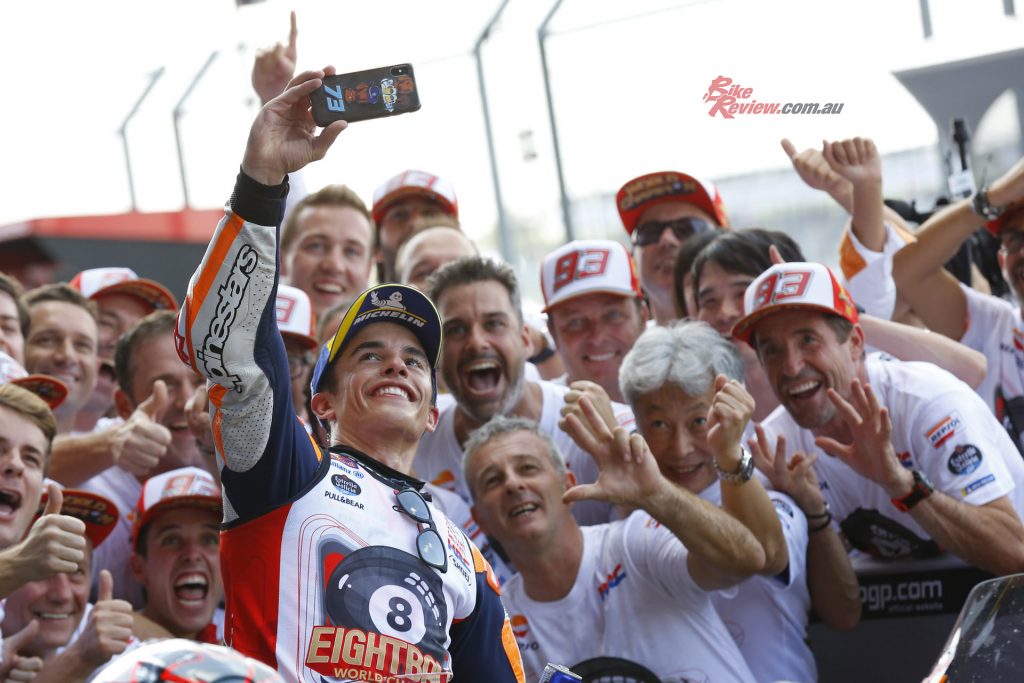 “Every year is special. First of all because it is not easy to keep the same ambition, same mentality and especially the team always understand the situation and when we had some problems…you never give up, keep calm and this is so important. This is the most difficult thing. For this reason the pressure is there, and you feel it. You are human and you feel it. Of course, the winter was hard, with a big injury on my shoulder. We didn’t start the season in a hundred percent physical condition. But we’ve managed it in a good way and now it’s time to celebrate all this.

“Now it’s time to celebrate, time to enjoy. Of course, these last races our intention, our ambition, our mentality is the same. It’s true that when you win the Championship your body switches off one light. We have five lights, switch off one. But we will try to push, one of the targets is to win the triple crown. Constructors we are there, team championship will be difficult. But we never give up. Now it’s time to celebrate… but start 2020 in Motegi!” 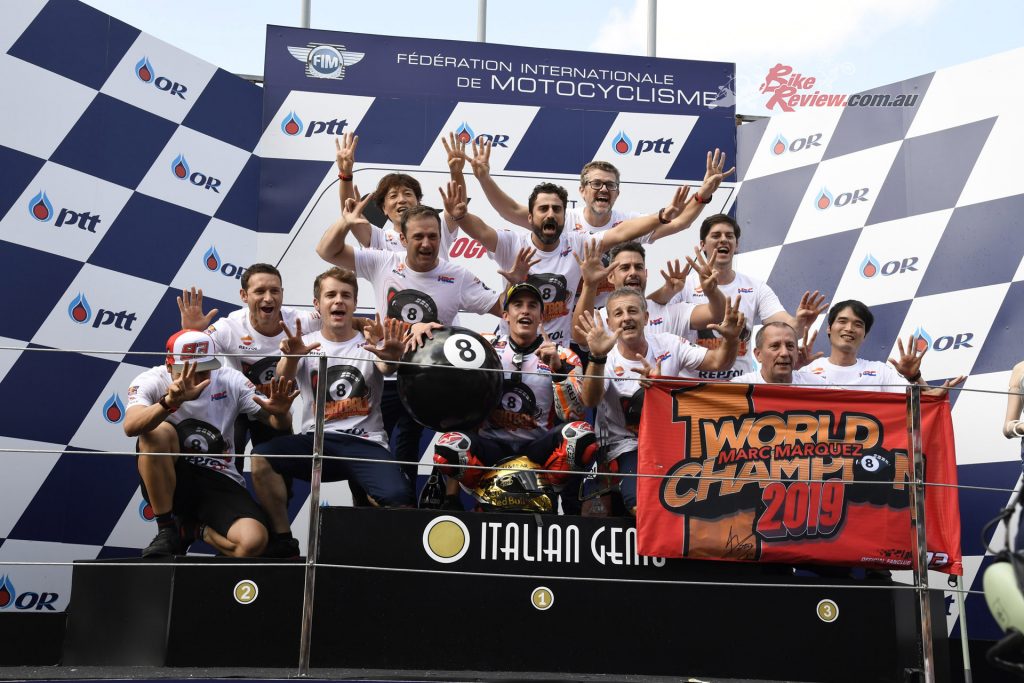