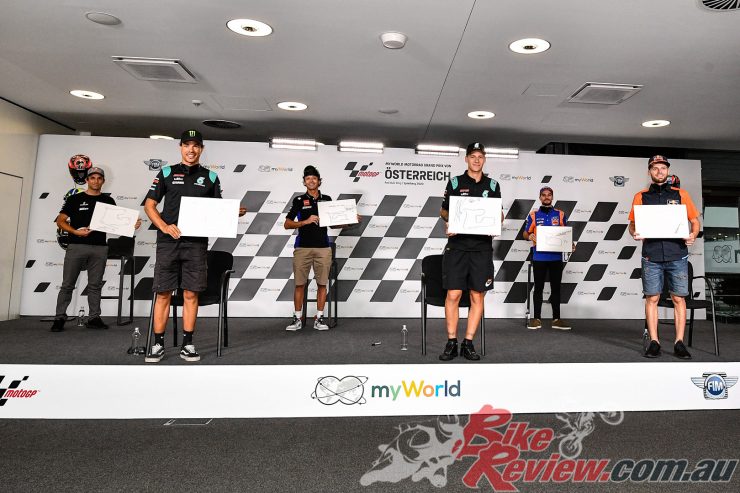 MotoGP riders get ready to race at the Red Bull Ring

It’s that time of week again: Press Conference time. As the paddock sets up in Styria for the myWorld Motorrad Grand Prix von Österreich at the Red Bull Ring, a few familiar faces gathered to debrief recent track action and look ahead to the weekend. 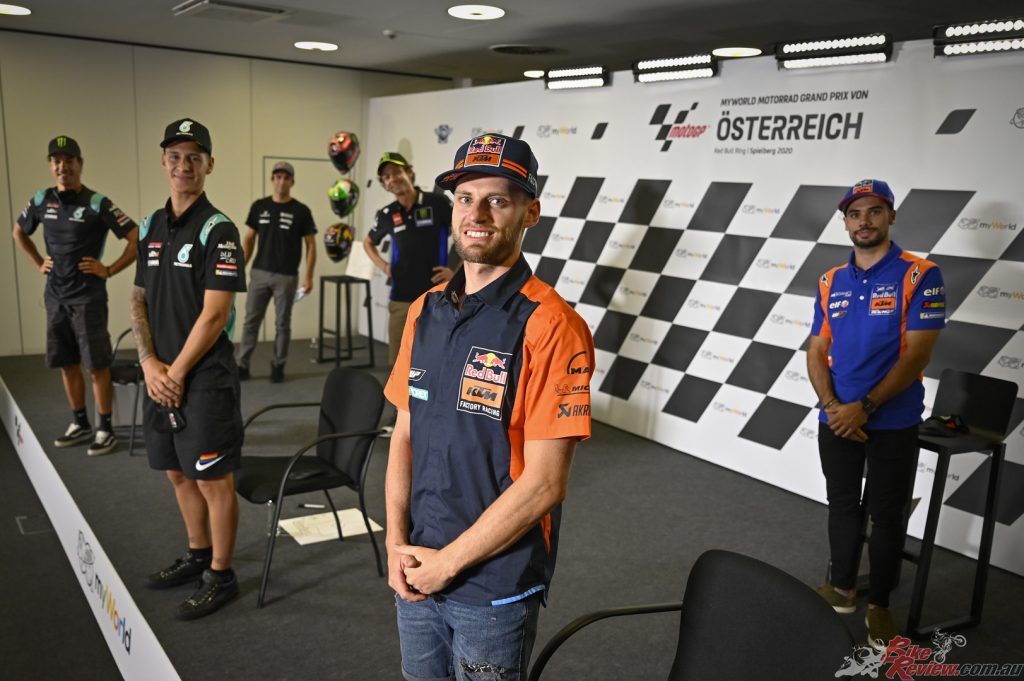 Some of the key players in the 2020 season come together for a press conference ahead of racing his weekend.

FABIO QUARTARARO: “(In Brno) I was surprised because on Friday we had a difficult moment with the bike but in FP4 I had a really great feeling with the medium tyre. With 10 laps, I had a great feeling even more. As soon as we started the race, I had a small moment at Turn 3 and then I was pushing in a different way to make a lap time. At the end everything was so difficult to manage. I forced everything on the front and the rear tyre was destroyed from the start; I couldn’t do anything. The most important thing was to finish the race, because it was already difficult to ride in these conditions. We can say that P7 in this kind of race, one of the toughest I’ve ever had, was a great result. 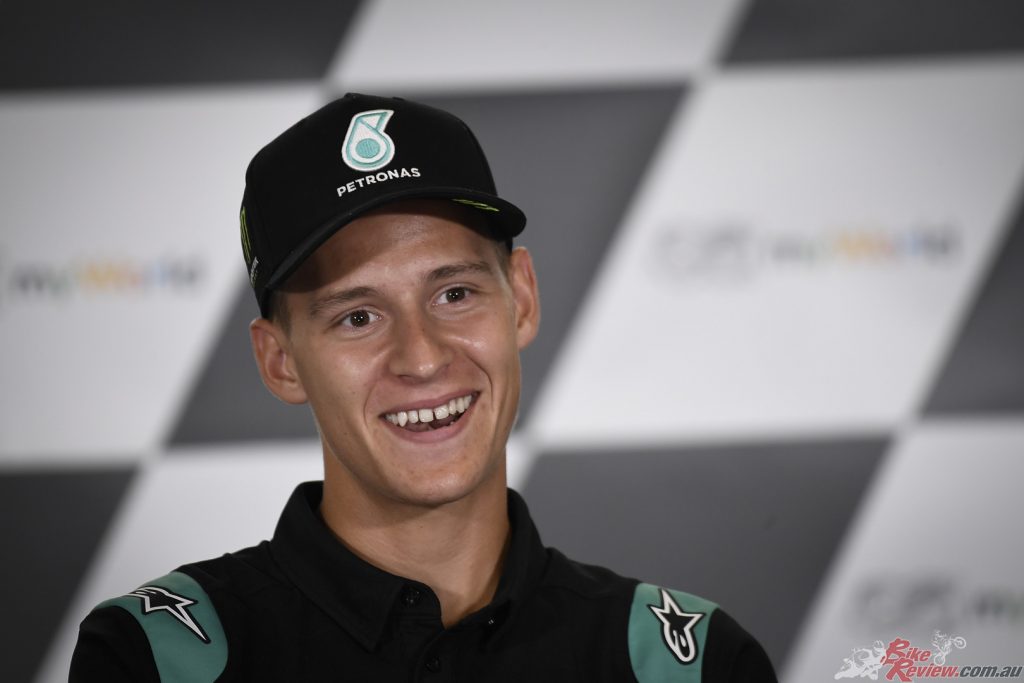 Quartararo increased his points lead in Brno despite a tougher Sunday.

“I arrived here on Monday and when we looked at the forecast, it says it’s raining everyday. But really it’s for about an hour, today it was predicted much earlier. Looks like it’ll rain on Friday and Saturday, sun on Sunday, we will do our best in every condition. But it’s true that it’s not easy to have a GP in these conditions.

FRANCO MORBIDELLI: “I enjoyed it a lot in Brno. I enjoyed it a lot all weekend. I was able to be as fast as I’d always like to be. And I was able to get my first podium. It’s a nice feeling – a good injection – to jump into this weekend, which on paper looks more difficult because historically this track isn’t Yamaha’s best one. But, looking at Yamaha’s pace right now they are fast in every condition and every situation so far, so why not keep believing in achieving top results, including at this track. 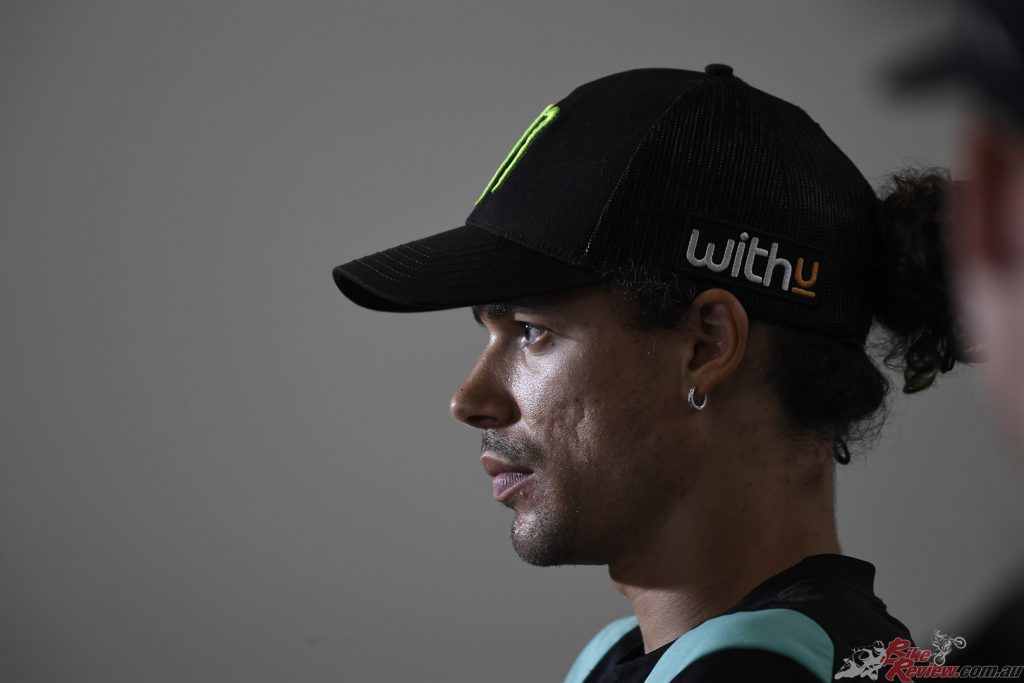 Morbidelli arrives into the weekend as a premier class podium finisher.

“I like this track. I finished 2nd in 2016 and 1st in 2017 and it’s a track that is a little bit special, so finally I like it. This is positive, and as I said, I have a great injection of self-trust and I’m really looking forward to jumping into this weekend.”

BRAD BINDER: “When I last spoke to you I think it was safe to say I was in shock like everyone else. Its been a super cool week, I got to do things I’ve never done before. It’s a day I’ve always dreamt about and to finally get a victory was fantastic. It was really amazing for my whole team, Red Bull KTM and everyone that supports me. All in all it was a great weekend and a day I’ll never be forgetting. 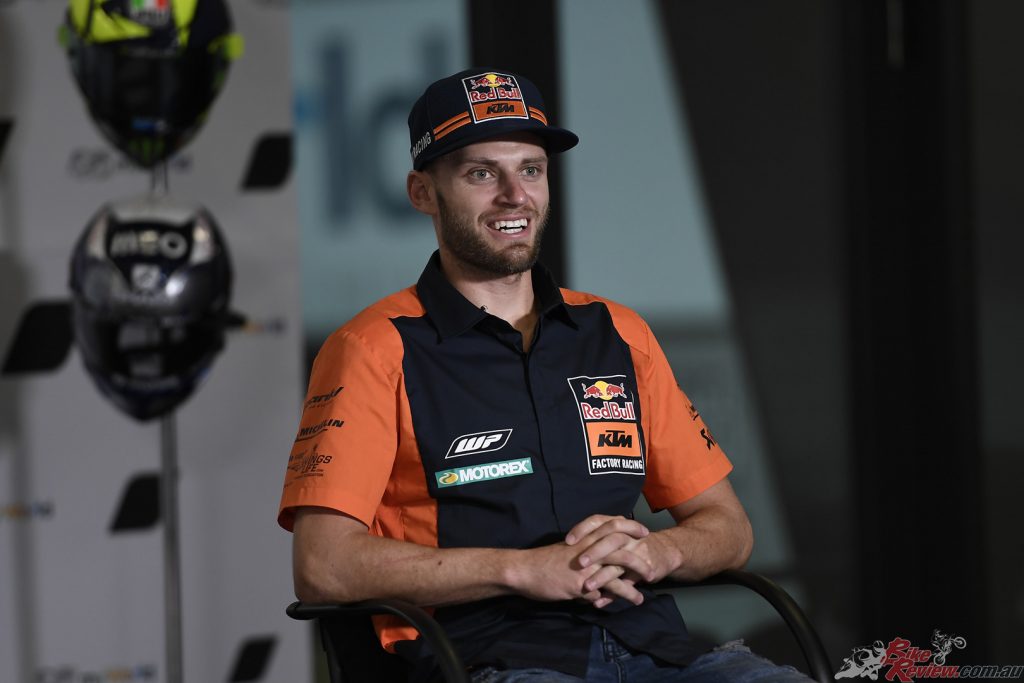 The man of the moment: Binder gets ready to race Red Bull KTM’s home track.

“I did a couple of laps around Jerez at the end of last year but at that stage I was still not sure how things go on a MotoGP bike. It will be super cool to try out the rain conditions again, I’m looking forward to it strangely enough. It’s a really important weekend for Red Bull and KTM, their home Grand Prix, it’ll be fantastic to have a good weekend for them but it’s important to keep my feet on the ground, reset, I want to carry on exactly how I’ve done in the previous weekends and just try and have a clean weekend overall.

“After my first season in 2012 I was at the Valencia GP and I thought I was on my way home. I never had a contract for next year and I was really fortunate that Ambrogio Racing picked me up and gave me a ride for the following season. If it wasn’t for that I’d probably be at home sitting behind a desk, so hats off to them, thank you so much and I look forward to this weekend to see how we get on.”

JOHANN ZARCO: “It’s given me a lot of motivation after the podium in Czech Republic. This podium gives me confidence, plus I know the Ducati is strong on this track which gives me some hope, high hopes, but as Brad says, keep your feet on the ground, because I’m still learning the bike and trying to control it so I can be faster, focusing on doing the right things step by step, because it seems here on the Ducati that if you ride it correctly the bike goes fast! Let’s see what is possible.

“I’ve got no idea why the other (Ducatis) have been struggling over the weekend. I don’t want to know too much. Things are working for me, even the pole position, the way I did the lap, everything went well and then I got the surprise of the lap time and pole position. So, from the Saturday afternoon then all went well and also the race was good for me because I started at the front and when you do the first 10 laps with the top group the second half gets better, not easier, but with the used tyre you can control it better and I think all of this from Saturday afternoon went well and this made the difference in comparison with the others.” 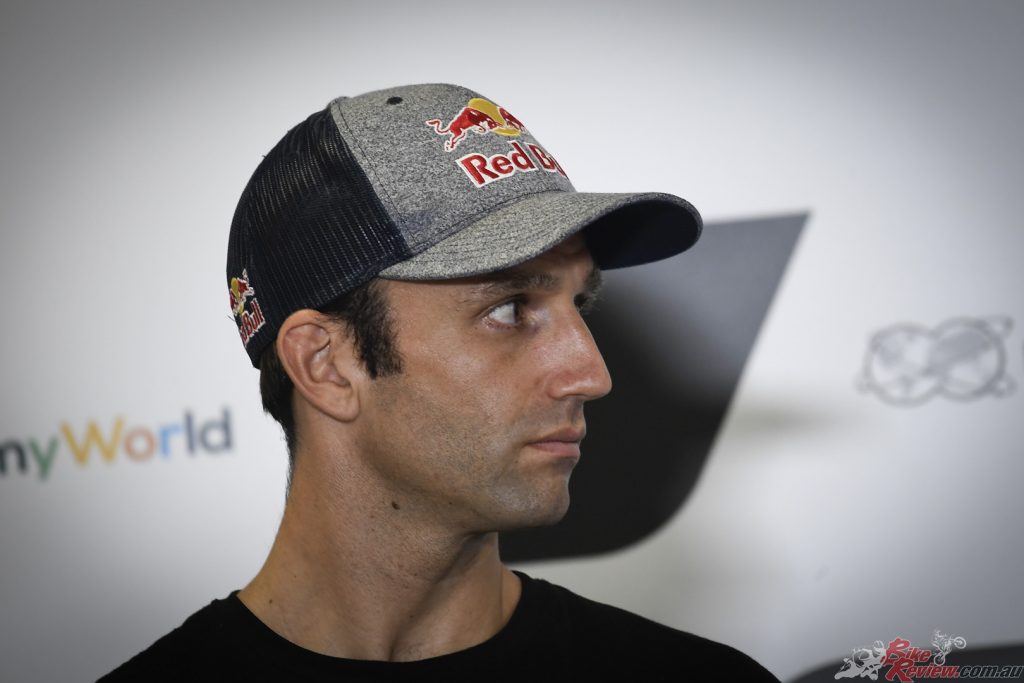 Could Zarco be a dark horse to continue the Ducati record at the Red Bull Ring?

VALENTINO ROSSI: “In the end the race (in Brno) was positive for me. Unfortunately I did some mistakes in qualifying and I had to start from the fourth row, and then it’s difficult to recover. I had good pace and I felt good with the bike, also in the second half of the race I could push. We recovered position by position, tried to ride clever and make clear overtakes. We stayed a lot with Rins, we did the race together from the bottom to arrive to Johann in the last laps but it wasn’t enough for the podium. On one side it’s a positive feeling because I enjoyed the race, I can ride in a good way and also in difficult conditions, and it was not so bad. From the other side we need to improve something, especially on Saturday, to try and start in a better position.

“On paper this race is not good for the M1 because the top speed is not very strong for us, but like in 2019, the bike was good to ride and we did a good race with the M1. We were a bit too far from Ducati and Honda but we fought for the podium. We have to try to be strong and try to fight for the podium and after, the forecast will be very important. It looks like it can change from the morning to the afternoon, it’s not clear what’s going to happen. So we need to be strong and ready in all conditions.” 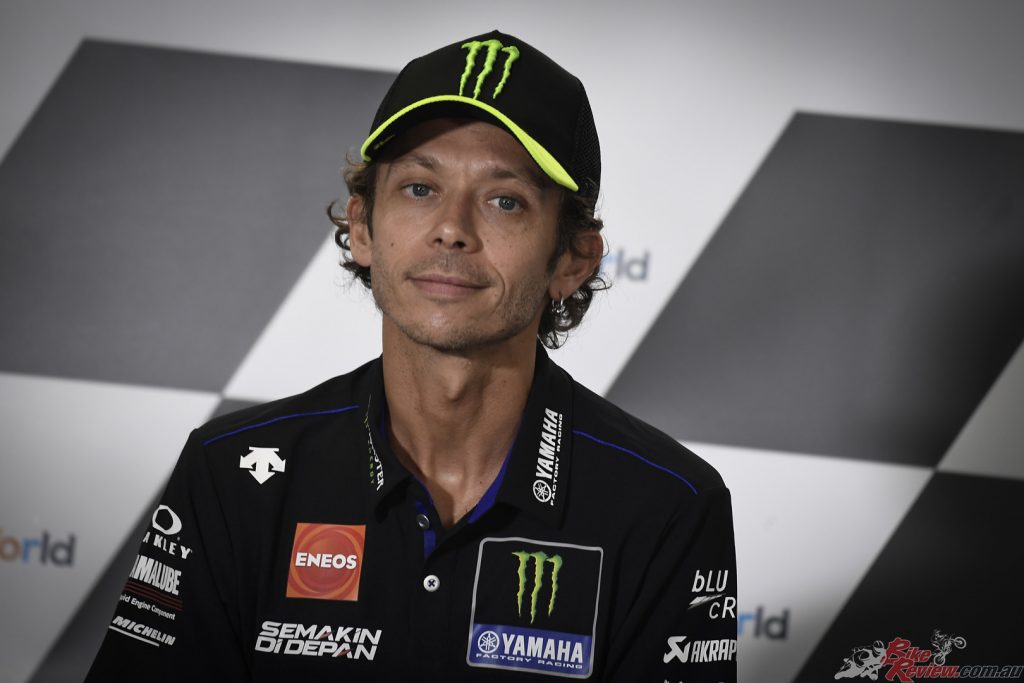 Rossi arrives with some solid momentum, could he take premier class podium?

MIGUEL OLIVEIRA: “The weekend in Brno was going quite well on Friday. It was already a positive day for us being inside the top 3 but then I made a mistake in FP3 and crashed on my fast lap and that lap could have been very good, maybe 7th or 8th. Going through Q1 I almost got it by a little bit, but then I had to start on the fifth row. It’s already quite tricky when you have to overtake some riders, to make clever overtakes and not go backwards. It’s not easy. Looking at the race on paper we had the pace to challenge for the podium which is positive so at the end of the day, I don’t need to take it as a frustrating point, I can be happy about the position and my riding.

“You know every rider wants to give the factory a win, especially the first win. I don’t compare myself with Brad or Pol because I think Pol in this case would have been the rider that would have loved to give KTM their first race win because he’s been there since day one. So, for me, I don’t need to take it as a frustrating point. I’m happy for Brad that he won because he rode well. I don’t feel less of a rider for not having won the first race to be honest, we need to focus on the next opportunities.” 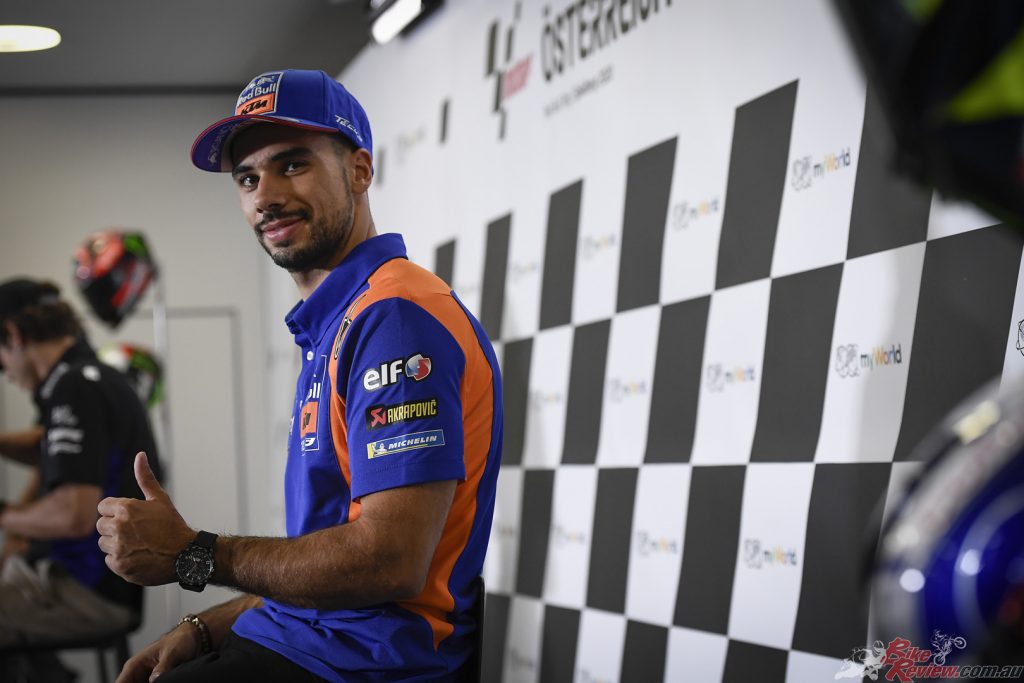 Reason to smile: Oliveira was top KTM at the track in 2019, and Portugal just joined the 2020 calendar.

It was also important, of course, to get a reaction to the news that MotoGP will race at the Autodromo Internacional do Algarve for the season finale…

“It’s exciting news, of course! For me, as a Portuguese rider I would like to have a home race and it’s happening at the end of the season. I couldn’t be happier that we’re going to race at Portimao. It’s a super technical track, very demanding, so I think it will be fun to race in MotoGP there.”