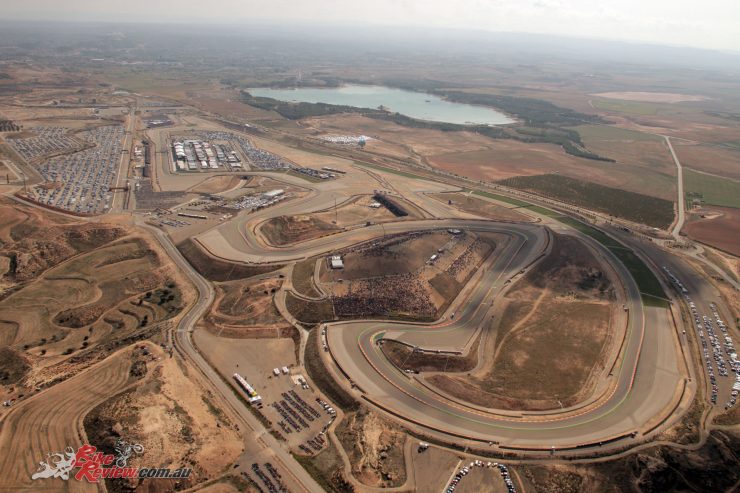 From a Misano painted red by Jorge Lorenzo’s (Ducati Team) pole and teammate Andrea Dovizioso’s victory, it’s time to pack up and head for MotorLand Aragon – where the red may well remain.

The track is a venue much loved by Championship leader Marc Marquez (Repsol Honda Team), and the stands will likely be filled with the red flag of the 93. Marquez has such an advantage in the title fight that it could be the faithful’s last chance to see him race on home turf before becoming a seven-time World Champion, too – and his speed at the venue has been unrivaled. 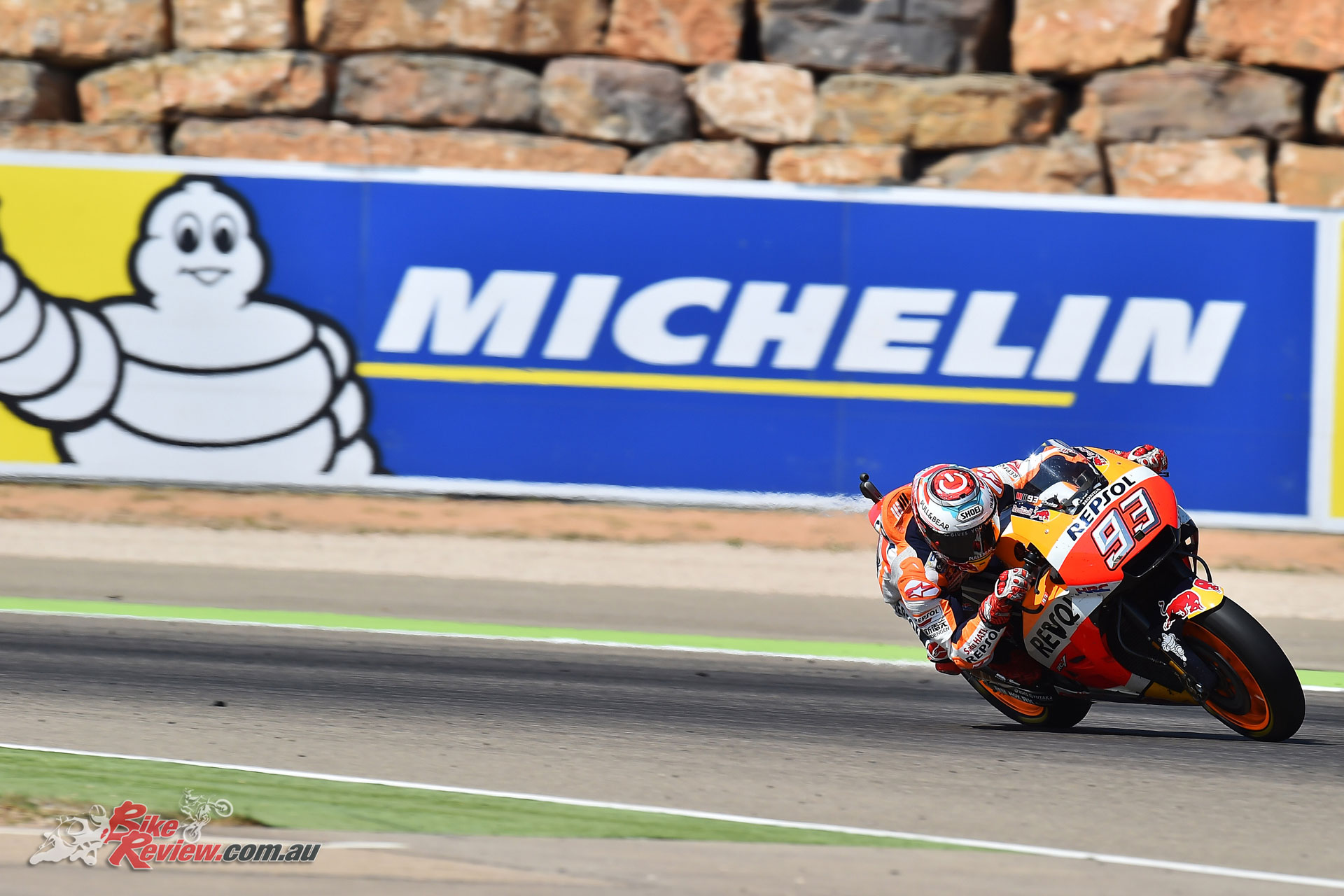 On pole in four of the five MotoGP races he’s competed in at MotorLand, Marquez has three wins there and two DNFs. A big ask for those on the chase to overhaul, but failure is no longer an option if they hope to reel in the reigning Champion.

As with many venues fairly new to the calendar, a close rival to Marquez’ record is Lorenzo. The number 99 won in 2014 and again in 2015, took a podium in his first season on a Ducati and had incredible speed at a recent test there. Will he be a key presence at the top once again? 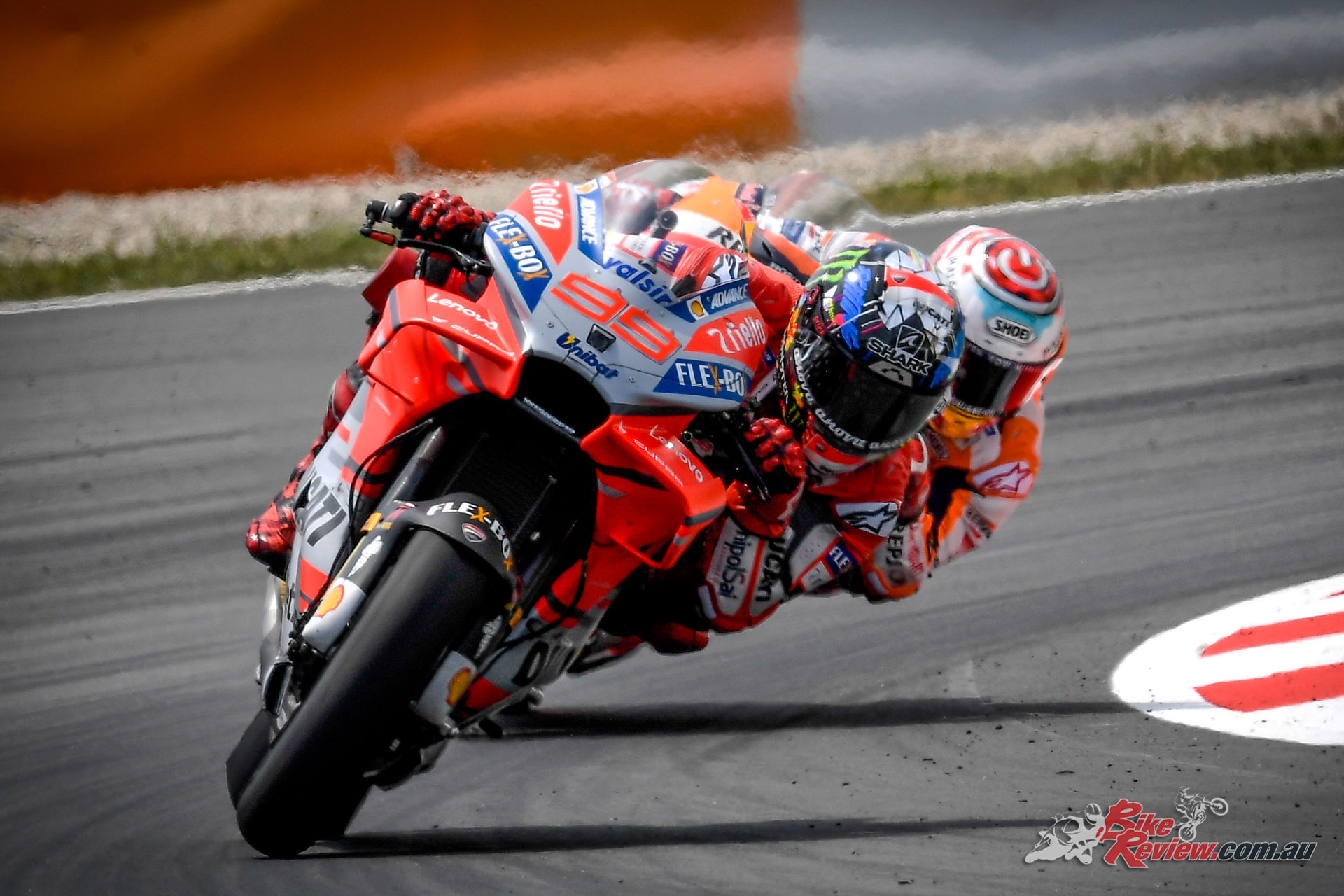 Jorge Lorenzo saying, “After the Misano race I managed to turn the page relatively easily: I realized where we went wrong and drew some interesting conclusions. Now we’re off to MotorLand, a circuit where I think we can capitalize on the strong points of our bike and where last year I was able to get onto the podium. The test we did three weeks ago was very positive and now we are back here well-prepared and with very clear ideas. After a crash you go back onto the track in the next race even more determined to do well and we will demonstrate that we can continue to fight until the end.”

After crashing out so close to the end of the race at Misano, the stakes are a little higher to get a result but there’s little Championship pressure per se. Lorenzo will also get a lot of support racing at home – and so too will Dani Pedrosa (Repsol Honda Team), another former winner at the venue and one who was much closer to the fight at the front again last time out. 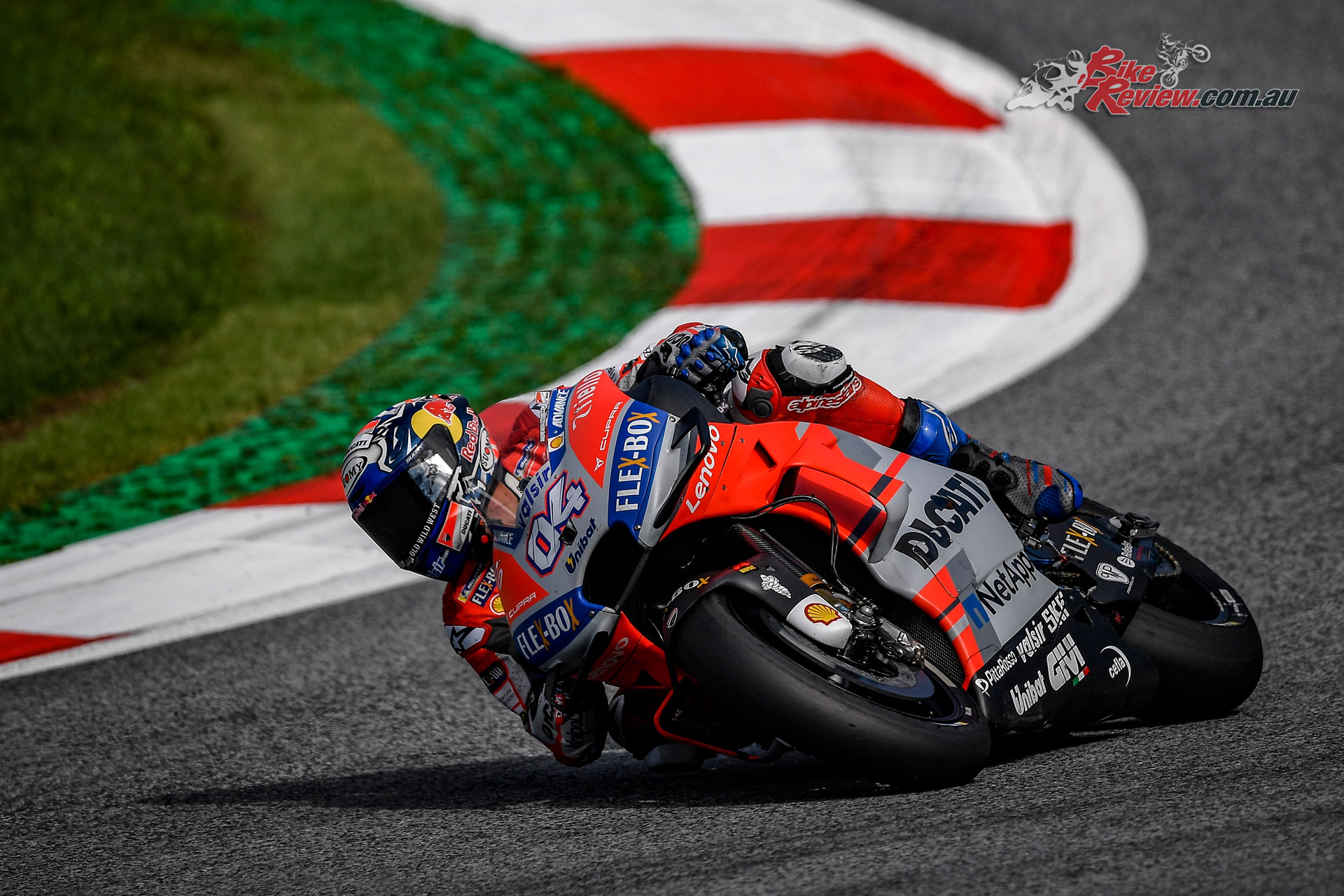 Last time out though, the spoils belonged to Andrea Dovizioso. Making his way to the front and then managing the gap to perfection, the Italian’s win was a statement and further showed how competitive the Ducati now is at any track – not just those where success has come before. But can that translate at MotorLand? It was a tougher weekend for ‘DesmoDovi’ last year at the venue, and it will be key to see if that will still be true in 2018 – he’s now second in the Championship and it has to start now.

Andrea Dovizioso saying, “MotorLand Aragón is a really nice track, rather unusual and totally different from Misano where I won for the first time in MotoGP two weeks ago, but it’s also a track where we have traditionally always struggled a bit. In the test at the end of August however we lapped really well and I think that this time we can fight for the win. I expect to be quick, but Jorge and Marc also go particularly well on this track so it’s not going to be easy.” 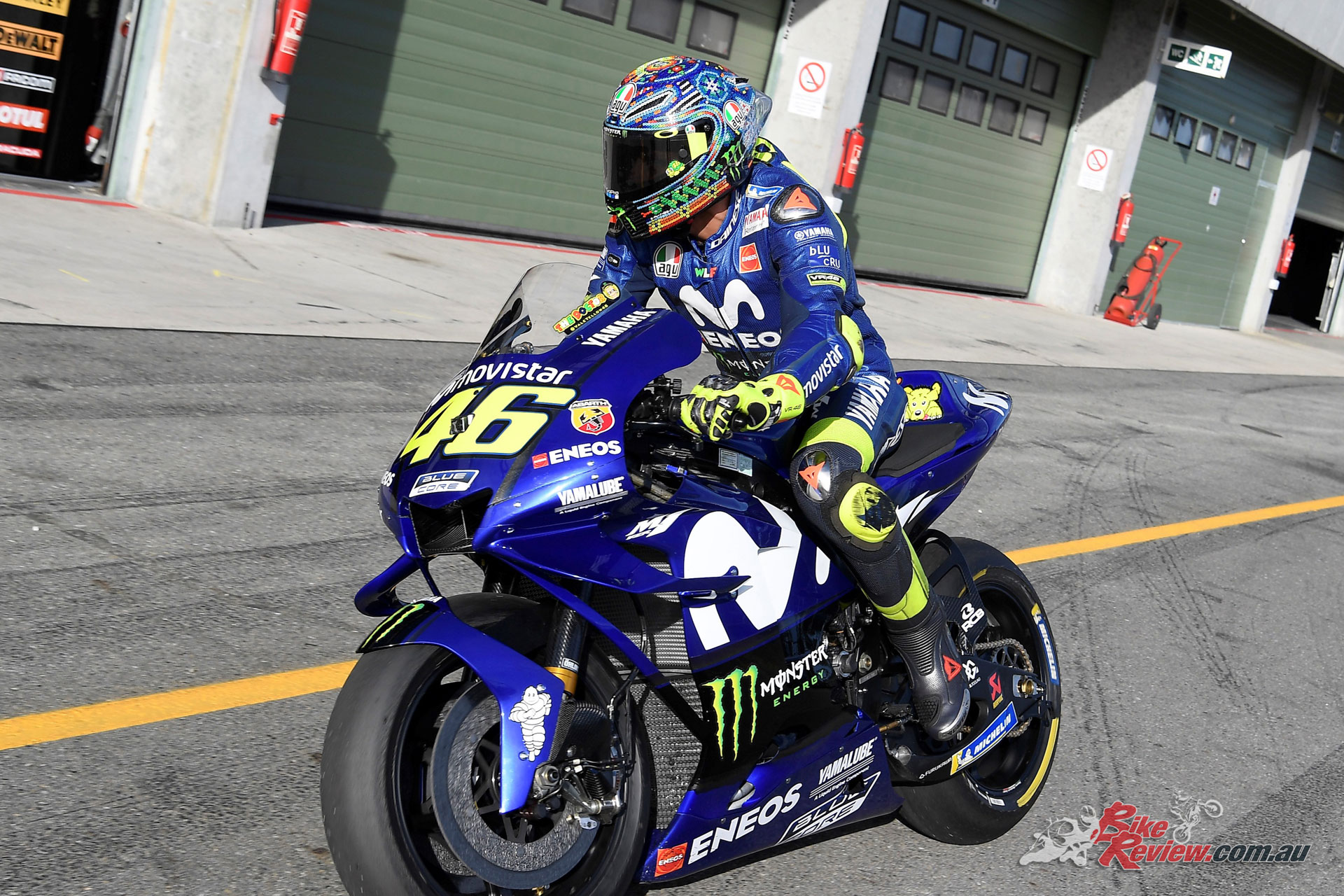 A tougher weekend was the name of the game for Movistar Yamaha MotoGP come Sunday at Misano, too – with higher temperatures hitting both Maverick Viñales and Valentino Rossi. Rossi was the home hero last time out, and now that switches to Viñales’ honour – something he’ll be hoping will bring a little more form.

In 2017 at Aragon, the two men battled it out to the line despite Rossi coming back just weeks after breaking his leg, and Viñales ultimately took the upper hand – but only just. Finishing the race fourth and fifth, it was a better weekend for the team in the latter part of the season and they’ll want that to remain true this time around. 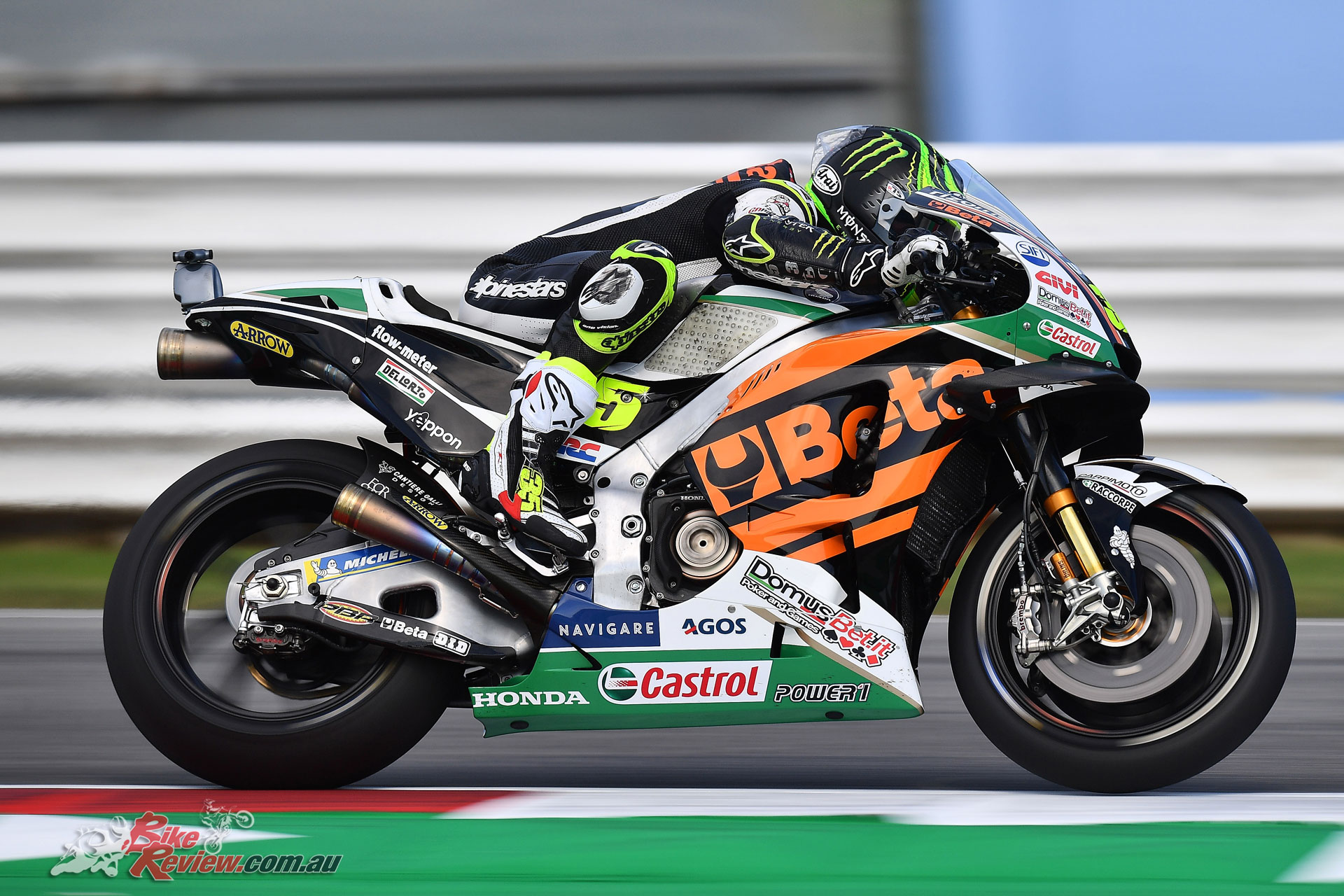 The fight for top Independent Team rider, meanwhile, remains close. Cal Crutchlow (LCR Honda Castrol) leads the way by a margin after his impressive pace and podium at Misano, but Johann Zarco (Monster Yamaha Tech 3) and Danilo Petrucci (Alma Pramac Racing) remain close enough if the cards fall their way: Crutchlow has 119 points and the two on his tail 110. None had a big race to remember last season, so it’s tough to predict, as ever.

Rookie of the Year is another close battle – with Franco Morbidelli (EG 0,0 Marc VDS) now back ahead of Hafizh Syahrin (Monster Yamaha Tech 3) by two points. The Italian had some good pace at Misano, can he keep this momentum rolling? Or will Syahrin get back on form and rebuild some earlier confidence? 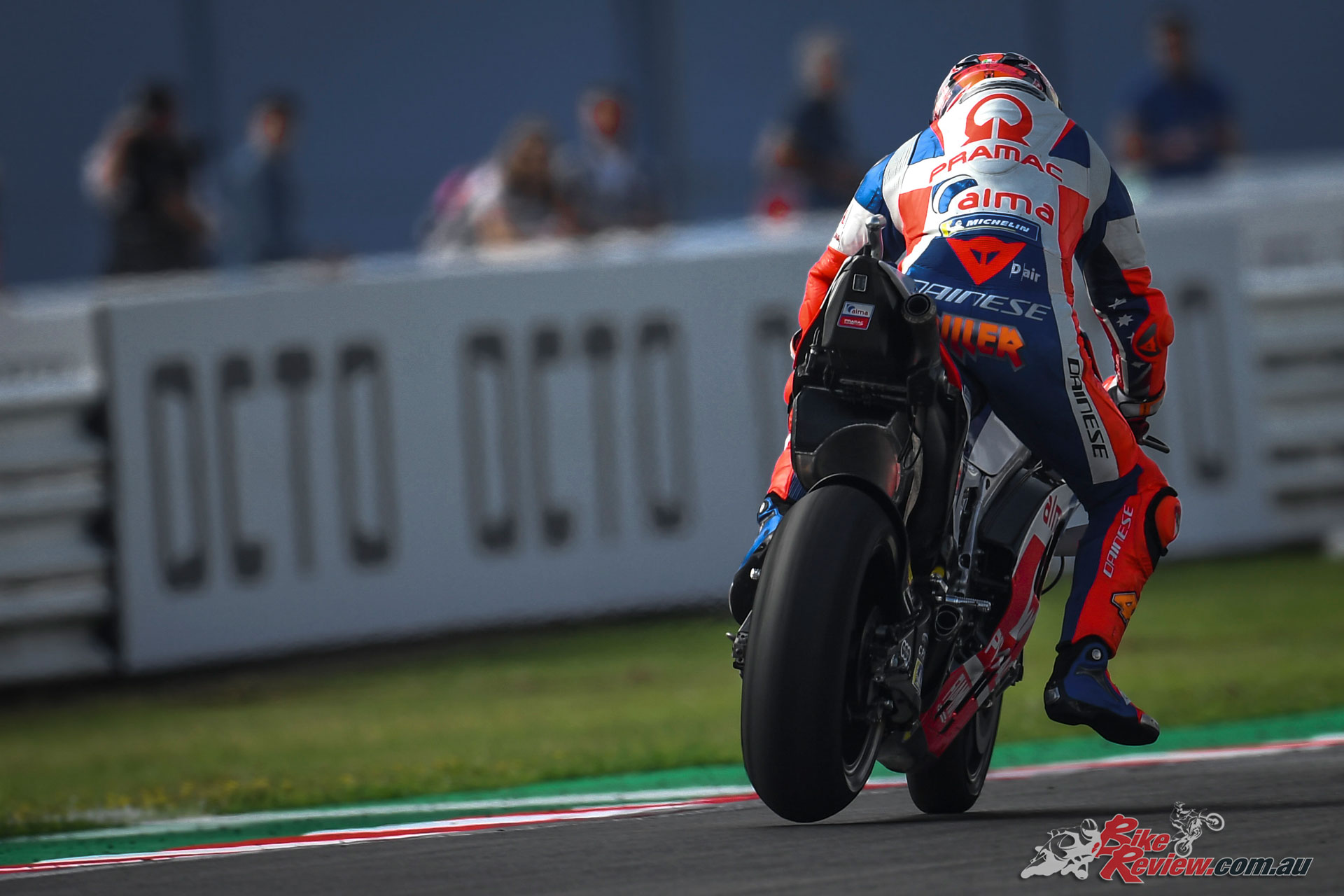 Moto2: Bagnaia back in control before Aragon?

It’s becoming a tradition of sorts for Francesco Bagnaia (Sky Racing Team VR46) to win the race when he’s qualified on pole, and that was no different on his home turf at Misano World Circuit Marco Simoncelli. Sublime from lights out to take another victory and extend his lead to eight points, he was very much back in the driving seat – but it’s far from as easy as it looks. 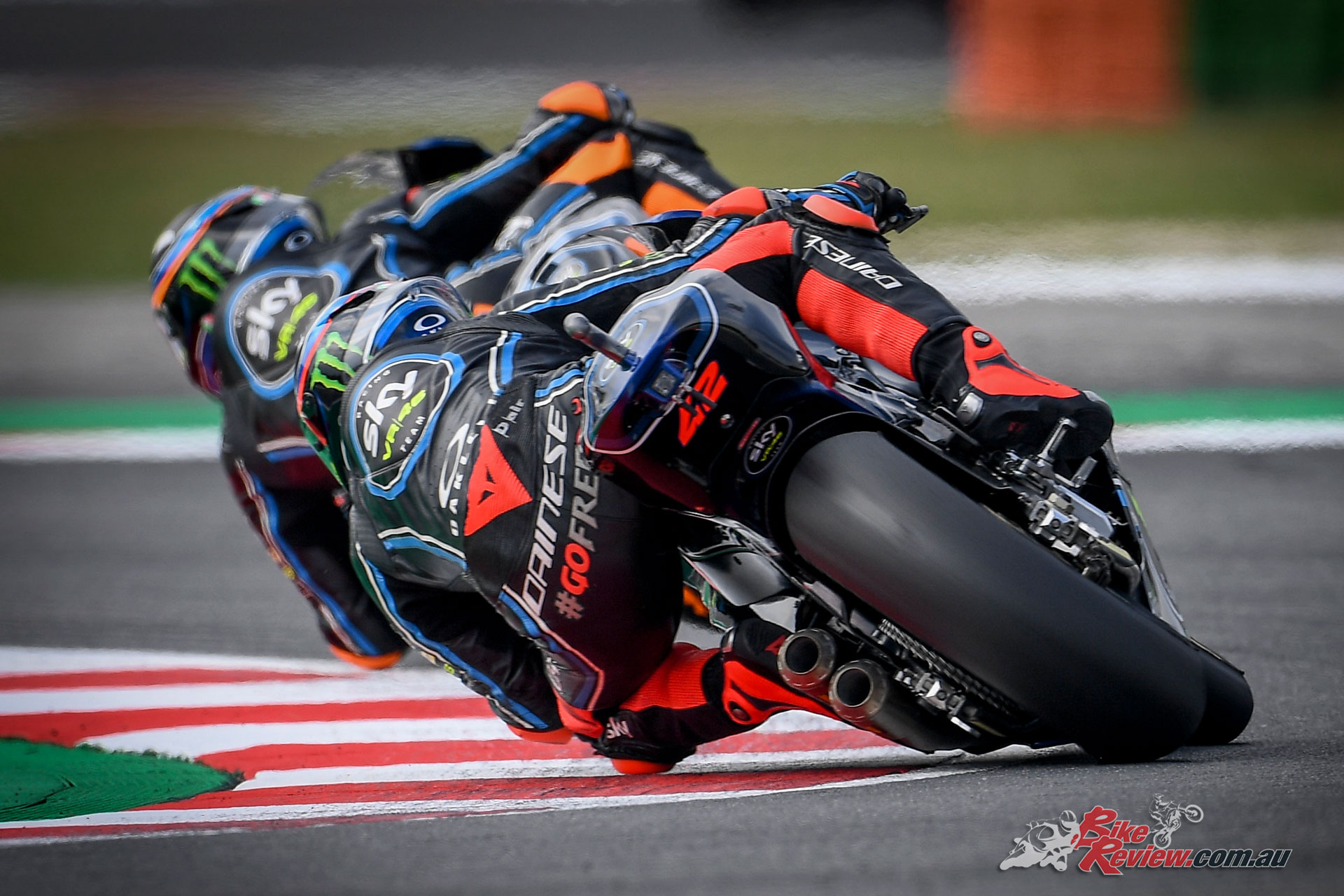 Pressure came from the home crowd as well as Miguel Oliveira (Red Bull KTM Ajo) at Misano. It wasn’t a bad Sunday for the Portuguese rider, who qualified in the top ten and then came home second after a stunning start, and that made for some impressive damage limitation.

He’s also got some real form venues coming towards the end of the season – he won the final three rounds in a row last year – and choosing when to attack and when to defend can be important. But can that gap be allowed to grow much more? MotorLand could be decisive, and he took a podium there last year.

There’s more to Moto2 than those two, however. Two big names riding on home turf at Aragon are Alex Marquez (EG 0,0 Marc VDS) and rookie teammate Joan Mir. Marquez’ record at MotorLand is mighty and he needs some points – crashing out at Misano through no fault of his own – and Mir won the Moto3 race at the venue last season. 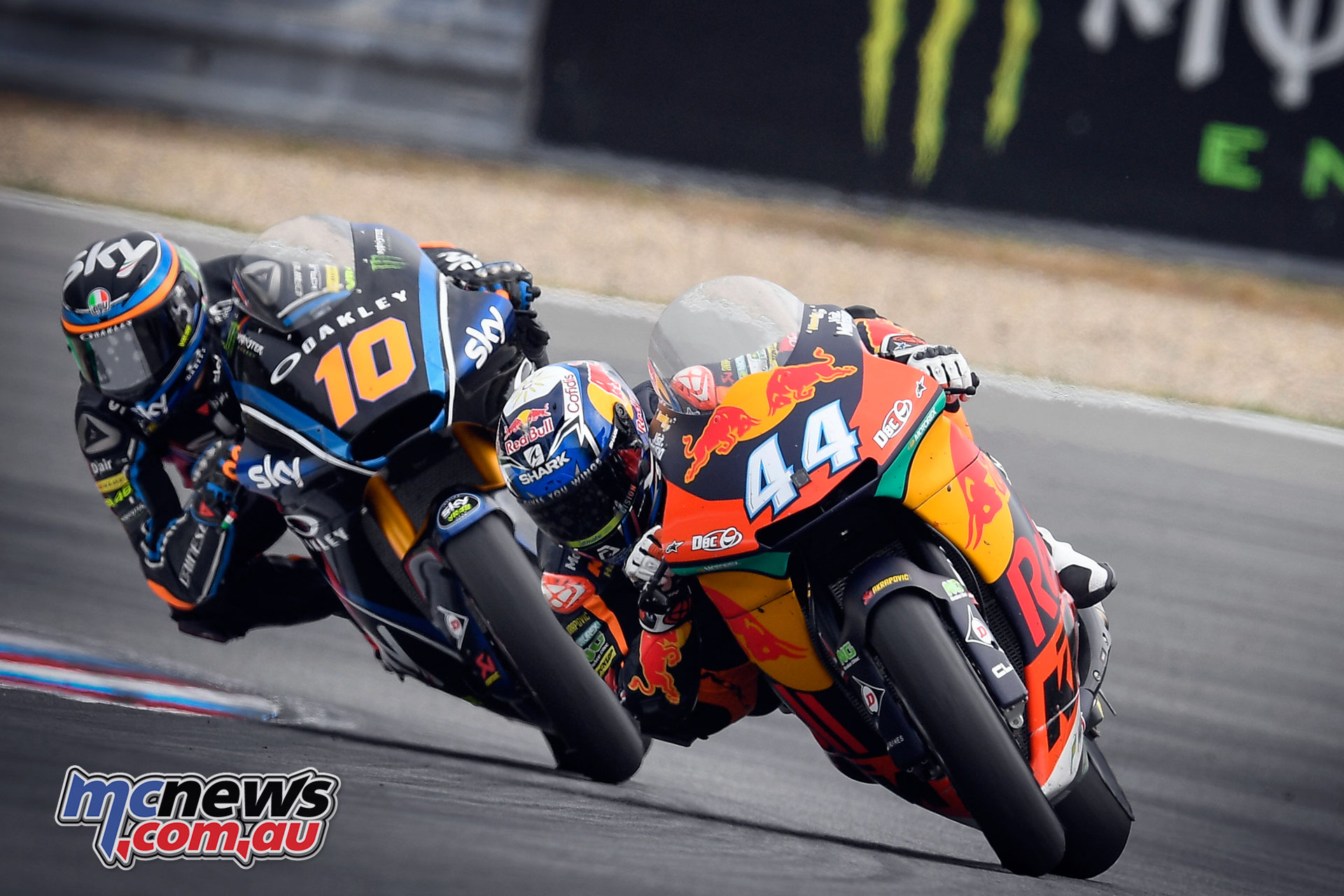 They could prove a serious force to be reckoned with – as could Brad Binder (Red Bull KTM Ajo), now third in the Championship, Lorenzo Baldassarri (Pons HP 40), home hero Xavi Vierge (Dynavolt Intact GP) and veteran Mattia Pasini (Italtrans Racing Team), who had a stunner there in 2017.

In addition, how will Marcel Schrötter’s (Dynavolt Intact GP) form change now he’s taken his first podium? Will he now be another fast complication for those fighting for the crown? The German has been consistently quick but he now has a rostrum to build from. Sam Lowes (Swiss Innovative Investors) also has great form at MotorLand and could be one to watch.

Finally, the Marinelli Snipers team have announced Xavier Cardelus as their replacement for Romano Fenati following the incident at Misano – and Cardelus knows the track well.

Moto3: Advantage Martin on the road to MotorLand

Jorge Martin (Del Conca Gresini Moto3) emerged onto the podium after the scrap for victory at Misano, but the Spaniard took back the lead despite missing out on the win as key title rival Marco Bezzecchi (Redox Prüstel GP) had some home race heartbreak and crashed out. That leaves Martin eight points ahead on the road to his next home race as the pendulum of pressure swings back to the Spaniards. 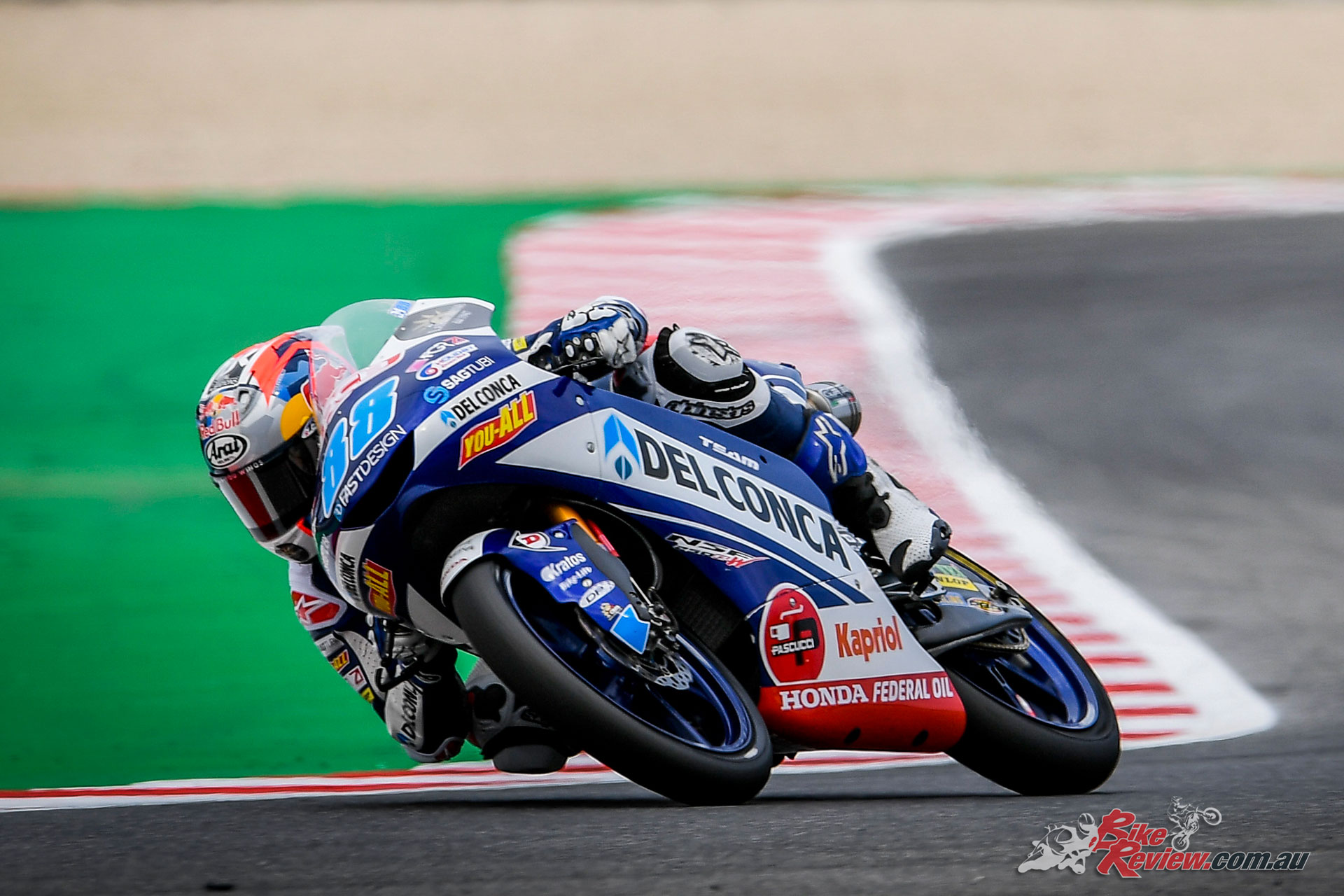 That’s not a big gap for Bezzecchi to try and make up, however, and another Italian will also be looking to gain ground: Fabio Di Giannantonio (Del Conca Gresini Moto3). ‘Diggia’ is 29 points back, and now it’s starting to become crunch time as number of rounds remaining counts us down to Valencia. The Del Conca Gresini Moto3 rider also took second at the venue last season, whereas teammate Martin was just off the podium…

The man completing that podium in 2017 was Enea Bastianini (Leopard Racing), and for the ‘Beast’ it’s more than crunch time; fast becoming a last chance saloon – as it is for fellow contender Aron Canet (Estrella Galicia 0,0). The two both crashed through no fault of their own at Misano, and MotorLand is needs to see fortune favour them if they’re to stay in the fight for the crown.

With an increasing number of names crowding the top of the timesheets – like first time winner at Misano Lorenzo Dalla Porta (Leopard Racing) – that’s an ever-increasing challenge.