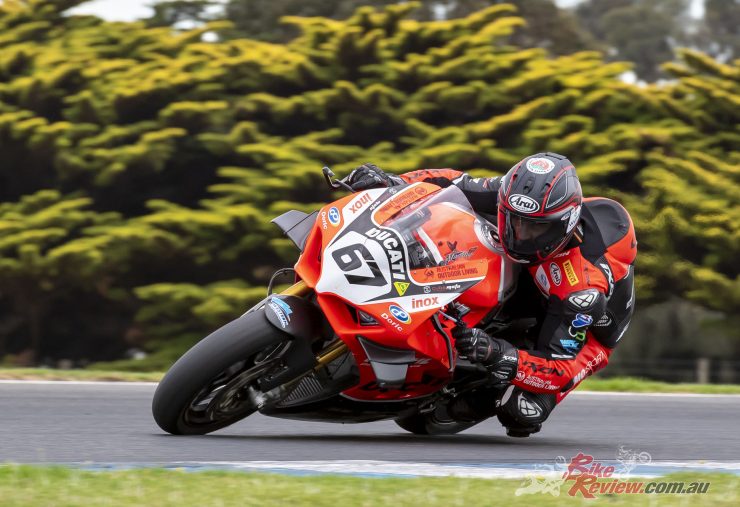 The ASBK riders were recently at Philip Island for the official pre-season test...

The Official mi-bike Motorcycle Insurance Australian Superbike Championship presented by Motul (ASBK) Test kicked off at Phillip Island with torrential rain, no rain, light drizzle and humid morning conditions before the sun finally broke through in the afternoon and enticed the riders to attack the track in anger. 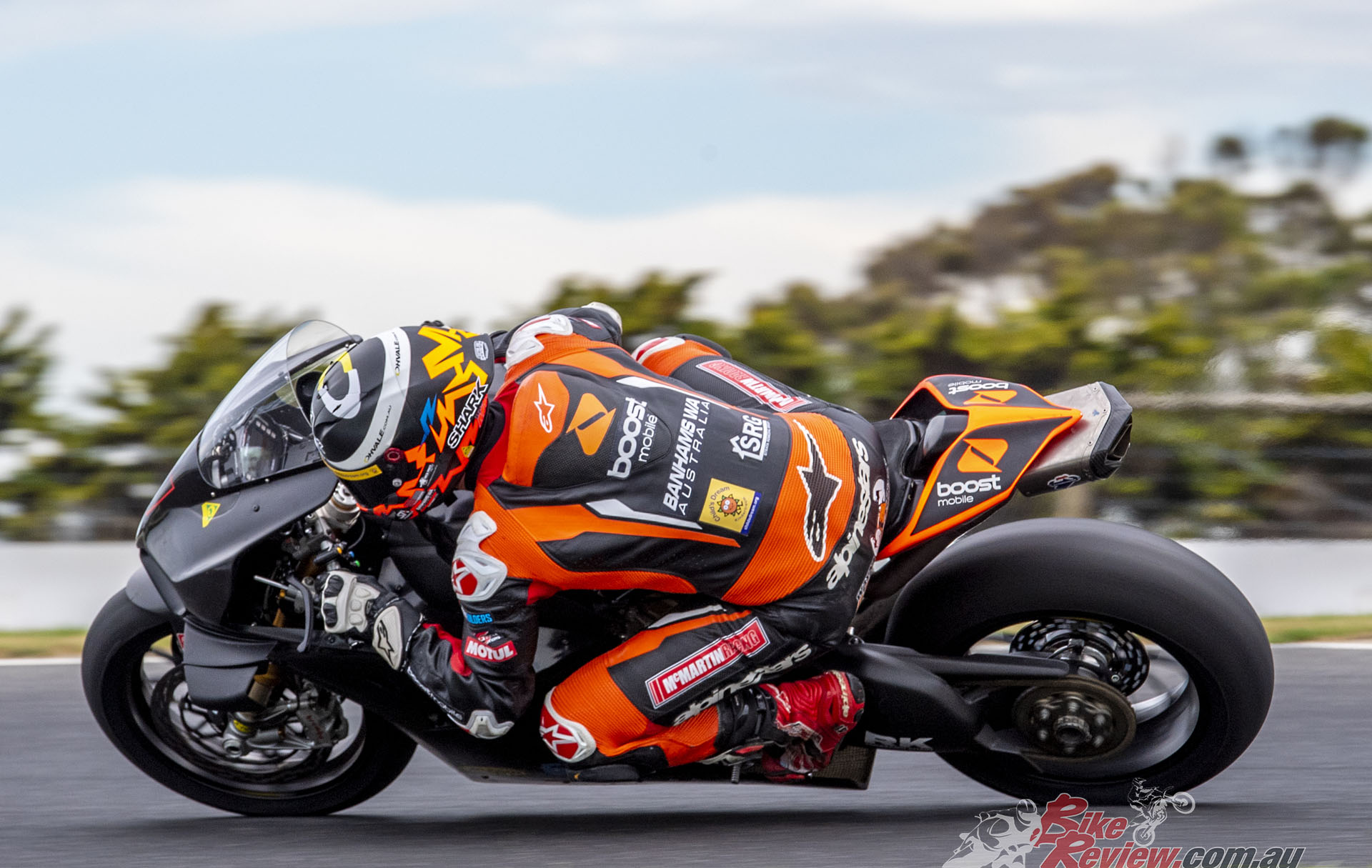 Most of the major players were in attendance, with all eyes were on 2020-21 Superbike Champion, Wayne Maxwell, who came out of attempted retirement to attempt to net another title in 2022.

Maxwell (Ducati V4R) lead the early dry sessions in the premiere Alpinestars Superbike category to the tunes of half a second ahead of Bryan Staring (Ducati V4R), with Aiden Wagner a further three tenths back in the Yamaha YZF-R1. Lachlan Epis (BMW-MRR) would later split Maxwell and Staring in fourth practice despite Maxwell dropping into the 1:31.9’s with a startling one-second advantage over the second place. 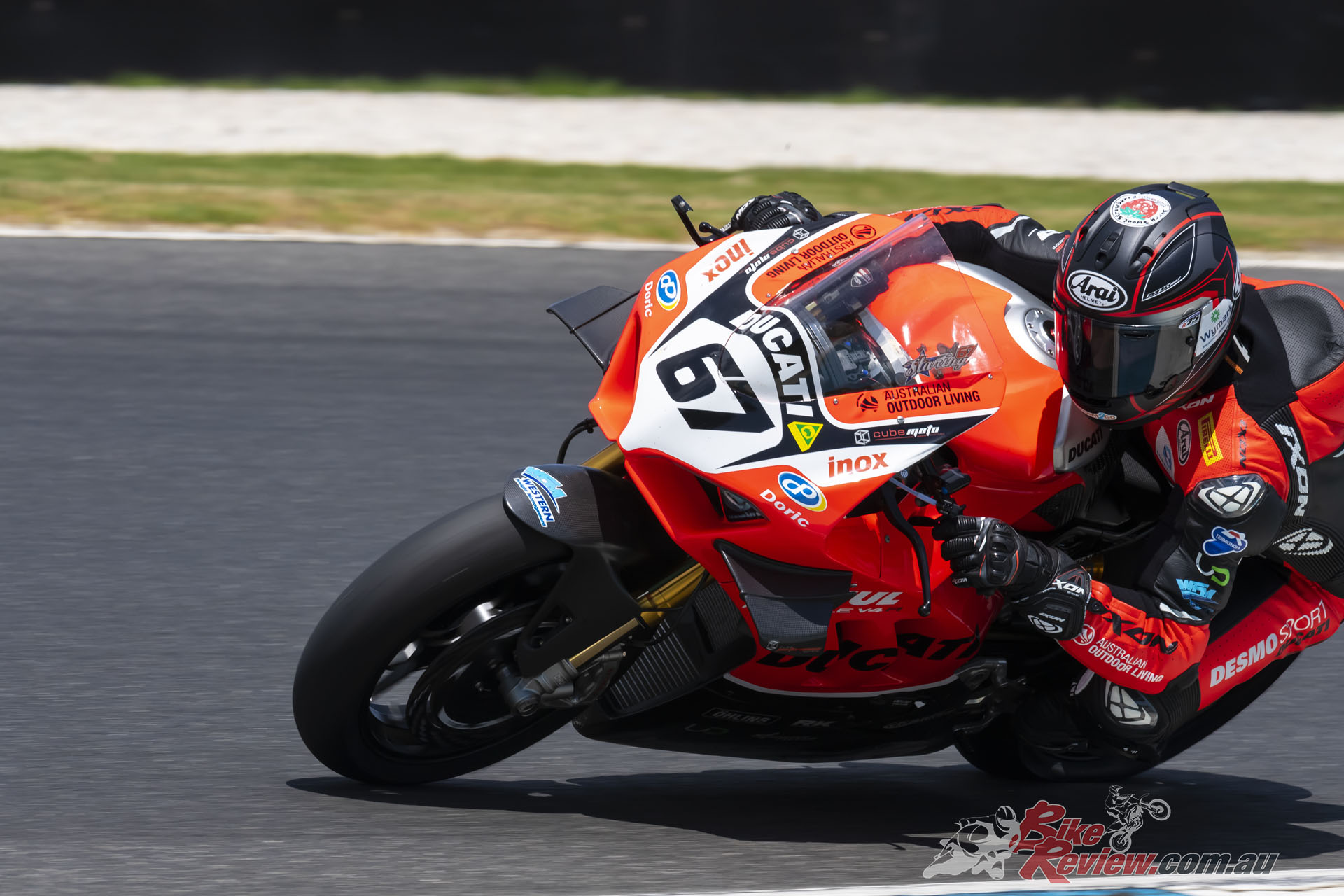 Bryan Staring followed close behind Wayne Maxwell as the pair of Ducatis trumped the timesheets.

Tom Edwards (YZF-R6) lead the way early in the Michelin Supersport class, edging Harrison Voight (YZF-R6) to the tune of one-tenth, with Senna Agius (Honda CRB RR) just three-hundredths of a second in arears. Oli Bayliss however would trump Edwards in Practice Four to the tune of seven-tenths in the interests of getting a solid hit-out on his Ducati 955 before heading to Europe next week to contest the World Supersport Championship. 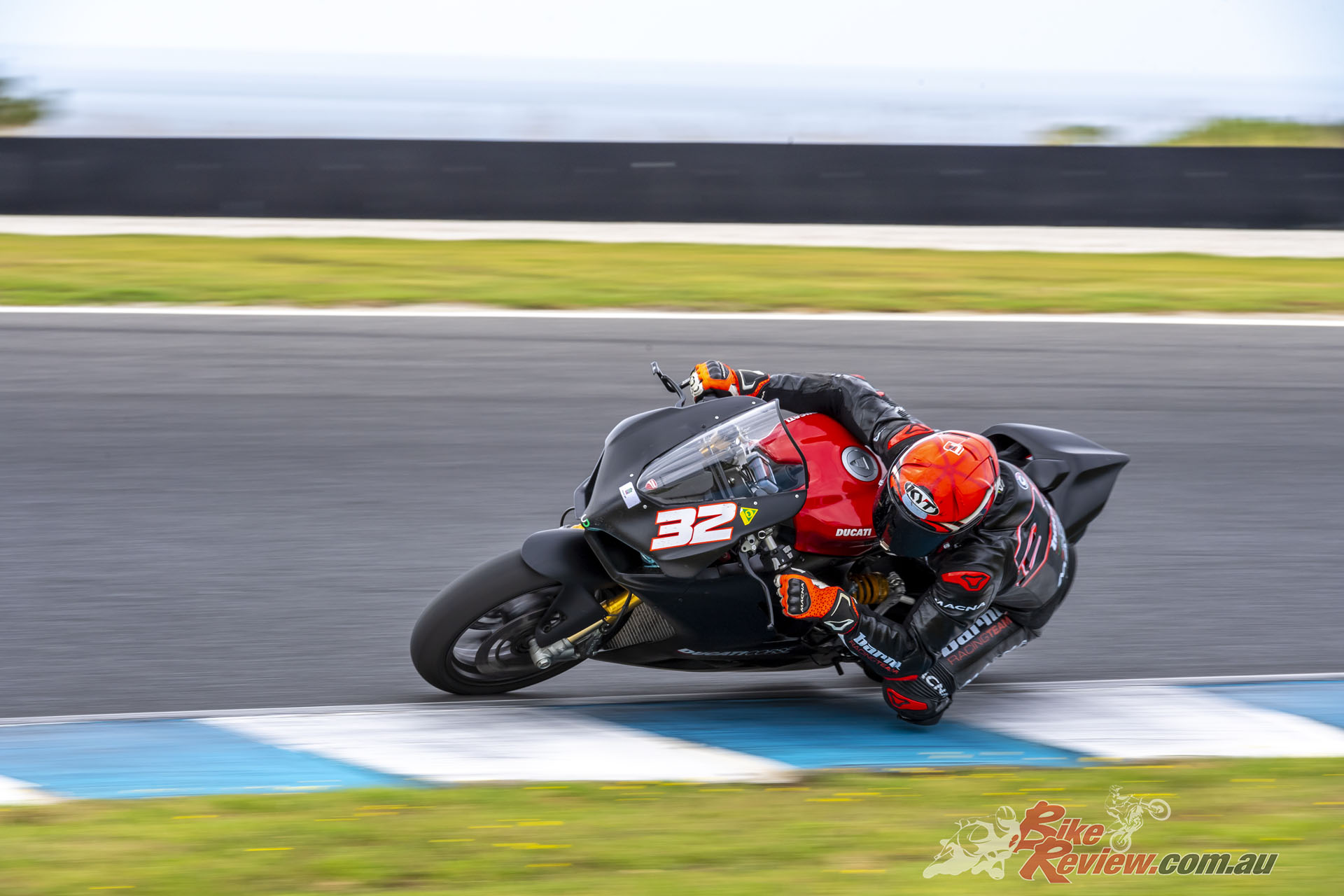 “Oli Bayliss however would trump Edwards in Practice Four to the tune of seven-tenths in the interests of getting a solid hit-out on his Ducati 955.” 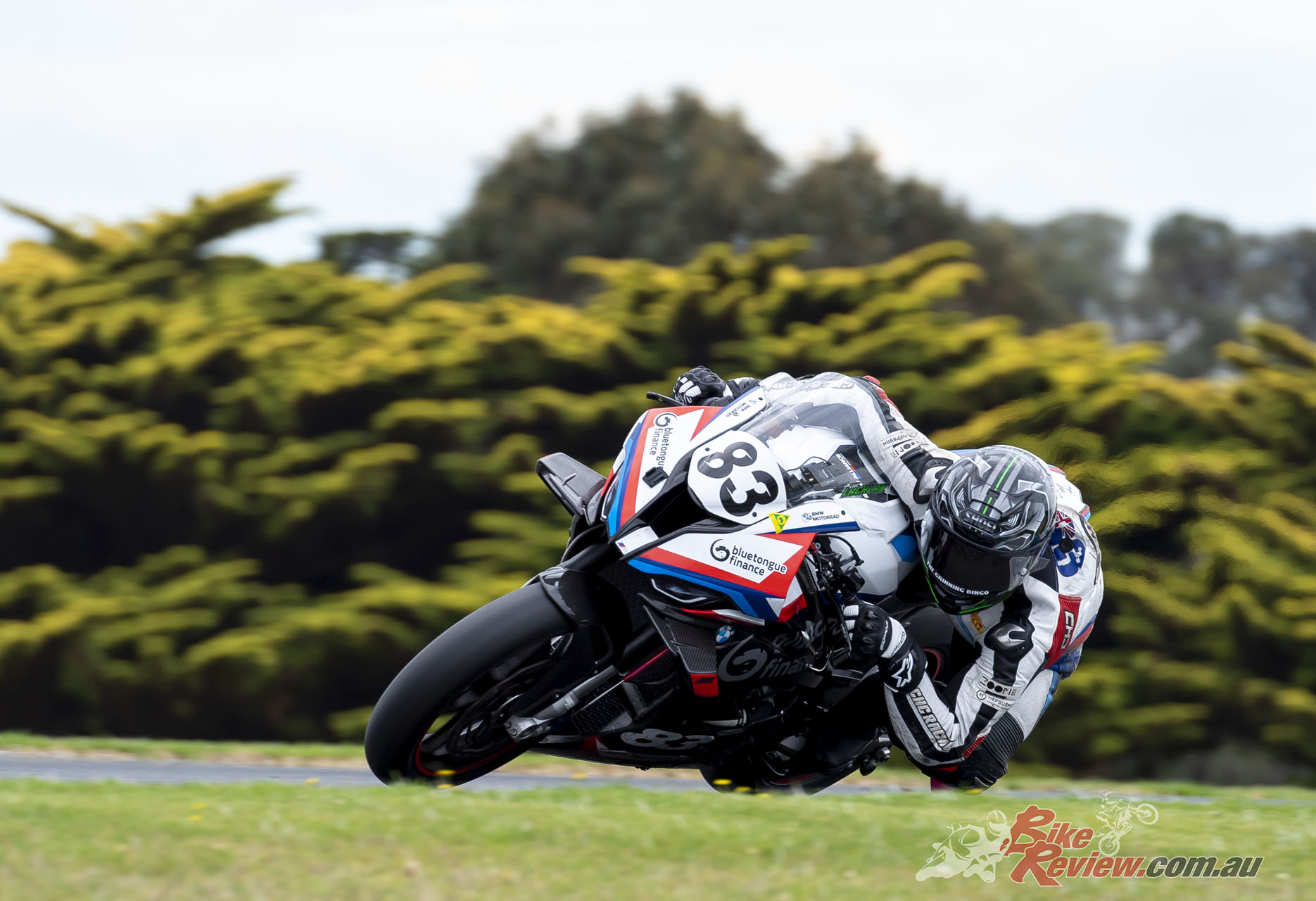 The bLU cRU Oceania Junior Cup was the first opportunity for a number of rookie riders to get to grips with the Yamaha YZF-R15 under the watchful eye of new series coach Garry McCoy. Marcus Hamod was the quickest out of the blocks, shading Harrison Watts by four-tenths of a second, with Levi Russo a further tenth in arrears. In Practice Four, Hamod continued at the, albeit just five-hundredths of a second ahead of Teerin Fleming, who was in turn four-tenth ahead of Ryan Larkin.

Day Two
Day Two of the Official mi-bike Motorcycle Insurance Australian Superbike Championship presented by Motul (ASBK) Test began in dry but humid conditions at Phillip Island. In what turned out to be a reverse of Day 1, torrential rain marred the afternoon, eliminating the prospect of any serious times being set late in the day. 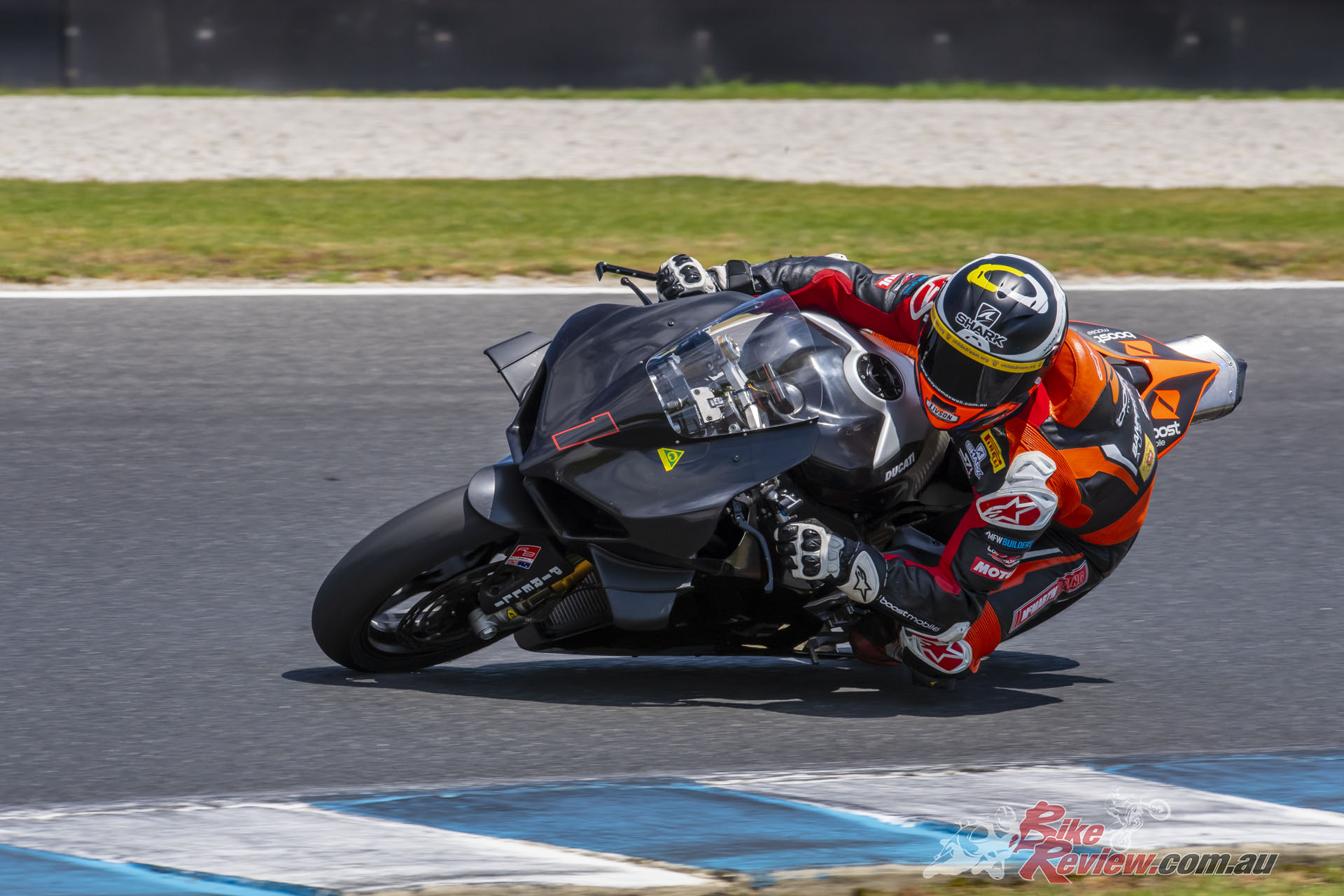 Day one’s front-runner Wayne Maxwell (Ducati V4R) scorched the Phillip Island circuit with a 1:31.848 to head Alpinestars Superbike Practice 5. Last year’s ASBK champion was over a second ahead of Lachlan Epis (BMW MRR), who in-turn enjoyed a one-tenth margin over Cru Halliday (Yamaha YZF-R1). From there it appeared Maxwell had nothing more to prove, preferring to leave his opposition wondering as he sat out the rest of the day. Maxwell was cautiously optimistic about his performance, preferring not to read too much into the test. 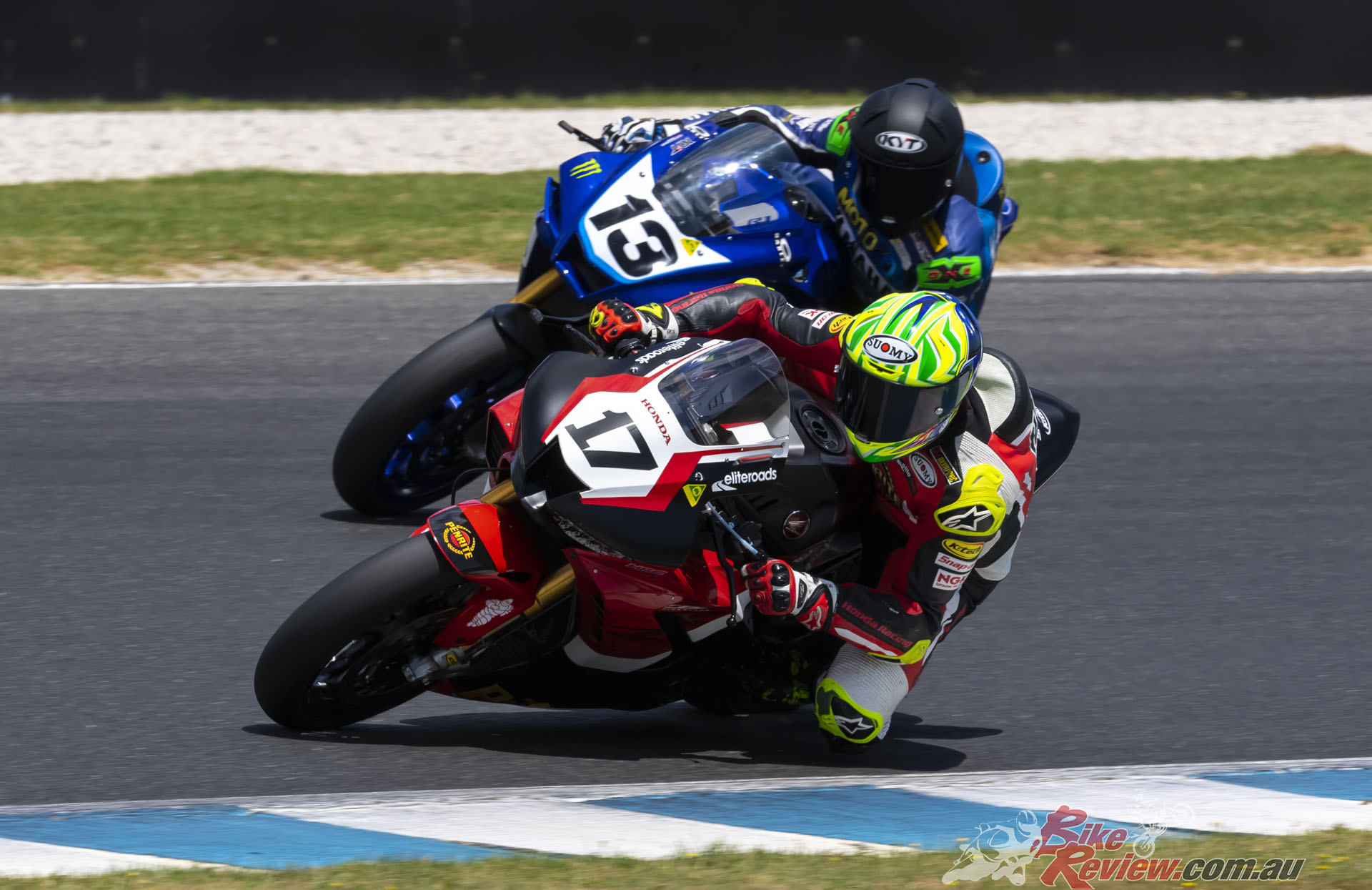 Other riders maximised their testing time at Philip Island after both the 2020 and 2021 seasons were cut short.

“A lot of people are running different programs and a lot of people have changed teams, so they’re trying to find their way on a new bike,” said Maxwell.  “For us we’ve got a bit more continuity than most. Pirelli have worked really hard to bring us some updated tyres, so it’s really worked out and great to be where we are headed into the 2022 season.” 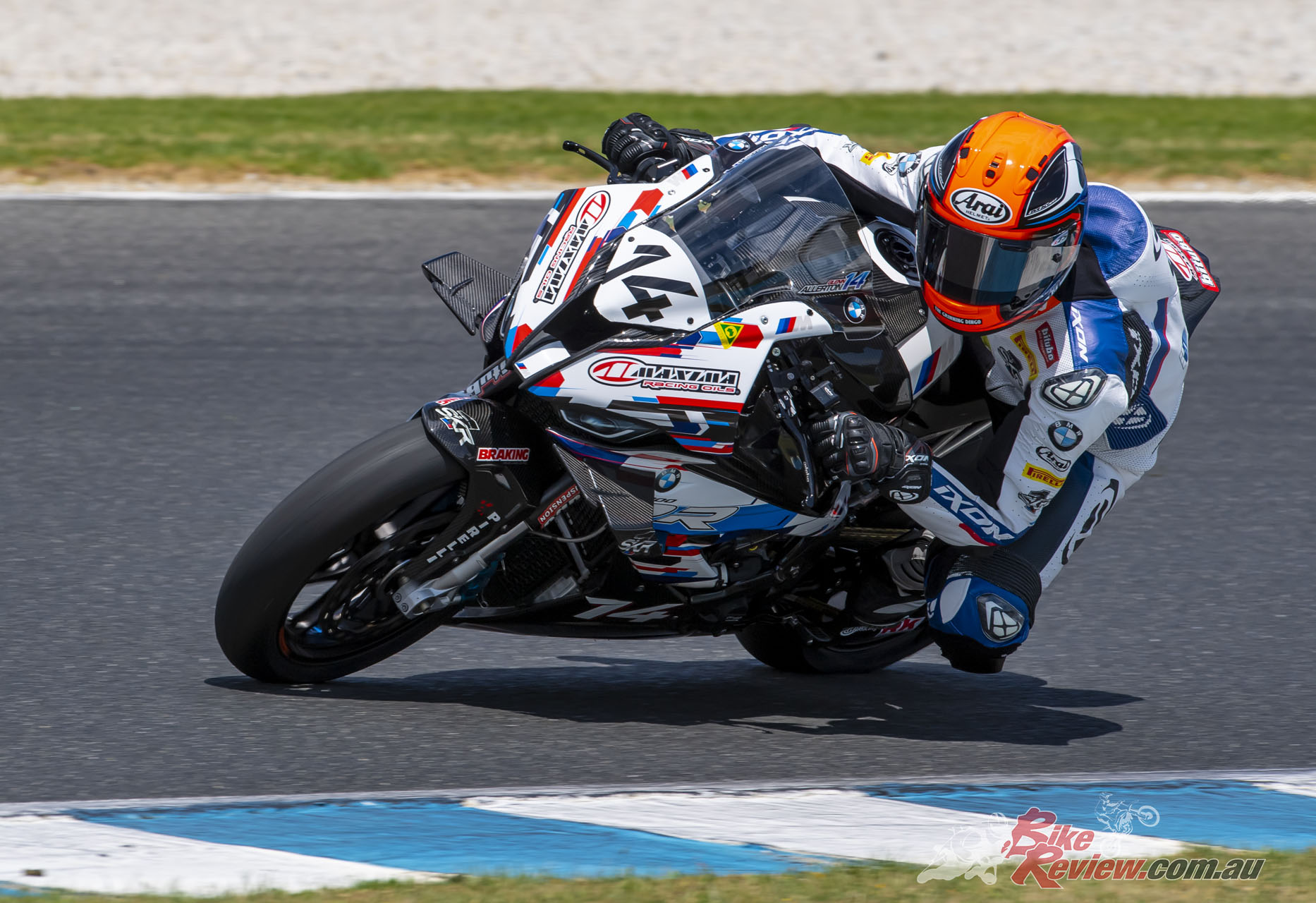 Allerton, Herfoss and Staring are all looking like promising contenders for the ASBK crown this year.

In Maxwell’s absence, Halliday topped the timesheets in Practice 6 with a 1:32.232 to go second overall for the day. Lachlan Epis was six-tenths in arrears, with Marcus Chiodo (Yamaha YZF-R1) a further two-tenths behind in third. Amid increasingly wet conditions, only four riders ventured out for Practice 7. Jed Metcher (Yamaha YZF-R1) led the way with a 1:50.178 with Mike Jones only other rider to set a time with a 2:07.063. 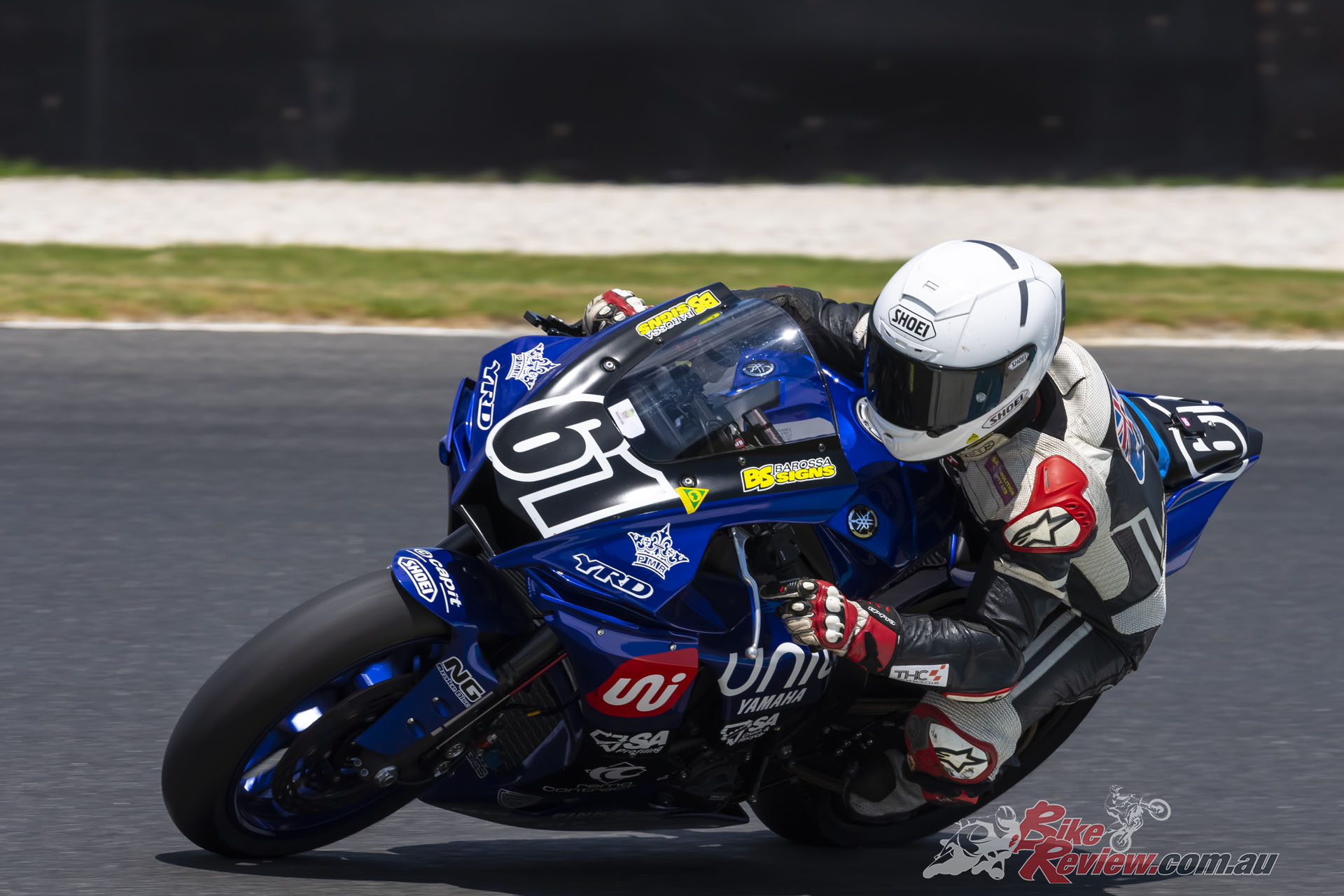 The Supersport field were scrambling to tumble Oli’s time as he gets some practice in before heading overseas to race in the World Supersport Championship! 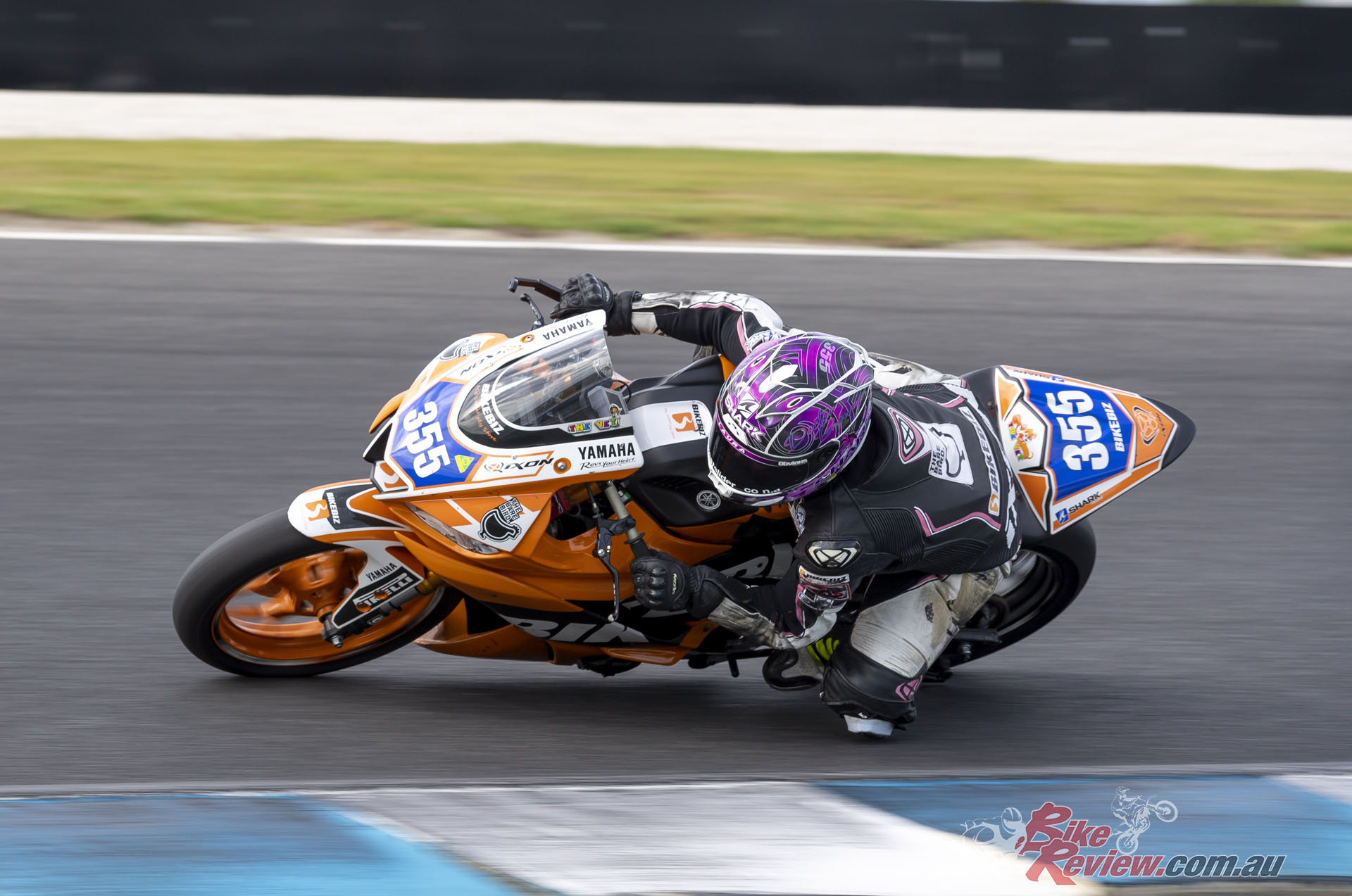 All classes were out during testing. The 300s were keen to get some track time ready to start the season. 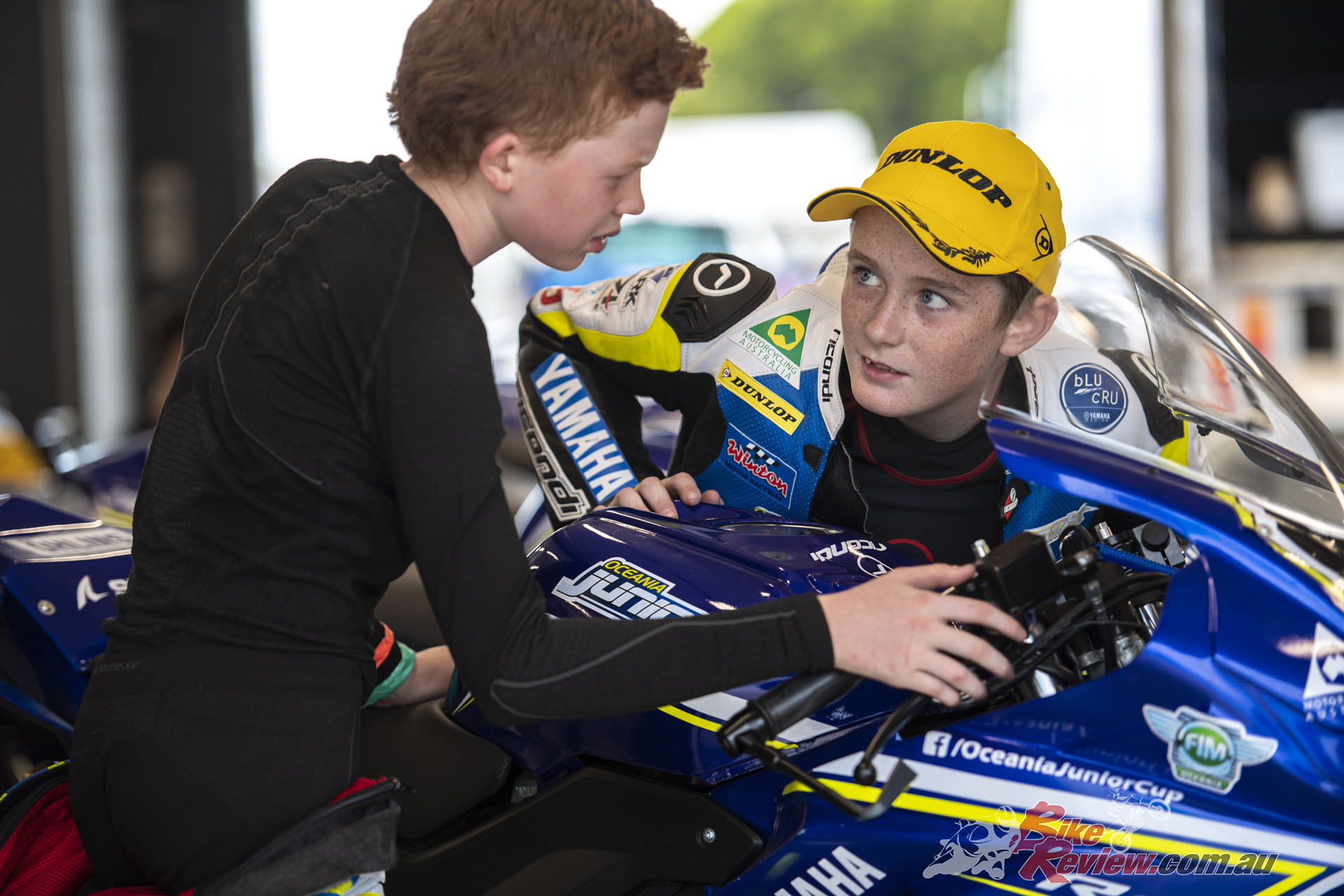 The bLU cRU Oceania Junior Cup riders were keen to put into practice series coach Garry McCoy’s words of wisdom and set about running old rubber to get to grips with tyre wear simulations. With Practice 5 cut short, Ryan Larkin topped the order with a 2:13.540 – half a second ahead of Levi Russo, who was four-tenths ahead of Teerin Fleming. Practice 6 saw a slight mix-up of the order with Jodie Paige leading the way with a 2:12.961 to top the day overall, just over half a second ahead of Larkin and Harrison Watts a further tenth away to round out the top three. 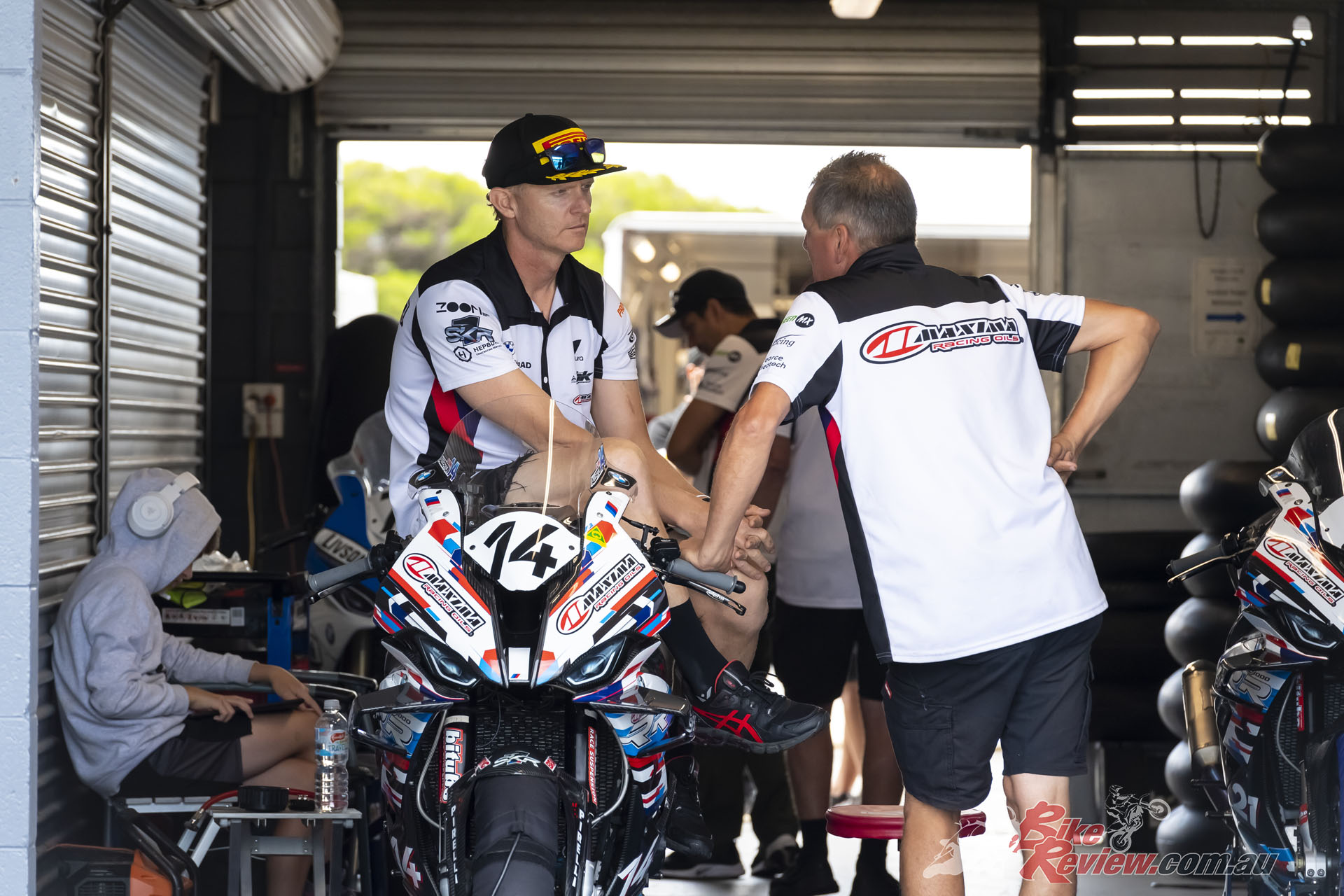 That wraps up the offical 2022 ASBK test! Riders will be battling it out on track starting on the 25th of February.

Practice 7 was run in the dampest conditions of the day, but riders braved the wet, with Sam Drane leading the way with a 2:21.763 – one-tenth ahead of Bodie Paige and Levi Russo, who was a further second behind.