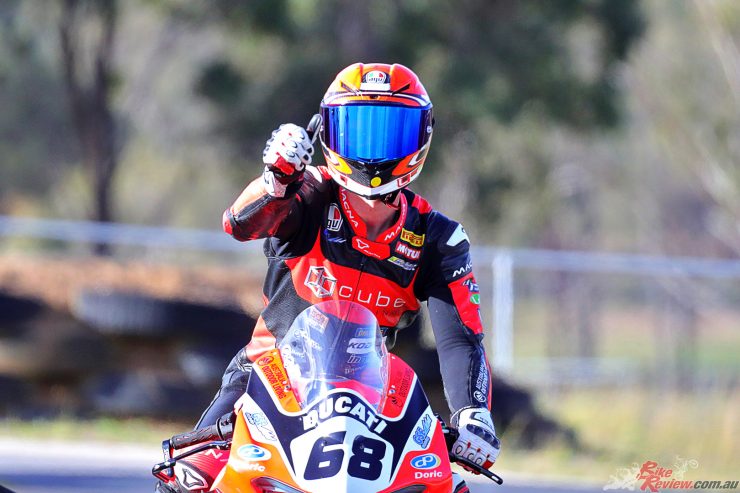 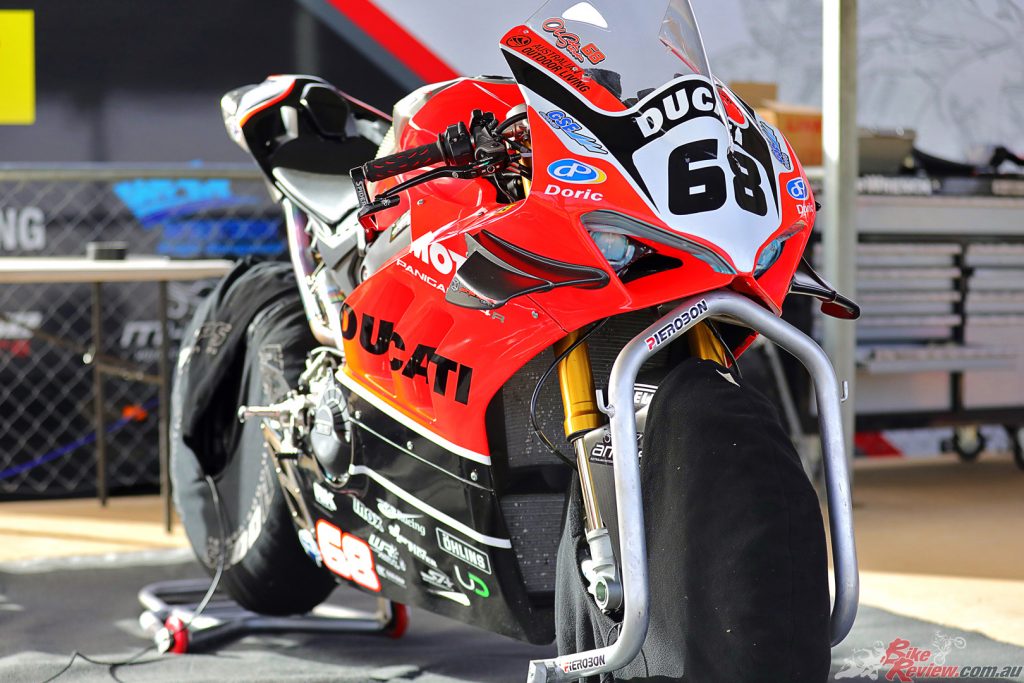 Oli’s V4R Superbike, which he rode at Morgan Park over the weekend and made his Superbike debut on.

Although not a part of the Australian Superbike Championship, the club-run round provided the perfect opportunity for the team to get back to business and go racing. Without the pressure of a championship, the weekend also proved ideal for Oli Bayliss to make his Superbike debut aboard the V4R.

Team Co-Owner, Ben Henry
“We had some challenges over the weekend with cold temps and wind, and it wasn’t a perfect weekend in that we didn’t clean sweep the racing, but it was a great weekend and I’m really happy. Twice, Mike rode through the field to finish on the podium, setting lap records in the process and Oli was really consistent, going faster and faster, and even putting a pass on (Aiden) Wagner to take second in the final race!

“In the end, the important part wasn’t the race results, but lap times, reactions and how we performed as a team, and in that, I’m really happy. Mike showed why he’s the current ASBK champion, and Oli showed everyone that he’s ready to race a Superbike”. 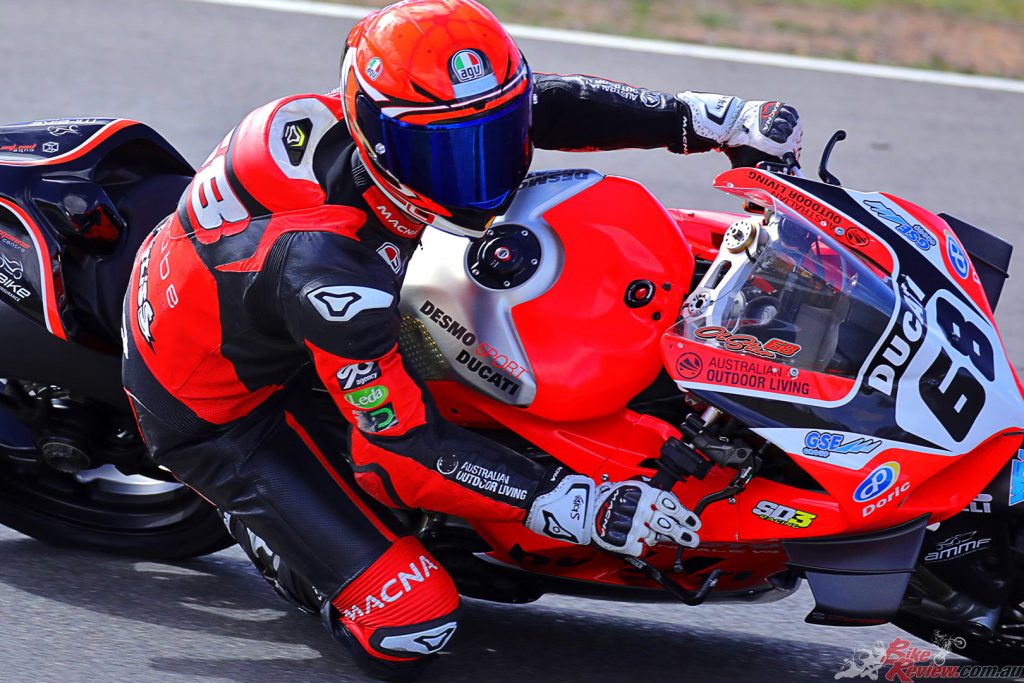 “In the end, the important part wasn’t the race results, but lap times, reactions and how we performed as a team”

Team Co-Owner, Troy Bayliss
“I’m glad we made the decision to put Oli on the V4R. The way he rode proved what we all thought, that he was ready to make the next step and I’m really proud of what he did this weekend, on both the Superbike and the 600. He had a few moments out there, but kept his head, made smart decisions, set quick lap times for the conditions and brought the bike back in one piece.

“For Mike, he put in another solid display that we’ve come to expect from him. Even starting from pitlane just proved to light a fire, and to be honest, I think he enjoyed the challenge. I think some of the club guys got a buzz from Jonesy coming through the field making 17 passes in 7 laps too”. 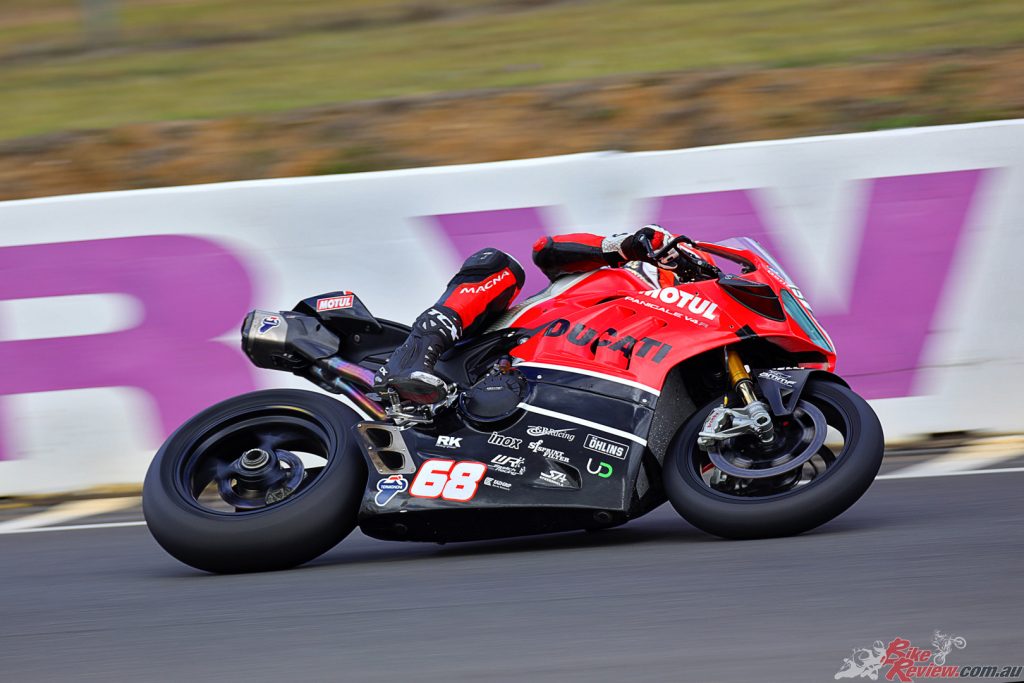 “I was impressed with Oli’s results over the weekend too, and I’m glad I could help him this weekend” Mike Jones.

Mike Jones:
“That was such a fun weekend! A big thank you to the club, volunteers and officials that made it possible for us to go racing, it just felt good to get back on the bike and actually go racing again. Although I would’ve loved to clean-sweep all the superbike races, it wasn’t to be this weekend, but we had a lot of positives to take from it.

“We were racing at a pace that I think we would be close to at ASBK with the track conditions, and I got plenty of opportunities to make solid, clean passes on my way through the field. I was able to lead from the front, defend my position and take some wins. I was impressed with Oli’s results over the weekend too, and I’m glad I could help him this weekend along with the rest of the team.” 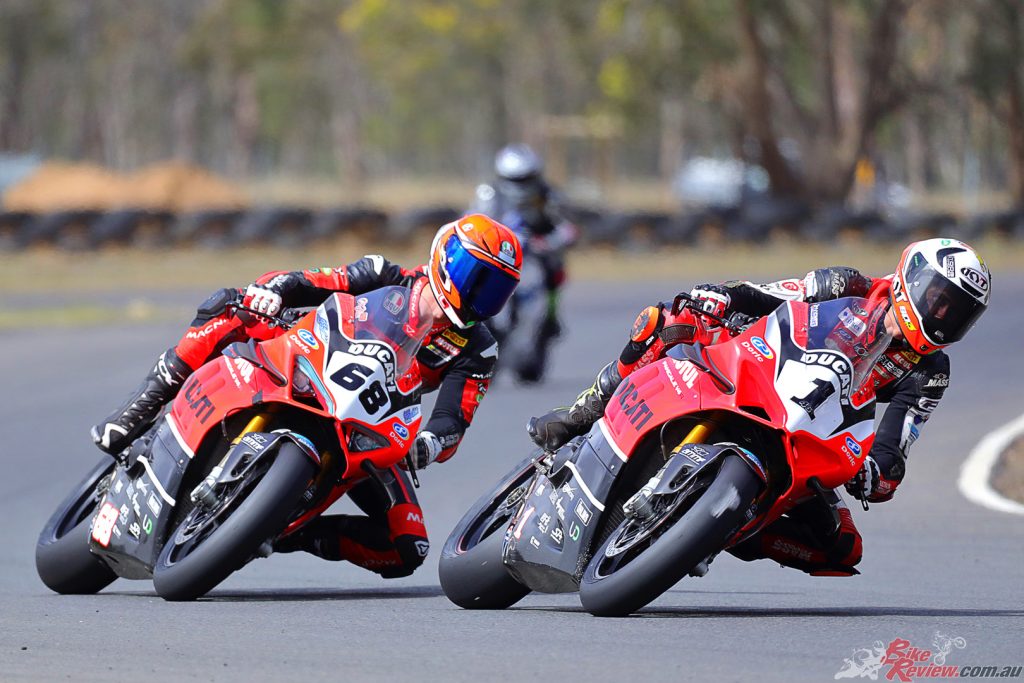 “The V4R is definitely a challenge, and there’s a lot more to learn…” Oli Bayliss on his Superbike debut.

Oli Bayliss:
“Once we got things setup for me, I felt really comfortable on the bike and I’m really happy to be on it. The way it handled and stopped, it didn’t feel too different to the 600 to be honest, but the power and speed of the V4R is incredible. I’m really grateful to Ben (Henry) and Dad for giving me the chance to ride the bike, and also to Chris (Jones) for helping set the bike up for me.

“Morgan Park is where I basically started my road racing career, and every bike I’ve ridden, I’ve ridden here first so it makes sense that I get to race a Superbike here first too. Mike (Jones) gave me some great advice over the weekend, and to race with guys like him and Aiden (Wagner) just gave me even more confidence. The V4R is definitely a challenge, and there’s a lot more to learn, but it was great to line up at a race again, and to put two DesmoSport Ducati V4R’s on the podium this weekend!”