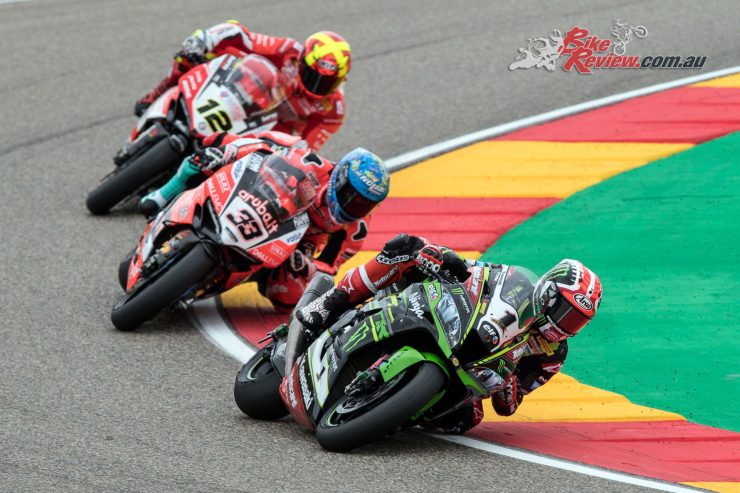 Jonathan Rea (Kawasaki Racing Team WorldSBK) had mixed feelings about his bike throughout Friday and the Saturday Superpole, but in race one of the MOTUL FIM Superbike World Championship Round 3 he put to bed any worries he or his team may have had with a dominant performance at Spain’s Aragon circuit. The reigning champion increases his lead to 14 points after race one, after Marco Melandri (Aruba.it Racing – Ducati) could only come in fourth. 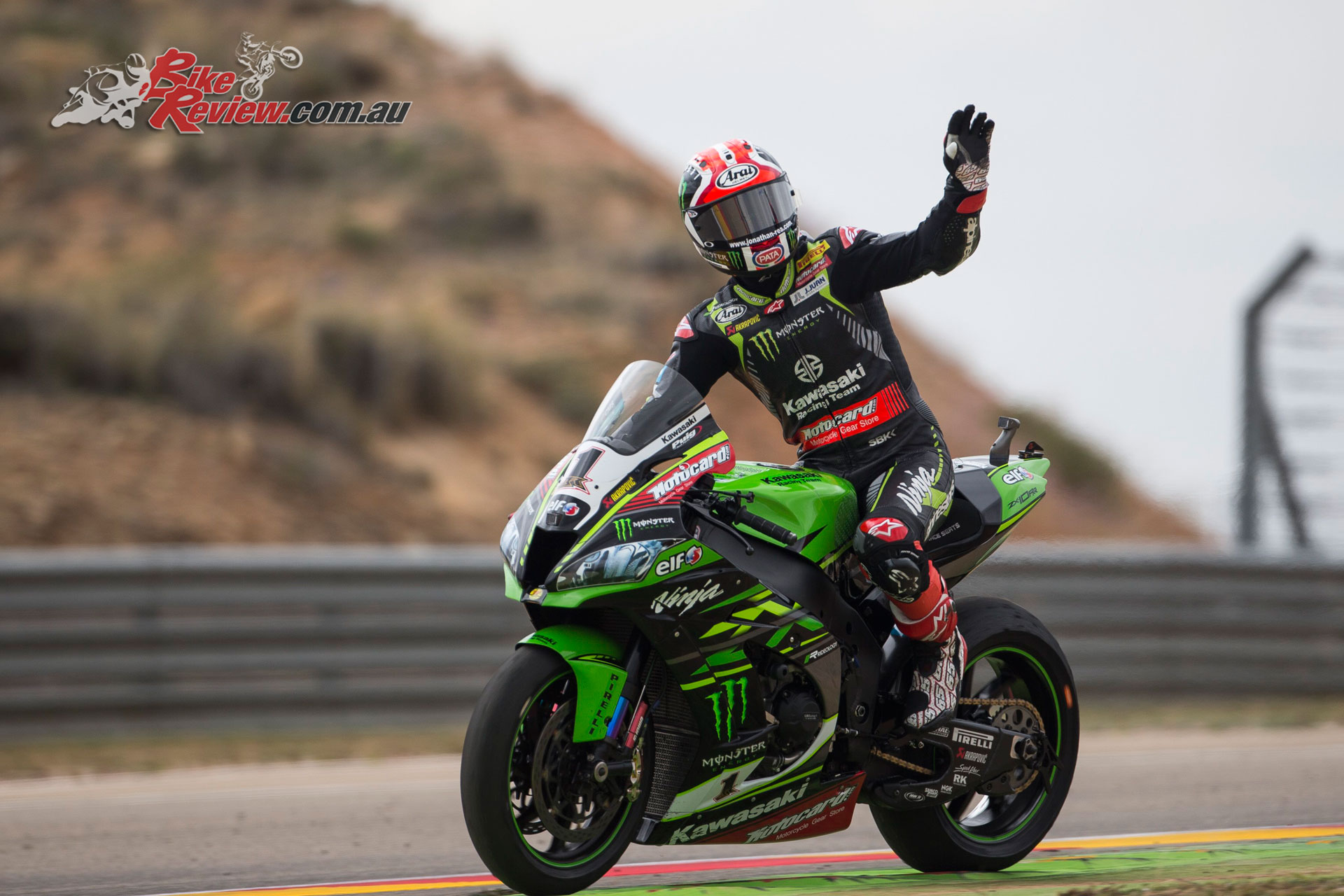 The race was red flagged after three laps, after a collision involving Leon Camier (Red Bull Honda World Superbike Team), Jordi Torres (MV Agusta Reparto Corse) and Lorenzo Savadori (Milwaukee Aprilia). The Honda rider appeared to slip on turn 10, with the other two riders just behind and unable to avoid contact. The Brit was immediately taken to the medical centre for evaluation, while Torres and Savadori exited the track on their own feet, although the Spaniard could not make the restart in time.

Before the incident, a wild start had completely turned over the starting grid for race one. Poleman Marco Melandri moved down to fifth in lap 1, with Rea taking the lead ahead of Alex Lowes (Pata Yamaha Official WorldSBK Team), up from fifth. Behind them, Chaz Davies (Aruba.it Racing – Ducati) had made an extraordinary start, coming through from 11th to 4th in just one lap. 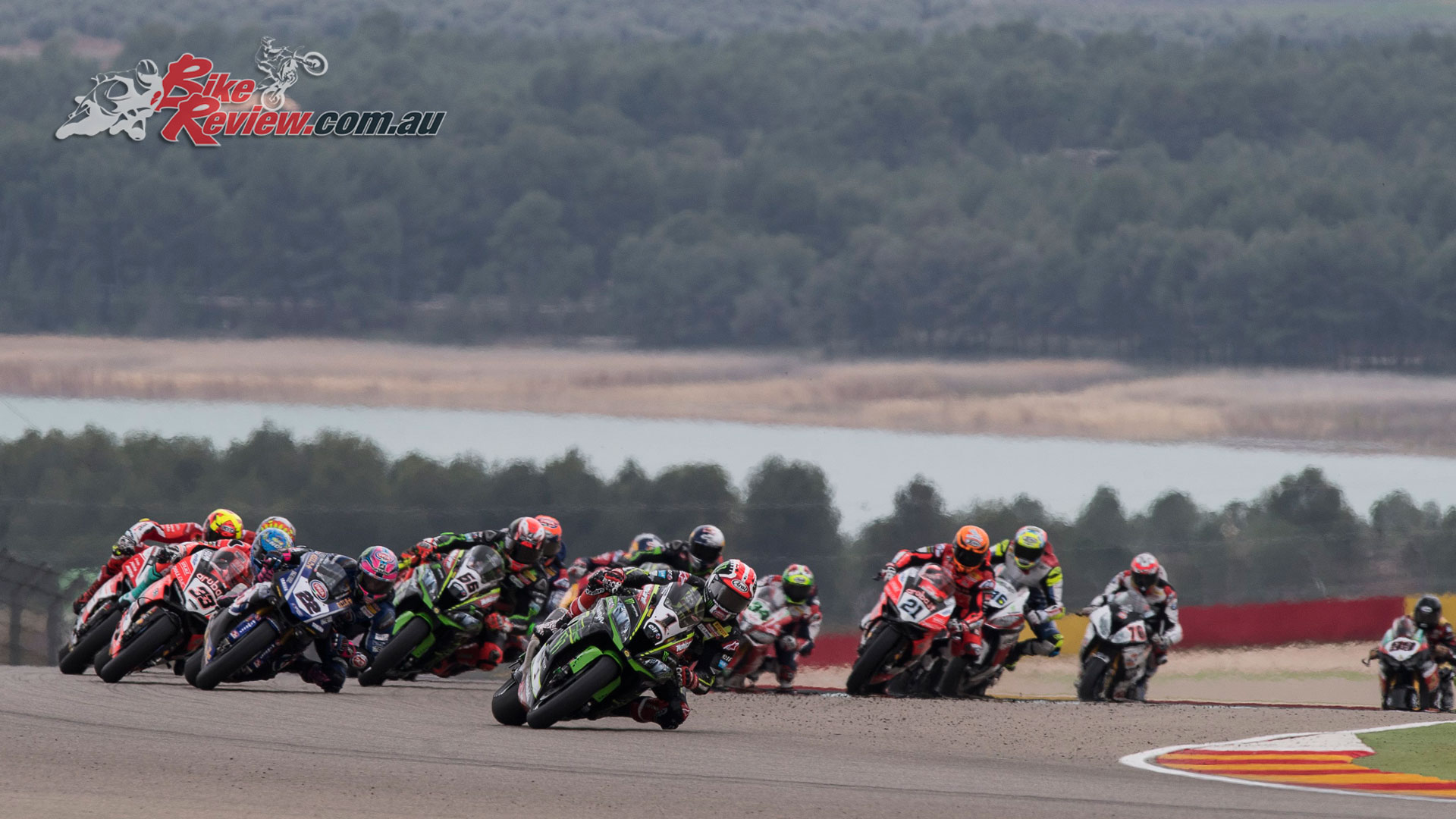 After the restart, it was Rea again at the top, leading the first half of the new race bar one lap from Lowes. The champion later found himself under pressure from Xavi Fores (Barni Racing Team), who made his move over the Northern Irishman with just 9 laps to go, taking the lead in front of his home fans. But, ultimately, Rea found his moment a couple of laps later, racing away from the Spaniard and taking his second win of the season.

The final laps displayed an extraordinary three-way Ducati fight for the podium, between Fores, Melandri, and Davies, up the field again. With Melandri going long with two laps to go, it was a fantastic race to the finish between Davies and Fores, exchanging places throughout the final lap and with the Welshman just squeezing ahead at the chequered flag. 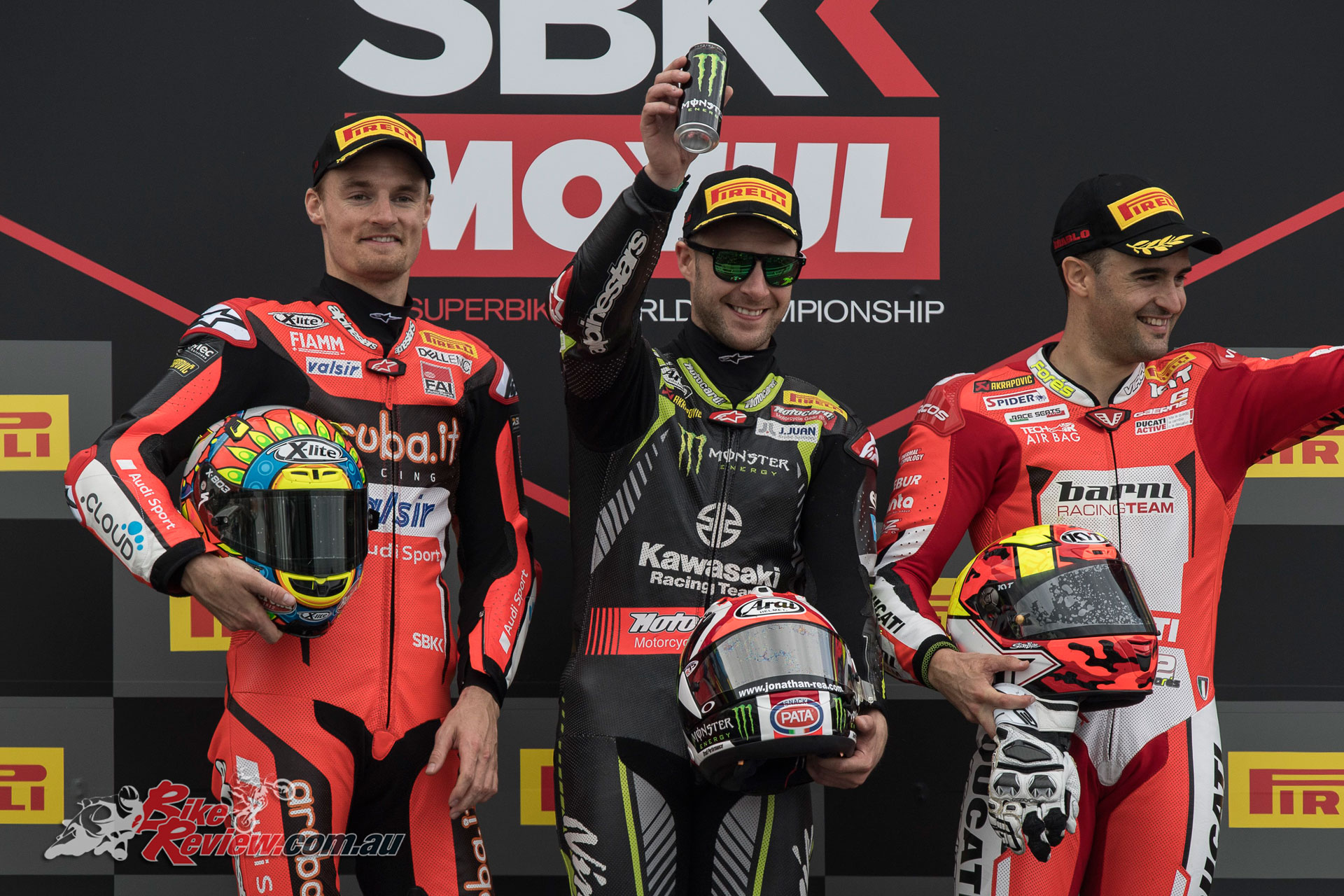 Behind them, Michael van der Mark (Pata Yamaha Official WorldSBK Team) came in fifth, leaving him in a promising position for race two. The British pair of Sykes and Lowes followed in sixth and seventh, with Michael Ruben Rinaldi (Aruba.it Racing – Junior Team) taking a good eighth position on his WorldSBK debut.

At the back, a thrilling battle emerged for ninth, and thus a privileged starting position in tomorrow’s race two. At the end, it was Toprak Razgatlioglu (Kawasaki Puccetti Racing) who came in ahead of the pack, with three more riders less than a second away.

Update on condition of Leon Camier

In an incident during Race 1 at the Aragón WorldSBK round, Red Bull Honda World Superbike Team rider Leon Camier was injured. Leon was attended to by Clinica Mobile staff at MotorLand Aragón circuit and afterwards was sent to Alcañiz Hospital for further assessment. Following the hospital’s prognosis, the Red Bull Honda World Superbike Team confirmed he would not participate in Race 2 of the Aragón WorldSBK round and provide the following update on Leon’s condition:

Leon has been diagnosed with a closed chest injury: a fracture of the posterior ribs 9, 10 and 11 on his left side with a lung contusion. His condition is stable. Leon is conscious and in good spirits and the team would like to thank all his fans and supporters for their well wishes.

There are very few certainties in the WorldSBK calendar – but a Chaz Davies (Aruba.it Racing – Ducati) and Jonathan Rea (Kawasaki Racing Team WorldSBK) battle at MotorLand Aragon seems as close as you can get. In a repeat of last year’s Aragon round, the two leading riders of the championship clashed sensationally in the final laps of Aragon race two, with the Welshman avoiding a first Rea double of the season and taking his second win of the 2018 MOTUL FIM Superbike World Championship, and a record seventh around the Aragon bends. 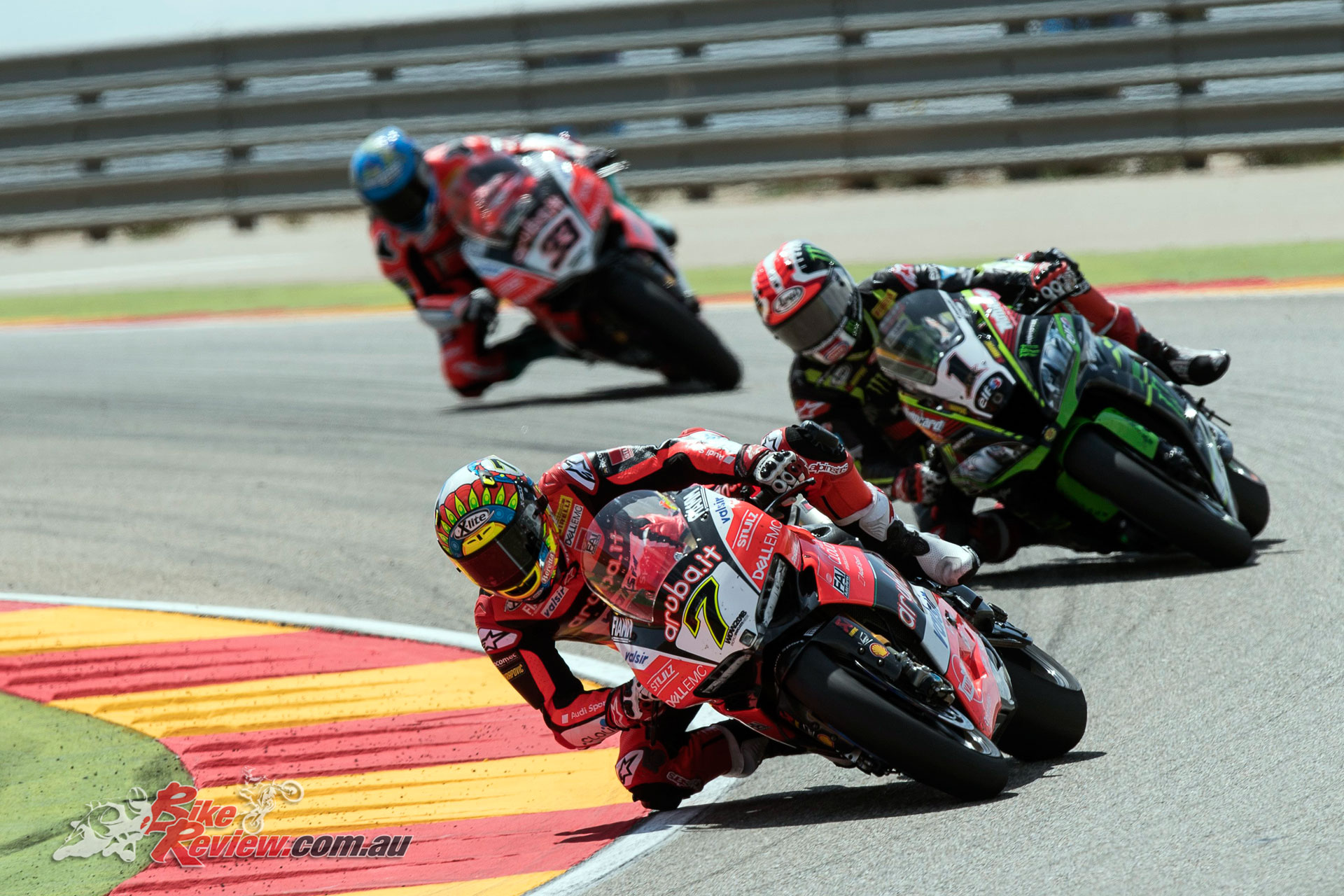 The race start was similar to yesterday’s affair. Again, it was Rea sticking amongst the Ducatis at the front, with the Panigale R showing incredible pace at the Alcañiz circuit. This time it was Xavi Fores (Aruba.it Racing – Junior Team) and Melandri heading the early laps, with a calculating Rea waiting behind.

Just one mistake is enough for the reigning champion to pounce, and as it happened there were two. First a wobble from Melandri (who has had some worrying difficulties controlling the bike throughout the weekend, despite showing very good rhythm) allowed Rea to move up to second.

Fores, looking for his first win in front of his passionate local fans, held his provisional lead well under Rea’s pressure – until lap 9, when his front-end gave in and left the Spaniard on the floor. 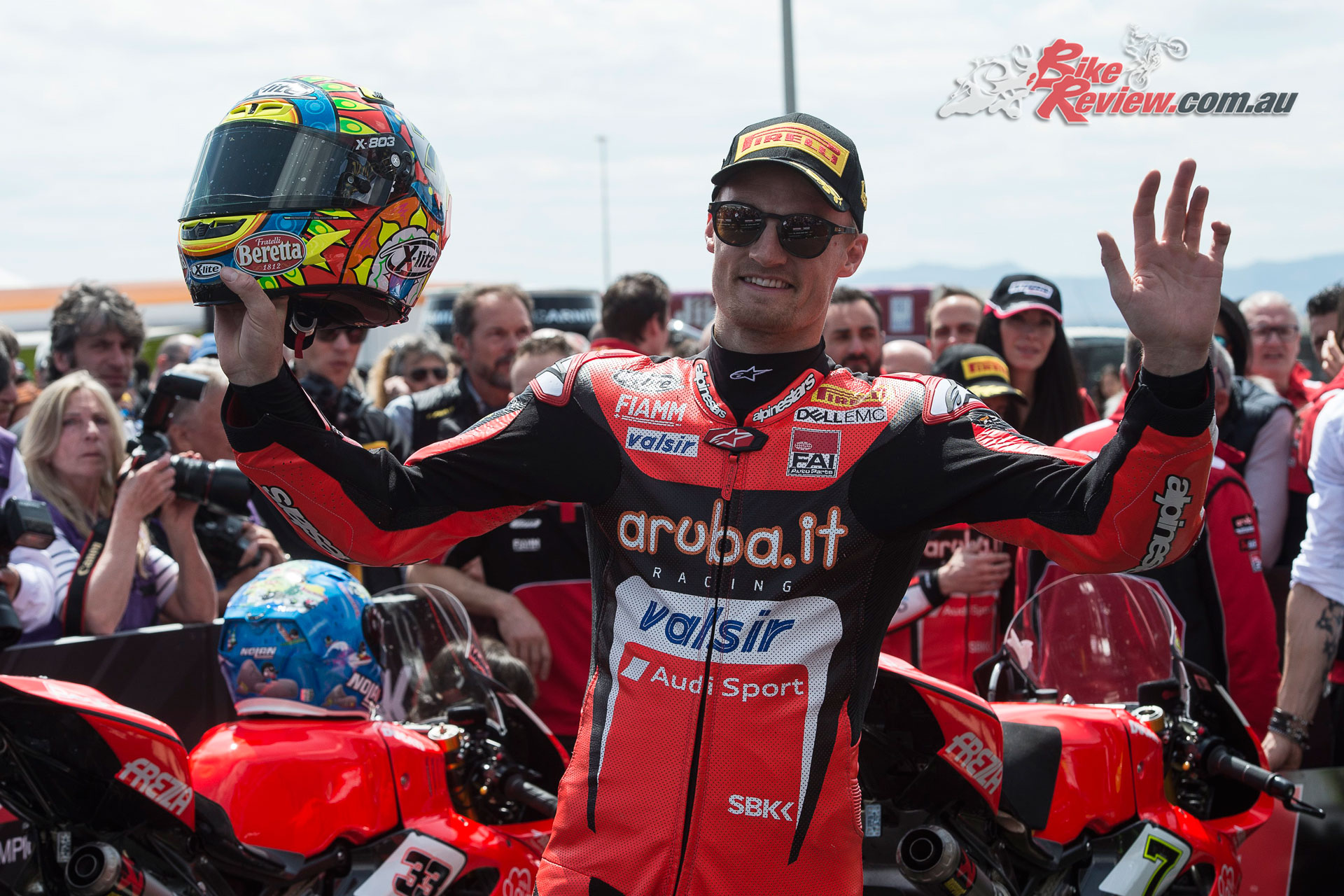 But, with one Ducati rider leaving the leading group, in came another. Chaz Davies didn’t have the amazing start he did in race one, but quietly he benefitted from the action at the front to creep up to Rea and Melandri, picking off the Yamahas along the way. He was too far back to greatly trouble Rea in yesterday’s Race 1, his Superpole 2 slip a disadvantage too large to overcome. But on Sunday, with five laps to go and having already overcome his teammate, he got past the Northern Irishman. With the pair coming in close into the final lap and ready for a photo finish, Rea went wide in the middle sector, handing Davies a phenomenal win.

Tom Sykes (Kawasaki Racing Team WorldSBK) suffered a nightmare race off the grid, falling from third to eighth at the first turn, with Davies in ninth passing him shortly after. The Brit fought back to sixth at the checkered flag, but will be disappointed at his results throughout the weekend after two front-row starts. 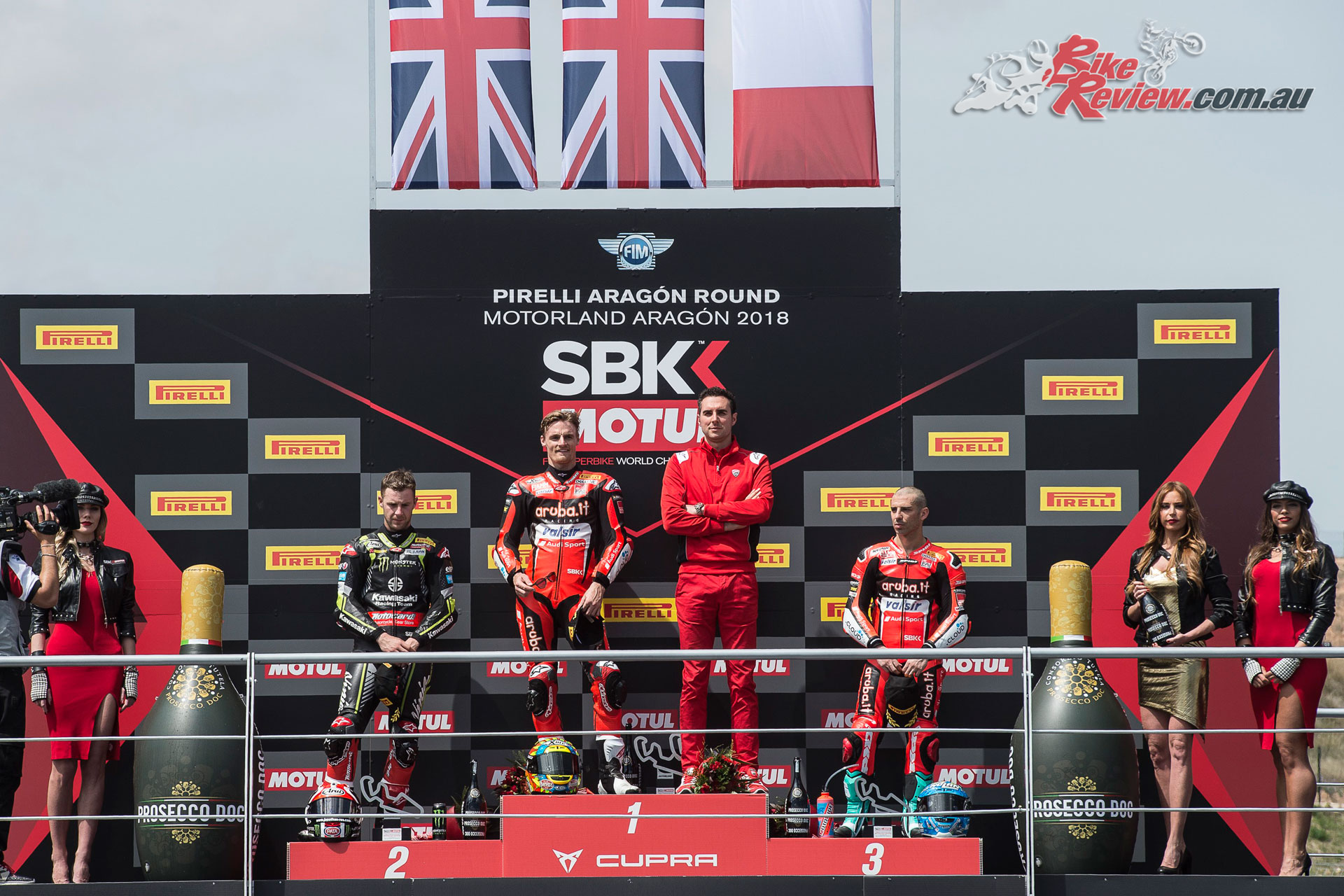 Championship leader board after Round 3

Third time’s the charm for Sandro Cortese (Kallio Racing), as the German made good of his first FIM Supersport World Championship Superpole to grab his first win. Only three races into his World Supersport career, he led his Yamaha back into first place after a poor start and dominated the latter two-thirds of the race, with only Federico Caricasulo (GRT Yamaha Official WorldSSP Team) endangering the German’s lead.

This is the first victory for Cortese since 2012, when he met the chequered flag in the penultimate race of his Moto3 championship-winning season. A huge win and a return to the podium, after missing out at the Chang International Circuit, moving now just four points away from defending champion Lucas Mahias (GRT Yamaha Official WorldSSP Team) who could only come in fourth. The Frenchman couldn’t keep up with the leading pace from the halfway mark and finished 5 seconds off the podium places.

Teammate Caricasulo was the only rider to give Cortese problems in the latter stages of the race, coming as close as two tenths of a second off the lead. Unable to make a pass, he eventually had to defend his position in the final laps from Jules Cluzel (NRT), who completed the podium.

Far behind the leading four, an electric battle for fifth position took place around the final laps at MotorLand Aragon, with the British pair of Kyle Smith (GEMAR Team Lorini) and Luke Stapleford (Profile Racing) just edging ahead of Sheridan Morais (Kawasaki Puccetti Racing), returning to WorldSSP this weekend.

Previous championship leader and Thai race-winner Randy Krummenacher (BARDAHL Evan Bros. WorldSSP Team) went down on lap four and fell back to 27th position. The Swiss did manage to fight back to 11th, minimising damages and scoring what could end up being vital points at the year-end.

Raffaele de Rosa (MV Agusta Reparto Corse by Vamag) made a fantastic start, dashing off the line from the second row straight into first place by the first turn. The Italian was performing admirably with the MV Agusta amongst the front-group Yamahas, fighting for his first podium finish of the season, but an unfortunate technical issue put his race to rest halfway through. On the same lap, Ayrton Badovini (MV Agusta Reparto Corse by Vamag) crashed on Turn 7, completing a disastrous race for the MV Agustas.

Completing the top ten, it was Niki Tuuli (CIA Landlord Insurance Honda) in eighth, just creeping ahead of Anthony West (EAB antwest Racing) in ninth, with Rob Hartog (Team Hartog – Against Cancer) making in in tenth place and as the first FIM Europe Supersport Cup rider.

World SSP Championship points after Round 3