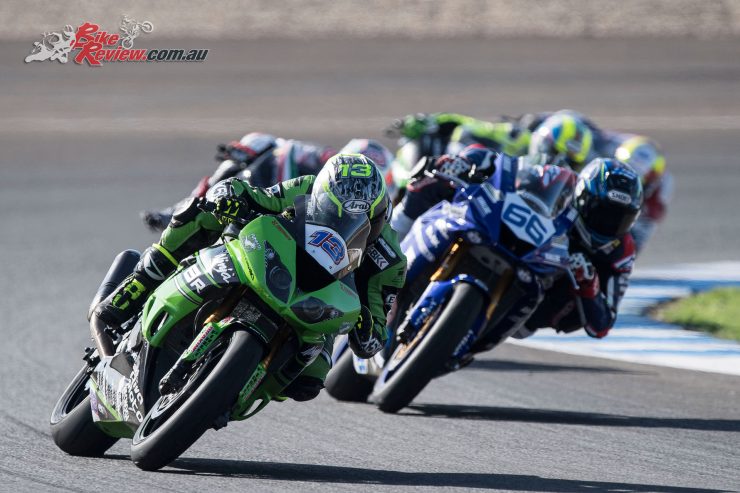 Rea takes the double at Jerez – Westy third in WSSP

At the Pirelli Spanish Round it was triple World Champion Jonathan Rea (Kawasaki Racing Team) who took the victory in race two on Sunday to complete a fine weekend at round 12 at the Circuito de Jerez. 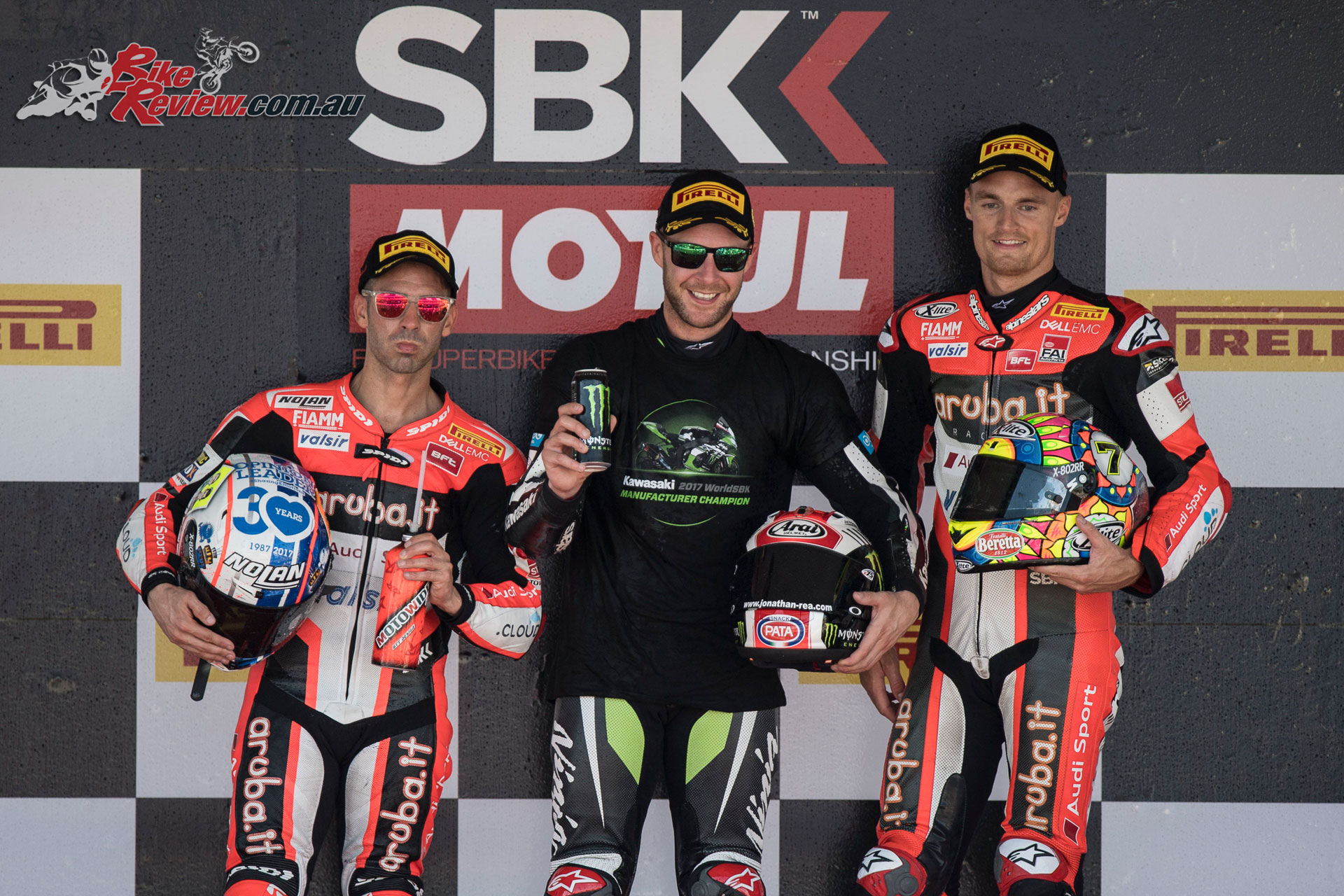 Northern Irishman Rea notched a double win at a venue where he had not previously tasted victory, the KRT man riding in a confident and relaxed manner having wrapped up an unprecedented third successive title three weeks ago in France. Rea went from ninth on the grid to first place by the end of the first lap, overtaking Michael van der Mark (Pata Yamaha Official WorldSBK Team) cleanly at the second attempt to remain at the front from early in lap 2.

Rea did not look back from there and crossed the line 2.7s seconds ahead of Melandri, who got the better of his teammate Davies in the final stages of the race. The result gave Kawasaki the 2017 WorldSBK Manufacturers’ title.

There were good battles throughout the field behind the front runners with Alex Lowes (Pata Yamaha Official WorldSBK Team) finishing fourth and Tom Sykes (Kawasaki Racing Team) fifth. Van der Mark was sixth after leading on the first lap and having had a clash with Melandri early in the race. 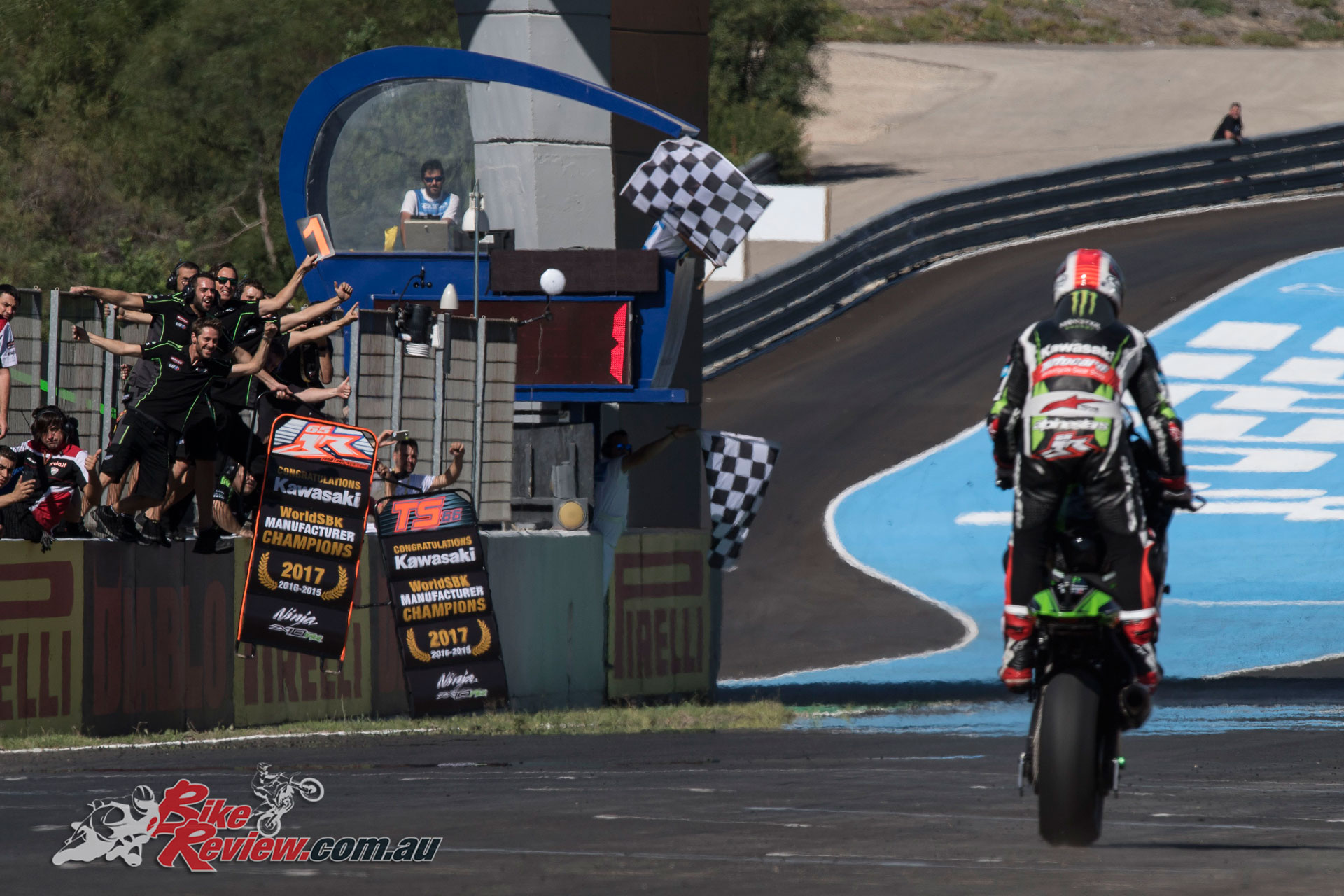 Xavi Fores (BARNI Racing Team) was seventh, after a good battle with 2014 World Champion Sylvain Guintoli – who returned to action on the Kawasaki ZX-10RR this weekend. Frenchman Guintoli will also ride for Kawasaki Puccetti Racing at the final round of the season in Qatar next month. Leandro Mercado (IODARacing) and Jordi Torres (Althea BMW Racing Team) completed the top ten.

Davide Giugliano (Red Bull Honda World Superbike Team) was given a ride through penalty after speeding in pit lane having been forced to return to his garage due to an issue midrace. He eventually finished 17th, after suffering a DNF on Saturday. Lorenzo Savadori (Milwaukee Aprilia) was 18th after he crashed out on the first lap of the restarted race.

A red flag had been shown after first lap incidents in the initial race, which saw Davies and Eugene Laverty (Milwaukee Aprilia) both down at turn two and then Dominic Schmitter (eighty one HPC-Power Suzuki Racing) needing assistance from medical staff at trackside after crashing heavily on the Suzuki GSX-R1000. 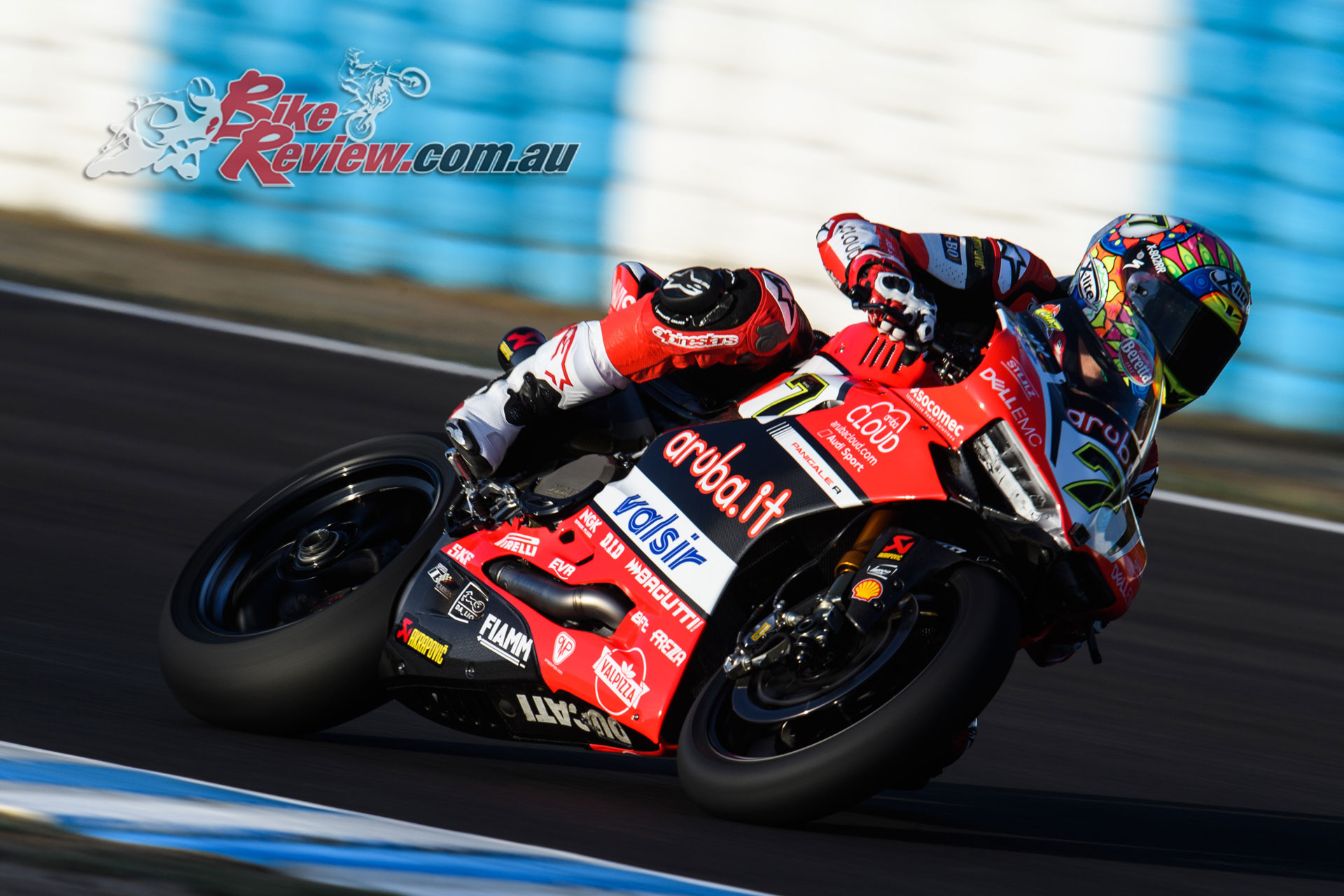 Davies’ team worked hard as the riders prepared for a restart 20 minutes after the original race had begun, with the Ducati Panigale R requiring some quick repairs in order for the Welshman to return to the starting grid for the second getaway. Laverty was also due on the grid for the restart however he had to return to pit lane for another tweak to his Aprilia RSV4 RF just before the second start – as his tough season continued. He eventually restarted from pit lane and was ultimately unable to finish the shortened 19 lap second race.

The last round of the 2017 MOTUL FIM Superbike World Championship – the Acerbis Qatar Round – takes place from Thursday 2nd November to Saturday 4th November, under the floodlights in the desert at the Losail International Circuit.   The fight for 2nd and third will be intense, with both Chaz Davies and Tom Sykes sitting on 363 points. 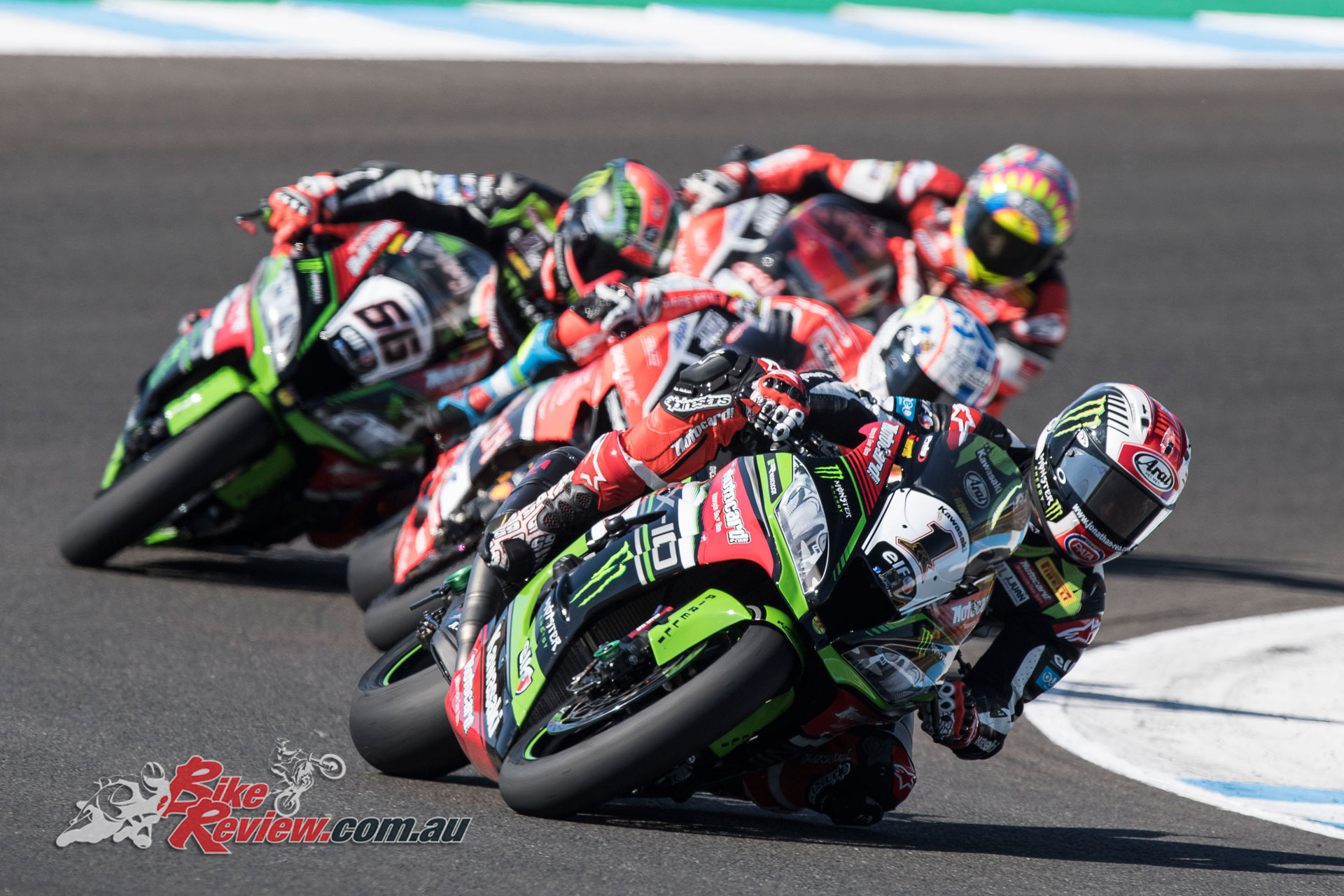 With his first ever win at Jerez, Rea was joined on the podium at the end of a restarted race one at round 12 by Chaz Davies (Aruba.it Racing – Ducati) and Tom Sykes (Kawasaki Racing Team).

On his way to equalling Carl Fogarty’s career podium record of 109 rostrum results in WorldSBK Rea took over at the front after Melandri pulled off with a problem with four laps to go.

Rea had taken control of the restarted race in the early stages and led for several laps before Melandri made a move with 13 laps to go at turn 9 up the inside of the Northern Irishman. Davies then followed Melandri through to overtake Rea, but Rea soon responded to retake the Welshman and slot back in behind the Italian. 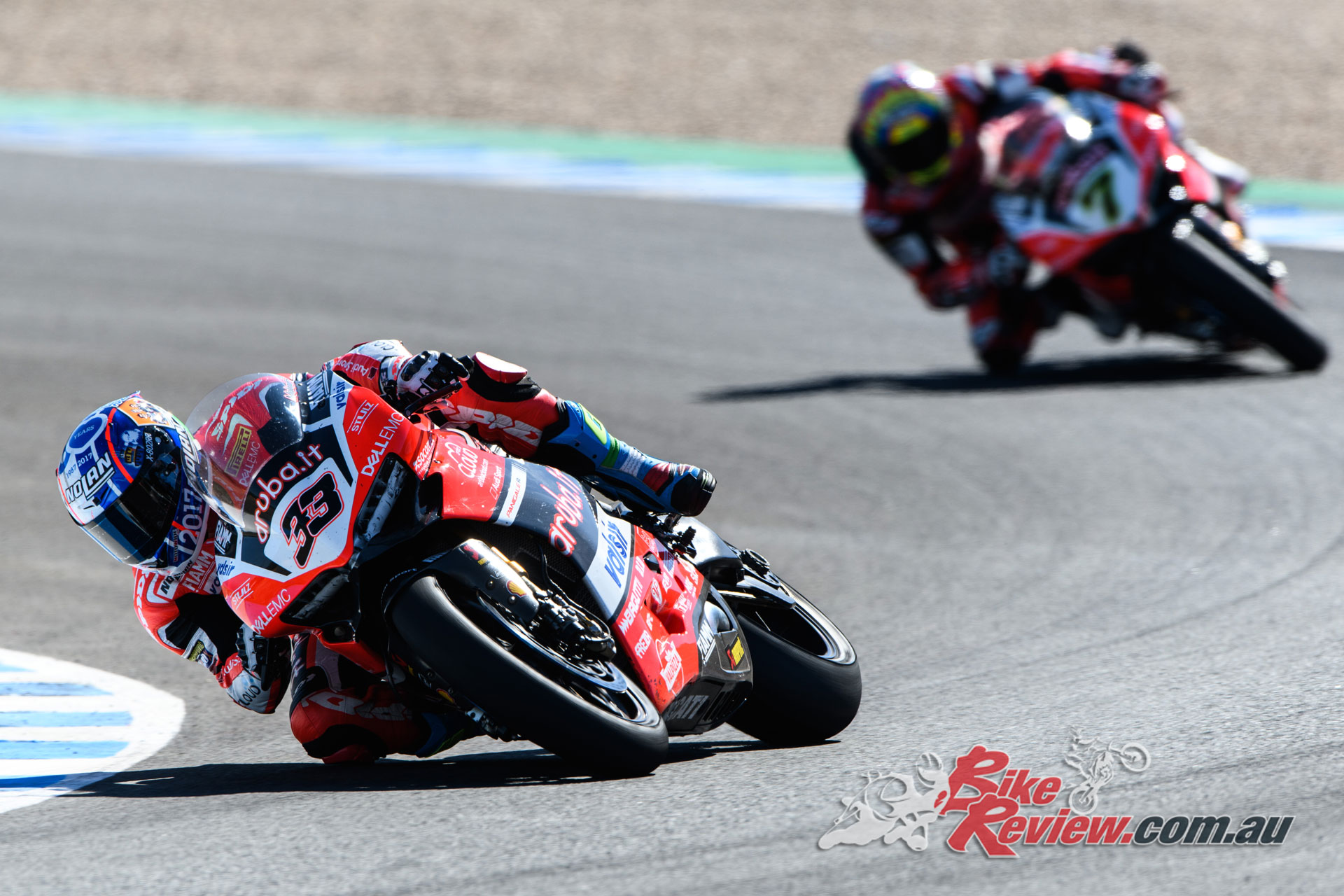 As Melandri chased his second race win in 2017, since his return to WorldSBK at the start of the year, cruel luck saw him pull off towards the end of the race, leaving Rea to take the glory. Sykes produced a solid ride in third place as he continues to recover from wrist and finger injuries sustained in Portugal in September, with Davies crossing the line just under 0.5s ahead of him in second.

It was another strong performance from Alex Lowes (Pata Yamaha Official WorldSBK Team) as he collected more good points on the Yamaha YZF R1, crossing the line fourth, 3.677s ahead of his teammate Michael van der Mark who was fifth.

2014 World Champion Sylvain Guintoli’s return to action on the Kawasaki ZX-10RR saw him finish a creditable sixth, in the first of four races he will ride for the Kawasaki Puccetti Racing at the final two rounds of the season. 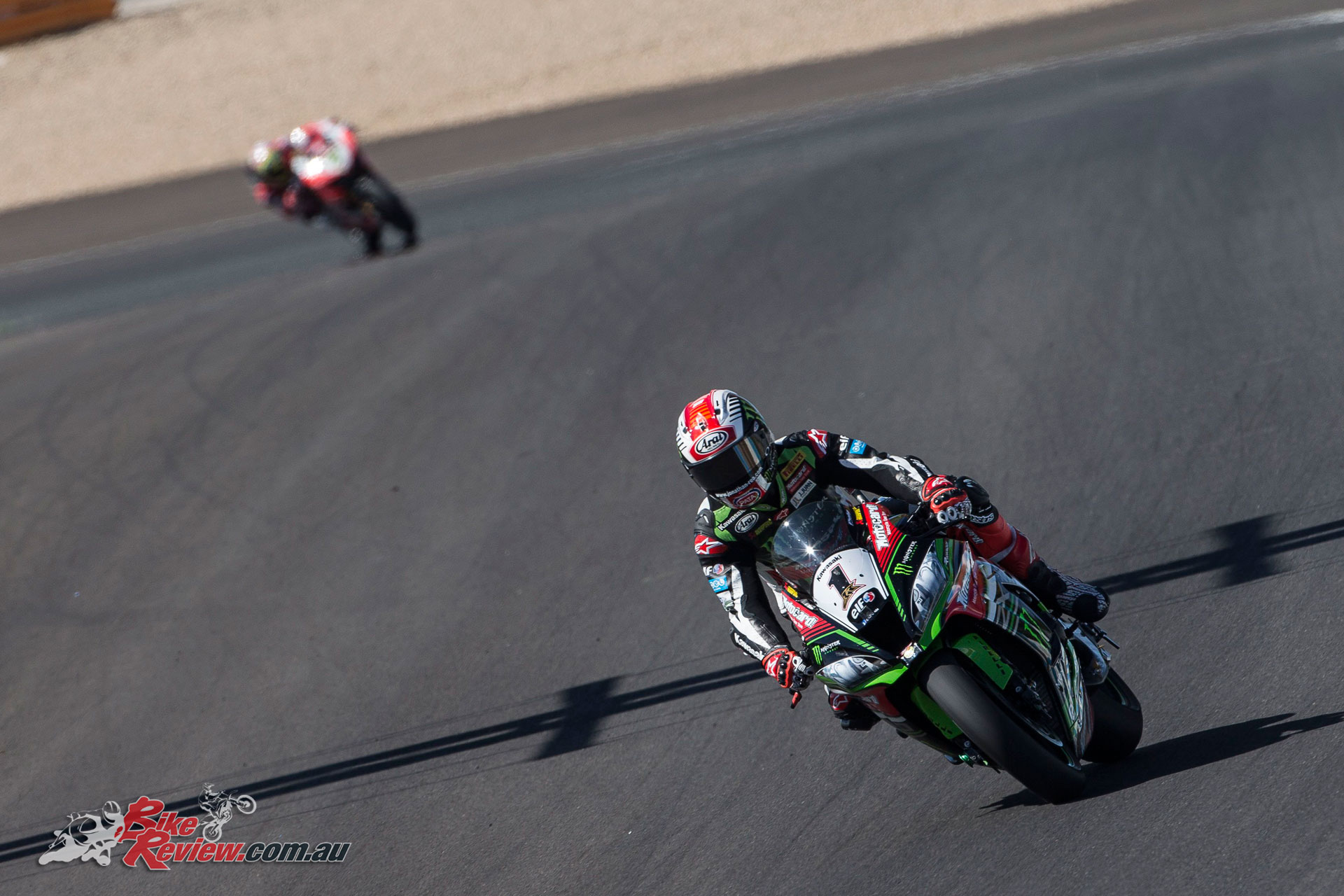 In the initial race start a turn 6 crash on the first lap involving Ayrton Badovini (Grillini Racing Team) and Raffaele de Rosa (Althea BMW Racing Team) brought out the red flags. After a short break the race was recommenced with a quick restart procedure with the riders keeping their focus in the clear conditions in Andalusia on the resurfaced Jerez track, though neither Badovini nor De Rosa made it back onto the grid. 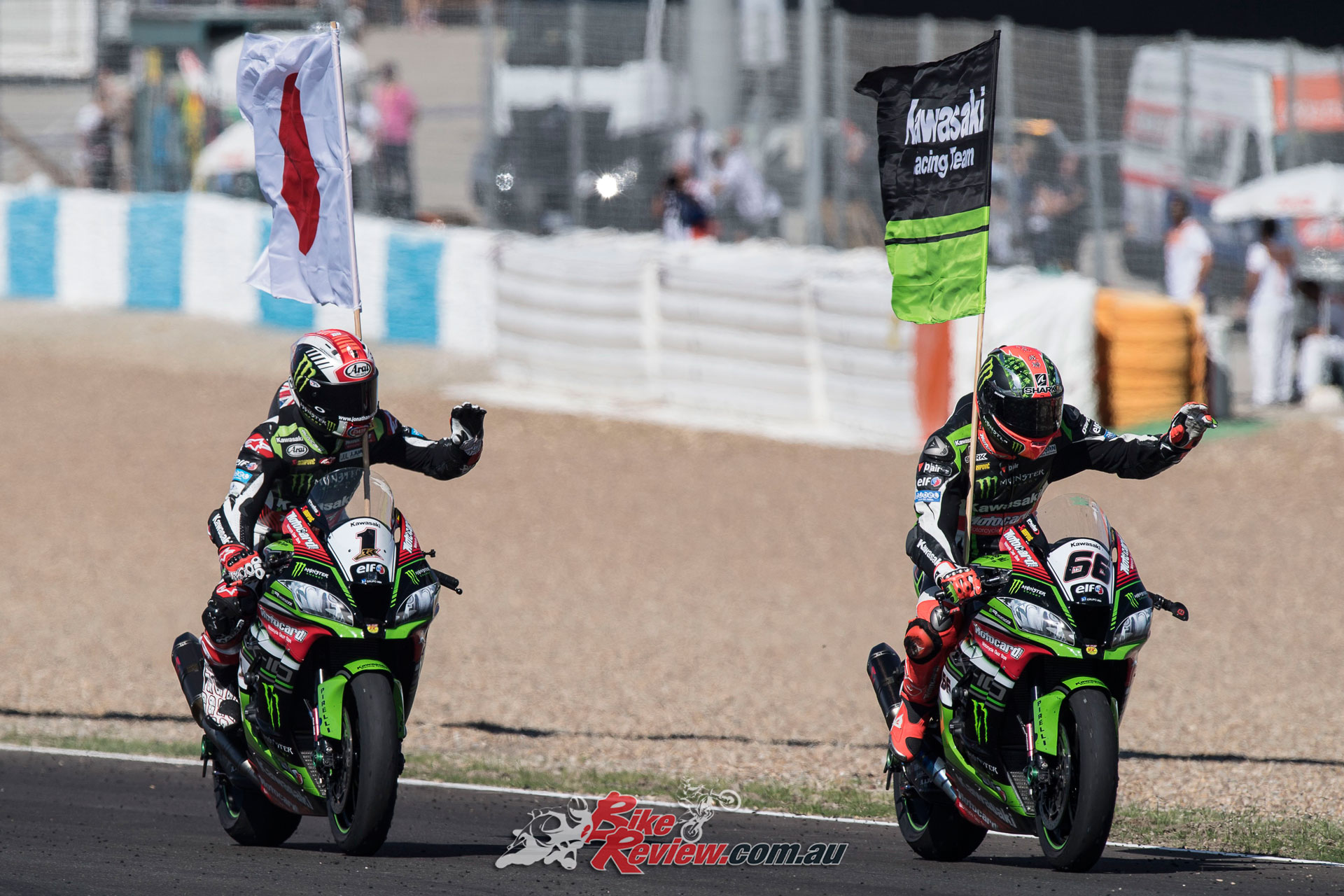 In the penultimate WorldSSP race of the season on Sunday in Spain it was Federico Caricasulo (GRT Yamaha Official WorldSSP Team) who clinched a scintillating victory, crossing the line just 0.065s in front of Jules Cluzel (CIA Landlord Insurance Honda), with the podium completed by Anthony West (Kawasaki Puccetti Racing). 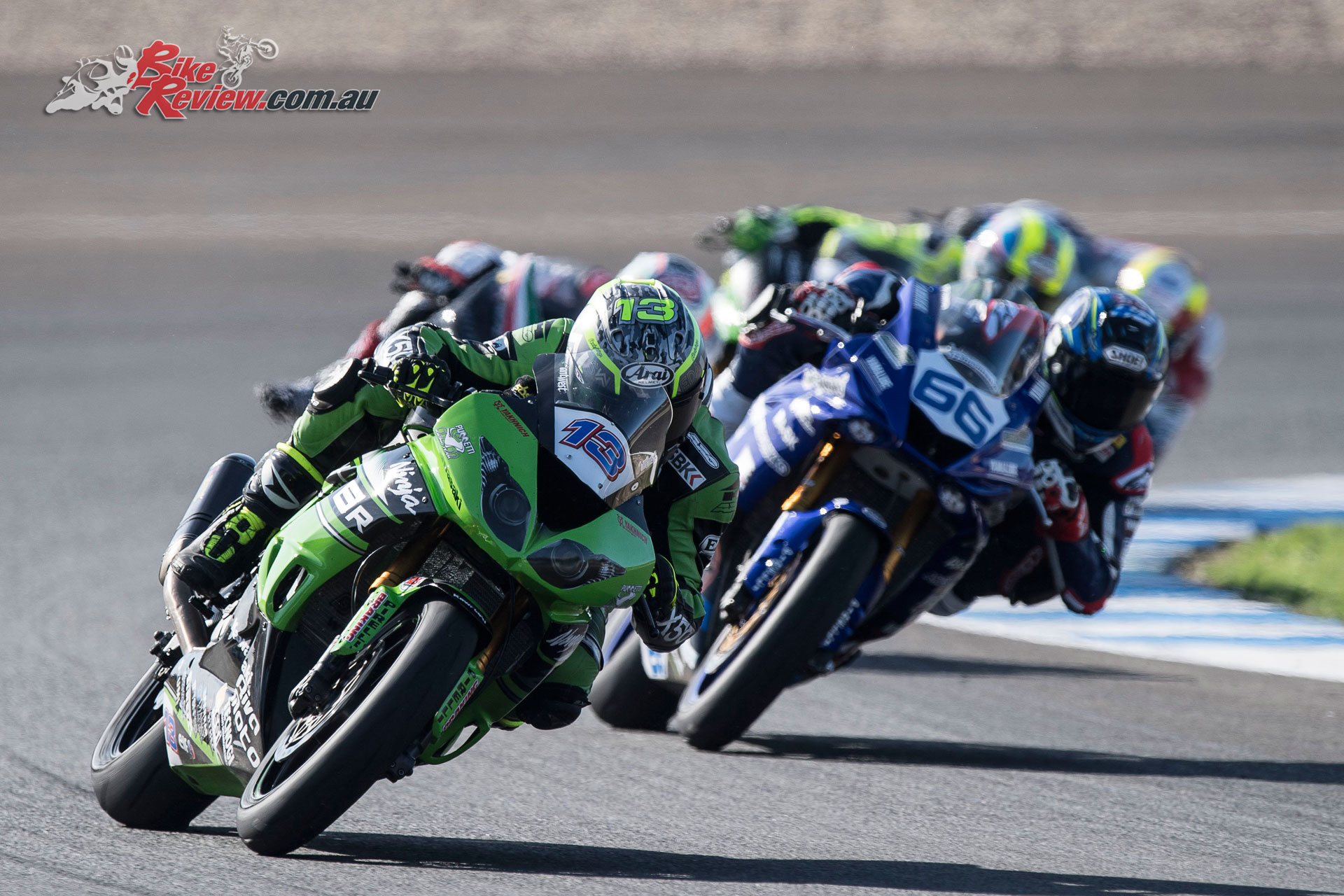 It was a superb 19 lap contest around the resurfaced 4.423km Circuito de Jerez with Caricasulo and Cluzel contesting the lead in the early laps and their battle would continue to the last corner of the race, with the Italian just holding off the Frenchman for a breathtaking win.

The experienced West worked his way up into a front group of five riders and was able to secure third place by a comfortable enough margin from fourth placed PJ Jacobsen (MV Agusta Reparto Corse) in the end.

Anthony West, stated: “My start was not too bad but I got stuck on the inside and everyone was quite aggressive in the beginning. I got dropped back after that and I lost contact with the very front group. I pushed hard to get back up there and ended up in third place with a few laps to go. I felt strong with the bike but it was difficult to catch the two guys in front. This was my first time on this bike so third was a good result for me. I did not want to push too hard and crash. I am happy the team gave me the opportunity to ride and I am happy to give the team back this podium result.” 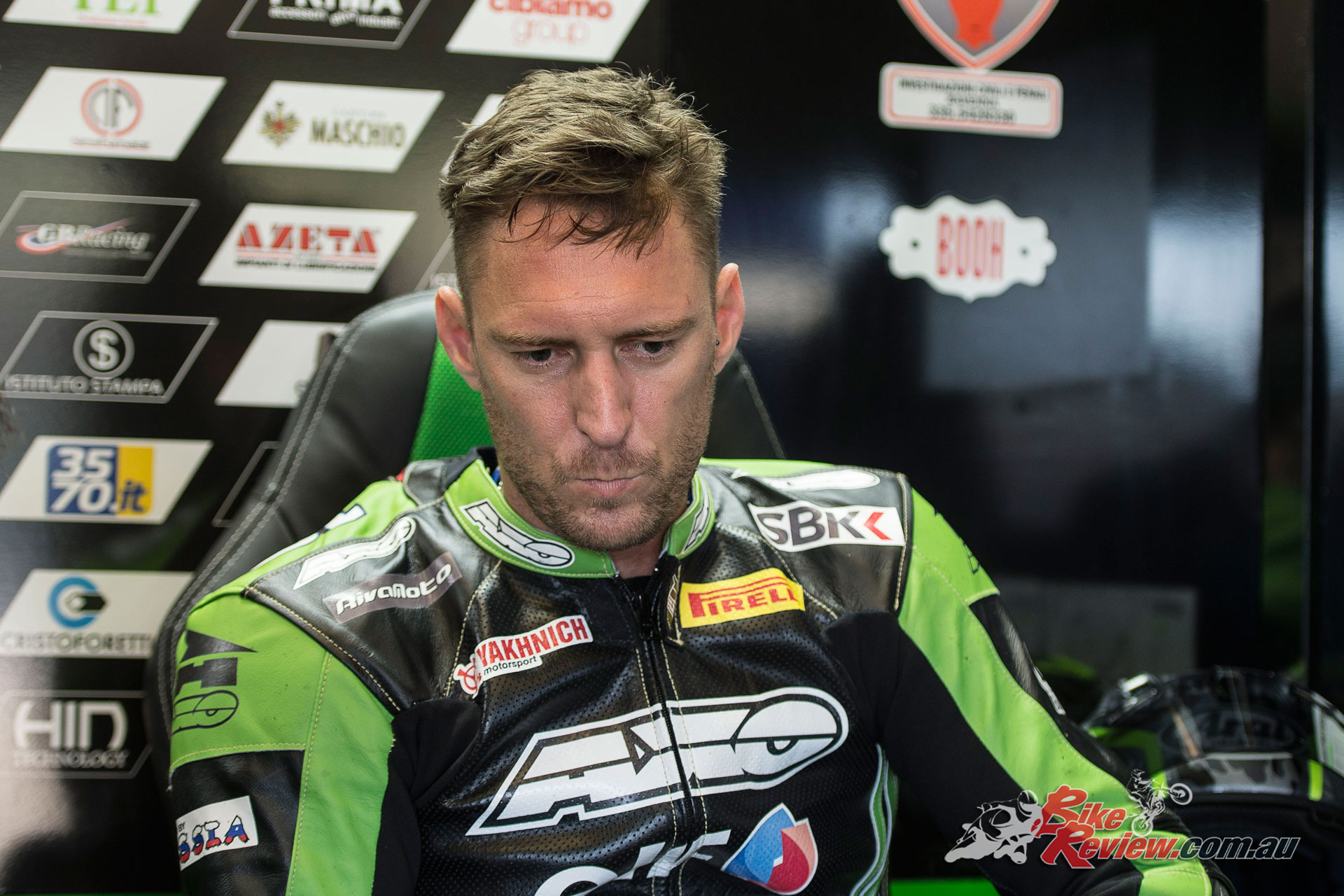 In the absence of the injured 2016 World Champion Kenan Sofuoglu (Kawasaki Puccetti Racing) Mahias has opened up a 20 point advantage at the head of the standings with one race remaining in Qatar early in November.

Sheridan Morais (Kallio Racing) is now out of contention for the title, the South African having a tricky race, taking the holeshot off the line from third on the grid before dropping out of the top ten in the early running and then making his way back up to sixth.

The race results saw Yamaha confirmed as the Winning WorldSSP Manufacturer for 2017 as the GRT Yamaha Official WorldSSP Team secured the Team’s title.

Stefan Hill (Profile Racing) crashed out at turn 10 early in the race, then with 9 laps to go Nacho Calero (Orelac Racing VerdNatura) went down at turn 13 and would retire shortly afterwards. Kyle Smith then also crashed at turn 13 at the end of the race, meaning a DNF for the GEMAR Team Lorini man. 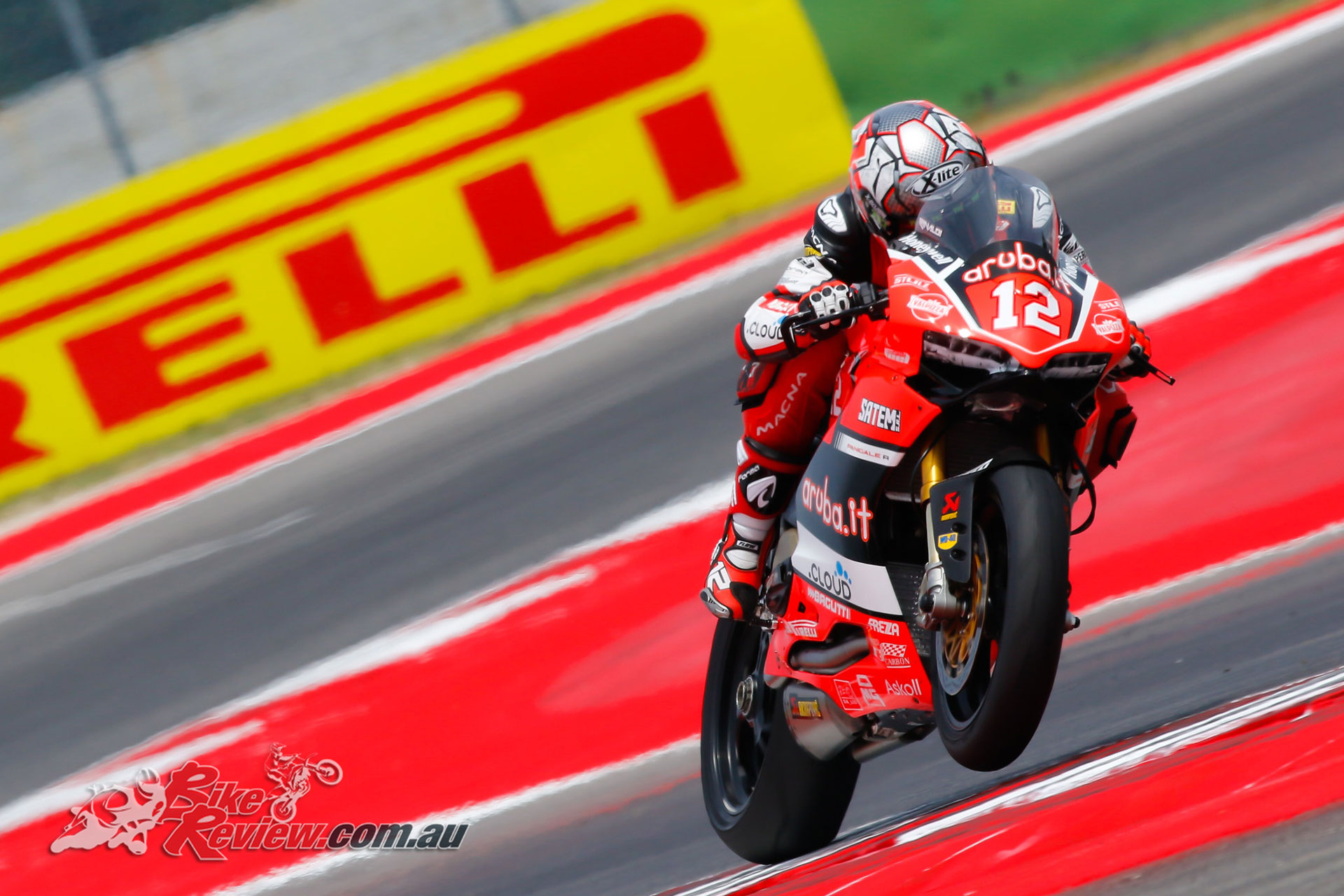 There was drama on the first lap at turn 2 as title contender Florian Marino (Pata Yamaha Official STK1000 Team) crashed with Florian Alt (Team Yamaha MGM), in an incident which also involved Alejandro Medina Mayo (Cardoso School Racing). Medina was given a ride through for his part in that early clash which was to be so costly for Marino’s title aspirations, as the Frenchman ultimately finished in 20th place.

That left Rinaldi and Razgatlioglu to fight out the title between them, with the pair riding together for several laps behind the front runners. There was a big scare for Rinaldi as he was almost hit by Jeremy Guarnoni (Pedercini Racing) with four laps to go.

Guarnoni was penalized for the incident but Rinaldi survived the scare and brought it home in sixth place, which was enough to give him the title, despite Razgatlioglu finishing on the podium behind the rampant Reiterberger and second placed Mykhalchyk. 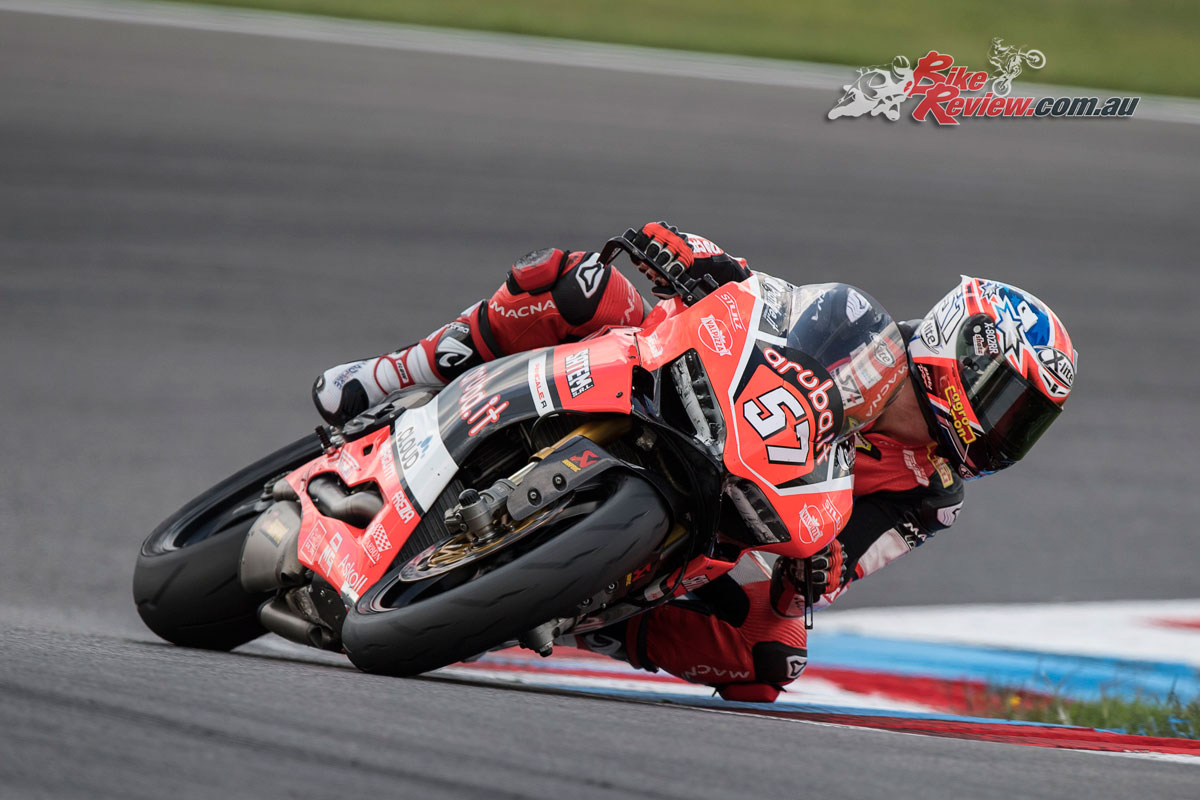 WSSP300: Title battle goes down to the wire as Garcia takes the victory

One event rider Galang Hendra Pratama (Team MOTOXRACING) has made history as he secured his first race victory, as the Indonesian secured the win over the line at the Circuito de Jerez in an 11 lap thriller. Marc Garcia (Halcourier Racing) finished in fourth position, which was enough to be crowned 2017 FIM Supersport 300 World Champion. 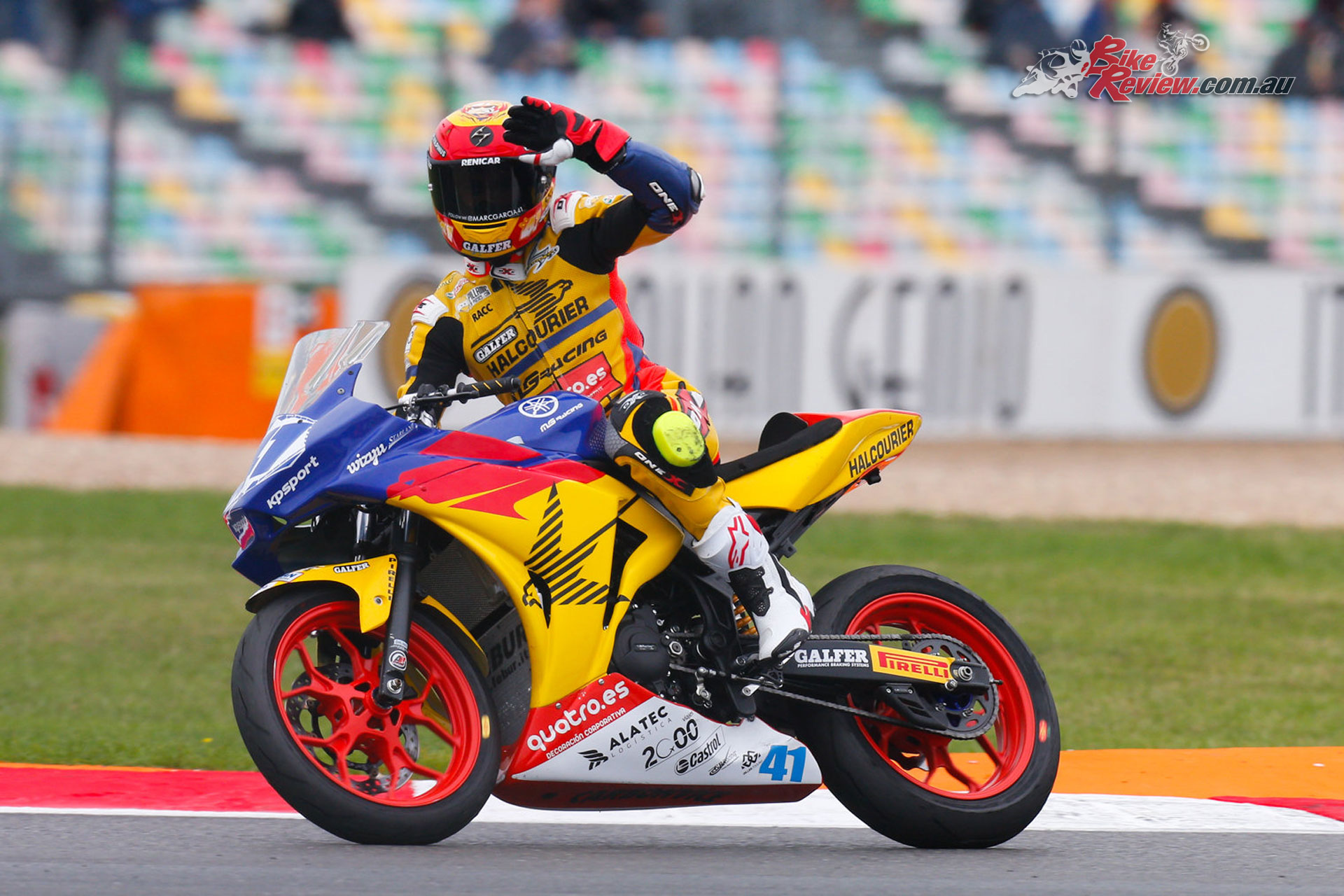 Garcia had a terrible start off the line in one of the most important race starts of his life, whilst Coppola was down in 10thposition on the opening lap, but Spanish rider Garcia was able to bounce back instantly in the opening laps and sit in a championship winning position.

However Coppola was not taking this challenge lying down, and the Italian made up nine places in the first six laps to be back in contention for the title and the victory. In classic WorldSSP300 style there was an eight rider battle for the victory following Ana Carrasco (ETG Racing) being forced to enter pit lane following a jump start.

The final three laps were all about the title fight, and the duo crossed the line joint on points as Scott Deroue (MTM HS Kawasaki) was able to get into the lead on the penultimate lap. But the final lap was anyone’s call and the championship was decided over the line.

As the race to the line was secured by Galang Hendra (Team MOTOXRACING) ahead of former championship contender Deroue, Coppola took third over the line but this wasn’t enough to secure the crown. Garcia took fourth position over the line and as a result took the title by one singular point. 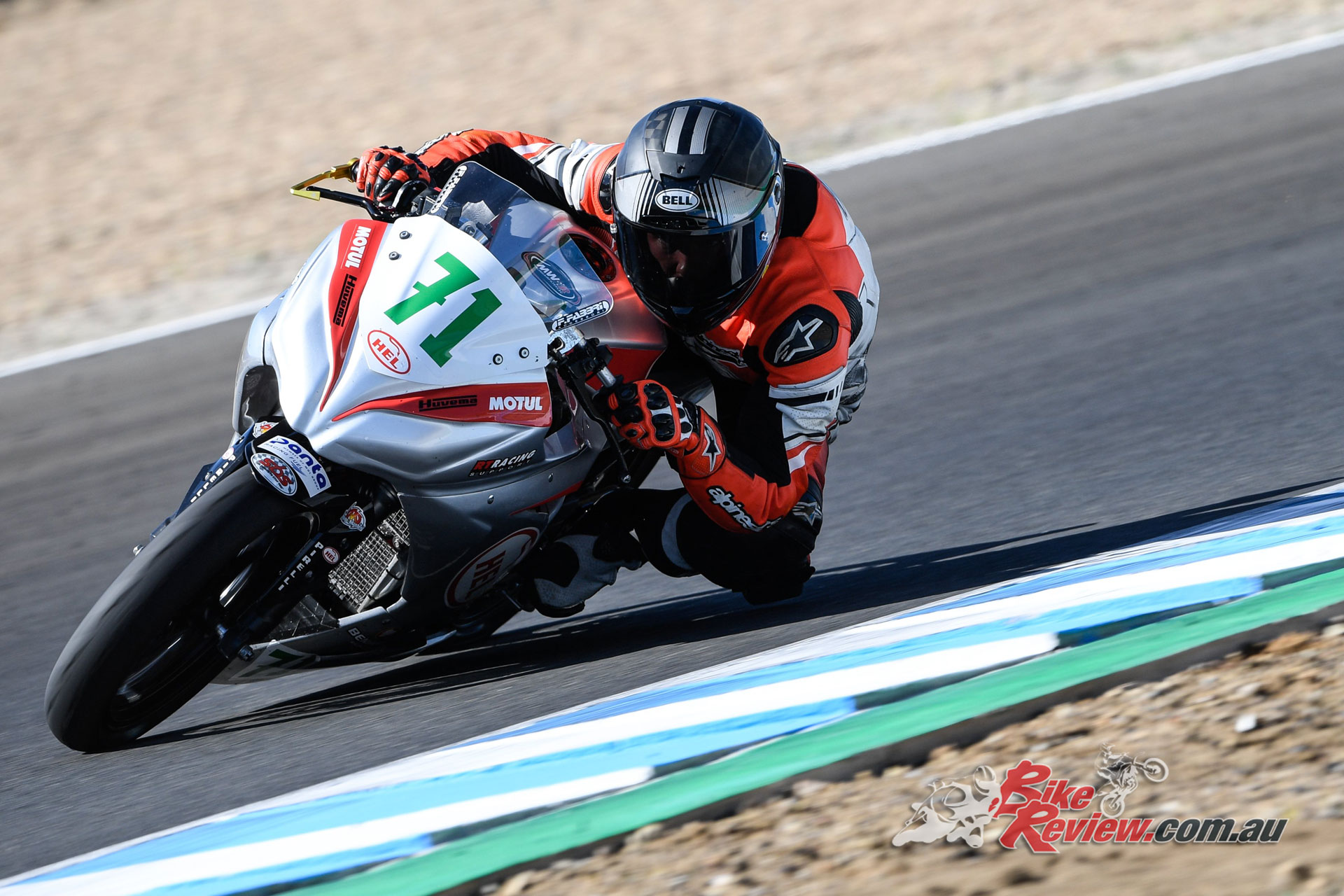 Reid Battye took 25th, saying on social media, “Well after a disappointing qualifying yesterday crashing on lap 3 and not getting a solid time in I had to start from P27. My first world championship race was crazy! Although the position I finished in is not what I wanted at all, it was a great experience. It really stuffed me up starting so far back because it was really hard to go forward when all the other riders are trying to battle with you. I can not thank my Mum and Dad for everything you do for me and I wouldn’t be here today without you. I also can not thank my sponsors and team enough for everything you do also I really would not be racing without you guys. Also all of the fantastic support from back home every message and comment i see means a lot to me and I cant thank all of you enough for supporting me.” 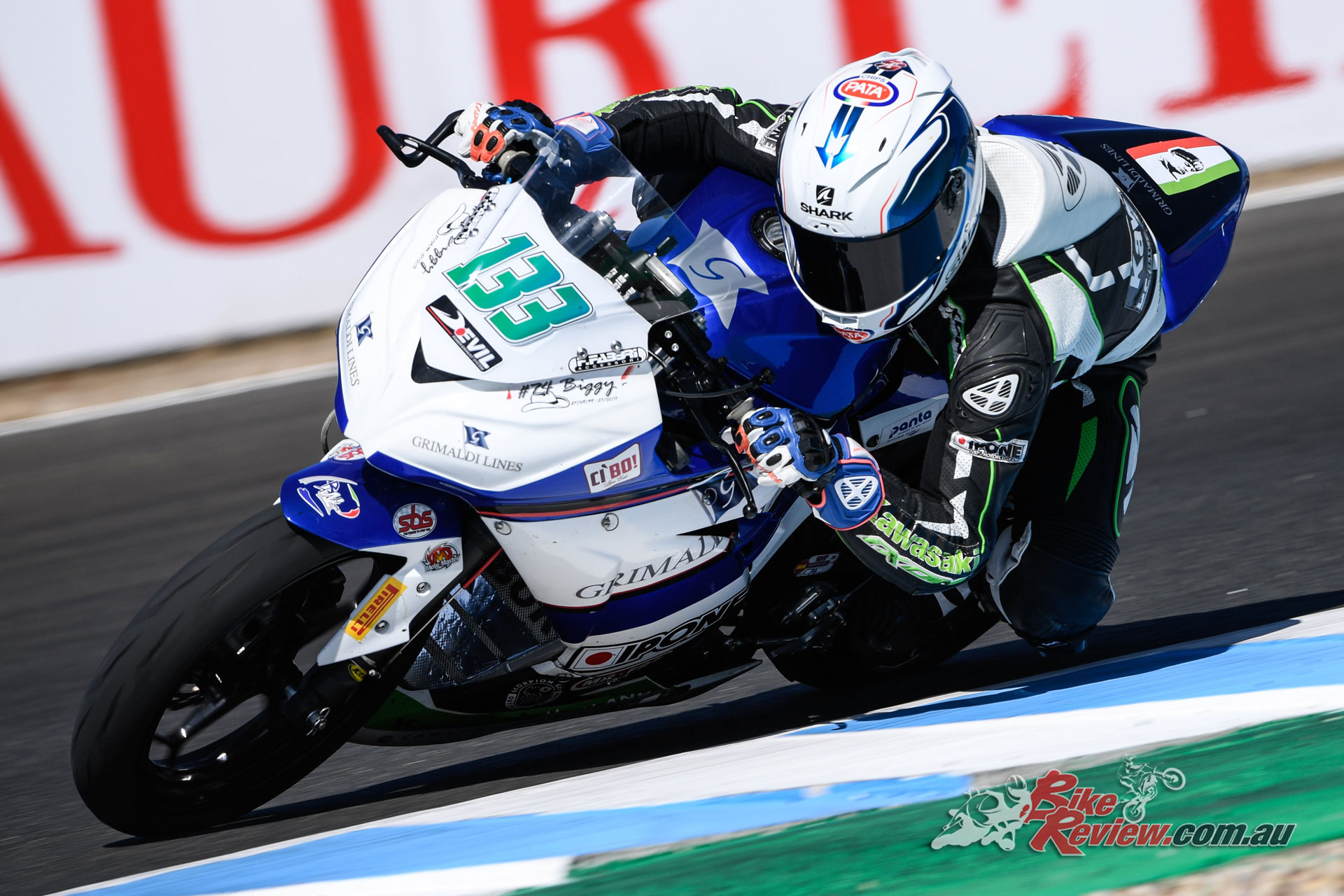