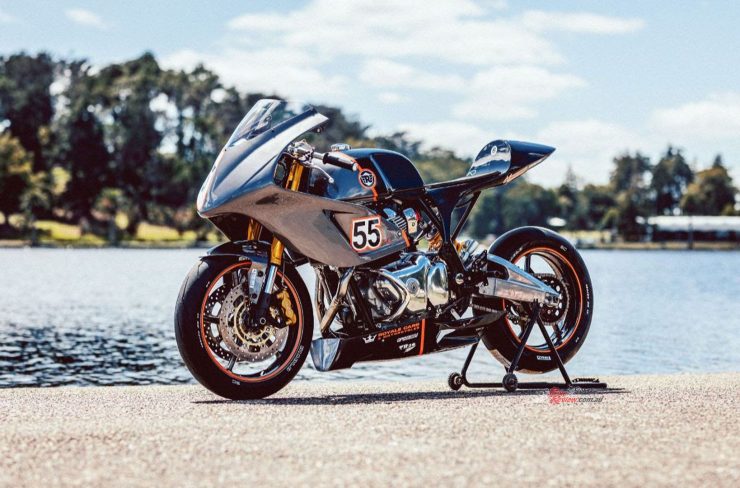 “No. 55” was built by Royale Cars & Motorcycles in Hamilton for the recent Royal Enfield Australia & New Zealand Busted Knuckles Build-Off Competition and entered into the NZ Motorcycle’s bike comp.

Royal Enfield today concluded season two of Busted Knuckles Build Off – one of the most celebrated custom competitions. Royal Enfield dealerships across Australia & New Zealand were asked to transform a custom motorcycle of their choosing, from any of the current models in the range…

Each custom Royal Enfield was assessed in five different categories each worth 20 points, meaning a total possible score of up to 100 points for each judge, and 500 points across the board. Coming in at numero uno was Royale Motorcycles’ No. 55 GT Production Café Racer from Hamilton, NZ! We heard the talented team across the ditch put in over 350 hours into this custom build, and if you look closer at the minute details, you can certainly see why. 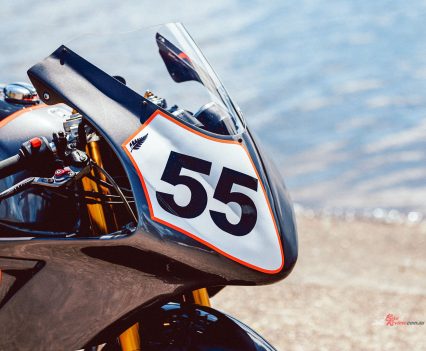 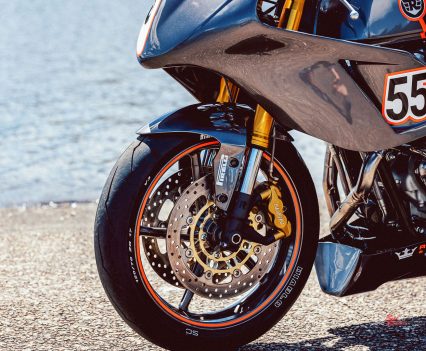 It was a close race to crown the winner of Busted Knuckles Build Off Season 2 ‘Experts Choice’ award this year, and a massive thank you has to be given to the five participating dealerships that put forward five incredible custom Royal Enfield’s:

Experts Choice Award Winner!
Taking inspiration from India’s domestic Royal Enfield ‘GT Cup’ Production Racing series, they decided they’d try something similar, if not a little more like a sports bike. And while you may think that a sport bike is just about as far away from Royal Enfield’s GT as you can get, it’d pay to remember that the original café racers that inspired the GTs were themselves an homage to the Isle of Man TT racers of the ‘50s and ‘60s. 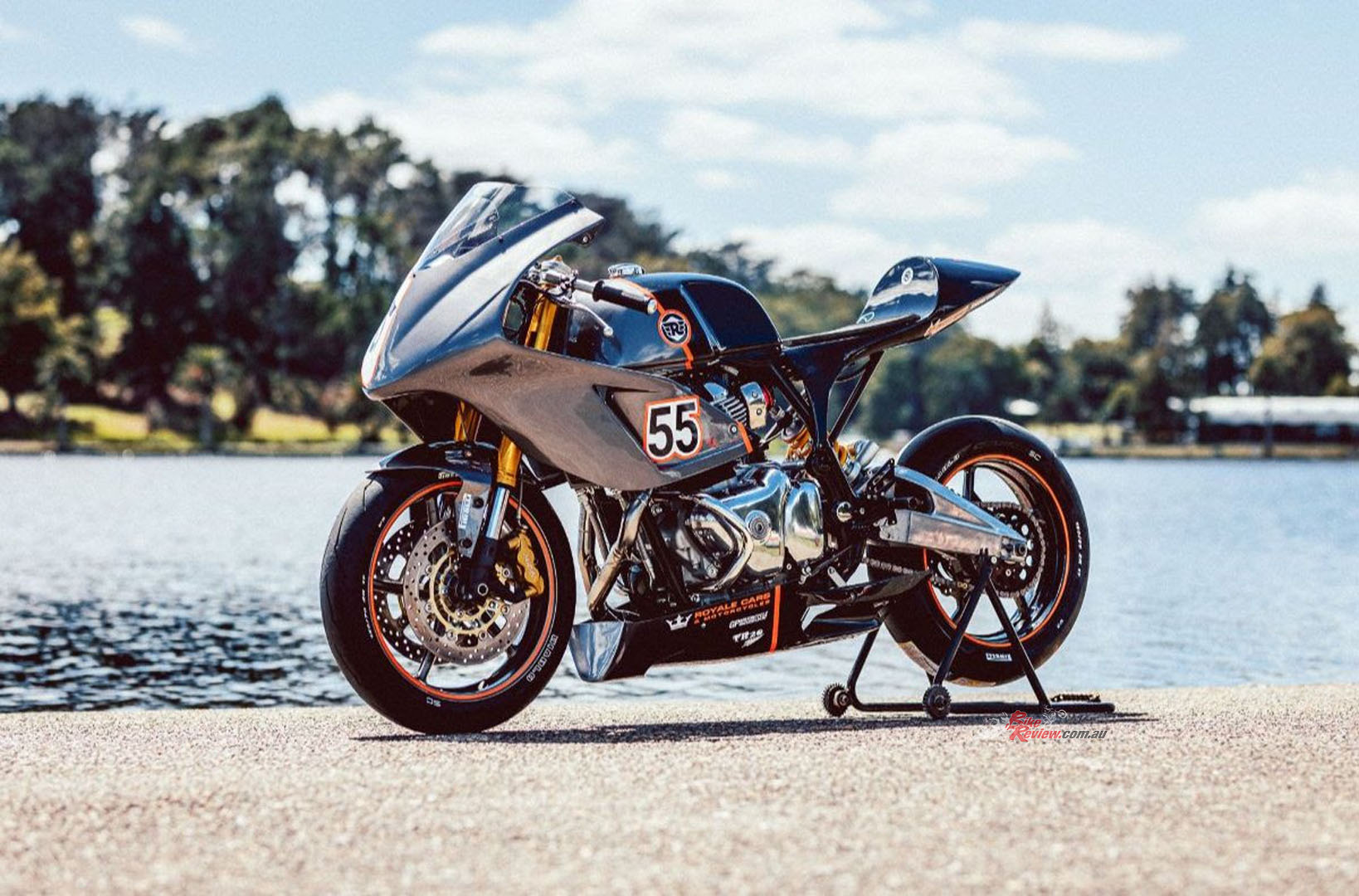 Check out the video above to see more of this amazing build from Royale Motorcycles, Hamilton, NZ…

These were the sports-bikes of their time, so making a modern racer out of the 650 twin was inevitable. The 17-inch wheels have been fitted with Pirelli Diablo racing rubber, including a beefy 120mm boot on the rear. Continuing with the racing theme, the team also constructed a bespoke exhaust system. A super-slick, hydroformed HP Corse end-can for some added racing vibes and no doubt a better engine note as well. This ease of use extends to the bike’s chassis as well; made from steel and not aluminium, it’s much easier for the average custom shop or home builder to modify the GT’s bones. 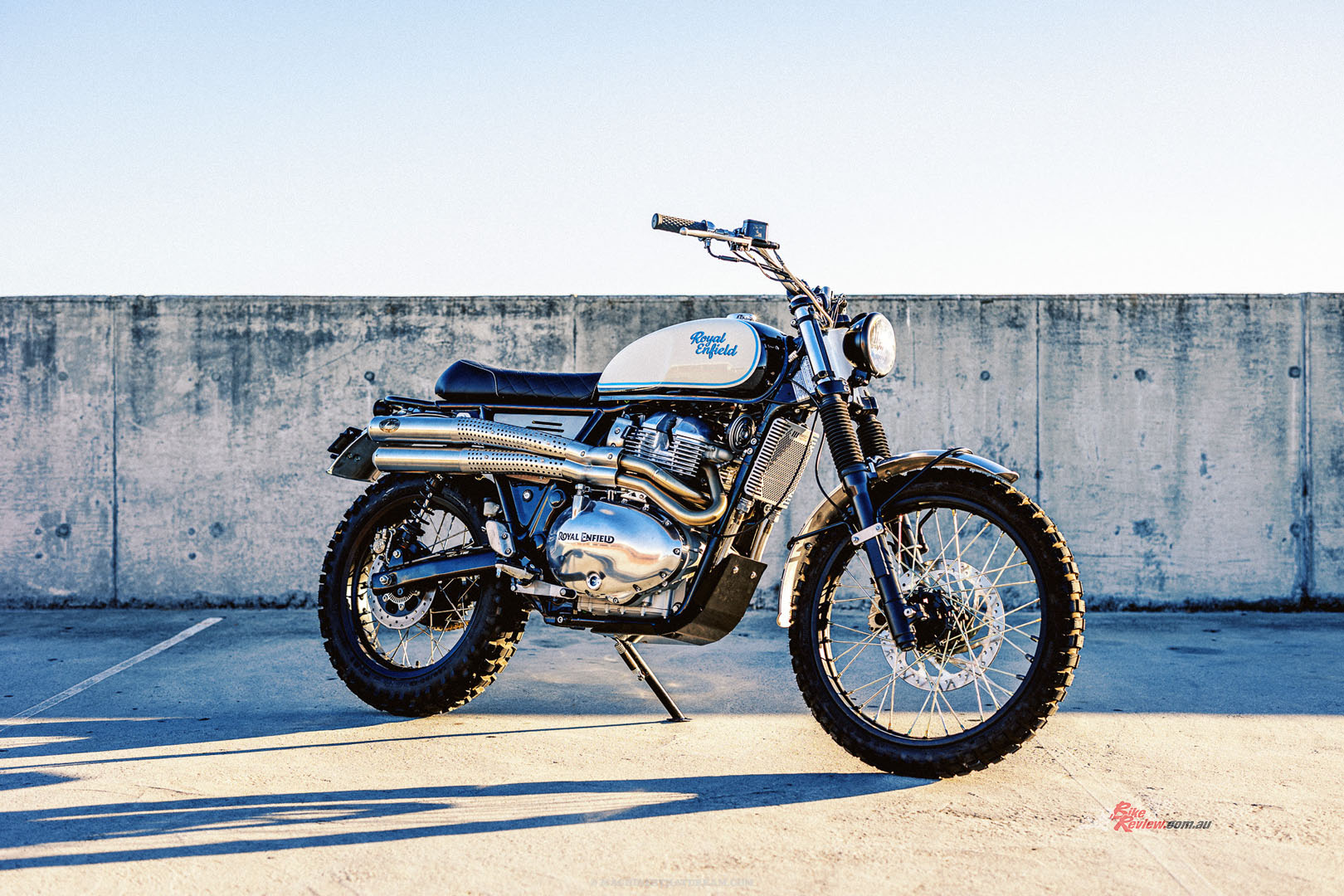 MotoMax Perth – ‘Regency’ Interceptor 650 Twin Scrambler
A Royal Enfield dealer since 2015, business owner Ric Steele says making a scrambler out of the new Interceptor was an obvious choice thanks to the bike’s factory riding position and handlebars; it’s also a motorcycle who’s heritage can be traced all the way back to the California surf and sand culture of the late 1960s thanks to its popularity with the west-coast surfers of the time.

A road-based scrambler -Regency’ Interceptor 650 Twin Scrambler has a bash plate to protect the sump, new indicators, a handmade seat and a super cool bates-style headlight.  A very clean design which can get dirty and is built aptly for all roads and no roads. 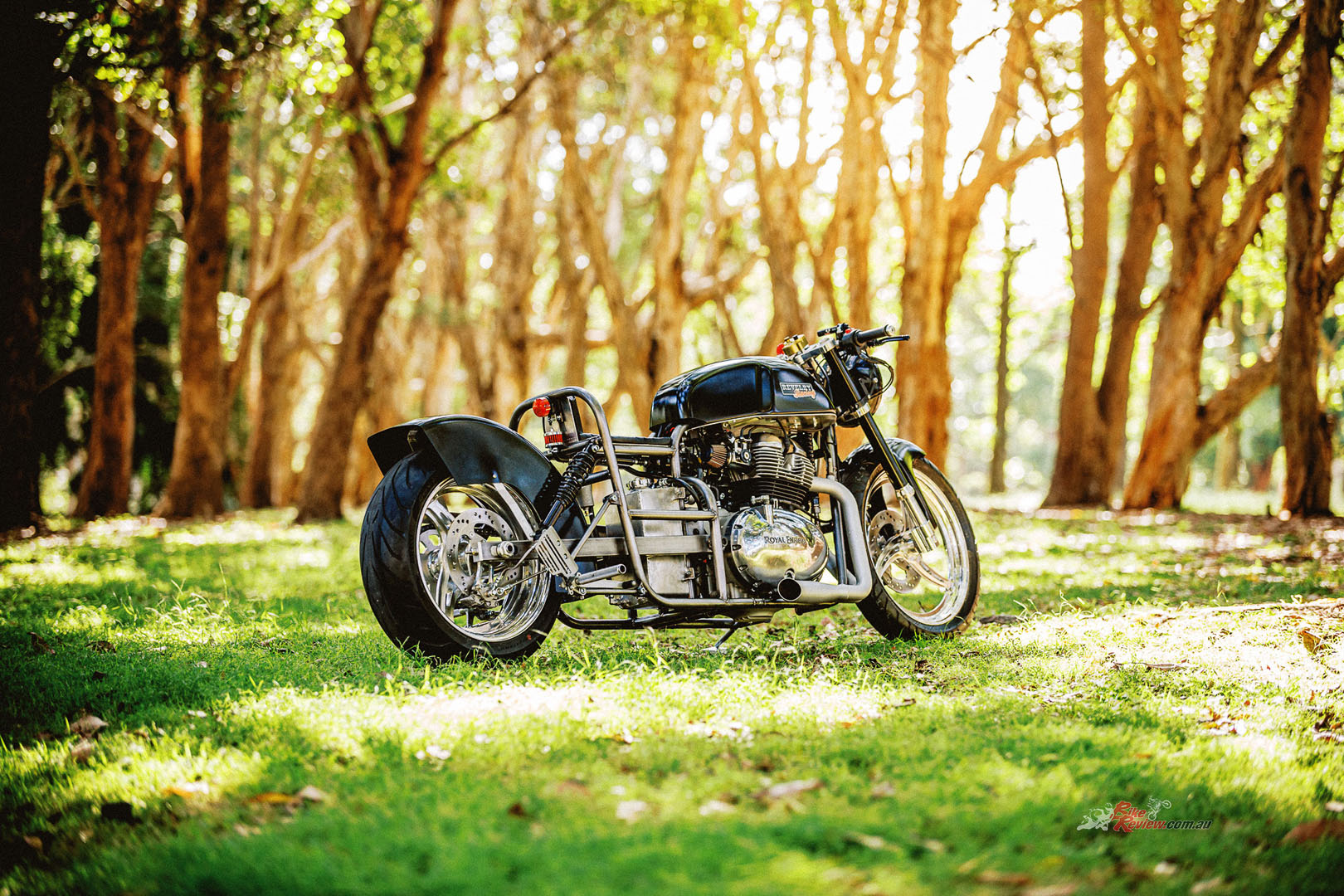 Over the other side of the country, Revelry Cycles Sydney submitted their mental ‘RevElation’ 650 Twin Salt Racer.

The decade-old dealership began selling Royal Enfield’s in 2014. Veterans of the motorcycle industry in their home country of America. The custom build’s frame was built from scratch and once the frame was built, the even tougher job of filling it full of go-fast goodies commenced.

At the heart of the beast would be a Royal Enfield 650 Twin engine, but the engine’s capacity has been increased to 960cc with an S&S big bore kit and a stroker crank. There’s also a throttle body set-up made by Revelry themselves and a pneumatic shifter. And note the free-flowing heads and the very loud custom pipes. 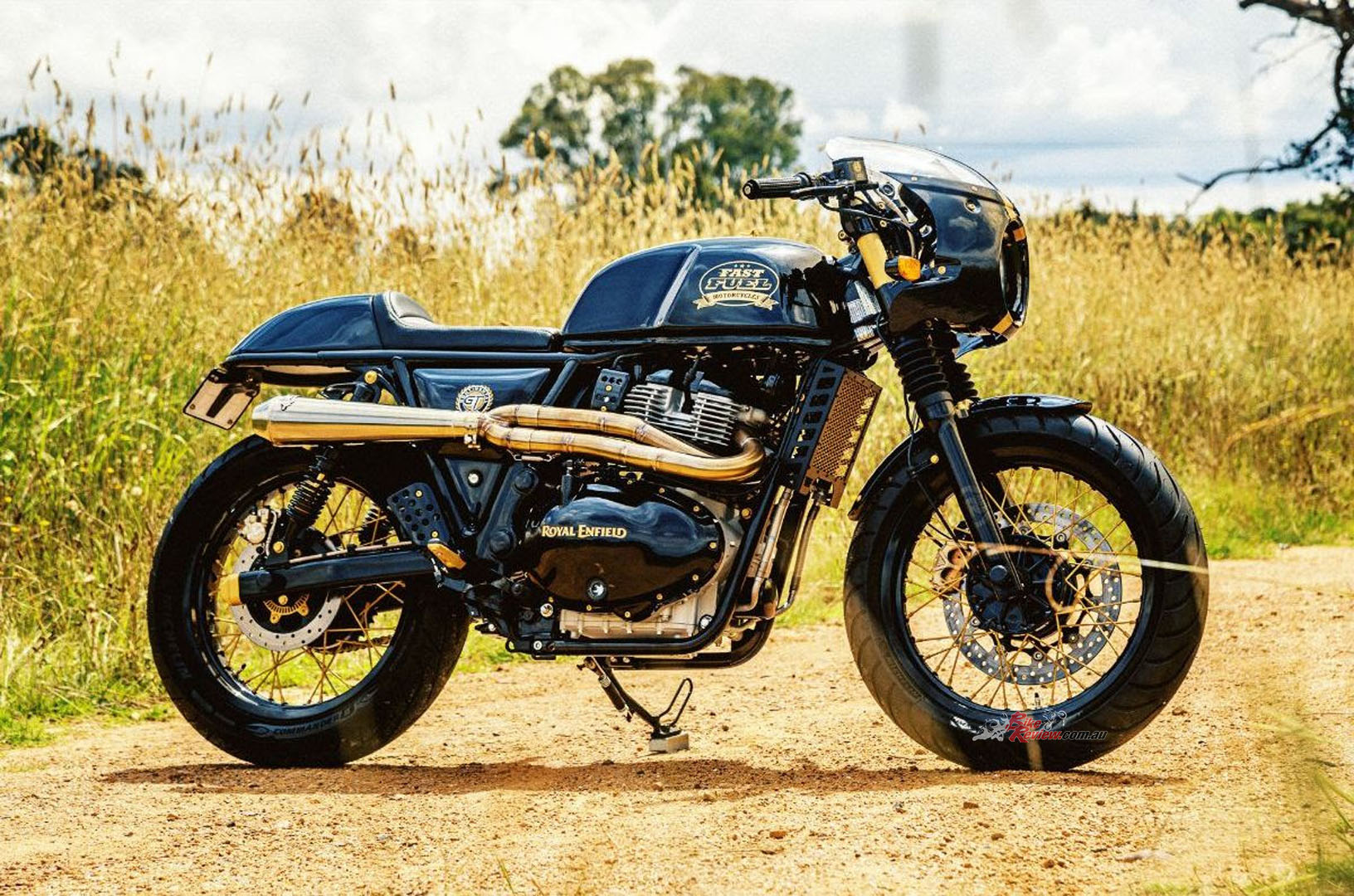 Fast Fuel in Albury submitted their ‘Dr. No’ GT 650 Twin Cafe Racer. Taking on a classic styling and perfecting simplicity.

Meet Lincoln Smart, owner of both Albury’s Fast Fuel Motorcycles and its best ever café racer, this custom and clearly stunning Royal Enfield GT 650 Twin made for the latest instalment of the brand’s Busted Knuckles Bike Build-off. The body kit is from C-Racer in Greece and before it even went on the bike, Linc was at it to make it more closely fit the image of the build he had in his head.

“It had a brake light incorporated into the tail piece, but we really wanted that to be sleek, so we modded the plastic to get that minimal look we were going for.” The exhaust was obtained locally but in an interesting twist for the bike’s overall look, the supplier heard Linc’s drag pipe idea and then turned it on its head by insisting that the racer have something more unique and higher up. Needless to say, they sound fantastic too. 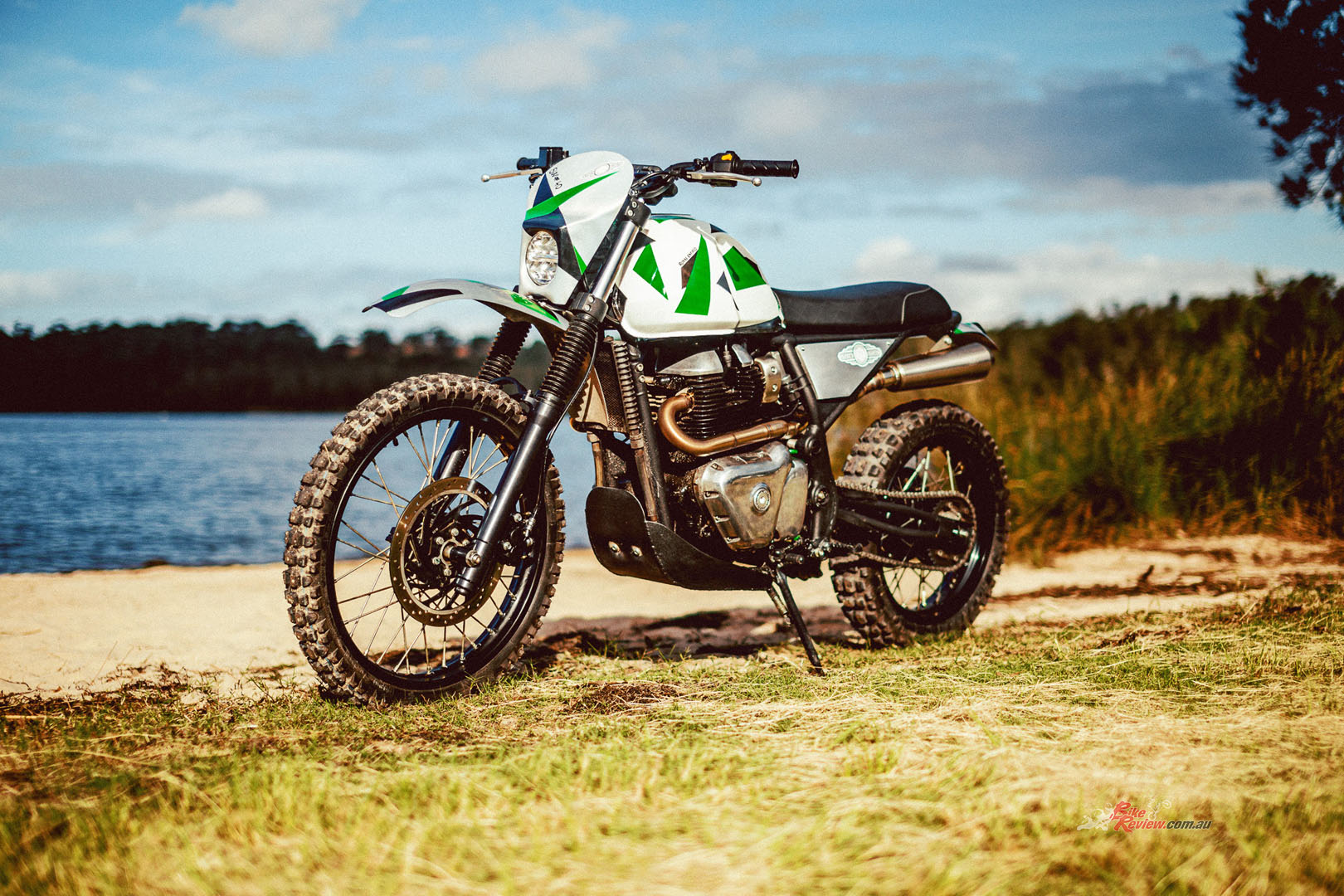 SurfSide Motorcycle Garage, Sydney took what Himalayan fans have been dreaming of and turned it into reality with the ‘No. 40’ Himalayan 650 Twin.

Surfside team put their heads together for Royal Enfield’s 2022 Busted Knuckles Bike Build-off to create a legendary beast; the much speculated on but never seen 650 Twin Himalayan that fans have been excitedly craving since the twin engine hit the market in 2018. “The custom build has a S&S 856cc kit in it and we had Hallam Engineering down in Melbourne work the head for us. Now there’s bigger valves, performance springs and a Hallam camshaft” commented Surfside’s Tommy.

To this they added oversized throttle bodies and a beefy Tassie-made Verex end that can be fitted onto custom-welded two-into-one pipes. The motorcycle weighs 182 kilos on a full tank and a bit over 70 hp. To finish the build, Tommy’s new aluminium bodywork was complemented with Mitas off-road tyres, an extended swingarm and monoshock conversion, and YSS shocks. And note the very cool Garmin Montana 700i dash with SOS button.