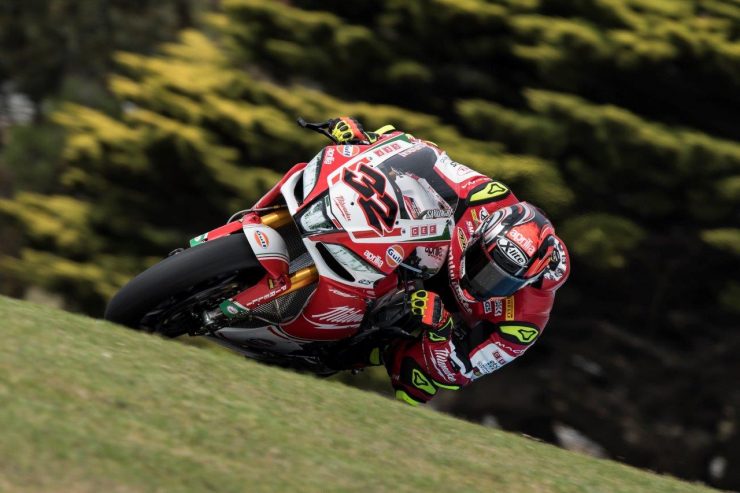 Italian Lorenzo Savadori has turned the WorldSBK form guide on its head by slotting his Aprilia into top spot during practice for round one of the 2018 MOTUL FIM Superbike World Championship at Australia’s Phillip Island Grand Prix Circuit.

The 24-year-old set his fastest lap (1m30.407) in the second of today’s three timed practice sessions in the Yamaha Finance round.  No one was able to best that time in FP3 as the scramble to finish the day inside the top 10 – guaranteeing entry into the all-important Superpole 2 qualifying session tomorrow afternoon – intensified. 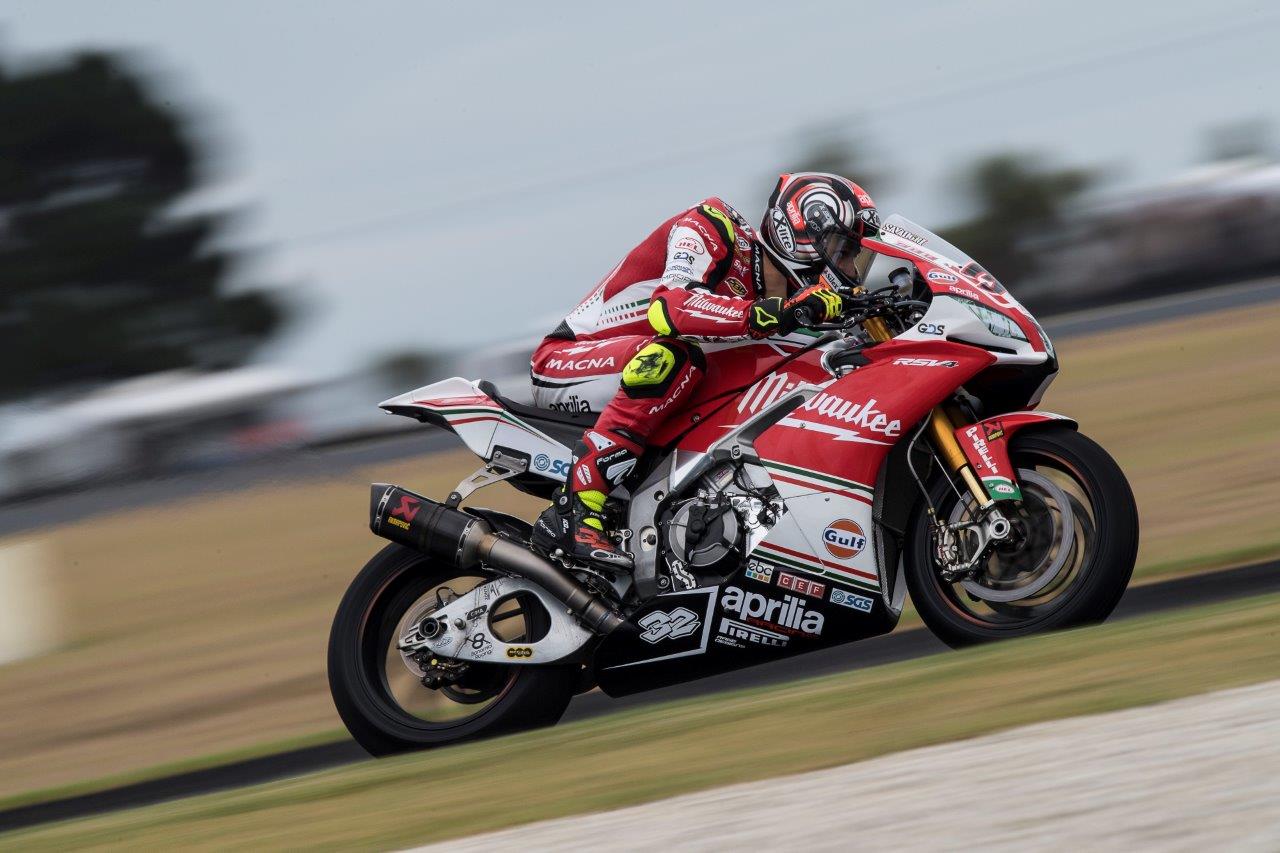 It was a remarkable turnaround in form for Savadori, who could only manage the 10th fastest time in the two-day WorldSBK test at Phillip Island earlier this week.

Laverty was also the fastest down the main chute today, with a top speed of 314km/h on his booming Aprilia V-four. 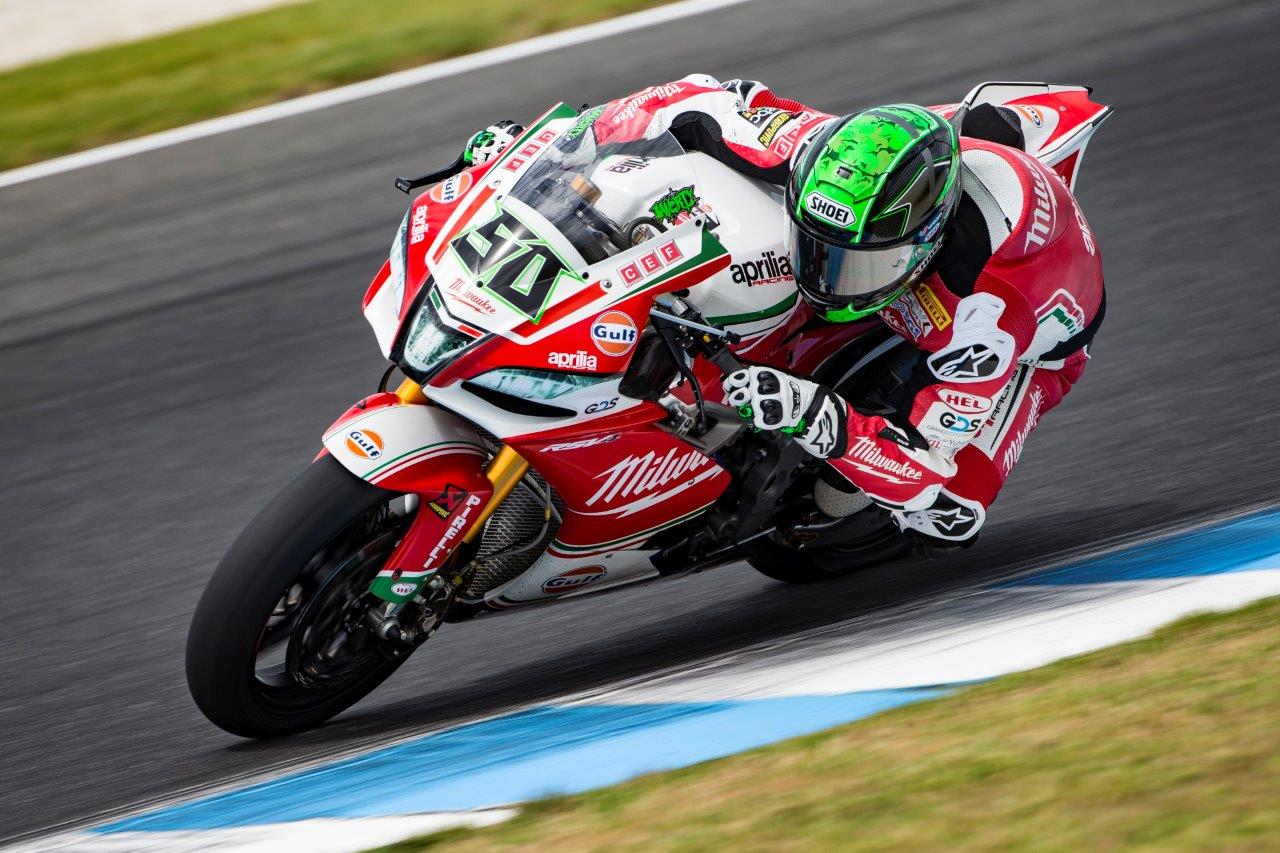 After crashing in FP2, Lowes was the one with the most work ahead of him in FP3, and he just succeeded in sneaking into the top 10 at the expense of American Jake Gagne (Honda, 1:31.689), whose momentum was stalled because of a crash. 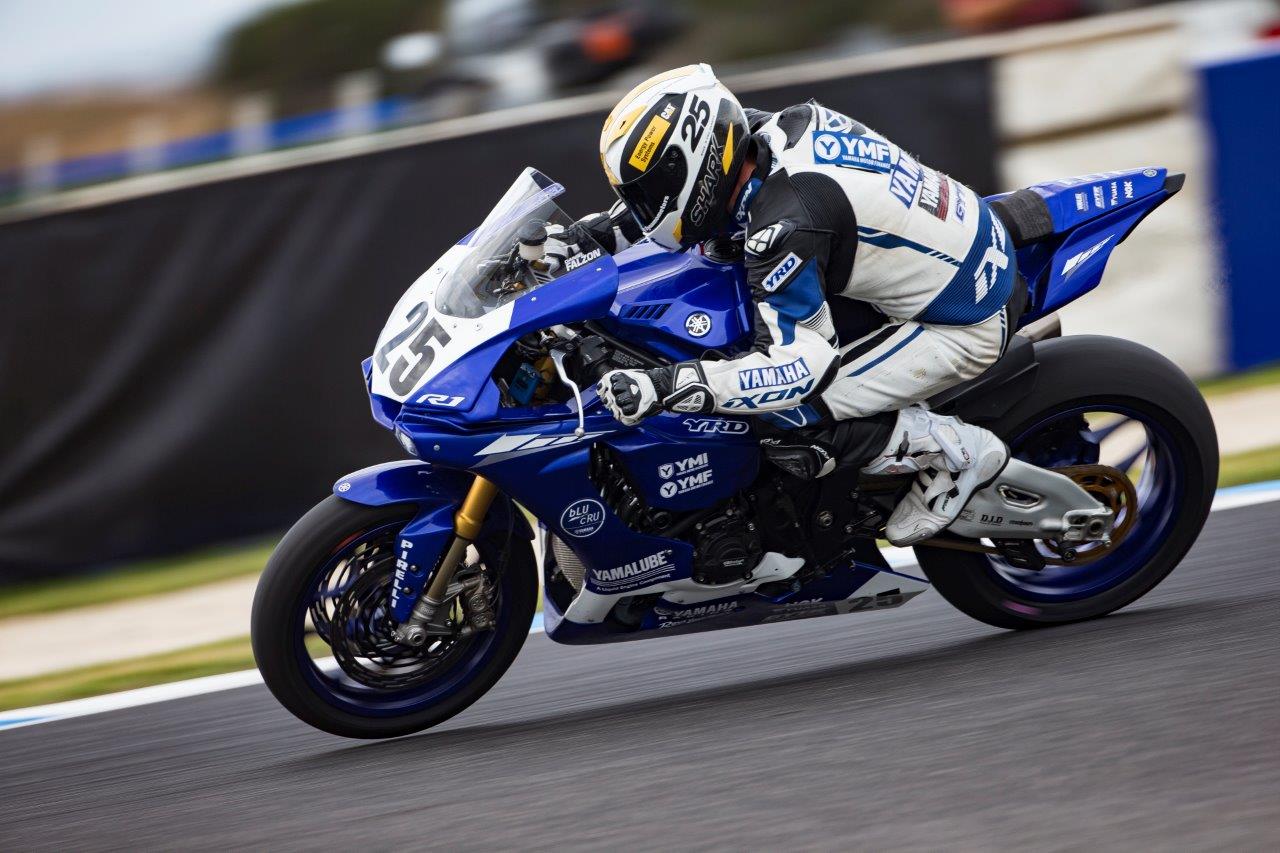 Falzon wrapped up the 120 minutes of WorldSBK day one action in 21st, with the other local wild cards Troy Herfoss (Honda) and Wayne Maxwell (Yamaha) immediately ahead of him.

Attention now turns to FP4 at 9:40am tomorrow, which is an ‘untimed’ session where the riders can finalise their strategies ahead of race one. 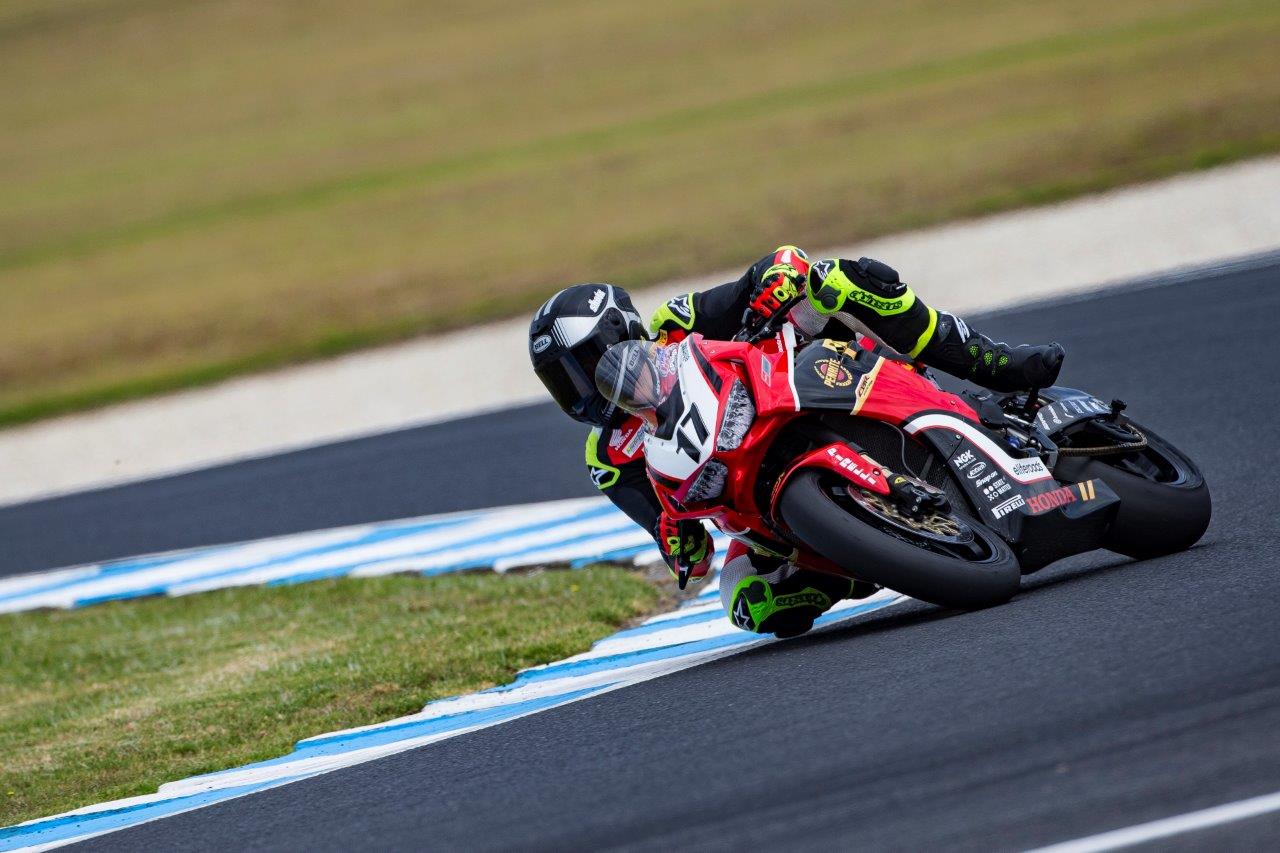 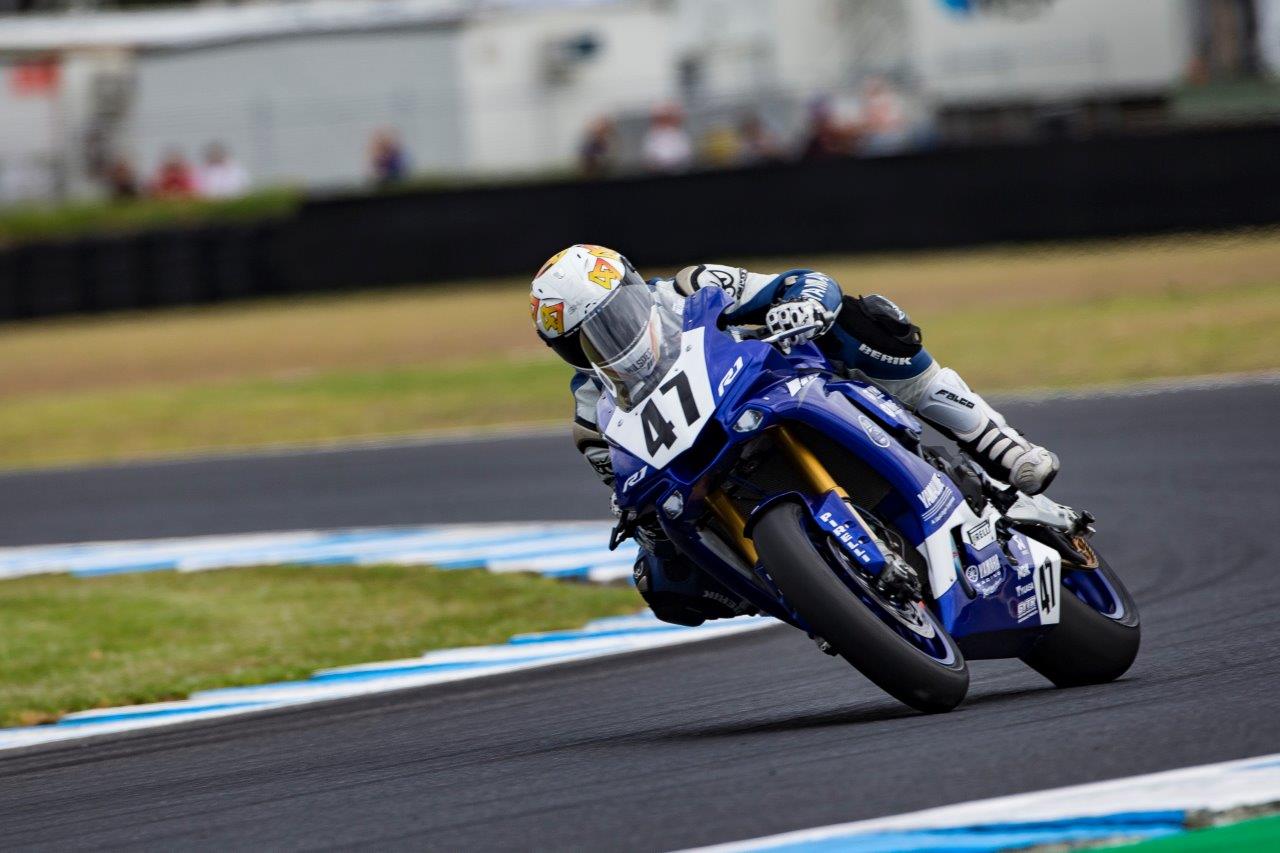 The opening 22-lap WorldSBK race will be held at 3:00pm tomorrow; with the second battle at 3pm Sunday.

World Supersport – West on the money

The Kawasaki-backed Queenslander was seventh overall, just over one second behind the pacesetting Yamaha of world champion Lucas Mahias. 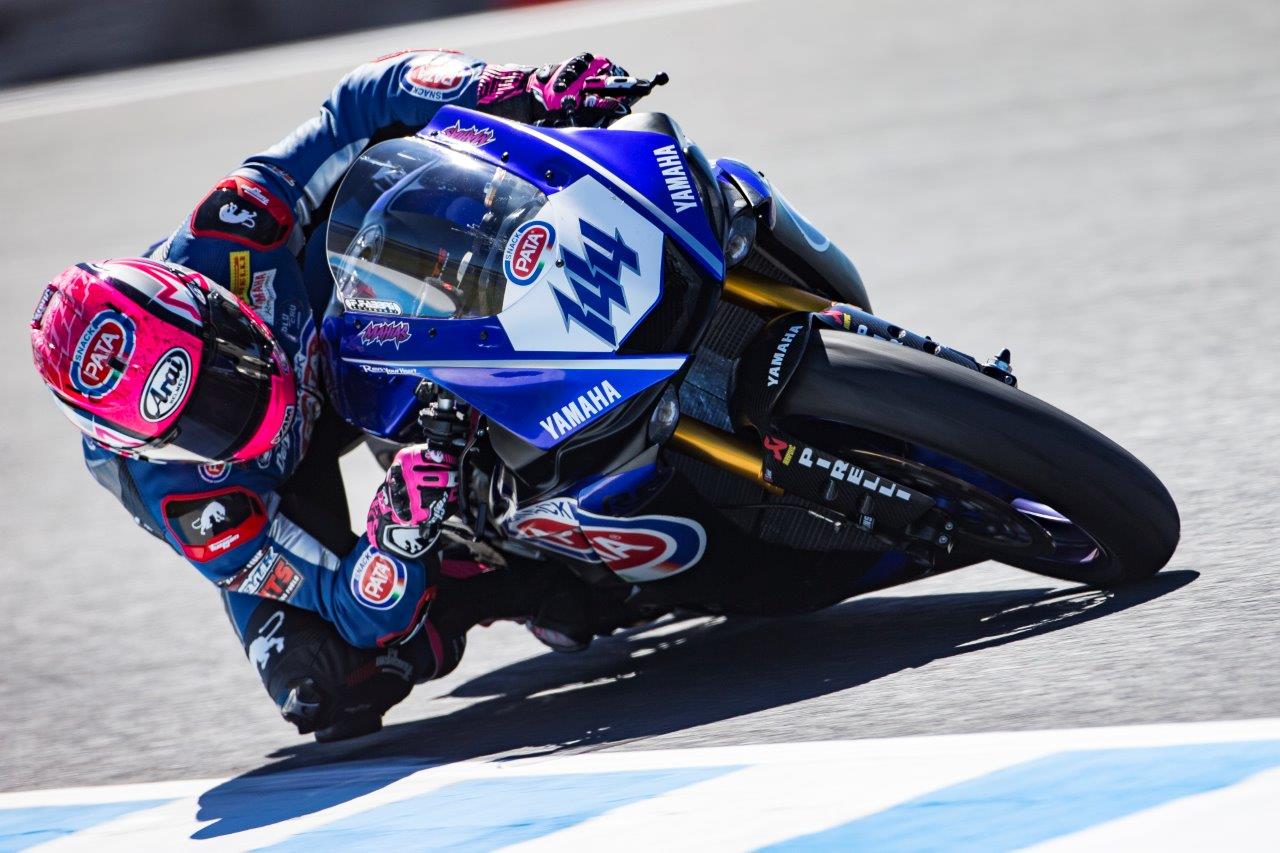 Randy Krummenacher (Yamaha) was second, while German Sandro Cortese (Yamaha), the 2012 Moto3 world champion who has made an 11th hour switch to WorldSSP, was third ahead of Federico Caricasulo (Yamaha) and multiple world champion Kenan Sofuoglu (Kawasaki).

The Superpole battle for final grid positions will commence at 1:30pm tomorrow, ahead of Sunday’s 18-lap race.

HUGE WSBK WEEKEND AHEAD FOR FANS!

The opening round of the 2018 MOTUL FIM Superbike World Championship Yamaha Finance round will feature the 22-lap WorldSBK races on Saturday and Sunday, the 18-lap WorldSSP race on Sunday, and 12 national support races during the weekend across superbike, supersport, supersport 300 and YMF R3 Cup. Aussie WorldSBK icon Troy Bayliss will make his racing comeback in superbike.

A three-day pass for WorldSBK at the island, purchased in advance through Ticketek, is $120* and includes FREE Paddock Access. Add camping at the circuit campground for up to four nights, and you’ve the perfect location for a summer long weekend away with your mates or family.

As always with World Superbikes, kids 15 and under are free^, as is your bike.

Advance ticket sales close Wednesday February 21 at 4:00pm. Buy early and save or get your tickets at the gatefrom 8am Friday, Saturday and Sunday of race weekend (Feb 23-25).