Superbikes from all eras, including a clutch of desirable Brough Superiors, will line up with a more sedate collection of vintage sidecars in the three-day Bonhams Summer Stafford Sale which will present more than 330 machines from tomorrow to 4 July.

The Brough devotee and specialist’s objective was to recreate Noel Pope’s Brough Superior that set the outright motorcycle lap record of 124.51mph at Brooklands 80 years ago, which still stands. Incorporating many original Brough parts, this stunning machine is a formidable re-creation delivering the same power, speed and smell as the original. 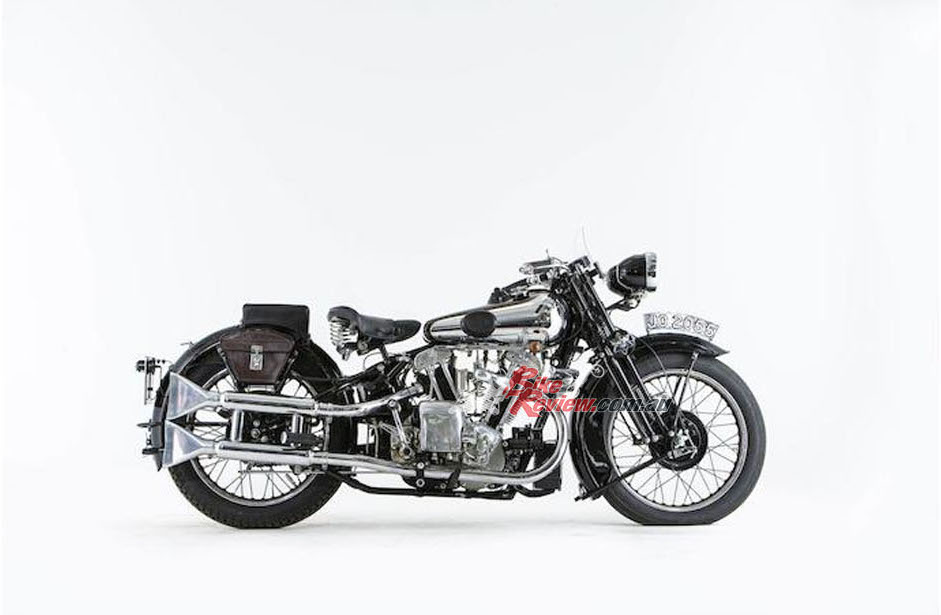 In its slipstream is another desirable example of the early superbikes a 1931 OHV 680 ‘Black Alpine’, estimate $190,000 – 250,000, offered from the National Motorcycle Museum. Dubbed the ‘Miniature SS100’, this ultimate middleweight Brough was restored in the late 1970s/early 1980s and has been owned and displayed by the museum.

However, not all Broughs were destined for Brooklands or other racetracks. Fitted with a Petrol-Tube Sidecar, the third highlight from the British maker, a 1937 1,096cc 11-50, estimate $90,000 – 120,000, was delivered new to the Sheffield Police force. The largest model of the marque was still capable of a top speed of 90mph solo and an impressive 75mph with its sidecar. Living up to its ‘Superior’ name, this combination was the finest of its time, with the sidecar offering comfort with its red leather interior, exterior luggage rack and even mascot.

Ten side cars will also be on offer. With plenty of rare and strange ones from the National Motorcycle Museum.

Along with the Brough, the Stafford Sale will be offering a collection of ten sidecars, tricars and hybrids from the National Motorcycle Museum. Representing the golden age of vintage motorcycling, highlights include an extremely rare 1923 Martinsyde Motorcycle Combination, estimate $35,000 – 45,000, produced by the former aircraft manufacturer, and a 1925 Seal 980cc Family Motorcycle Combination, estimate $25,000 – 30,000. This unusual motorcycle/car hybrid is one of only two known survivors and has its controls, with a car-type steering-wheel, inside the sidecar, which can carry two adults and two small children.

Bonhams Motorcycle Sales are always fertile ground for presenting long-hidden ‘barn finds’ and never-completed projects. The Summer Stafford Sale continues this tradition, being peppered with fresh to market machines that have not seen the light of day in years or even decades.

The dozen machines offered from the collection of the late engineer David Taylor include a project 1928 Norton 490cc CS1, estimate $5,000 – 8,000, believed to have been ridden by the legendary Douglas Lamb at the Isle of Man TT races in 1928 and 1929.

A rather shinier motorcycle, with a touch of stardust, is the 1973 Norton Commando 850 Roadster offered by the family of the late Keith Emerson, estimate $10,000 – 14,000. This was the second Commando for keyboard maestro and founder member of the 1970s ‘prog rock’ group Emerson, Lake and Palmer, who bought it to replace his first, he used to commute from his Sussex home to a London recording studio, which had been stolen.

The sale will be a traditional live auction, welcoming bidders back into the saleroom, in addition to being streamed and available via Bonhams.com and on the Bonhams App, providing registered bidders the opportunity to bid in real time online. Absentee and telephone bids are also encouraged.