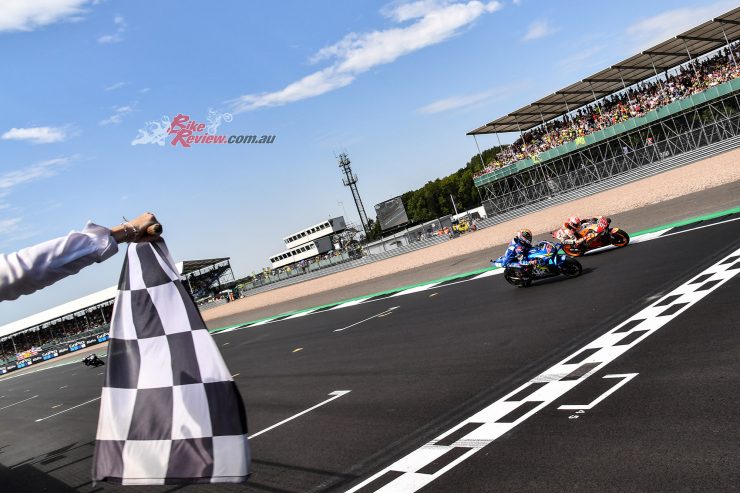 Wild Silverstone, Rins beats Marquez on the line, Dovi out!

Alex Rins (Team Suzuki Ecstar) became the sixth different winner at Silverstone in the last six races at the track in a stunning GoPro British Grand Prix, timing it to perfection to sweep past reigning Champion Marc Marquez at the final corner and make it two last-second defeats for the number 93 in as many races. 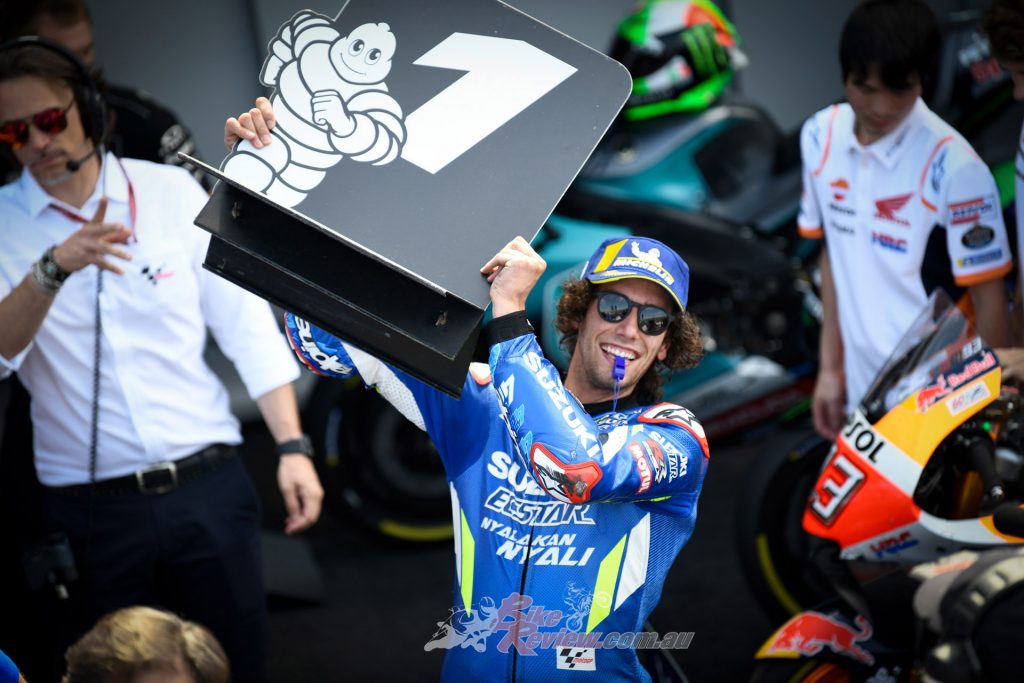 A duel from almost the first to last lao, the Silverstone race is the equal fourth closest premier class finish – and one very much written straight into the history books. Maverick Viñales (Monster Energy Yamaha MotoGP) completed the podium and closed in in the latter stages, but the battle remained Marquez vs Rins to the line.

Marquez got a storming start from pole, streaking away from the line as Valentino Rossi (Monster Energy Yamaha MotoGP) slotted into second but some huge drama hit just behind. A crash for Fabio Quartararo (Petronas Yamaha SRT) saw the rookie slide out and unfortunately for the man behind him, Andrea Dovizioso (Ducati Team), the stricken bike was unavoidable. The Italian hit the Yamaha and both machines and men slid out into the run off, out of the British GP at SIlverstone. 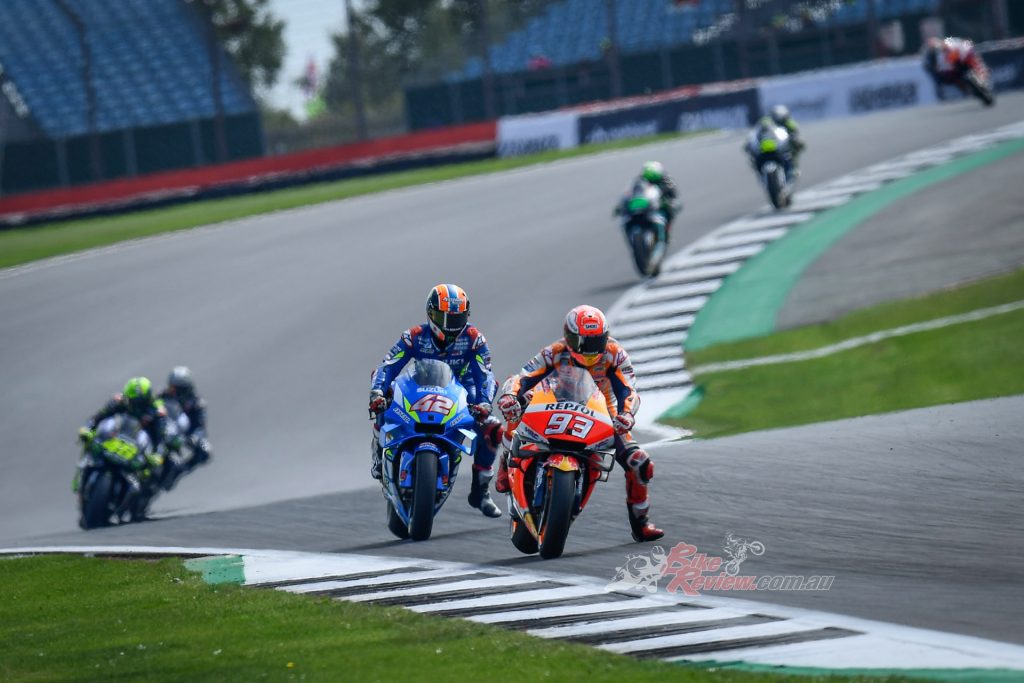 That left Marquez, Rossi and Rins at the head of the race, and the number 42 wasted no time attacking the ‘Doctor’ for second, tagging right on to the rear of Marquez as soon as he was past. From there the two began to pull away, and Rossi was left with teammate Viñales to contend with as the number 12 plowed past Franco Morbidelli (Petronas Yamaha SRT) and started to cut down the gap.

Then Rins ran wide and Viñales did just behind, leaving both men with a little more work to do. Heads back down though, they both set about getting back into the tow of the machines ahead. Rins got back on terms with Marquez, and with 14 to go Viñales was pulling alongside Rossi. Move made and cleanly past, the gap to the two ahead was now the key focus for ‘Top Gun’. 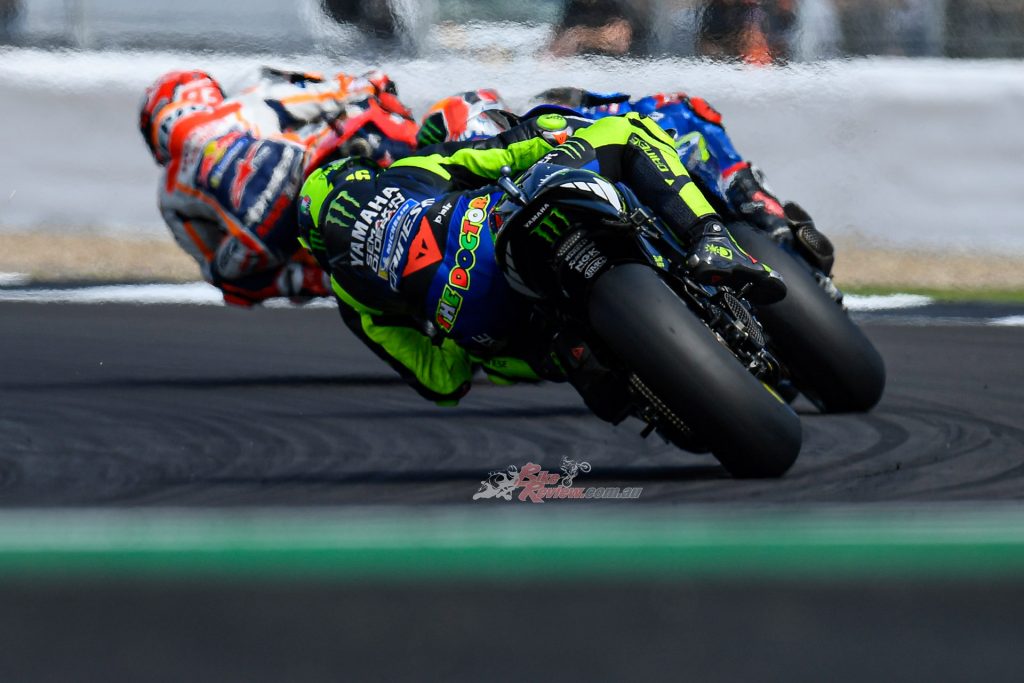 Not long after, Rins attacked. Around the outside, the Suzuki rider swept past in a stunning move for the lead, and breath was held around the track. Was this a deciding moment? Ultimately it didn’t last long, however, and Rins even specified: “I let him back past, I didn’t want him to see my weaknesses.”

And so it came down to a duel to the end, and what a duel it was. The two remained tagged together as the laps ticked down and everything was set up to perfection for a final lap showdown, although the Suzuki rider had a wobble at Turn 9 after a look behind to check on the approaching Viñales. Regrouping quickly, Rins then took another nibble on the penultimate lap, getting past Marquez for just about a corner before the reigning Champion struck back…and then came a dress rehearsal of sorts. 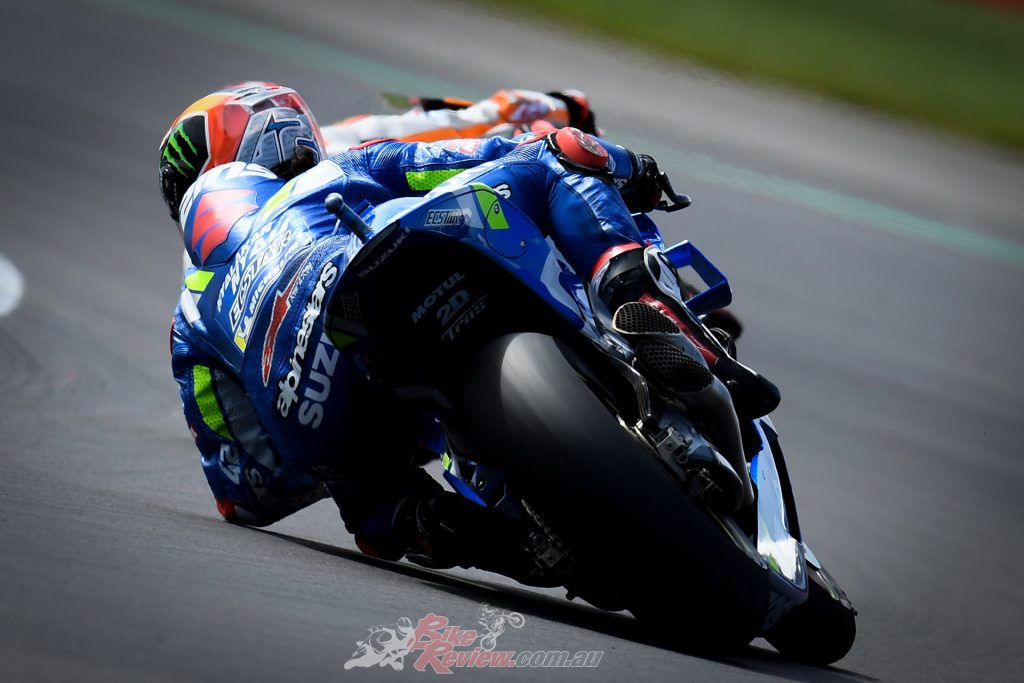 Coming around the final corner to start the final lap, the Suzuki swept around the outside and was alongside Marquez as the two went elbow to elbow, but Rins ended up on the green stuff and Marquez held firm. The number 42 also lost a few metres with the move, and the pressure was on for the remaining five kilometers of the race. Was there time to catch and pass the man in such charge of the Championship?

Through Maggots and Becketts, the Yamaha of Viñales was almost as close to Rins as Rins was to race leader Marquez, with the number 12 on the limit to try and get in the fight. As the corners passed, however, the Honda and Suzuki edged away – and Rins was more than simply hanging in there. With three corners left the Suzuki was Marquez’ shadow, but was there time? The dress rehearsal from a lap before gave us a clue of what was in store: it was going to go down to the final corner. 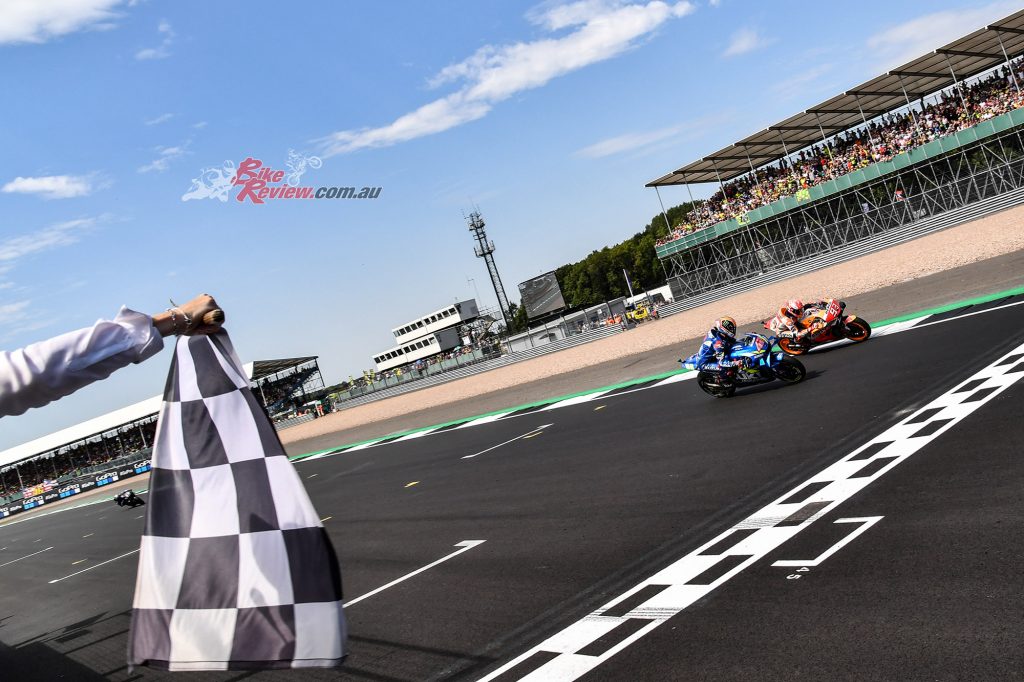 Rins had showed some incredible speed there throughout the race, and the number 42 credited that as a big part of his being able to stay with Marquez. That was now his ace, and as the Honda rider tried to defend, the Suzuki unleashed its awesome corner speed as Rins ran wider and then cut back, barrelling alongside Marquez towards the line. And, by hundredths, coming out on top.

The win was the fourth closest in premier class history, Rins’ second of the season and the first time the gloves have come off for the number 42 in a last lap fight for a premier class victory. 40 years since Sheene vs Roberts was split by 0.030, Rins beat Marquez by just 0.013. For the reigning Champion, it was also a second final corner defeat in a row. 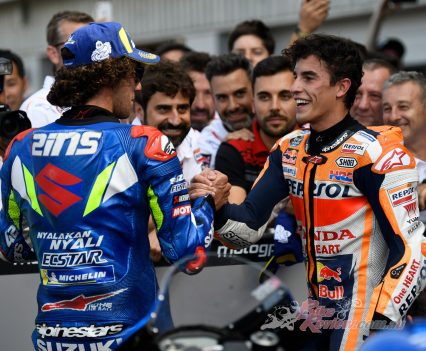 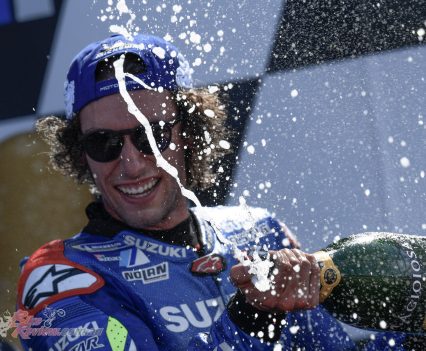 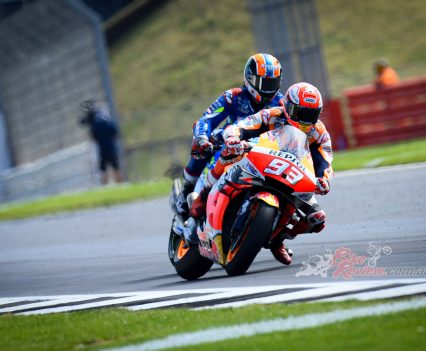 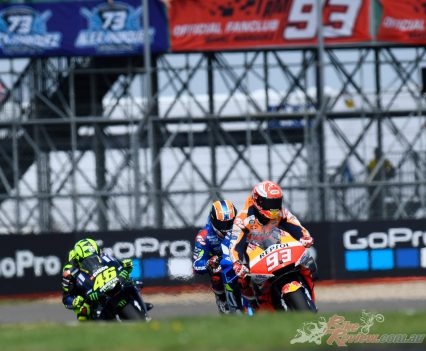 Viñales, then, was forced to spectate around the final sector, but the 2016 Silverstone winner said he got the maximum from the machine for his 60th podium in third. Teammate Valentino Rossi took fourth and the top Yamaha results continued as Morbidelli completed the top five. The number 21 was also the top Independent Team rider.

He stole that honour from home hero Cal Crutchlow (LCR Honda Castrol) as the Brit took P6, crossing the line half a second ahead of Danilo Petrucci (Ducati Team), with Jack Miller (Pramac Racing) and Pol Espargaro (Red Bull KTM Factory Racing) not too far behind either as they took P8 and P9 respectively. Andrea Iannone (Aprilia Racing Team Gresini) completed the top ten after a solid Sunday showing from the Italian. 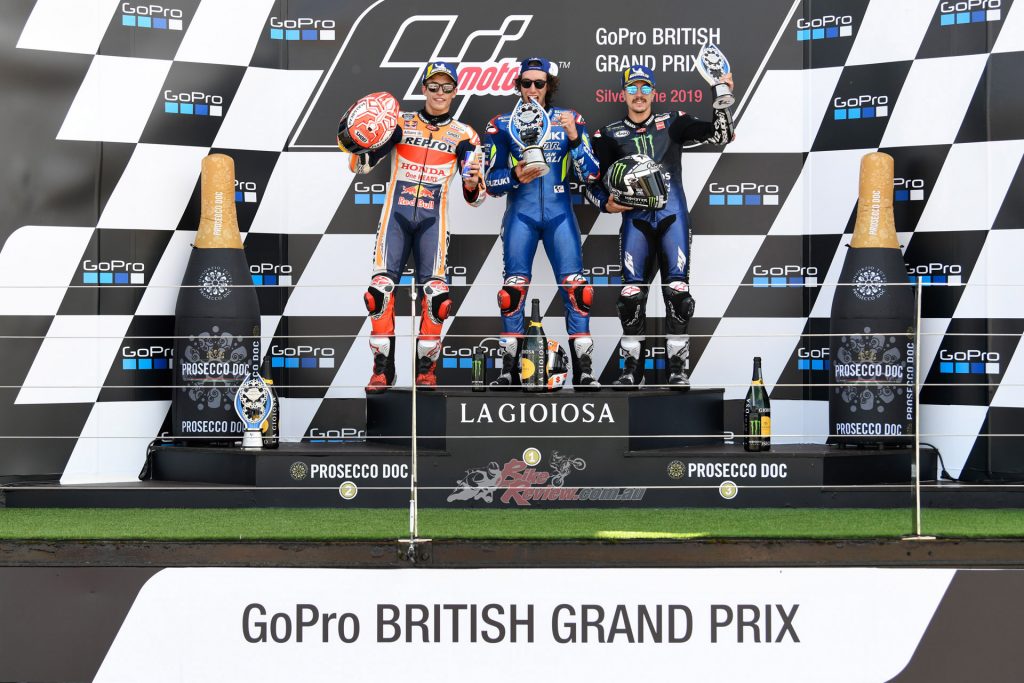 Johann Zarco (Red Bull KTM Factory Racing) didn’t finish after he came into contact with Miguel Oliveira (Red Bull KTM Tech 3) and they both went down, the Frenchman subsequently penalised with three grid positions at his next race. Takaaki Nakagami (LCR Honda Idemitsu) and Tito Rabat (Reale Avintia Racing) crashed but rejoined, Aleix Espargaro (Aprilia Racing Team Gresini) suffered an issue and, of course, neither Quartararo nor Dovizioso saw the flag. Dovizioso, after examination, was given the all clear and returns home from the UK as normal, although he and Quartararo will need to be declared fit in Misano having suffered concussion. 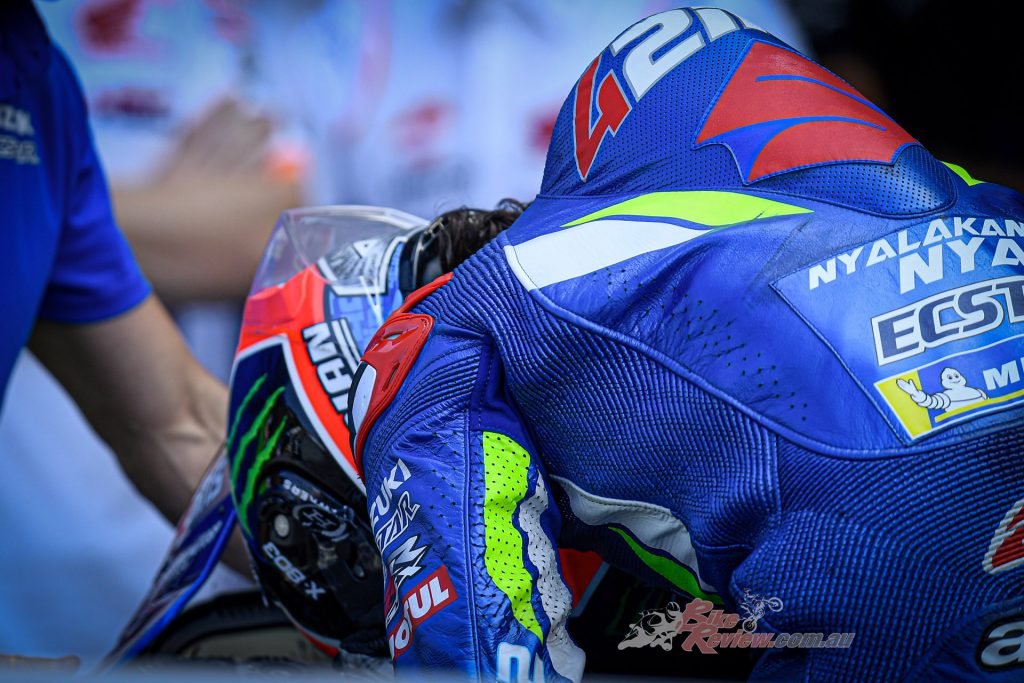 Alex Rins: “Unbelievable, unbelievable! I’ve beaten two legends: Valentino in Texas, Marquez here in Silverstone. It was so crazy. I beat him today but now I need to continue; I know it will be difficult. I made some mistakes, I nearly crashed at the first corner – I had a big moment. Two laps to the end I crossed the line very close to Marc and I thought the race was over but then I saw one lap remaining and thought: ‘wow, Alex, come on you need to keep pushing’. I was able to cut a lot of time in the first and second sectors and then in the last sector Marc was much stronger than me. Into Turn 16 he was able to brake really hard. The last lap was unique though and it was possible for me to overtake.

“I have a lot of confidence with my Suzuki right now. We work so hard during the practices to get the feeling right and I was able to play with my bike to brake harder.”