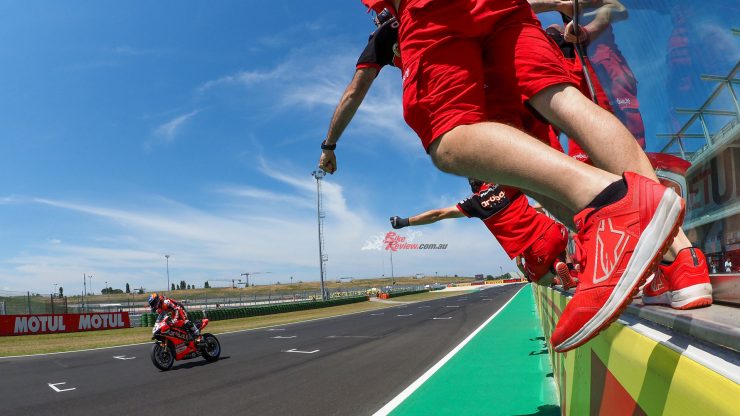 The action kicked off almost immediately at the Misano World Circuit “Marco Simoncelli” as Michael Ruben Rinaldi (Aruba.it Racing – Ducati) claimed an emotional victory in front of fans in the MOTUL FIM Superbike World Championship to claim the second win of his career, and the first on the factory Ducati. 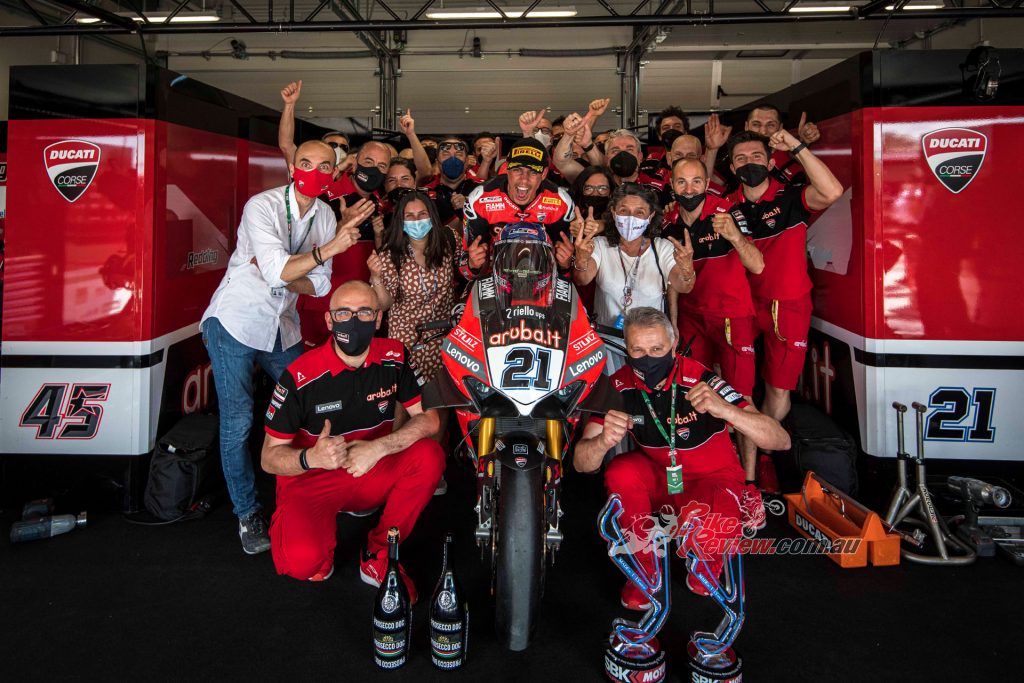 Rea tried to defend on the outside of the left-hander of turn two, which forced Rinaldi around the outside of the next corner but allowed Turkish star Razgatlioglu to briefly take the lead of the race. Soon, Rinaldi made his move on Rea to seize the lead but was unable to build up a gap. 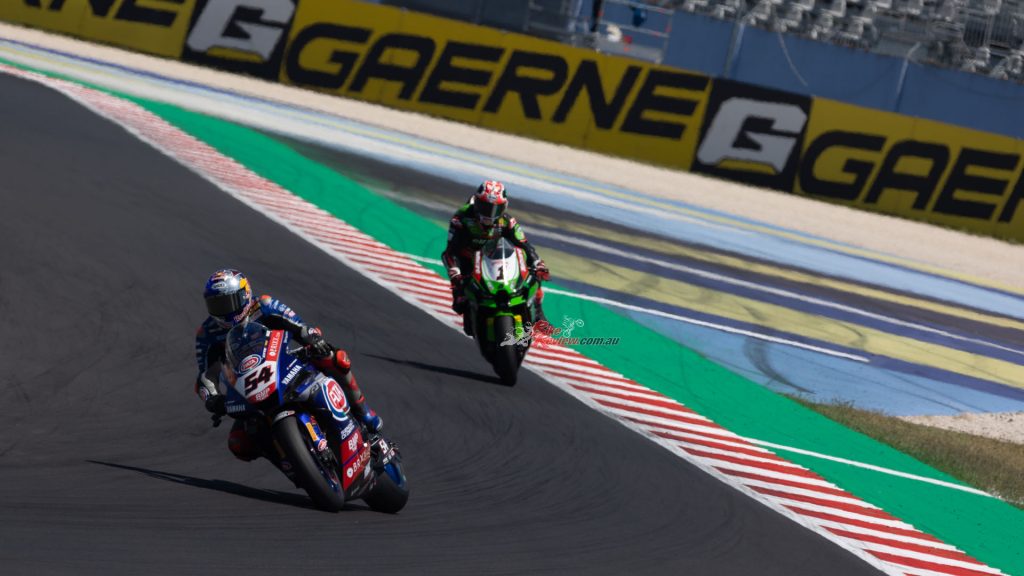 Rinaldi resisted all pressure from the six-time world champion, Rea, in the first ten laps of the race, with the gap fluctuating up to a maximum of half-a-second but with Rea not able to even consider making a move on the race leader. It was a similar story throughout as the two riders looked to apply pressure to each other.

The pressure would eventually pay off for Rinaldi when Rea made a rare mistake at turn one, having to save a massive slide on his ZX-10RR; Rea able to stay on his machine but lost time to Rinaldi as well as second place to Razgatlioglu – the pair around four seconds behind home town hero and victor Rinaldi. 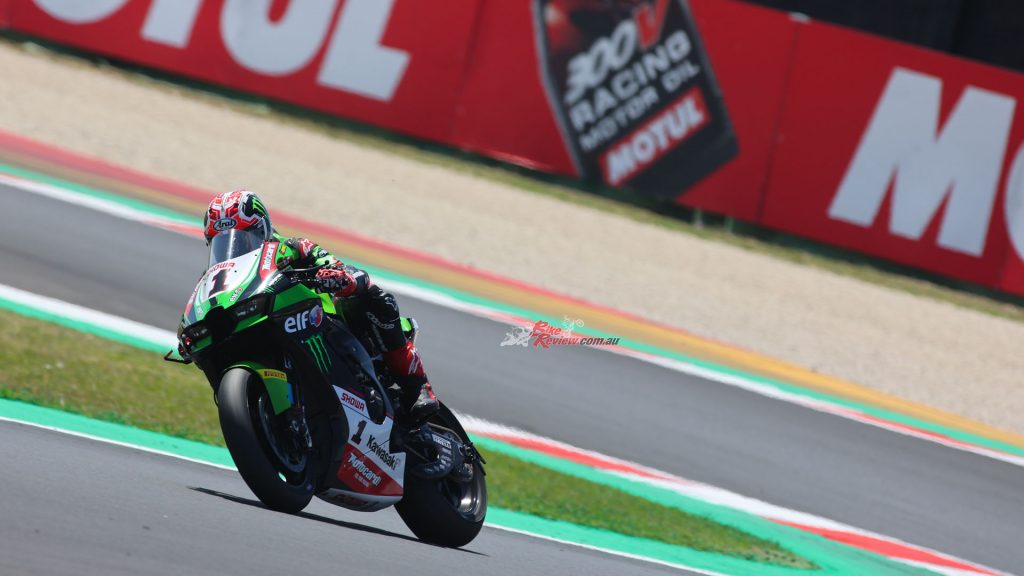 It was Rinaldi’s first victory with the Ducati factory team after a difficult start to the 2021, his second career win in world superbike,  and the first Italian winner at Misano since Marco Melandri in 2017. For Rea, his third place was his 150th podium with Kawasaki, while it was Kawasaki’s 350th race on the podium. Rea also set a new lap record for world superbike at Misano, with the fastest lap of the race, a1’34.476s scorcher.

Alex Lowes (Kawasaki Racing Team WorldSBK) claimed fifth place on his Kawasaki ZX-10RR, just finishing ahead of Team HRC’s Alvaro Bautista after the Spanish rider showed strong pace throughout the weekend. Less than a second behind was rookie and the youngest rider on the grid, Axel Bassani (Motocorsa Racing), with Tom Sykes (BMW Motorrad WorldSBK Team) in eighth. Bautista, Sykes and Bassani engaged in a titanic three-way battle for sixth place, with Sykes holding on until the penultimate lap of the race. 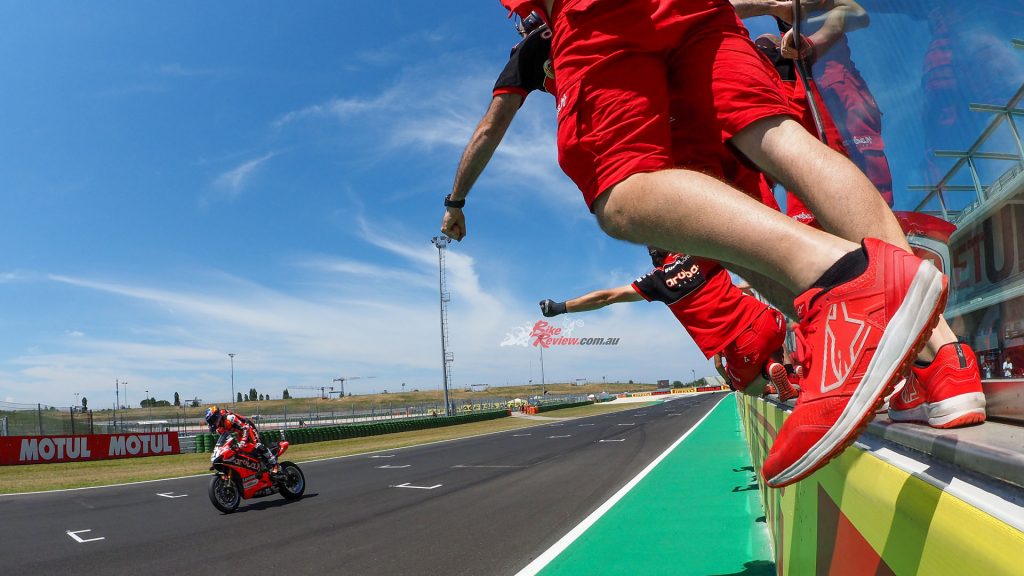 Italian rider Andrea Locatelli (Pata Yamaha with BRIXX WorldSBK) claimed a ninth-place finish after a quiet but solid race battling his way up the order, finishing ahead of the rider he replaced at Pata Yamaha as Michael van der Mark (BMW Motorrad WorldSBK Team) completed the top ten.

After a strong Tissot Superpole session, Lucas Mahias (Kawasaki Puccetti Racing) came home in 11th place while Garrett Gerloff (GRT Yamaha WorldSBK Team) battled from the pitlane, starting there after being sanctioned for a crash with Rinaldi at Estoril, to finish in 12th place. Kohta Nozane (GRT Yamaha WorldSBK Team) and Leon Haslam (Team HRC) engaged in a battle for the majority of the second half of the race, with the Japanese rookie coming out on top; Nozane finishing 13th and Haslam 14th. Tito Rabat (Barni Racing Team) completed the points paying positions with 15th. Haslam and Gerloff were the only two riders to use the standard SCX tyre provided by Pirelli, with the other 19 opting to use the development SCX solution for Race 1. 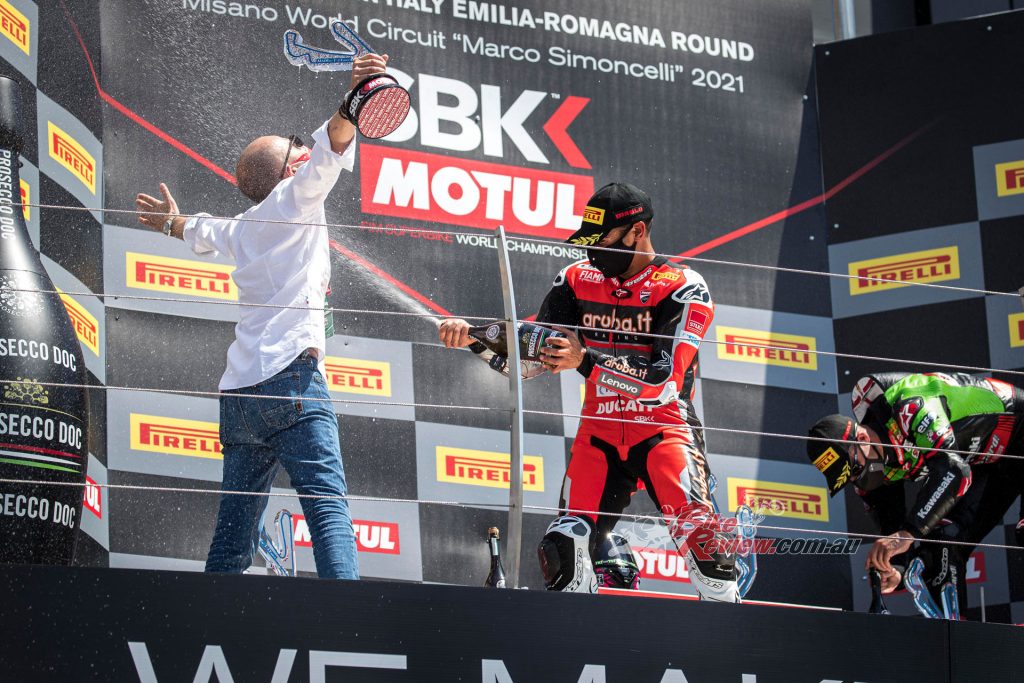 Michael Rinaldi: “Winning the home grand prix is a unique emotion. Today it was even more exciting due to the fans back on the stand after a long time: they are always able to give an extra motivation. The race was long and difficult and I tried to find my pace.  Then Rea’s mistake while I was pushing hard allowed me to have less pressure. The smell of victory made the last two laps incredible for me. Now, however, maximum concentration on the two races tomorrow.”

Razgatlioglu was able to get the jump on pole sitter Jonathan Rea (Kawasaki Racing Team WorldSBK), before Michael Ruben Rinaldi (Aruba.it Racing – Ducati) followed the Turkish star through on the reigning champion a lap later, moving Rinaldi into second place after starting from fourth. 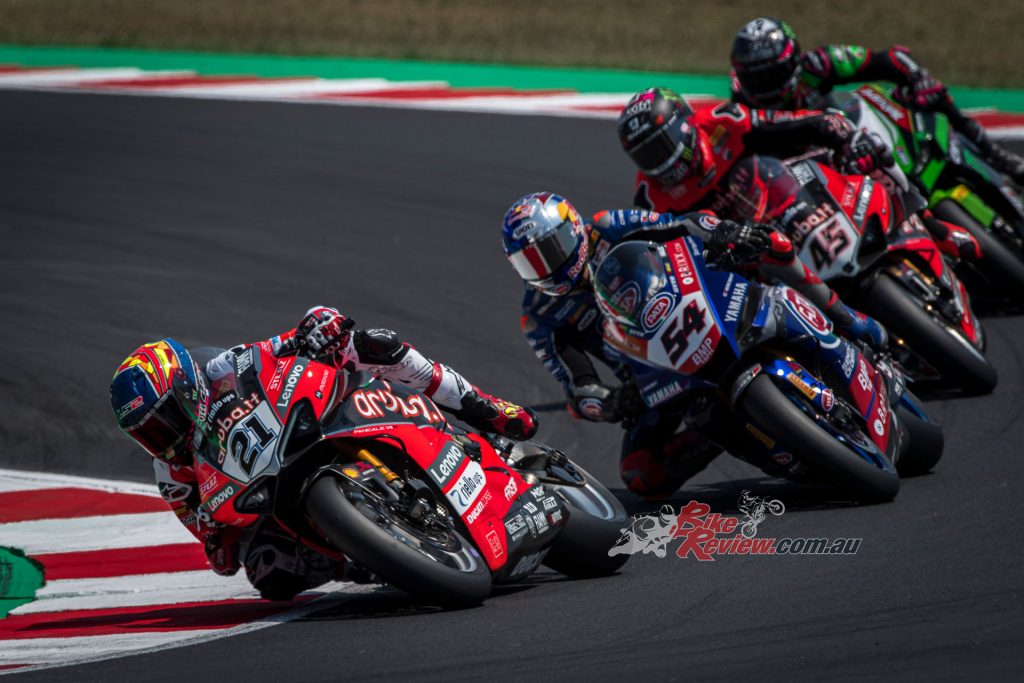 Rinaldi soon had his eyes set on Razgatlioglu for the race lead as he searched for two wins from two, with the pair going side-by-side through turn eight on lap three despite taking alternative racing lines through the corner. Razgatlioglu held on until lap six of 10 before Rinaldi pulled off a stunning move at turn 11 to take the lead of the race. Razgatlioglu tried to stick with Rinaldi but the Italian was able to hold on, with Rea coming home in third place; the trio securing the front row starts for race two.

Redding came home in fourth place to claim a row two start for the afternoon’s race two, joined by Alex Lowes (Kawasaki Racing Team WorldSBK) and Axel Bassani (Motocorsa Racing); the youngest rider on the 2021 grid securing a top-six finish and his best ever result in the championship in the Superpole Race. 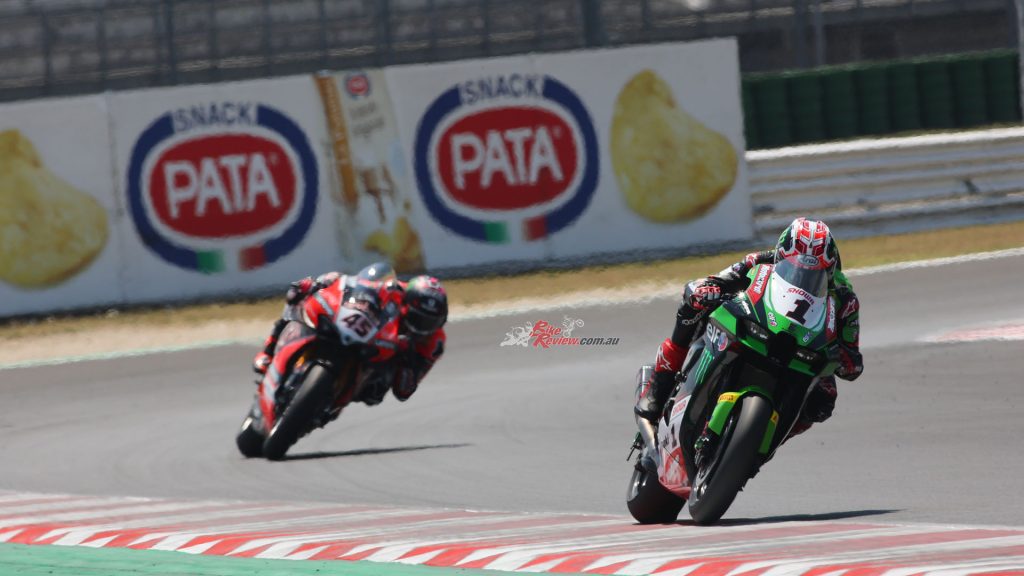 Tom Sykes (BMW Motorrad WorldSBK Team) came home in seventh place to secure a third row start ahead of American Garrett Gerloff (GRT Yamaha WorldSBK Team) who finished eighth after battling from the back of the grid after not setting a time in the Tissot Superpole. Andrea Locatelli (Pata Yamaha with BRIXX WorldSBK) will start ninth for race two.

Chaz Davies (Team GoEleven)’s race ended before it had really started after he crashed on his Ducati Panigale V4 R between turns one and two after making contact with Lucas Mahias (Kawasaki Puccetti Racing), forcing the Welsh rider to retire from the race. Mahias would also retire from the race after a crash on lap nine after he crashed at turn six; the Frenchman able to take his bike back to the pits. Michael van der Mark was also an early retirement after he came off his BMW M 1000 RR at turn one. 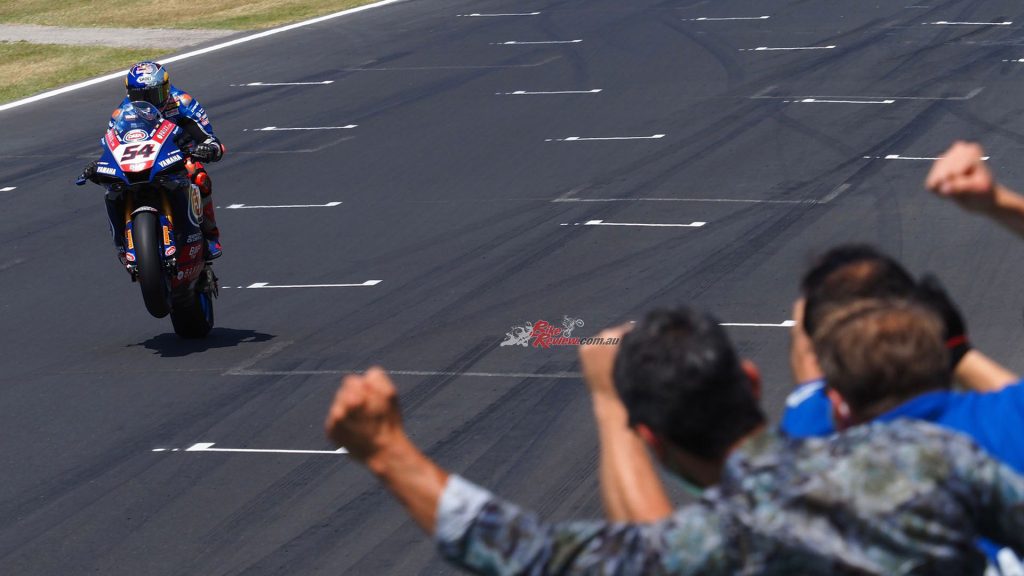 The start was a precursor of what was to come throughout the 21-lap race as Jonathan Rea (Kawasaki Racing Team WorldSBK) moved to the front after he took advantage of Razgatlioglu’s aggressive move on Rinaldi on the opening lap, ducking down the inside the pair of them at turn four. Rinaldi was able to recover to pass Razgatlioglu. 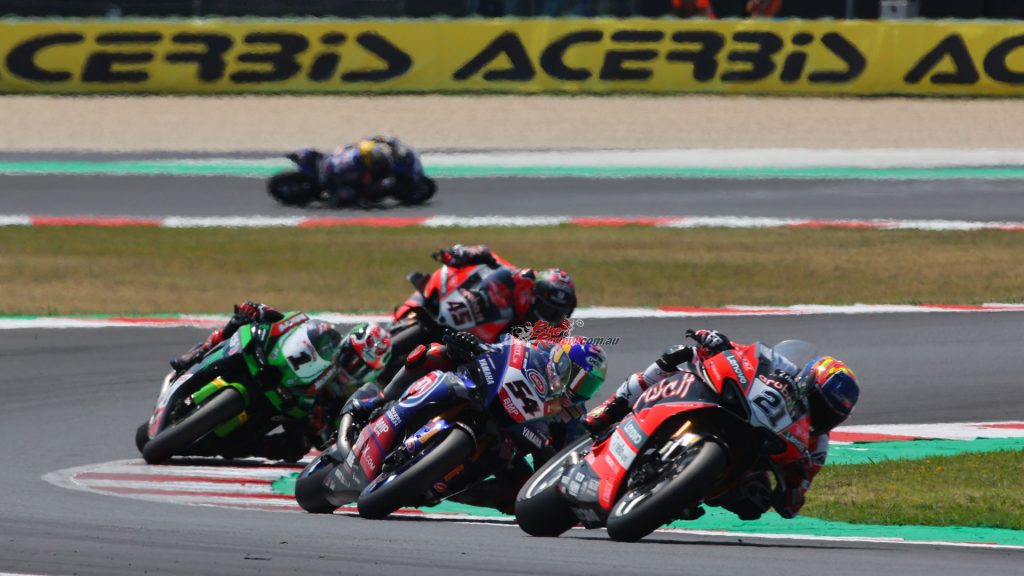 Rinaldi was unable to pull a gap out to Razgatlioglu with the Turkish rider keeping the pressure on the two-time race winner in 2021, before Razgatlioglu caught Rinaldi by surprise at turn 14 on lap eight to take the lead, instantly pulling out a gap of around half-a-second before extending that to over a second at the start of lap one, with Rea able to put pressure on Rinaldi.

As Razgatlioglu continued out in front, Rea started to apply the pressure to Rinaldi with the Italian able to resist the six-time champion and, as the laps counted down, Rinaldi started closing the gap to Razgatlioglu at the front as the trio broke away from Scott Redding (Aruba.it Racing – Ducati). The gap closed to around three tenths between the pair of them before Razgatlioglu once again extended the gap to claim his first victory of the season, with Rinaldi coming home in second ahead of Rea; closing the gap at the top of the standings to just 20 points.

Redding came home in fourth place, the only time in his WorldSBK career that the British rider has not collected a podium finish.    Following was Garrett Gerloff (GRT Yamaha WorldSBK Team) after the American recovered from a challenging weekend to claim a top five position after a late-race battle with Alex Lowes (Kawasaki Racing Team WorldSBK), who rounded out the top six. 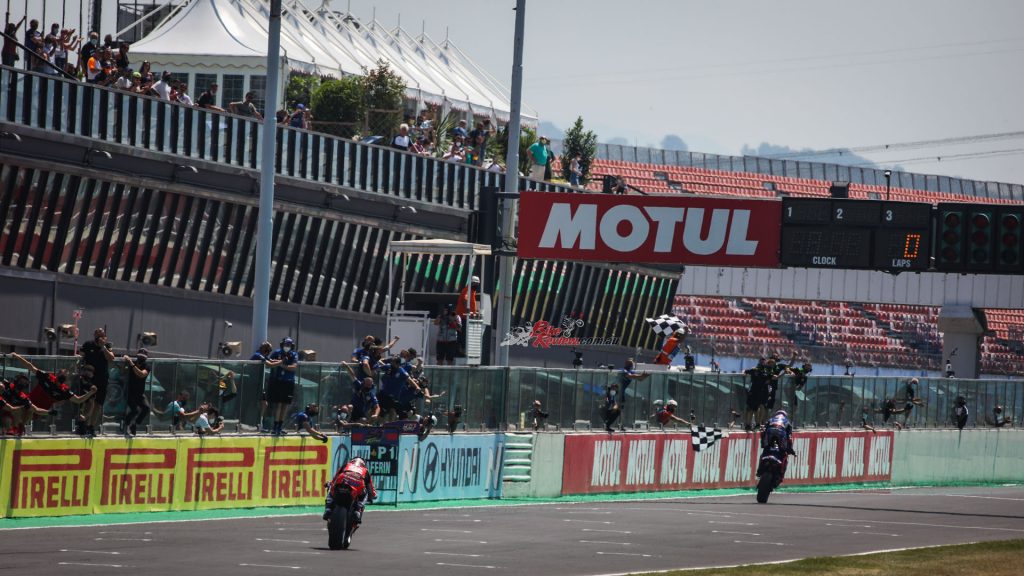 German rider Jonas Folger (Bonovo MGM Action) finished just outside the points after a wide moment through turn four in the latter stages of the race, but he was able to finish ahead of Isaac Viñales (Orelac Racing VerdNatura), Samuele Cavalieri (TPR Team Pedercini Racing) and teammate Loris Cresson rounding out the classified runners. 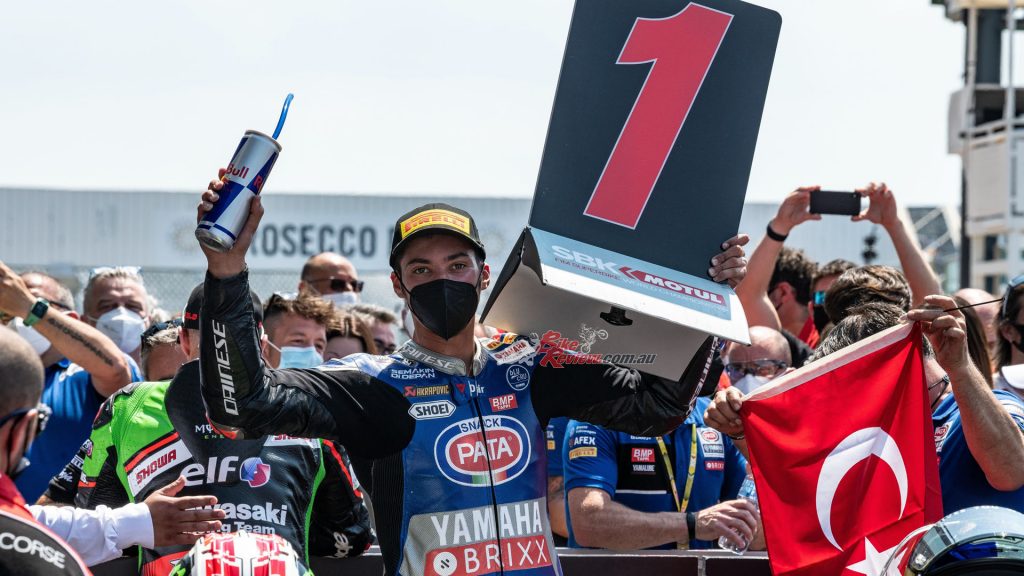 Toprak Razgatlıoğlu: “I’m very happy with this weekend: we just missed the icing on the cake. But I must admit that in Race 2 Toprak and the Yamaha were better than us and that’s why I want to congratulate them. I gave my best trying to chase the victory but in the last laps, I took a high risk and then  I decided to bring home this very important second place. It’s a very important step forward”.