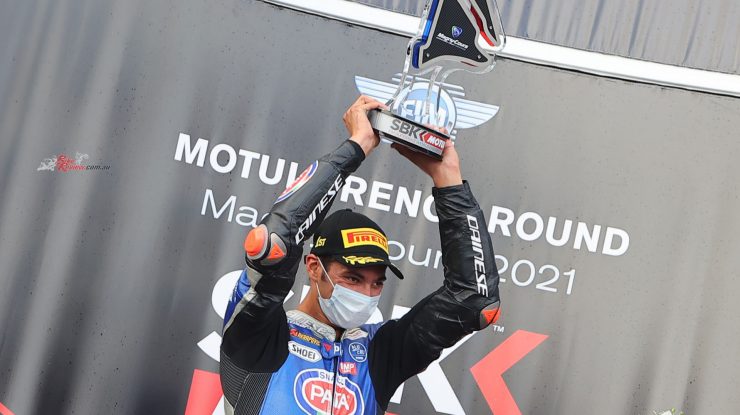 Toprak Razgatlioglu (Pata Yamaha with Brixx WorldSBK) has broken the deadlock with Jonathan Rea (Kawasaki Racing Team WorldSBK) at the top of the championship leader board, scoring victory with an impressive performance to win the 21-lap race one at France’s Magny-Cours cicuit by over four seconds. 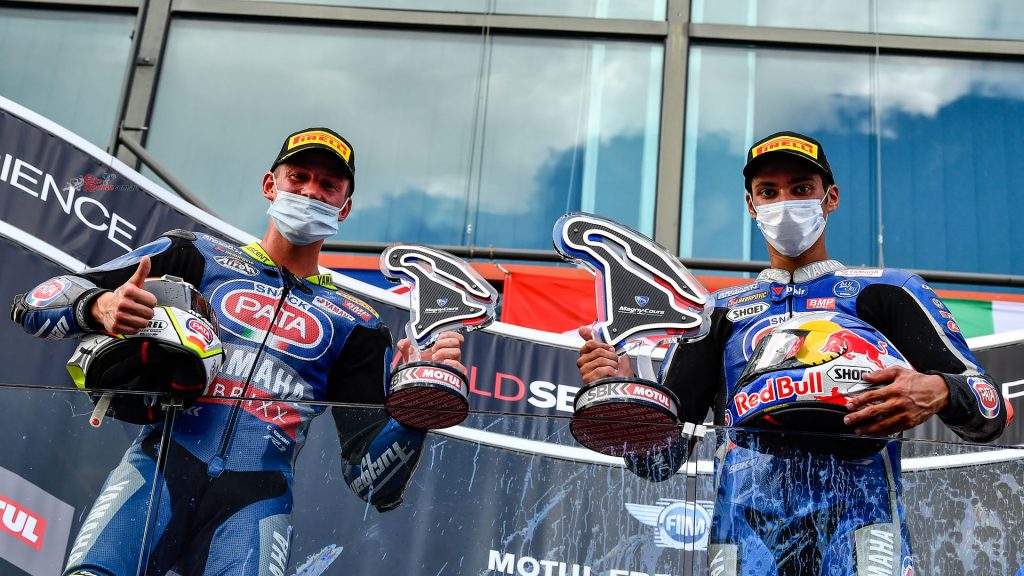 Razgatlioglu got a good start and took the lead through turn one but soon found himself shuffled back thanks to the run down to the turn five hairpin of Adelaide. He responded when Rea took the lead and made a move on lap four at Adelaide to reclaim the lead of the race before he was able to pull out enough of a gap to keep Rea at arm’s length.

Rea was able to respond as the laps progressed, closing the gap to just a couple of tenths but could not make a move stick before Razgatlioglu extended his lead out in front to more than a second ahead of Rea, holding on to secure his second victory in a row following on from his win in race two at Navarra. Rea’s second place extends his winless drought to seven races since he won at Assen in race two. Razgatlioglu showed remarkable consistent pace throughout the 21-lap encounter, always lapping in the 1’37s bracket and he also becomes the first Yamaha rider to take 18 podiums in a single season. 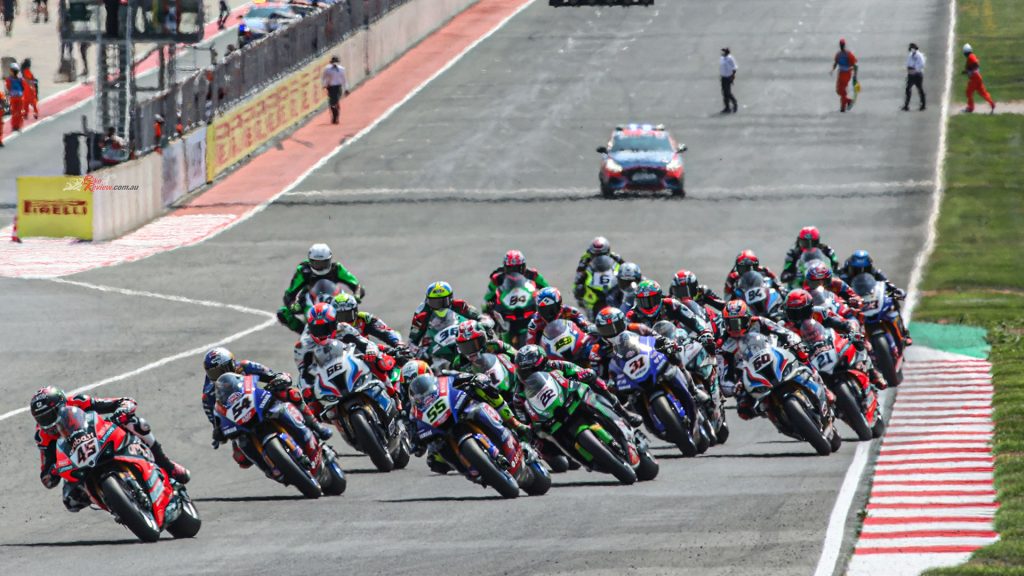 Andrea Locatelli (Pata Yamaha with Brixx WorldSBK) claimed his third podium in WorldSBK with third place after he got a good start to the race to move up the field from fifth place, before battling the even faster-starting Michael Ruben Rinaldi (Aruba.it Racing – Ducati) for fourth place; eventually passing the Italian at turn five on lap 12. He then gained a position on lap 17 when Alex Lowes (Kawasaki Racing Team WorldSBK) crashed at turn eight on lap 17, forcing the British rider out of the race. It meant Locatelli was able to claim third place with Rinaldi being promoted to fourth.

Michael van der Mark (BMW Motorrad WorldSBK Team) claimed fifth place after battling from ninth on the grid, with the Dutchman enduring a difficult morning with no running in free practice 3. He finished two seconds clear of Alvaro Bautista (Team HRC) in sixth place as all five manufacturers were represented in the top six.There was a stunning battle for seventh place during the race between numerous riders which came down to the final chicane. Chaz Davies (Team GoEleven) came home in seventh place with rookie Axel Bassani (Motocorsa Racing) and Tom Sykes (BMW Motorrad WorldSBK Team) finishing eighth and ninth. Leon Haslam (Team HRC) rounded out the top ten after starting inside the top six as the British rider fell back throughout the latter stages of the race. 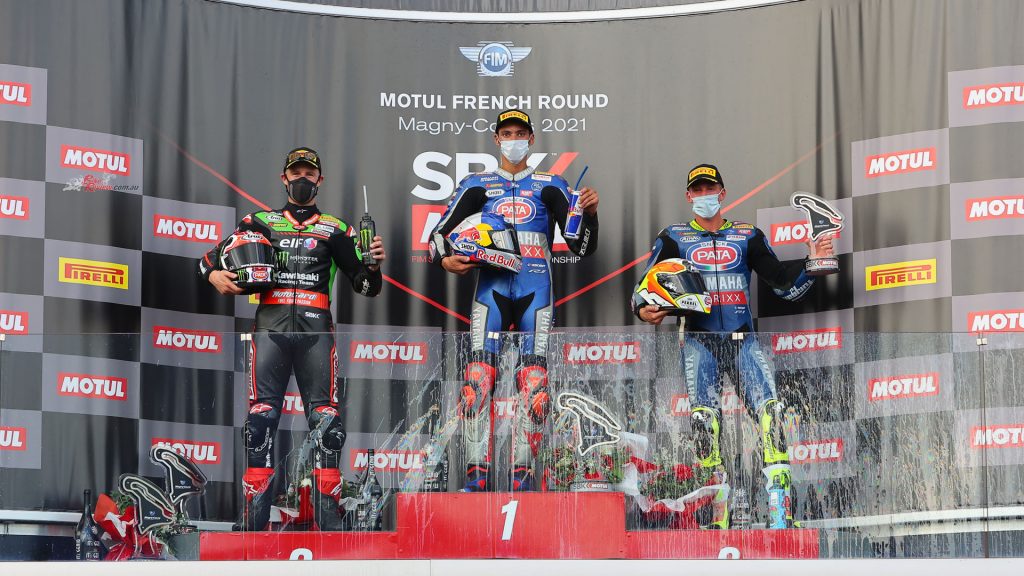 American star Garrett Gerloff (GRT Yamaha WorldSBK Team) claimed 11th place, behind the incredible toussle for seventh place, just two tenths away from Haslam. Scott Redding (Aruba.it Racing – Ducati) started from eighth place and was unable to fight his way through the field as he fell back down through the order to take 12th place despite a lap 19 crash as he looked to make a move on Sykes at turn 13; Redding making no contact with Sykes but coming off his bike before he re-joined the race. Local rider Christophe Ponsson (Gil Motor Sport – Yamaha) was 13th at his home round as he claimed more points for his campaign, finishing less than a second ahead of Tito Rabat (Barni Racing Team), with Isaac Viñales (Orelac Racing VerdNatura) rounding out the points.

Jonas Folger (Bonovo MGM Action) had a difficult race but came home in 16th place while Kohta Nozane (GRT Yamaha WorldSBK Team) and Loris Cresson (OUTDO TPR Team Pedercini Racing) had a battle for 17th place that went down to the line; the duo separated by just 0.082s as Nozane beat Cresson. Leandro Mercado (MIE Racing Honda Team) was the only other retirement apart from Lowes after he crashed out turn 13 in the early stages of the race. 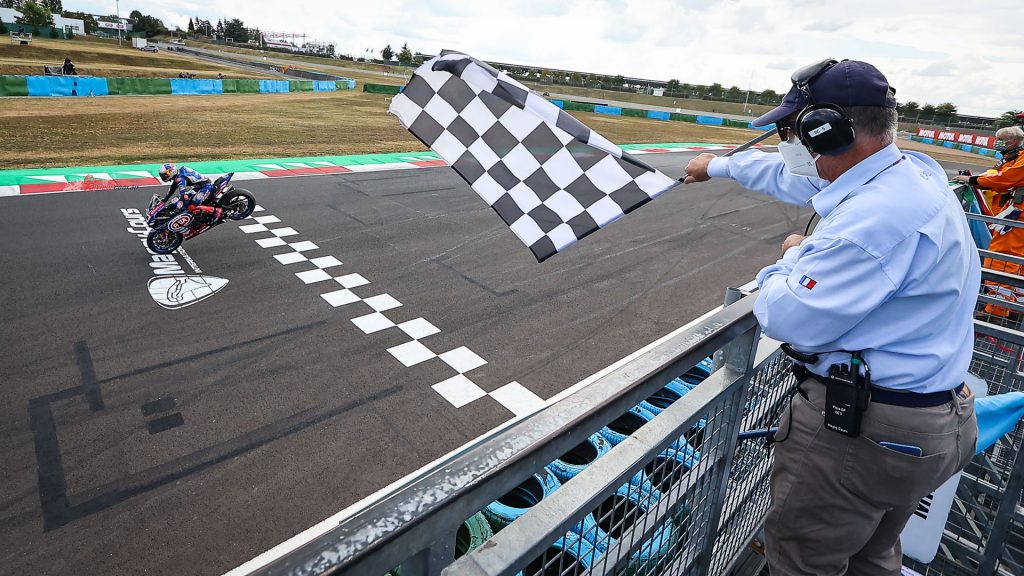 Toprak Razgatlioglu: “For me, a very good race. I want to thank my team for an incredible job this weekend, we improve the bike a lot. I like this track and on Friday, we did a race simulation and I focused on consistent lap times. When I passed Jonny today, I tried to do consistent lap times, and I won the race… Five points isn’t a big gap because every weekend, there’s a lot of big changes this year. I am focused on the next race because I want 10 or 12 race wins. I will try to fight again for the win on Sunday, but I think in the Superpole Race, it won’t be easy as Jonny is very fast. Everyone is very fast, but my dream this weekend is for three wins. It’s not easy, but we will try!”

Tissot Sprint Race
Jonathan Rea (Kawasaki Racing Team WorldSBK) was the victor after a late penalty for Toprak Razgatlioglu (Pata Yamaha with Brixx WorldSBK) for a track limits infringement on the final lap, with the pair battling it out throughout the 10-lap race.

Rea and Razgatlioglu led the way from the start with Razgatlioglu taking the lead of the race on the second lap of ten at the turn 5 Adelaide hairpin. Rea was able to keep Razgatlioglu under pressure throughout the ten laps and this paid off into the Imola chicane on the final lap as Rea made a move for the lead on the final lap. Rea’s lead lasted just a few seconds, though, as Razgatlioglu responded almost instantly as he got up the inside of turn 15 to take the lead. However, Razgatlioglu was deemed to have exceeded track limits at turn 10 on the final lap meaning he was demoted one place by the FIM WorldSBK Stewards for the infringement. 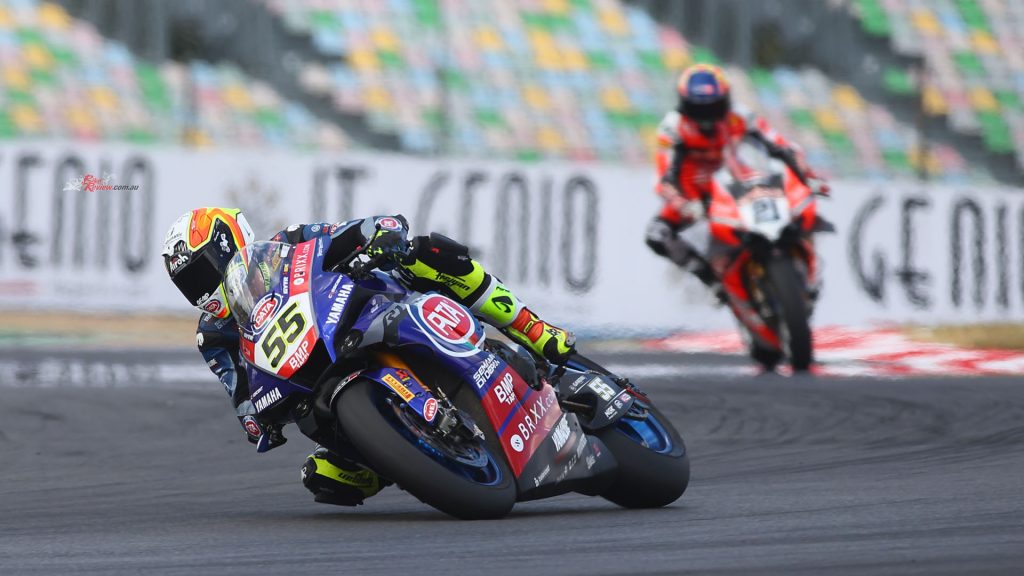 Despite their battle throughout the entire race, the duo were able to pull away from third-placed Alex Lowes (Kawasaki Racing Team WorldSBK), who took his first podium since Donington Park, securing a front row start for this afternoon’s race two. Lowes had to battle with Italian rookie Andrea Locatelli (Pata Yamaha with Brixx WorldSBK) with the British rider coming out on top.

Locatelli will lead away the second row for race two after finishing in fourth place, while Scott Redding (Aruba.it Racing – Ducati) was able to bounce back from a difficult Saturday to claim fifth place in the Superpole Race meaning he will start from fifth place in race two as he looks to get back on the podium. He will start alongside his 2022 teammate, Michael van der Mark (BMW Motorrad WorldSBK Team), with the Dutchman claiming sixth in the Superpole Race. 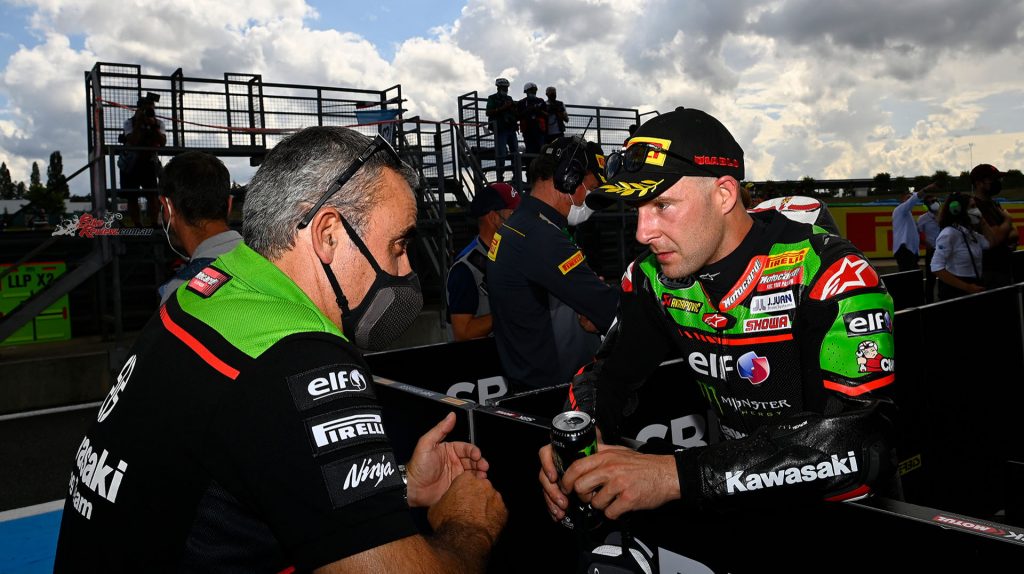 Alvaro Bautista (Team HRC) will line up in seventh place in race two after battling back to finish seventh in the Superpole Race, alongside Chaz Davies (Team GoEleven) and Leon Haslam (Team HRC), with all five manufacturers starting from inside the top nine in the afternoon’s race twoP.

Race 2
Race 2 for the Motul French Round at the Circuit de Nevers Magny-Cours gave Toprak Razgatlioglu (Pata Yamaha with Brixx WorldSBK) his second win of the weekend to extend his MOTUL FIM Superbike World Championship lead to 7 points over Jonathan Rea (Kawasaki Racing Team WorldSBK). A race that saw their rivalry ignite was relentless from the start, with the two putting on a spectacular show clear of the opposition.

Razgatlioglu got the better start from pole position and initially held the lead of the race but used a wider line through the long right-hander of Estoril, allowing Rea to sneak up the inside to take the lead. On the run down to turn five, Alex Lowes (Kawasaki Racing Team WorldSBK) wanted to get involved in the lead battle but Razgatlioglu and Rea were able to keep him at arm’s length. 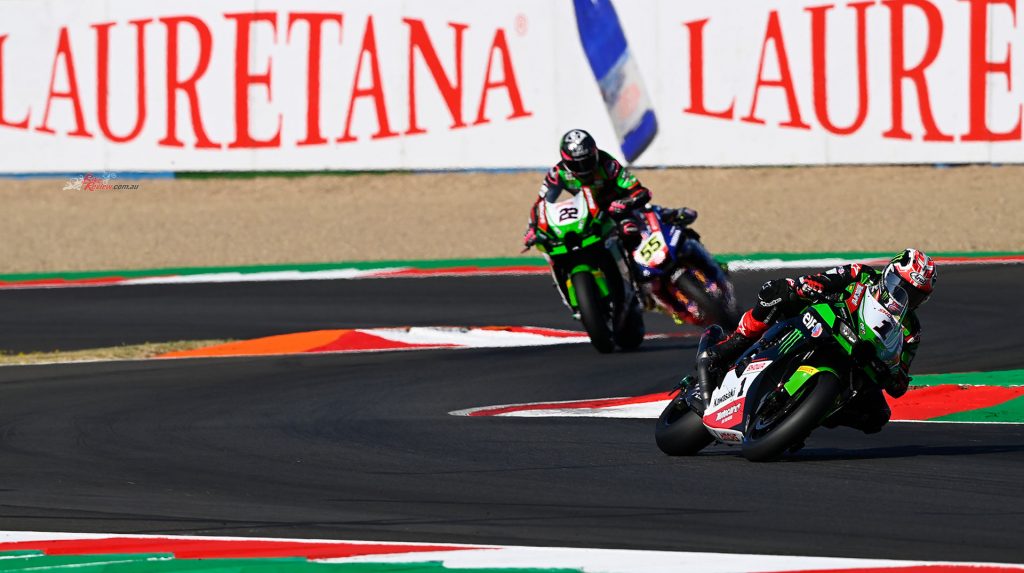 Scott Redding (Aruba.it Racing – Ducati) was running in third from the early stages of the race after jumping up from the second row of the grid as he claimed his first podium of the weekend after a challenging weekend for the British rider. Third place for Redding meant he lost ground in the championship to leader Razgatlioglu, while Rea also gained on Redding in the standings.

The race-winning move came on lap 11 after an incredible two laps of battling between Razgatlioglu and Rea with the Turkish star overtaking Rea into the turn five hairpin of Adelaide on lap 10 before the six-time champion responded into the Imola chicane. Rea retained the lead of the race for just another lap before Razgatlioglu was able to pass Rea again into Adelaide. The pair battled it out throughout the race before Rea settled for second after making a save in the closing stages of the race. 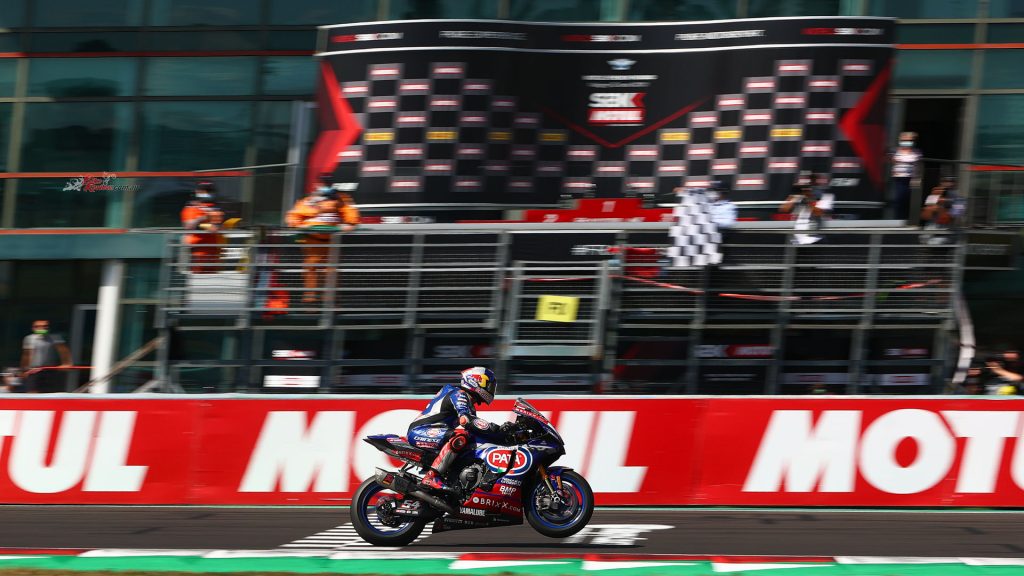 Andrea Locatelli (Pata Yamaha with Brixx WorldSBK) claimed fourth place after another strong weekend for the Italian rookie, finishing two seconds behind Redding at the end of the race. Chaz Davies (Team GoEleven) claimed a top five finish for his first since race two at the TT Circuit Assen, with Davies and Alvaro Bautista (Team HRC) both putting pressure on Locatelli for fourth place.

Michael Ruben Rinaldi (Aruba.it Racing – Ducati) was seventh, around two seconds back from Bautista, with Michael van der Mark (BMW Motorrad WorldSBK Team) in eighth. Dutchman van der Mark had been running in the top four but a scary incident with Locatelli on the start-finish straight meant he lost time and positions and was unable to get back to the front of the group. He faced pressure from Garrett Gerloff (GRT Yamaha WorldSBK Team) for eighth but held on with the American in ninth, with Tom Sykes (BMW Motorrad WorldSBK Team) rounding out the top ten. 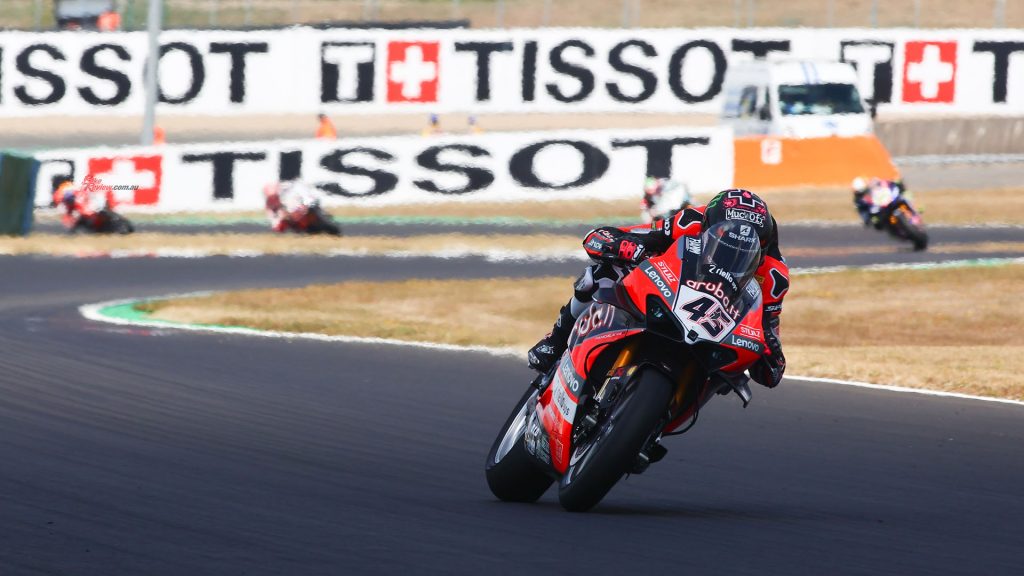 Axel Bassani (Motocorsa Racing) continued his strong form with 11th place although the Italian rider did lose time to the group ahead, with Christophe Ponsson (Gil Motor Sport – Yamaha) claiming 12th place for a strong result in front of his home fans. He battled throughout the race with compatriot Lucas Mahias (Kawasaki Puccetti Racing) directly behind Ponsson.

Japanese rookie Kohta Nozane (GRT Yamaha WorldSBK Team) claimed his best result of the French round with 14th place and two points, with Tito Rabat (Barni Racing Team) completing the points. Rabat had got ahead of the Ponsson-Mahias battle but fell back in the latter stages of the race. 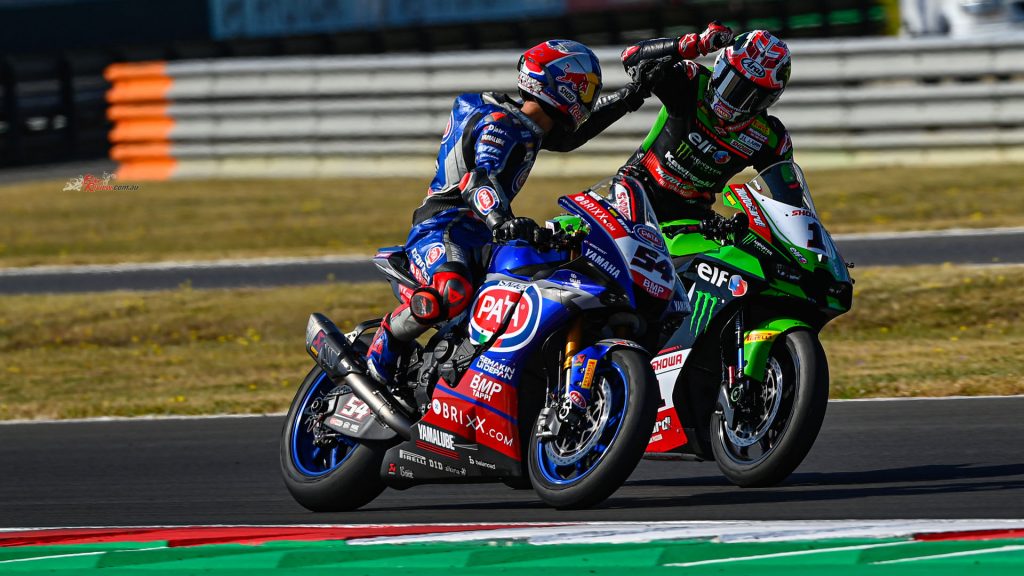 Despite a strong start to the race, Alex Lowes (Kawasaki Racing Team WorldSBK) crashed out of the race in the early stages of the race with an accident on the entry of the Nurburgring chicane, with Lowes retiring from the race. Leon Haslam (Team HRC) had an accident at the same corner shortly after, forcing the Honda rider out of the race. 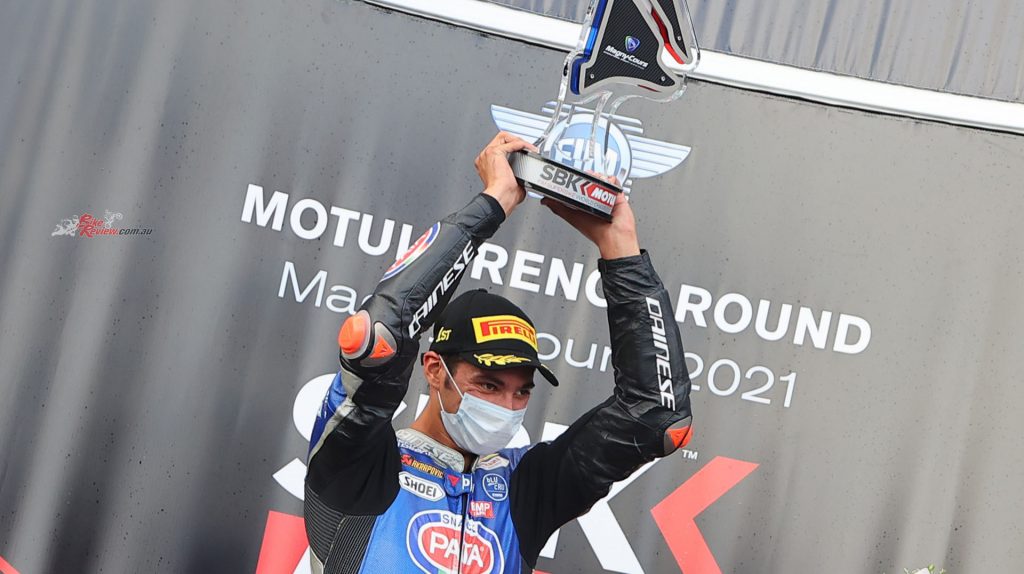