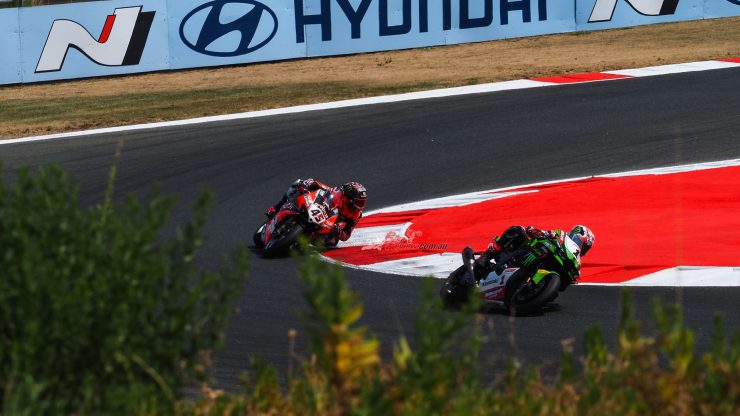 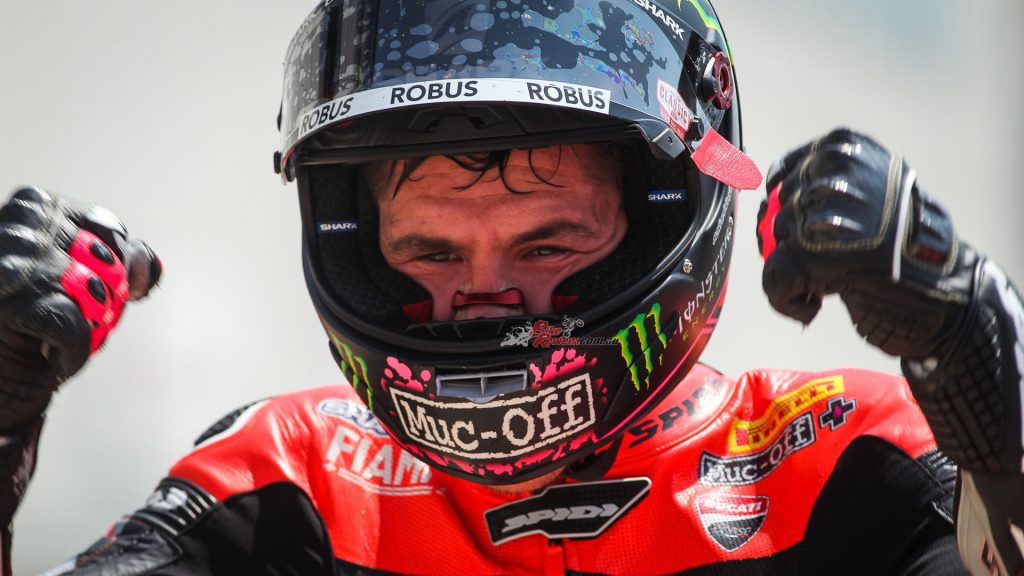 Toprak Razgatlioglu on the Pata Yamaha came in third and lags Rea by seven points.    It was Redding’s second consecutive victory after a win at Autodrom Most last round and the ninth WorldSBK victory of his career.

As the lights went out, Redding got the jump over polesitter Rea into turn one but Redding’s advantage did not last long as Rea fought back to re-take the lead of the race at turn seven, also withstanding an early challenge from rookie Andrea Locatelli (Pata Yamaha with Brixx WorldSBK) on the opening lap. 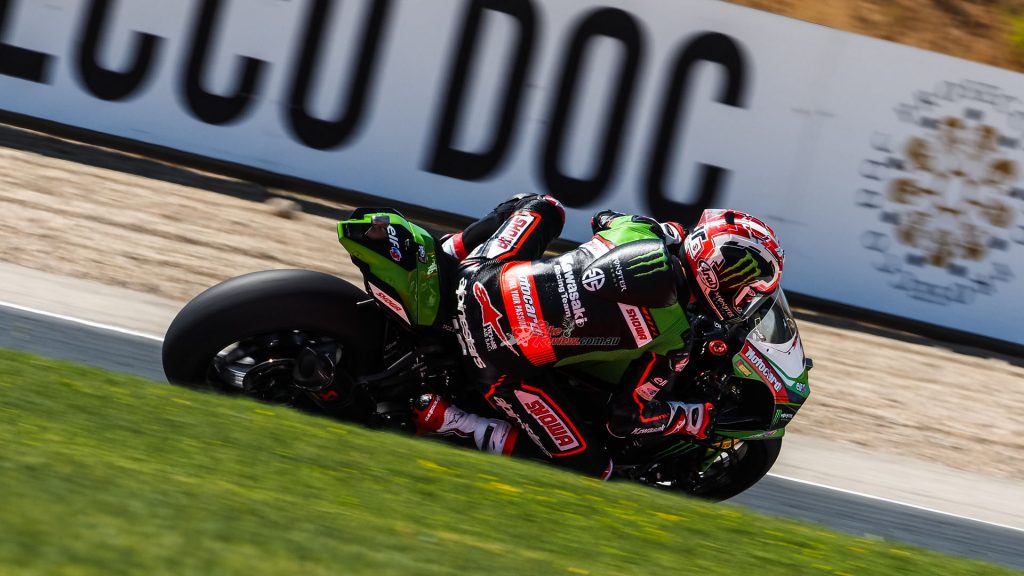 At the start of lap six, Redding got a better run out of the turn 15 right-hand hairpin to make a move on Rea into the incredibly fast right-hander of turn one, getting the move completed just before they turned in for the opening turn of the lap, before pulling out a gap of over a second on Rea over the next handful of laps.

Toprak Razgatlioglu (Pata Yamaha with Brixx WorldSBK) was on a mission from the start, battling from eighth place on the grid to fourth on the opening lap.  He found himself behind teammate Locatelli, but spent numerous laps on his tail before passing the rookie on lap seven after the Italian ran wide. 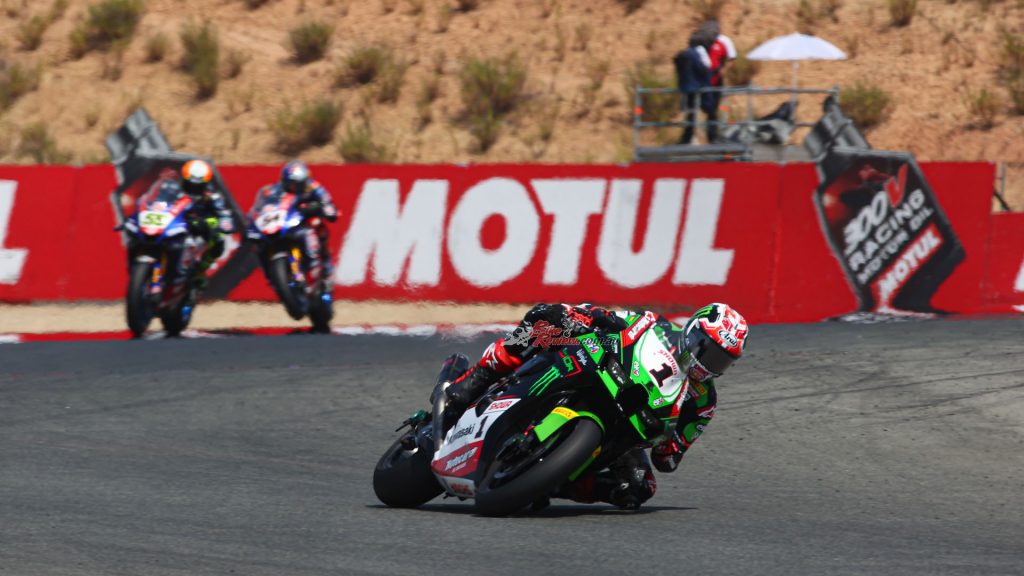 Rea was running in second place but survived errors at turn nine and a big moment before running wide a on lap 15, losing a total of around two seconds to Redding.   But he did not lose out to Razgatlioglu in either the race or the championship battle; Rea extending his lead over Razgatlioglu to seven points.

There were plenty of battles up and down the field as riders searched for the best possible position, with Alex Lowes (Kawasaki Racing Team WorldSBK) coming home in fifth place behind Redding, Rea, Razgatlioglu and Locatelli, with Tom Sykes (BMW Motorrad WorldSBK Team) leading teammate Michael van der Mark in sixth. 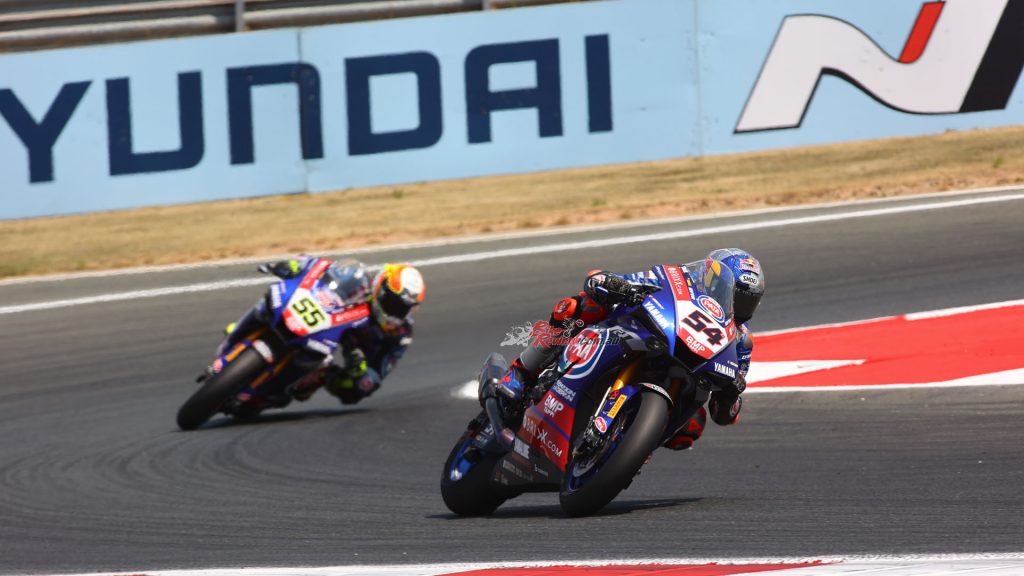 Axel Bassani (Motocorsa Racing) and Garrett Gerloff (GRT Yamaha WorldSBK Team) had a battle in the latter stages of the race over eighth place, with American star Gerloff unable to make a pass on the youngest rider on the WorldSBK grid, Bassani holding on to take eighth place with Gerloff in ninth. Michael Ruben Rinaldi (Aruba.it Racing – Ducati) completed the top ten after a challenging race one, the Italian involved in battles in the midfield throughout the race. 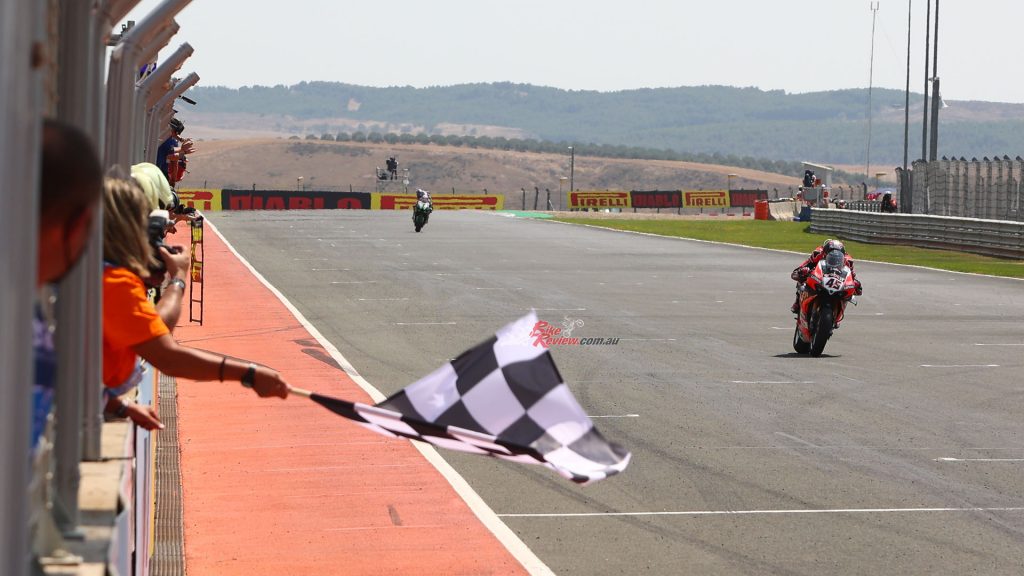 Lucas Mahias (Kawasaki Puccetti Racing) had an incident on his own at turn 11. Chaz Davies (Team GoEleven) retired from the race after he crashed on his own at turn nine while, at the same time, Alvaro Bautista (Team HRC) had a crash at turn 12 but was able to re-join before bringing his machine back to the pits.

Tissot Superpole Race
The lead MOTUL FIM Superbike World Championship trio were engaged in battle throughout the 10-lap encounter that was won by Scott Redding (Aruba.it Racing – Ducati) as he made it back-to-back victories at the Circuito de Navarra and his tenth WorldSBK career; and also the first time he has claimed three victories on the bounce in his career following on from his Race 2 victory at Most. 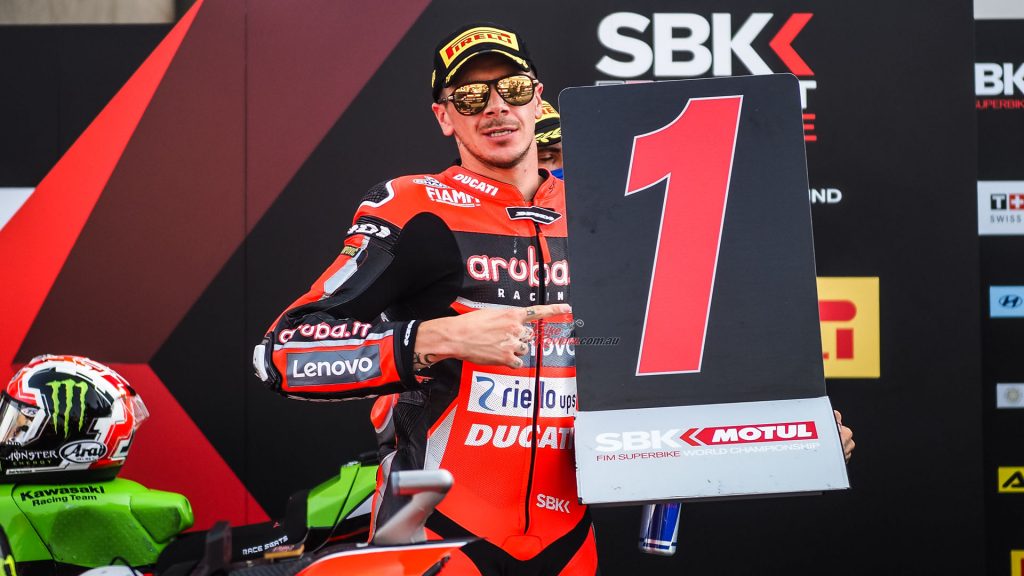 Once again, it was Redding who got the jump on Jonathan Rea (Kawasaki Racing Team WorldSBK) as the lights went out while Toprak Razgatlioglu (Pata Yamaha with Brixx WorldSBK) made up ground from eighth on the grid to run in second on the opening lap. The championship leading trio battled it out through the opening laps of the ten-lapper with all three taking turns to lead the race; Razgatlioglu able to take advantage of Redding and Rea’s fight to move back into second before making a move on Rea at turn one to take the lead. The trio continued to battle it out before Redding was able to pull away to take victory from Rea, with Razgatlioglu third.

Andrea Locatelli (Pata Yamaha with Brixx WorldSBK) claimed fourth place for the fourth consecutive race and will lead the second row away from the lights in Race 2, with Alex Lowes (Kawasaki Racing Team WorldSBK) in fifth. Lowes was able to pass Locatelli throughout the 10-lap encounter, but Locatelli responded to claim fourth. Tom Sykes (BMW Motorrad WorldSBK Team) will complete the second row after sixth place in the Superpole Race. 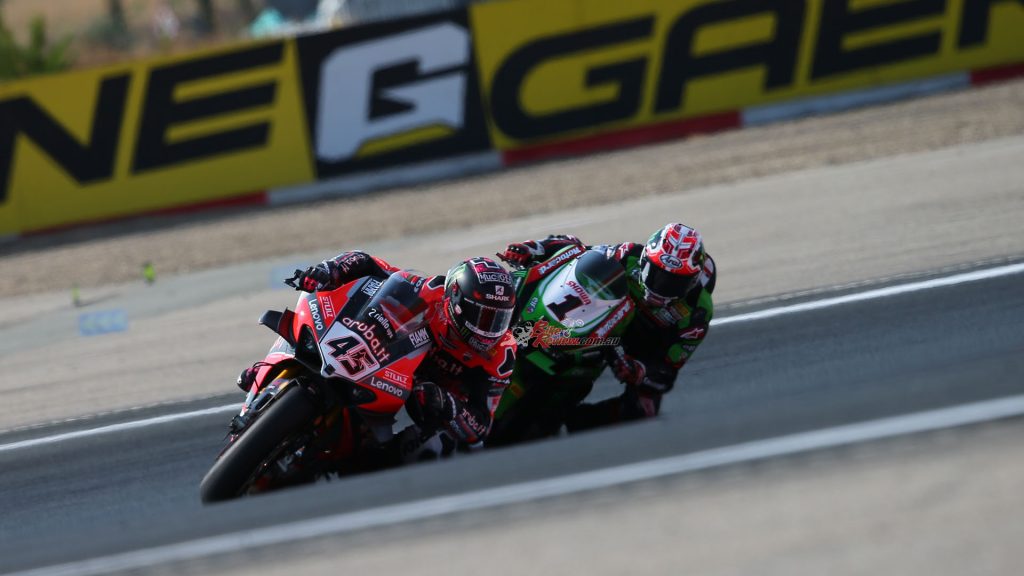 Race Two
The Championship’s top three battled it out for race two honours at the Circuito de Navarra with Toprak Razgatlioglu coming out on top and locking up the championship lead, with Razgat and six time world champ Jonathan Rea sitting equal on 311 points. On a winning race countback, Razgatlioglu is the official leader heading to the French round. 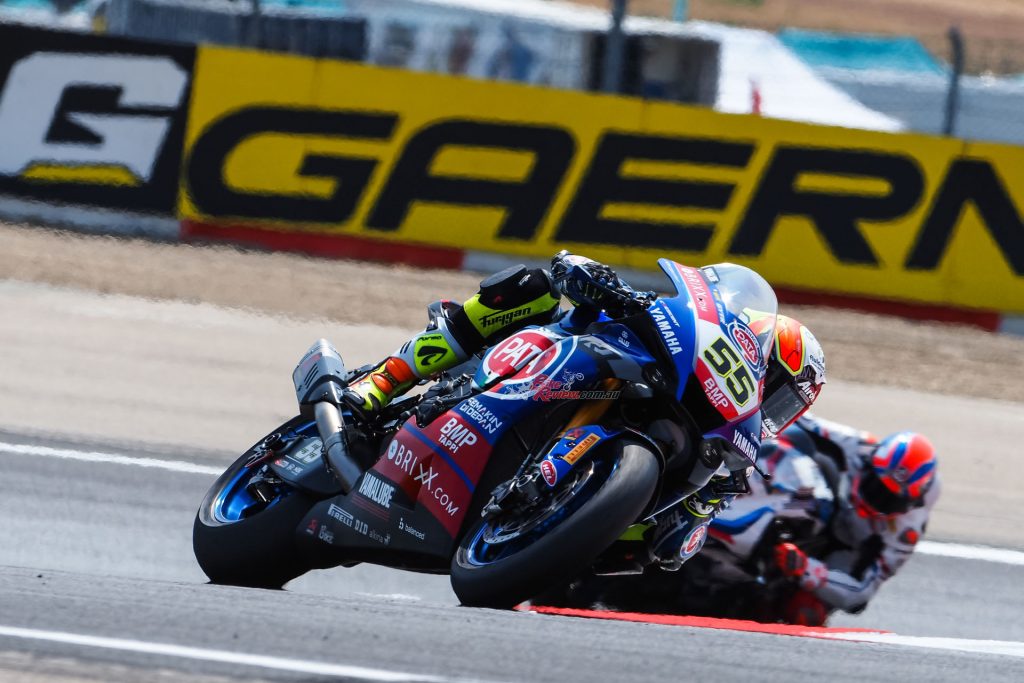 Andrea Locatelli (Pata Yamaha with Brixx WorldSBK) and teammate Toprak Razgatlioglu got lightning starts from Navarra’s race two 22-lap encounter, the race shortened by one lap following a delayed start after the warm-Up lap had been completed due to an issue with Kohta Nozane (GRT Yamaha WorldSBK Team) on the grid. Locatelli swept around the outside of Razgatlioglu and Rea at the start while Rea dropped back behind his teammate, Alex Lowes.

Locatelli and Tom Sykes (BMW Motorrad WorldSBK Team) ran wide in the early stages of the race which forced the pair down the order, allowing Lowes to move up before Locatelli fought back to run in fourth place. 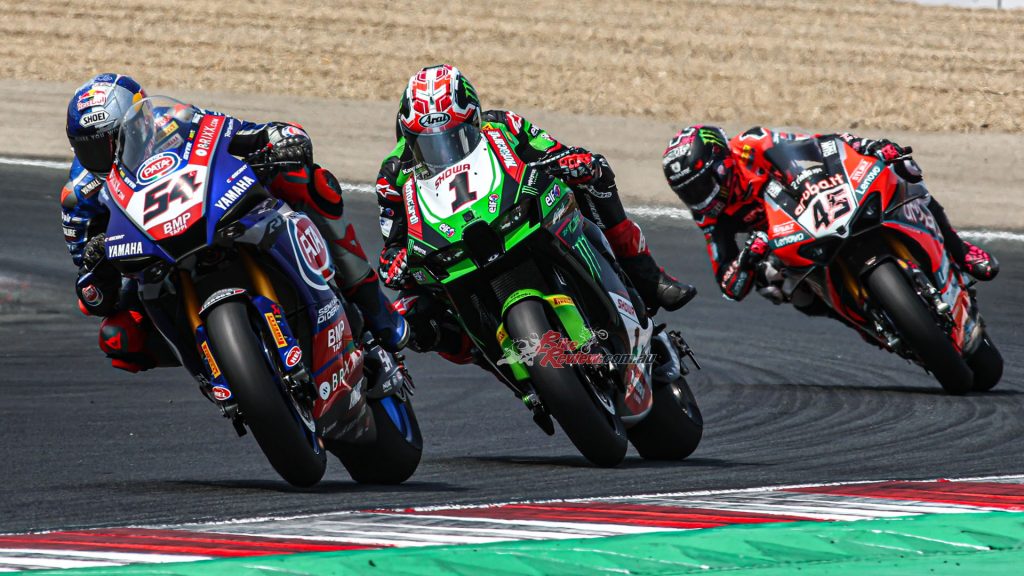 The three major rivals – Jonathan Rea (Kawasaki Racing Team WorldSBK), Scott Redding (Aruba.it Racing – Ducati) and Razgatlioglu – exchanged positions in the opening laps of the race before it settled down slightly with Razgatlioglu leading the race ahead of Rea and Redding.

On Lap 17, Rea saved a front-end slide heading into turn 15 which allowed Redding to close the gap to Rea throughout lap 18, before the pair went side-by-side into the fast right-hander of turn 1 on Llap 19. Redding was on the inside, but Rea cut back to keep the position. On the same lap of the race, Redding pulled off an incredible move around the outside of turn 14 to move into second place after Rea ran wide at turn 13. It meant Razgatlioglu claimed victory ahead of Redding and Rea. Razgatlioglu has 17 podiums in the 2021 campaign which ties him for the record of podiums for a Yamaha rider, level with Ben Spies in 2009. 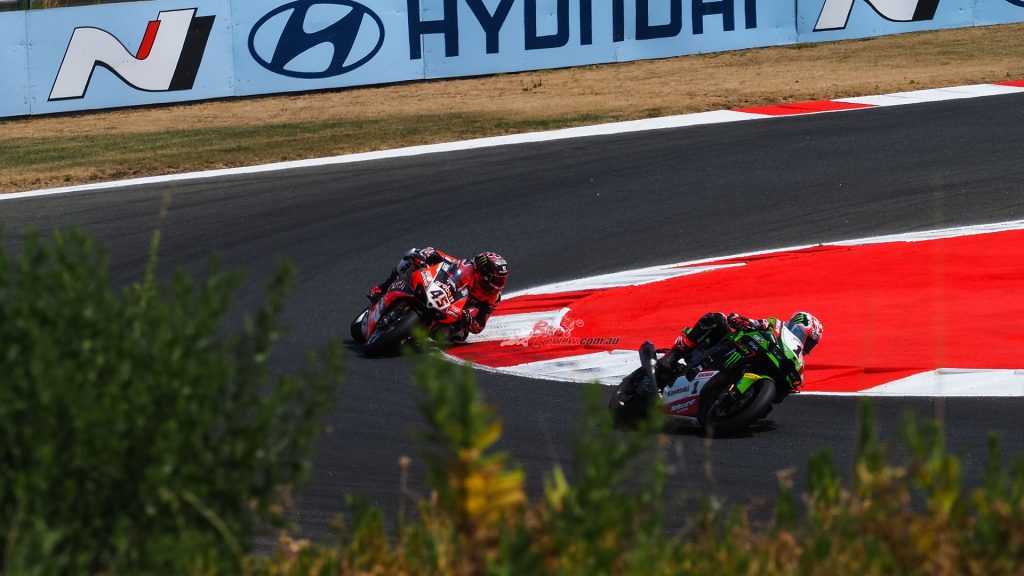 Italian rider Michael Ruben Rinaldi (Aruba.it Racing – Ducati) finished in seventh place in race two after battles throughout the race, with Alvaro Bautista (Team HRC) claiming eighth place as all five manufacturers were represented in the top eight, with Dutch rider Michael van der Mark (BMW Motorrad WorldSBK Team) in ninth place. Van der Mark had crossed the line ahead of Bautista but was penalised for exceeding track limits on the final lap, meaning he came home in ninth. Rookie Axel Bassani (Motocorsa Racing) took another top ten finish as he continues to impress throughout his rookie campaign. 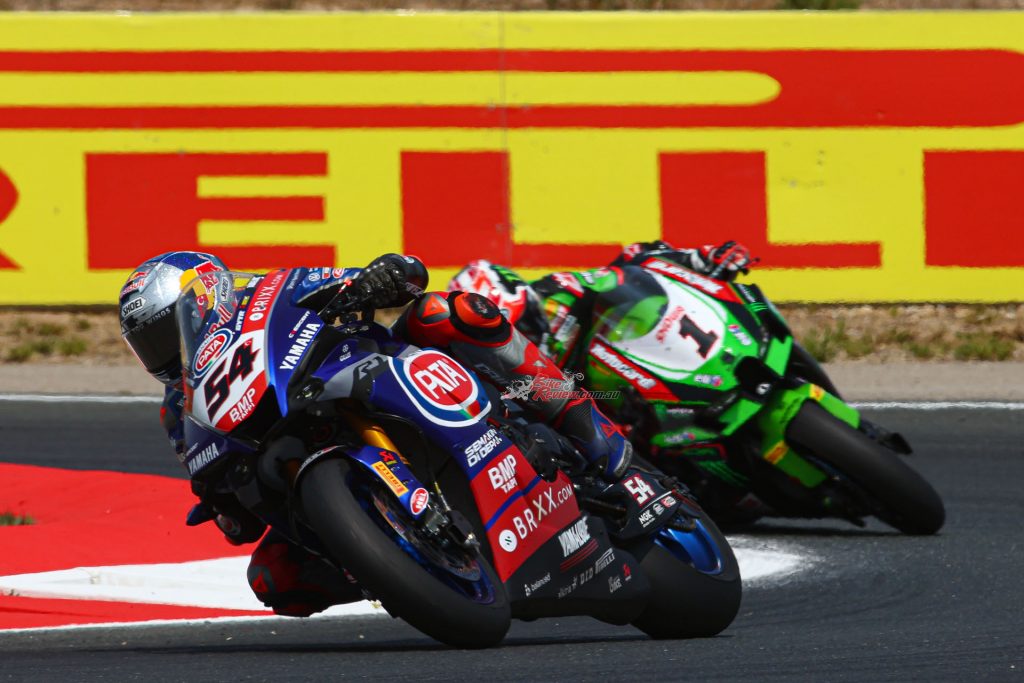 Bassani’s fellow rookie, Tito Rabat (Barni Racing), was 11th place and just 2.4s away from a top ten finish but was unable to overhaul Bassani, while Jonas Folger (Bonovo MGM Action) came home in 12th and took more points from Navarra after not scoring since the Aragon Round that opened the 2021 campaign.

Christophe Ponsson (Gil Motor Sport – Yamaha) took home four points with 13th place ahead of Lucas Mahias (Kawasaki Puccetti Racing) in 14th, who had an eventful race. The Frenchman had to serve a double long lap penalty for an irresponsible manoeuvre on the grid after he had been delayed on the grid ahead of the second qarm-up lap. Leandro Mercado (MIE Racing Honda Team) secured a 15th place finish and one point despite a crash on Lap 3 of the 22-lap race at Turn 13, able to battle back through the field. OUTDO TPR Team Pedercini Racing Jayson Uribe and Loris Cresson were the last of the classified runners in 16th and 17th respectively. 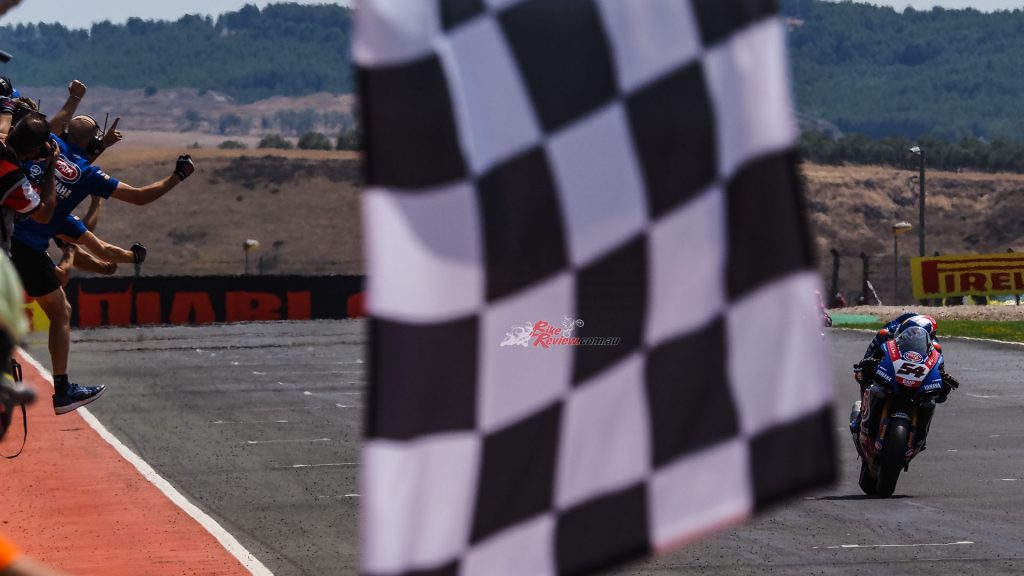 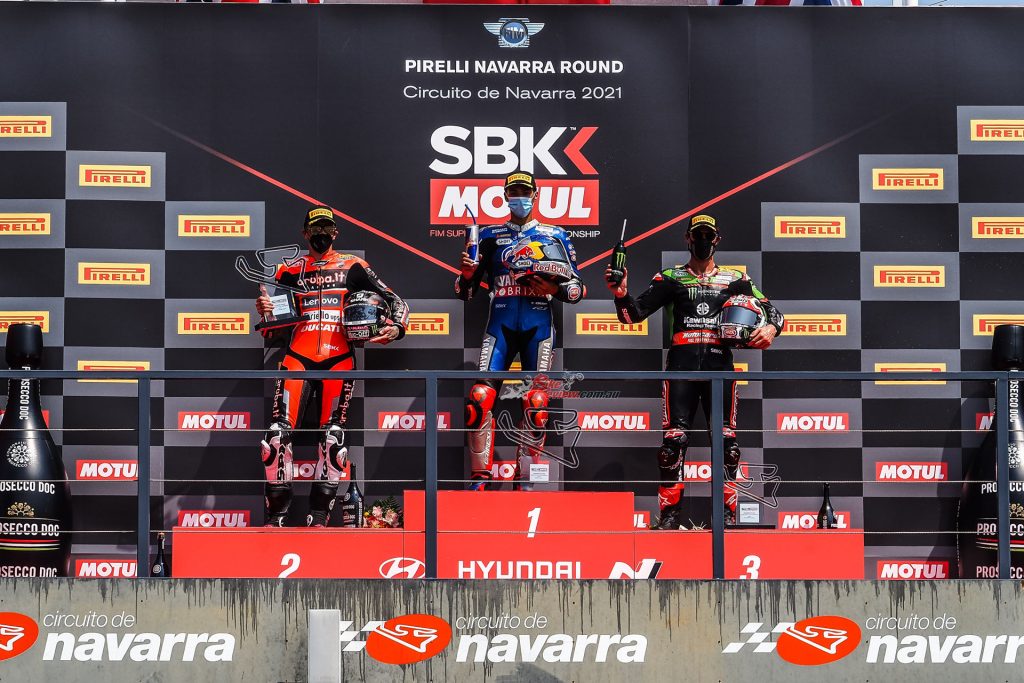 Toprak Razgatlioglu: “I’m just, today, focused on winning. Maybe I am the leader, but I am always focused on each race. I try again the next race, I’m fighting again. This weekend, for me, wasn’t easy but every race I’m fighting for a good position. It was an important win.”