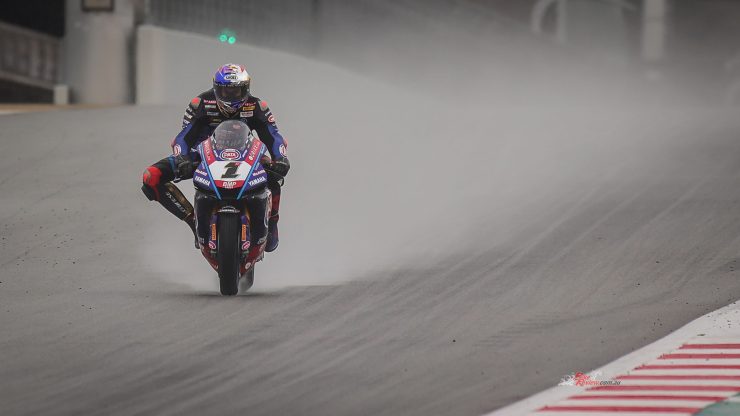 The MOTUL FIM Superbike World Championship continued testing at the Circuit de Barcelona-Catalunya with rain interrupting the second day of action in Spain. Reigning Champion Toprak Razgatlioglu topped the timesheets with the fastest lap of the day coming before the rain fell. 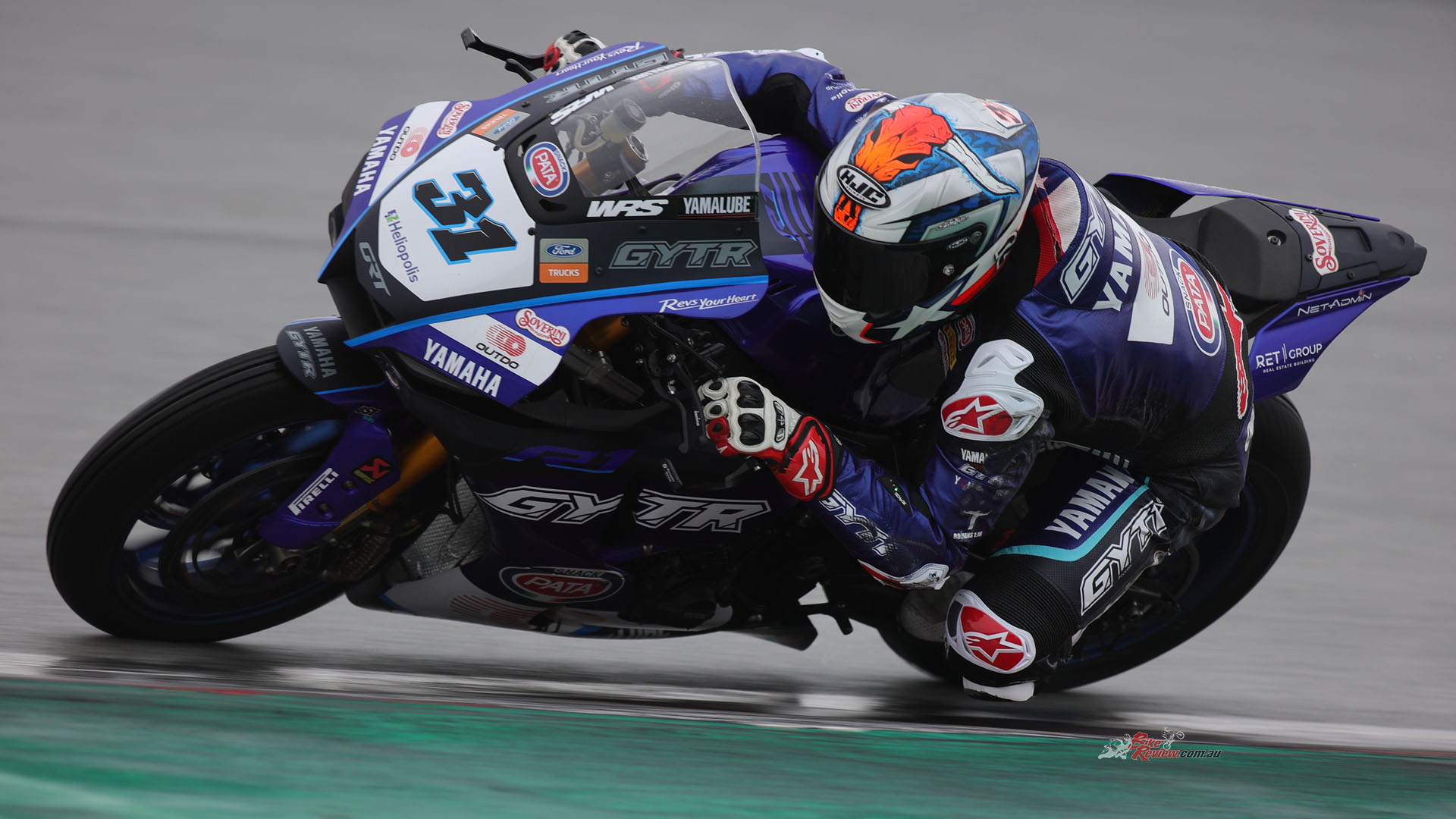 It was a rain-affected Day 2 of testing at Catalunya as all five manufacturers make the top seven.

In a show of what WorldSBK could be like in 2022, five manufacturers finished inside the top seven positions on day two. Razgatlioglu’s fastest time was a 1’40.571s as he completed 51 laps with Yamaha trialling a new exhaust throughout the test as well as continuing to work on their electronics package. Teammate Andrea Locatelli was 11th for the second day as he, like his teammate, worked on Yamaha’s electronics package. 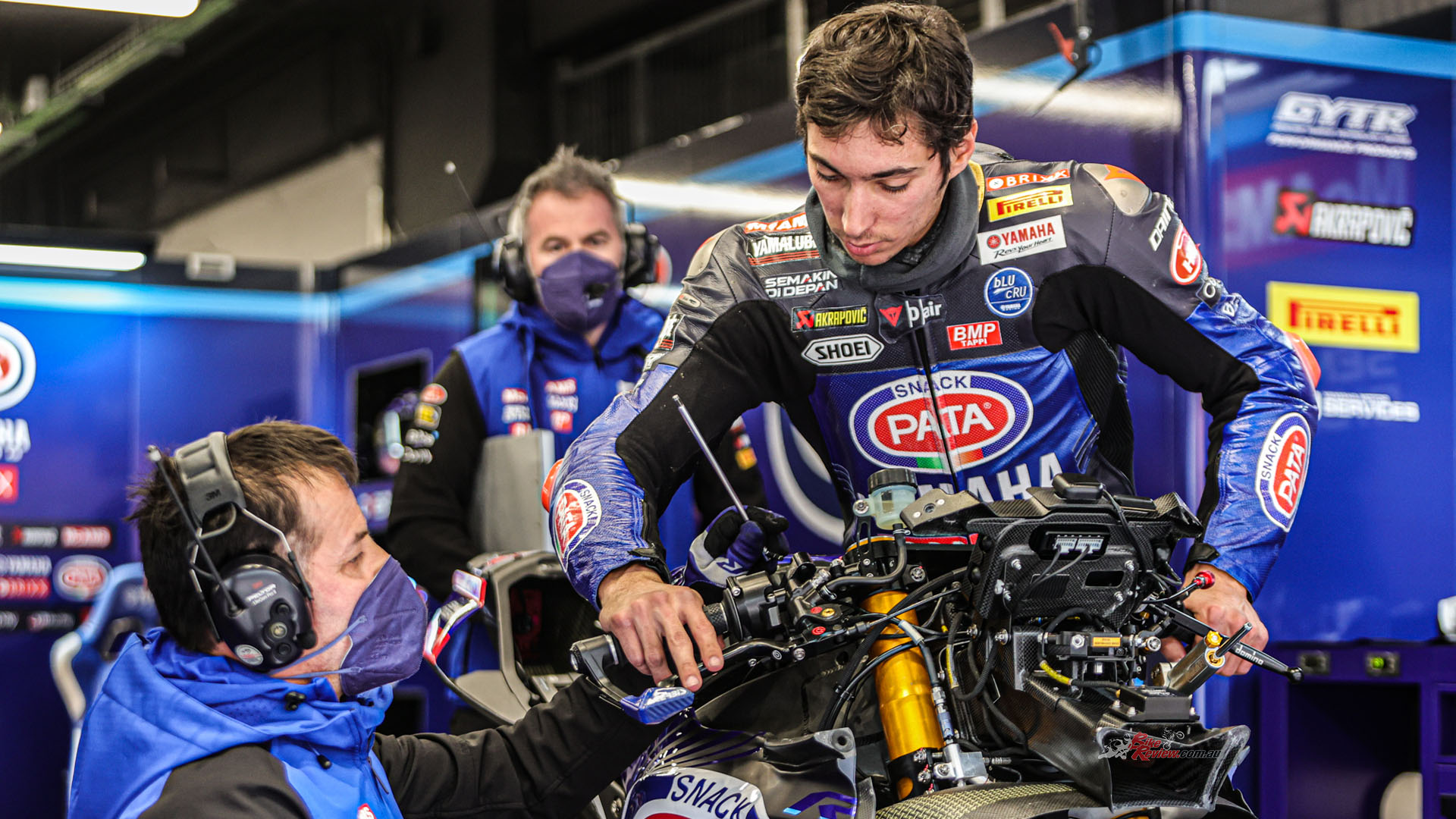 Razgatlioglu’s fastest time was a 1’40.571s as he completed 51 laps with Yamaha trialling a new exhaust throughout the test as well as continuing to work on their electronics package.

Both Razgatlioglu and Locatelli ventured out into the wet on Saturday. The Pata Yamaha team were not the only Yamaha representation in the top five, with Garrett Gerloff (GRT GYTR Yamaha WorldSBK Team) in fifth place. Gerloff was testing in the wet conditions to trial Yamaha’s electronics package. Teammate Kohta Nozane also ventured out into the wet, posting a best time of 1’42.509s.

Alvaro Bautista (Aruba.it Racing – Ducati) put his Panigale V4 R machine into second place as the team looked to focus on a modified swingarm compared to the one seen at Portimao as well as new items inside the front forks. Bautista completed 67 laps and posted a best time of 1’40.952s to claim second spot. Teammate Michael Ruben Rinaldi made it two Ducatis in the top six as he finished sixth with a best time of 1’41.610s. He completed 34 laps on day two, opting not to test in the wet conditions. 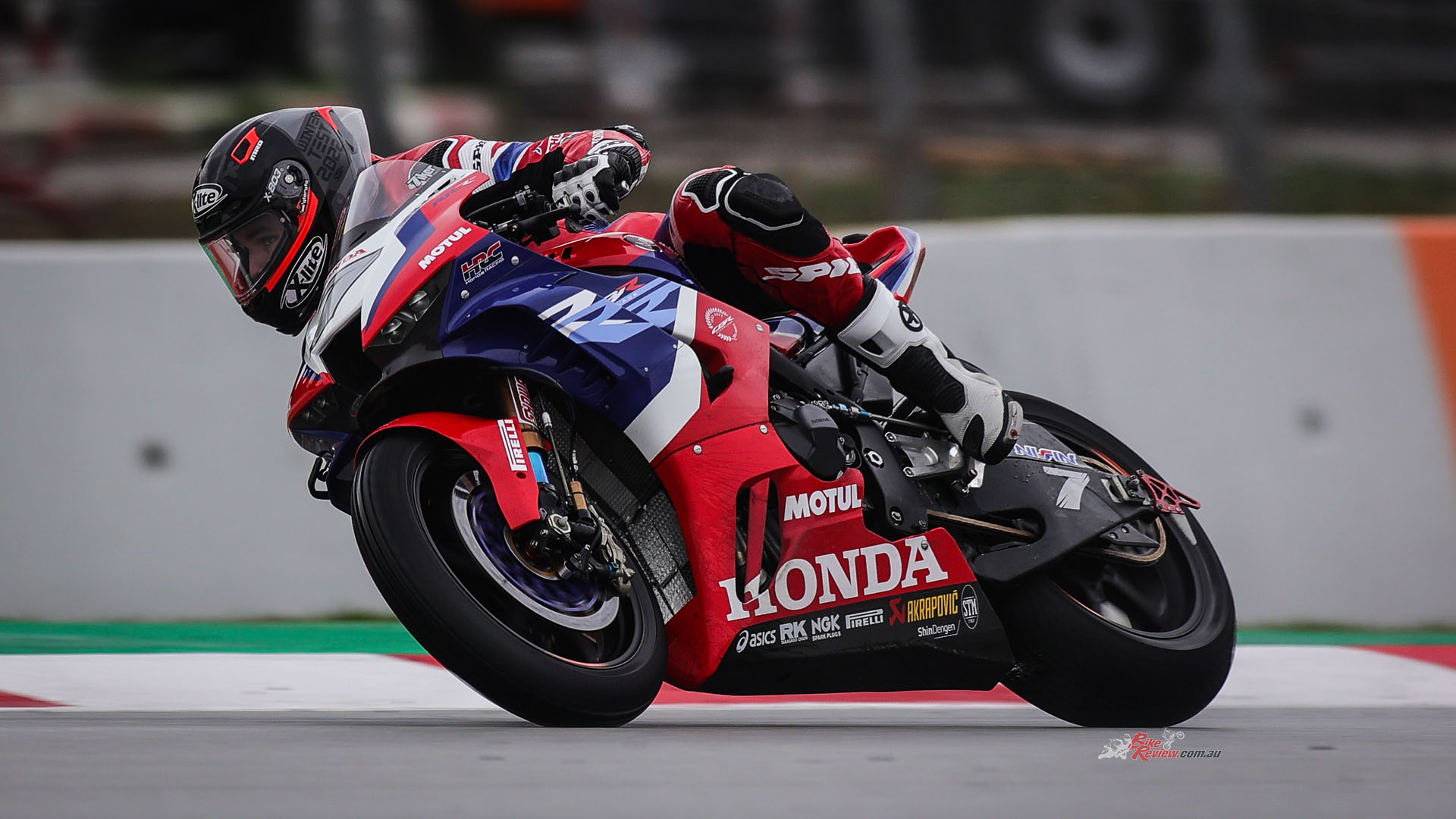 Iker Lecuona claimed third spot in Catalunya with a best time of 1’41.033s and 62 laps completed.

Team HRC showed strong pace on Saturday with two riders in the top eight. Iker Lecuona claimed third spot with a best time of 1’41.033s and 62 laps completed, while Xavi Vierge was eighth after completing 55 laps. Vierge’s day came to an early end on Saturday after he had a highside crash at Turn 12, bringing out the Red Flags for a short period. Vierge was initially taken to the medical centre for a check-up before being transported to hospital with rib injuries, although he was conscious. Honda tested some new double ducts on their brakes on day one of the test to assist with cooling in hotter conditions, while the CBR1000RR-R also has a new exhaust for 2022.

At the team’s home circuit, Kawasaki Racing Team WorldSBK claimed fourth with Jonathan Rea on day two of the two-day test after posting a 1’41.168s and completing 32 laps. Throughout the test, Rea tried the fuel tanks fins used by teammate Alex Lowes as well as trying small components including on the clutch. Lowes finished the day in 12th place, with a best time of 1’41.99s and 36 laps to his name. Both riders opted against testing in the afternoon after the rain fell. 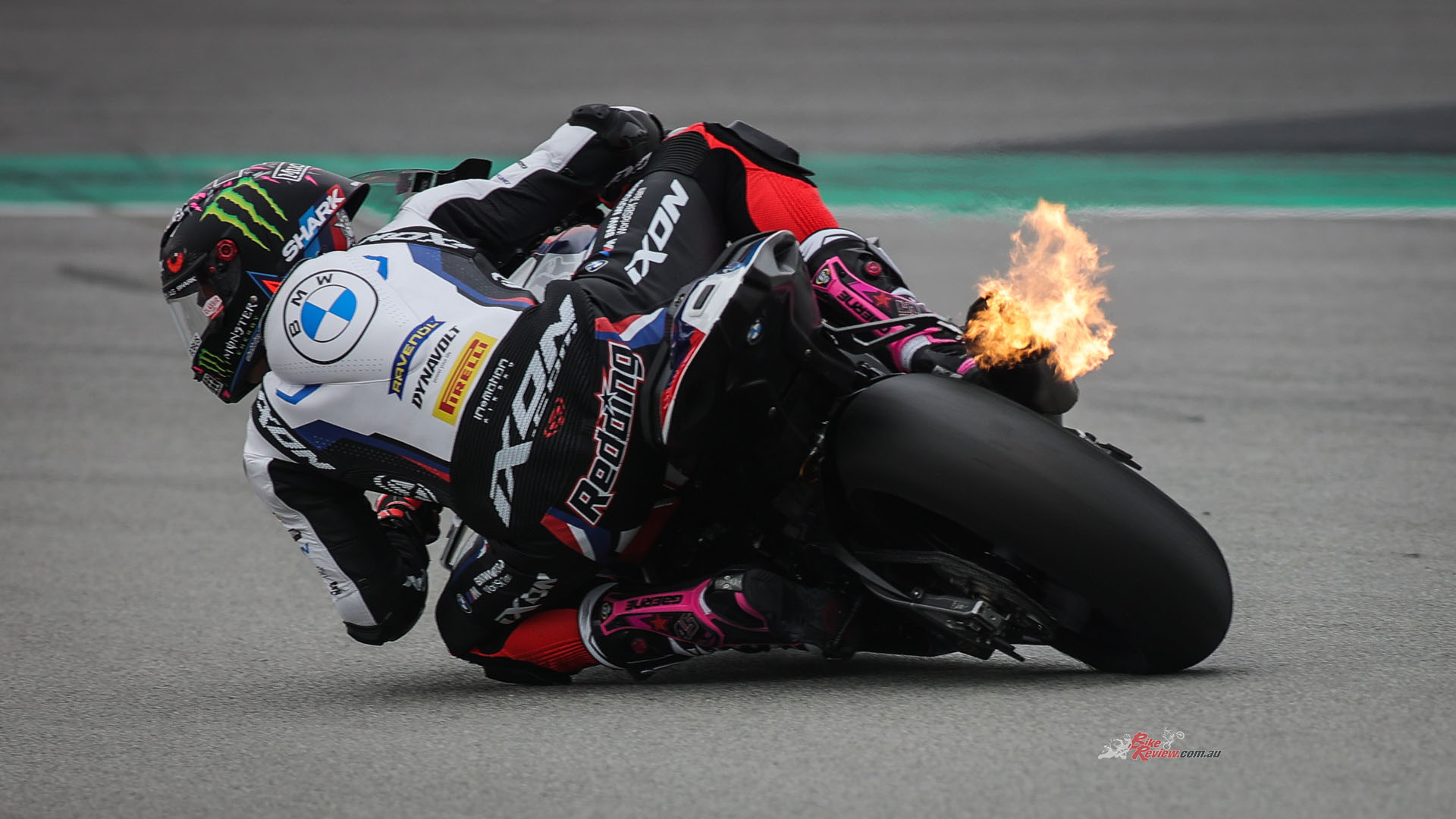 Scott Redding (BMW Motorrad WorldSBK Team) overcame technical issues in the morning at Catalunya to finish in seventh place for the day, racking up 50 laps and posting a best lap time of 1’41.636s.

Scott Redding (BMW Motorrad WorldSBK Team) overcame technical issues in the morning to finish in seventh place for the day, racking up 50 laps and posting a best lap time of 1’41.636s. Redding spent day one working on BMW’s electronics package and was hoping for dry running to keep the momentum heading in the right direction. Despite not staying dry, Redding did test in the wet conditions while stand-in teammate Ilya Mikhalchik finished his day when the rain came. The Ukrainian rider’s best time was a 1’42.763s and he completed 16 laps.

There were two Independent riders who rounded out the top ten on day two in Barcelona. German rookie Philipp Oettl (Team GoEleven) claimed ninth place as he looked to continue evaluating a new exhaust after the team switched to Spark over the winter. Oettl took advantage of the wet conditions in the afternoon to get some wet-weather practice in, having never ridden a WorldSBK machine in wet conditions before. His best time was a 1’41.735s with 55 laps to his name. 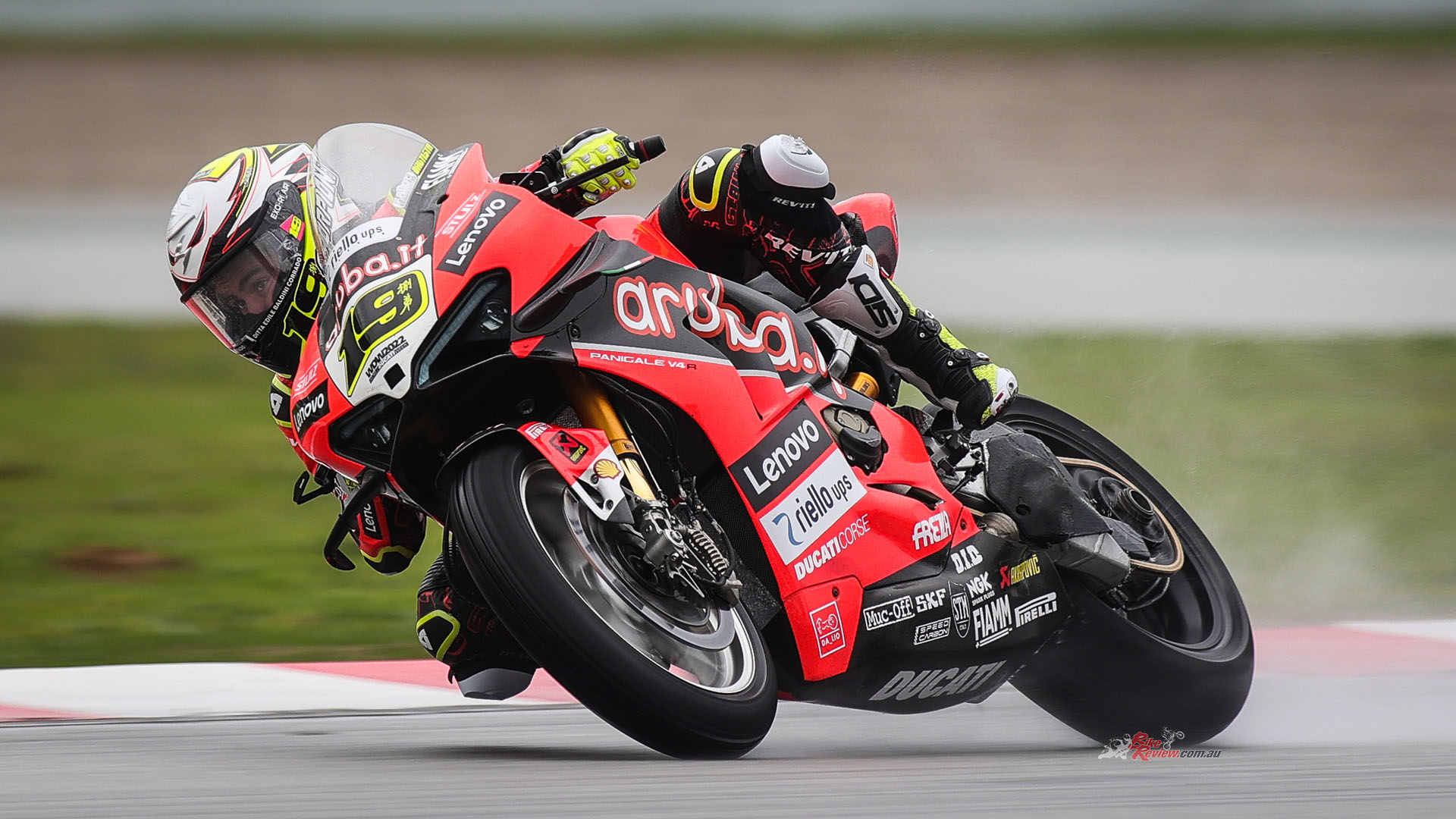 Alvaro Bautista (Aruba.it Racing – Ducati) put his Panigale V4 R machine into second place as the team looked to focus on a modified swingarm compared to the one seen at Portimao.

Lucas Mahias (Kawasaki Puccetti Racing) took a different approach to the afternoon’s running after the rain, with the Frenchman ending his day early. Over the winter, Kawasaki Puccetti switched suspension suppliers to Öhlins, with Mahias continuing to evaluate this change in Catalunya. Mahias posted a best time just 0.009s shy of Oettl while adding 23 laps to his tally.

Bonovo Action BMW duo Eugene Laverty and Loris Baz were 15th and 16th respectively on the second day. Laverty had been working on a change of rider position throughout the test while working on some traction control strategies on day one. The Irishman completed 30 laps on day two, with a best time of 1’43.305s, while Baz was half-a-second down on his teammate as the Frenchman completed 29 laps; neither ventured out onto the track in the wet conditions. 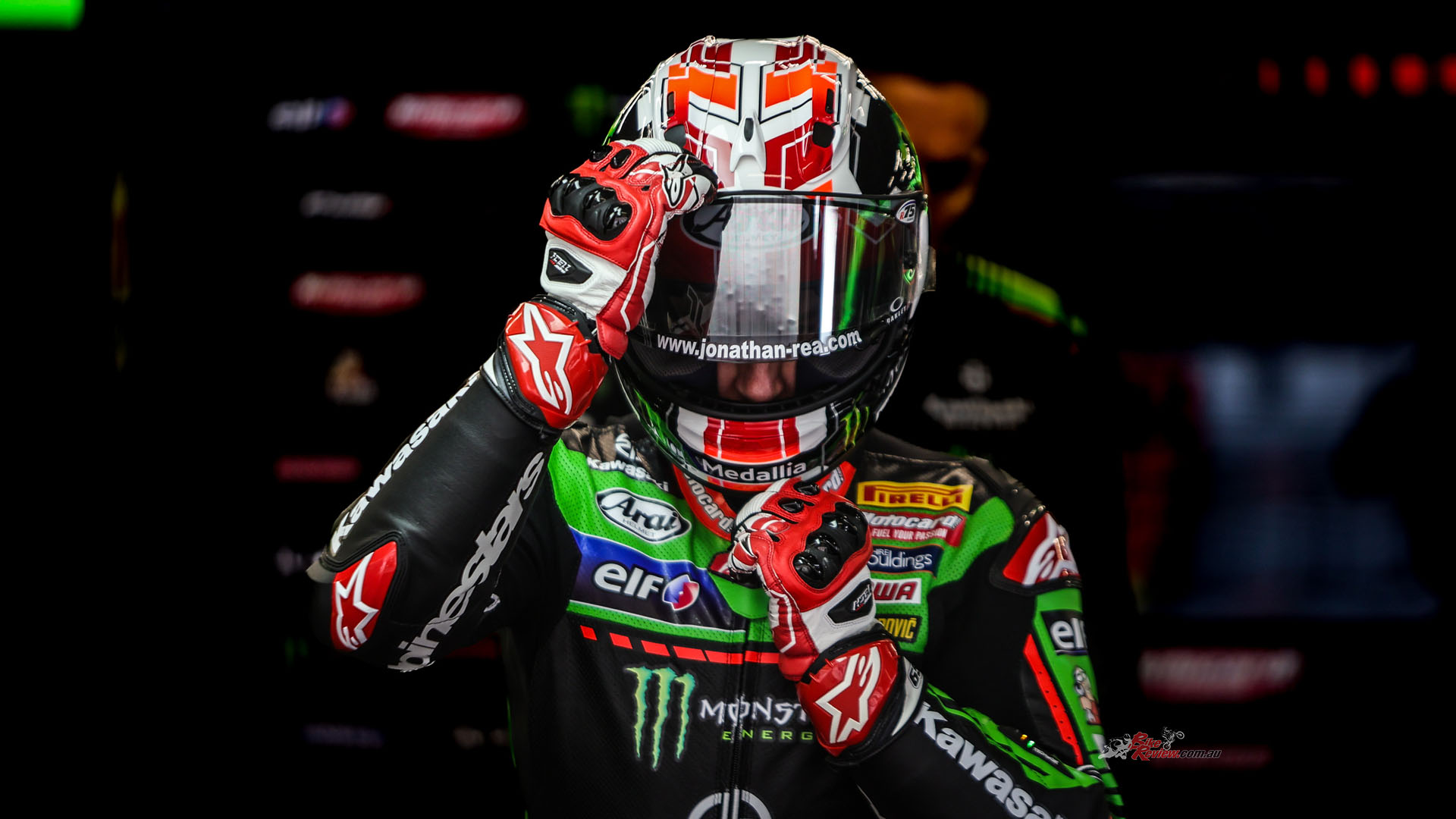 Sammarinese rookie Luca Bernardi (Barni Spark Racing Team) was 17th on day two as he continued to adjust to WorldSBK action. He posted a best time of 1’43.823s, completing 23 laps but not taking to the wet track. His time was a second clear of fellow rookie Oliver König (Orelac Racing VerdNatura) who added 34 laps to his tally; like Bernardi, König did not go out in the rain.

Now entering his second season in WorldSBK, Loris Cresson (TPR Team Pedercini Racing) was 19th on his ZX-10RR. the Belgian rider had a highside crash at Turn 2 on day one in the change of direction but was okay to ride on Saturday, finishing as the penultimate rider in the field. Malaysian rider Hafizh Syahrin (MIE Racing Honda Team) was last in the WorldSBK classification, completing 49 laps with a best time of 1’45.539s. 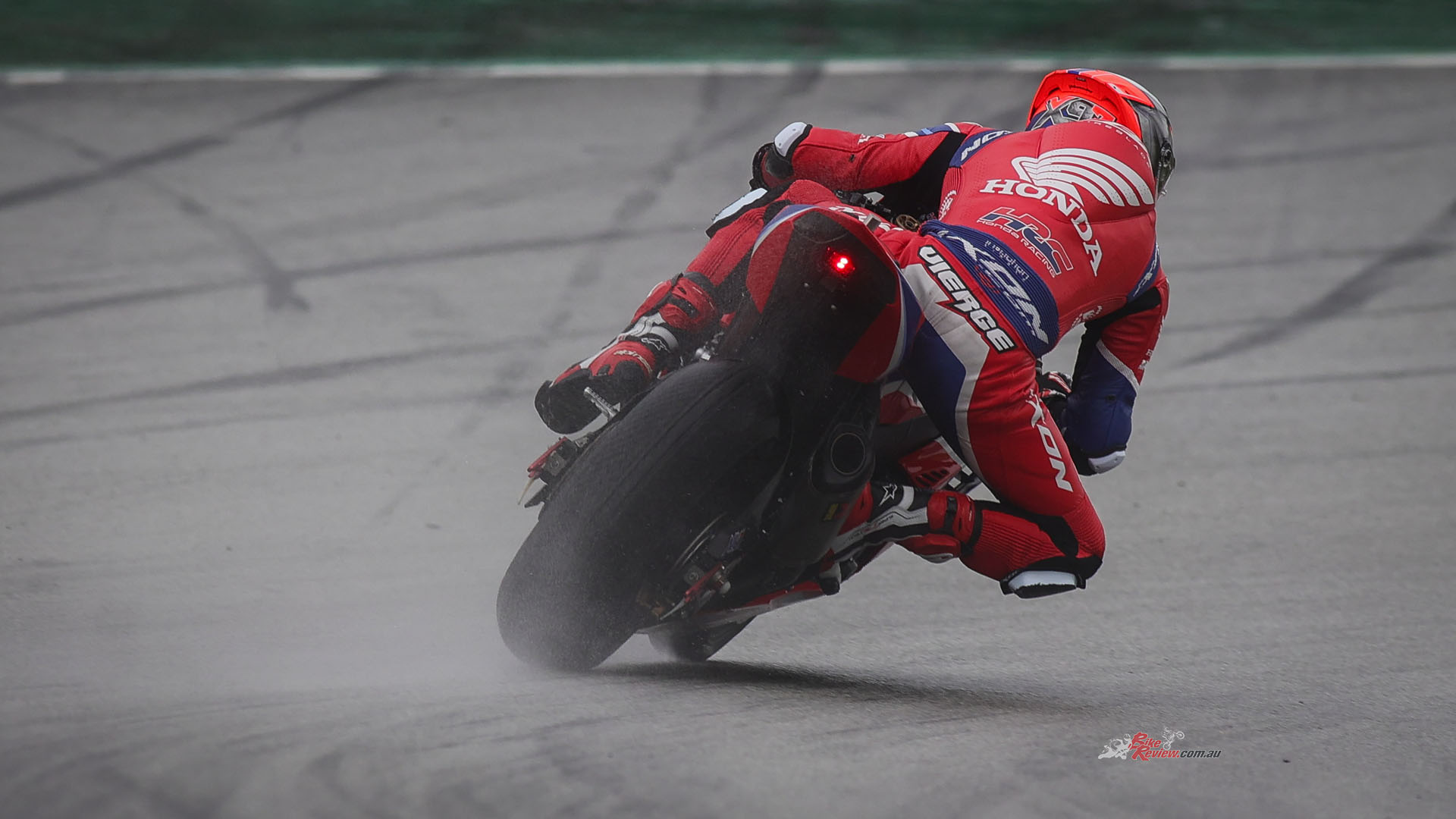 The countdown is on for the beginning of the WSBK season as they head to Aragon on the 23rd of May.

WorldSSP
Nicolo Bulega (Aruba.it Racing WorldSSP Team) continued his form of lapping under existing race lap records throughout testing as he sent the benchmark in WorldSSP on day two. His best time was a 1’45.110s, faster than both Cresson and Syahrin, as he added 38 laps to his tally. He was the only WorldSSP rider to hit the track in the wet conditions, with Raffaele De Rosa (Ducati Orelac Racing VerdNatura) and Oli Bayliss (Barni Spark Racing Team) opting to not test in the afternoon. De Rosa’s best time was a 1’46.971s, almost two seconds back from Bulega, while Bayliss posted a 1’47.253s as his best time.