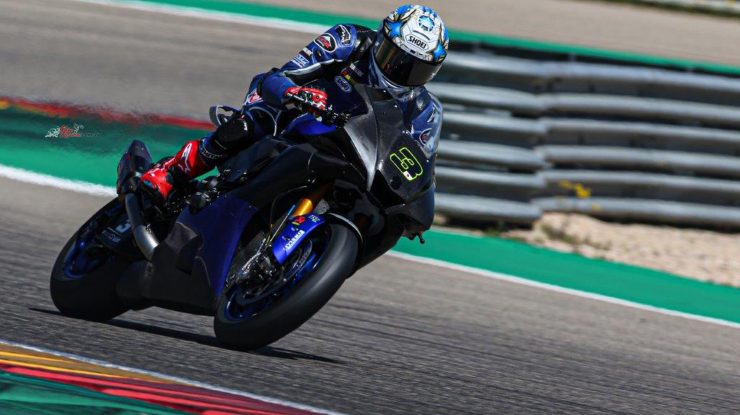 The WSBK Teams and riders headed west from the Circuit de Barcelona-Catalunya to MotorLand Aragon for two more days of vital off-season action ahead of the MOTUL FIM Superbike World Championship season, with Chaz Davies topping the timesheets on the first day. 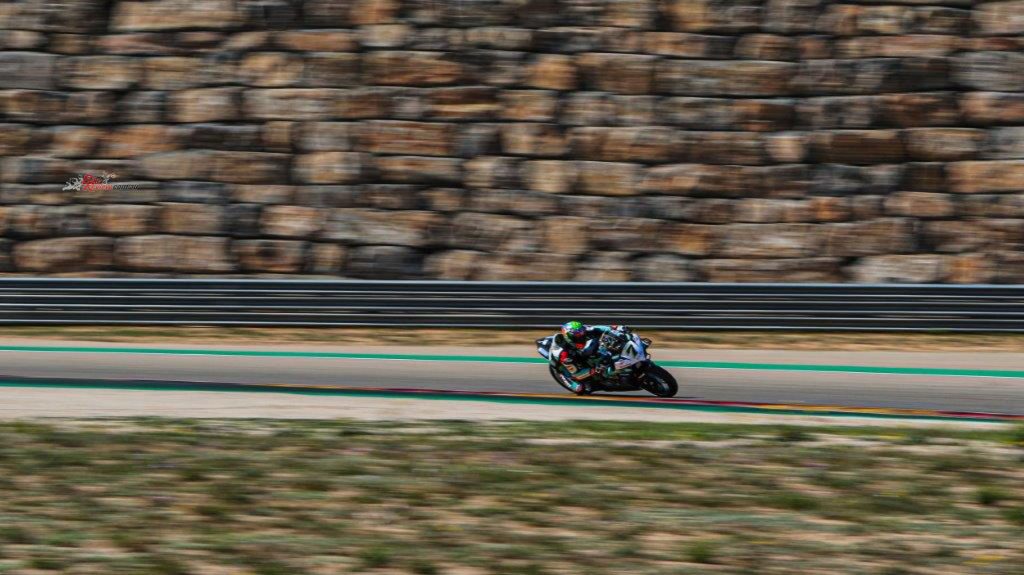 Chaz Davies topped the time charts for day one of the Aragon test to much excitement of from the GoEleven team.

The day’s running got off to a slow start following rain the day before and cold track conditions in the morning. Davies, who moved to Team GoEleven for the 2021 campaign, posted a time of 1’49.878s in the afternoon session of day one – working on the chassis balance of his Ducati Panigale V4 R as well as on electronic settings while using qualifying tyres. Michael Ruben Rinaldi  was in second place as he also continues to adjust to his new team after switching from Team GoEleven to the Aruba.It Racing – Ducati outfit. Rinaldi posted a time of 1’49.947s, completing 70 laps, as he worked on his bike setup and chassis.

Scott Redding put in a late lap to claim third place on the opening day after focusing on some electronic changes as well as hoping to work on some long runs throughout the two-day test. Redding completed 64 laps throughout the first of two days of action at MotorLand Aragon as he looks to build up a title charge in 2021. 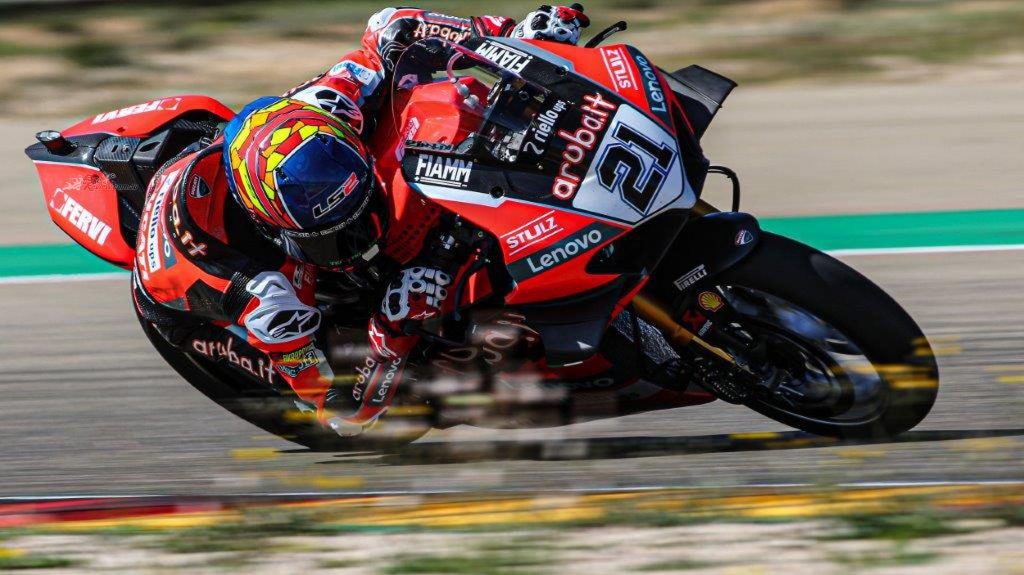 The Aruba.It Ducatis were looking extremely fast out there as well, posting some impressive lap times.

Christophe Ponsson took to the track with his team’s striking new yellow and blue livery unveiled on his Yamaha YZF R1 ahead of full-time WorldSBK campaign after sporadic appearances in 2020. Ponsson, like Locatelli, avoided the cooler morning conditions altogether and only took to the track in the afternoon, and was working with a new seat to try and improve his position on the bike to reduce movement.

Rounding out the WorldSBK field was Yamaha’s rider coach and test rider Niccolo Canepa with the Italian rider standing in for Toprak Razgatlioglu while the Turkish star completes his self-isolation period. Canepa completed 36 laps throughout the day as he completed some fitness analysis on himself after a recent crash while also undertaking some fundamental testing work for Yamaha.

Day two saw Scott Redding of Aruba.It Racing – Ducati, topped Tuesday’s (Day Two) times after a flurry of late laps in the afternoon session. Track and ambient conditions were slightly warmer than day one with track temperatures reaching above 40 degrees celsius throughout the afternoon. 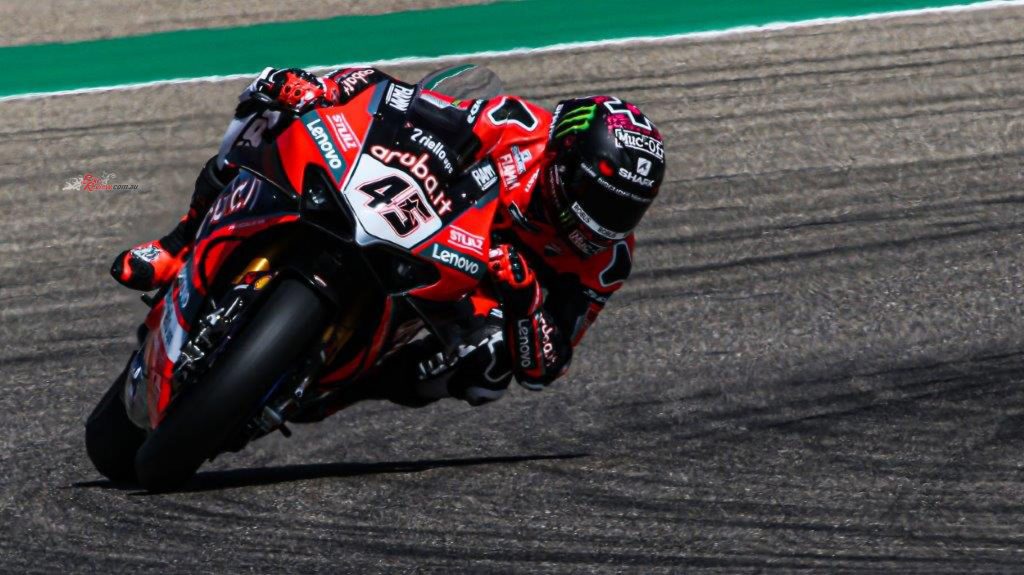 Redding’s lap time of 1’48.780s was only 0.013s outside the Superpole record set by Jonathan Rea at last year’s Teruel Round. He finished half-a-second clear of teammate Michael Ruben Rinaldi as the duo battled it out for top spot; Redding laying down an impressive marker as preparations for the season gear up. Redding had wanted to focus on improving grip from his Ducati Panigale V4 R while Rinaldi had been trying to improve his exit of corners.

Garrett Gerloff finished third on the second day as he continues to impress heading into his second WorldSBK campaign. The three-time podium finisher spent yesterday working on race pace and had a couple of shocks to try out throughout today as he finished the test as the fastest Yamaha rider and added 73 laps to his tally for testing. 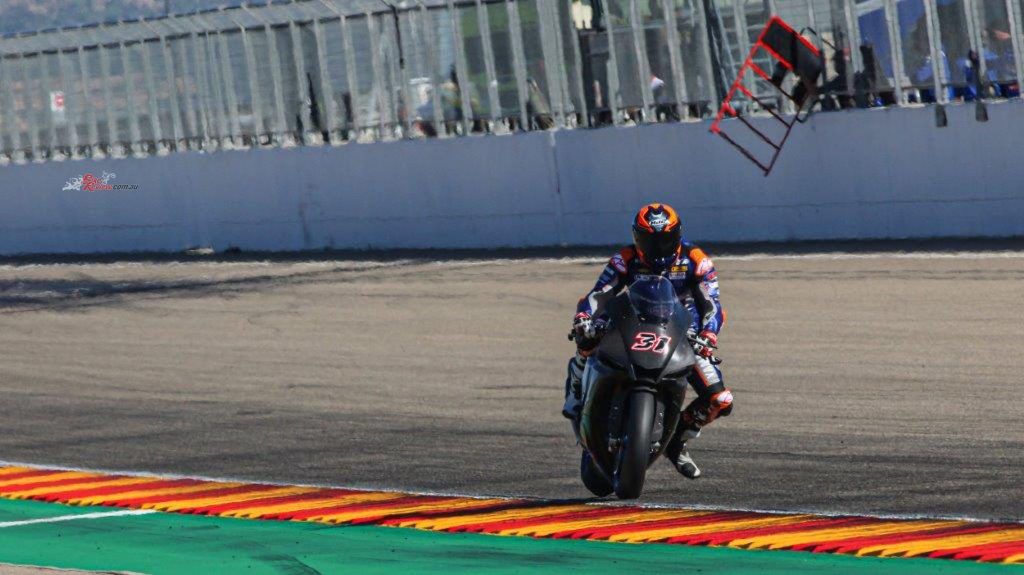 The teams are all rushing to get their bike development finished, ready for a close battle for the 2021 title.

Chaz Davies continued his impressive form throughout the two-day MotorLand Aragon test with fourth place for his new team as he tried out two new components on his Ducati: new callipers from Brembo and a new shock from Öhlins. Rinaldi, Redding, Gerloff and Davies were the only riders to lap under 1’50s at MotorLand Aragon on the second day of testing. The British rider also was working on the balance of his chassis throughout the day as well as improving the rear grip through long corners as he completed 75 laps for the day.

Reigning WorldSSP Champion Andrea Locatelli set the fifth best lap time on day two after a late run as he was looking to take another step forward while also working on the balance of his Yamaha YZF R1 as well as looking to extract the most from his machine. The Italian rookie did have a small crash at turn 15 in the morning session but was able to take his bike back to the pitlane.