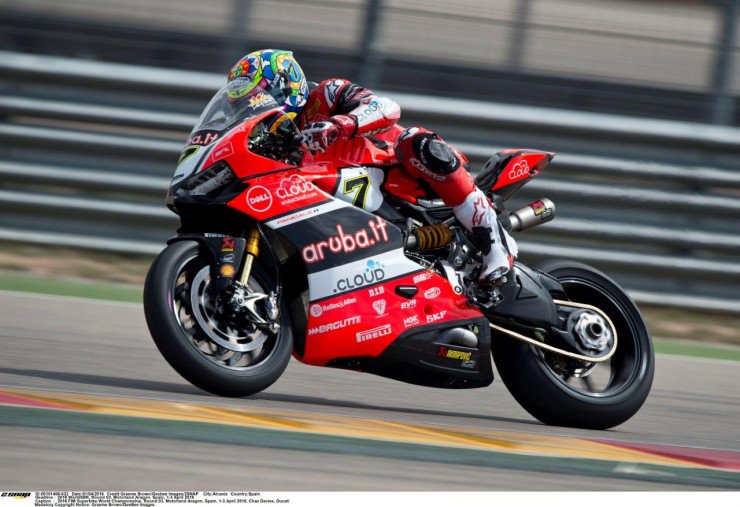 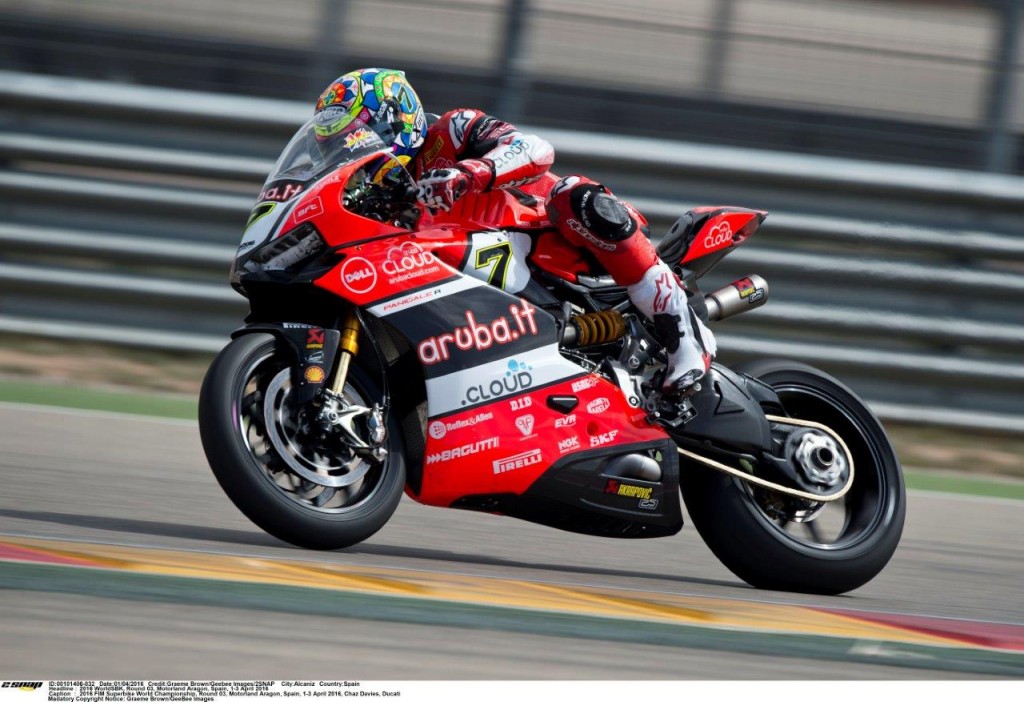 Race one report: First Ducati win of the year as Kawasaki dominion ends in Aragón

With clear blue skies and warmer temperatures, the stage was set for a WorldSBK showdown as Kawasaki’s Tom Sykes got the best getaway from pole as teammate Jonathan Rea also shot away from fifth on the grid, with the reigning Champion up into P3 behind Guintoli on the chase as Sykes lead them away. 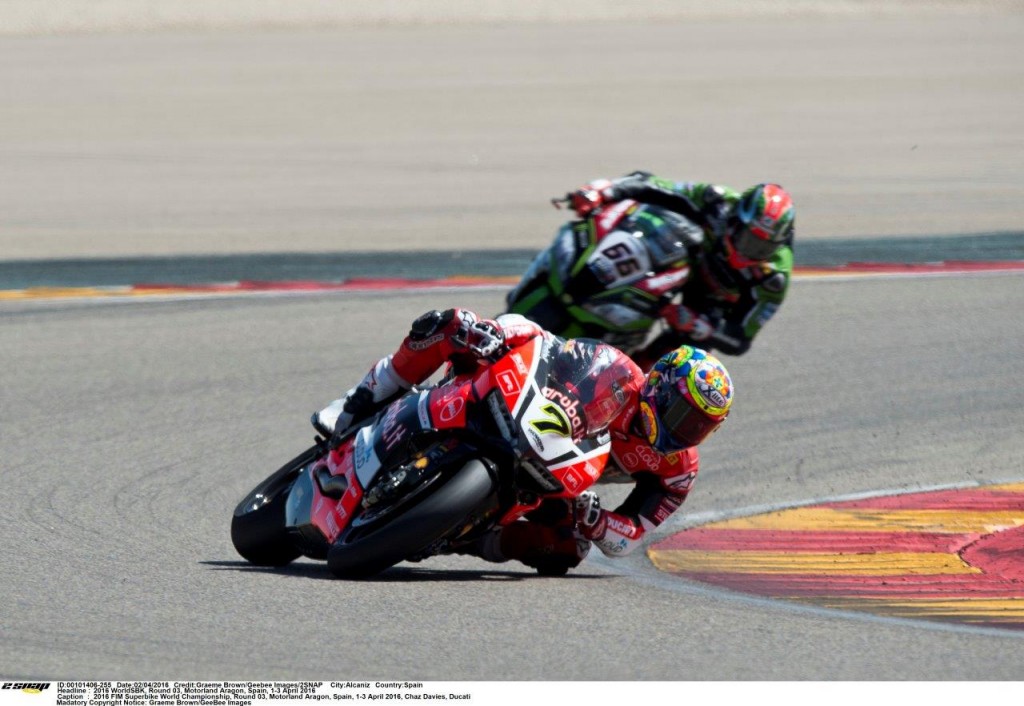 The two Ducatis of Chaz Davies and Davide Giugliano set upon Rea as a the three battled over third and Sylvain Giuntoli and Sykes pulled away.   Davies soon pulled the gap back once free of the fight and with 15 laps remaining took the lead from Sykes, intent on taking another win in Aragón and adding to his tally as the most successful WorldSBK rider at MotorLand.

Yamaha pairing Guintoli and Alex Lowes had mixed fortunes on the getaway, with Lowes dropping down the order after a difficult start and finding himself fighting back from just outside the top ten. Teammate Guintoli, after initially challenging race leader Sykes with impressive pace, then started to struggle slightly and dropped back slightly to 9th as Yamaha look to keep improving the all new YZF R1. Lowes had an impressive comeback to P8 at the chequered flag, keeping both bikes with a good haul of points.

Michael van der Mark and Nicky Hayden, who started 10th and 11th respectively (after a crash for van der Mark in Superpole 2) led to Hayden needing to take avoiding action, both got away well and were in the thick of the action. Van der Mark sadly suffered a crash at Turn 5 with around 15 laps to go, leaving Hayden to go on the attack as he chased down the Yamaha of Guintoli and Ducati of Giugliano, with the American coming home in P6 at the flag.

MV Agusta rider Leon Camier suffered a technical problem to end his first race of the weekend at MotorLand early. Aprilia duo Lorenzo Savadori and Alex De Angelis took their IodaRacing machines to two more points finishes in P10 and P11 respectively as the team look to keep improving in their first year in WorldSBK. De Angelis is recovering from recent surgery and will surely be encouraged by a good result in race one. 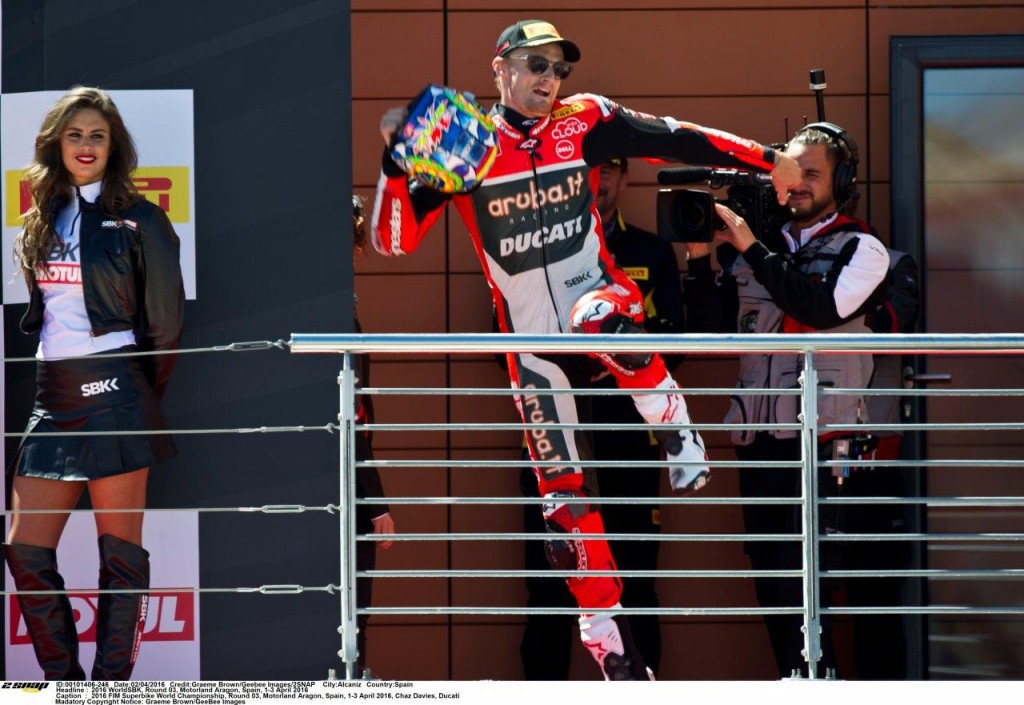 Aruba.it Racing – Ducati rider Chaz Davies took another incredible win at MotorLand Aragón in race two, crossing the line 6.4 seconds clear of the nearest bike on track after another sublime ride. Kawasaki riders Tom Sykes and Jonathan Rea completed the podium in Spain after being locked in another head to head.

Home rider Xavi Forés took his Barni Racing Team Panigale R into fourth once again, equaling his best career result, gained in race one at MotorLand.  Compatriot Jordi Torres achieved his best result of the year, crossing the line in fifth ahead of the Ducati of Giugliano, and proving to be the lead BMW by an impressive margin. 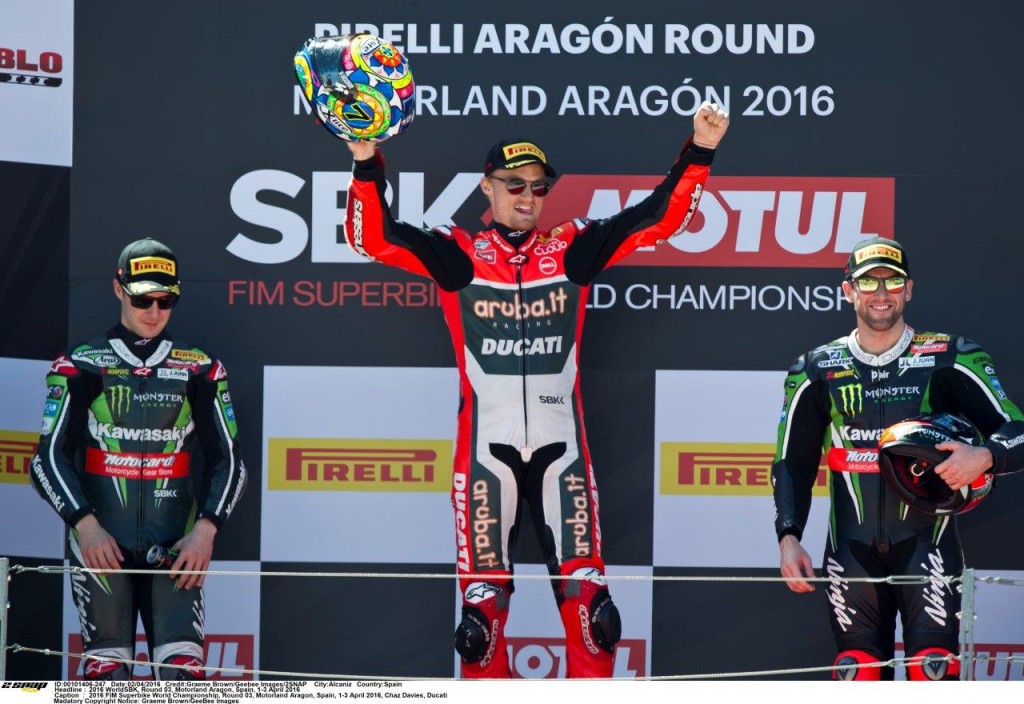 Giugliano recovered from a small incident on track to hunt down Honda rider Michael van der Mark and re-pass him, putting himself into P6 by the end of the race. Van der Mark, after an uncharacteristically difficult Saturday, kept his Honda in the mix in race two to grab another great haul of points, crossing the line in seventh after a good start from 11th on the grid, unable to hold off Torres and Giugliano by the end of the race.

Van der Mark’s teammate Nicky Hayden dropped down through the order with Yamaha’s Alex Lowes after an incident on track, with the 2006 MotoGP world champion out after suffering a mechanical problem late in the race.

Yamaha duo Sylvain Guintoli and Alex Lowes, after starting from the front row, finished the race in P9 and P10 respectively after a difficult start to the race, with the new YZF R1 not yet able to match its one-lap pace over race distance.

Aprilia rider Alex DeAngelis came home in 8th to make great progress after race one, with the San Marino rider recovering from recent surgery and surely happy with another top ten result. MV Agusta’s Leon Camier finished just outside the points, with the Italian factory hoping to get back up the grid when WorldSBK gets to Assen for the next round. 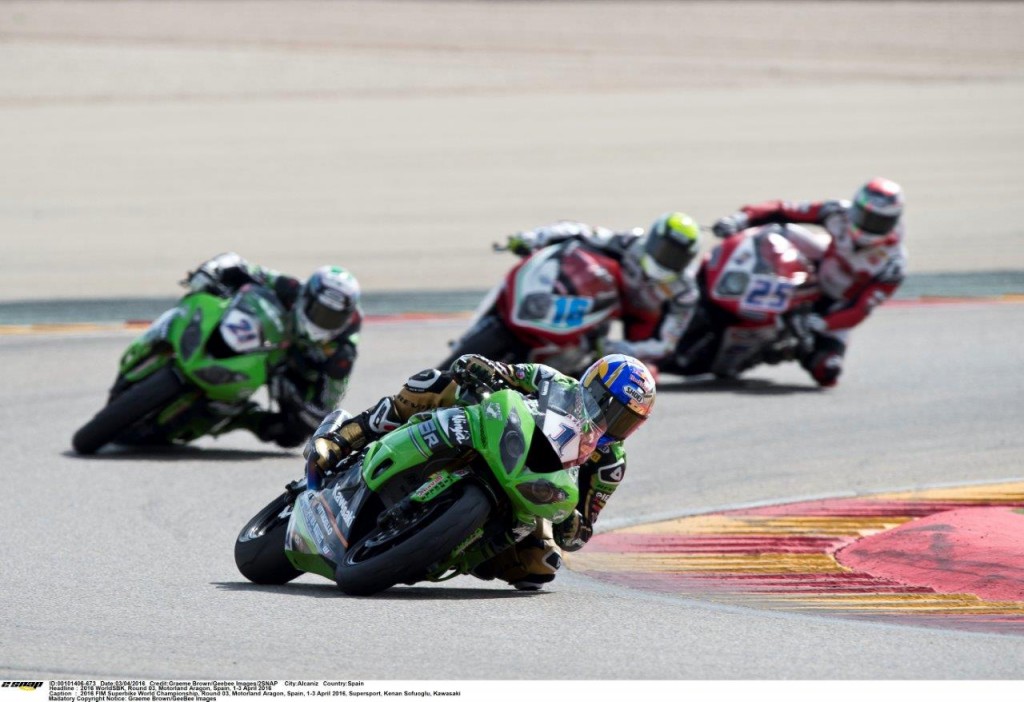 World Supersport:  ESS riders get in on the action and home hero hits the podium

Reigning Champion Kenan Sofuoglu took a commanding victory at MotorLand as the FIM Europe Supersport Cup riders joined the WorldSSP grid for the first European race of the season, with seven nationalities in the first eight positions as the flag dropped at the end of the race. Turkish Puccetti rider Sofuoglu cut the Championship lead of his Swiss teammate Randy Krummenacher as fellow contender Jules Cluzel struggled slightly to find pace, crossing the line in P4 just behind home rider Nico Terol, who gained his first podium in WorldSSP.

Pole sitter Kenan Sofuoglu got away in the lead, with Honda rider PJ Jacobsen his closest immediate challenger after a great start for the American. He then attacked for the lead after Sofuoglu ran wide, unfortunately losing the front and sliding early out of the race.

A high rate of attrition in the first few laps saw Roberto Rolfo first forced to leave his 11th place grid spot before the getaway, before a multi-rider incident at Turn 1 saw debris litter the run off area. Wagner, Licciardi, Rea and Orellana all found themselves suffering the same fate as Jacobsen. MV Agusta rider Lorenzo Zanetti was then unfortunately forced to pull off the circuit with a technical problem, as Sofuoglu began to pull away in the lead ahead of Cluzel, Krummenacher and Baldolini. The number 25 of the Italian then pulled off the racing line along the start-finish straight as a plume of smoke from the back of his MV Agusta announced an early end to his race.

San Carlo Team Italia riders Bassani and Zaccone were the key players from the new FIM Europe Supersport Class as they challenged the regulars in the top 5, with Schmidt Racing’s local rider and former 125 Champion Nico Terol getting past both and able to get himself into podium contention before pulling away to find a margin to breathe, crossing the line for his first rostrum of the year.

Malaysian rider Zulfahmi Khairuddin, who had begun the race from 17th after a problem with the foot rest on his Orelac Racing VerdNatura machine in Tissot-Superpole, made progress up into the top 5 before finally crossing the line in 8th for a great haul of points, with teammate Nacho Calero also coming home in the points.

Randy Krummenacher retains his points lead in WorldSSP after MotorLand, with the Swiss rider adding another 20 and forcing teammate Sofuoglu to play catch up. The action will get underway again in two weeks in Assen as Cluzel and Jacobsen look to bounce back and Sofuoglu looks to keep cutting that gap. 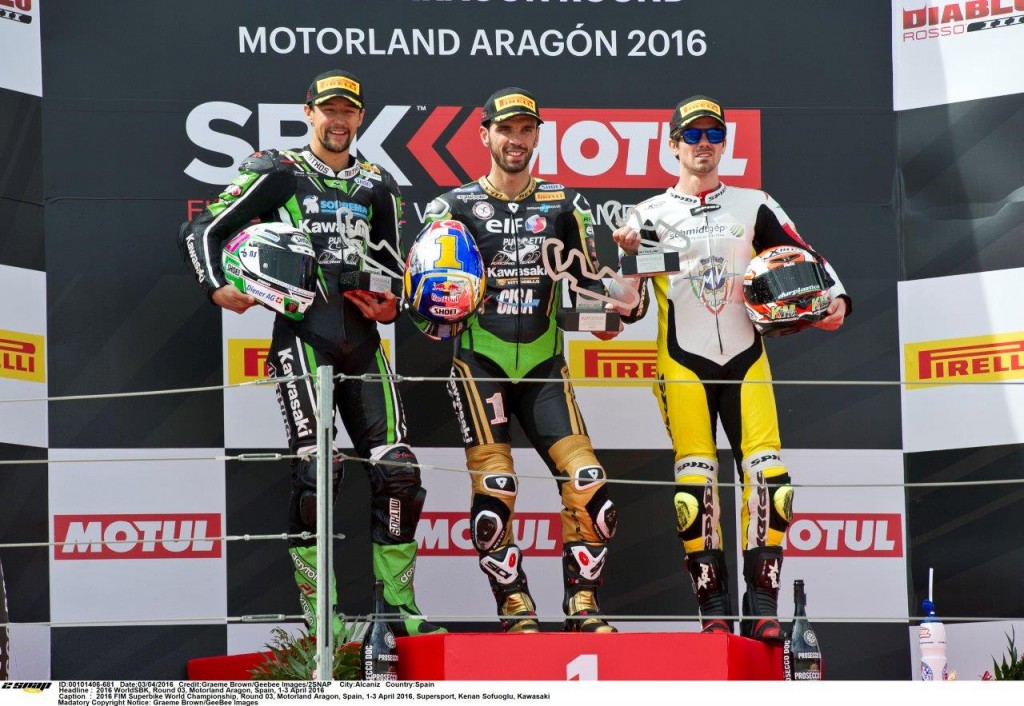