Kawasaki have updated the previous Ninja 650L with an all-new model for 2017. Lighter, much more stylish and learner friendly it has a trellis frame, ABS brakes, Ninja styling and a torquey parallel twin-cylinder four-stroke tuned for maximum torque from low rpm and a linear power delivery through to the 9500rpm redline. 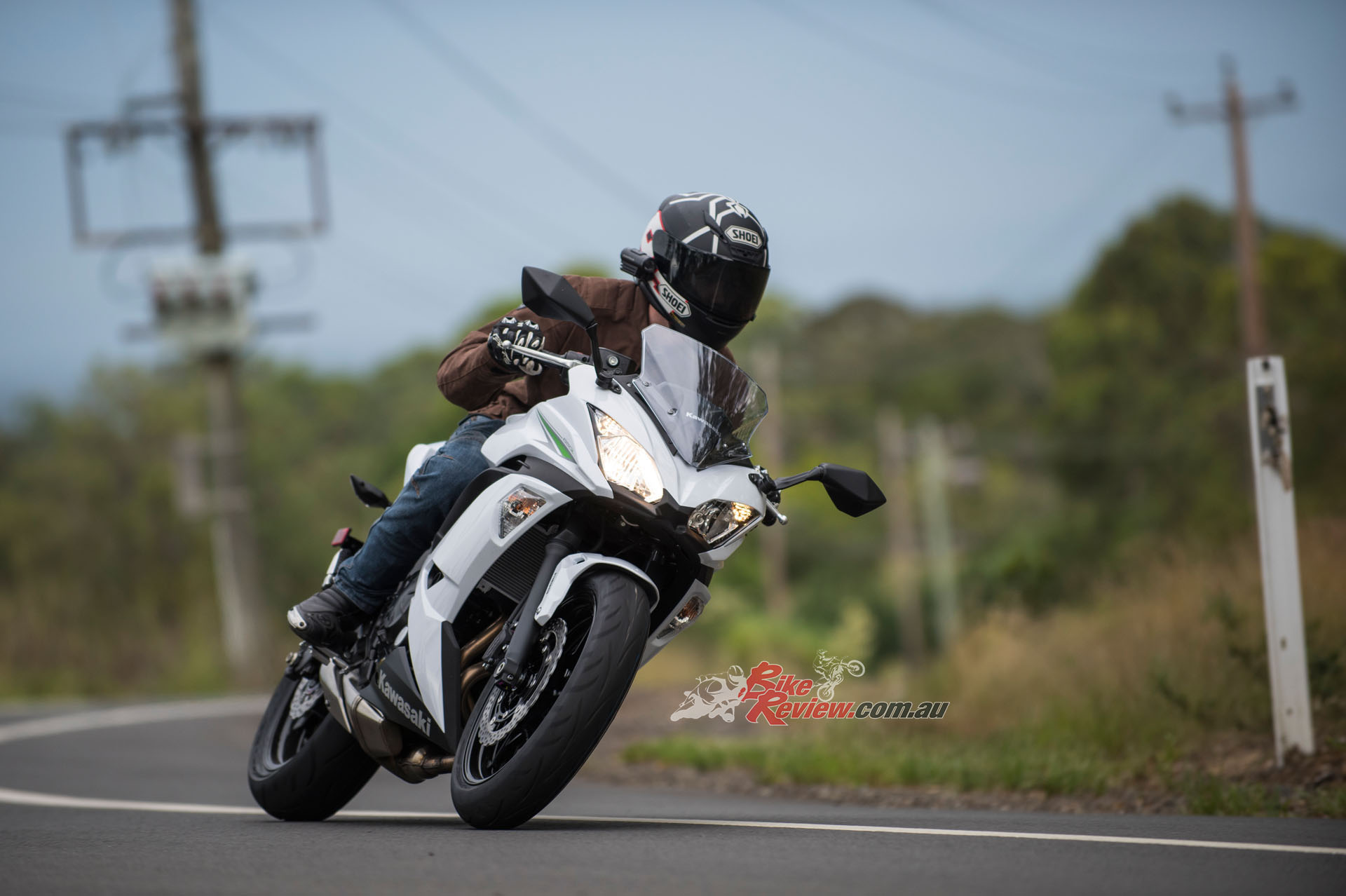 The new Ninja 650L is a great handling bike that is well balanced, confidence-inspiring and sure-footed. The size of the bike makes it a fantastic mid-sized option and it is available in a full power version.

We recently spent a full day testing the Ninja at the Australian press launch held in the Wiseman’s Ferry, NSW region and had the opportunity to test the bikes in a range of conditions from suburbia to open country roads, wet and dry, plus some great Twisties as well. I came away impressed and found that not only is the Ninja 650L a great LAMS machine it would also rate as a good all-rounder for the more experienced among us.

We may have featured the Z650L on BikeReview.com.au first, but it was the Ninja 650L which I spent the first half of my day on at the launch, and to be honest it was the pick of the two bikes for me. 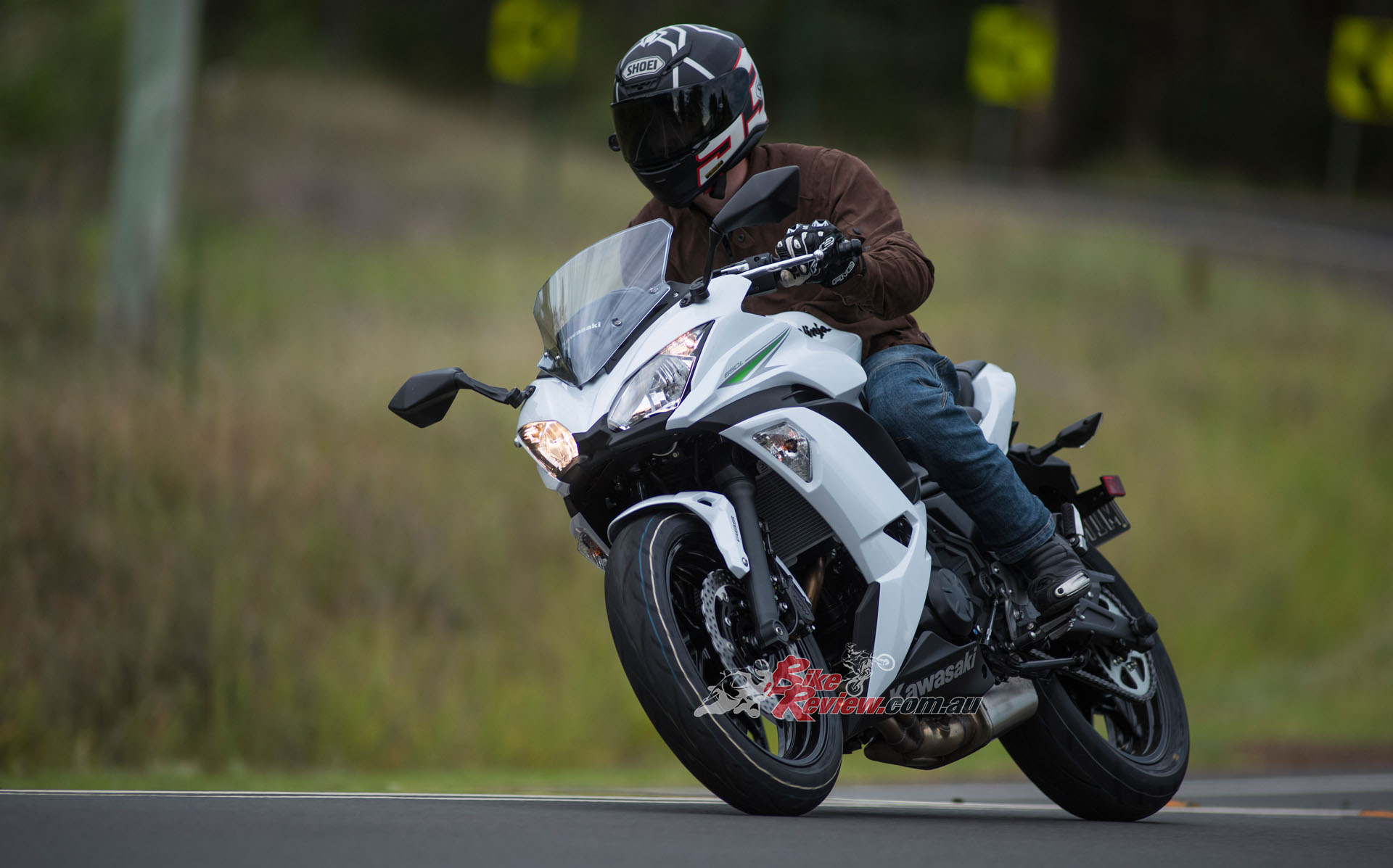 The Ninja 650L features ABS, slipper clutch and an all-new frame and swingarm saving a huge amount of weight over the previous model. This package has made the bike a really sweet handler.

While the spec’s suggest there’s very little separating the two, I found the Ninja 650L far more planted, steadier on its side and more comfortable. I do own a sportsbike, so that may have some small bearing on this opinion. I’m not going to say it was the better of the two, but it suited my riding style and preferences more closely.

Styling is spot on, harkening to the ZX-10R and ZX-6R, with the KRT Edition an irresistible option if I was buying. An adjustable screen, adjustable levers, integrated indicators and simple dash all delivered above my expectations. 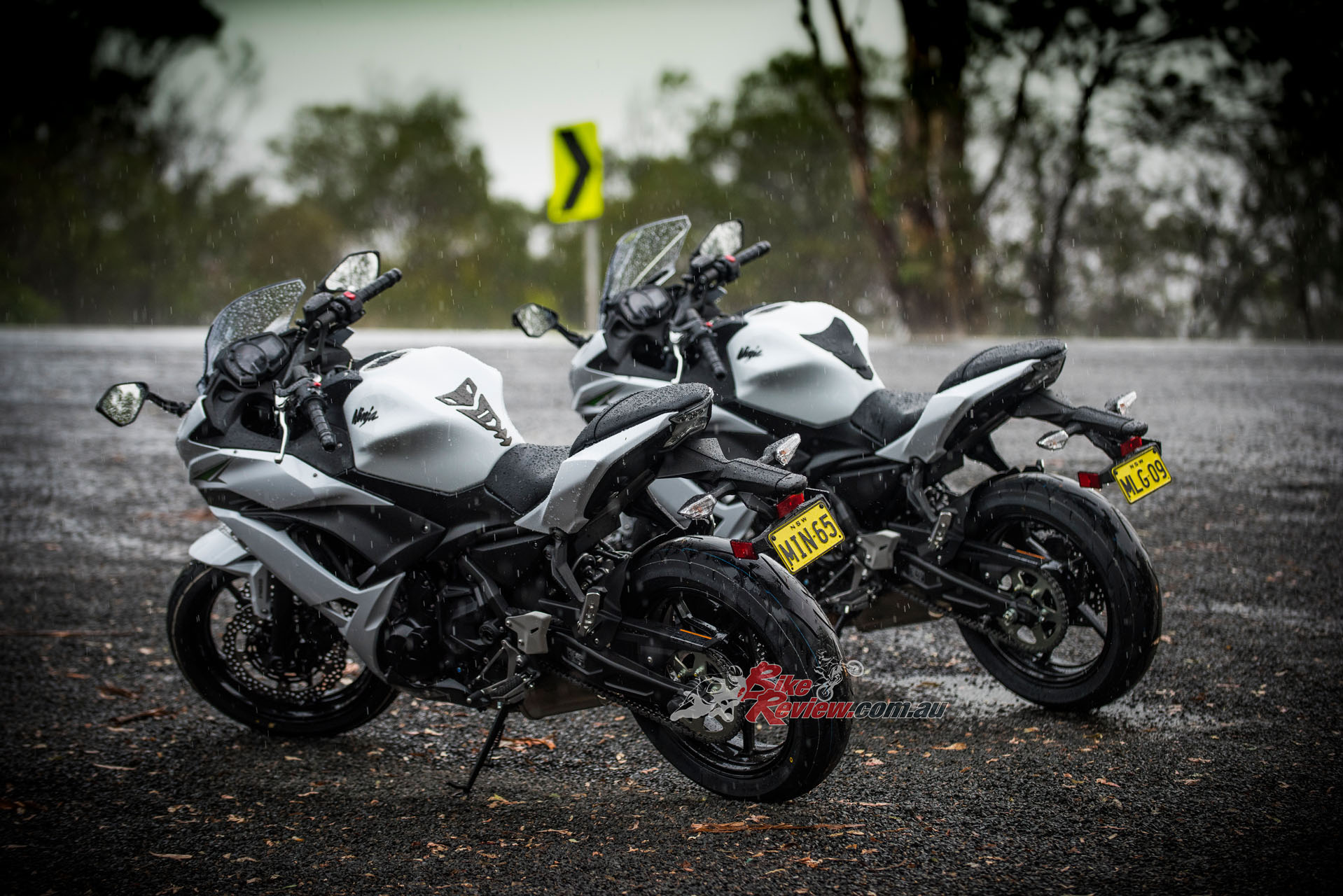 As with the Z650L the engine is punchy, with great low end that develops into a fun mid-range and never really noticeably dwindles off within normal riding demands. There’s enough performance to enjoy the ride but the throttle-stop puts a slight restriction on just how fast you open the taps.

Power delivery is smooth, fuelling good except for some small snatchyness on a steady/slightly closed throttle in more suburban conditions and the slipper clutch ensures a light lever action and predictable deceleration. 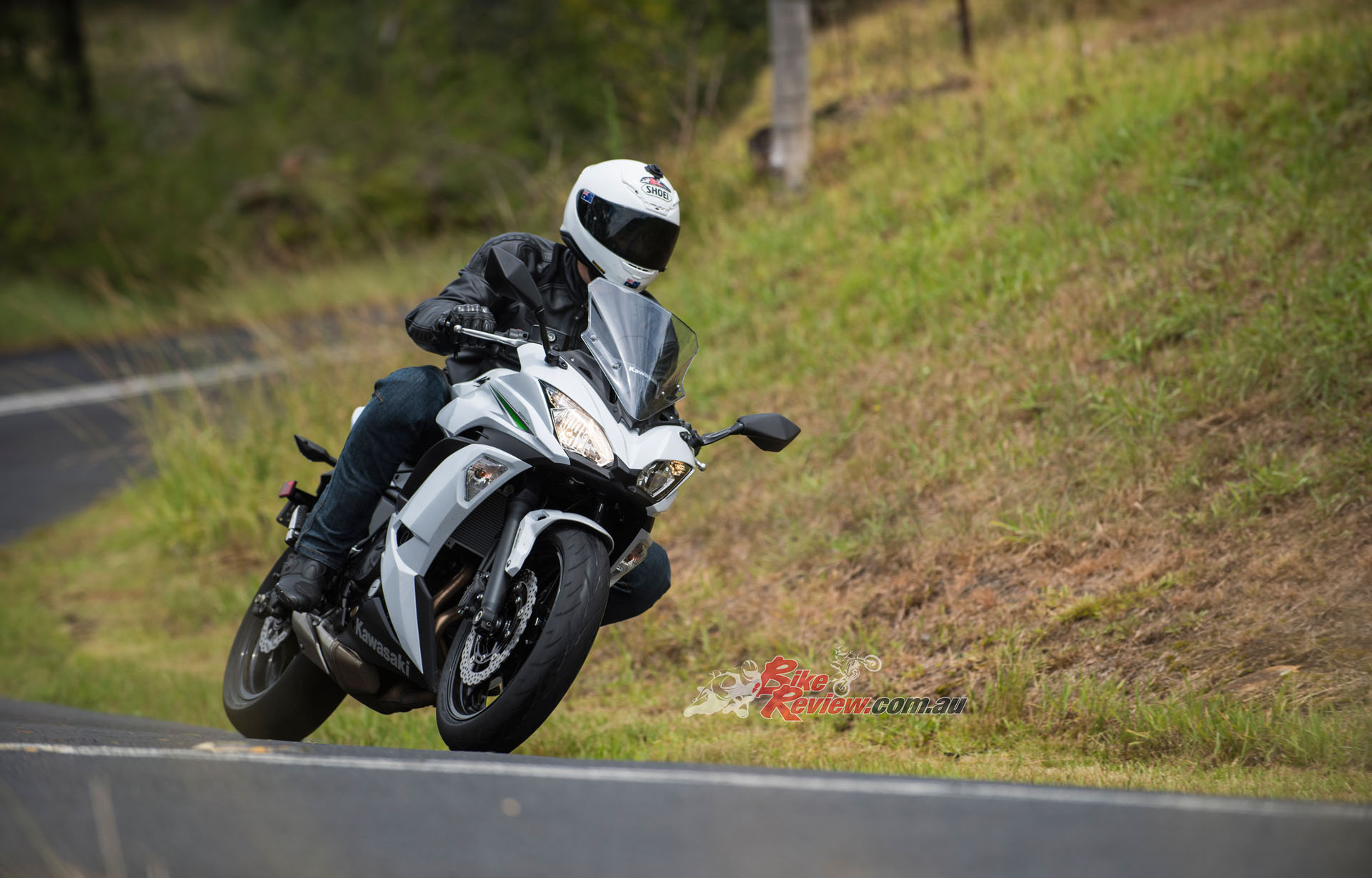 The Liquid-cooled, four-stroke, DOHC, eight-valve parallel-twin is 649cc, has a bore x stroke of 83 x 60mm, 10.8:1 compression, dual 36mm Keihin throttle-bodies and is a ripper of an engine.

Carving through the twisties is fun and engaging, with only the occasionally poor road surfaces in the damp worthy of note, with the stock tyres awesome in the dry once warm and just OK in the wet. The suspension is the same as that on the Z650L, with the front end on the soft side of things and the rear offering a bit of kick if you take speed bumps or pot holes at speed.

In the majority of conditions the ride is smooth, confidence inspiring and easy to push on, especially through the twisties with good bitumen. In the right conditions it’s flawless, over poor conditions the rear’s high speed compression damping can become overwhelmed. It’s a bargain priced 600 however, and really the only area I felt that pricing was reflected was in the rear suspension.

Brakes are dual front rotors with two-piston calipers and as is typical of a LAMS machine, bite is gentle, with good modulation and strong stopping power. The smaller rear rotor offers control but won’t be easily locked – many learners first reaction to something going wrong. Both are backed by a Bosch 9.1M ABS system for added peace of mind.

Overall build quality is great, and styling in particular a standout for me, with Kawasaki putting obvious efforts into ensuring the Ninja 650L offers great value. It’s the ideal premium LAMS machine, more than capable of competing with the likes of the main competition – the MT-07, but also providing a faired option in the segment. The Ninja 650L is a big step up from the previous offering, and on top of the great ride, there’s all the little features, like gear indicator, shift light and more than impress.

The Ninja 650L is also available in a full power version for the same price. We will be testing that shortly. Overall a great bike. 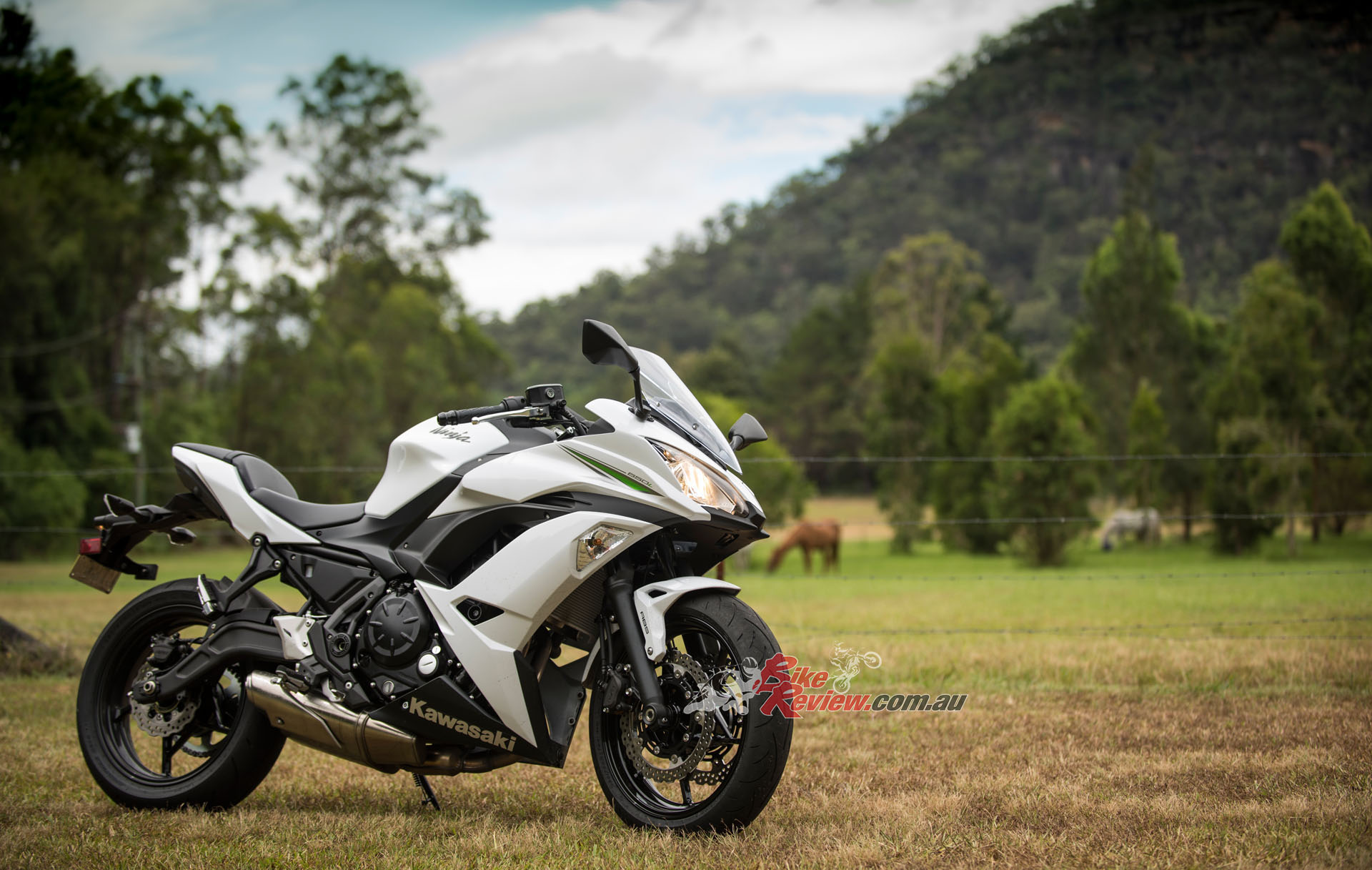 The chassis has also been an area of intense focus with the development of the Ninja 650L, with the combination of 790mm seat height, slim chassis and then between the knees tank making for an easy reach to the ground.

An auto-fast idle system simplifies starting and ensures the catalyser reaches optimum temperature quickly. A simplified cooling system routes coolant through the engine cases to the cylinder and head to reduce external plumbing, while hot air off the radiator is directed down under the bike.

A new assist and slipper clutch has also been added and uses two types of cams (an assist cam and a slipper cam), offering two new functions not available on a standard clutch. When the engine is operating at normal rpm the assist cam functions as a self-servo mechanism, pulling the clutch hub and operating plate together to compress the clutch plates. This allows the total clutch spring load to be reduced, resulting in a lighter clutch lever pull when operating the clutch.

When excessive engine braking occurs – as a result of quick downshifts (or an accidental downshift) – the slipper cam comes into play, forcing the clutch hub and operating plate apart. This relieves pressure on the clutch plates to reduce back-torque and help prevent the rear tyre from hopping and skidding. 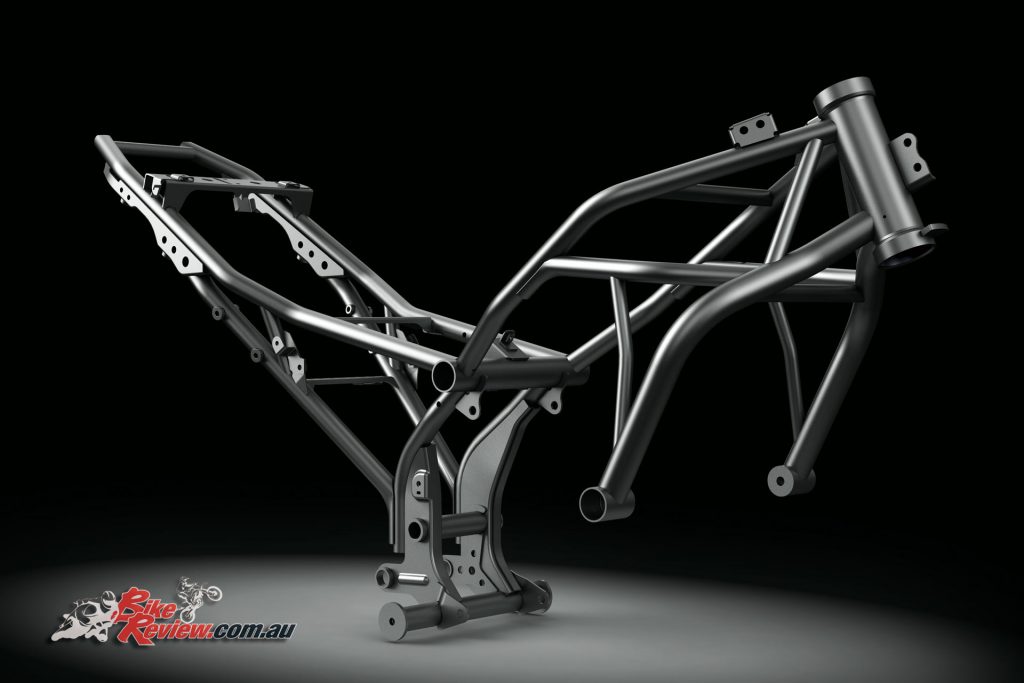 The chassis has also been an area of intense focus with the development of the Ninja 650L, with the combination of 790mm seat height, slim chassis and then between the knees tank making for an easy reach to the ground.

One of the key components is the all-new frame which weighs only 15kg and contributes significantly to the bike’s light, nimble handling. The lines of the frame were made as straight as possible, and when bends were necessary their angles were made as small as possible, resulting in a design that disperses stress extremely well 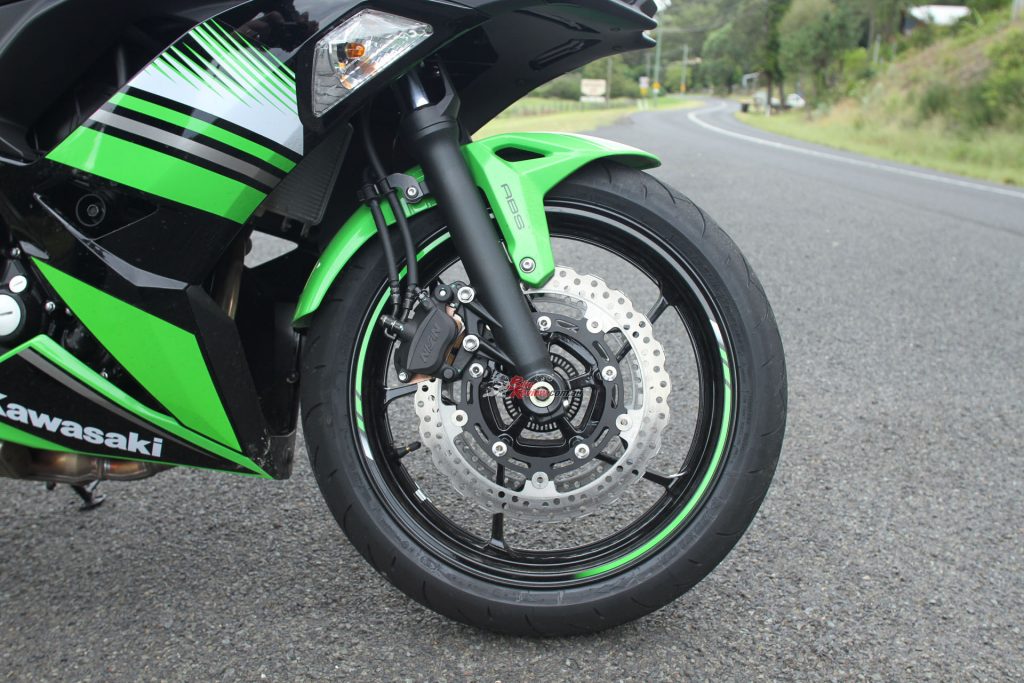 41mm telescopic non-adjustable forks handle suspension duties up front and a horizontal Back-link rear suspension offers a progressive character with preload adjustability. The rear suspension positions the shock unit and linkage above the swingarm for mass centralisationand to ensure operation is not affected by heat.

Both clutch and brake levers are five-way adjustable, able to accommodate a variety of hand sizes for increased comfort. 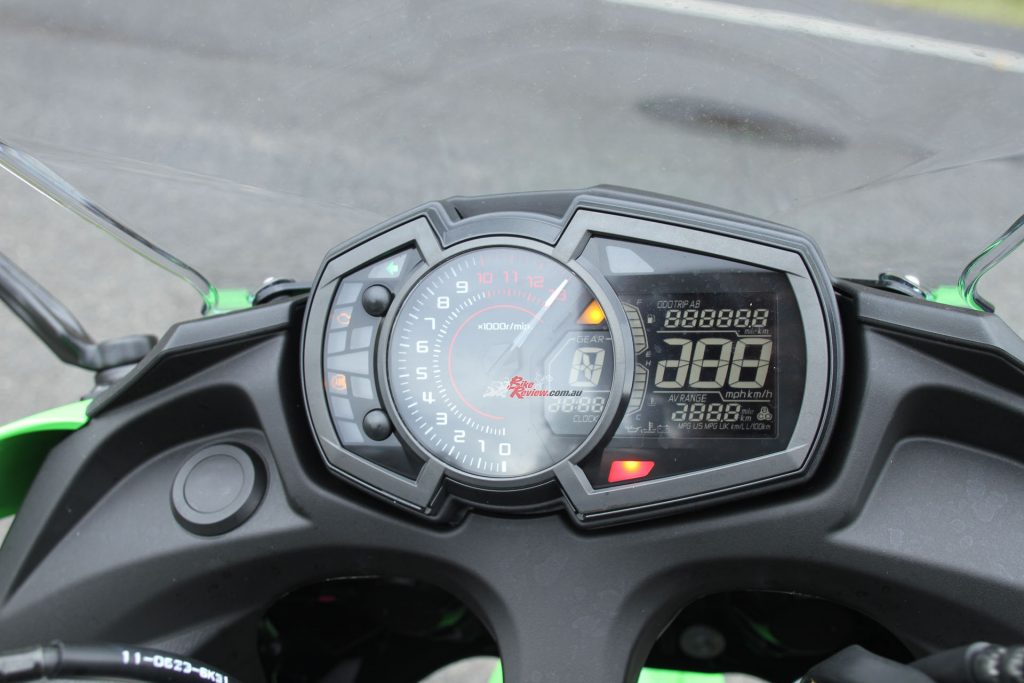 The instrument cluster features a large central analogue tachometer, as well as a multi-function LCD display with gear indicator. The Ninja 650L also features an adjustable screen as standard, with indicators incorporated into the fairings and separate raised handlebars mounted to the upper triple-clamp for comfort and a sporty riding position.

Other features include an LED taillight, luggage hooks built into the passenger footpeg stays, providing convenient tie-down points, and an inner fender that incorporates part of the chain guard to help keep the underside of the tail cowl clean and contributes to the aggressive Z styling. 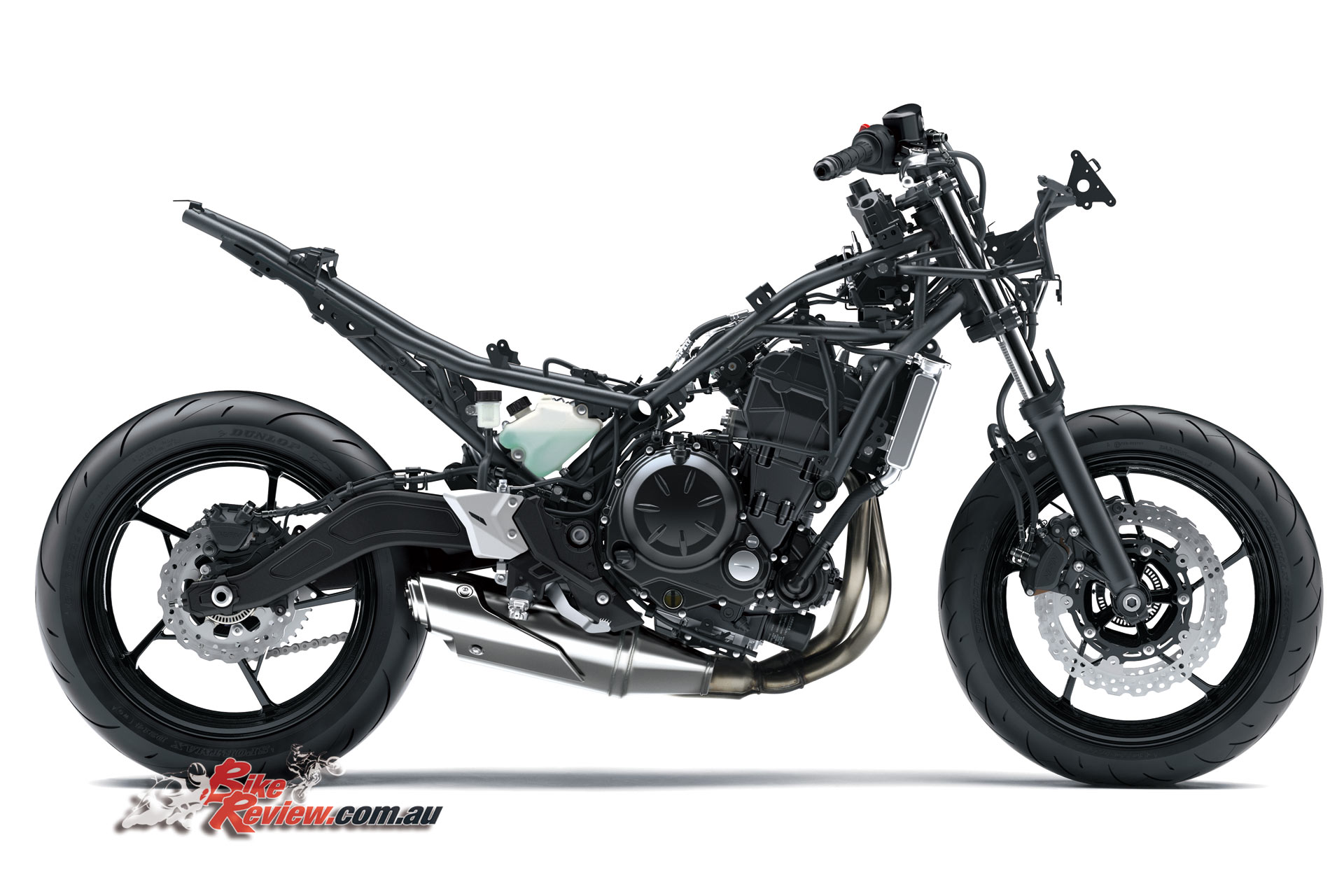 One of the key components is the all-new frame which weighs only 15kg and contributes significantly to the bike’s light, nimble handling. 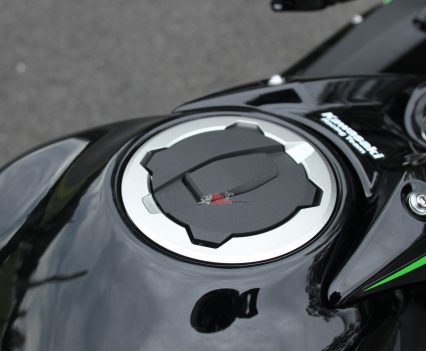 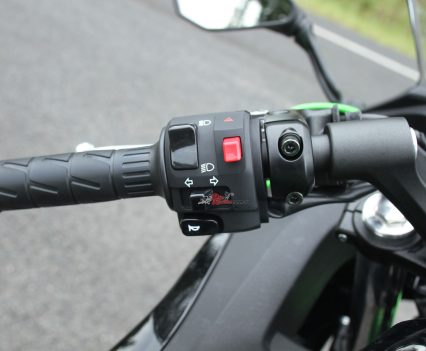 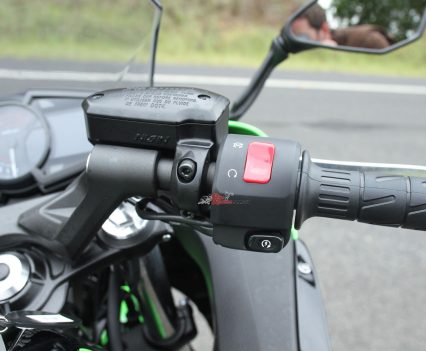 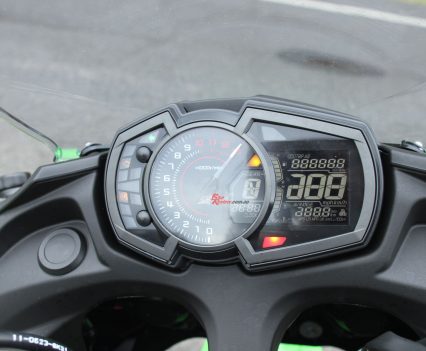 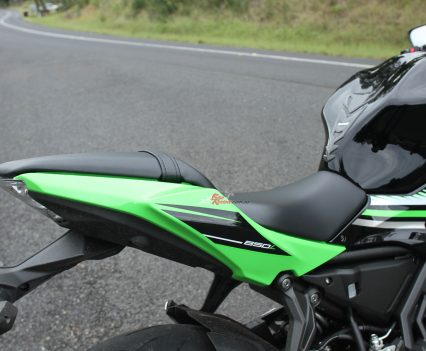 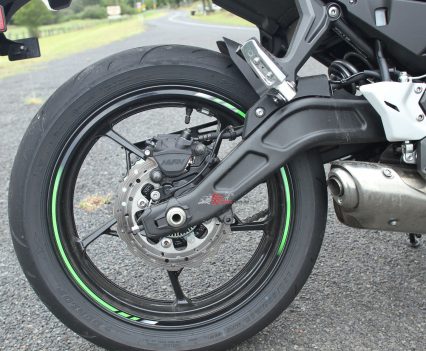 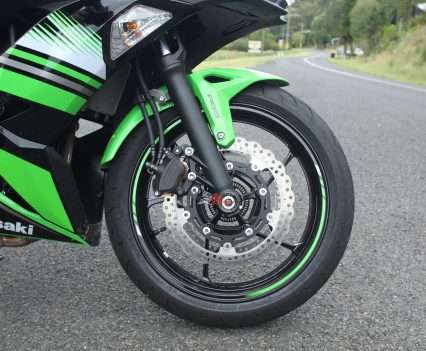 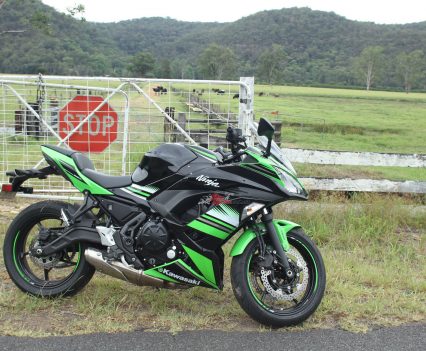 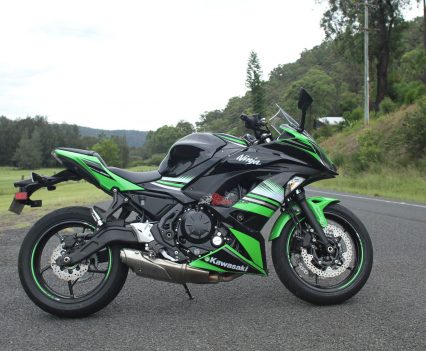 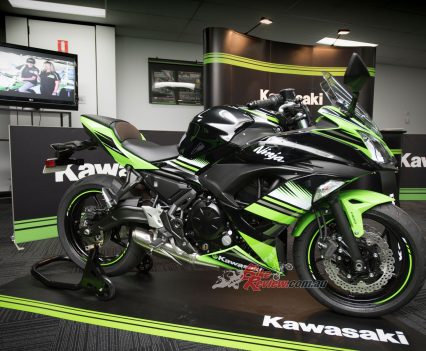 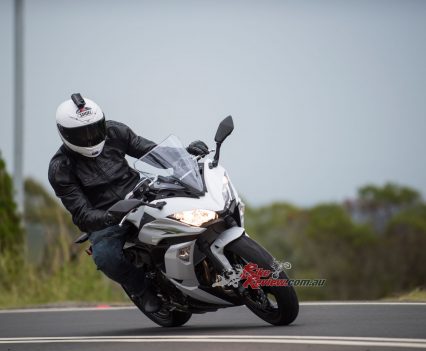 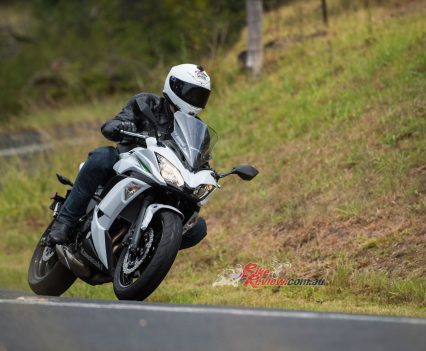 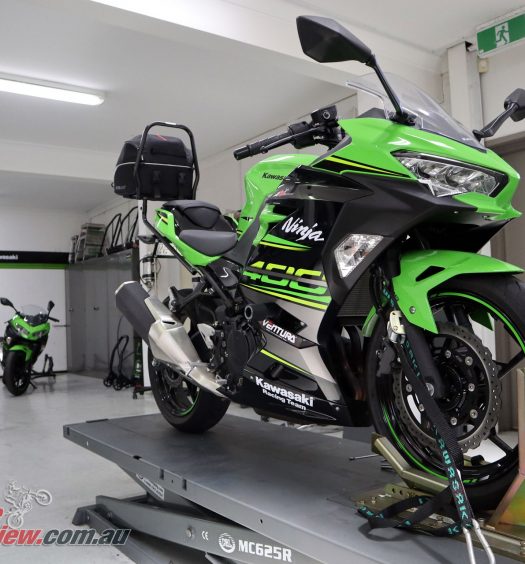 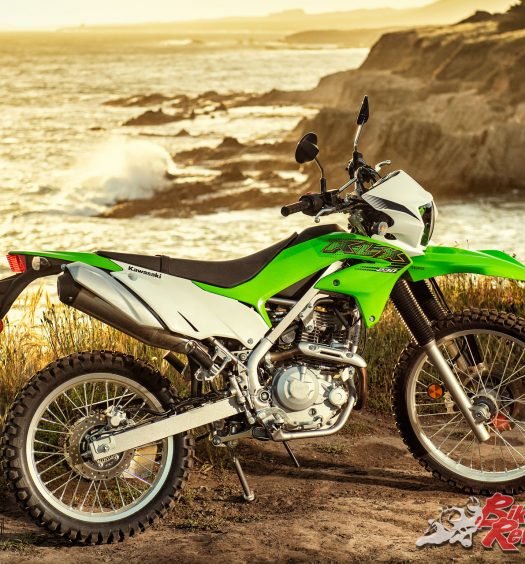