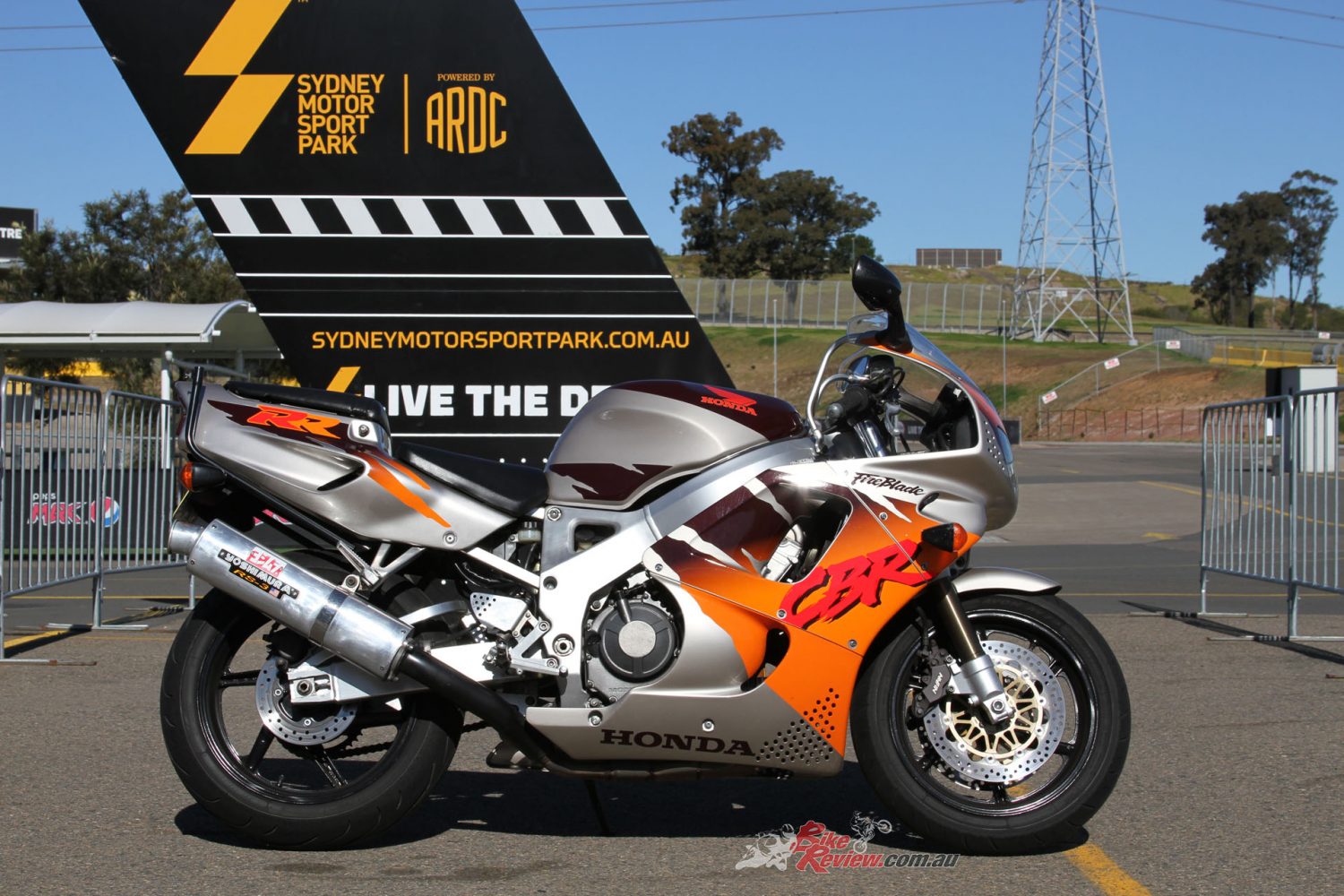 I was 17 and in year 12 at high school when the first CBR900RR Fireblade was released. I had an RZ250FN at the time and I’d just started hanging out up at the Mount White Café, Old Pacific Highway. One sunny I was wagging school as usual and headed up the Old Road on my RZ. 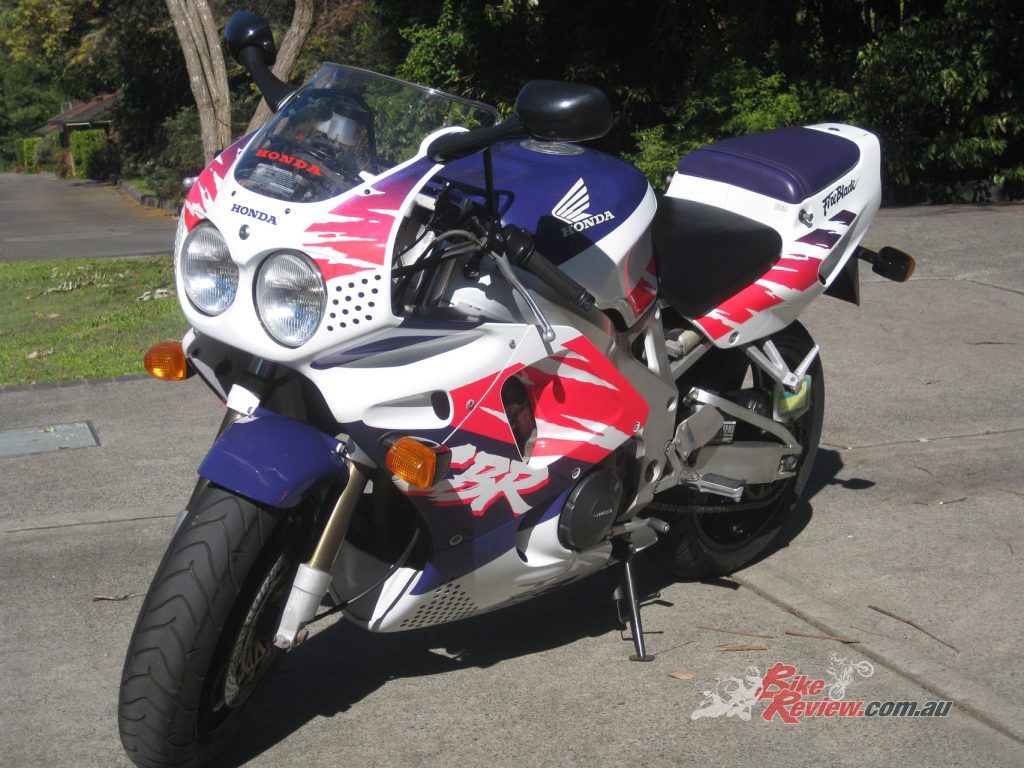 The Honda CBR900RR was a perfect poster bike, nothing like it had ever been available to the public before.

A guy in brand new Dainese white/blue leathers pulled up on a white/red/blue Fireblade. He parked it and walked into the shop to get a coffee. The bike was ticking and crackling. The Bridgestone B45 tyres were melted to the edges. Was this guy God? To me, he was… To ride THAT bike. I’d never seen anything so wild. 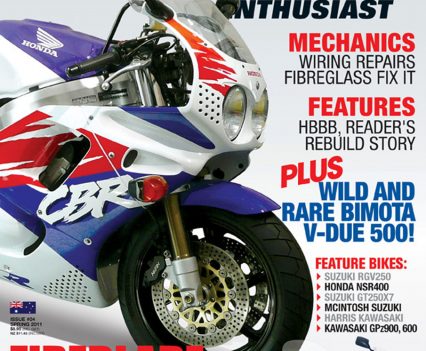 I ran a feature on the Blade and gave it the cover on one of the magazines I used to own, I love the bike so much! 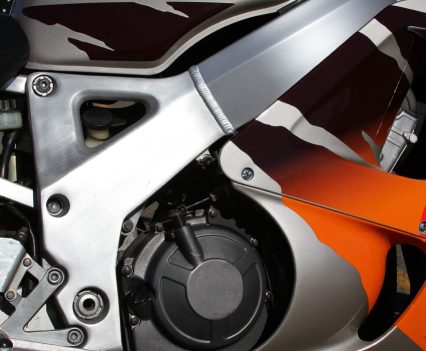 A huge fuel tank and a very minimalist design was something completely new back when the bike came out.

What made the bike so special? It had the fattest looking tyres I’d ever seen. And nothing. Exactly that. Nothing. I was literally in shock when I saw how minimal the bike was. The engine looked tiny and there were open gaps everywhere. I remember looking through the area that would normally be an airbox and I could see straight through to the other side of the bike. Just like a GP machine.

Check out all of our Retro bike reviews here…

There was nothing to the CBR. I also remember the tank looked so wide and the ‘bars and seat too. The holes in the front fairing made it look like a factory racer. I’d never seen anything like it at all.

Soon Two Wheels and Streebike came out with full launch reports on the cover, with Matho and Seddo in full flight, knee down, at Phillip Island. I reckon I read those articles 1000 times each. I still have the Streetbike one! 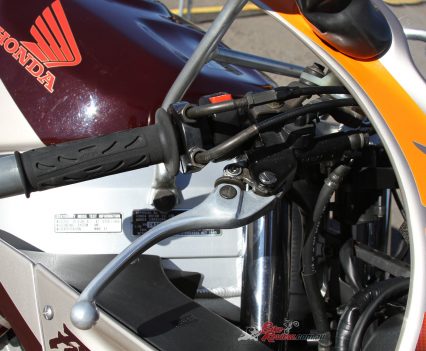 The remote reservoir Nissin master-cylinder was trick for the era but the brakes are poor compared to modern standards. 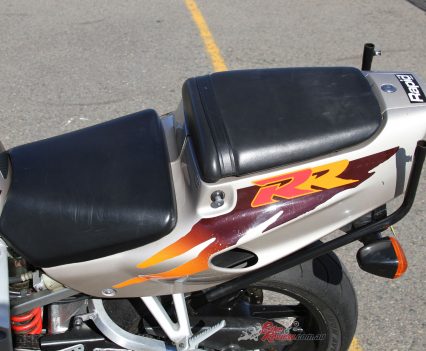 Under seat storage is huge, the pillion seat is on a hinge. The Ventura rack was something I fitted.

My mates, Simon and Mick, ended up getting one each. They were older than me, in their 20s maybe, and working full time. They ended up a stunt team and could wheelstand forever – top gear wheelies. And they could punt them so hard through the turns. I always thought to myself, one day I’ll own one… 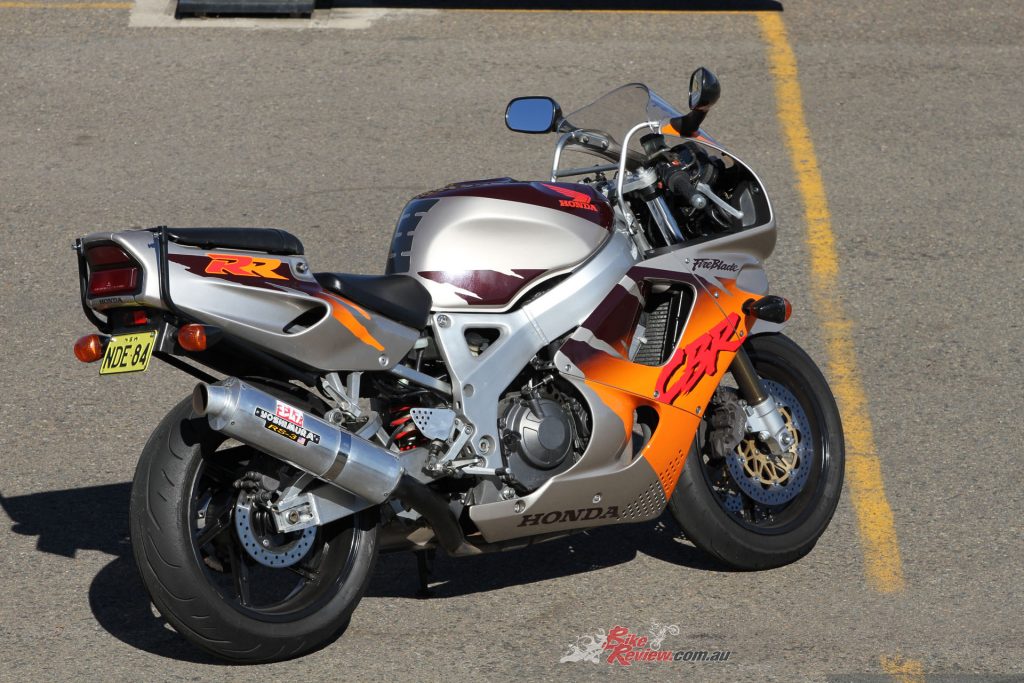 To me this is a style that will never grow old, then again, I still listen to 1990s alternative rock all day at my desk!

Fast forward to 2015 and I was turning the big 40. My lovely wife, Heather, decided that she would buy me that original Tiger Stripe Fireblade I’d always wanted. The problem was finding one! 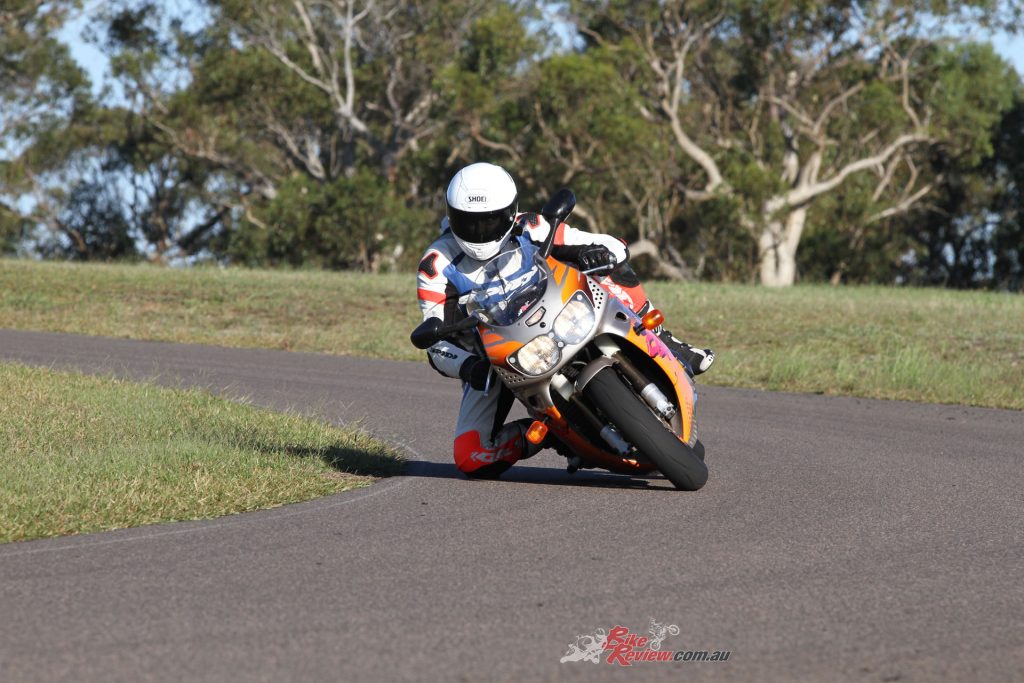 A lot of people swap the 16in front wheel for a 17in but I don’t see the point. I love the way it steers and it is stable enough, plus there are decent tyres available for it.

After months of searching and keeping an eye on the market, an original one owner 1994 Tiger Stripe came up for sale only 100km from home. I could not get there with a trailer fast enough! The issue was, I had a deal to wait until my birthday before I rode the bike, it sat in my garage teasing me for weeks… 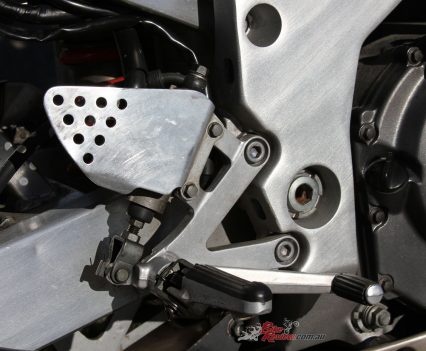 Plenty of ground clearance but the footpegs do scrape. 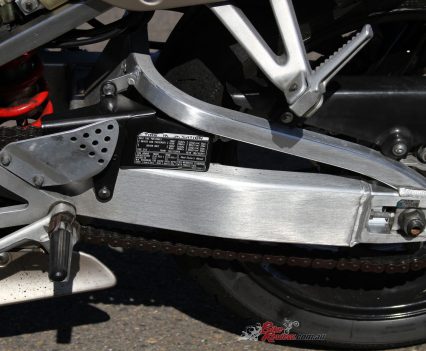 I stripped the bike and detailed it, fitted new Avon tyres, changed the oil and filter and airfilter (DNA), fitted new spark plugs, checked the valve clearances, and rebuilt the CV carburettors. I also replaced the wheel bearings, brake pads and lines, painted the wheels black, greased the pivot points, changed the fork seals and purchased (another mission) an OEM exhaust (found one in Tassie that had been removed and stored since first service 1994). 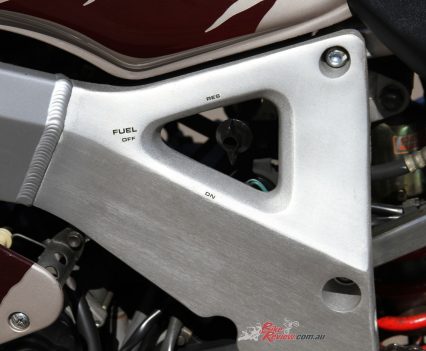 I had a lot of trouble with the fuel tap but eventually was able to sort it out. There were no rebuild kits as they are supposed to be non-rebuildable. 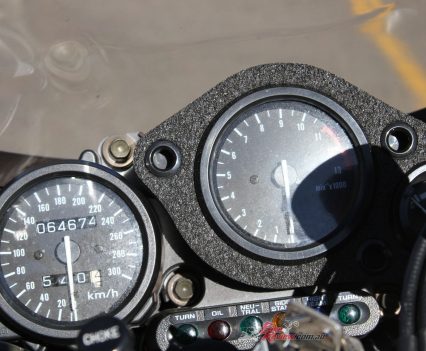 For convenience I fitted a Ventura luggage system and taller clear screen and I also managed to buy a brand-new NOS top and side fairings from Honda Australia (the last parts in stock!), so by the time the birthday came around I was ready to go, aside from the exhaust which arrived later (so I ran with the Yoshimura one). 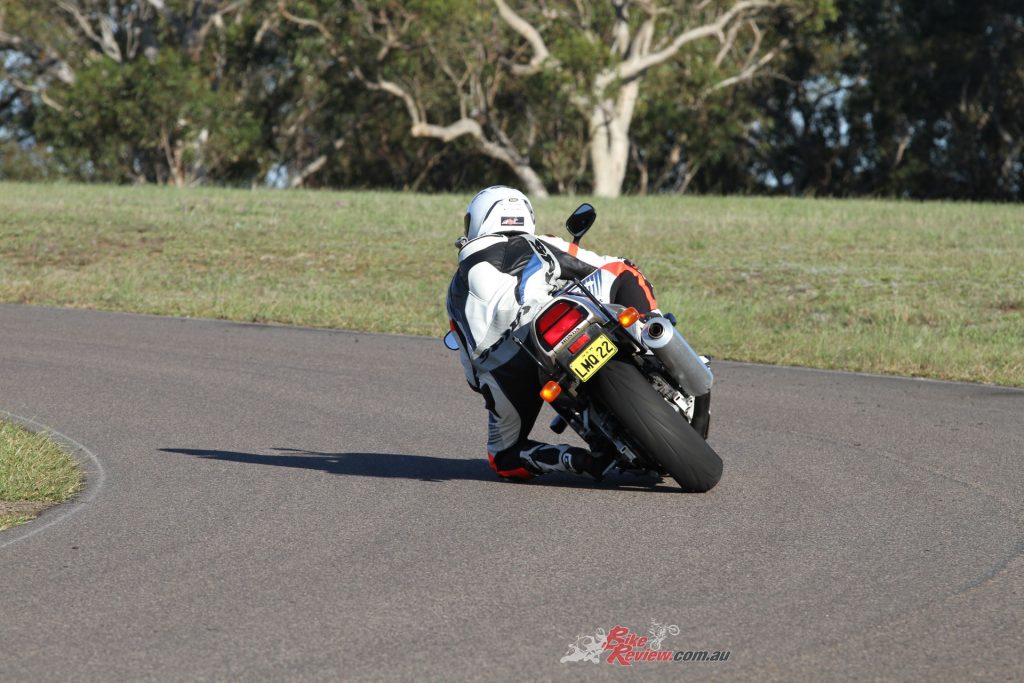 It didn’t take me long to get stuck into it, the Blade is a fantastic handling bike for near 30-years old.

Was I happy? I think the pictures tell a thousand words. The Fireblade was everything I’d imagined it would be all of those years ago when I was a teenager dreaming about new bikes. It made me feel young again and is a real weapon even by today. 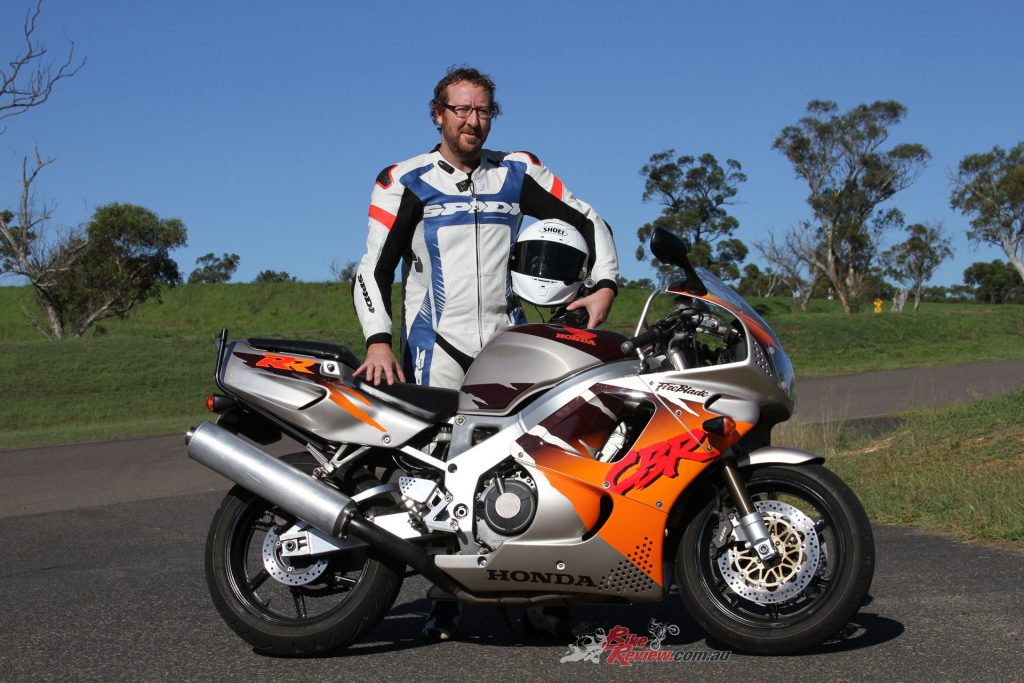 I got this 1994 original one owner Fireblade from my wife Heather for my 40th birthday. This shot was taken after my first ride on it.

There are still some original Blades around, but they are so rare. Most have been raced or streetfightered or crashed. It’s been 30-years next year, so a first model 1992 Blade now is the equivalent to a 1962 Triumph was when the Blade came out! 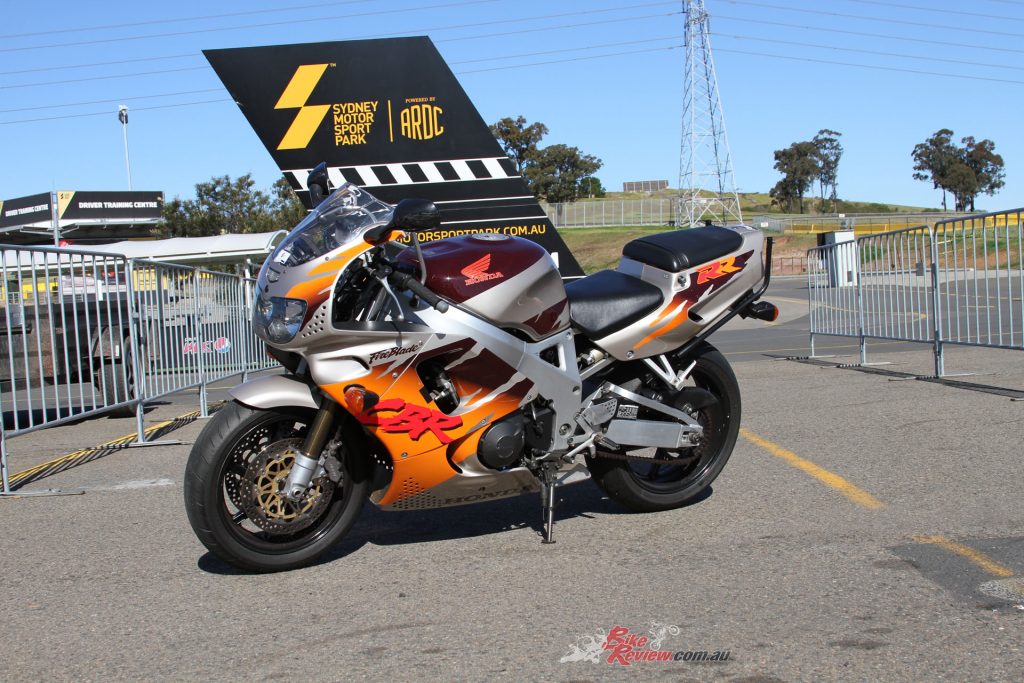 The Tiger Stripe was the 1994 model, the second generation and first with the more modern single headlight.

Owning the Fireblade was a great experience. I even rode it to some race meeting, raced each day (not on the Fireblade), then rode home after a full day of racing, still happy! I also rode it to many bike launches and would still smile on it on the way home! A great bike, I wish I kept… 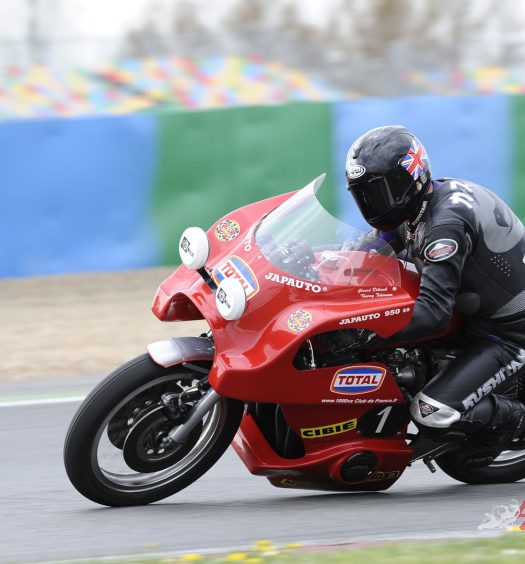 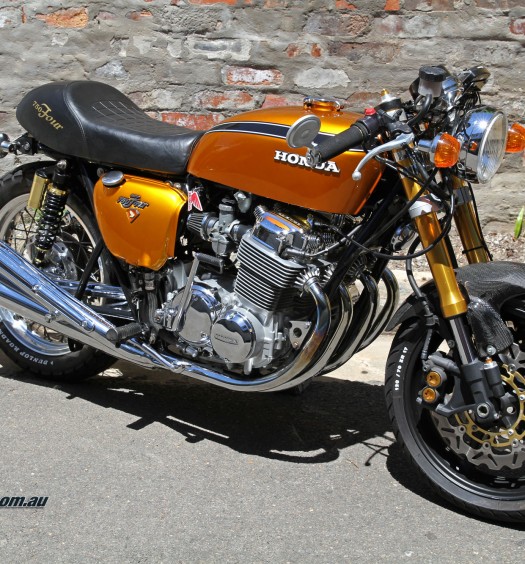