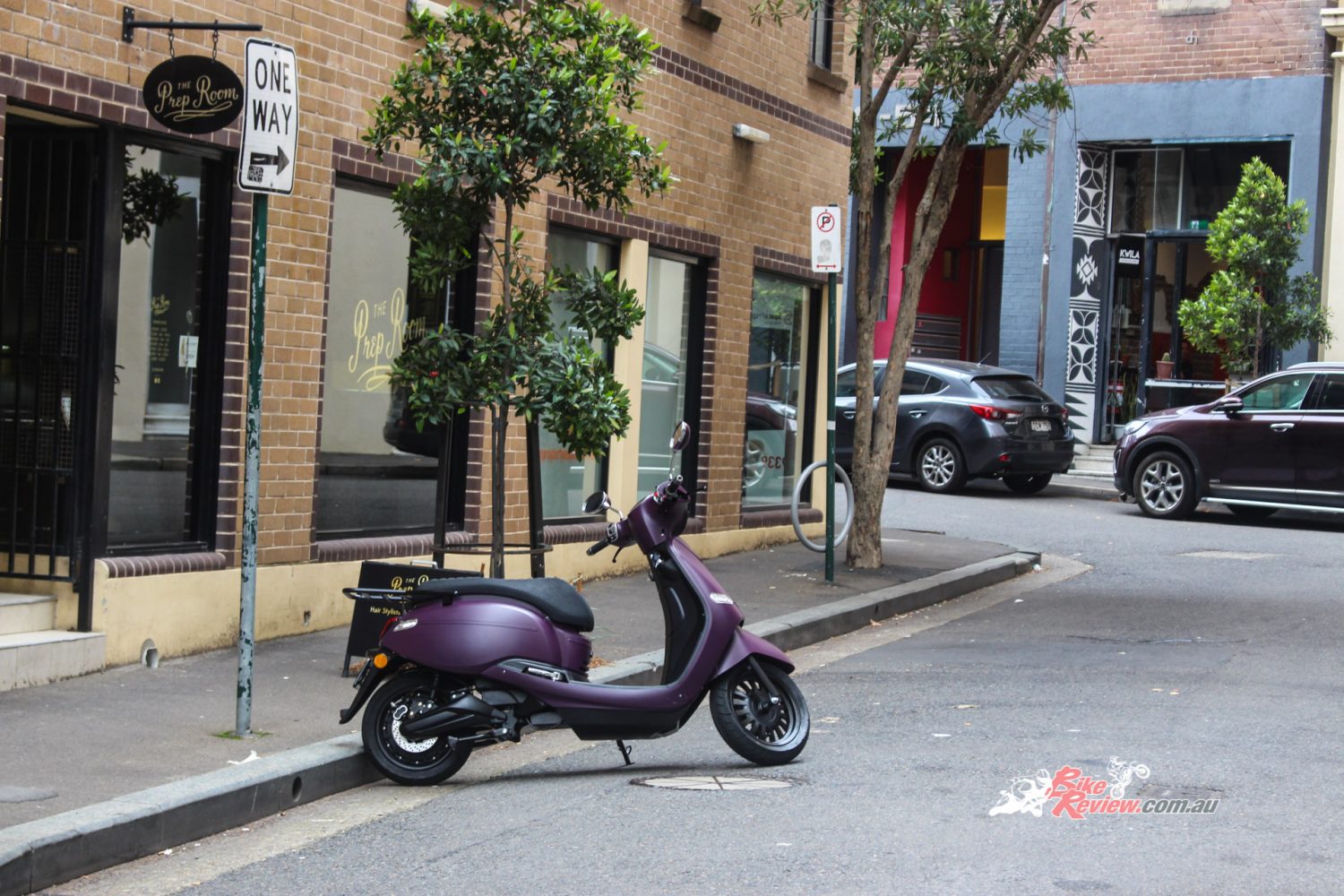 The future is here. It’s quiet, green and still a ball of fun. We had the pleasure of taking the LAMS approved 2020 Fonzarelli Arthur 3 for a spin around Sydney recently – the Arthur range are fully electric scooters designed to take on the urban commute and local travel… 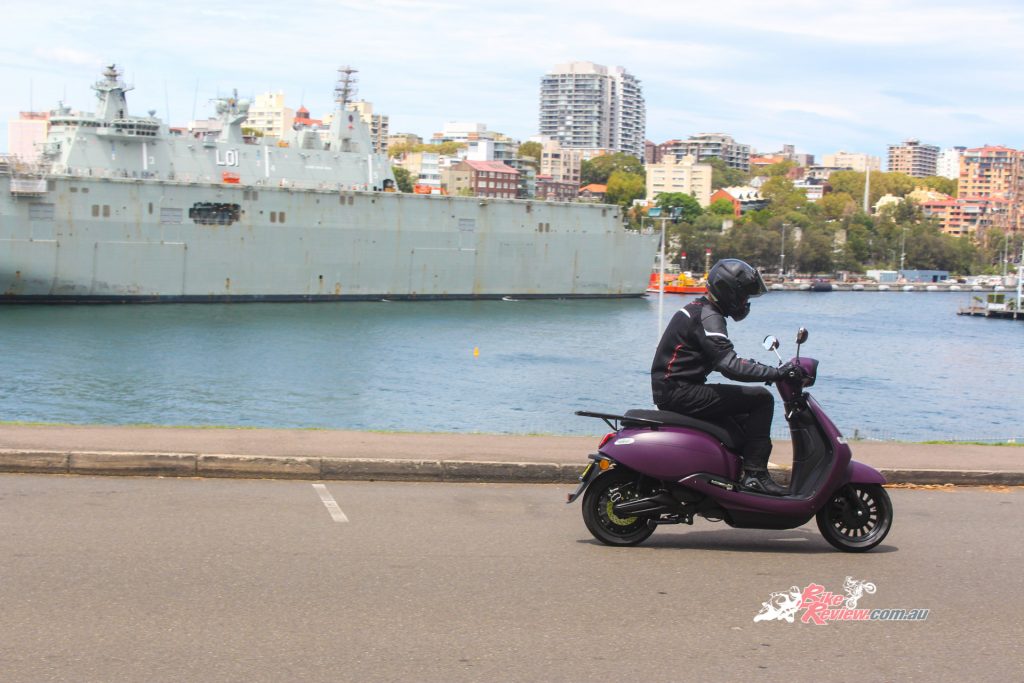 The Arthur 3 really shines when it comes to the urban commute and is a great machine to have as a little runabout.

Fonzarelli, an Australian company who assemble and deliver their fully electric motorcycle lineup right here in Sydney, present the Arthur 3, an electric scooter designed to tackle the urban commute and to fulfil the need for an economical, eco-friendly transport option.

Fonzarelli head honcho, Michelle Nazzari,spoke to me about her business, Fonzarelli and the Arthur.
Before Fonzarelli, Michelle worked in the transport industry, developing and manufacturing diesel, hybrid and electric buses. She is also a passionate motorcycle enthusiast and saw that there was potential in applying electric powertrain technology in something much smaller than a bus. 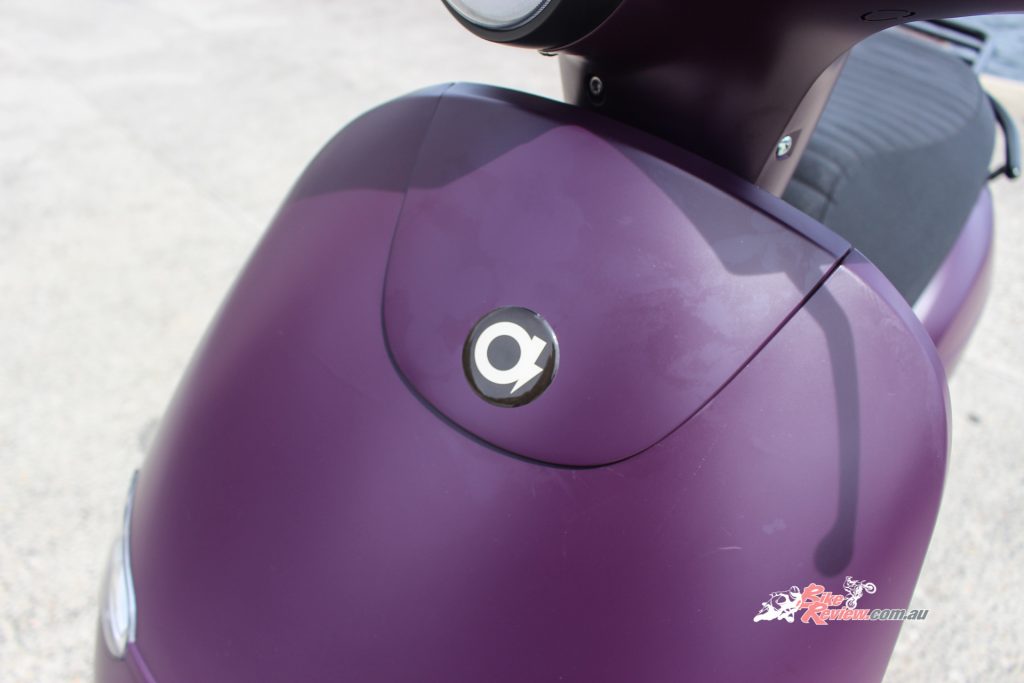 You can identify the Arthur by looking for the badge on the bodywork that proudly states the electric power!

Michelle stated that the Arthur was designed to be a competitively priced entry-point for customers shopping in the electric motorcycle market. The Arthur 1, the cheapest of the three options, has a 60V powertrain, with a top speed of 50km/h, and just like a 50cc moped, is legal to ride on an unrestricted car driver’s licence in States where it is permitted, such as Queensland. 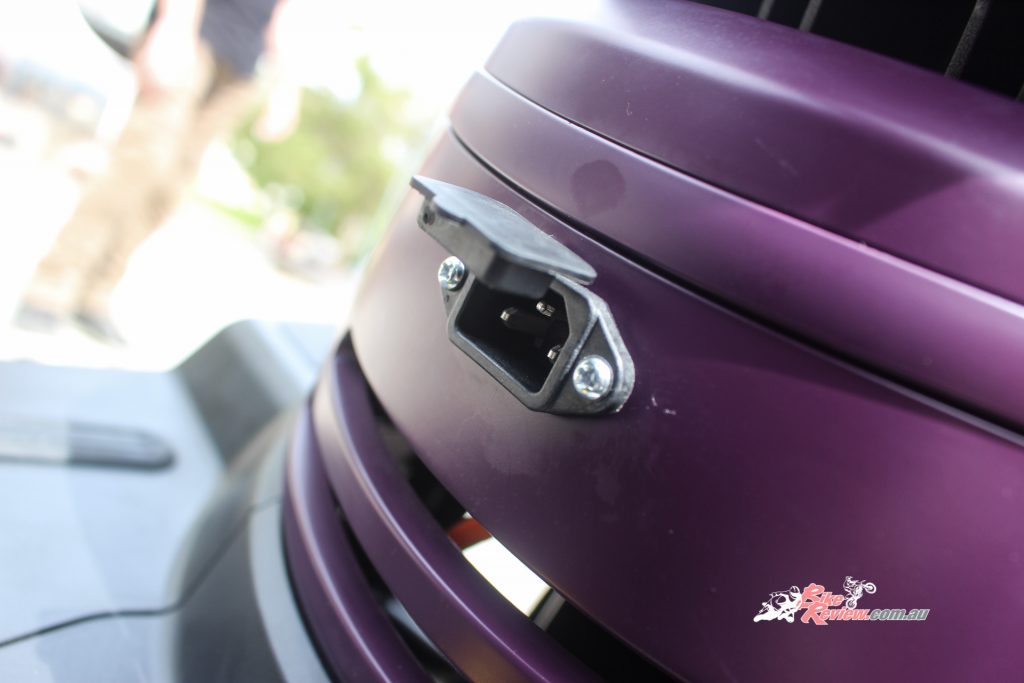 The Arthur 3 can be topped up by being plugged into a wall socket, with a fast charger available for a quick charge.

Michelle said that, as a general rule, customers can expect a charge time of six to eight hours across all models with the standard mini-charger that is included with the Arthur models. This charge time can be increased with their fast charger, which can get the battery up to 80 per cent within roughly an hour.

The three models include a 24-month or 10,000km warranty, with servicing at $150 AUD per year and initial servicing at 6 months then 12 months. Fonzarelli also keep a spare parts inventory of up to one million dollars in Sydney, with hopes to expand this further in the future. 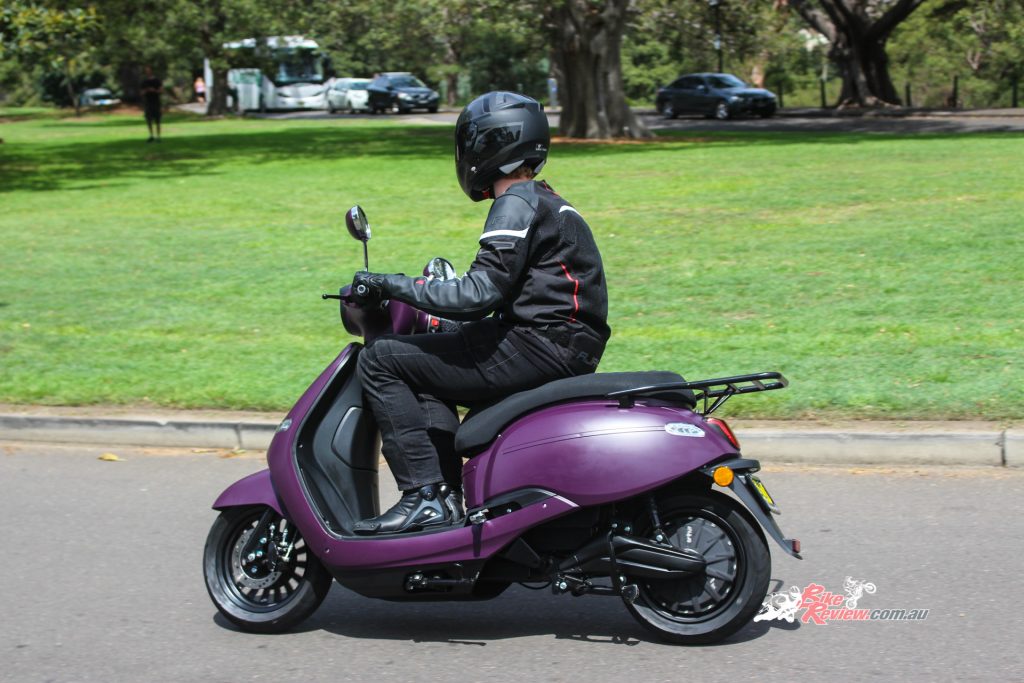 The Arthur 3 has comparable performance to that of a 110cc petrol scooter. The Arthur is no doubt quicker off the line.

THE RIDE
As soon as I hopped on the Arthur 3 I was taken by surprise, as I turn the key I’m not met with any sound at all, not even a fuel pump chime. The only indication I have that it’s alive is the Arthur’s LCD dash coming to life. I see on the dash, just up near the modes, some small text that reads ‘ready’, signally to me that the throttle is live and ready to go.

Immediately, this little machine became so much more than just your ordinary, run-of-the-mill, scooter. It felt familiar; as I ride a scooter and deliver pizzas – but pulling out of Redfern and hearing that futuristic sound of the electric motor whizzing away and the feel of that instant torque was just unique. 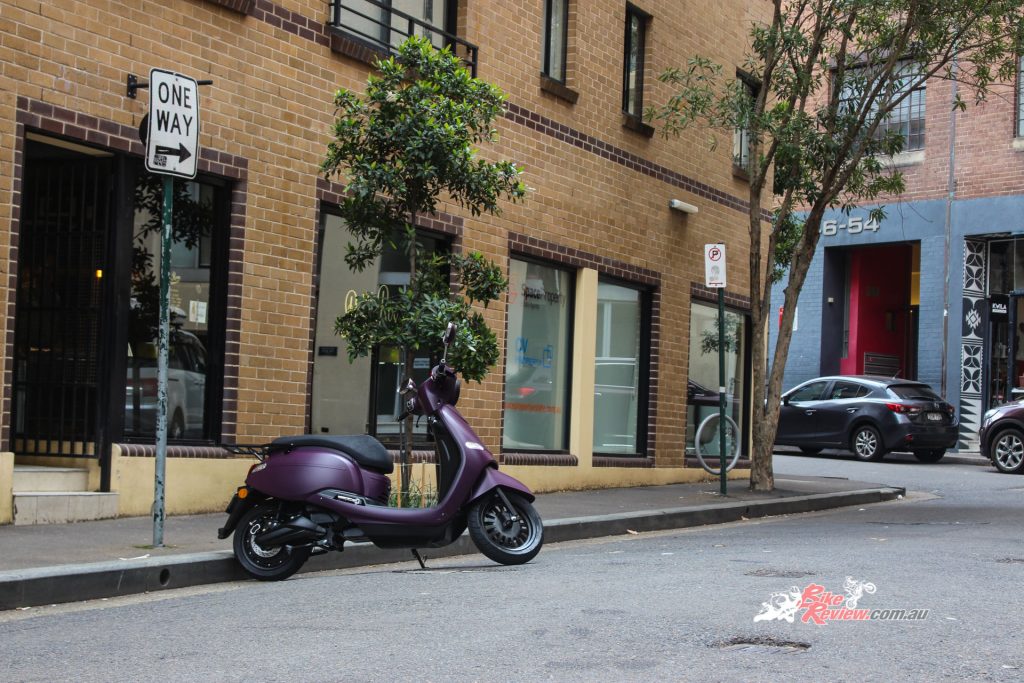 Fonzarelli’s Arthur 3, shown in a Royal Aubergine finish, was the perfect way to get around the city and be green too!

The Arthur 3 has an upright seating position as to be expected from a scooter, which felt comfortable and with all the controls falling easily to hand. Controls include indicator switches, low beam/high beam, hazard lights, kill switch, reverse button, mode switch and both brake levers. The reverse button is a pretty nifty little feature that can make life a little bit easier. The only issue I had with the hand controls was the indicator switch, which felt a little bit bulky, but I got used to it. 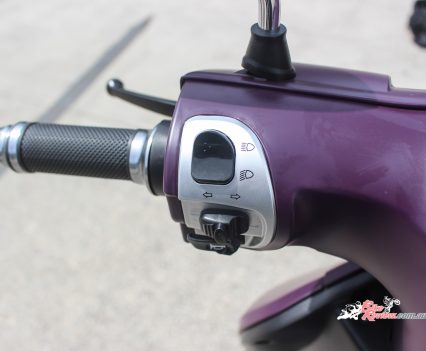 High beam/low beam controls, indicator controls and the horn are found on the left side. 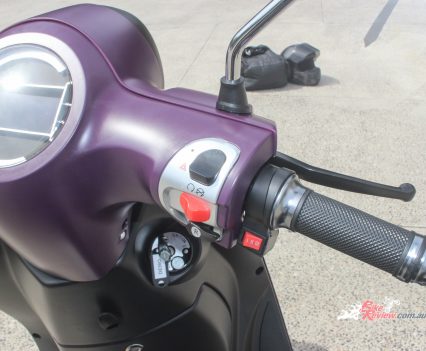 Kill switch, reverse button, hazards and mode switch are on the right hand side.

The LCD dash is easy to navigate and shows speed, mode, battery percentage and range, turn signal and other various elements, however the dash is hard to see in direct sunlight.

The overall size of the machine, as well as the design, can be likened to a Vespa. It isn’t a large scooter, which means there is no problem getting on it, and you can manoeuvre it between traffic when lane filtering with ease. The design of the Arthur appears to be drawn from that of the more popular Italian scooters, relevant in aspects such as the headlight, taillight and indicators integrated into the bodywork. 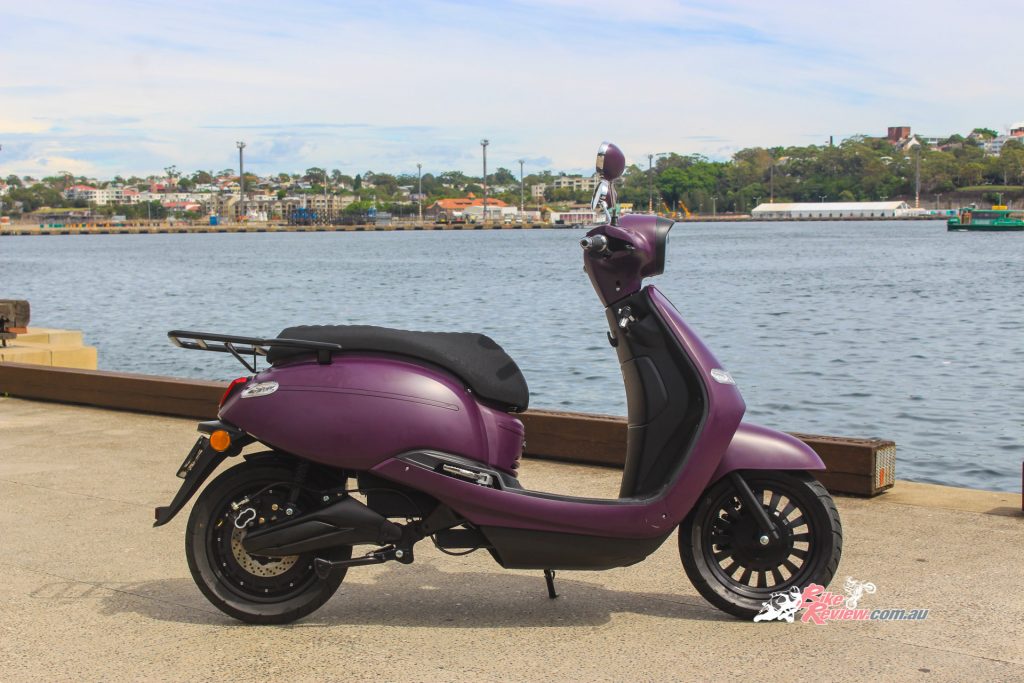 Much of the Arthur’s design appears to be drawn from the already popular Italian scooters such as a Vespa.

Off the line, I felt a noticeable difference with how it took off compared to your ordinary, petrol-powered machine. It took me a little by surprise, with a small twist of the throttle, this little thing was leaving me behind at the traffic lights. It wasn’t uncontrollable at all, in-fact it wasn’t that crazy, but definitely has an upper hand off the line over a small capacity petrol scooter for example, and it was definitely a bunch more fun than you can get from your ordinary scooter!

Another thing that took me by surprise is how light it felt. I was expecting the weight of the battery to be one of the limiting factors of this scooter; given that most electric motorcycles and cars today are weighed down by their massive battery packs, but the Arthur 3 is only 98kg! 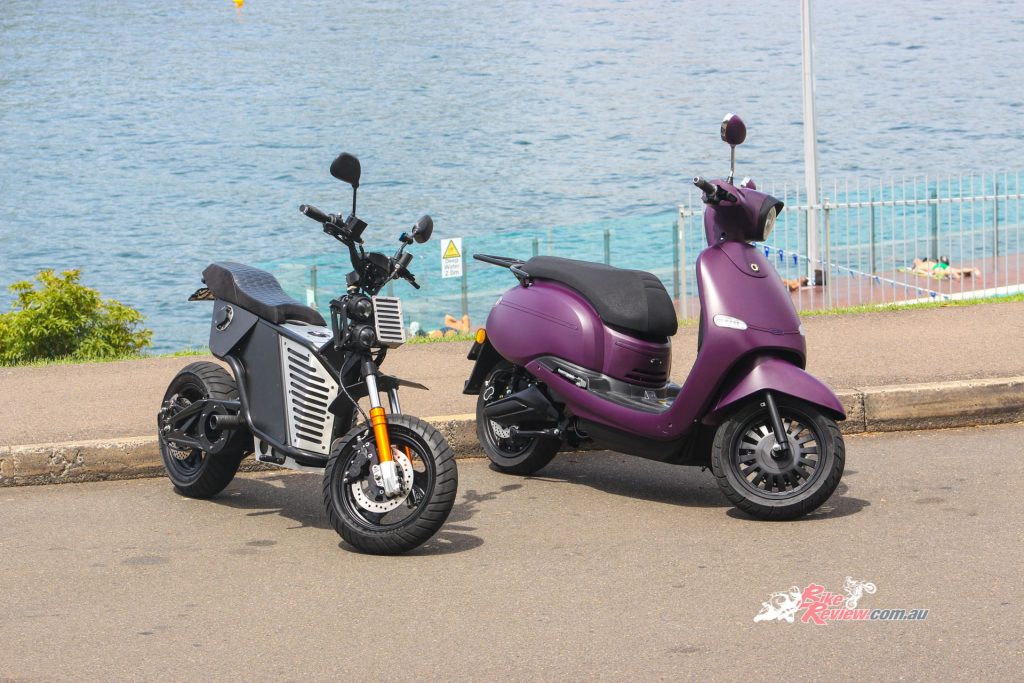 The Arthur is a pretty small scooter, which is evident when you line it up next to Fonzarelli’s NKD mini-bike.

You would think that some sacrifices must have been made, such as the battery range, to achieve such a lightweight machine but you still get a claimed 100km of range! I rode for approximately 60km over three hours in town and there was 30 per cent charge remaining, which is impressive.

Sure, in the big picture, 100km isn’t a lot and the internal combustion engine is still the go-to if you commute long distances or ride all-day, but the Arthur 3 really shines when it comes to city commuting and as a little runabout, and has an impressive range for an electric bike. 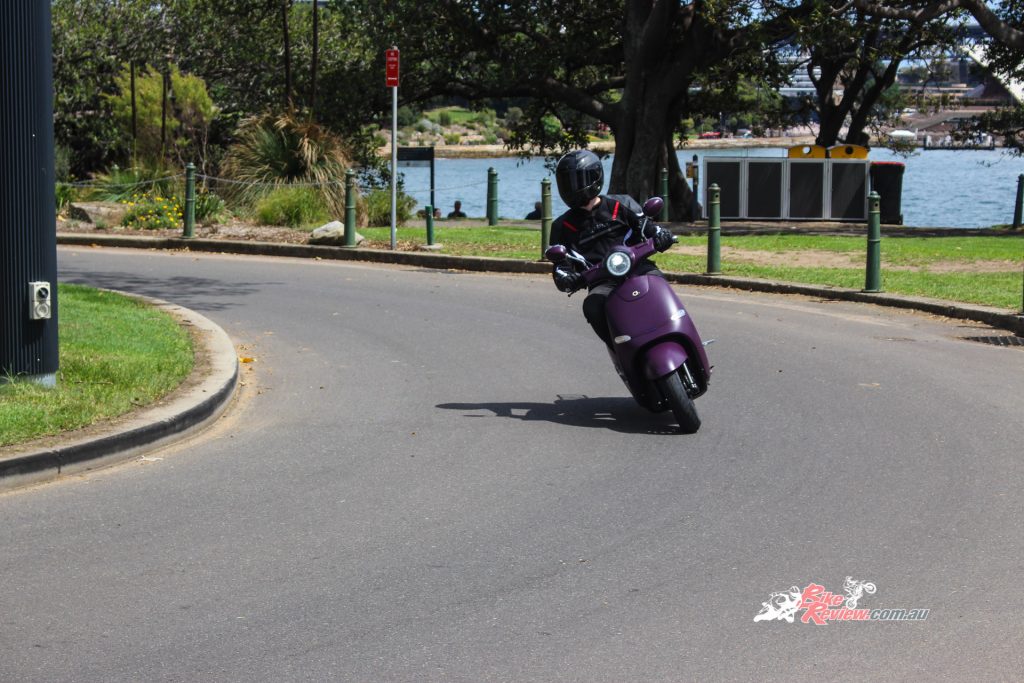 A twisted front-end and throttle refinement issues meant that cornering performance of the Arthur 3 could be improved.

One of the letdowns of the Arthur 3 is the throttle modulation, which feels a bit touchy and choppy. It seemed nearly impossible to just keep the throttle steady and power delivery consistent. I would be riding along, and feel the scooter jerking, throttling on/off at random times. This became a problem particularly in cornering, and it would be great to see the throttle response improved to the quality of the NKD I rode the same day.

The Arthur 3 comes with budget Yuanxing tyres as standard, which helps keep the price low, however although they did an adequate job in the dry, a better set of tyres could definitely improve cornering ability and braking stability once the OEM pair wear out.

The suspension is basic and in terms of cornering and overall ride, it is a limiting factor. More damping control at both ends would improve the ride and bring it up on par with the price point. 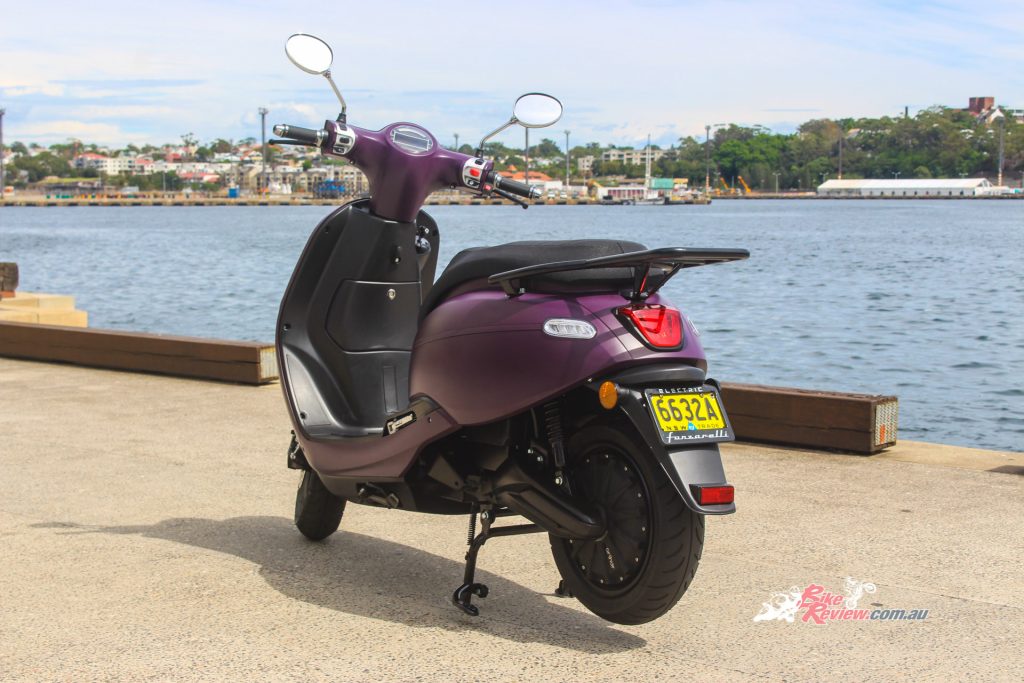 More damping control at both ends of the Arthur 3 would greatly improve cornering performance and handling.

The front-end of this particular scooter was twisted out of alignment, most likely due to being incorrectly tied down during transportation. There was also some steering head flex that I could really notice on the brakes, and even Jeff could see it while we were riding together.

If you are planning on carrying a pillion on the back of the Arthur 3 then there is plenty of room, a pretty comfortable seat to accommodate a passenger and fold out pillion ‘pegs, however it might lack some grunt and you would probably see quite a drop in performance carrying some extra luggage. 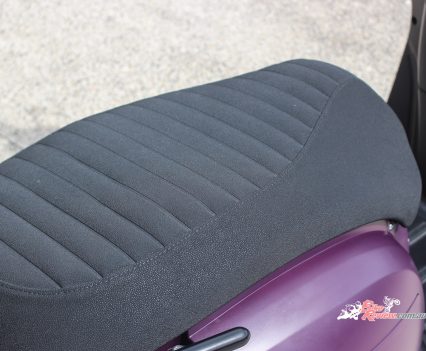 The seat boasts plenty of room for a pillion passenger, but might not have enough guts to keep performance high. 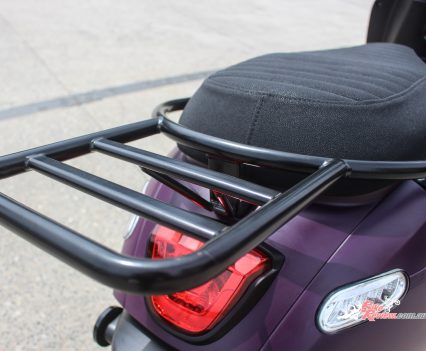 Our Arthur 3 had an optional rack mounted, a feature that does not come standard on the Arthur 3.

Speaking of extra luggage, our Arthur 3 had a rack mounted, which could be used to carry some extra bits and pieces, however this doesn’t come as standard, and you can forget about under-seat storage because there’s a battery in there. One feature, however, is the storage located just above the footwell, which has a USB socket inside to charge phones, etc. 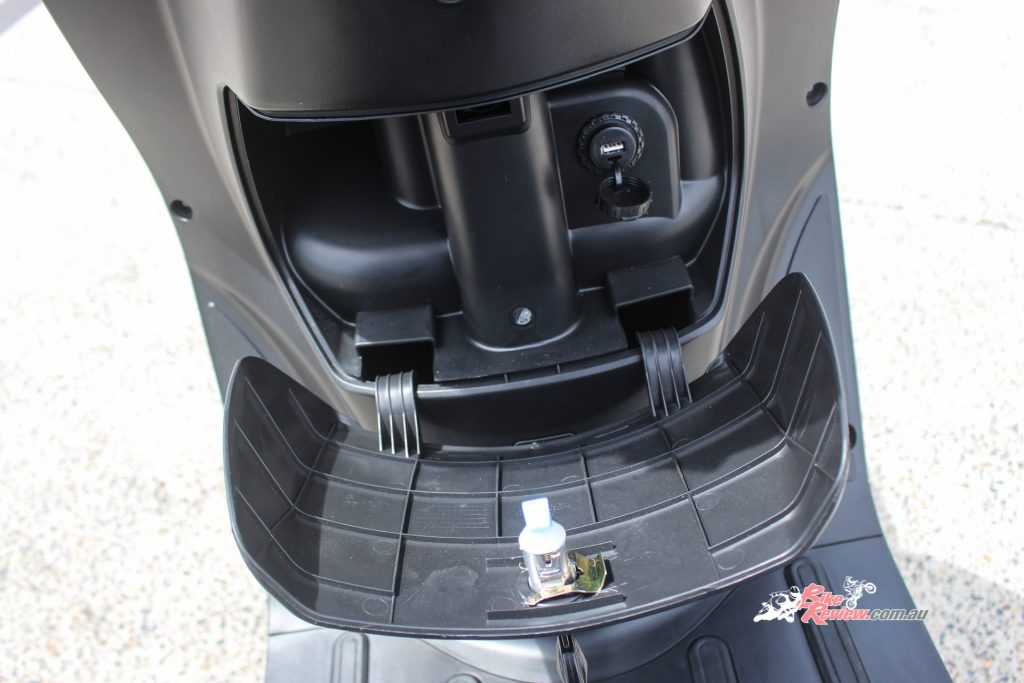 Storage compartment, which holds plenty of space for a phone, wallet, keys, etc. and includes a USB socket.

Power delivery is otherwise linear and wasn’t too much to be a handful. Getting onto the motorway, the Arthur 3 tops out at 80km/h and will happily do that speed until you run the battery flat. Fonzarelli includes three different modes that can be used to adjust the power output, with the first mode being limited the 40km/h, useful for going through school zones, and up to level three, reaching 80km/h. 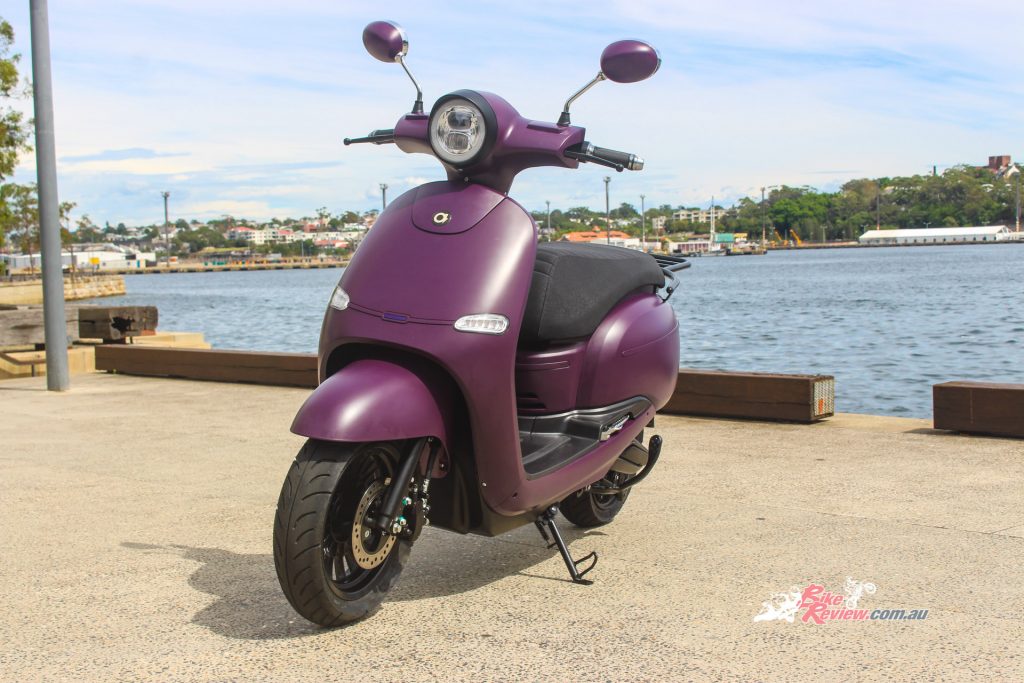 The Arthur comes standard with hydraulic disc brakes at the front and the rear, which makes for good stopping power.

With discs at the front and the rear, the Arthur has brakes with plenty of stopping power for a scooter. They are enough to save you if you have to pull off an emergency braking manoeuvre, so no faults there, however ABS would be nice for the price point. 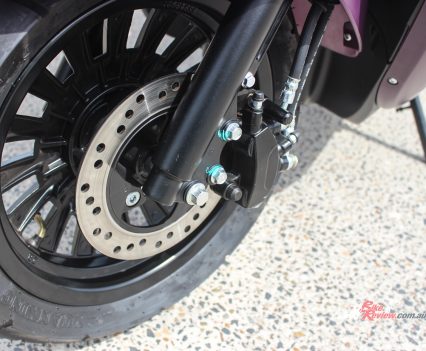 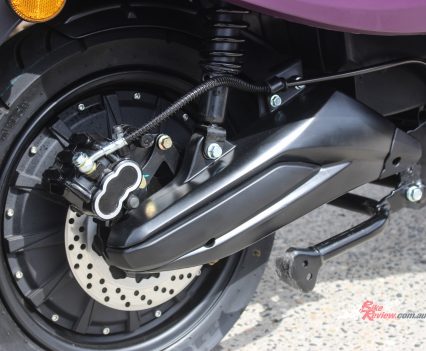 The Arthur sits on a side-stand and has a centre-stand. The side-stand is tucked away a little though, and you should be careful when putting it down so that you don’t scratch the fairing with your shoes/boots.

We tested the Arthur 3 Royal Aubergine finish, however certainly doesn’t look bad. You can pick up the scooter in various other finishes such as Black Matte, Moon Blue, Racer Green and Scarlett Red. 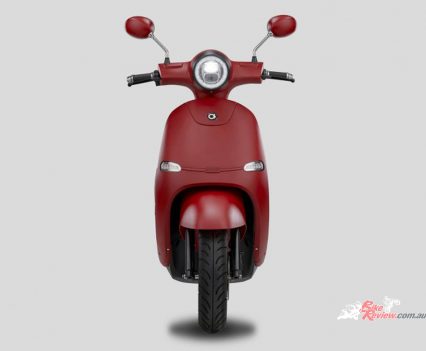 You’ll have a number of different Arthur colours to choose from. 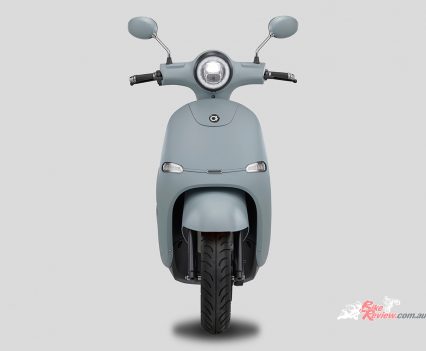 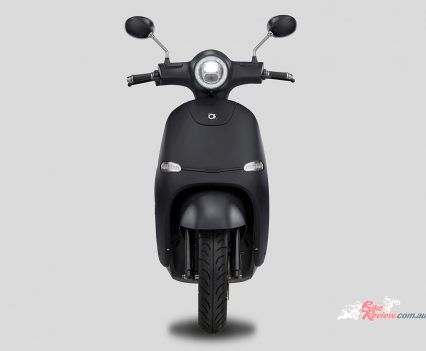 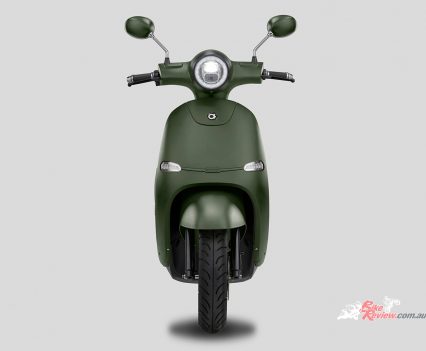 $6,990 + ORC gets you the Arthur 3, a great little machine for local travel and urban commuting, and while it might not be as cheap to purchase or as convenient over distance as a similar spec petrol scooter or motorcycle, it’s a step in the right direction and something to definitely consider if you are in the market for a new scooter and want something that is a little more eco-friendly and individual.

With a claimed running cost of only $1 per week average, if reliability of the Arthur range proves strong, the bike will pay for itself in no time for daily riders… 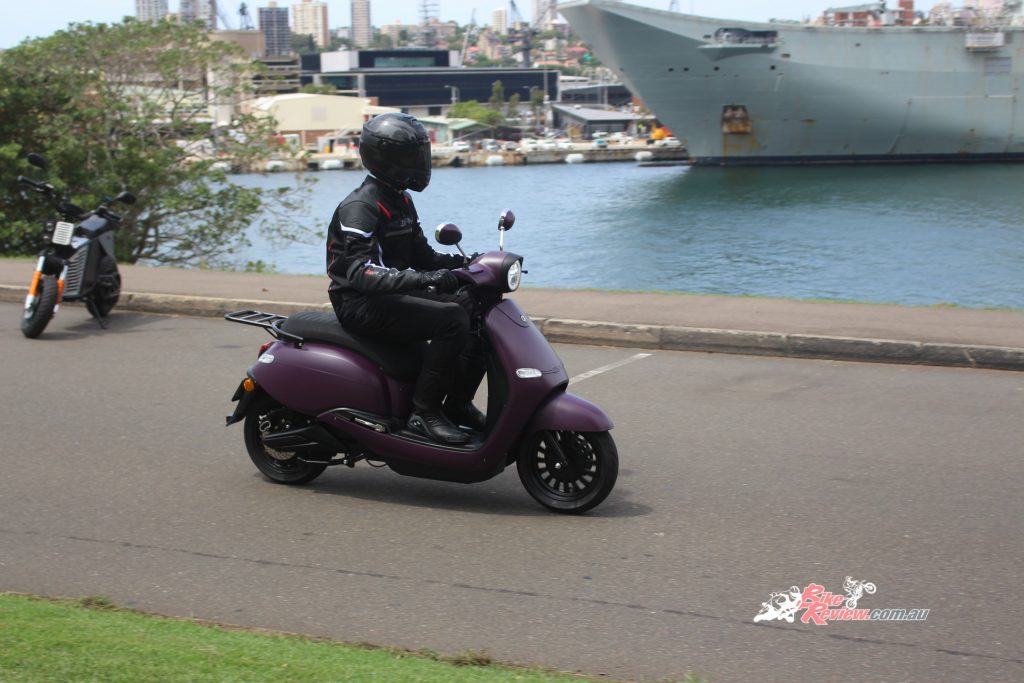 Fonzarelli claims that the Arthur range costs as much as $1 per week to run, a significant advantage over petrol.

The future is here. It’s quiet, green and still a ball of fun. We had the pleasure of taking the LAMS approved 2020 Fonzarelli Arthur 3 for a spin around Sydney recently – the Arthur range are fully electric scooters designed to take on the urban commute and local travel… 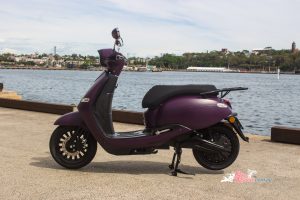 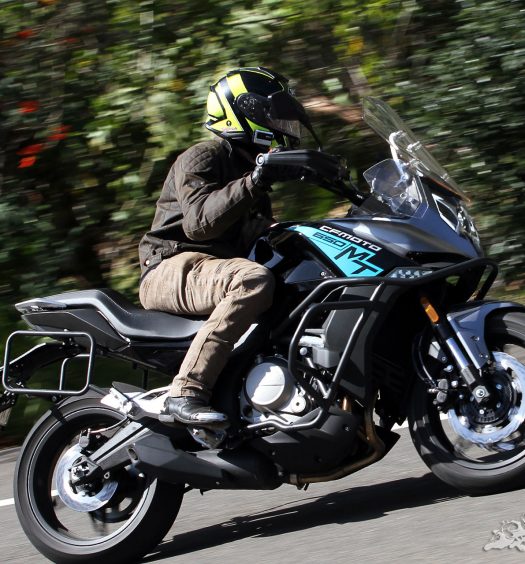 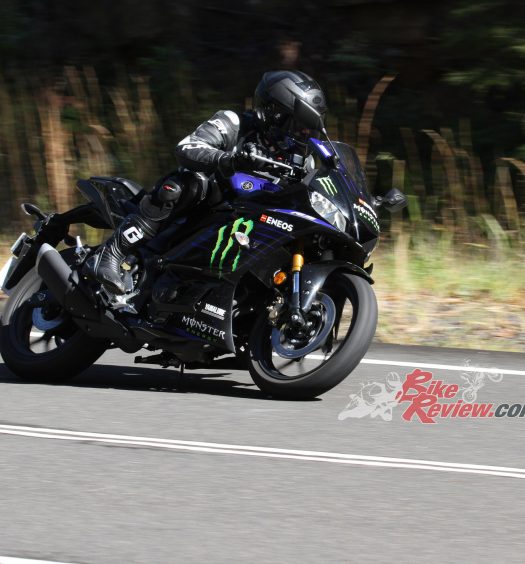