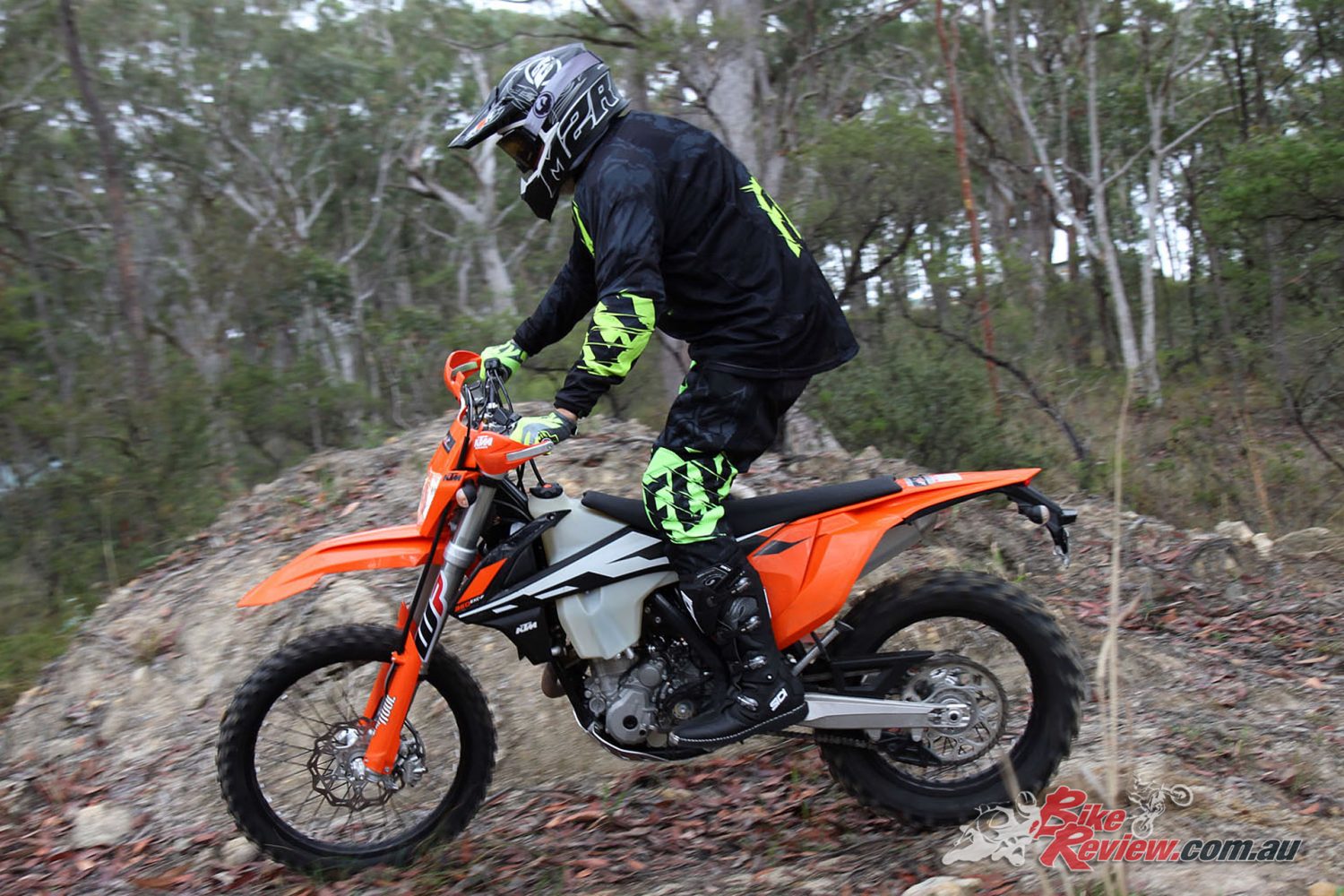 Mark Stenberg gets the Long Term KTM 350 EXC-F back with the KTM Power Parts fitted and adds a set of Pirelli Scorpion Pros. Here's the full update. Words by Mark Stenberg

Since our last update we’ve fitted new Pirelli Scorpion Pro F.I.M Knobbies, which are excellent! Give me a big bore machine (350cc or bigger) and a new (rear) tyre and I’m in heaven! The bike feels both unstoppable and stable now, with this set of excellent Pirellis.

My experience with the same setup on the 250 is that the new tyre actually has too much grip, meaning the engine falters and much more clutch use is needed for the first couple rides until the tyres start slipping again.

The new KTM Power Parts radiator fan also looks great and has a temperature readout, which is great for OZ, and ensures you won’t get caught out. Or at the very least have a little extra peace of mind. 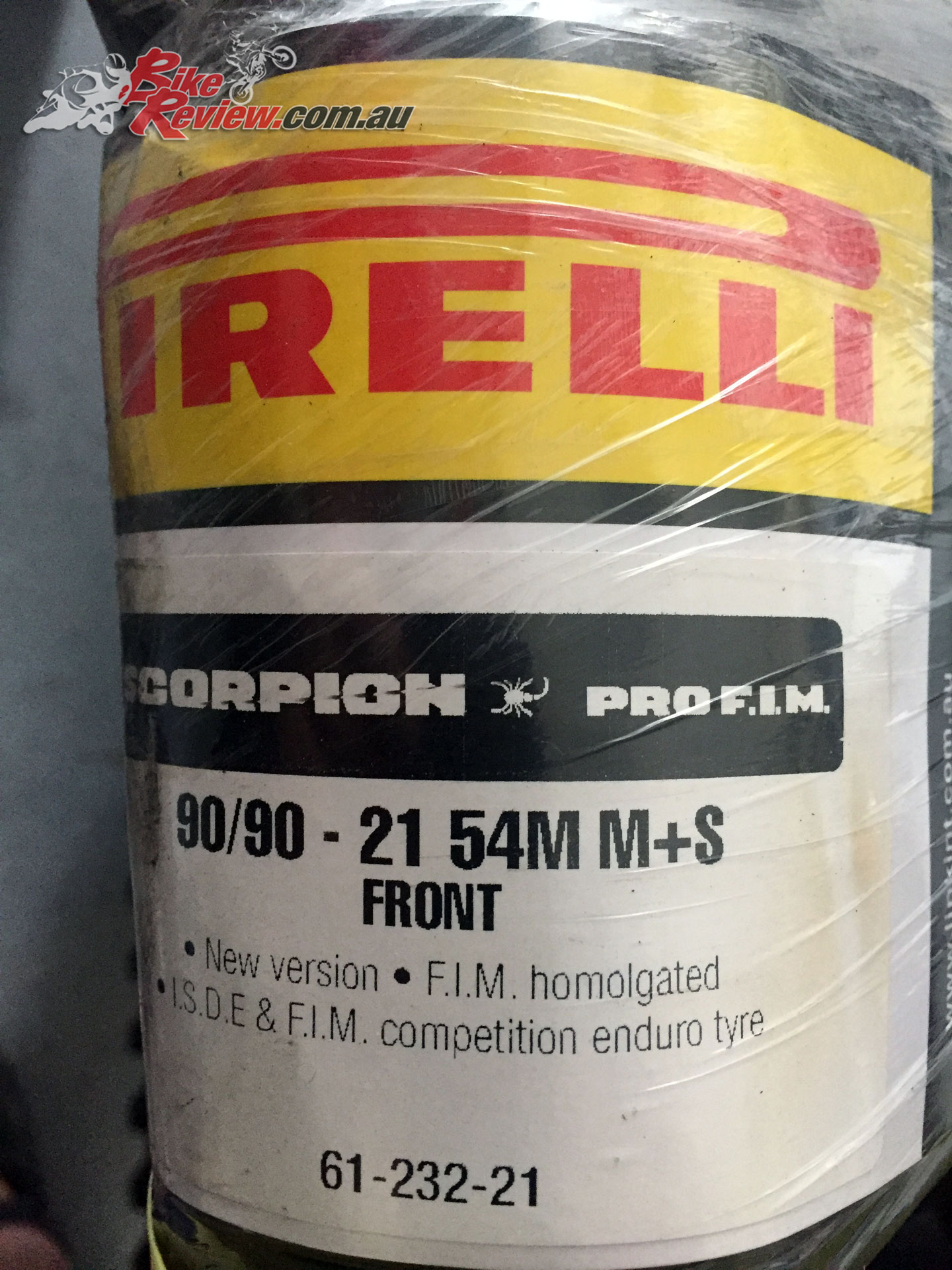 The ADR Rear hanger is still too long however and gets tangled with the rear tyre due to the long travel suspension, which has damaged the number plate even more… My solution was to fit the enduro hanger, and for now more modification in the form of cutting it back, was made.

Also new are the KTM Barkbuster hand guards, which help me feel safer and are even helpful to help prevent scratches and damage to the bike on the rare occasions that crashes occur. 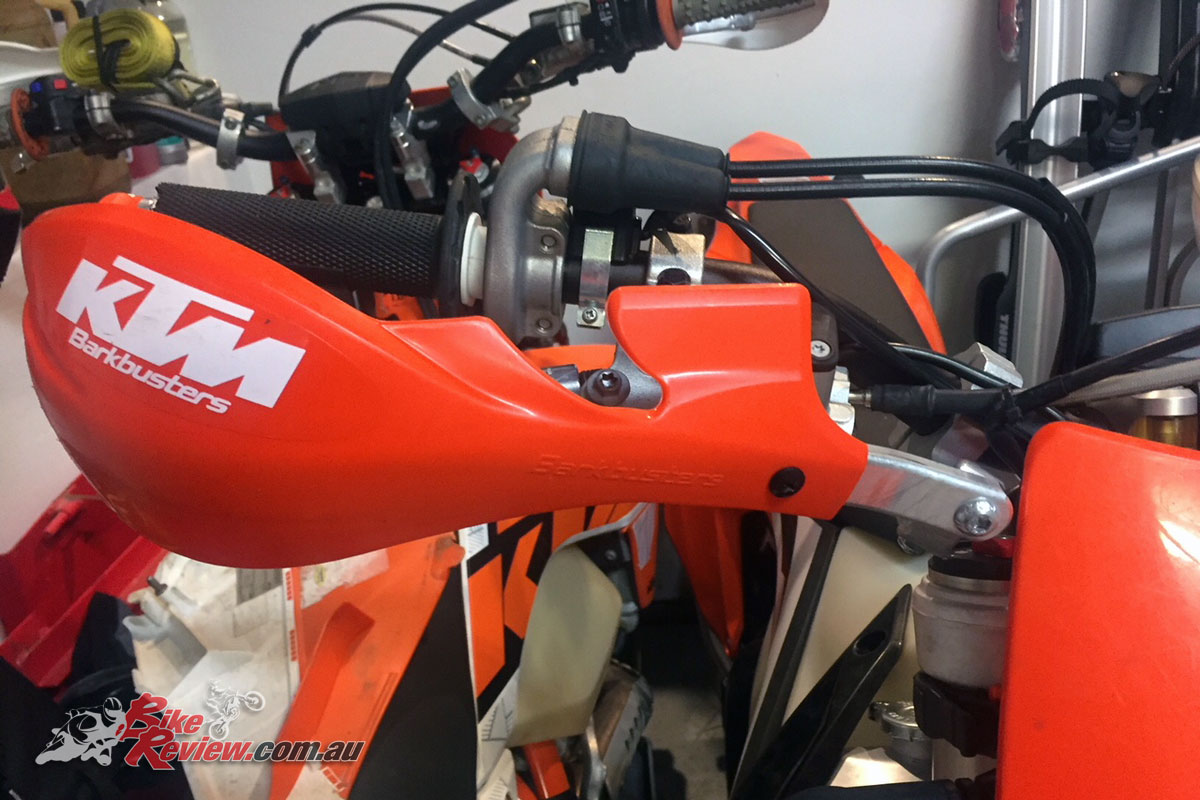 The anti-vibration handlebar brackets are another great addition, and I have suffered from a numb right hand for years while riding. This was especially true during my 2015 Simpson Desert Crossing with Darryl Beattie, which included 400km Mt Dare to Alice on gravel roads in a single day on a CRF450.

Before that even on road bikes I’d have similar issues, including some 20 plus rides to Phillip Island for the MotoGP or WSBK pilgrimages. The right hand does a lot of work controlling throttle and front brakes, so it was always a major issue. 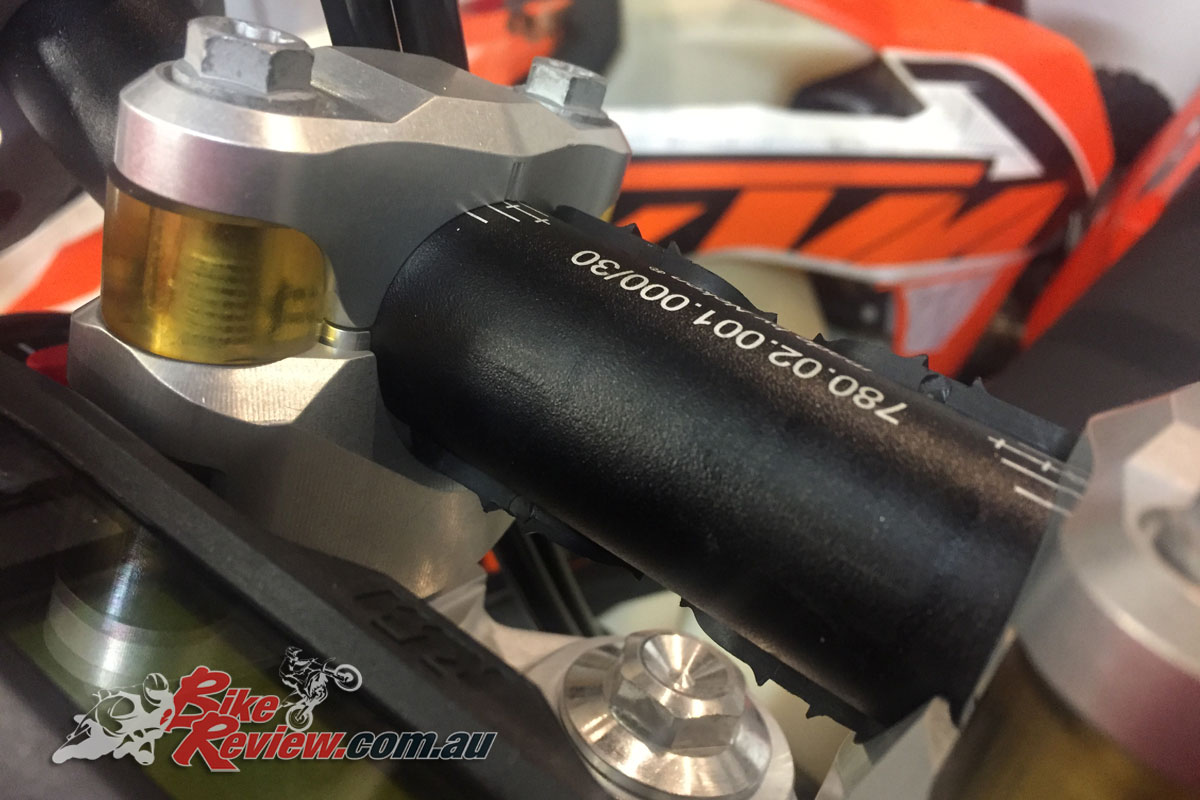 Voila, last Saturday with a 48km test ride and the new anti-vibration mounts, there was no numbness! I’ll be trying again next week to ensure they really are helping.

Jeff’s prognosis about the non-starting issue being the offside kill switch also seems correct as no further issues were experienced. We removed the standard R/H kill switch previously to see if this solved the issue, and it’s a simple matter of removing the switch and reconnecting the cables that it intercepted. 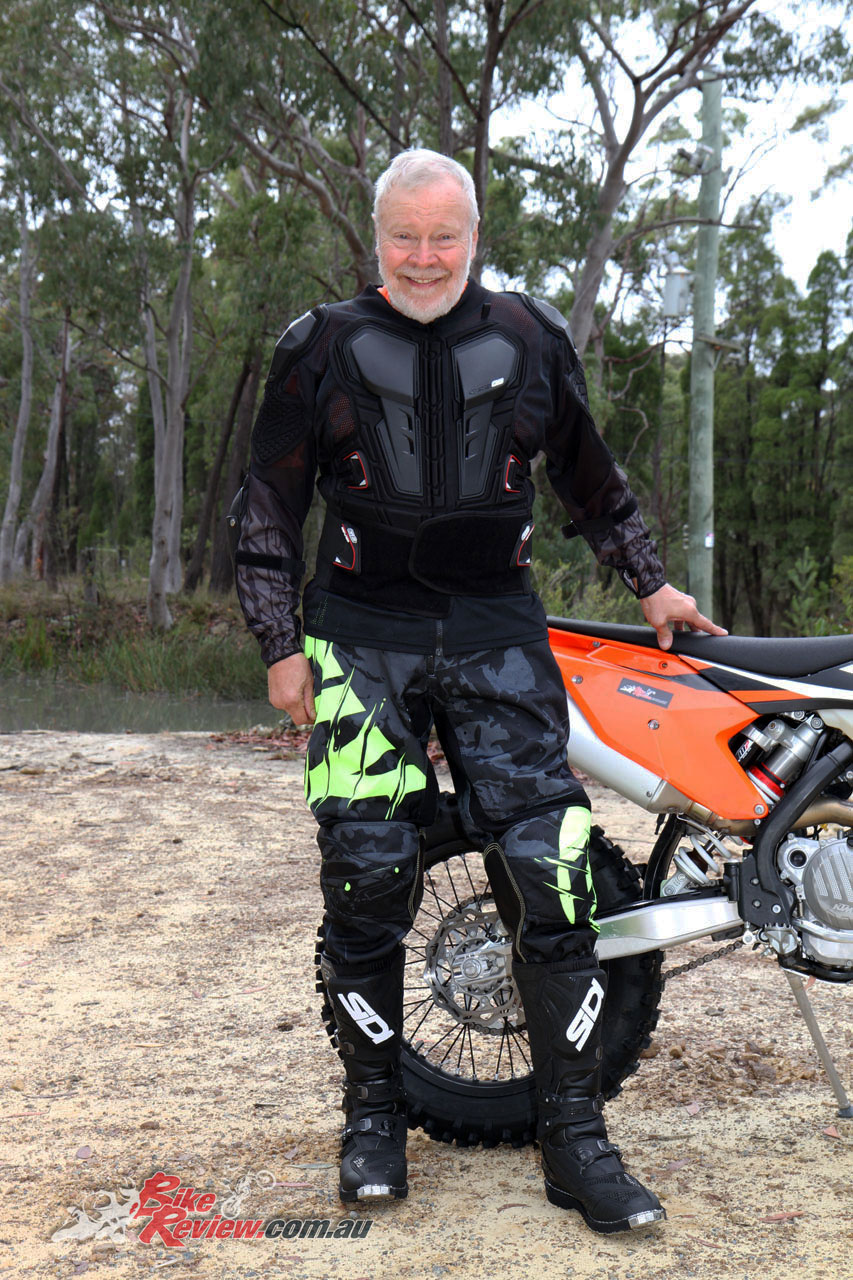 In the saddle the KTM 350 EXC-F now feels nimble and turns very well. The handlebars also feel even better with the 10mm risers, which allow easy standing and enough room and leverage to not feel like you are going to endo over the ‘bars on sudden stops.

The suspension now is spot on too, following the adjustments made by Jeff, Pommie and I.

Seat of the pants dyno would say that power is close to the 2014 350 model fitted with an aftermarket exhaust. In fact if this was my bike, that modification would be on the list for more power, which while strictly not needed would add a lovely exhaust note. 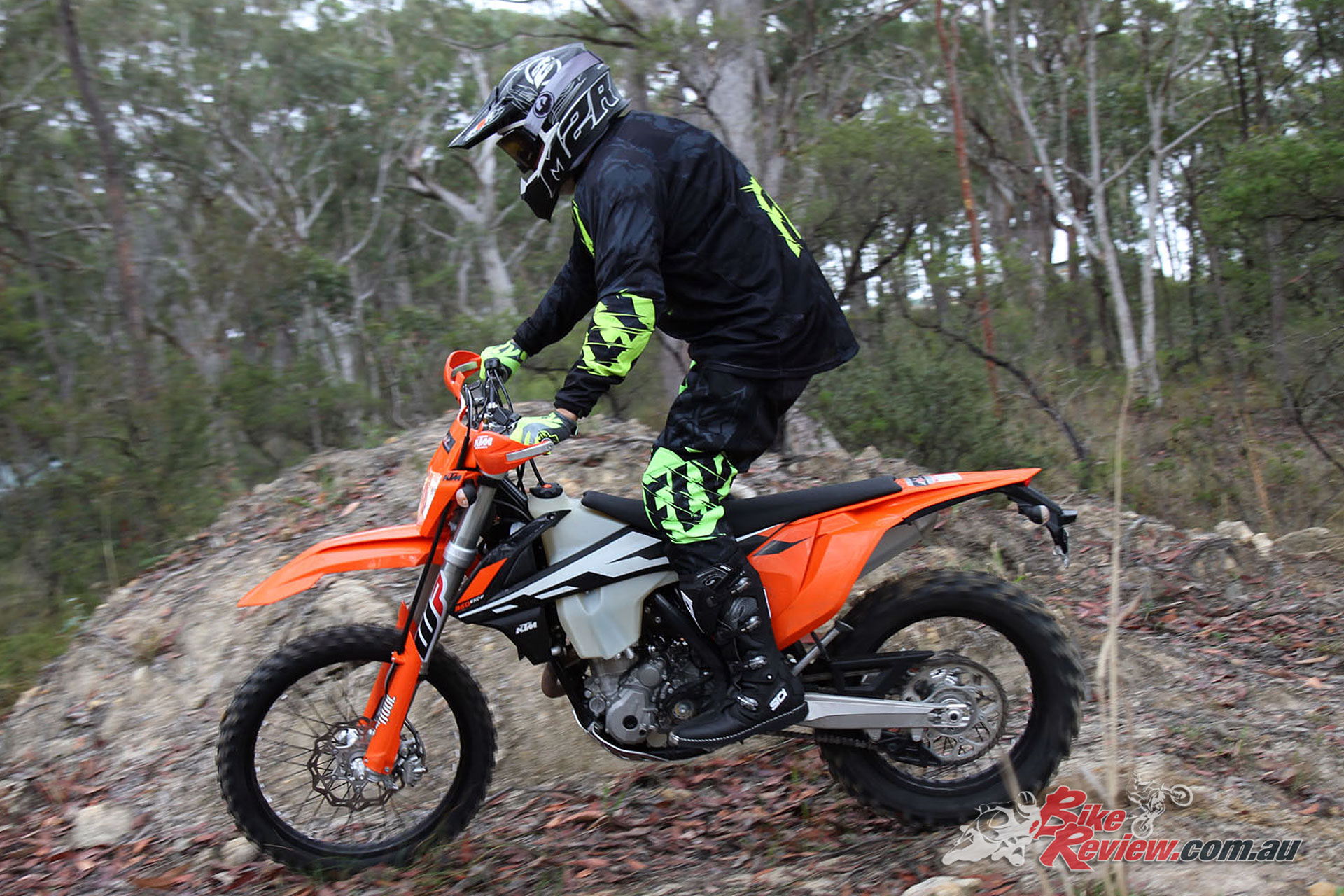 The Pub Test or in this case the ‘Garage Test’ is passed with flying colours as even full of fuel, the bike feels light and easy to manoeuvre off the bike, even with the slightly higher handlebars. Our Long Term 350 EXC-F is now near perfect for a trail rider like me, although Toby Price may want different things!

With that said, there’s still a few modifications, accessories and options that remain on my wish list, including radiator guards, straps front and rear, Moose tubes, a fuel filler sock, and of course the previously mentioned FMF Exhaust. Who doesn’t want a bit more power and volume afterall? 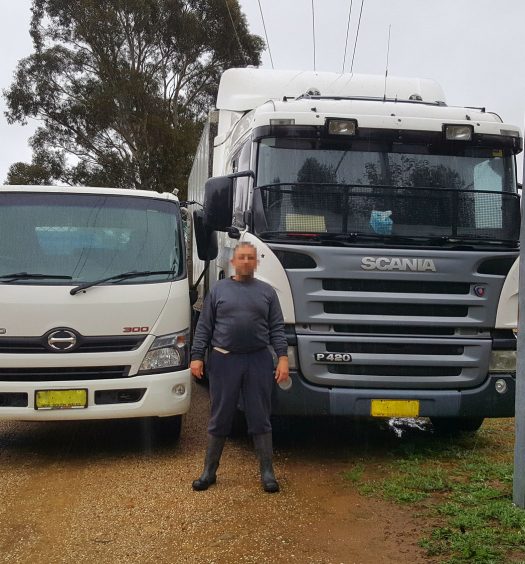 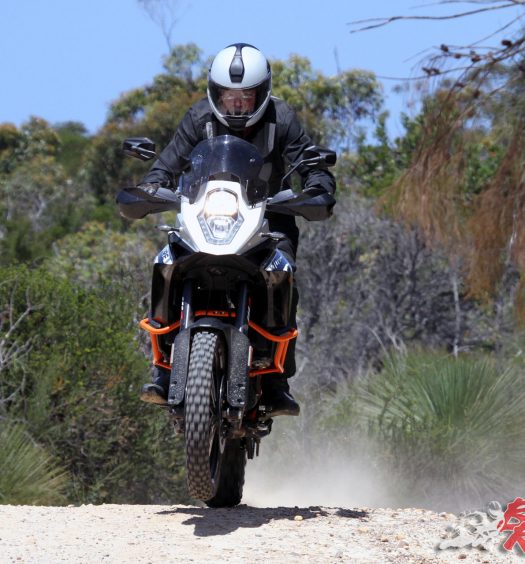