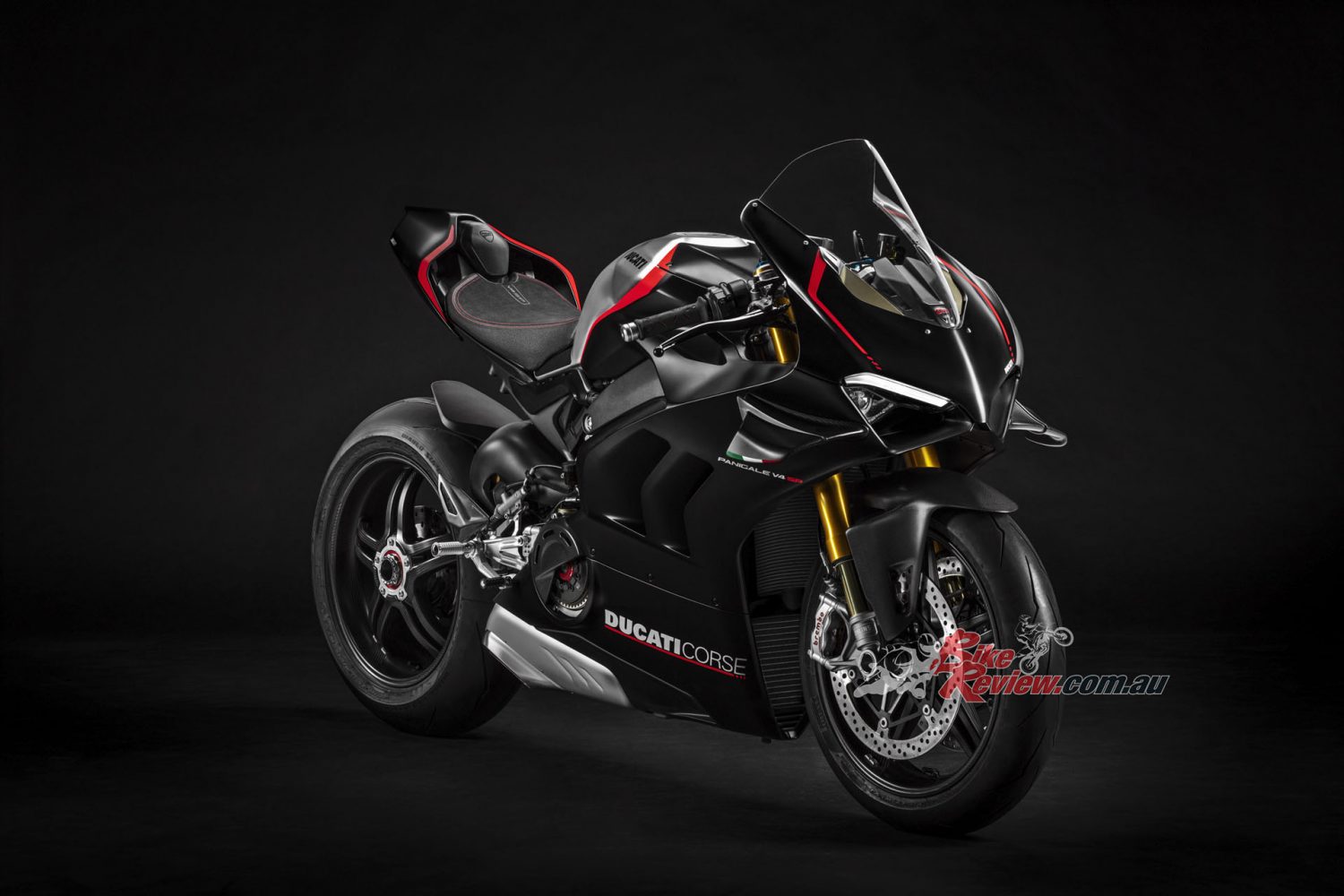 Ducati continues to unveil its new 2021 models with the World Première web series. This week we run the updates to the 950 SuperSport and the Panigale V4 SP.......

Ducati have unveiled the new 2021 models of their sportsbike range with the SuperSport 950, the new Panigale V4 SP and updates for the Panigale V4. The SuperSport 950 has revised aesthetics and electronics, which they say is ideal people who are new to Ducati. 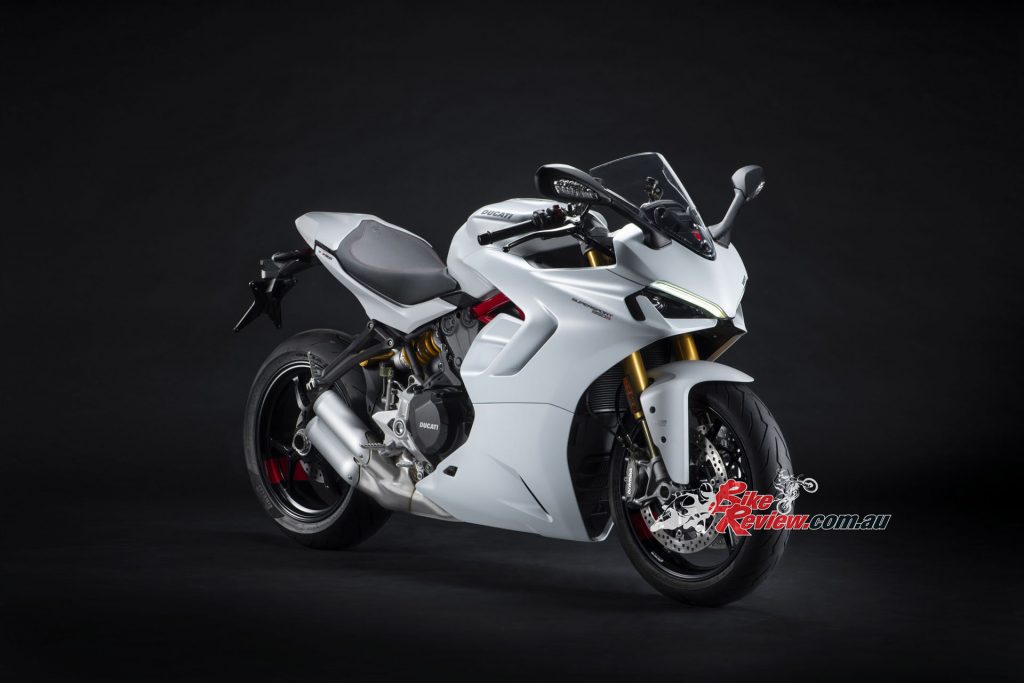 Ducati claim the SuperSport 950 is the right bike to bring sporty riding into everyday life, without having to compromise in terms of comfort. For 2021, the model has been revised in design, enriched with electronic equipment and gear, as well as becoming compliant with the Euro 5 anti-pollution laws.

The family aesthetic link between SuperSport 950 and Panigale V4 is now even stronger. The front view is defined by the new full-LED headlight supported by two fins and two air intakes that widen the view. The day time running light echos the front end of the Panigale V4 thanks to a refined lens that diffuses the light evenly. The air vents coming from the water radiator have been inspired by the double extractor of the Panigale V4 models. 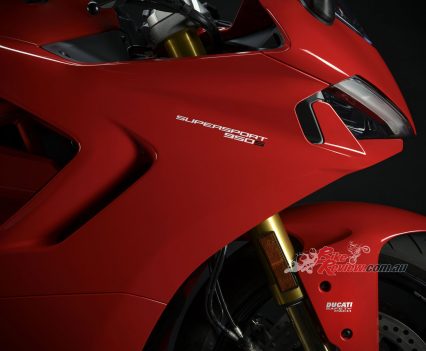 The fairing is meant to echo the larger Panigale V4. 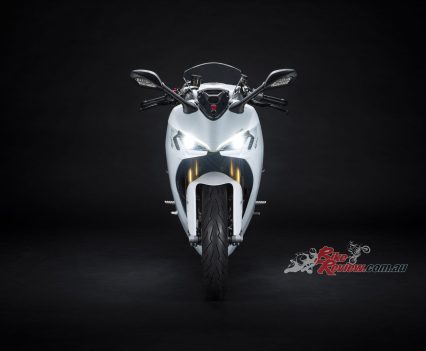 The SuperSport 950 has a single-sided swingarm, a trellis frame fixed to the engine that acts as a stressed element to reduce weight and bulk, ergonomics with raised handlebars for a claimed greater control of the bike even with the passenger, a revised seat to maximise rider comfort through greater longitudinal usability, multi-adjustable suspension, three-spoke “Y” aluminium wheels with Pirelli Diablo Rosso II tyres, radial master-cylinders for brake and clutch and high-performance Brembo braking system with double 320mm disc’s for a dry weight of 184kg.

Electronics is one of the areas most affected by the updates of the new SuperSport 950, equipped with electronic controls based on information from Bosch’s 6-axis inertial platform, which they claim is capable of instantly detecting roll, yaw and pitch angle of the motorcycle. The electronic package consists of Cornering ABS, Traction Control, Wheelie Control and Electronic Shifting. The adjustment of the electronic settings, as well as the Riding Modes (Sport, Touring, Urban) are all done through the menu on the 4.3’in TFT display with an interface that Ducati say is inspired by that of the Panigale. 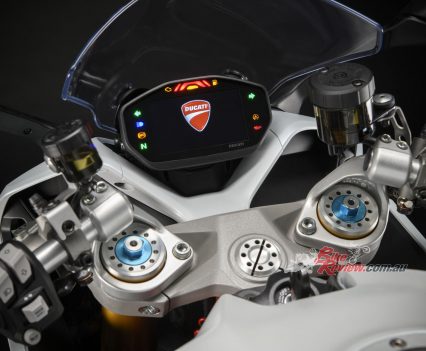 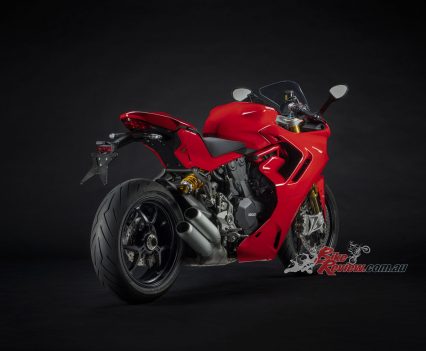 The SuperSport 950 is available in red and, for those who want a more refined chassis, the S version is available in “Ducati Red” and “Arctic White Silk” which is equipped with fully adjustable Öhlins suspension and passenger seat cover. Both will be available in Ducati dealers from February 2021. 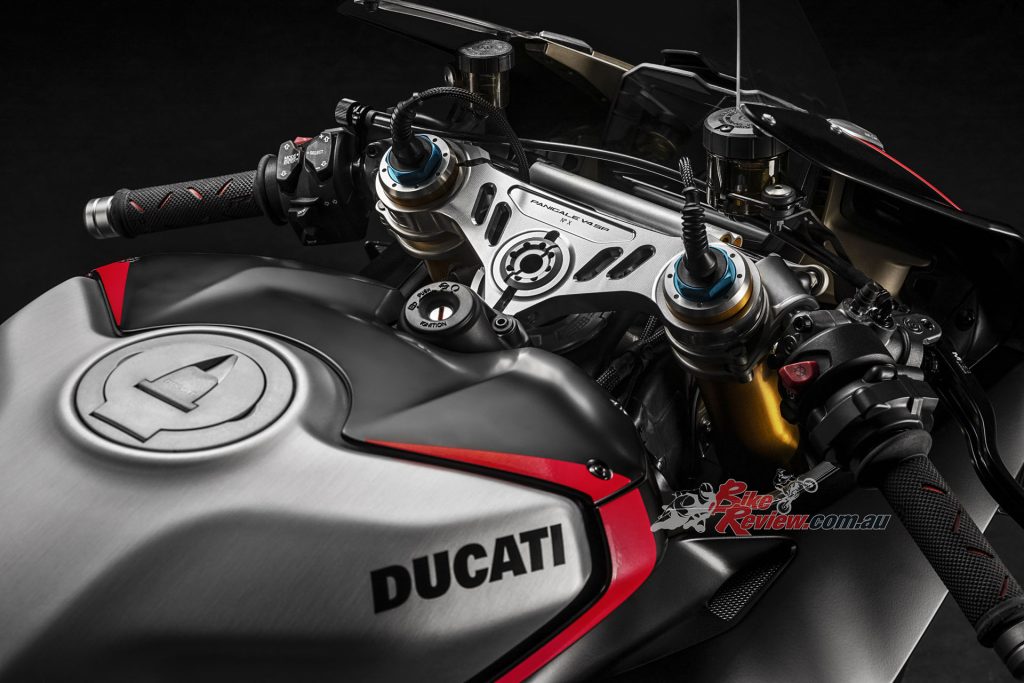 Ducati say the Panigale V4 is the sporting Ducati par excellence derived directly from MotoGP and, like racing bikes, is constantly being innovated and improved from year to year. For 2021 the Panigale V4 and V4 S models they have become compliant with the Euro 5 homologation regulations for the countries that require them, while maintaining weight, maximum power and torque levels unchanged.

The electronic package that is on the Panigale V4 has evolved and now includes the latest generation Ducati Traction Control EVO 3 with a strategy derived from Ducati Corse. The Riding Mode strategy is has been split into two distinct mappings for the race mode, allowing the rider to have two different configurations to define the best set-up based on the track and their riding style. 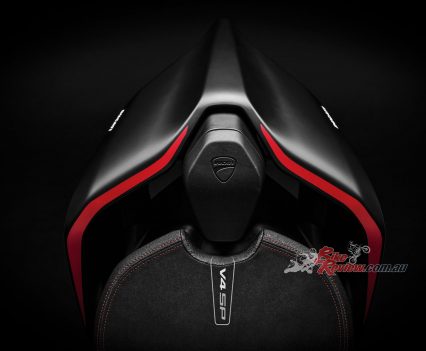 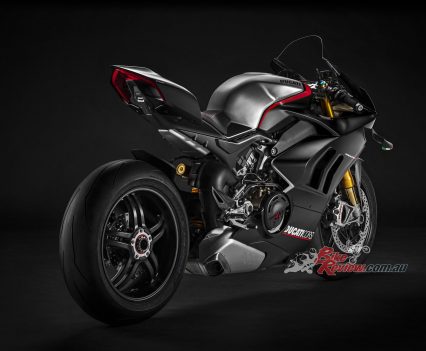 The Panigale V4 SP is sporting 214hp, 123.5Nm and a dry weight of 173kg.  It will include a dedicated livery and Ducati say it is equipped with all the technical features to enhance its qualities in track use. Many elements derive from the Superleggera V4 like its carbon rims, brake calipers and master-cylinders, dry clutch and the same chain size. 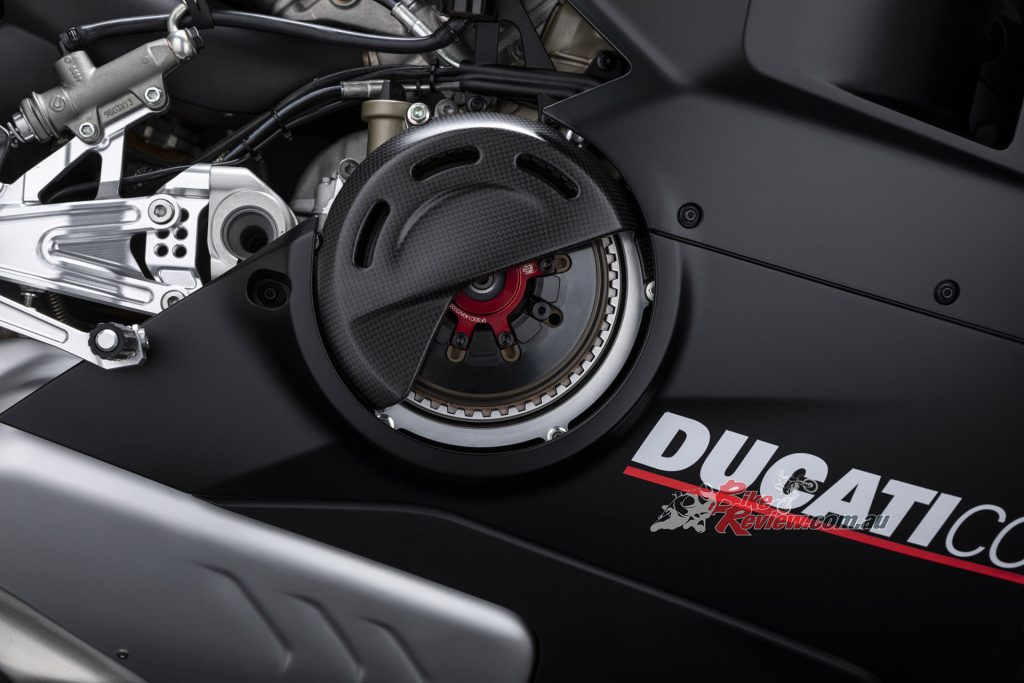 The open dry clutch gives the V4SP an aggressive look

Ducati say the most important component for the improvement of the dynamic qualities are the 5 split-spoke carbon rims, 1.4kg lighter than the forged aluminium ones of the Panigale V4 S which reduce rolling inertia, making the bike significantly more agile and light in changes of direction.

The Brembo Stylema R front brake calipers claim to ensure high braking power, as well as consistency of performance even during a long timed session without changes to the brake lever stroke. The calipers are activated by a Brembo MCS radial pump, which allows for rapid adjustment of the braking feeling to suit the rider’s needs. 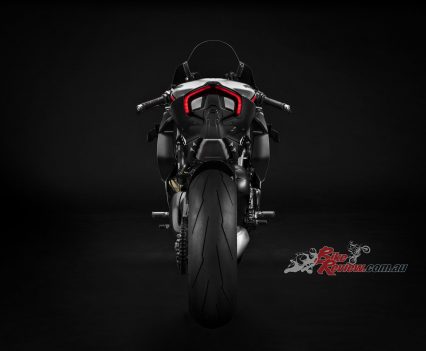 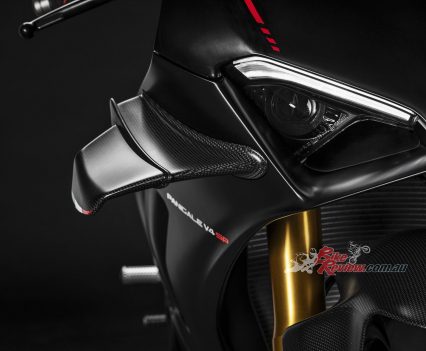 The Desmosedici Stradale of the “SP” has a dry clutch, which Ducati say allows it to be even more effective on the track when riding to the limit, and is coupled to a final drive with 520 chain, narrower and therefore lighter than the one fitted to the Panigale V4 S.

The Rizoma anodized aluminium footpegs mounted on the Panigale V4 SP are fully adjustable to adapt to the ergonomics of each rider and change ground clearance for use on the track. The bike is also equipped with a racing kit for track use that allows the removal of the rear-view mirrors, license plate holder, open clutch cover and includes the Ducati Data Analyser with GPS module. 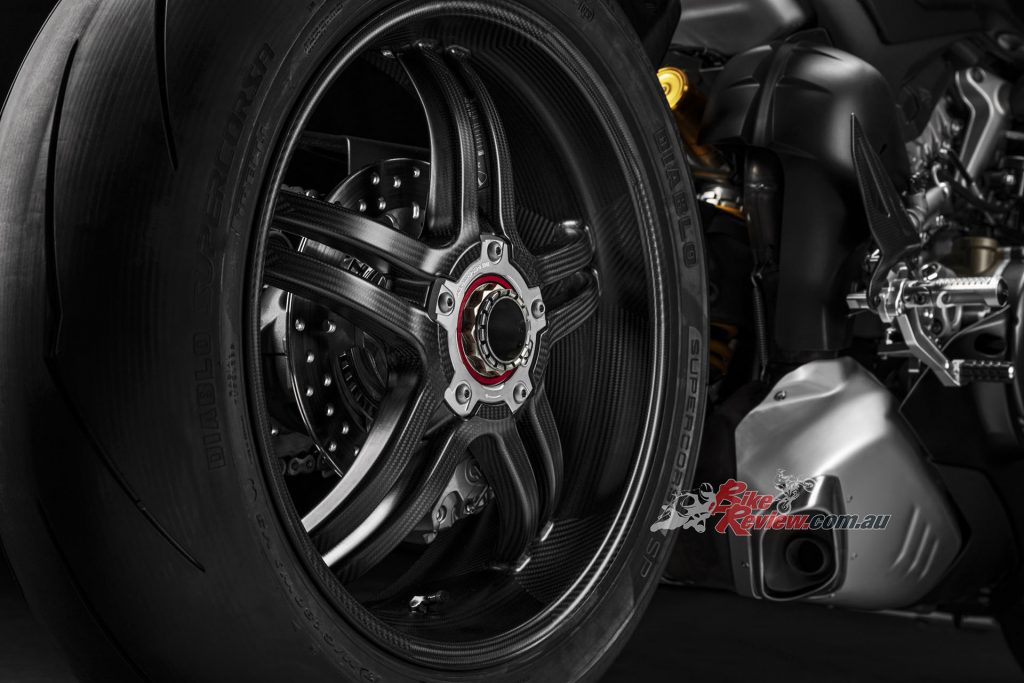 The look of the Panigale V4 SP comes with inspiration from the fairing used during winter MotoGP tests.

Ducati say the livery of the Panigale V4 SP is inspired by the one used in the winter tests by the official MotoGP and Superbike teams, reworked by the Ducati Style Centre. The fuel tank is in exposed aluminium, the fairings are matt black enriched with fluorescent red details and carbon components, such as the front mudguard and wings. 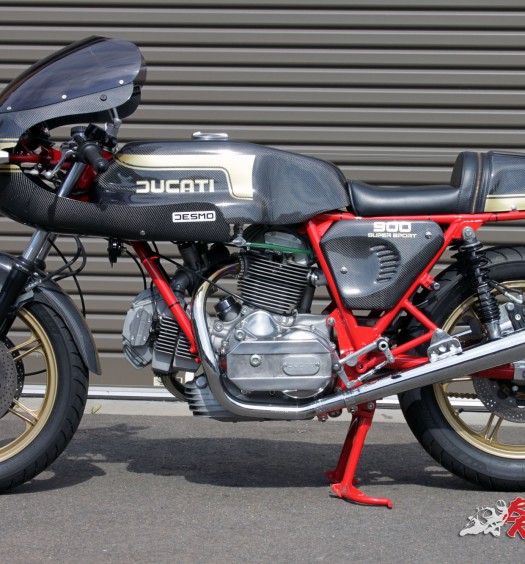 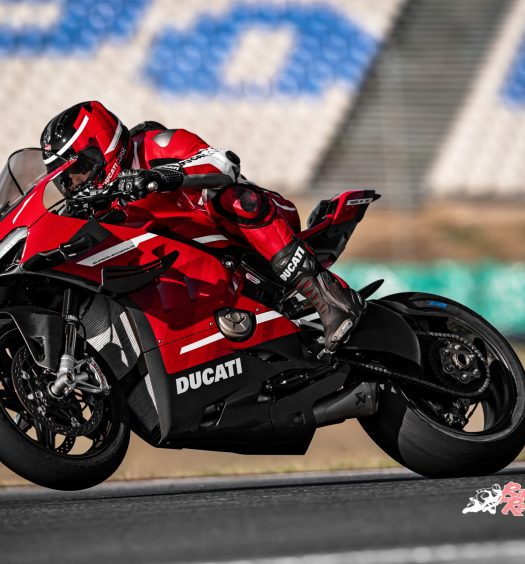