The Kawasaki Z900RS not only looks cool, it handles and goes as good as it looks... Video Review: Jeff Ware Photography: Heather Ware HMC Photography...

It’s only late February and here at BikeReview we have already tested, filmed and photographed over a dozen new models since we returned to work mid January. Just about all of them have been impressive but one stands out. In fact, just about every motorcycle journalist that has ridden the Z900RS is raving about it and for good reason.

This is one of those special bikes that only comes along every few years. Kawasaki have got it spot on. At least, we reckon they have…

Check out our quick video review of the bike. The full review will be published on Friday with a big surprise! Also, check out the history of the original Z1 here in this great article by Mick Withers. 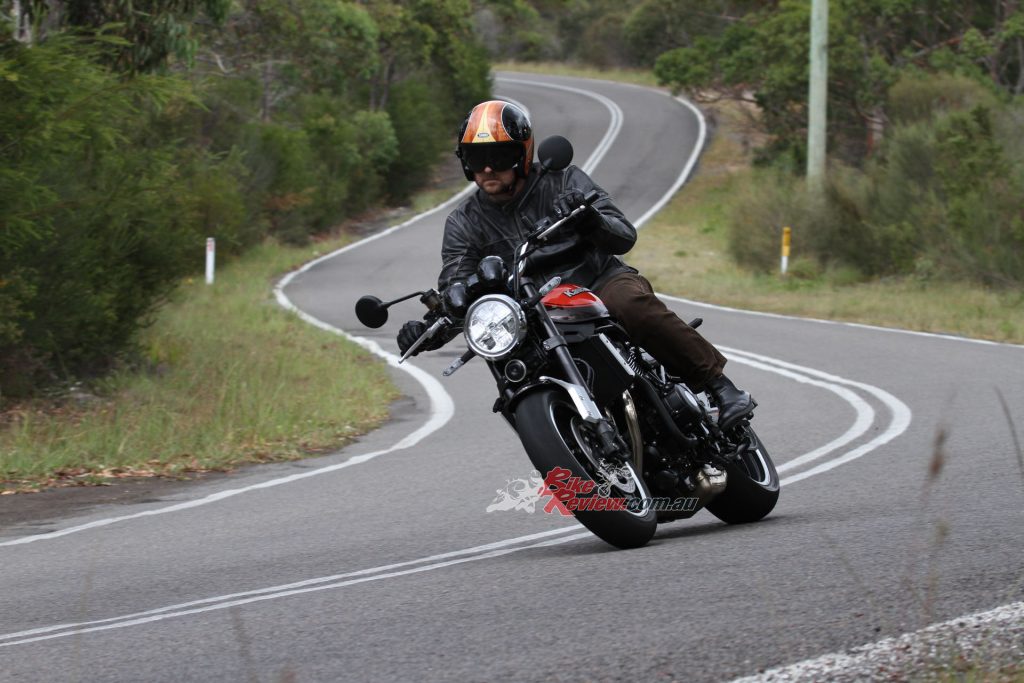 Kawasaki’s Z900RS features the same liquid-cooled 948cc in-line four-cylinder four-stroke 16-valve powerplant as the Z900, with a bore and stroke of 73.4 x 56mm. The engine features revised camshaft profiles and timing, along with a reduced compression ratio (10.8:1 v 11.8:1) to aid a wide-spread power curve. Downdraft throttle-bodies are used, with a 36mm throttle bore and sub-throttles, for sensitive throttle response and good low speed and small throttle opening response. 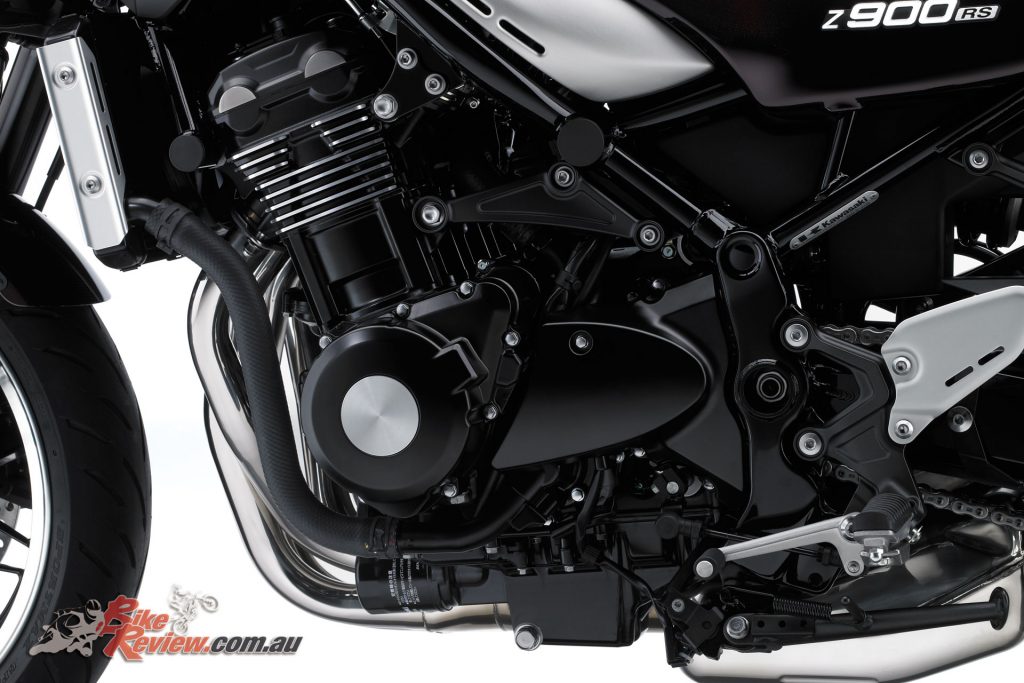 Intake and exhaust valves are 29mm and 24mm respectively, with cast pistons manufactured with the same technique and materials used in the H2R, while cylinders are die-cast and feature an open-deck design. A secondary balancer eliminating excess vibration and a heavier flywheel helps (12%).

Intake funnels help deliver both performance and a strong intake sound or ‘howl’ on aggressive throttle openings and acceleration. The exhaust is a tuned four-into-one that actually has fake outer tubes to give the bike a tougher look. The outer tubes are 38.1mm, while the inner tubes are 28.6mm to increase mid-range. The Z900 headers are 35mm. 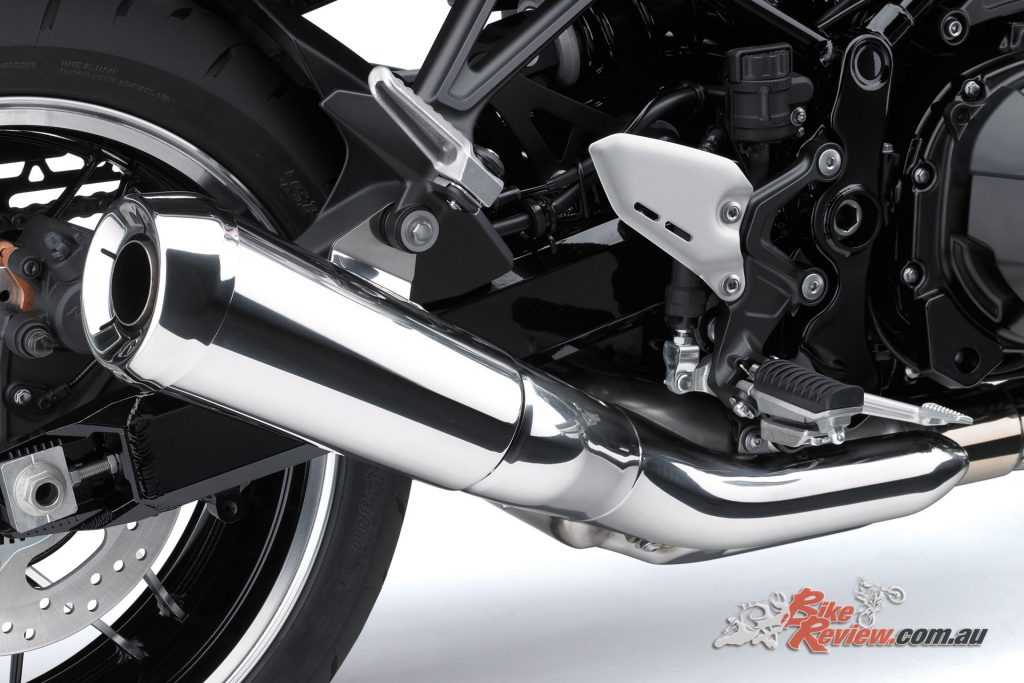 Over 20 variations of the exhaust were considered before the final one was chosen. The exhaust pre chamber is specifically designed to give a nice rumble at idle, on start up and low speed when the rider can hear it. The gasses essentially escape through a straight line but as rpm increases, thus gasflow, the exhaust gasses are routed via a muffler to keep sound level legal. Pretty smart thinking!

Short gear ratios from first to fifth and a sixth gear overdrive ensure a strong and punchy mid-range, without losing highway cruising capability. First gear is shorter than on the Z900 by one tooth on the drive gear, while a longer top gear (30/29 – 29/30) enables lower rpm at highway speeds. Final gearing is also taller than the Z900 (two teeth down on the back). An assist and slipper clutch is also featured. 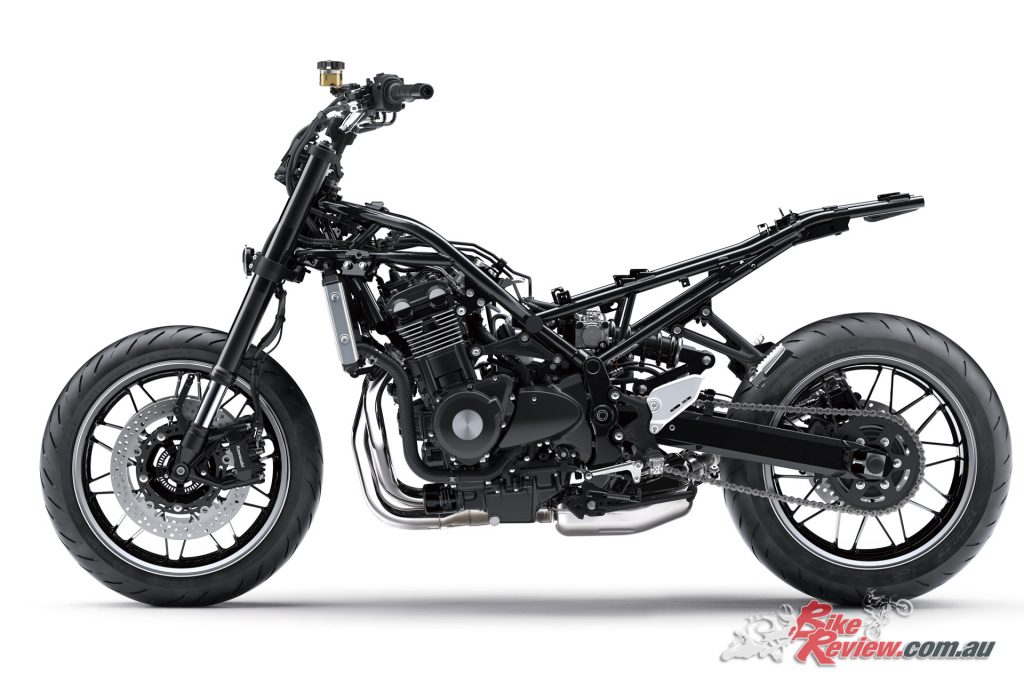 The Z900 high-tensile steel trellis frame design is retained, and uses five rigid-mount points with the engine as a stressed member, but was completely redesigned to accommodate the teardrop tank. To give the bike a flatter more upright stance the front was raised and the rear lowered. Steering offset is increased by 6mm, interestingly reducing trail, in this case helping make the steering lighter.

An extruded aluminium swingarm weighs just 3.9kg and the sub-frame is a twin-tube design, which like the frame itself has been designed to follow straight lines, with as small bend angles as possible, for optimised stress dispersal. 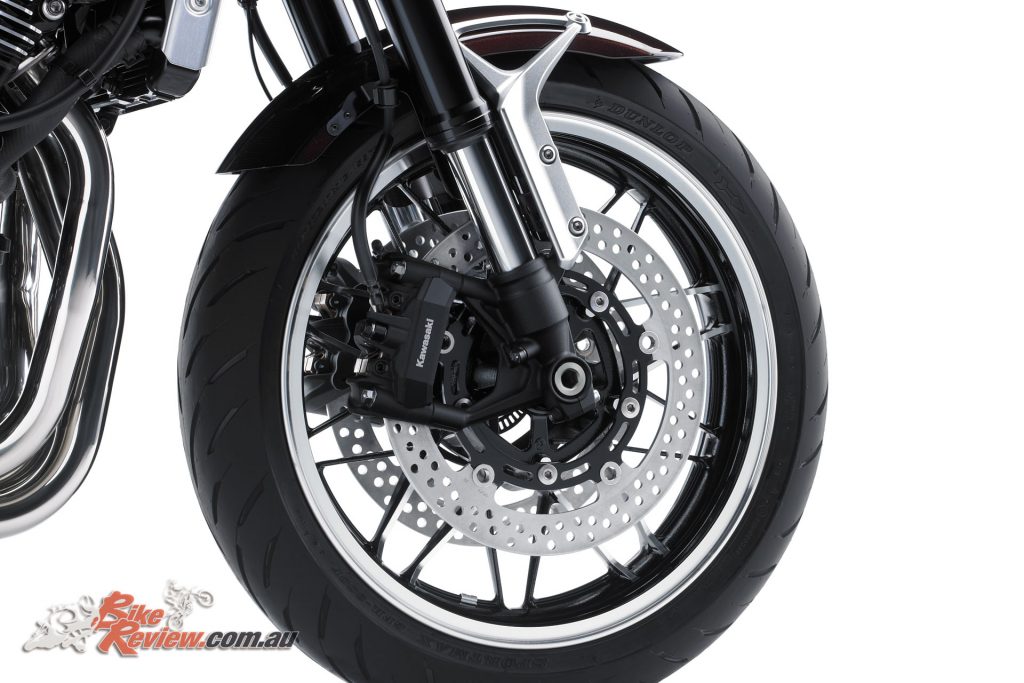 Brakes are four-piston monoblock radial-mount calipers with sintered brake pads on the front, with 300mm rotors, while the rear is a 250mm rotor with single-piston caliper. ABS is standard thanks to a Nissin unit and the master-cylinder is a radial-pump item. The wheels are flat spoke cast alloy items.

A stacked dash is also featured, with an LCD central screen, surrounded by an analogue-style tachometer, while the Kawasaki ‘Economical Riding Indicator’ lets you know when you’re not using enough throttle and having enough fun. 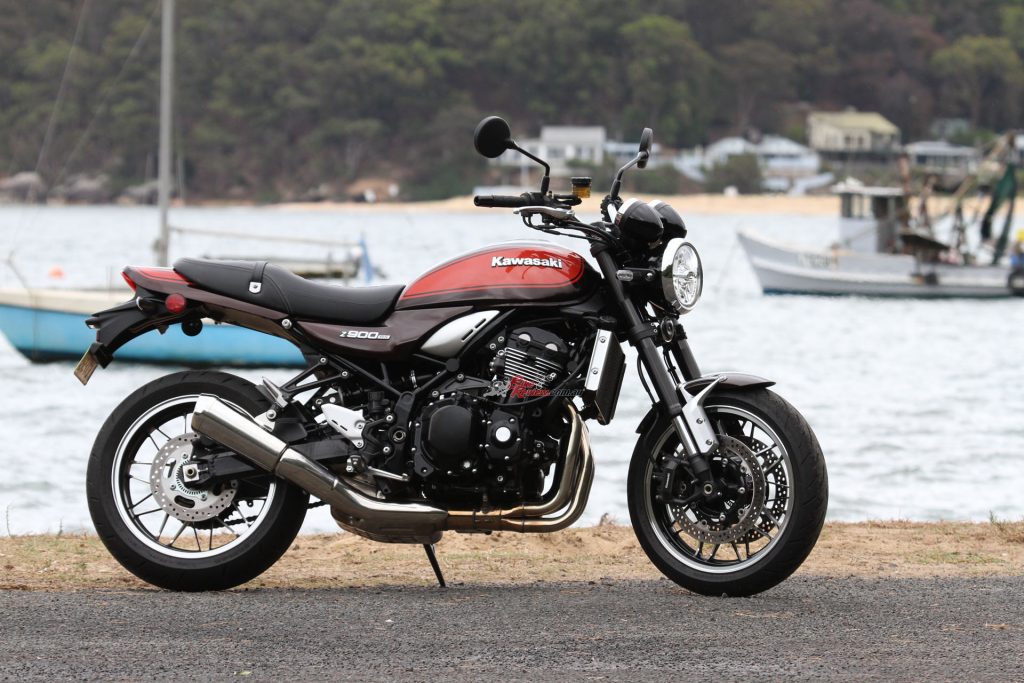 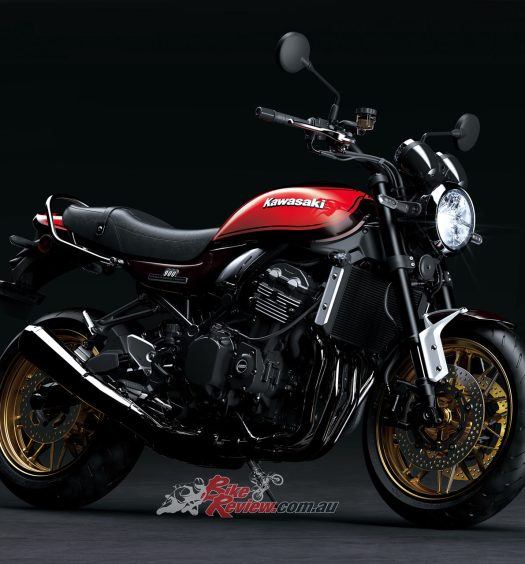 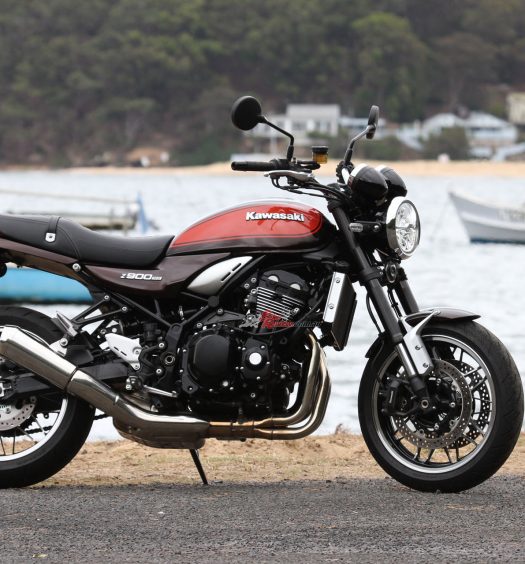