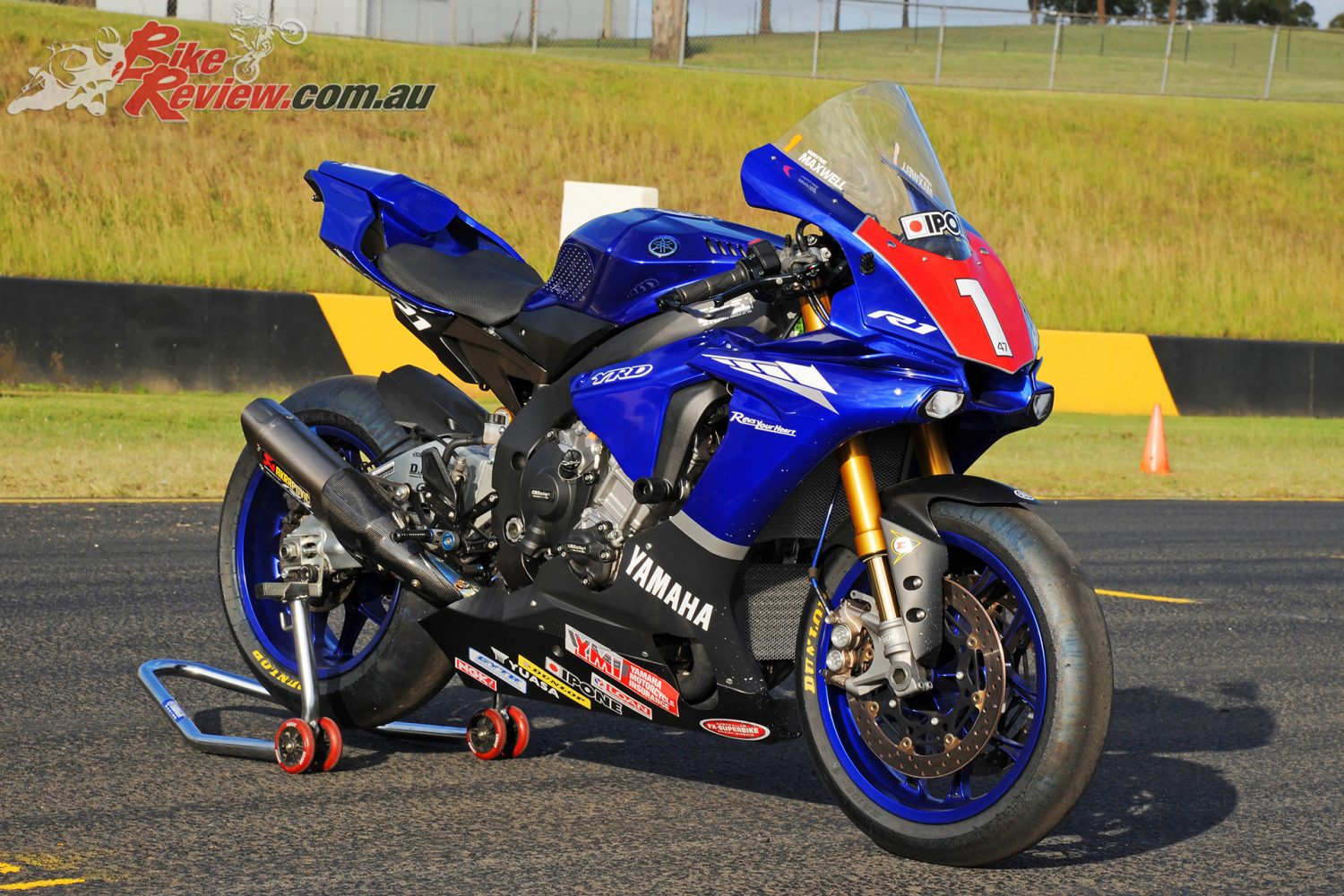 Talking of the move to Yamaha, Maxwell said, ““My decision to come to Yamaha was an easy one as the team produces a great bike, has a good atmosphere and is at the races to win. The new R1 sounds awesome and it’s an honour to be a selected rider to represent such an important bike. My goal is to retain the number 1 plate and I believe I have the team and the bike behind me to do that.” 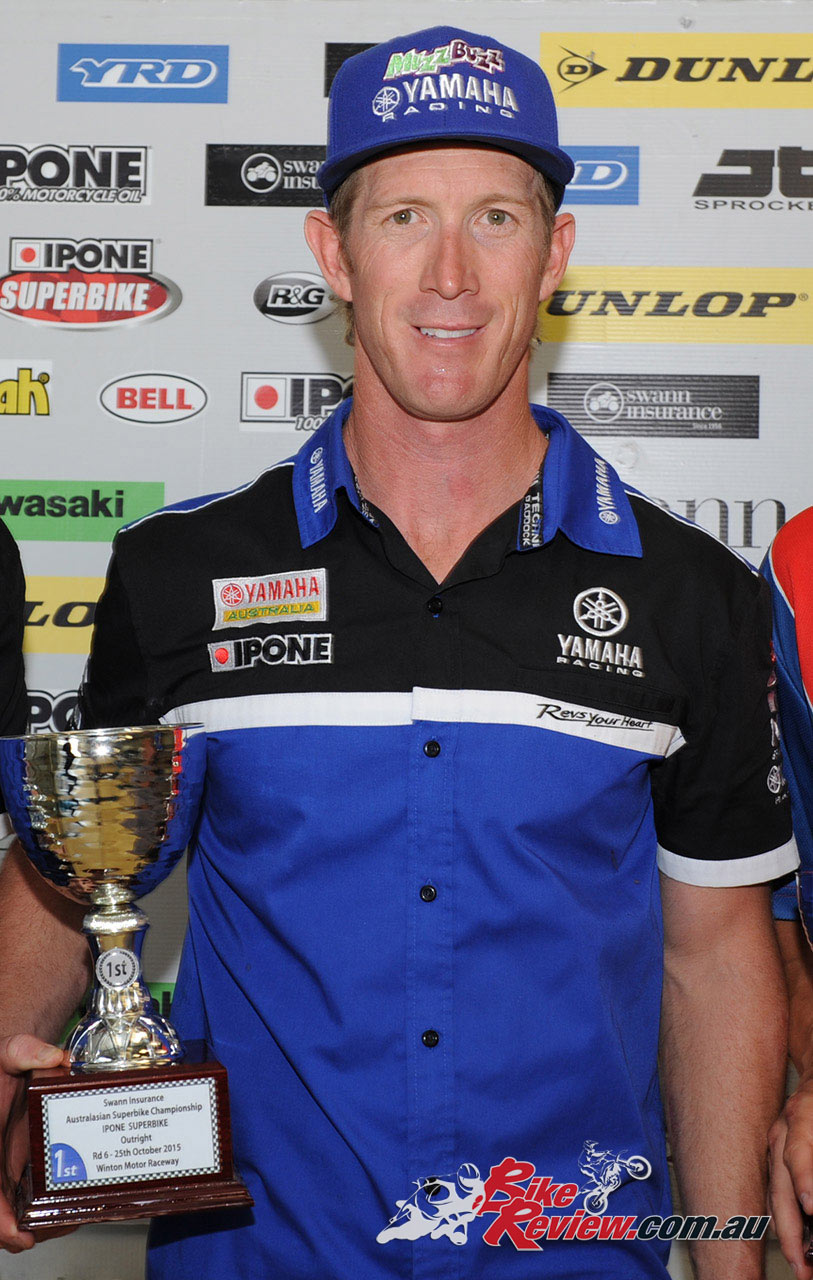 Wayne Maxwell would end the 2015 ASC season in second place missing the top spot by just a single point, and head into the final round of the ASBK Championship in the top spot, before being regulated to third overall, after a DNF result at the final race of the season.

Here’s a look at the machine which Wayne Maxwell competed the 2015 season on, and carried on into the 2016 ASBK season this last year. 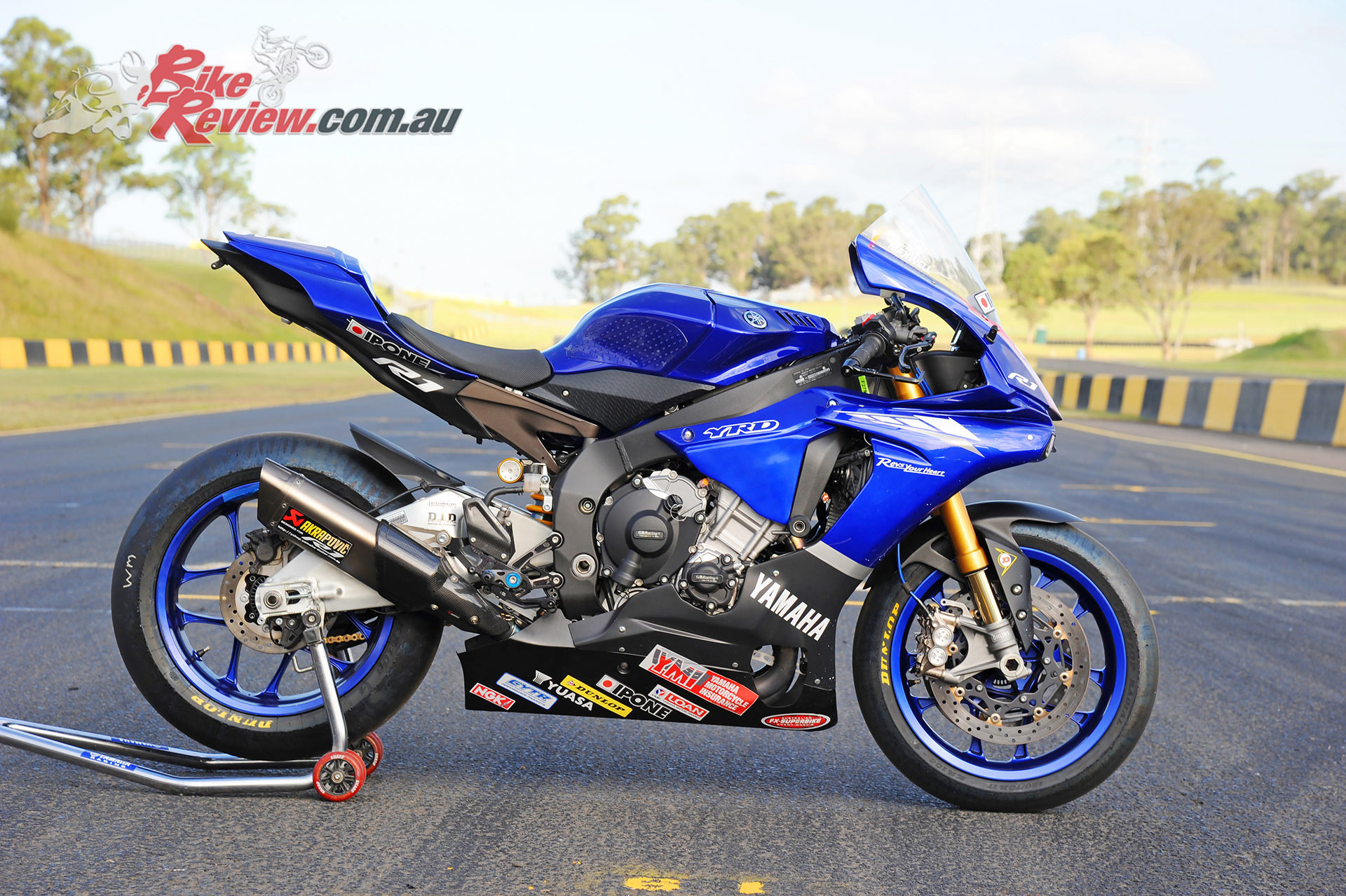 If you read our recent feature on Mike Jones’s championship winning ZX-10R, then you may already be aware that these machines aren’t much different to a regular streetbike or machine purchased straight off the showroom floor, with Wayne Maxwell’s 2015 YZF-R1M no exception.

Starting from scratch, Maxwell’s machinery for the 2015 ASC championship was the newly released YZF-R1M, with the R1 seeing massive changes for the 2015 year model, moving towards a much more race orientated machine.

You can read the full technical specs about the 2015 Yamaha YZF-R1M below. 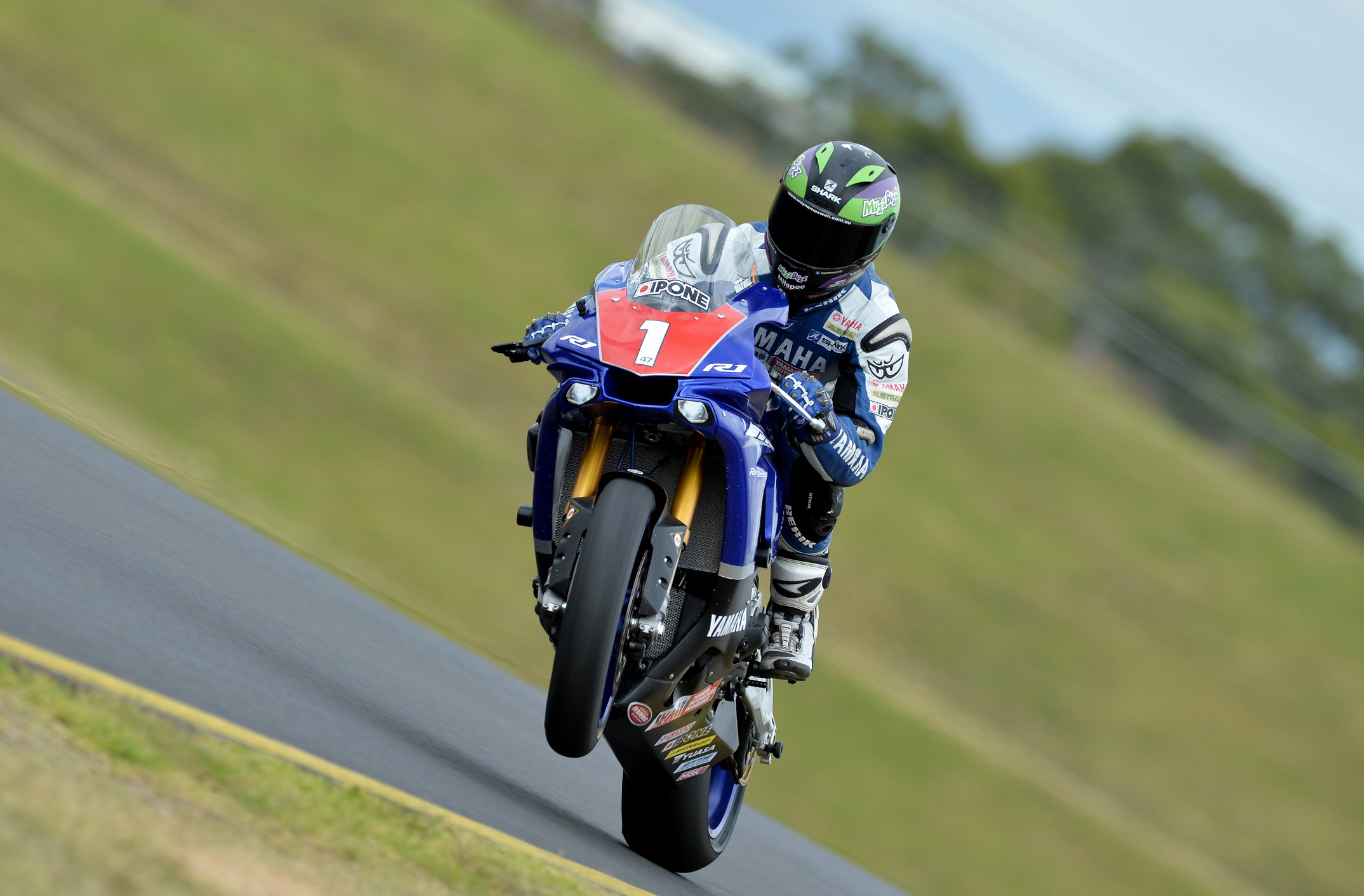 This particular machine is one of the Yamaha Racing Team bikes, and performance modifications are relatively sparse. For the 2015 season the engine was never rebuilt, benefiting only from a DNA airfilter, a set of the Y-Shop Akrapovic four-into-one headers and single race mufflers, and Power Commander.

Tweaks were also made to the R1M’s software, with the tuning undertaken by Kev Marshall with the bike running on BP98. 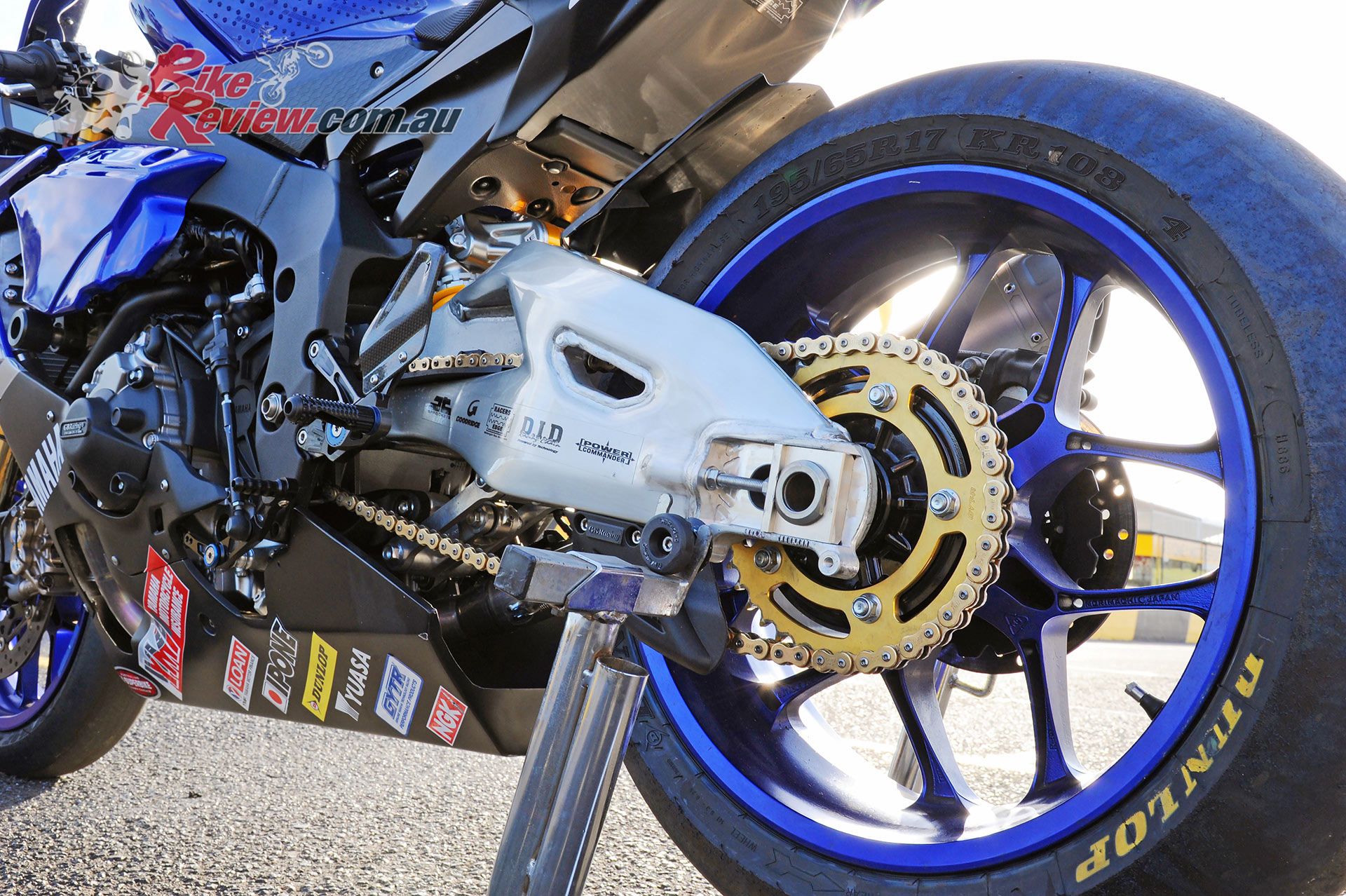 The chain pitch was also reduced down to 520-pitch, with the shift pattern changed to race-shift, with a set of Gillies rearsets fitted. The standard R1M quickshifter was retained, while the team run a variety of gearing depending on the track, with front options of 14-17 tooth, and rear options of 38-45 tooth. 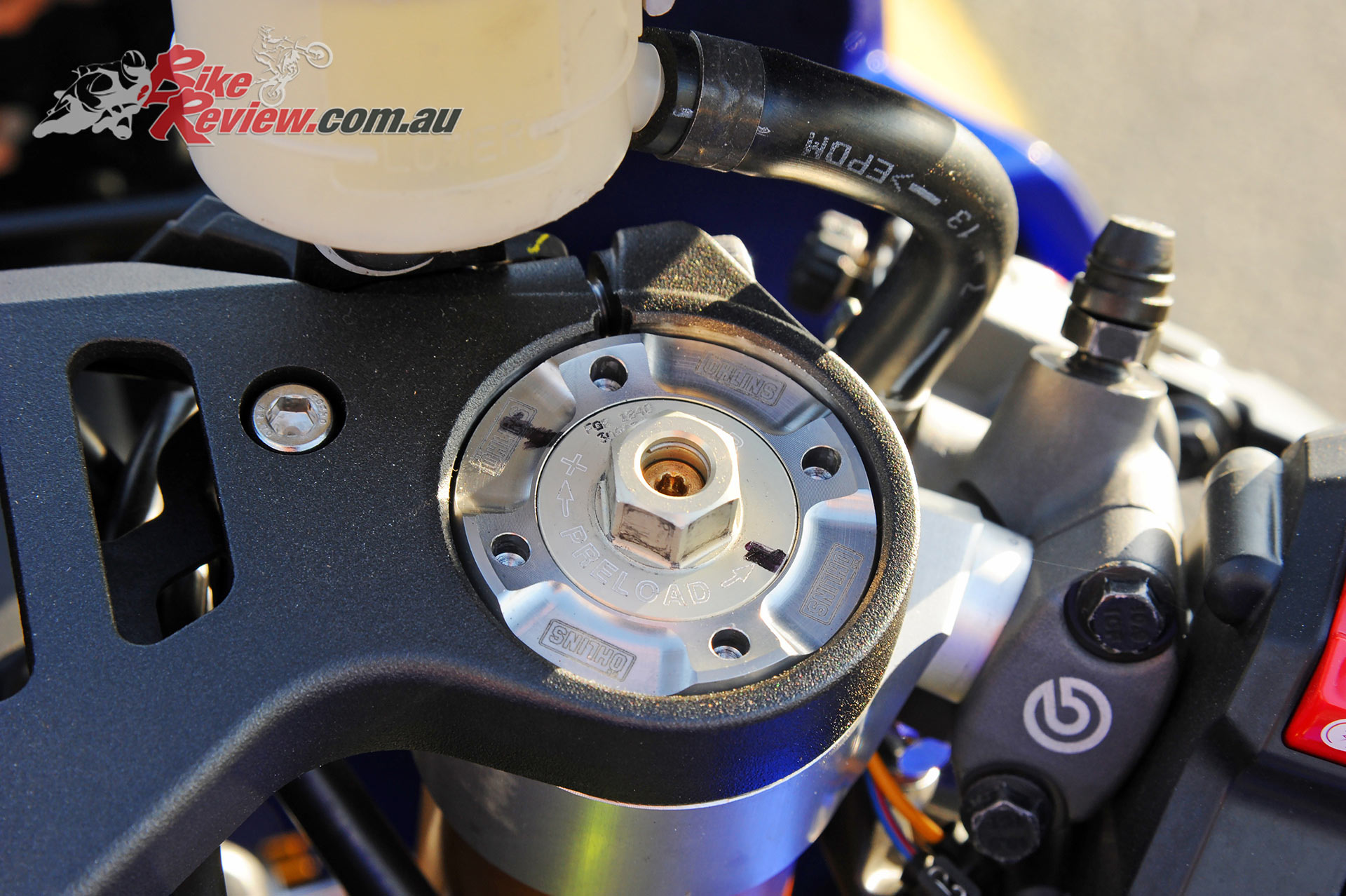 The frame is all standard, while the R1M’s Ohlin’s forks benefit from Ohlins Racing Gas Cartridges and a variety of spring options. The rear shock is a Ohlins TTX item. The YRT racing team don’t make use of the R1M’s semi-active suspension system. 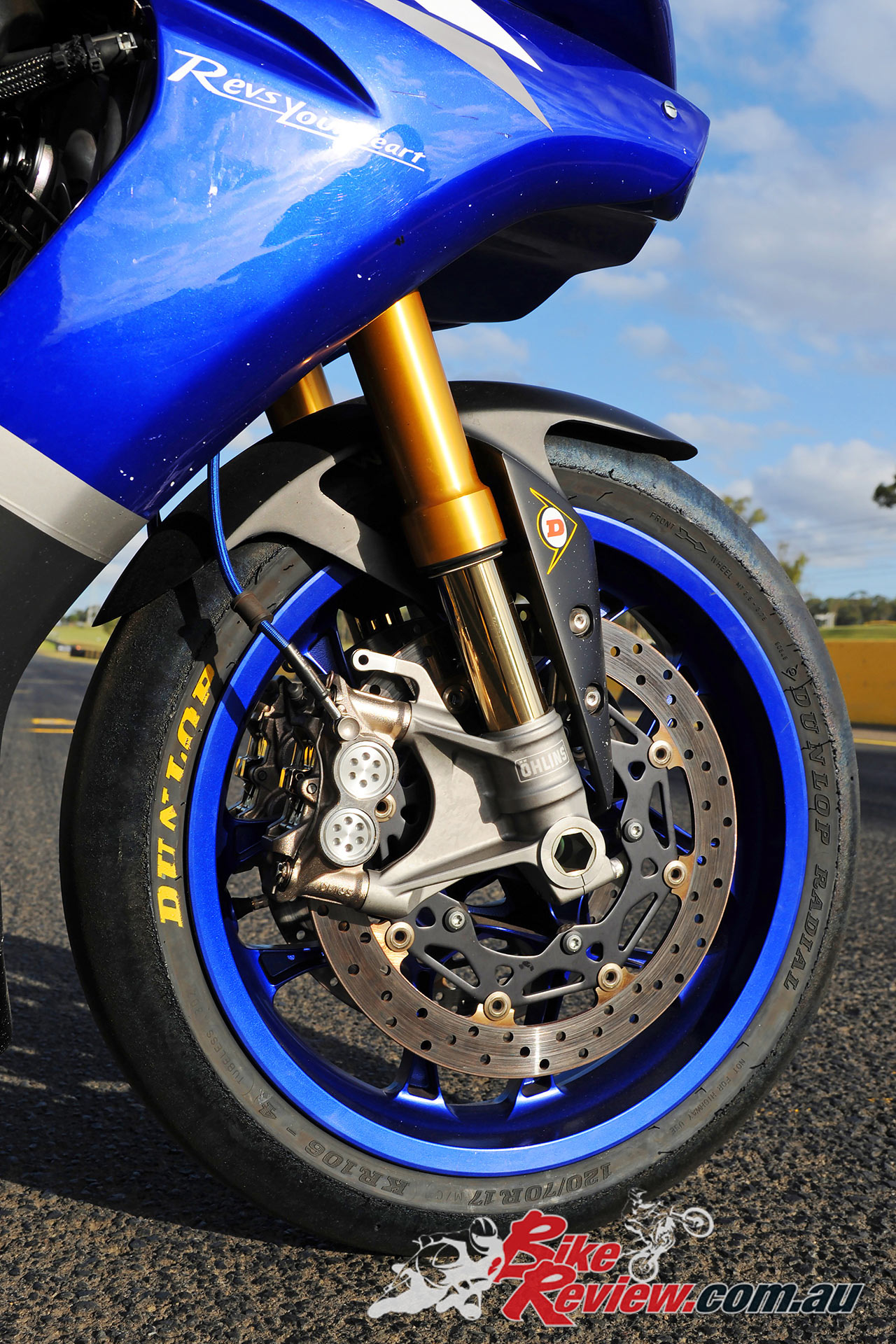 Brakes are standard items with the exception of Goodridge braided lines, and SFR brake fluid, with the addition of a front Brembo RCS19 master-cylinder.

Wheels are also standard items, with the 2015 R1 boasting super-lightweight cast magnesium wheels which save almost 1kg in weight over the previous model’s offerings. 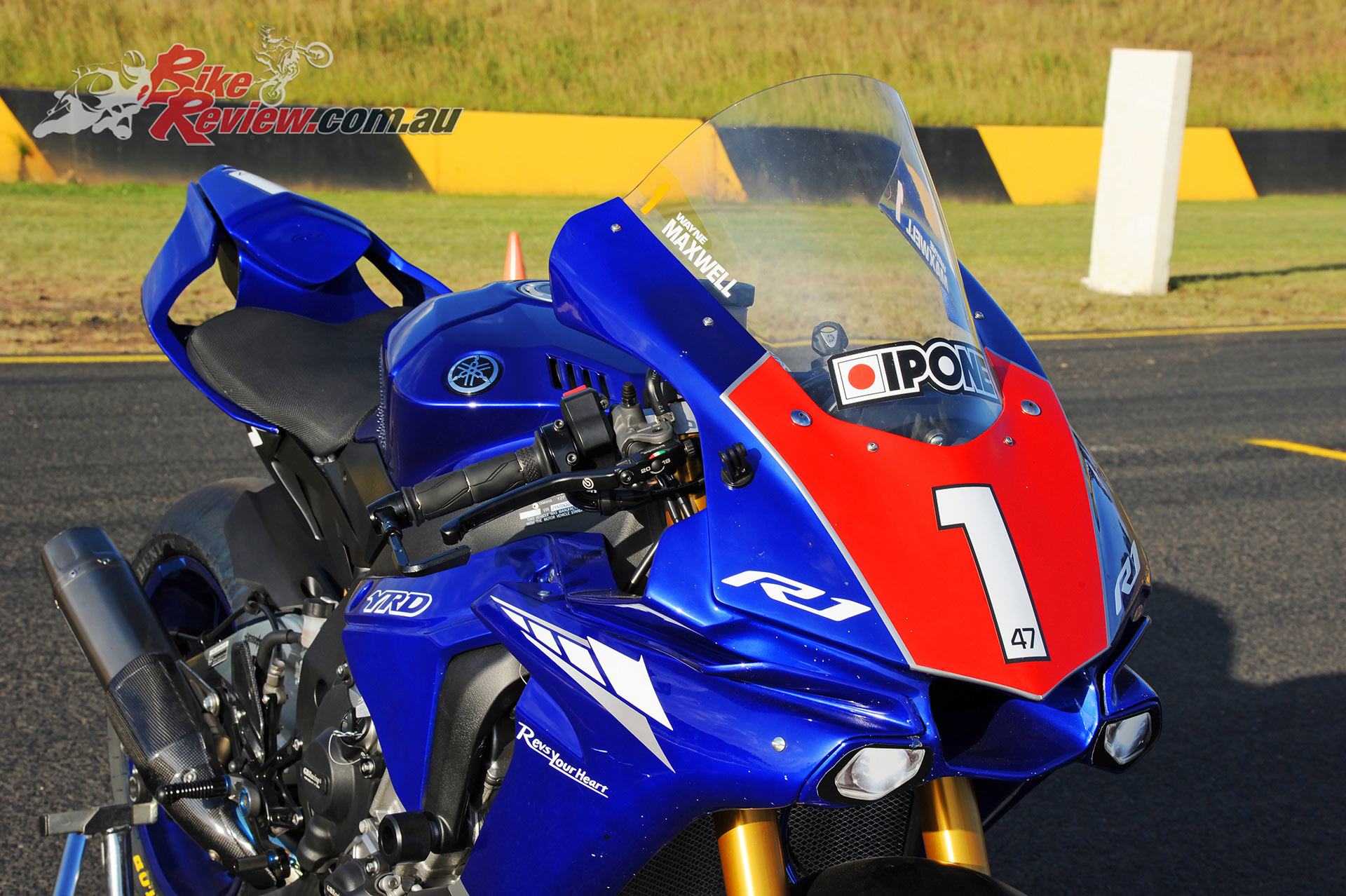 The R1M is also fitted standard with full carbon-fibre fairings, which while light are a costly proposition to replace, and the YRT team have instead run Racer’s Edge fairings and seat, painted by Steven Kruik with decals from Caboolture Signs

Additional gear include GB Racing engine covers, a secondary display in the form of a SpeedAngle lap timer, and front brake-lever protector.

See the breakouts below for more information on the 2015 Yamaha YZF-R1M. 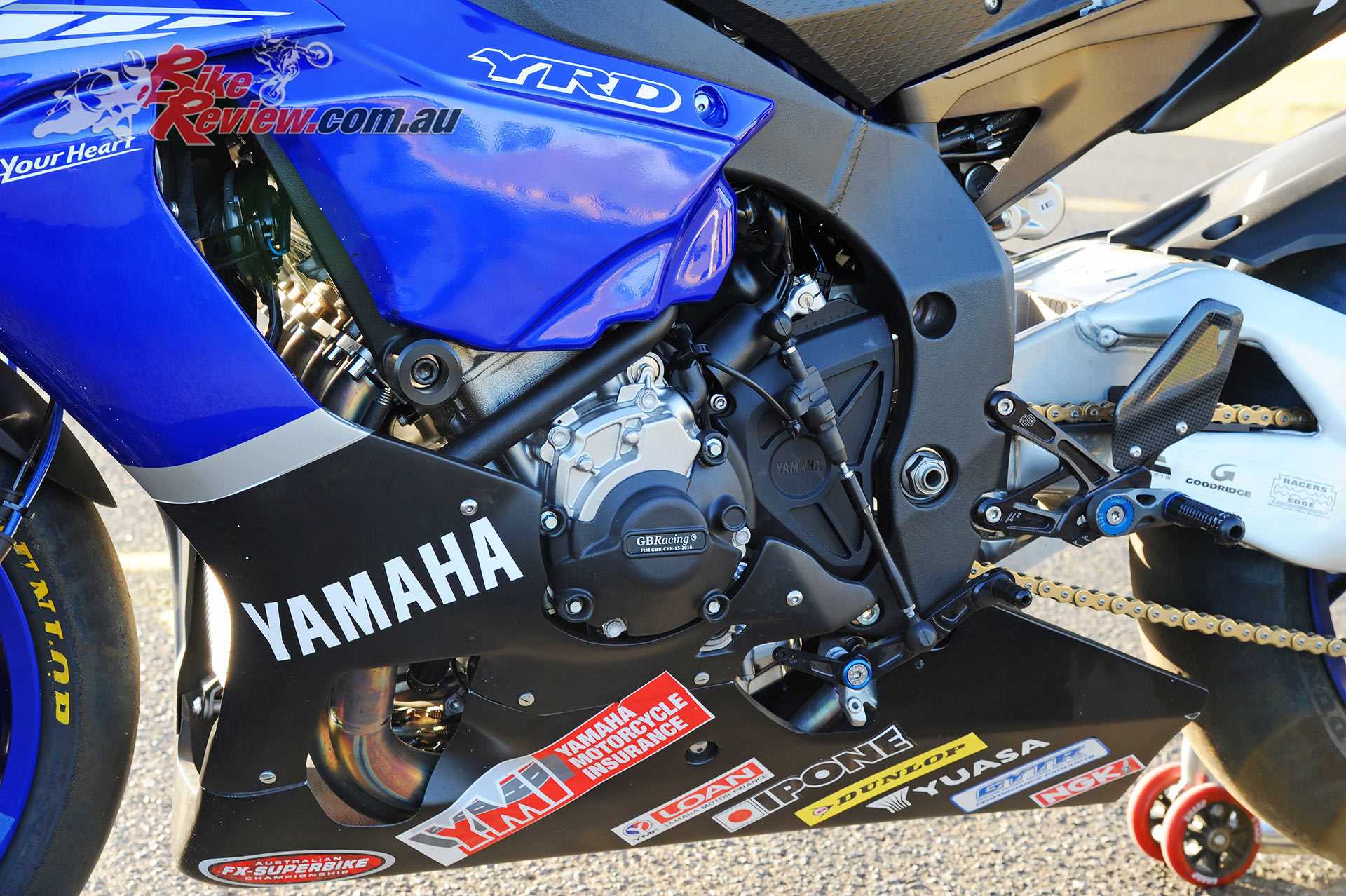 The engine is equipped with a 13.0:1 high compression cylinder-head that features reshaped ports together with large intake and exhaust valves of 33mm(IN) and 26.5mm(EX). Valve angle is narrower to achieve a compact pent roof combustion chamber. The engine features titanium fracture-split connecting rods that are 40 per cent lighter than steel. The fracture-split design also ensures that the big end shape has an extremely high level of circular precision.

New for 2015 forged pistons utilize a box-shaped ‘bridge-box’ construction on their underside that gives high levels of rigidity combined with low weight. For the first time, the R1 adopts a new rocker arm valve drive mechanism with a lever ratio that gives a higher valve lift than the cam height, while also decreasing the load on the cam for reduced frictional losses. 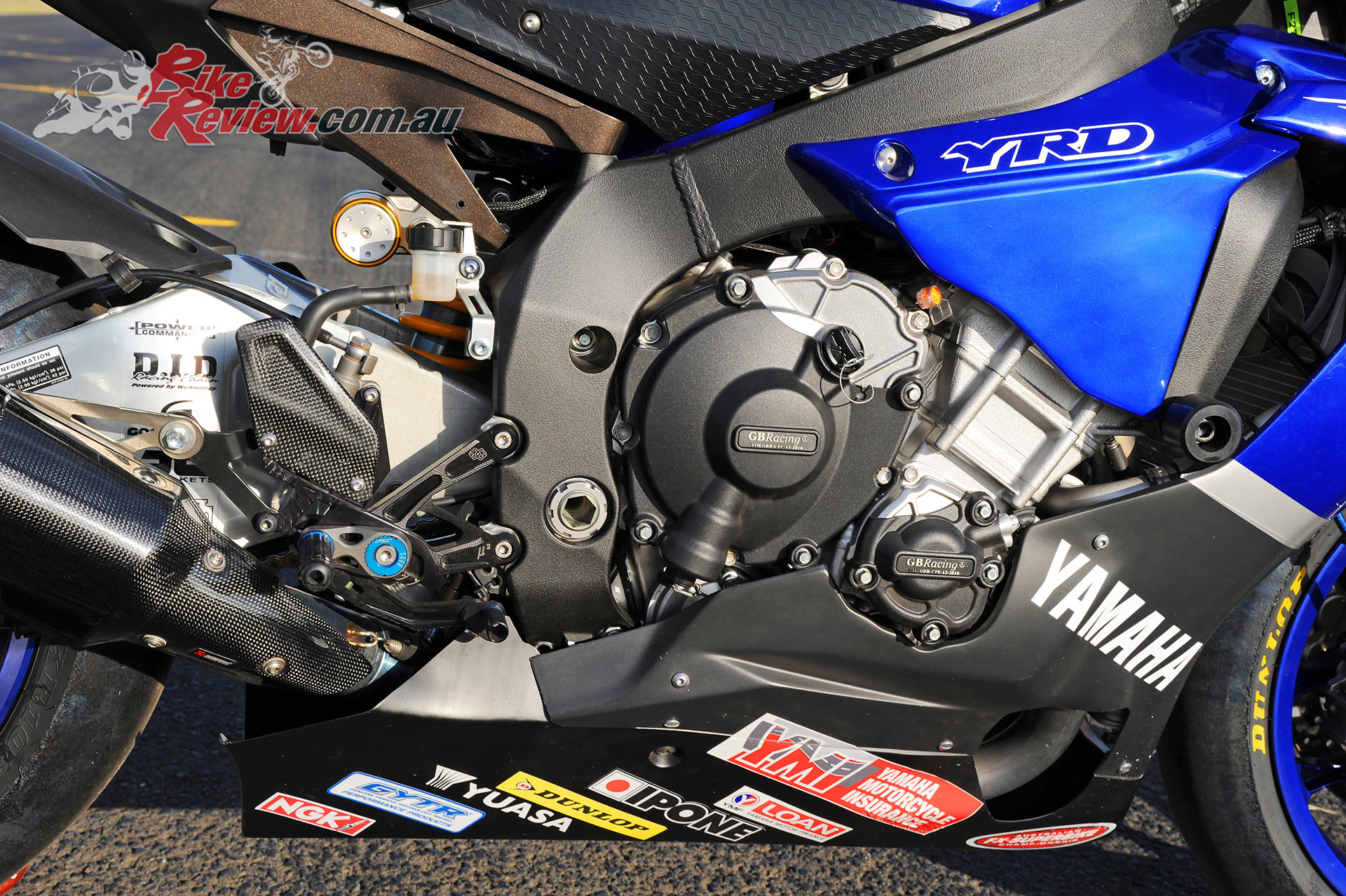 A big 10.5L litre airbox is featured. The 2015 R1 is also equipped with a Yamaha Chip Controlled Throttle (YCC-T) operating a newly developed fuel injection system featuring two-directional 12-hole main injectors that direct their high pressure spray at the back of the intake valves. Secondary injectors operate at higher engine speeds and deliver their fuel spray from the upper part of the intake funnel. A new for 2015 exhaust system is manufactured mainly from titanium.

The new assist and slipper (A&S) clutch has been designed to match the new engine’s high power and torque delivery, and as well as being 19 per cent lighter than the current model’s clutch, its diameter is also reduced by seven per cent.

The new engine uses a centralised method of delivering oil to each individual big end from the end of the crankshaft, resulting in minimal frictional losses. The lightweight magnesium oil pan uses a sunken bottom design that lowers the surface level of the lubricant.

By inhibiting the interference between the crank web and the oil, this design cuts power losses and contributes towards the new R1’s high output. 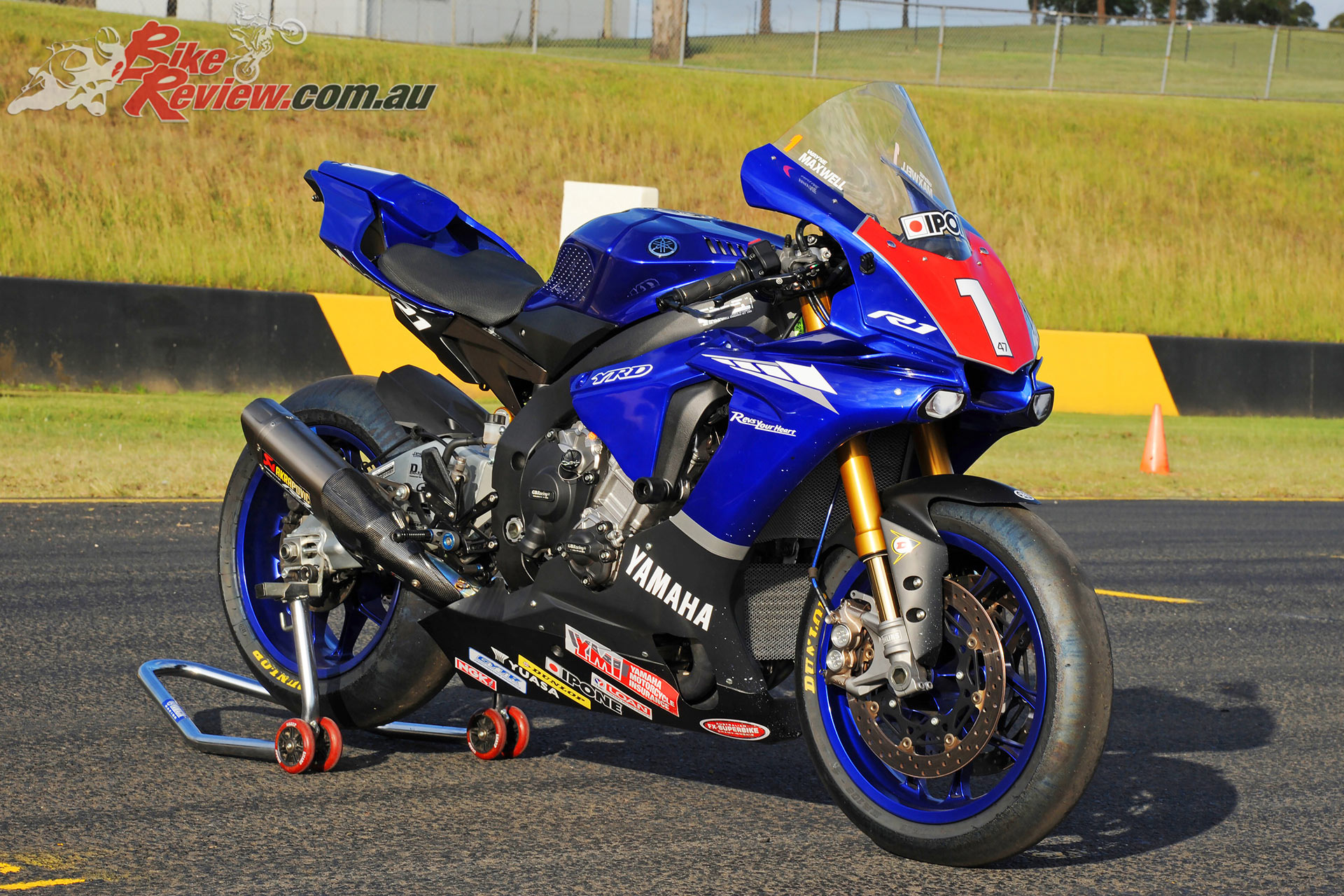 Featuring gravity cast components that are welded together to form a single structural unit, the compact aluminium main frame offers an ideal balance of strength and rigidity. Weighing in at just 199kg with full oil and fuel and only 179kg dry the R1’s racing DNA is evident in the design and construction of every component.

The wheelbase of the 2015 model compared to the 2014 model is 10mm shorter and the 570mm swingarm is 15mm shorter. Both the caster and fork offset are the same and axle diameter is increased by 3mm to 25mm.

The YZF-R1M is as standard equipped with an Ohlins Electronic Racing Suspension (ERS) system, including forks and shock. 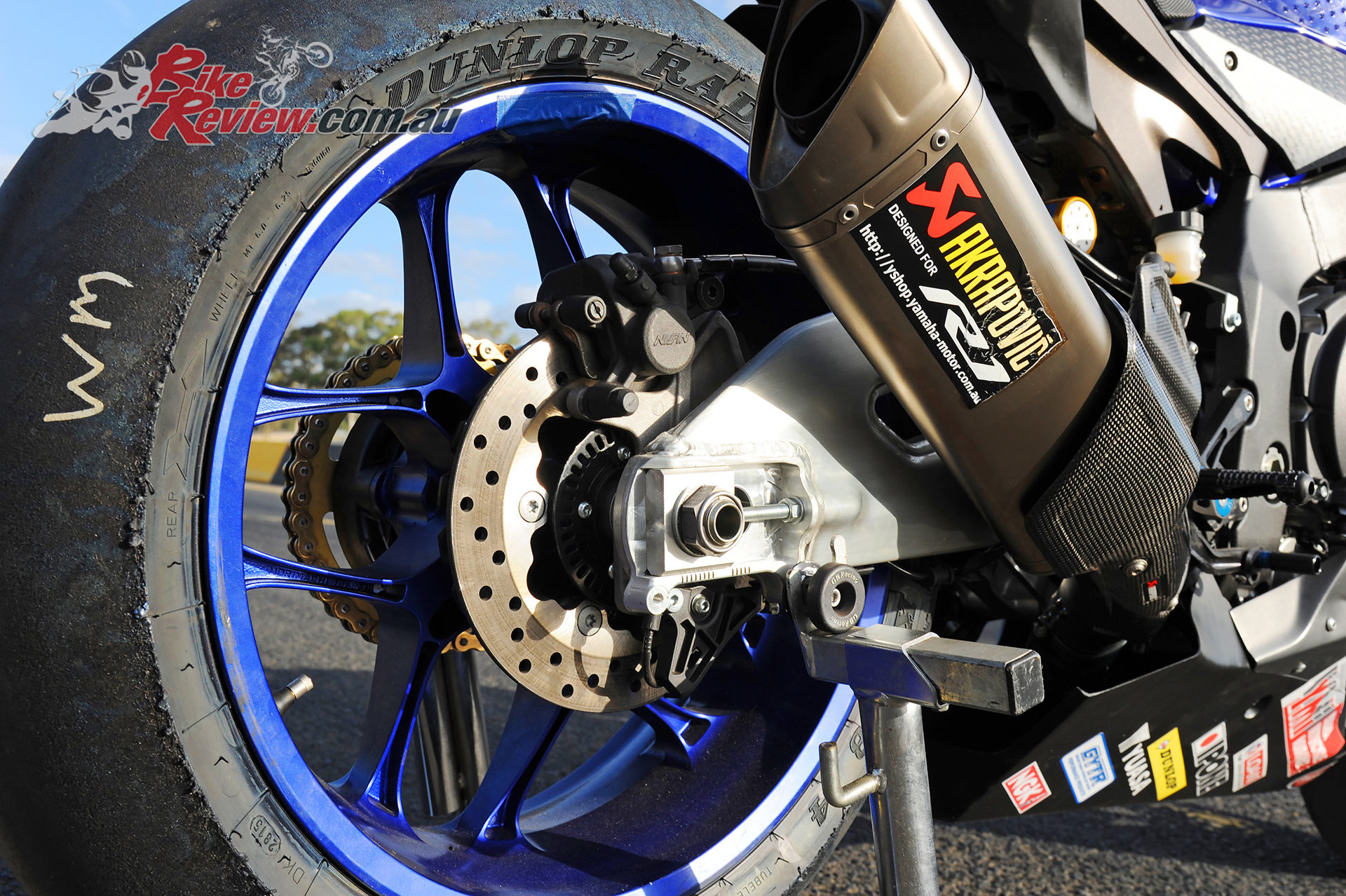 The body design of the new R1 has been shaped by the demands of the racetrack, and for this reason Yamaha used their winning MotoGP M1 as inspiration. The YZF-R1M is equipped with a full carbon fairing, carbon front guard and carbon seat cover. 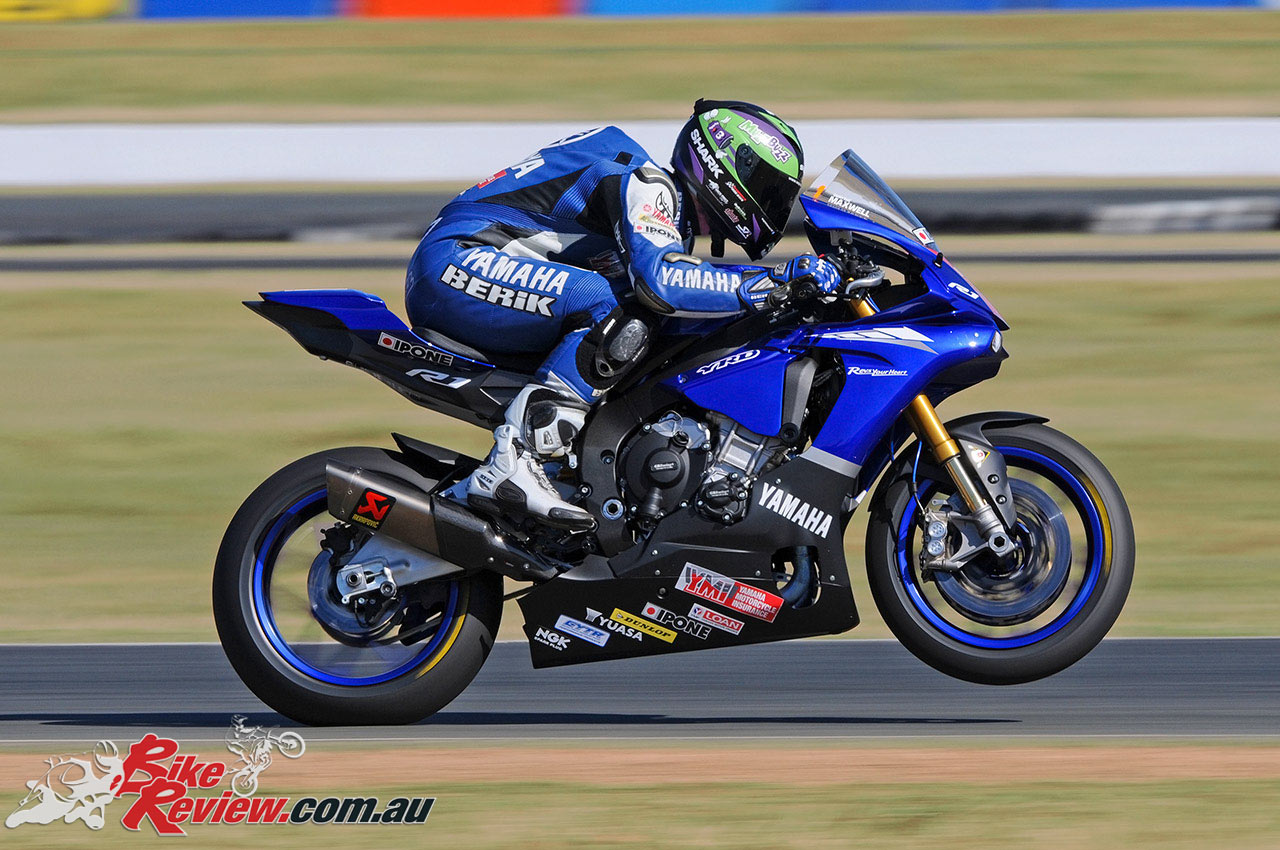 One of the most revolutionary design features on the new R1 is its radical new face with a unique ‘headlight-less’ look. In place of the usual twin headlights, this front cowl is equipped with thin and straight LED position lights, while the compact new LED headlights are located within the leading edge of the side cowling.

The 2015 R1 is equipped with a highly sophisticated 6-axis Inertial Measurement Unit (IMU) that instantaneously delivers comprehensive machine running data to the ECU.

Developed exclusively for the 2015 onwards R1, this 6-axis IMU consists of three gyro sensors that measures machine pitch, roll and yaw, as well as three G-sensors that transmit data on forward/backward, left/right and up/down acceleration. 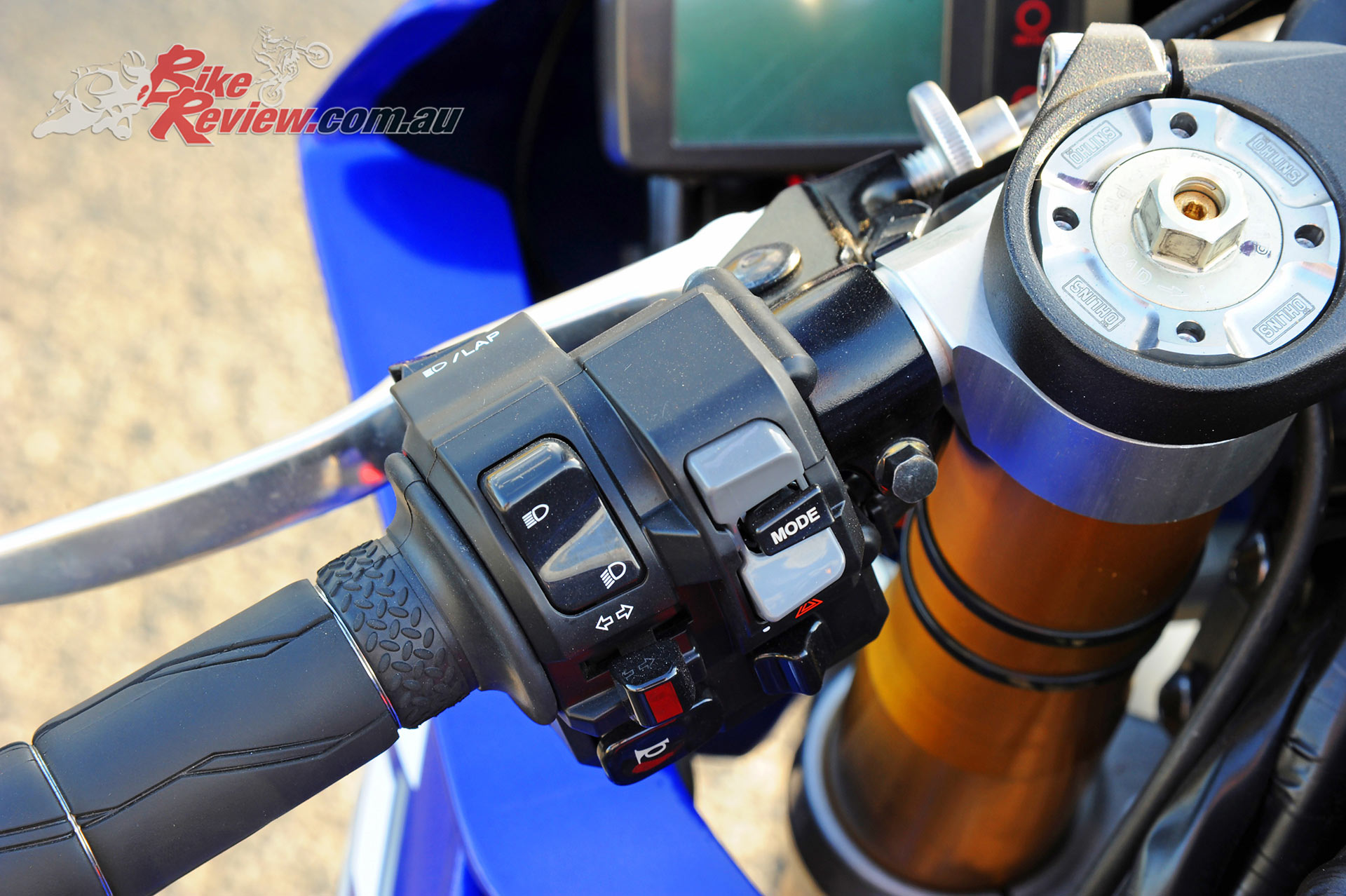 By constantly analysing this data, the IMU is able to establish the R1’s position and behaviour – including lean angle, slide speed and pitching rate. Data is then sent via a CAN system to the ECU that makes real time calculations and instantly adjusts the R1’s various electronic control systems in order to achieve optimum performance with high levels of controllability.

This in turn has enabled Yamaha to equip this new superbike with the most advanced MotoGP technology, such as a banking angle sensitive rear wheel Slide Control System (SCS) and Traction Control System (TCS).

TCS is able to optimise the drive force to the rear tyre by monitoring the difference in speed between the front and rear wheels, and if it detects that rear wheel traction is being lost, the ECU adjusts the throttle valve opening, fuelling and ignition timing accordingly.

The R1’s TCS takes the concept to the next level by using additional data relating to the bike’s banking angle when calculating the optimum rear wheel control settings. For example, when the R1 is cornering at a high banking angle, the IMU’s sensors will activate the TCS to a higher level of control than when the motorcycle is upright allowing the R1 rider to achieve optimum performance on a circuit, or whether powering out of a corner or accelerating in a straight line. 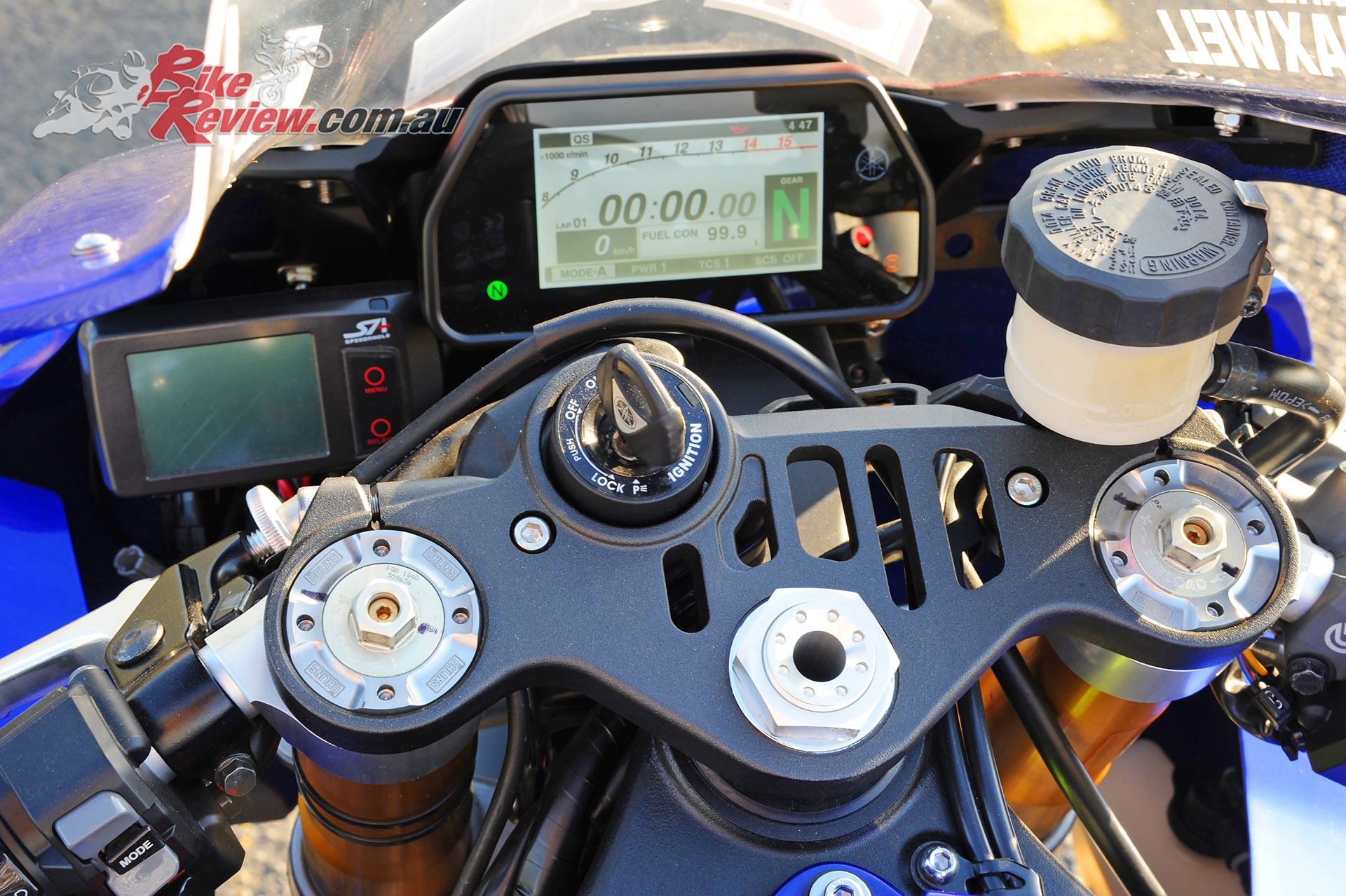 Yamaha’s patented Slide Control System (SCS) is designed to limit sidewards movement of the rear tyre by adjusting the engine’s output to an optimal level via the ECU when a slide is detected.
The third weapon in the R1’s control armory is its LIFt control system (LIF) that has been developed to control front wheel lift when accelerating hard.

For fast, smooth and efficient starts, the Launch Control System (LCS) restricts engine rpm to below 10,000rpm even at full throttle. This control system also uses information from the TCS and LIF systems in order to maintain an optimum level of engine output when accelerating away from the start line, allowing the rider to concentrate fully on the crucial first few seconds of any race. The Quick Shift System (QSS) gives seamless upshifts. 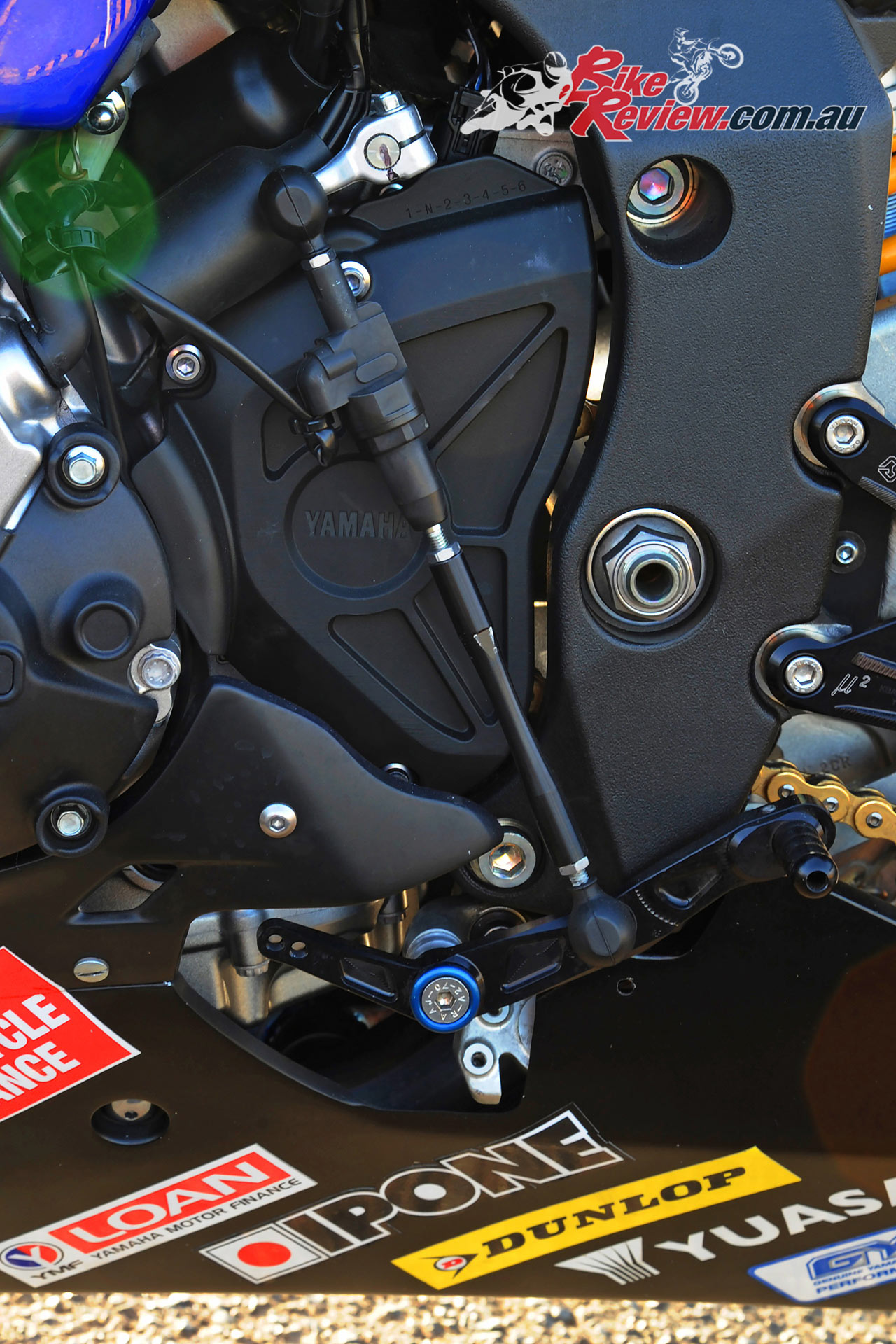 Wayne Maxwell’s YRT Yamaha YZF-R1 – 2015 ASC & 2015 ASBK – The R1M comes with standard quickshifter, which is used with the Gillies rearsets

The YRC offers four grouped presets for quick and simple ‘one-click’ selection of all electronic controls through easy handlebar switches. In the (YRC) each of thecontrol modes can be freely adjusted into new combinations based on user preferences and riding environment.

With its wide array of electronic controls, the new R1 produces a mass of information and Yamaha have developed an effective new rider-machine interface that conveys the data in a clear and intuitive manner.

The dash can be set to either ‘Street’ or ‘Track’ mode with a choice of a black or white background. In ‘Street’ mode the display features items such as gear position, while the tachometer bar display uses different colours as the revs increase, allowing the rider to instantly comprehend the data. Other items available in ‘Street’ mode include odometer, tripmeters, real-time fuel efficiency, average fuel efficiency and amount of fuel consumed.

In ‘Track’ mode the display shows specific information with a high degree of clarity, such as lap number, lap times and a stopwatch function. The bar type tachometer display starts at 8000rpm and runs to the red line, and the gearposition indicator is prominently displayed to the right of the panel. 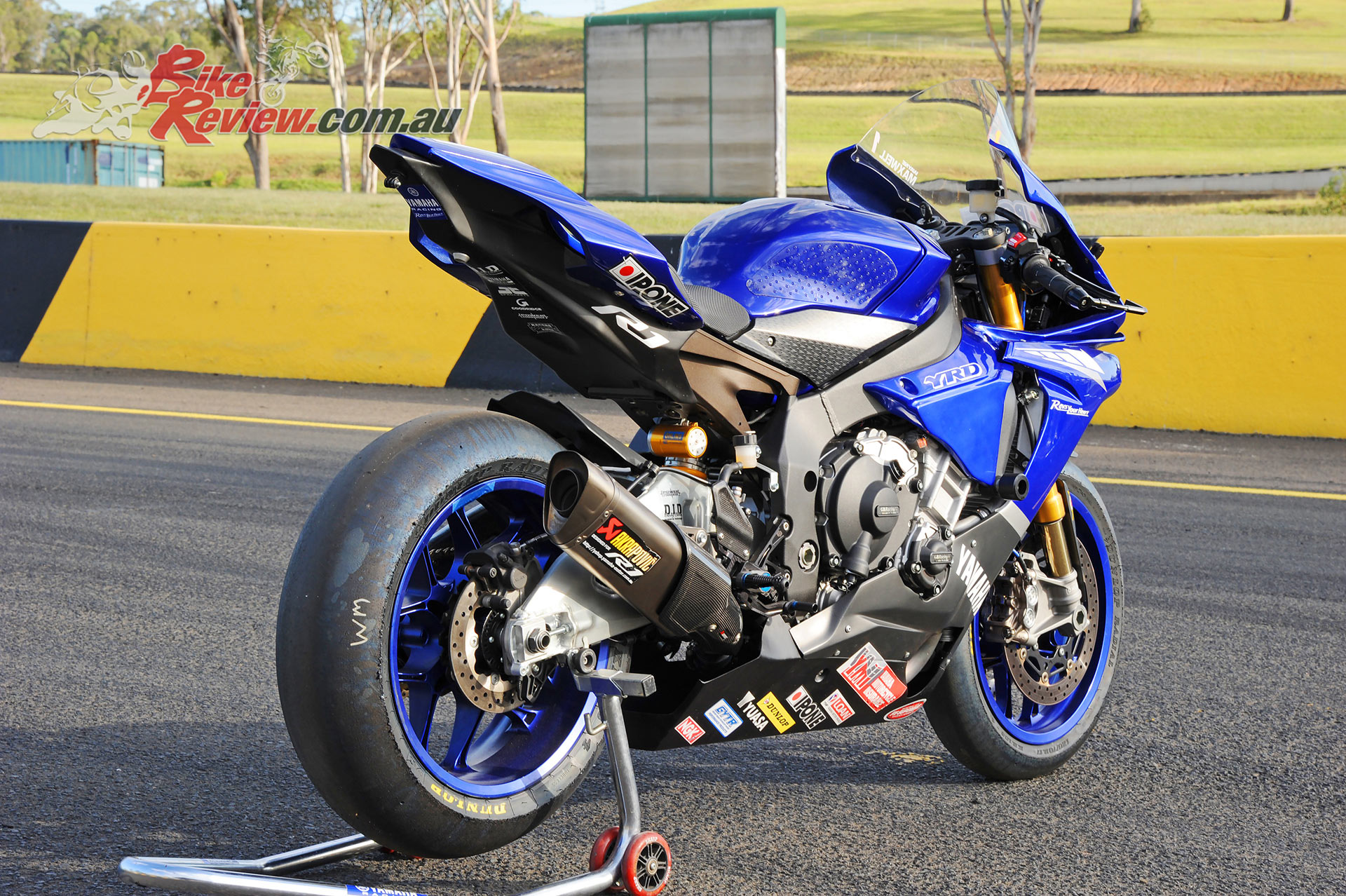 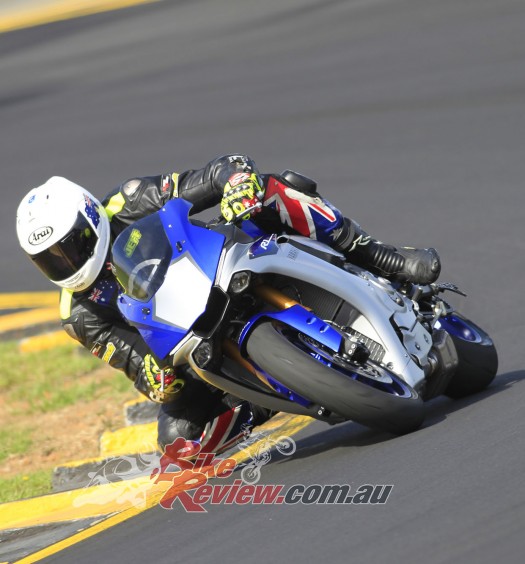 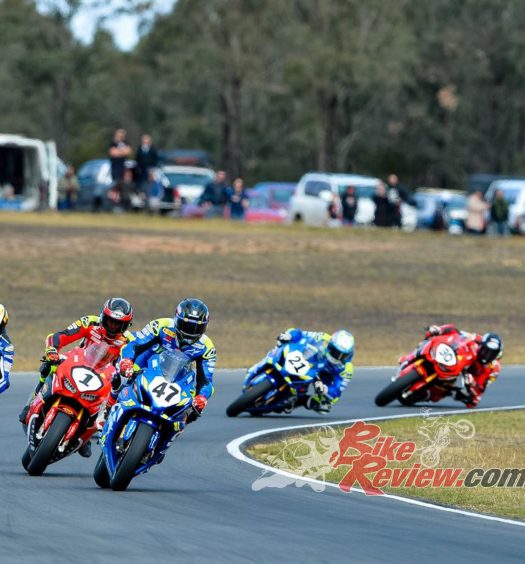