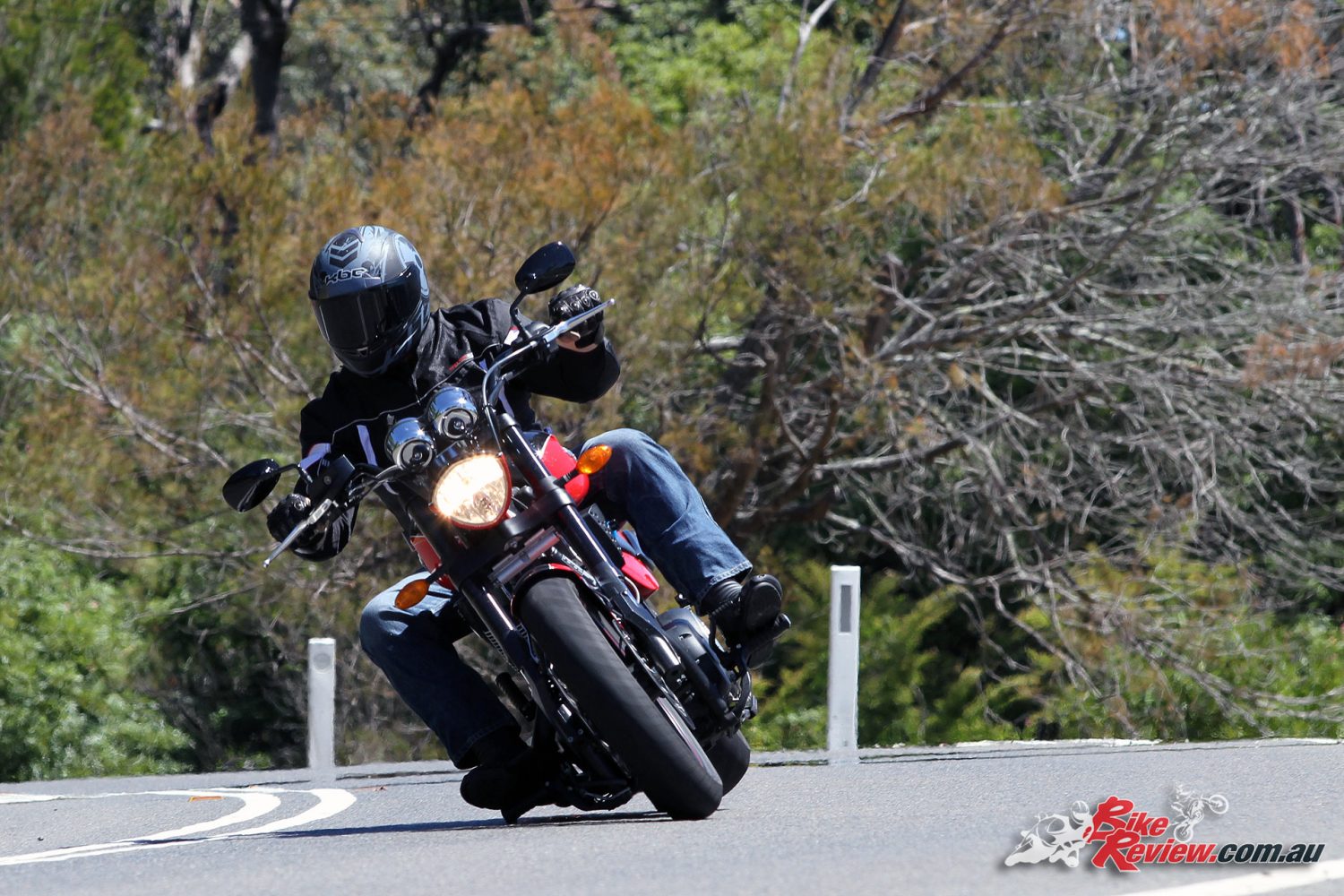 Victory Hammer S, offering good clearance for the class but can still touch down while riding aggressively
Bike ReviewsCruiserVictory 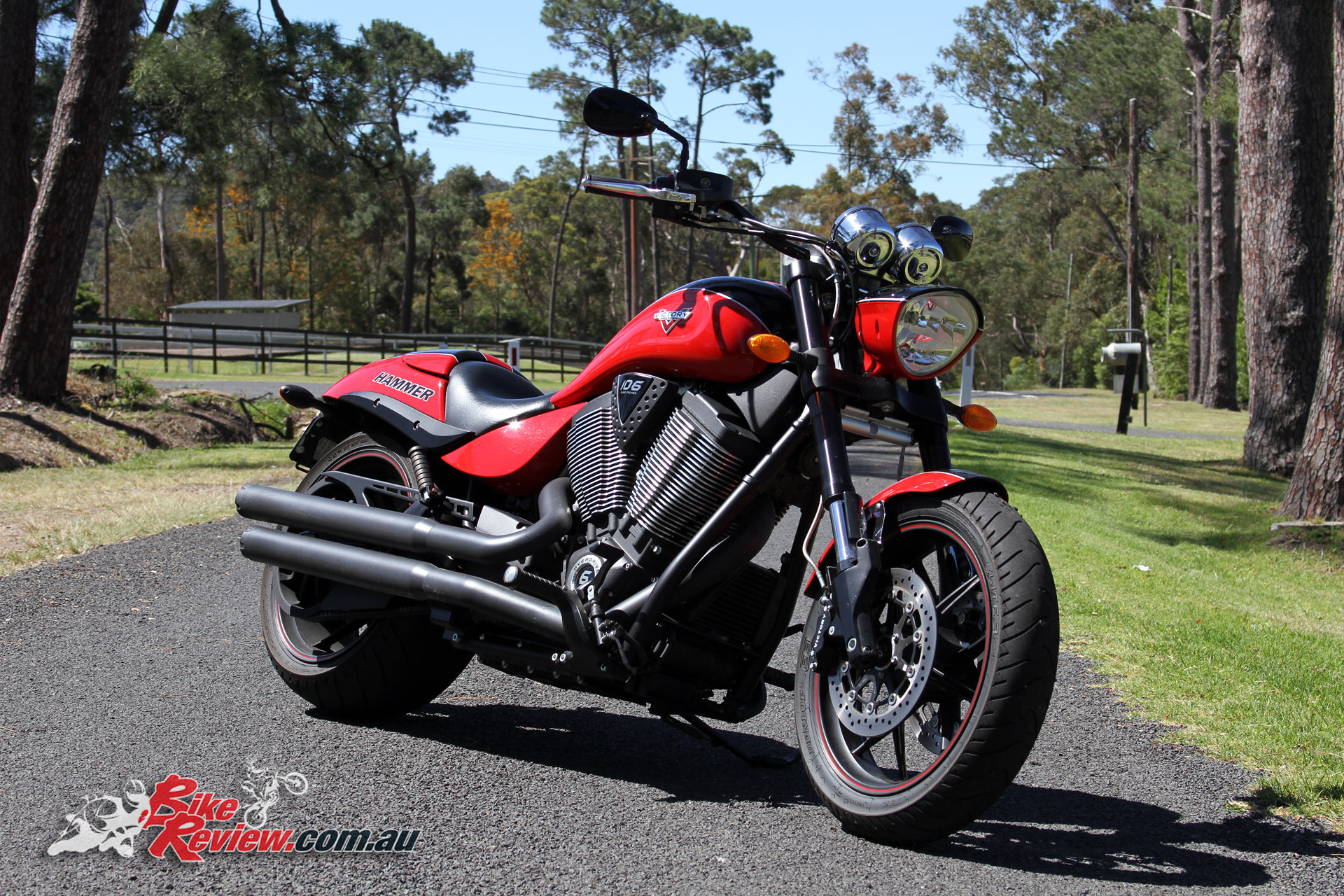 They aren’t as old as the other American motorcycle company, and they haven’t been in business continually for over 110-odd years but, they have learned quickly and they have taken on a big and important chunk of the motorcycle market.

The cruiser market is the most heavily looked at by potential customers that have either out grown or had enough of the sport bike scene. I’m sure there are many owners though that share their garage with both a cruiser and sportsbike.

Some cruisers are just that, something to ride and enjoy and to cruise the roads with, these owners want only the simplest of components from the manufacturer, 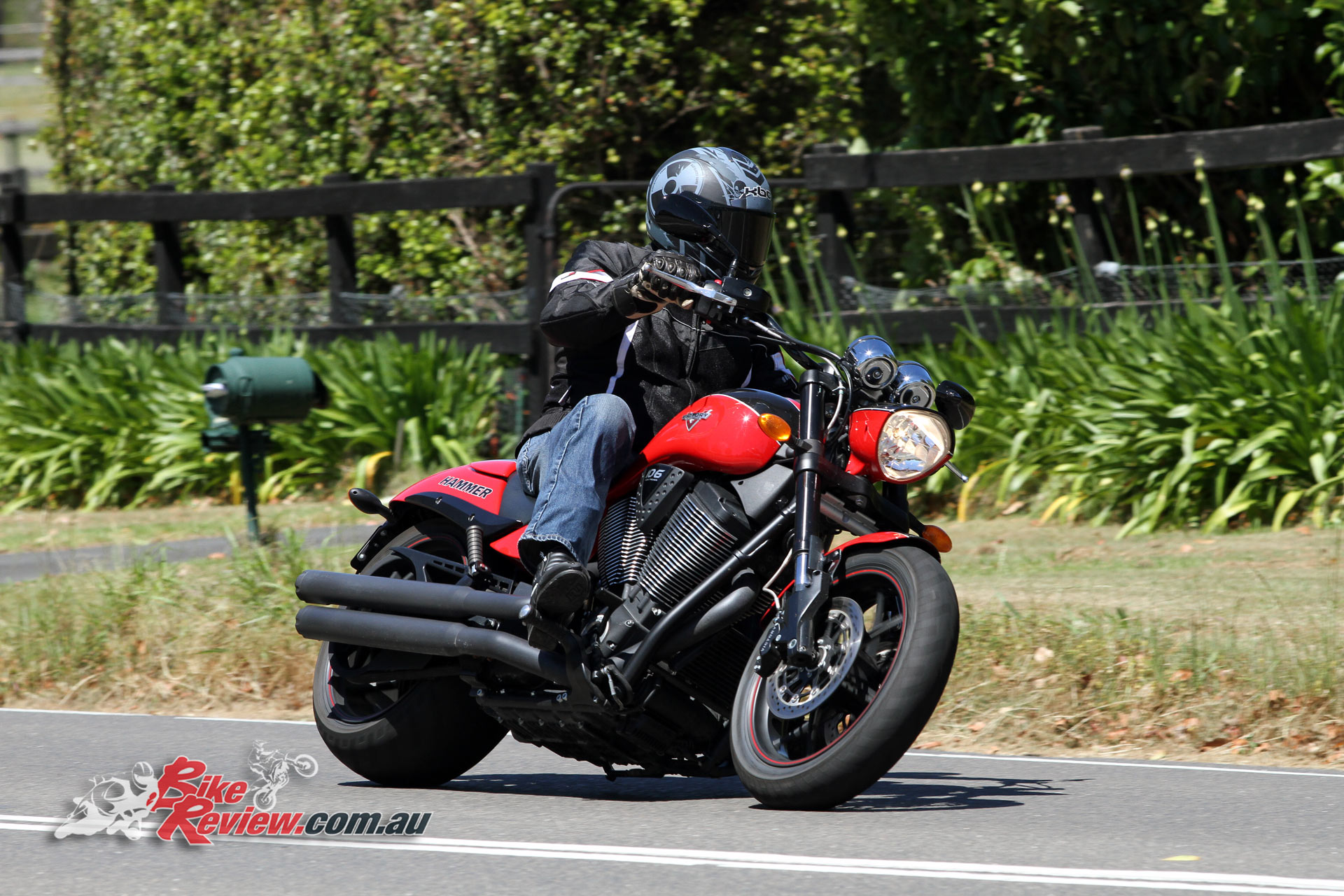 The bike is simple and functional and offers a standard that is typical of the cruiser style. But, there are also those owners of cruisers that want more, they want flasher paint, a big capacity motor, big fat tyres and also the suspension and brakes to be able to push the boundaries of the cruiser style.

These are more performance cruisers and until recent times the owner had to start with the base package and then add the performance parts and modify the suspension, wheels and brakes. 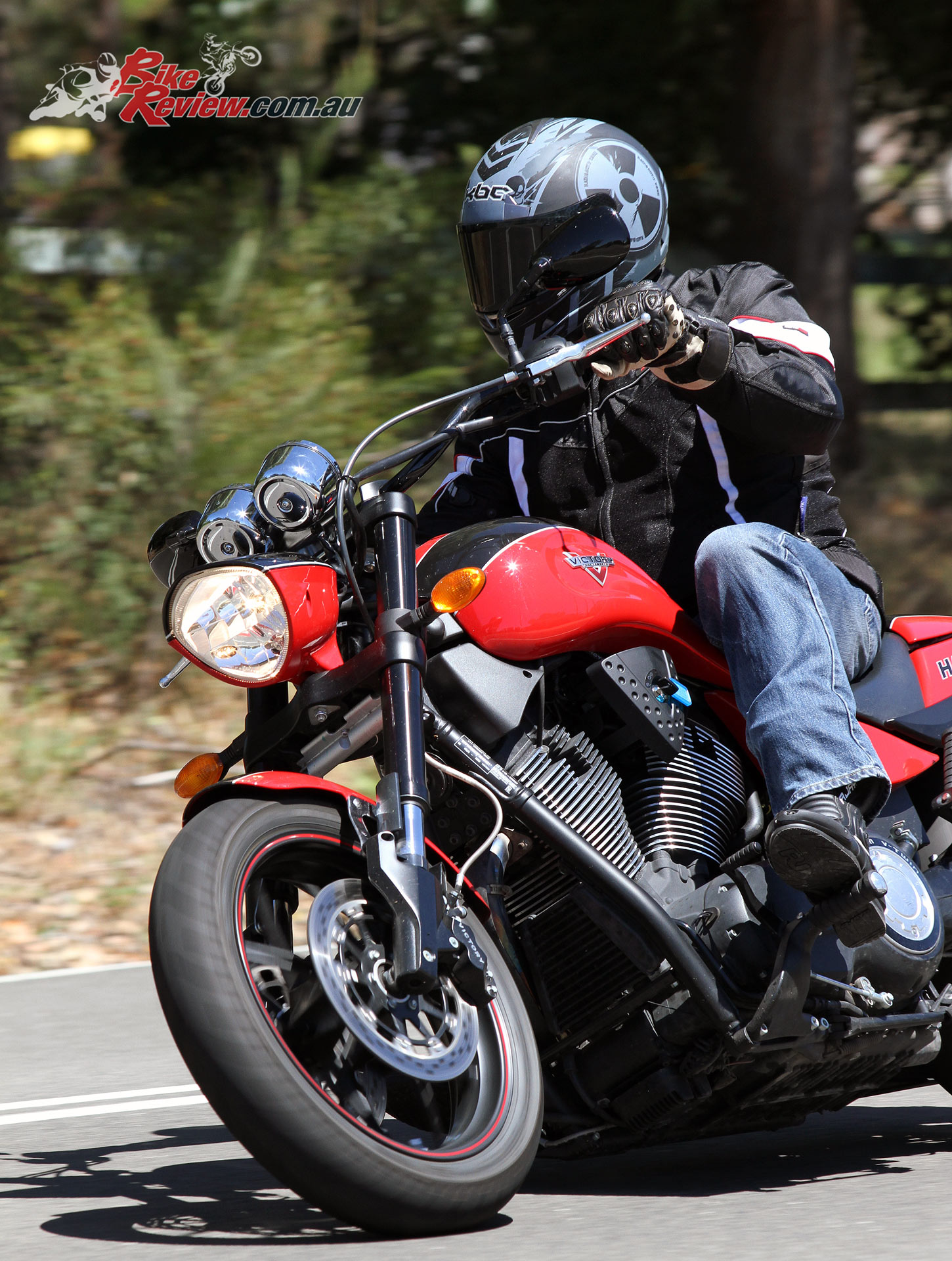 Sure they have a different attitude or need than the other American company but, they have produced some very nice styles of bikes using a common platform. Variety is the spice of life and there is plenty of variety in the Victory camp. 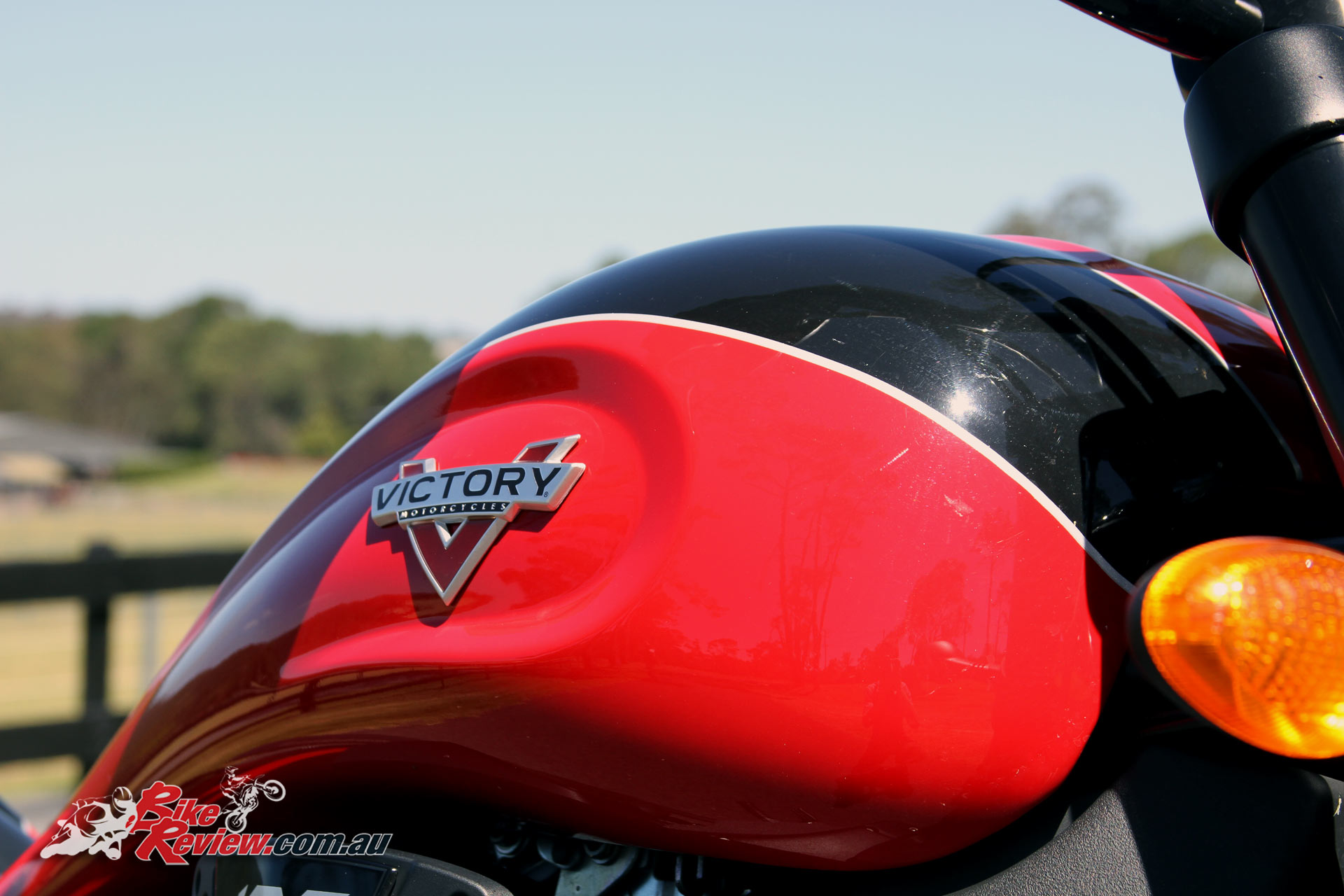 The Victory Hammer S is a good example of the performance cruiser. I recently had a test bike for a week and was very keen to get some decent K’s done on the Hammer. To really try and get the best impression on any motorcycle you do need to ride it over a variety of roads and conditions.

I was able to take the time with this bike, so the first excursion was down the south coast of NSW from Sydney to the coastal towns near the Shoalhaven river. To get south of Sydney there are a number of very different major roads that all diverge on Nowra. 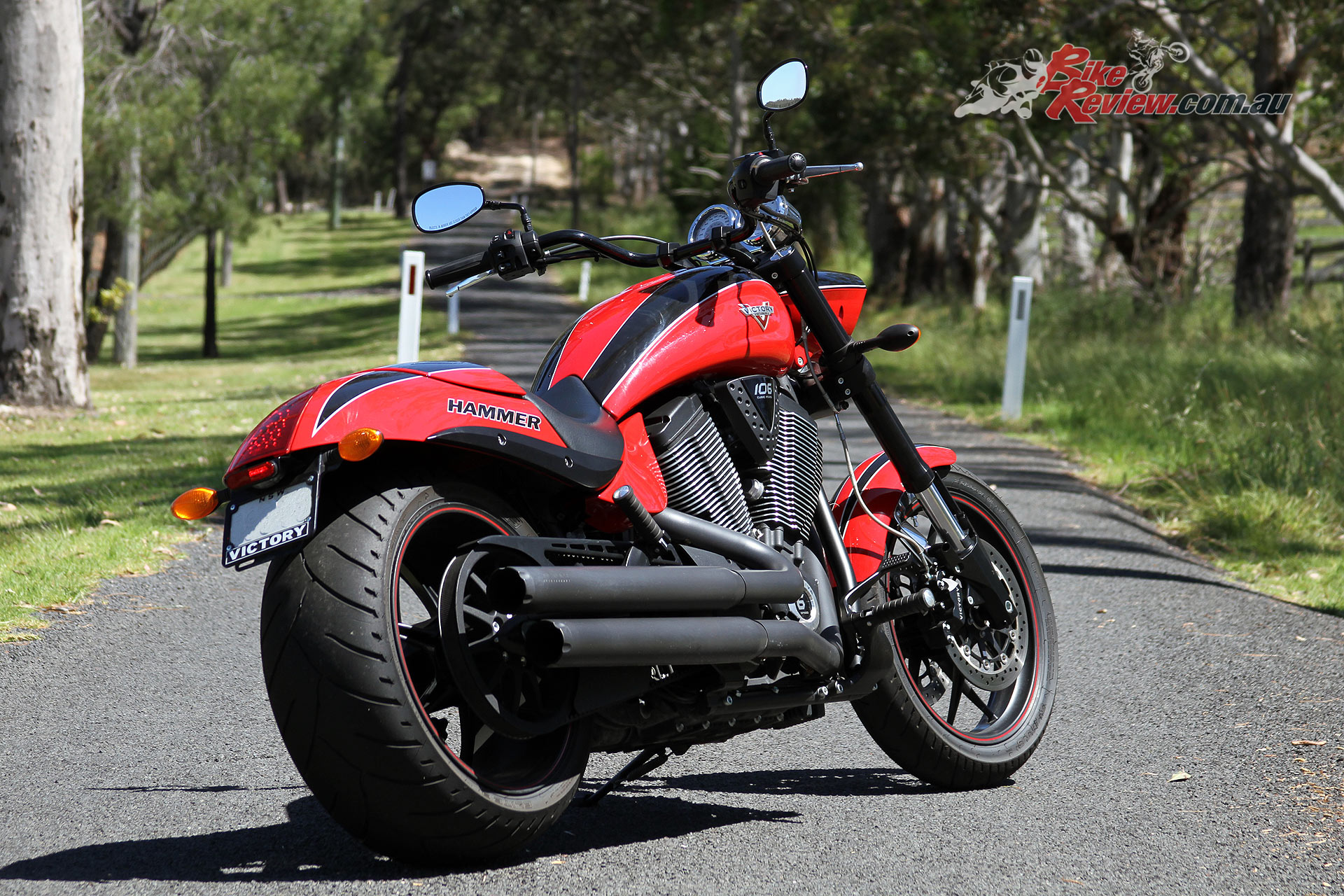 For the first run I went south out of Sydney to Appin, this was mainly a freeway run on the bike doing the obligatory 110km/h but, once I got onto Appin road it was a slower speed and on some nice road with open sweepers and undulation that made it a nice easy pace.

From Appin road it was onto the Princess Hwy, down Mount Ousley and following the Highway south.

Two and a half hours later I was at Culburra, right on the southern mouth of the Shoalhaven river. A bite to eat and a coffee and it was time to head back home.

This time I took the route back from Nowra, up through Kangaroo Valley, not the best roads in the land but ones frequented by motorcyclists every day of the week. 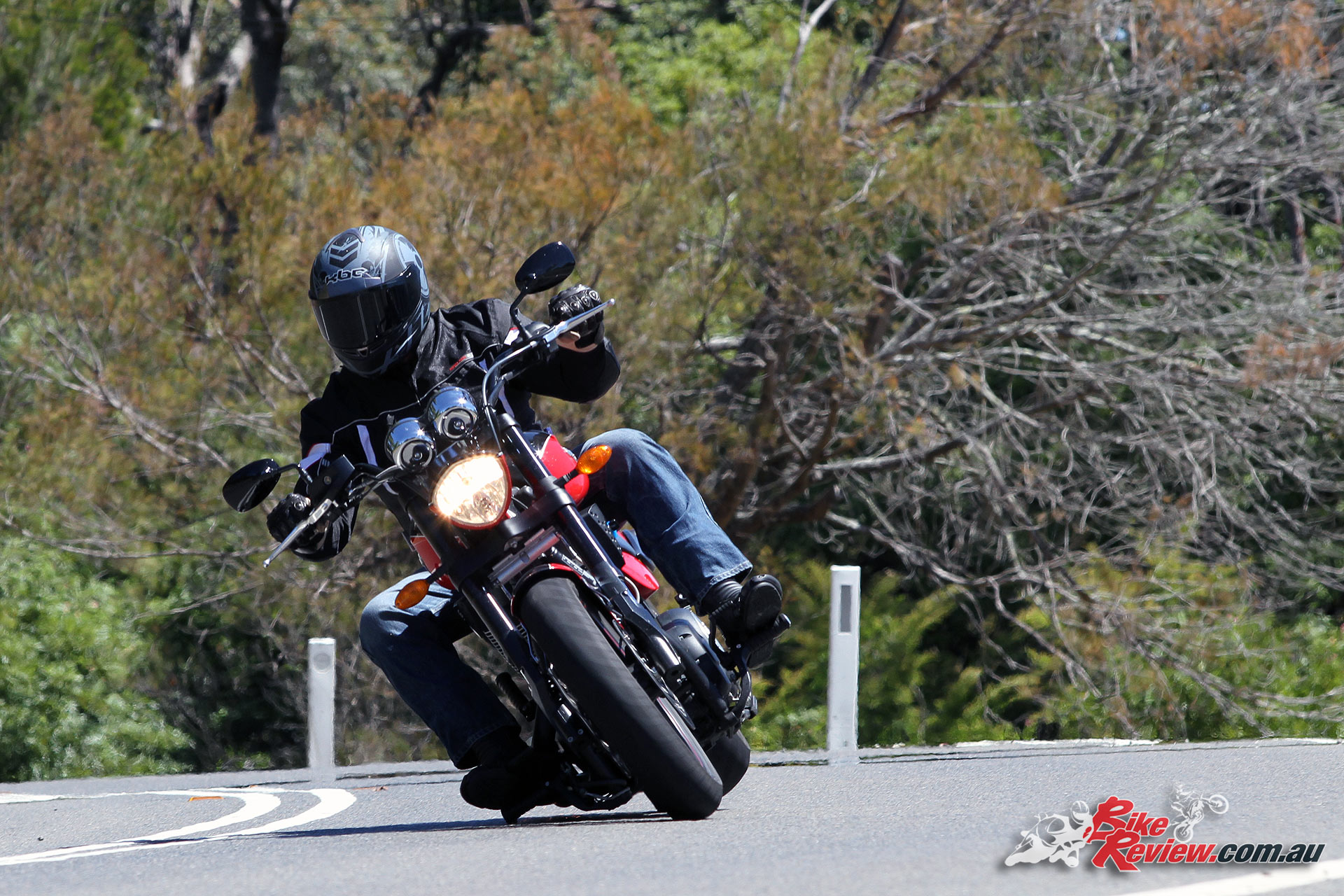 Victory Hammer S, offering good clearance for the class but can still touch down while riding aggressively

The Valley has great tight and twisty sections and elevation changes that pop your ears. It can be great bike riding. After the Valley you come through some smaller communities and eventually end up at Bowral and then on to Mittagong, from there I took the old Hume Hwy staying off the F5 and roamed back through Bargo, Picton and Camden.

Now, if you know these roads, you will understand the variety and contrast of surfaces and conditions I had taken, all in the name of test riding, life can be tough, Ha! Now, tough, that’s a word that can mean a lot.

There were certain aspects of this ride that were tough, but, there were also times that were totally enjoyable on the Hammer. 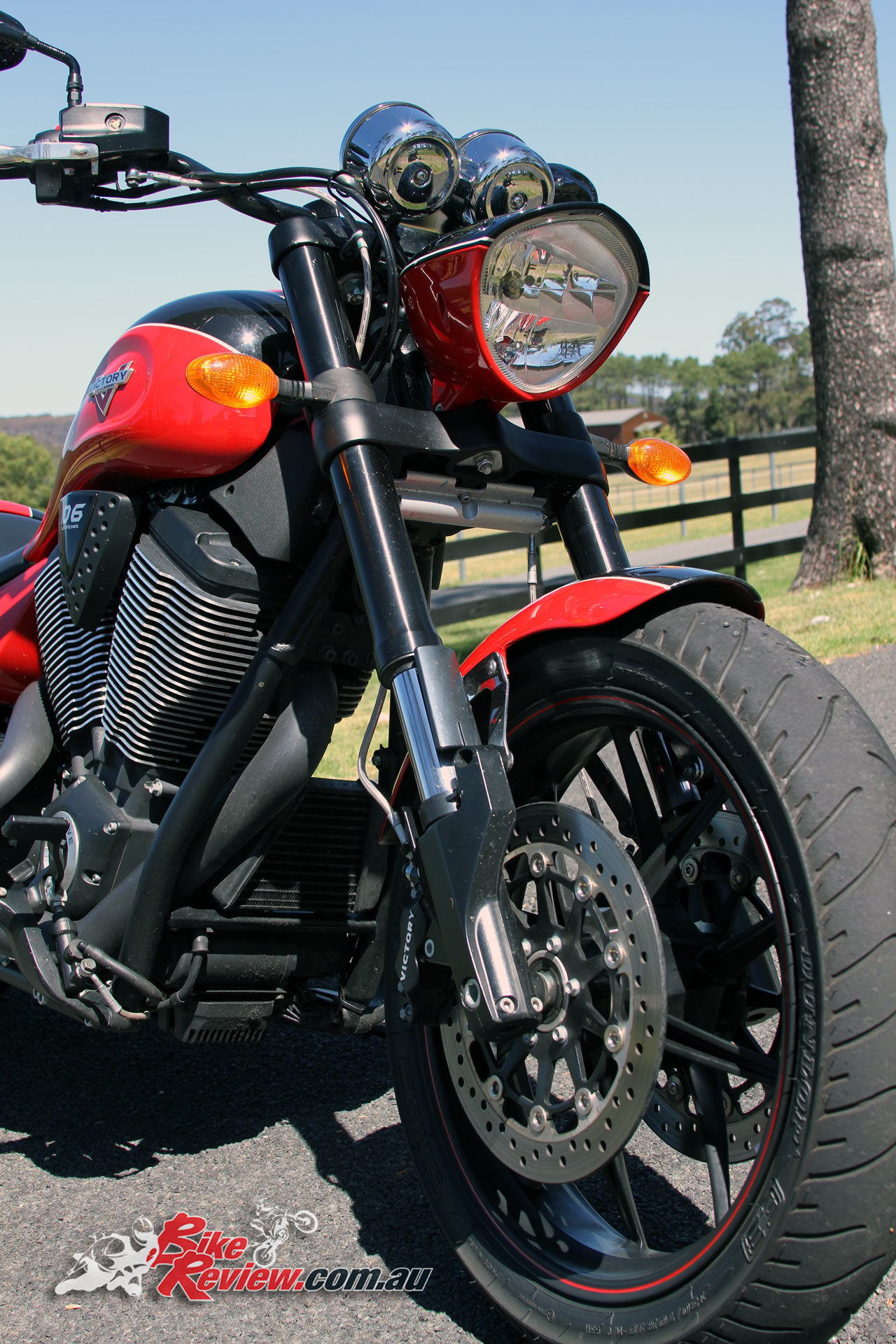 The Hammer is a sport cruiser, it has the upside down forks, the twin disc brakes that stop really well, the big grunty engine and an aftermarket exhaust that was glorious in its note, it also had the 250mm rear tyre and a 130mm front. So there are some serious sport cruiser specs with the Hammer.

The rear suspension on good roads was not a problem, but get onto roads with patch work road repairs, sharp ruts and undulations that stress the rear suspension and it just can’t cope. I’m not going to redesign the rear shock for Victory but, it seriously needs help. 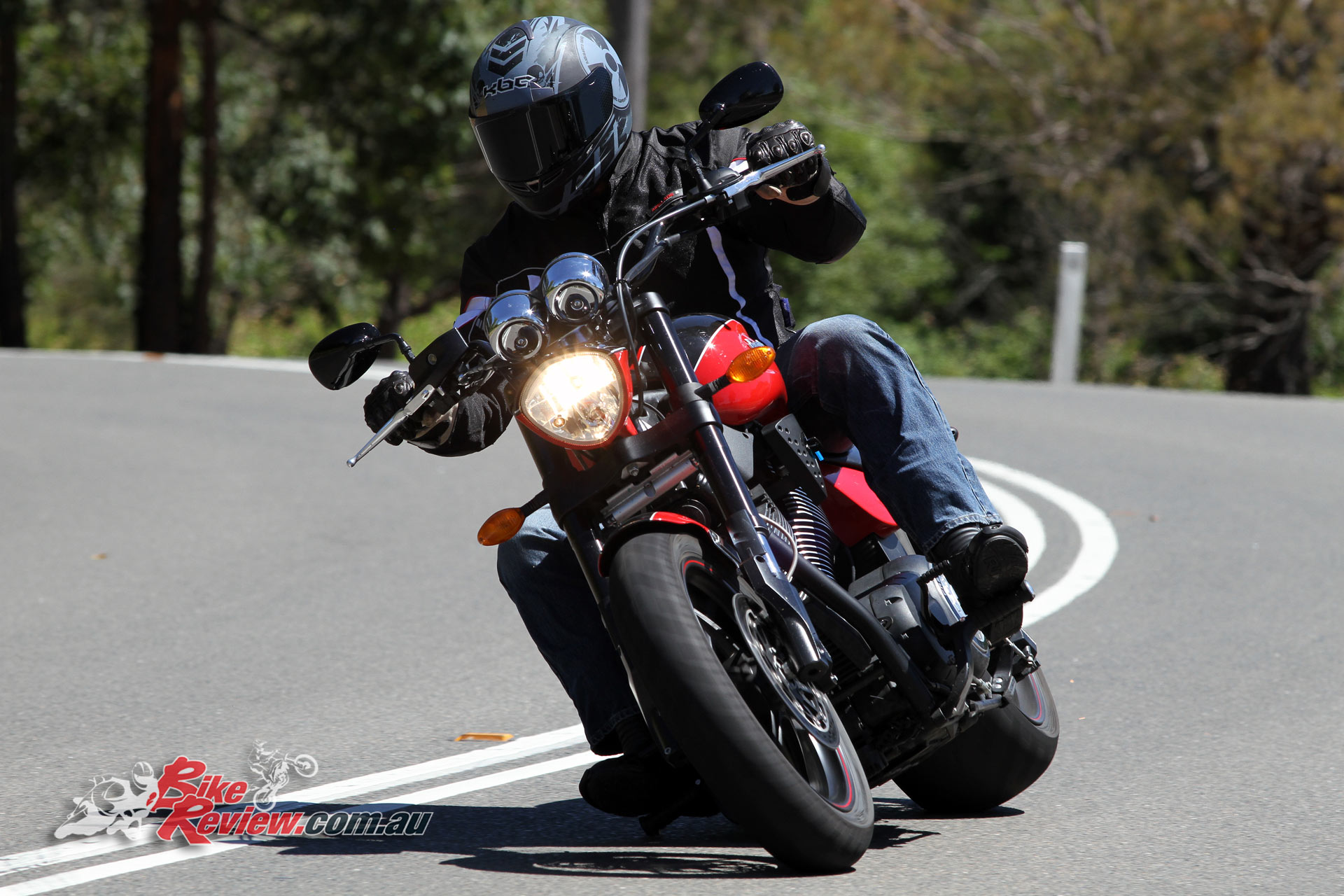 It jarred and shook my body on every bad bump to the point that I was deliberately changing my lines to avoid as much as I could of the bad roads, hard work on a cruiser when you sit very straight and the spine cops a lot of the shock forces.

The front forks were good and although there is no adjustment they offered good feel and soaked up the bumps well. The Hammer also seems to sit higher than other Victorys, not sure if this is real or perceived but it felt better than some of the others I have tested in the past. 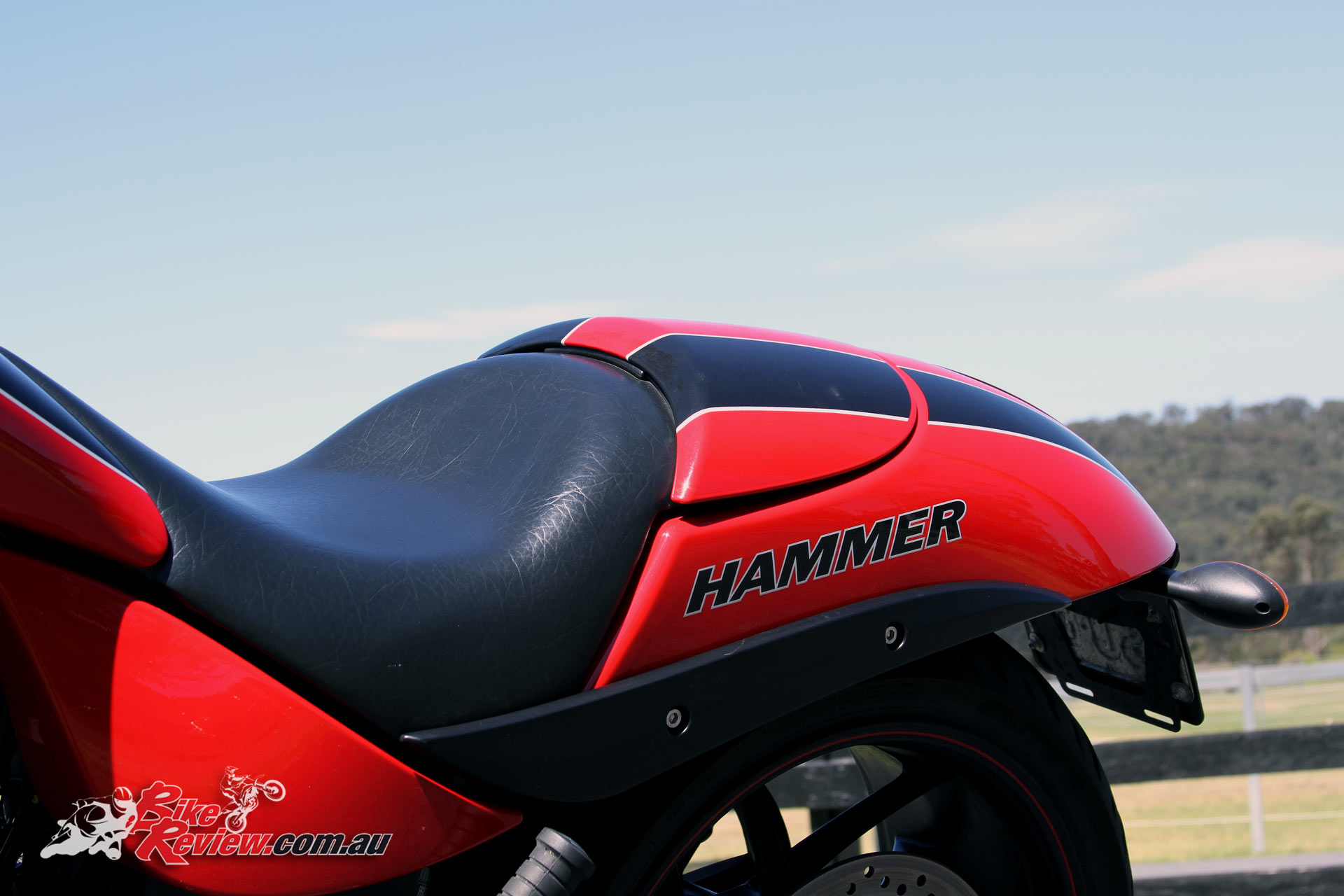 The seat is also very average, it’s small and gets very hard after a short time in the saddle, I was fidgeting around by Appin on the way down and was not very happy at all coming up through the Valley on the poorer roads.

I pity the pillion on this bike, they would have to either be your very best mate, that has absolutely no other choice of transport or your wife or girlfriend who must be absolutely and totally in love with you. 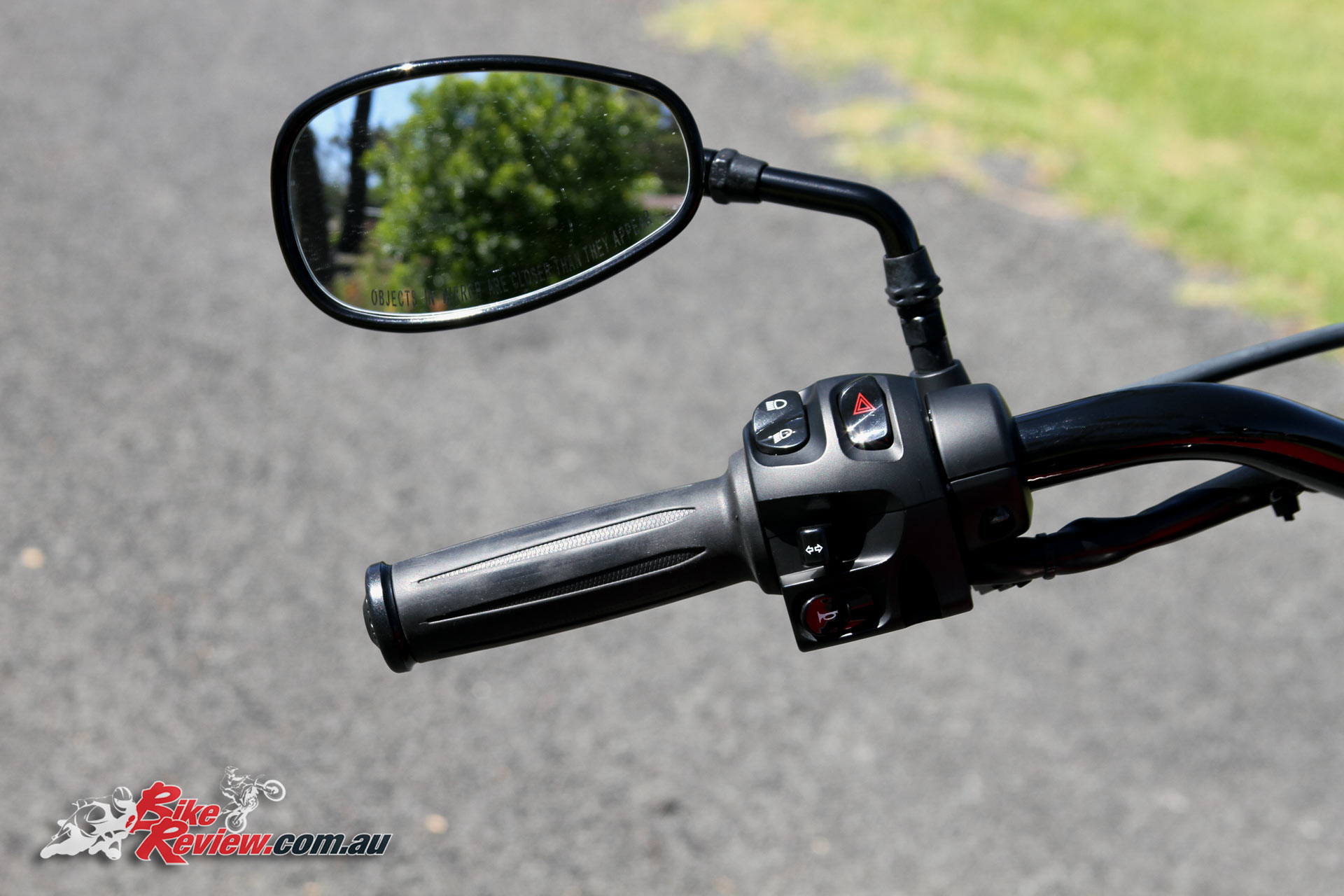 The ergonomics of the bike are typical of the cruiser theme, low seat, wide ‘bars with a certain amount of height and forward controls for the feet. On short runs this is fine, at slower speeds this is also fine, sit back and enjoy the scenery while you enjoy you cruiser.

Up the pace a bit or extend your riding distance and you can start having some issues with the riding position. As the speed increases, so does the wind resistance, you start becoming a human parachute and at 110km/h you are seriously getting pushed around by the air pressure. 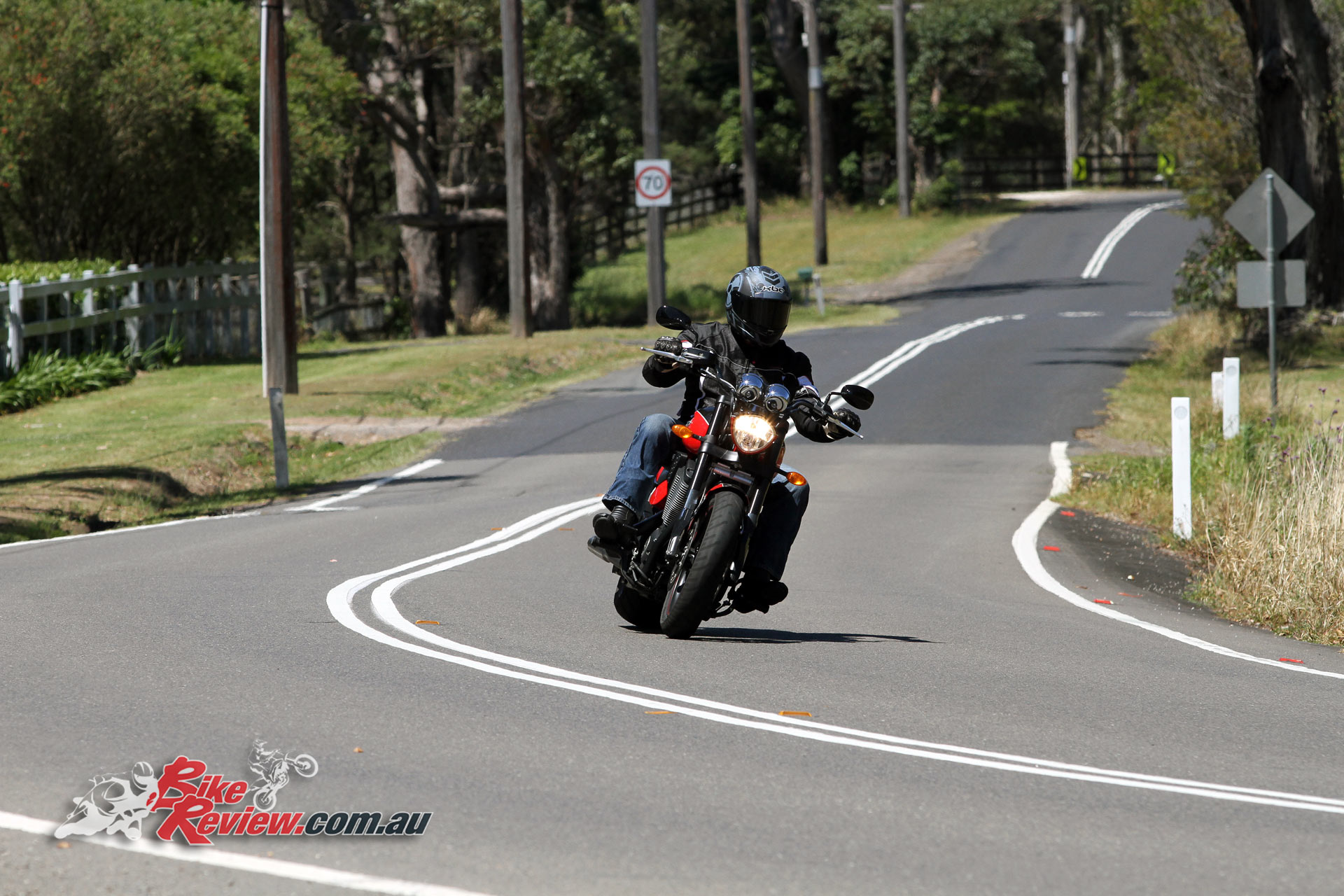 This starts to push your upper body back and then that creates more stress on your arms, hands, lower back and core muscles.

My feeling is that the ‘bars are too far back, which makes them close to the rider and therefore the rider can’t lean into the air pressure at speed to counter the forces. I would like to see lower and further forward ‘bars on the bike to help make you lean slightly forward. 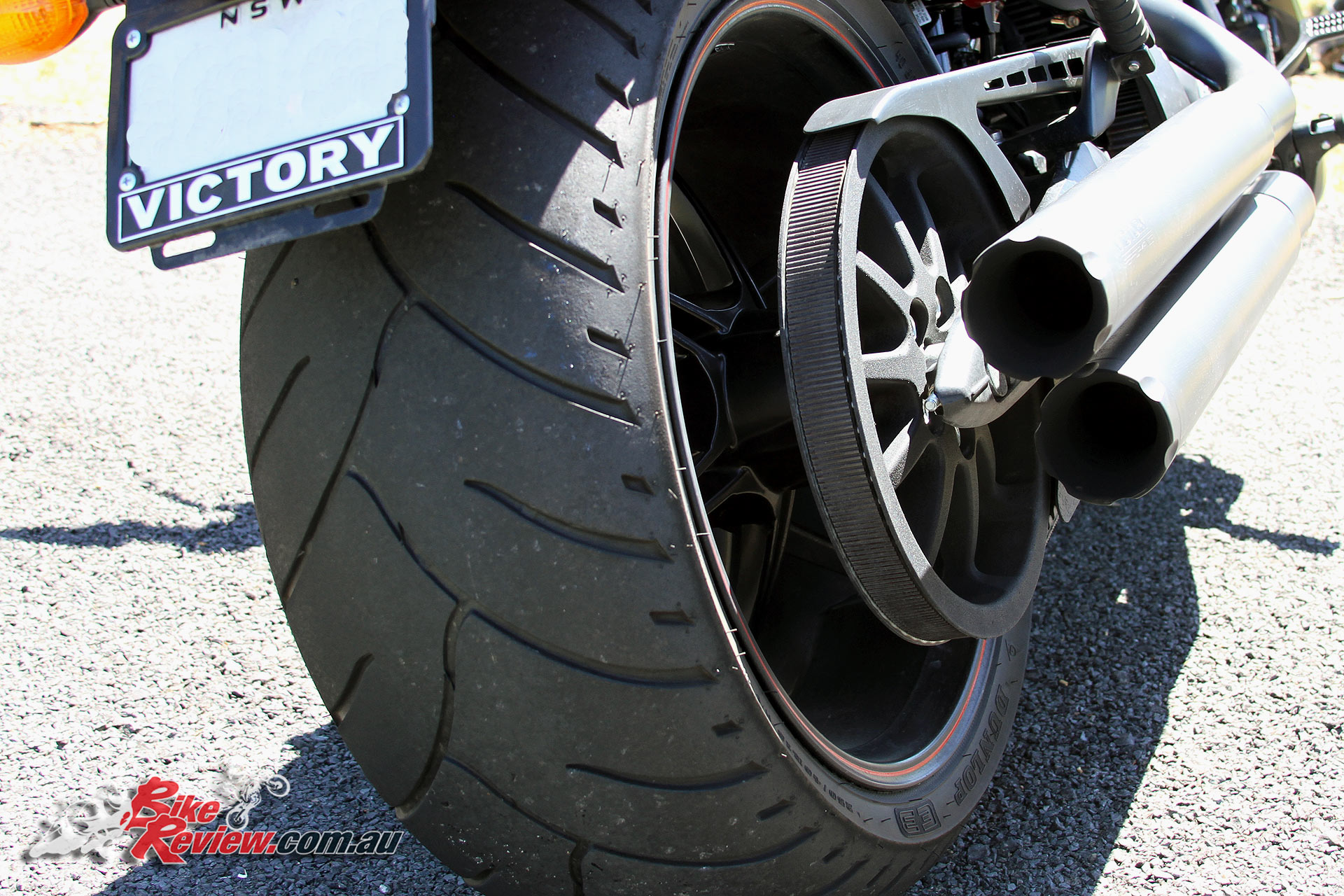 The rear tyre, although one of the biggest styling cues of the past two decades is a disaster as far as I’m concerned. It causes the bike to track poorly over anything other than pool table smooth roads.

On rough roads with directional joins in the bitumen the bike just has a mind of its own as to where it wants to go. The shear width of the thing means that it picks up every high spot, low spot, join or any other irregularity on the road and moves the back of the bike terribly. 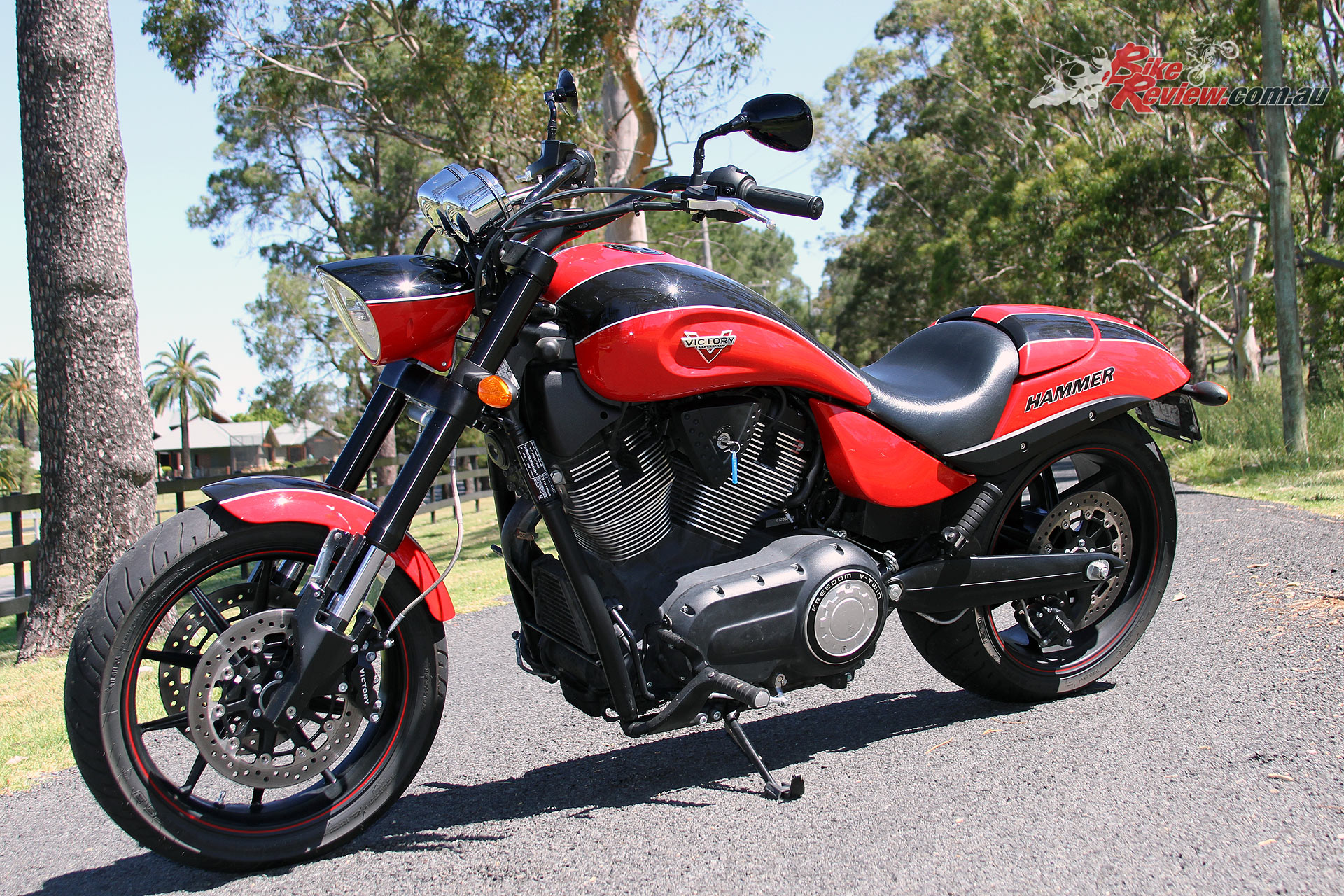 At times it was really scary trying to hold the bike on a line, even when vertical. In the corners it was the same problem, the bike, because of the 250mm rear tyre, just doesn’t want to tip onto a corner as you want it to.

The tyre resists the initial tip in which makes the front want to run wide and by the time you can get it over further it has already pushed the bike off line. 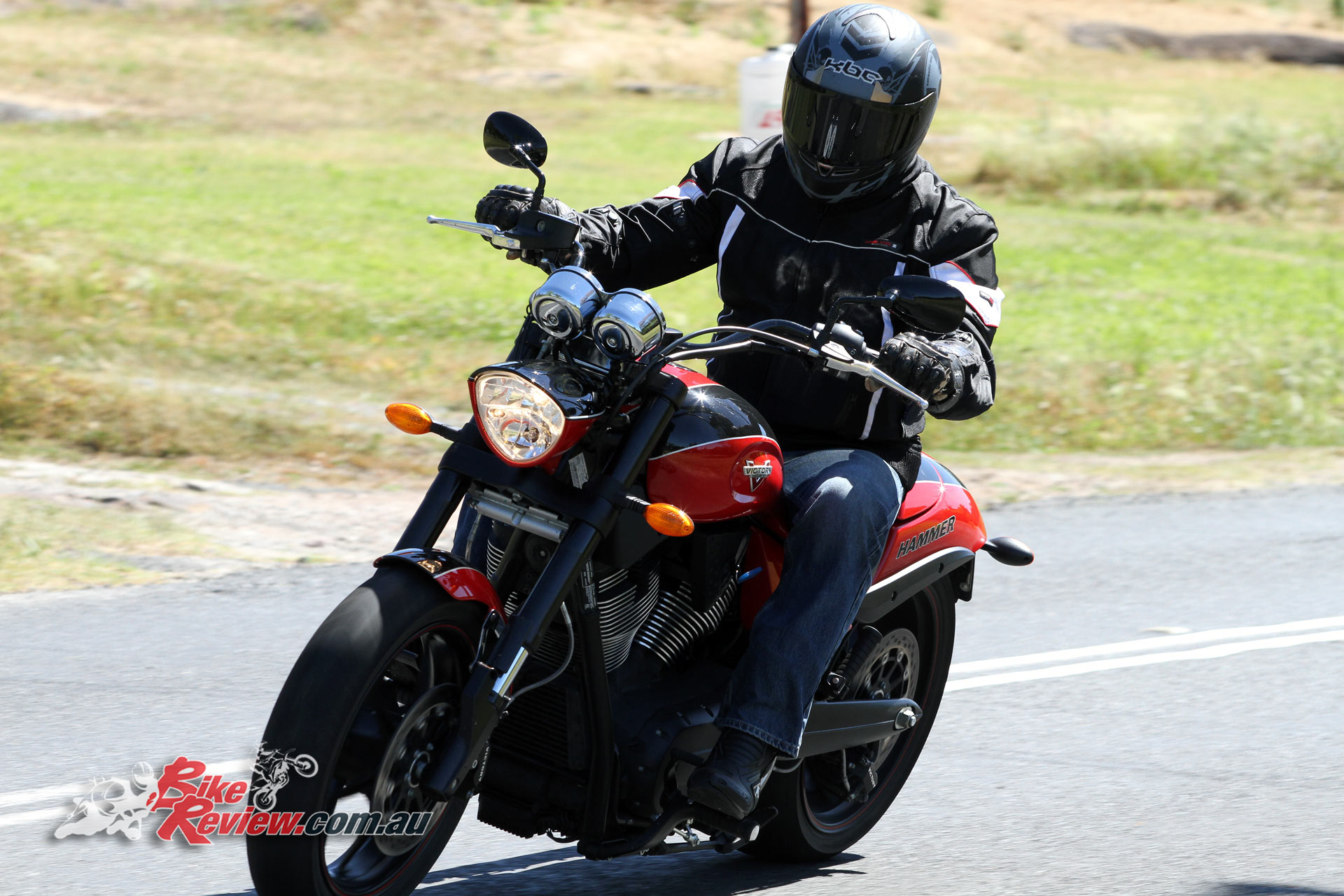 It took a lot of time to come to terms with this and then adapt my riding to try and accommodate the rear tyre and associated handling.

I must admit, I did have some fun coming up through Kangaroo Valley on some of the bends once I was very deliberate with my riding style. Ground clearance was actually above average for this type of bike and there were no chicken strips left on the tyres by the end of the valley run. 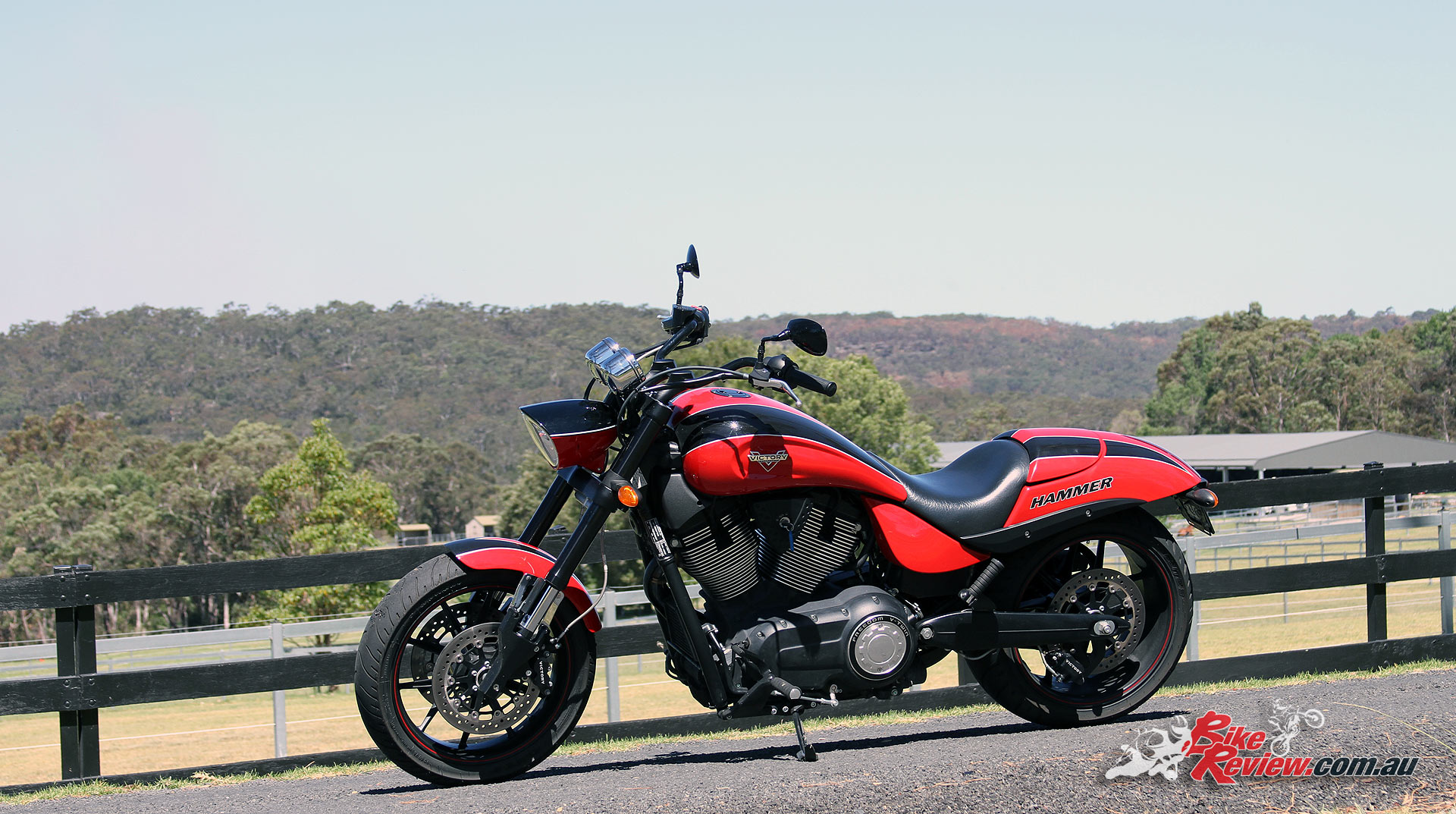 The positive aspects of the Hammer are plenty.

The engine is 106 cubic inches or 1731cc, it’s a big V-twin with tons of torque (113ft-lbs) and ample horsepower (97hp). There are four-valves per cylinder and air/oil cooling, fuel injection and a six-speed gearbox.

The drivetrain package is exceptional ! Even though this particular bike had a more free flowing exhaust, it was clear that the way in which this bike can deliver the power and acceleration is very good. It is simply better than what the others have for 2016. 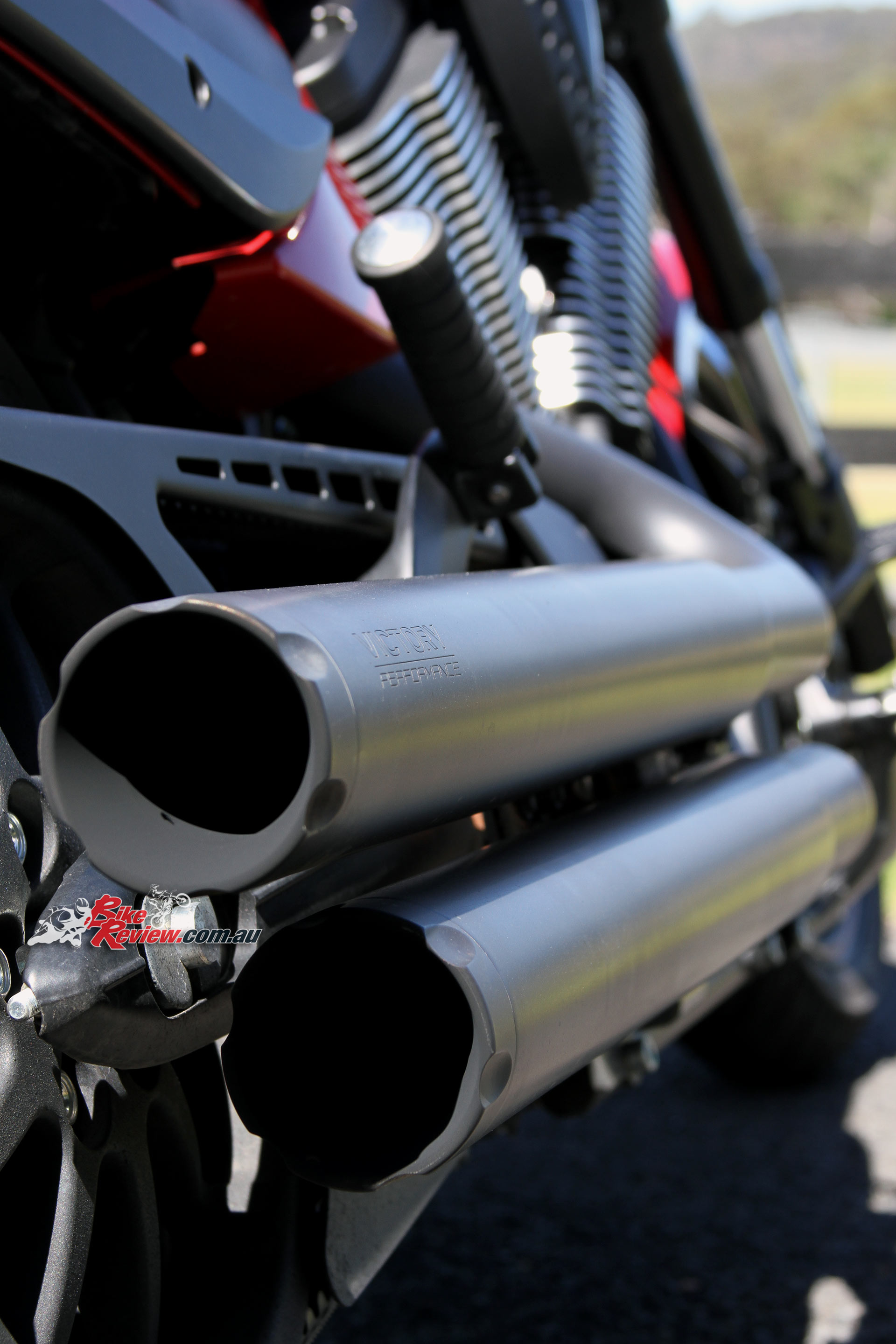 There was never a moment that I felt I was caught short not having enough power for the situation, passing was simple and quick, there was no delay in the power and it came on strong from low in the revs and was enormous for a big twin.

The gearbox is an absolute gem, it has the right ratios to offer a gear for any condition and is silky smooth in its operation on both up shifts and down shifts. The clutch is light and offers good feel for those starts from the lights or leaving the kerb. 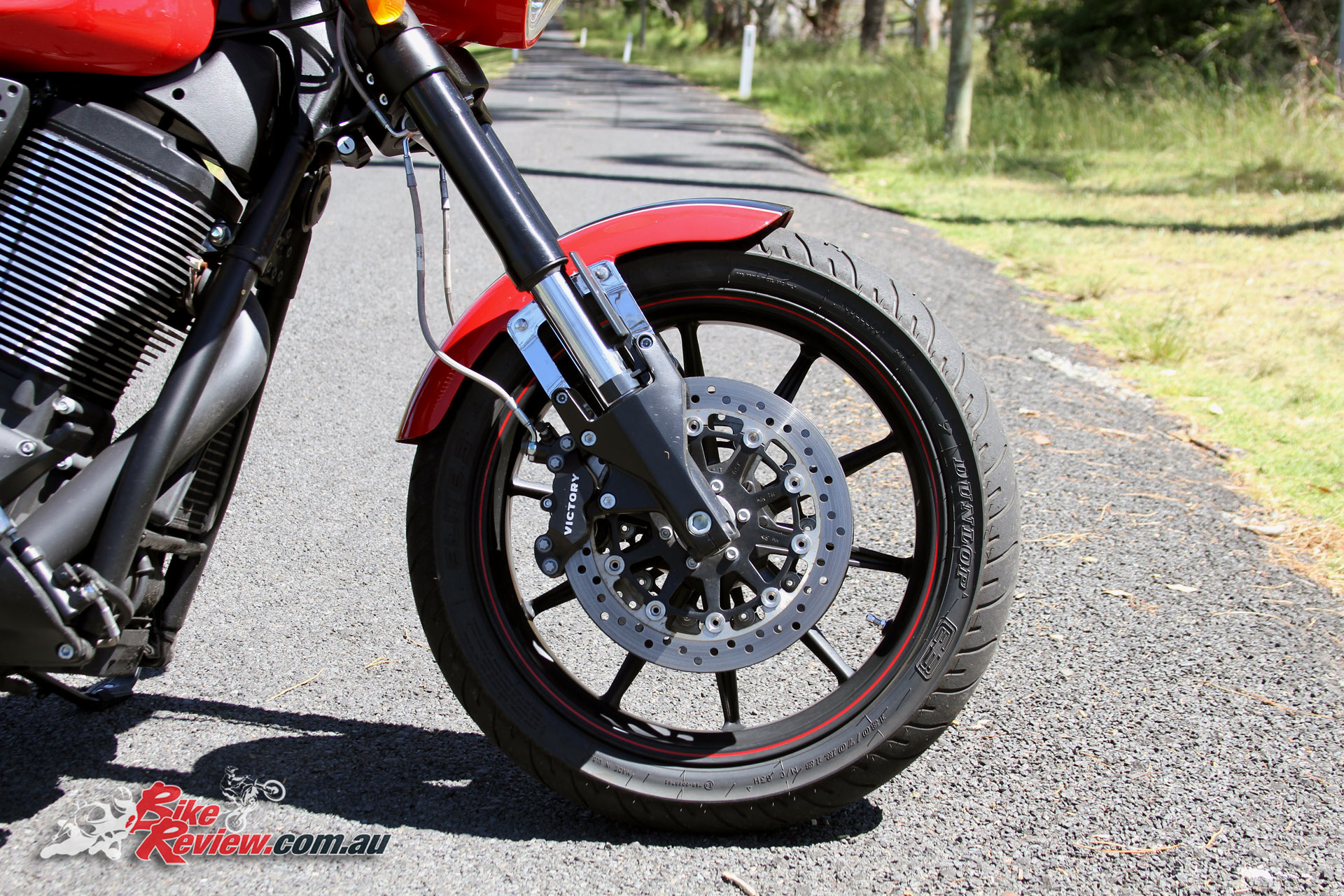 The brakes on the Hammer are very good, with twin 300mm rotors and four piston calipers doing a great job at slowing the bike from speed. They were strong and predictable and showed no signs of fade even when pushed hard, very pleasing to find on a cruiser.

The front tyre is also a perfect choice, the 130 section by 18in diameter tyre is well suited to the forks and brakes of the Hammer offering great feel and feedback as you explore the limits of the bike. 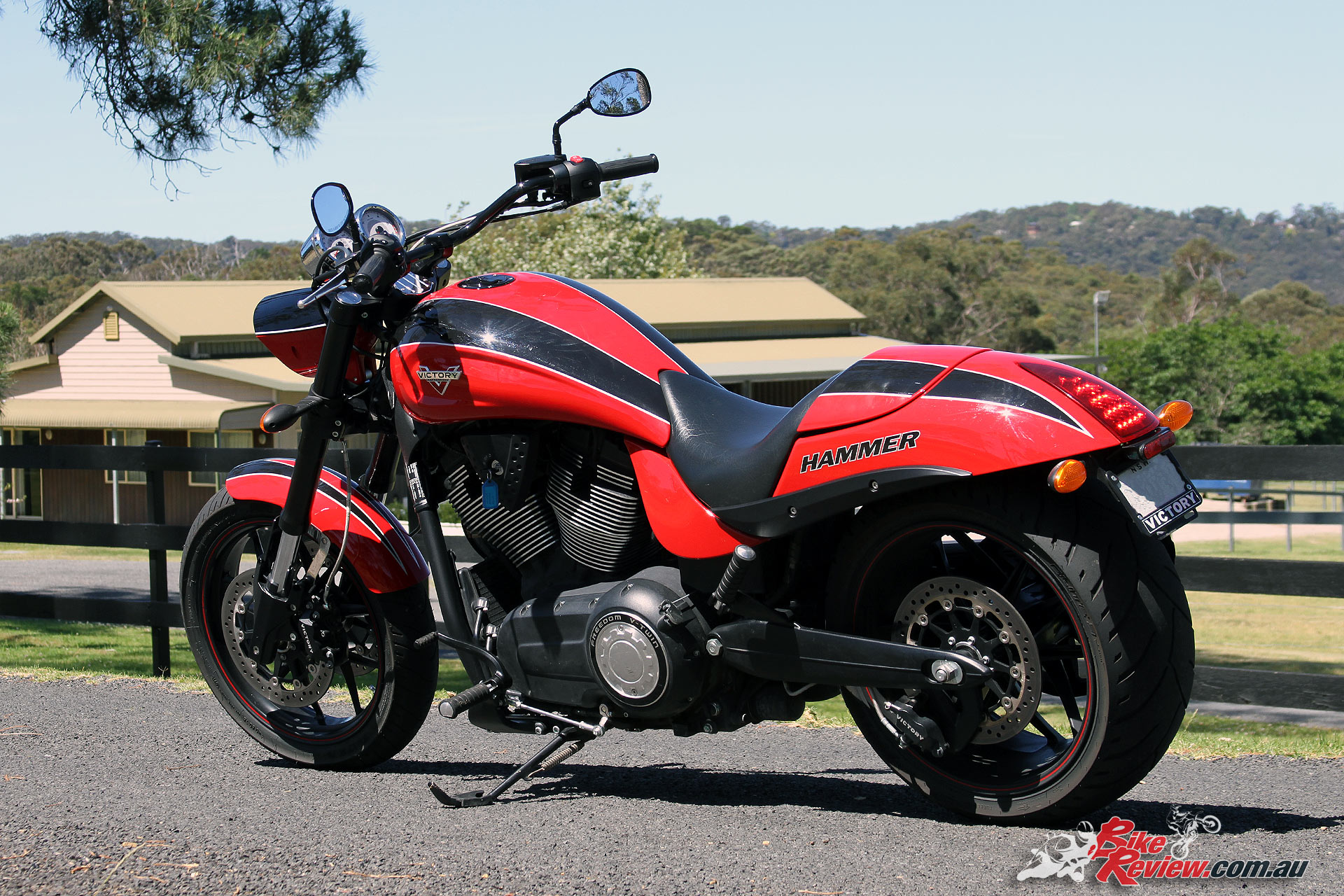 The bodywork is real retro with the red overlayed with the black speed stripes found on hot rods back in the 50’s and 60’s, it suits the Hammer and gives the bike a presence that says, “Hey I’m here to stay, so try and keep up.”

Foot controls are well placed and functional, with a minimalist look that suits the theme of the Hammer. The switchblocks on the bars though, are far from minimal in their style – big and ugly is the best way to describe them. The levers and mirrors are good. 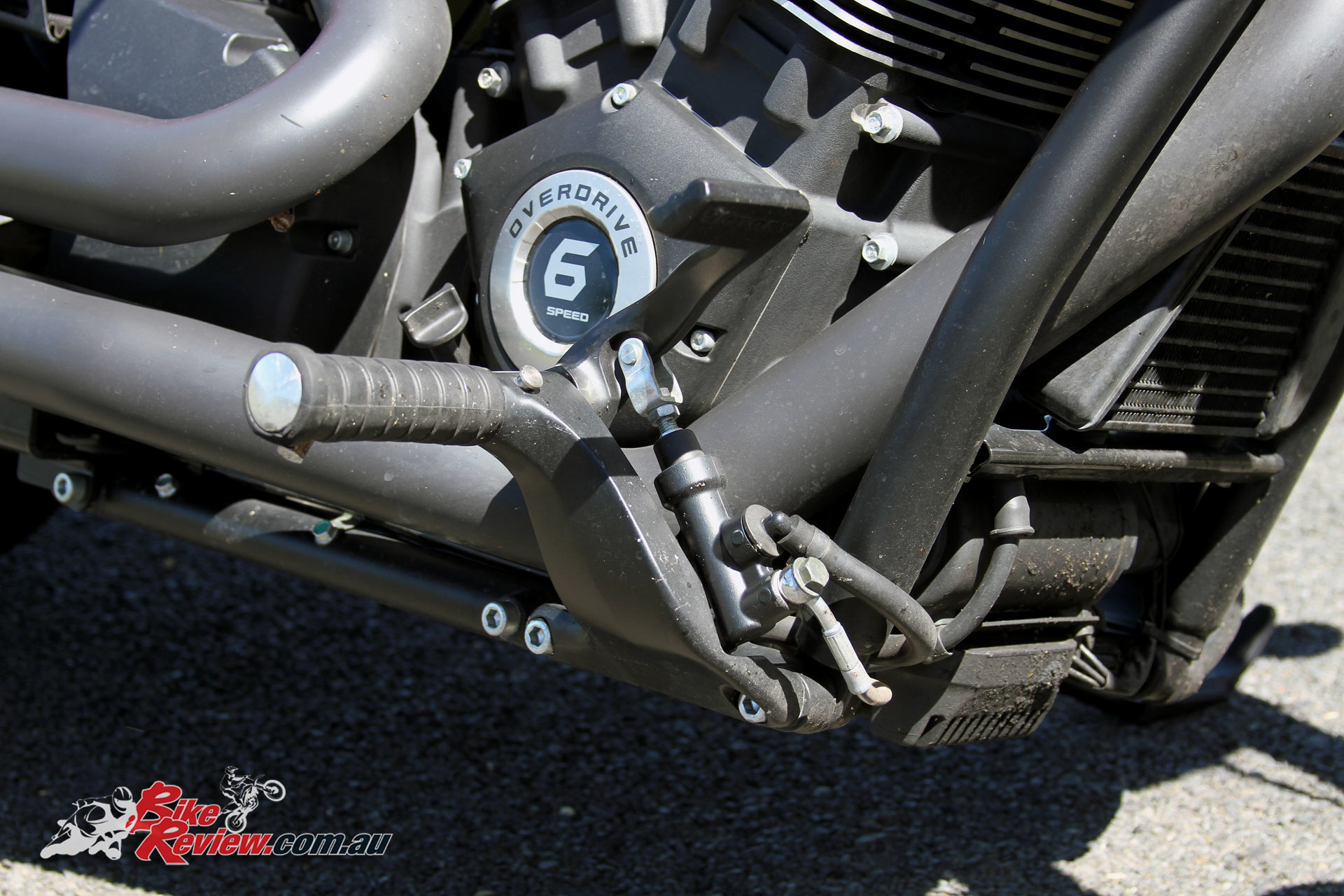 The speedo is also nice, I like how the speeds are very open and visible up to 110km/h and then the rest of the speeds are smaller and closer together after that, a nice touch. 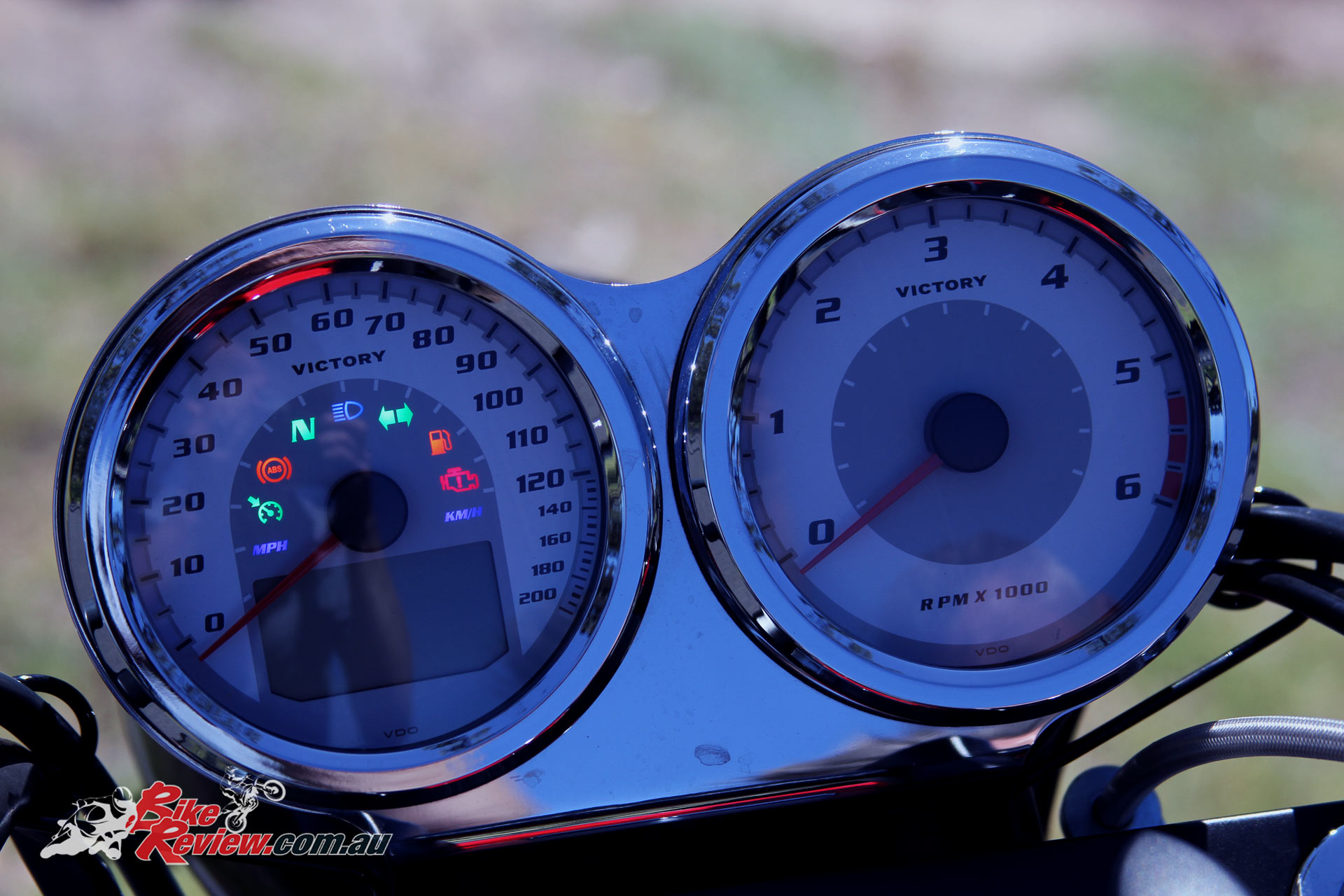 The overall look of the bike is nice, it appeals to the hot rodder with the paint work and styling and that massive back tyre adds to that look and style.

With virtually no chrome on the bike and the finishes done in black it has that darker element to it as well, which all adds to the sport cruiser styling of the Hammer.

Not everyone will like the bike, but then that is what it is all about, we all like different things and we all want to have our own personality come through with the bikes we own. 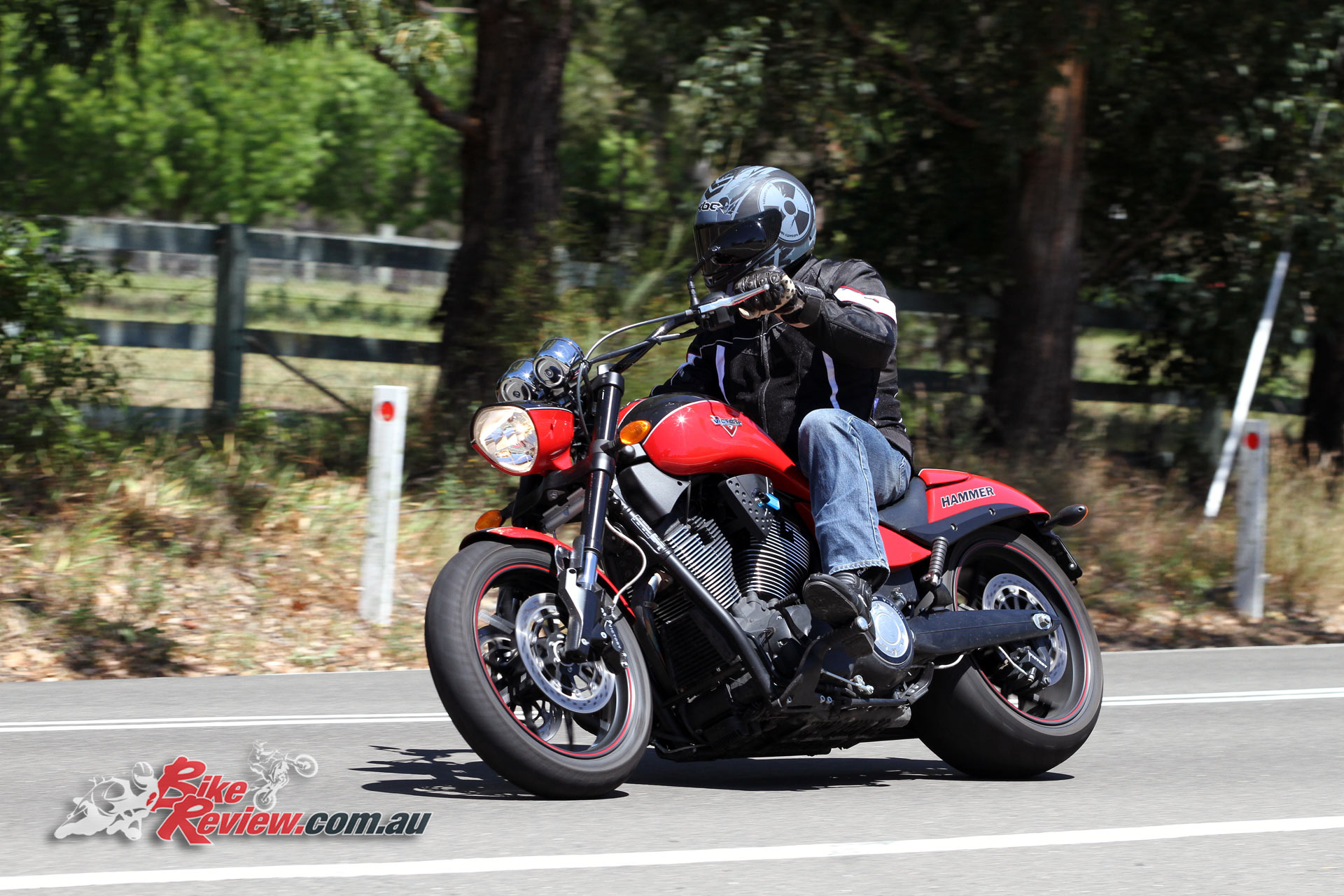 If the sport cruiser is where you want to be and what you want to ride, then the Victory Hammer S would be a bike to consider. It’s not a racer, it’s not an off road tourer, it’s not a big full bells and whistles tourer either.

Yes it has some faults, but there are very few bikes out there that don’t have faults. But purchased with a proper understanding of what this bike was built for, and then ridden within that design brief, you’ll have a long and lasting relationship with the Hammer. 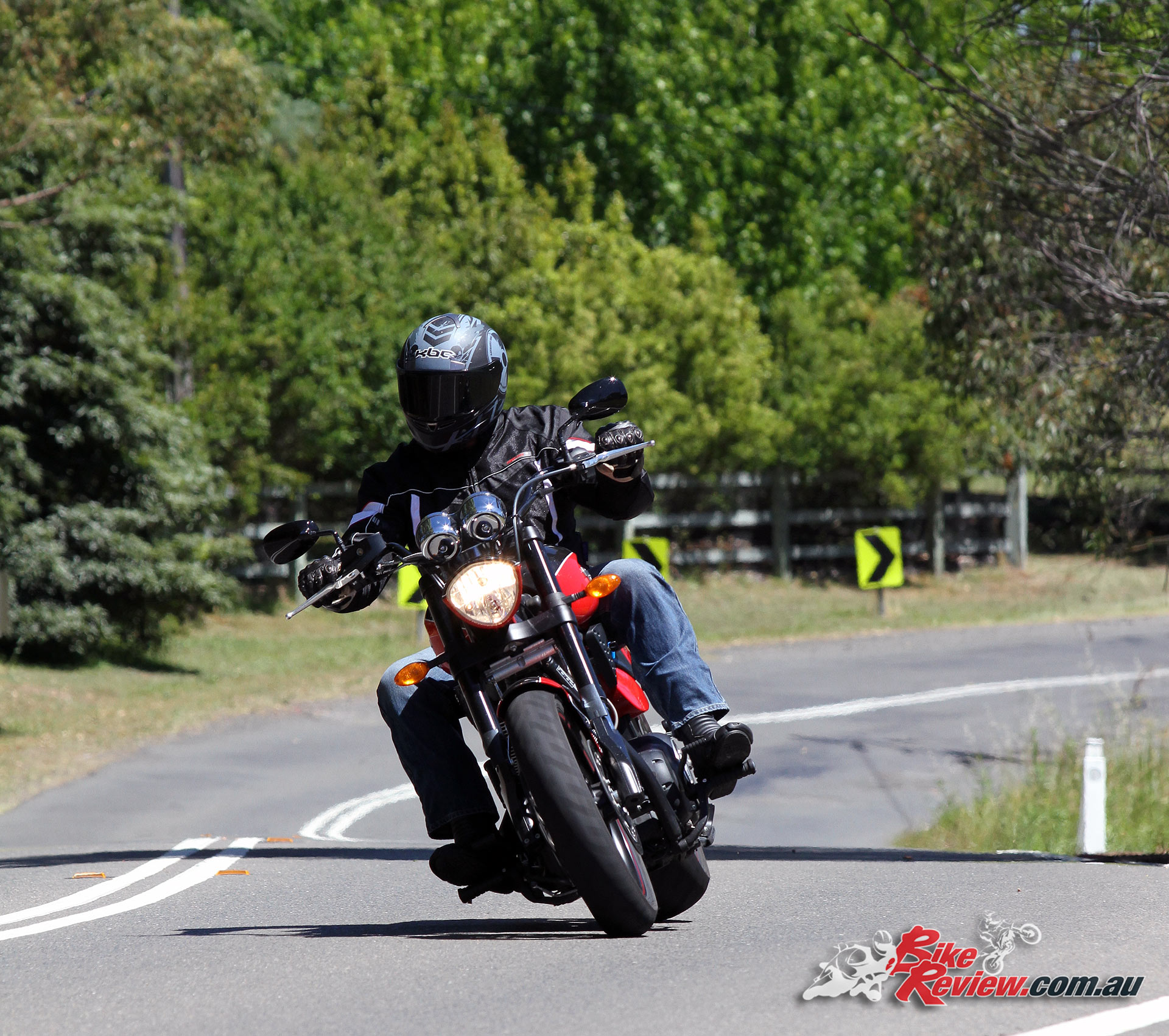 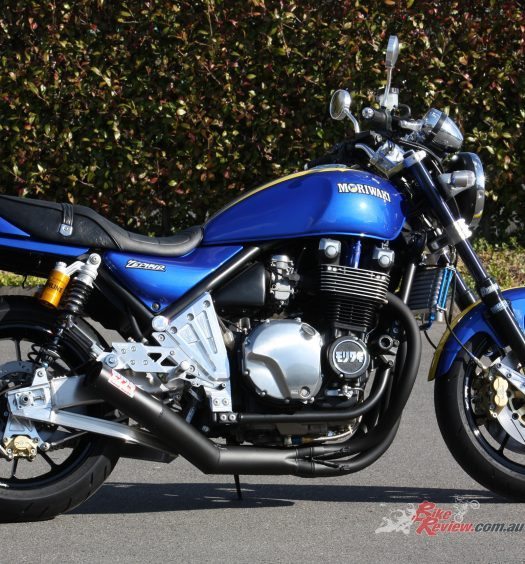 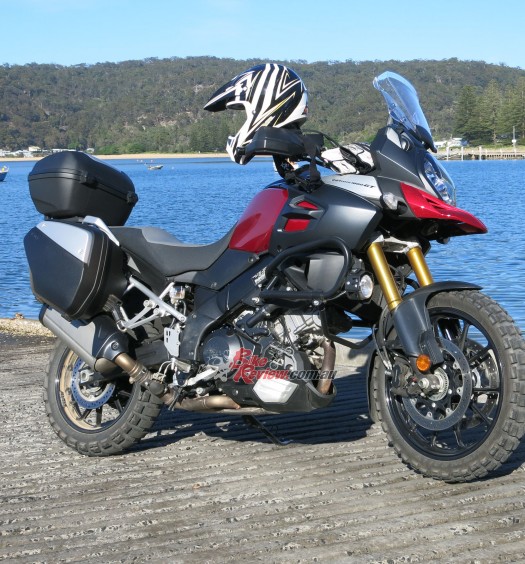