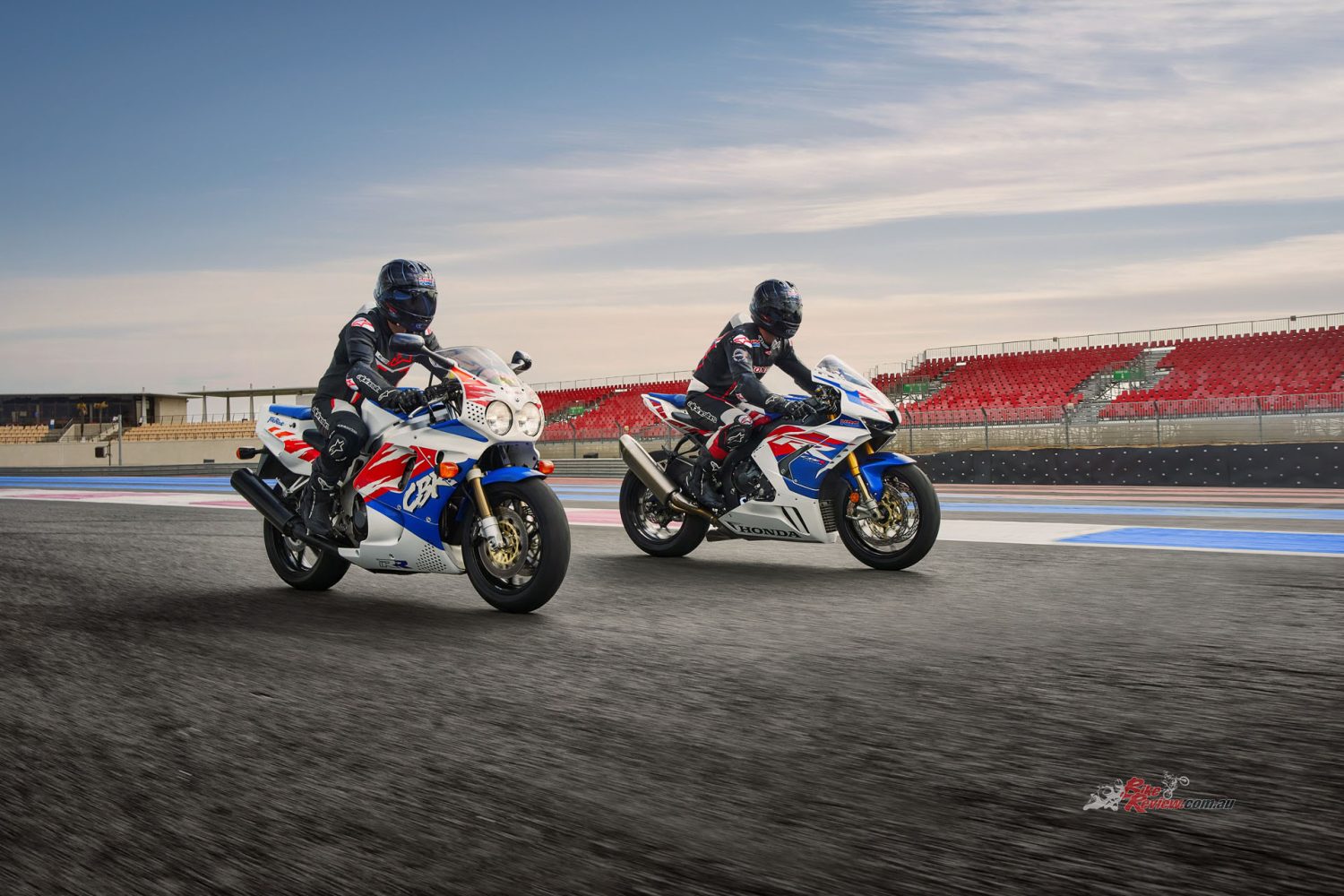 2022 is an important anniversary for Honda, and its Fireblade, as it marks 30 years of what has proved, over time, a truly seminal sports machine. The CBR1000RR-­R Fireblade SP 30th Anniversary will be available for in a limited edition, instantly ­recognisable paint scheme. 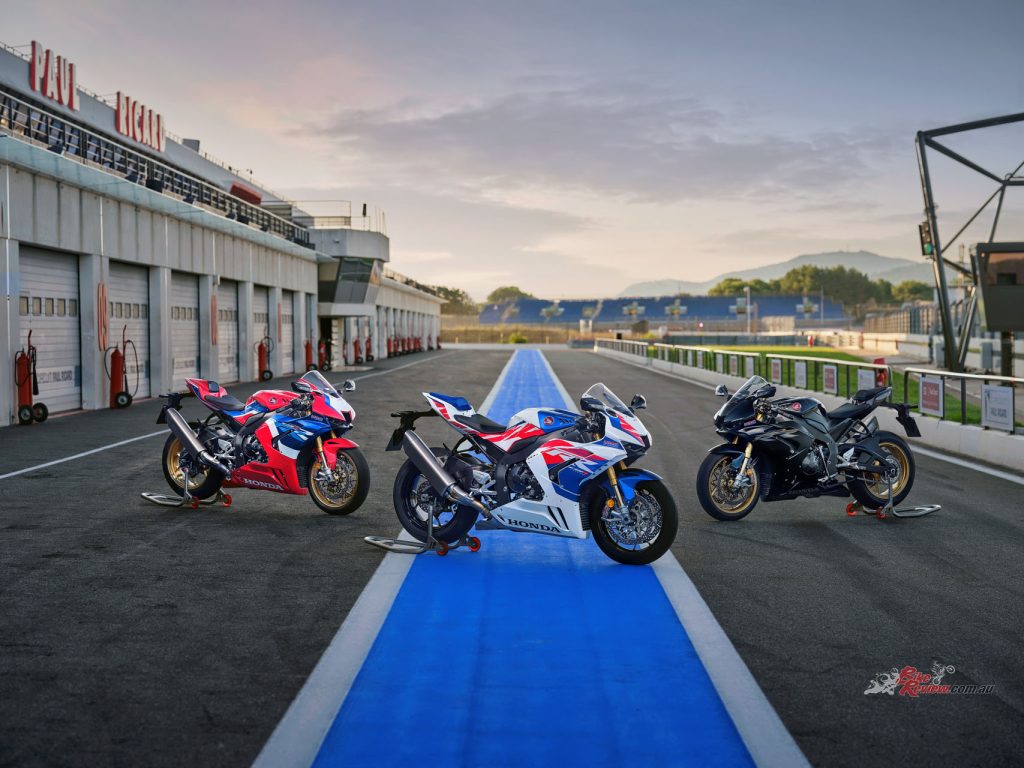 We have to say that we are massive Fireblade fans here at BikeReview, with Ed Jeff a bit of a Blade nutter. He has been lucky enough to have an original Tiger Stripe Blade, a Repsol Blade and ridden lots of special Fireblades from turbocharged ones to racers including Johnny Rea’s Ten Kate WorldSBK and many of the Team Honda Australia factory ASBK bikes. He has also ridden a very trick Fireblade endurance racer at Motegi, Japan, so to say Jeff is a fan of this special edition is an understatement! We have also tested every model Fireblade from 2001 to 2017. 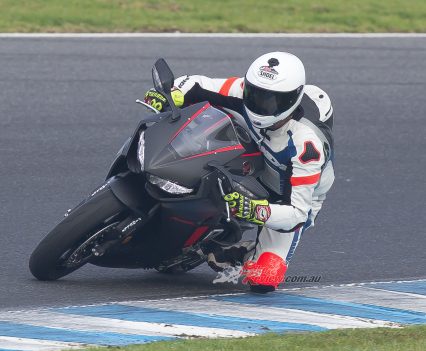 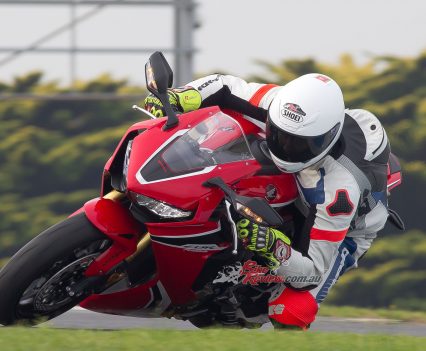 One of a few SHOEI race lids over the years, the X-Spirit III. 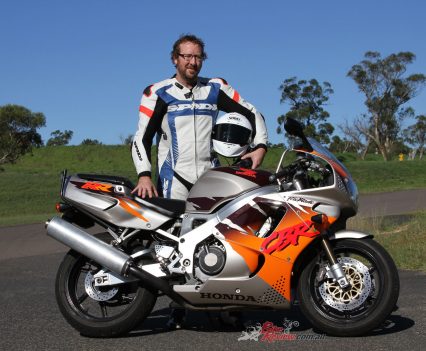 I got this 1994 original one owner Fireblade from my wife Heather Ware for my 40th birthday. This shot was taken after my first ride on it. 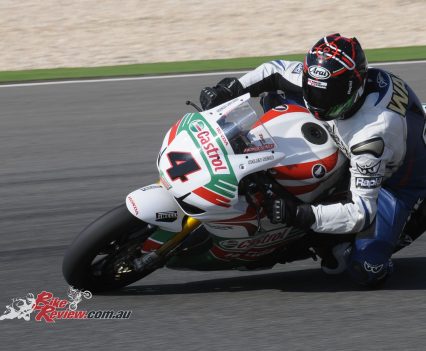 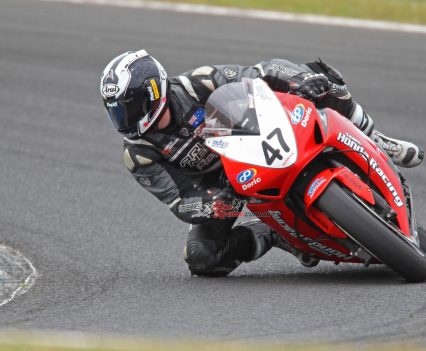 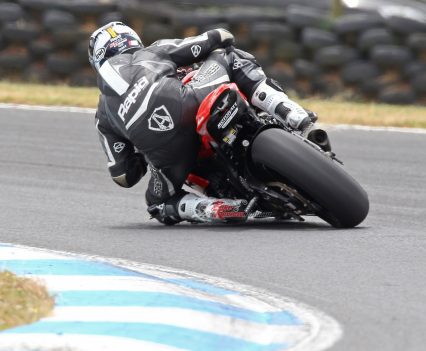 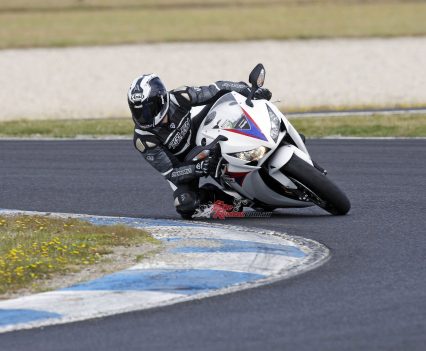 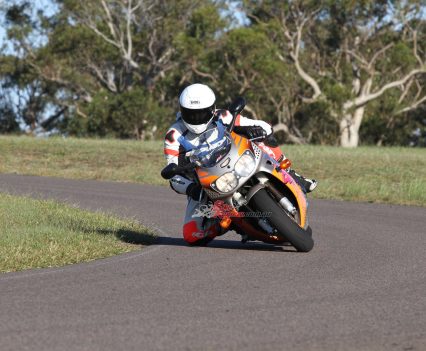 To celebrate the original, ground­breaking Fireblade of 1992, a Limited Edition ‘Tricolour’ paint scheme will be available for 22YM, designed by Mr. Hiroaki Tsukui, who was also responsible for the original 1992 colour design. Instantly recognisable, all the details are present and correct, with the ultra­modern feel of the 20YM stripe layout merged with ‘brushstroke’ style elements that pay clear homage to the seminal original. The blue rear seat continues the theme.

Check out our review of the 2020 Fireblade SP here….

Other further details set it apart. On start­up, there’s a ‘Ring of Fire’ screen animation as the display loads. The unique serial number for each bike is laser ­engraved on the top yoke and 30th Anniversary logos – on the fuel tank cover, the Smart Key fob, and laser engraved on the Akrapovič muffler – place a subtle extra special stamp, marking the CBR1000RR-­R Fireblade SP 30th Anniversary’s own place in Honda history. 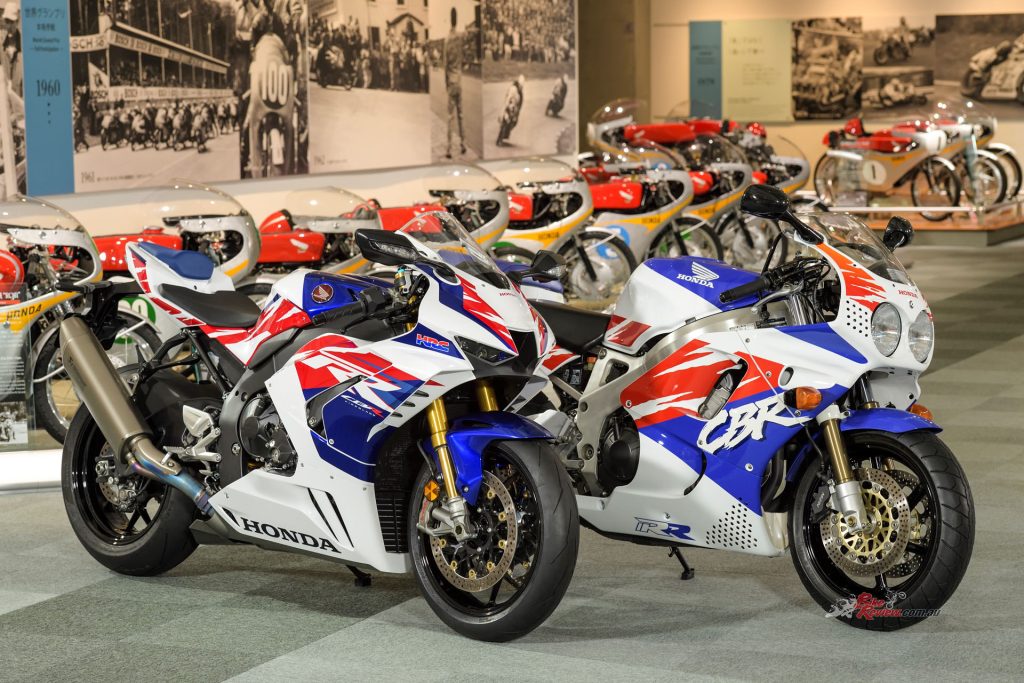 The 30th anniversary livery is instantly recognisable as it draws inspiration from the original ‘blade.

The Fireblade SP’s inline four -cylinder engine delivers 112Nm@12,500rpm and makes peak power of 160Kw@14,500rpm. Updates for 2022 centre around upping mid­ corner drive and acceleration. Firstly, the rear sprocket goes from 40 to 43 teeth, improving acceleration through the gears in the midrange while maintaining high ­rpm output. Both airbox and intake funnels have been re­shaped to smooth flow. The intake ports have been adjusted to increase airflow velocity while exhaust flow into the catalyser (and the catalyser itself) has been optimised. 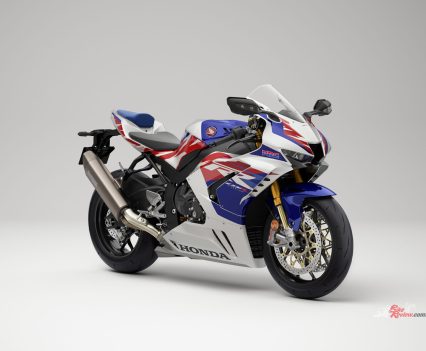 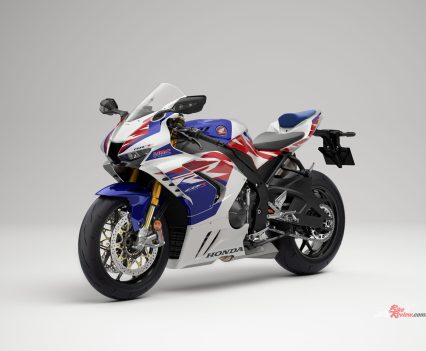 This special edition will only be available for 2022.

Throttle By Wire (TBW) spring load has been reduced, for improved linearity and response on opening. Using extensive feedback from racers around the world – including Honda’s HRC World SBK team – Honda Selectable Torque Control (HSTC) has been refined to offer the rider the power, grip level and feel they want, and to match the increased drive. As before, three default riding modes cover most conditions with options to fully adjust Power, Engine Brake, Wheelie Control and HSTC. The electronics package also includes adjustable Start Mode and standard ­fit, newly revised, quick shifter. 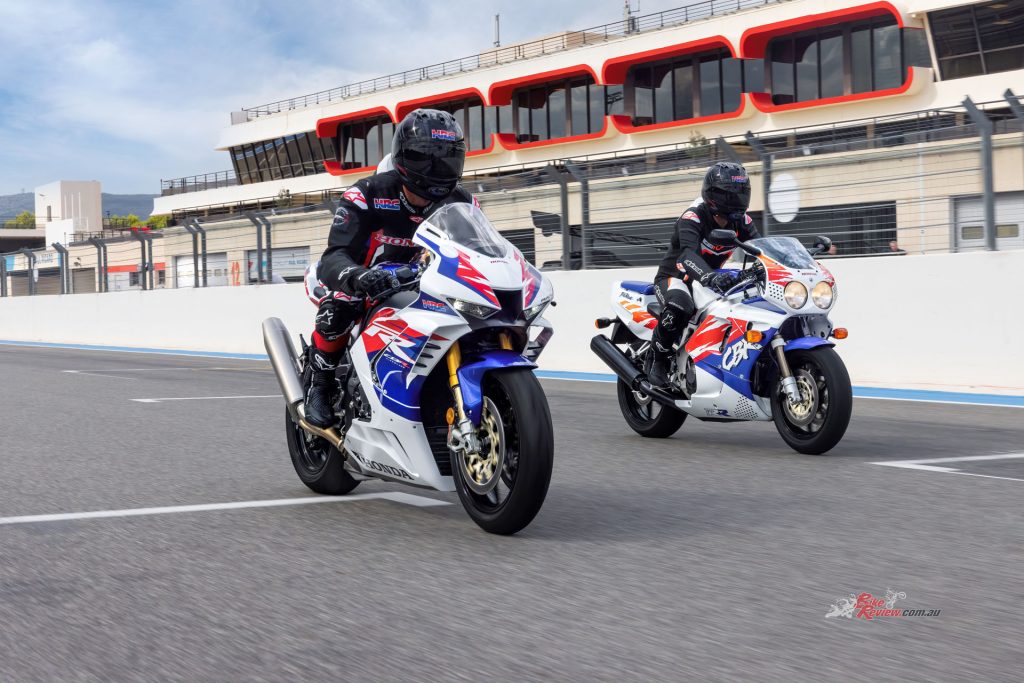 “The engine uses a compact, short­ stroke layout, sharing the bore and stroke of the RC213V…”

The engine uses a compact, short­ stroke layout – sharing the bore and stroke of the RC213V – and features a semi ­cam gear train, finger ­follower rocker arms, titanium conrods, RC213V­S internal friction reduction technologies, piston jets with check ball system and a built­in bottom bypass passage for the cylinder water jacket. A ram ­air duct in the front fairing feeds directly through the headstock. The 4­2­1 exhaust downpipes are ovalized and feed a titanium Akrapovič end­ can. 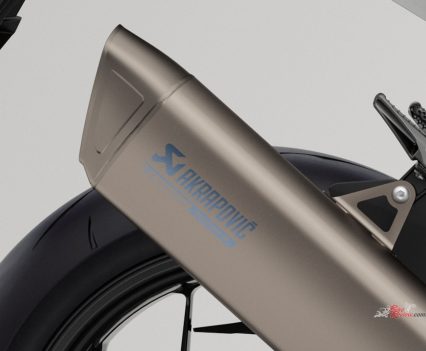 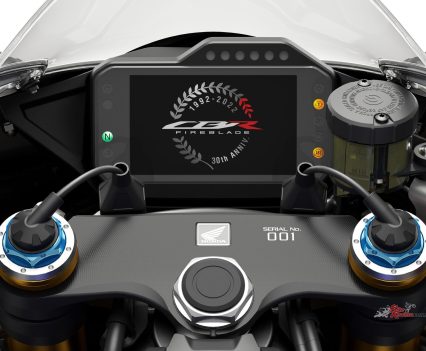 An aluminium diamond frame uses the rear of the engine as upper shock mount while the swingarm is based on the RC213V­S design. The rigidity balance, weight distribution and steering geometry are carefully adjusted to exploit the engine’s output, in terms of front and rear grip levels, and feel for both. A six ­axis Inertial Measurement Unit (IMU) provides accurate 3D estimation of riding dynamics and provides input to manage all of the electronic systems. It also controls the rod­ type 3­level Honda Electronic Steering Damper (HESD). 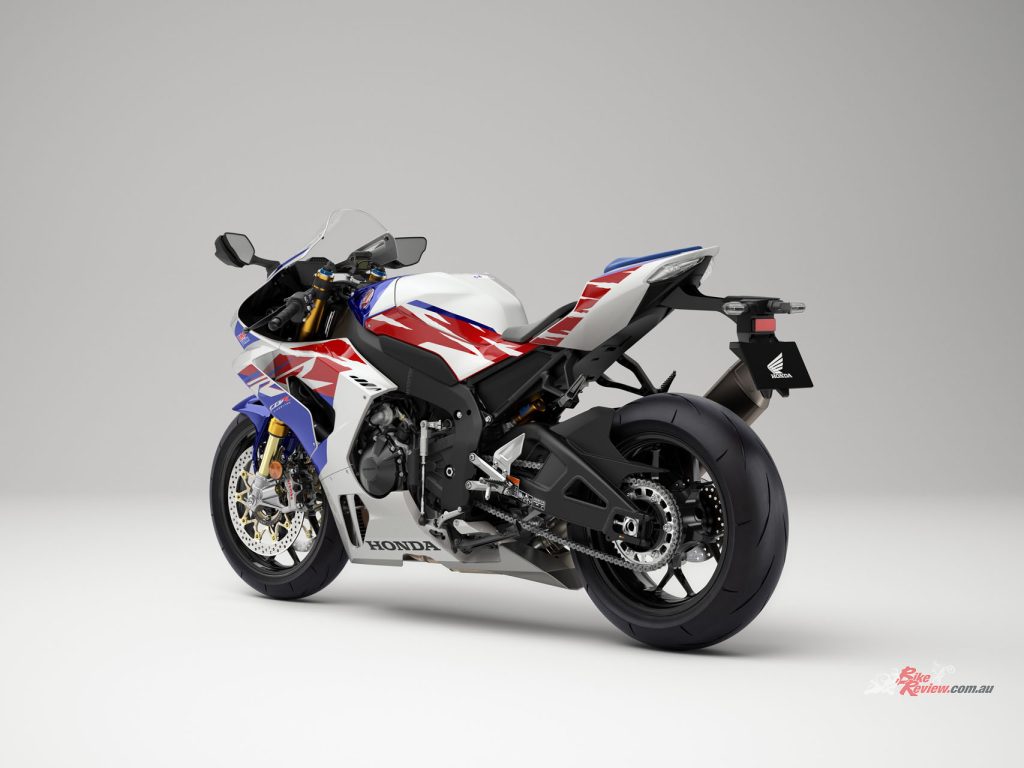 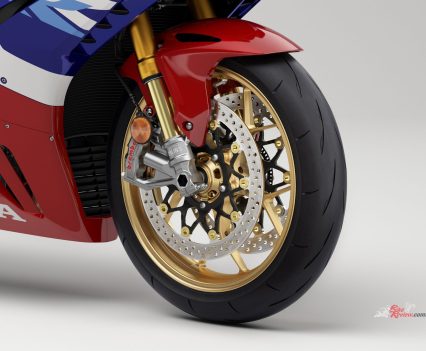 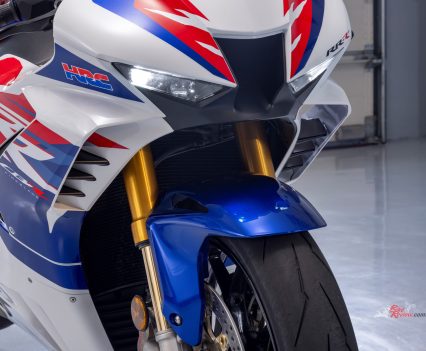 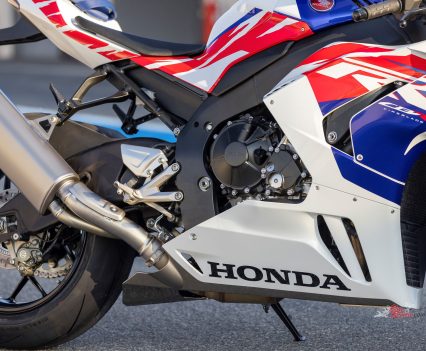 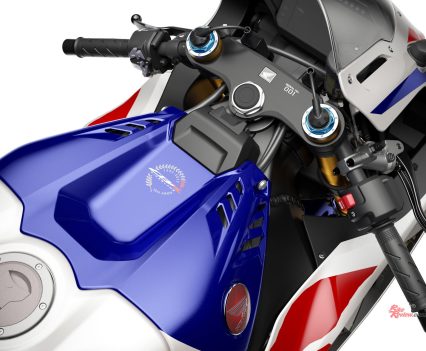 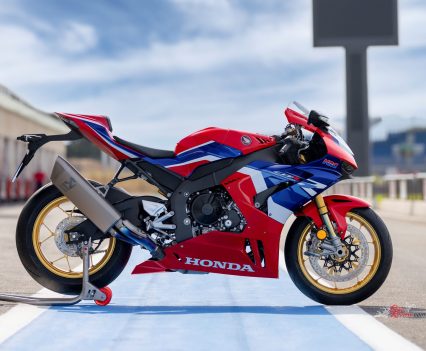 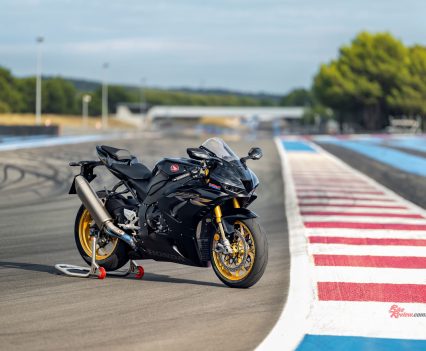 The 22YM CBR1000RR-­R Fireblade SP will be available in Grand Prix Red and Mat Pearl Morion Black, both now with gold wheels and new HRC logos, and an evocative paint scheme from another era: CBR1000RR­-R Fireblade SP 30th Anniversary. No price info for Australia as yet. 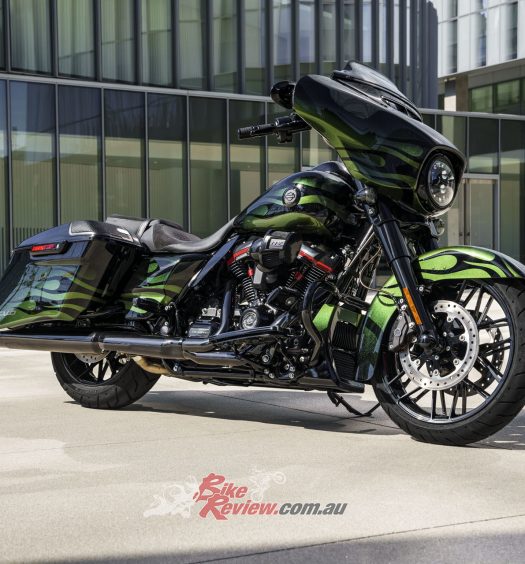 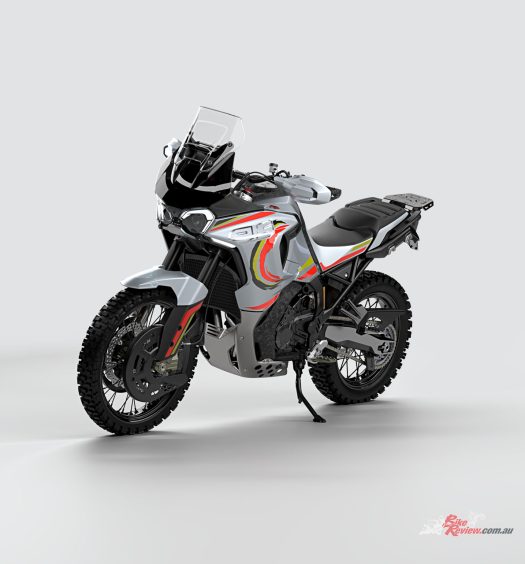