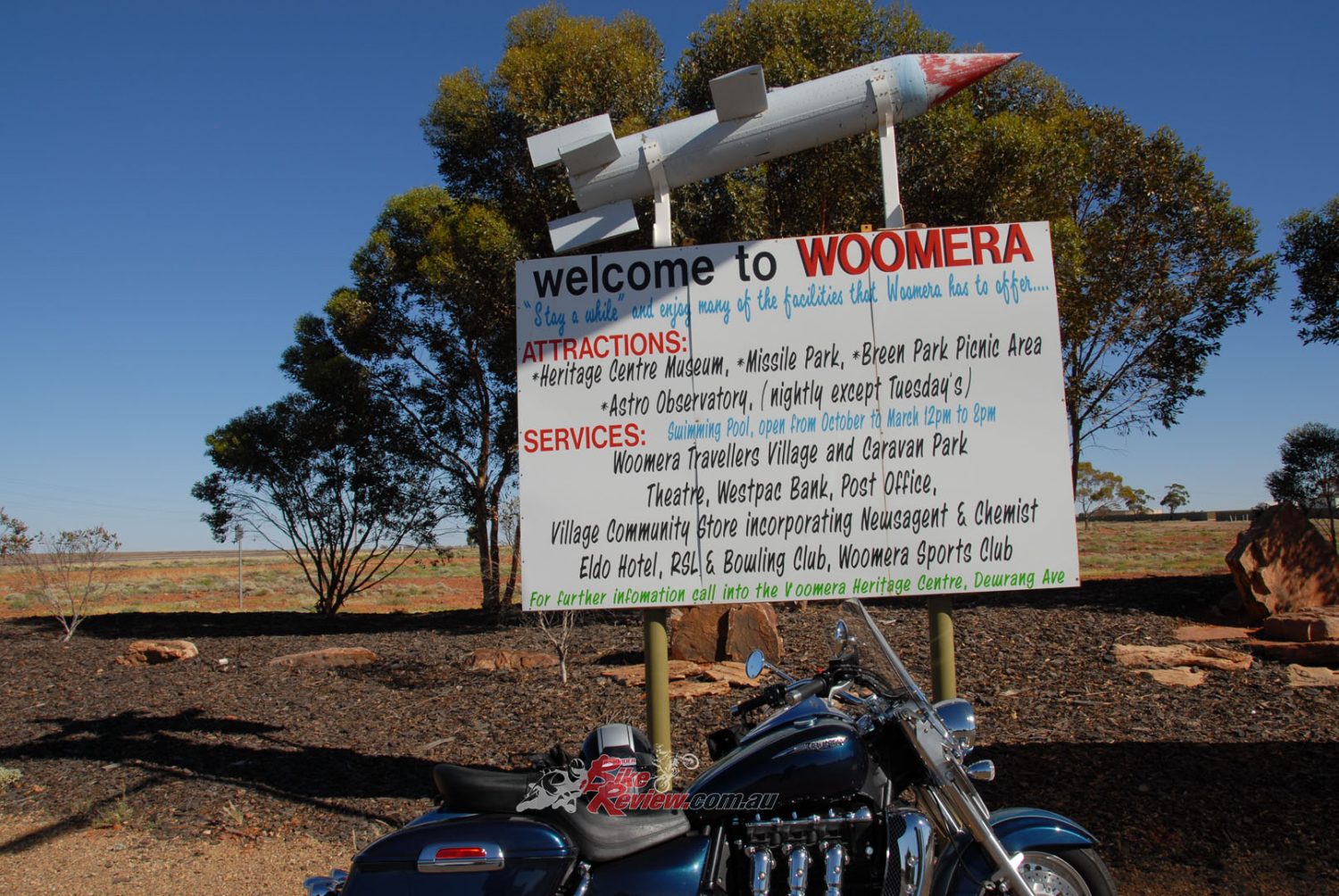 Woomera, South Australia is a part of Australia history that isn't spoken about. The Bear headed out there to give us some motorcycle travel tips... Words & Photos: The Bear.

Usually when I set up a ride for myself, I think of where I want to go and then organise a bike. It was the other way around this time. The good folk at PS Imports wanted me to sample a Rocket III Touring, the location that came to mind was irresistible: Woomera. 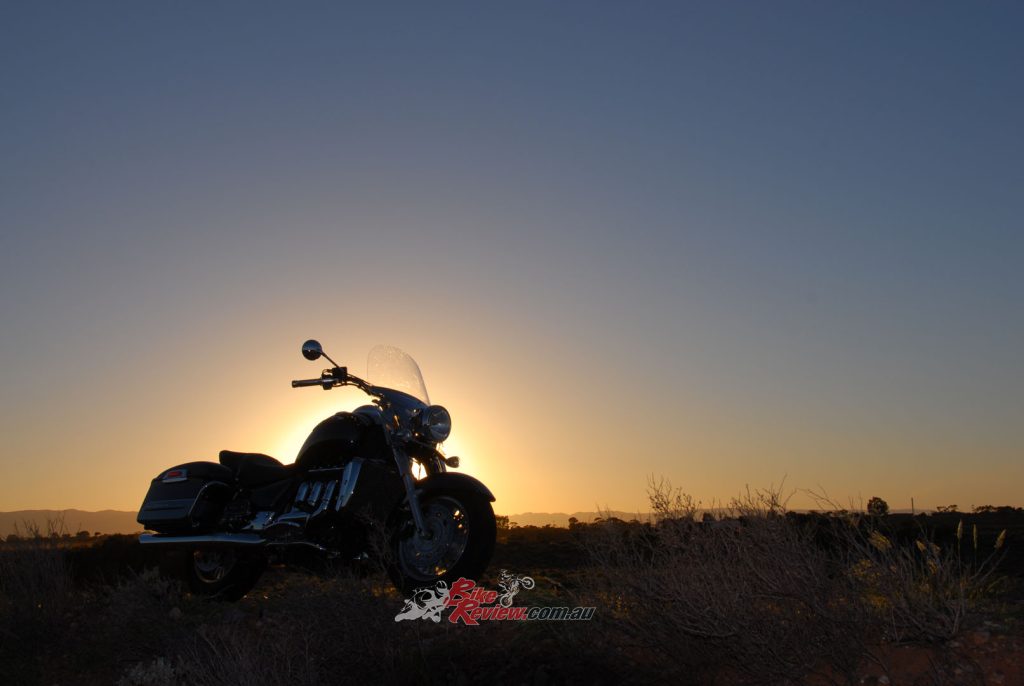 The Triumph Rocket II Touring fits right into the desert scenery – not because it’s flat and barren but because it is big and impressive.

“Woomera Prohibited Area… home to secret military testing, joint defence projects, sheep stations, a controversial detention centre, more than 4000 rocket launches and nine devastating atomic-bomb trials… Each of the homesteads… has its own bomb shelter, although most have rarely been used…” Ken Eastwood, Australian Geographic.

I must admit I thought about it twice. The 180 kilometres from Port Augusta to Woomera along the Stuart Highway could easily be considered to offer… nothing. Unless you really enjoy sandhills and salt pans, I guess. 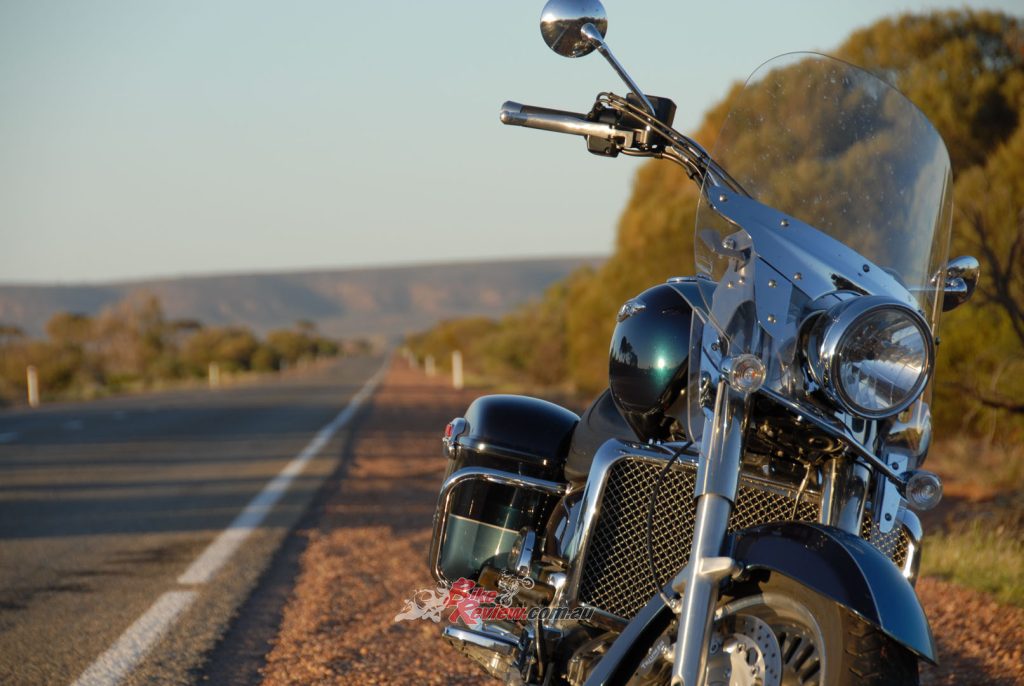 From Lucky Bay to Port Augusta is desert, but not completely. There are still bushes and scrubby mallee.

Interestingly enough, however… but I’m getting ahead of myself. I arranged to collect the Rocket III from Peter Stevens in Adelaide and headed out of town after coffee in North Adelaide. Unlike the countryside to the east and south, Adelaide’s north is kind of weirdly incomplete-looking, a bit like Melbourne on the way towards Donnybrook. Not that it matters; the roads are good, and the miles drop away quickly on the Princes Freeway.

Just after Port Wakefield I turned left onto the B85 to Wallaroo, where the ferry awaited me. Now I did this ride a few years ago, when the original ferry was still running; the new one has finally taken its place and is running on a daily schedule. There is no special reason to take the ferry rather than riding up the Princes Highway if you’re going north, but should you be heading for Perth or points along the way it will save you a lot of dry kilometres. I like it simply because I like ferries. 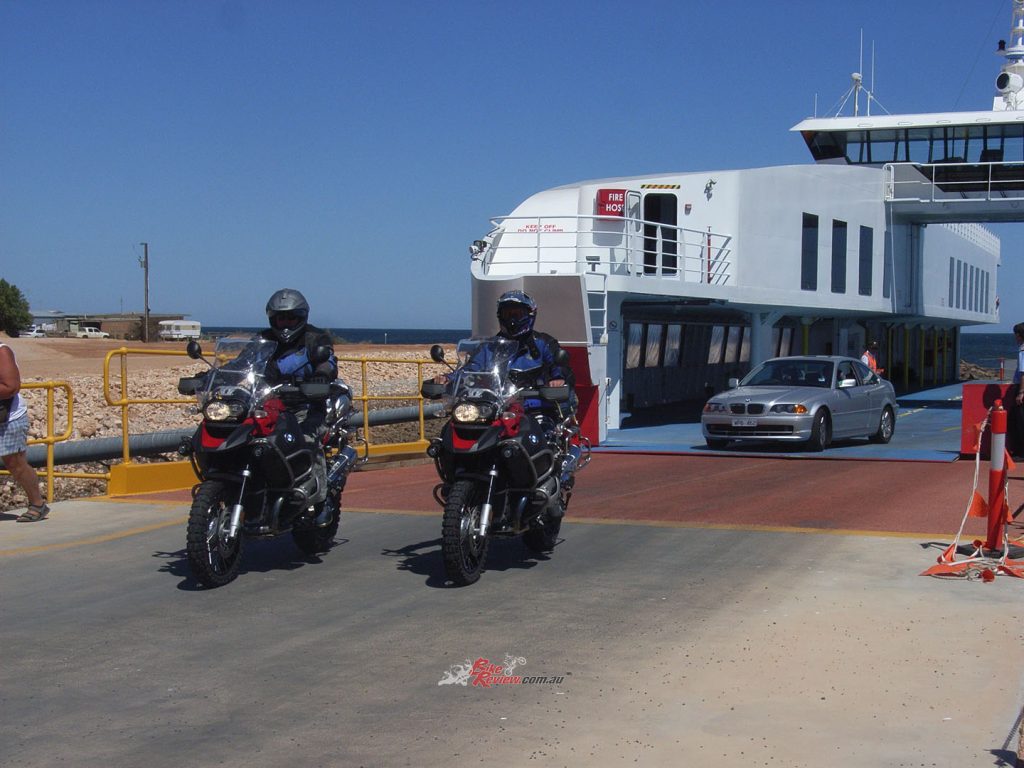 Rolling off the old ferry in Lucky Bay. If you’re heading for Port Lincoln or points west, it is a good alternative to Highway 1 through Port Augusta.

The only notable distraction on the Lincoln Highway, going north from Lucky Bay to Port Augusta, is Whyalla and I have heard people say that Whyalla is a good place to fuel up. Period. I can’t really say; fuelling up was all I did. I have also been known to deprecate Port Augusta, and some years ago the mayor kindly sent me a huge baby’s dummy, ready for spitting. I take it all back because the Standpipe Inn is a gem of a motel, with a wonderful Indian restaurant.

Insider tip: I’ve mentioned stopping by the side of the road at night, I should warn you against riding then. The wildlife might not be visible during the day, but it is definitely there at night!

The thing about riding north on the Stuart Highway, and this is where we get back to that comment above that starts, “Interestingly enough….” is that this road is one of the rides that really shows you the essence of Australia. To say that there is nothing out there is perfectly true. But that is the point. Stop by the side of the road, especially a night, and you are wrapped in a silence that is available in few other places around the globe. The very nothingness becomes a presence that holds you in the cup of its gigantic hand. You are in a world that city folk never see or feel. 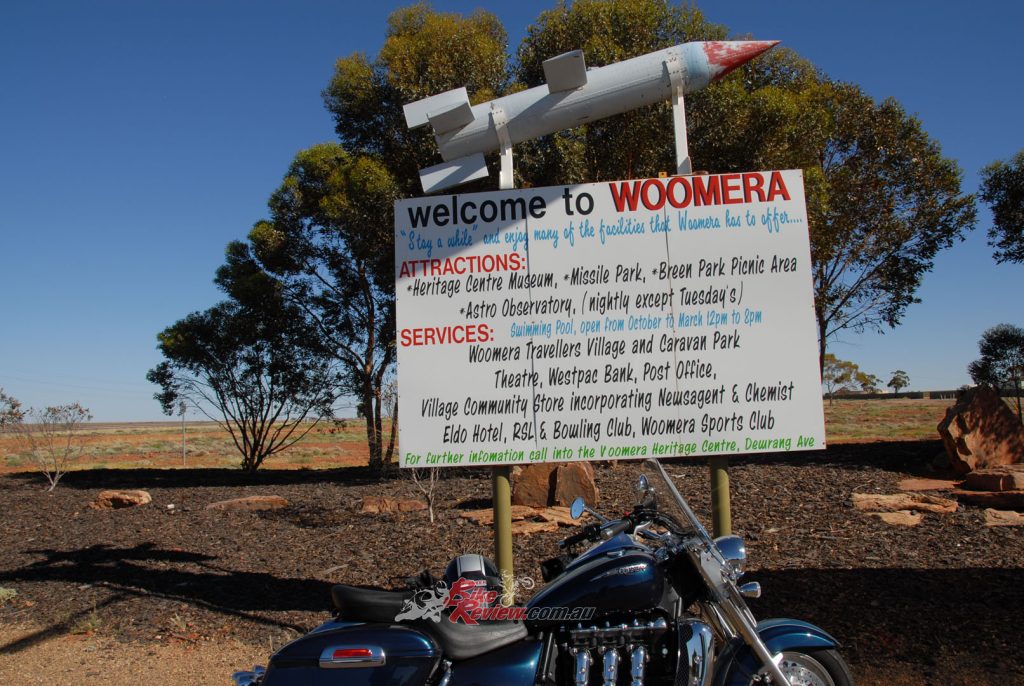 The sign is a good indication of the way tourist Woomera is run now. A bit amateurish and basic, but with a lot of enthusiasm and pride.

Spud’s Roadhouse marks the turnoff to Woomera, and six kilometres or so will see you at the township. It’s interesting: depending on your politics and perception it’s either a place that marks the way Australia has been exploited by, mainly, the Poms, or a sign that we can play with the big boys in space research. Either way, the town is worth a circuit with some photo stops for the many amazing showpieces. They have a decommissioned Canberra bomber, among much else.

“The thing about riding north on the Stuart Highway… is that this road is one of the rides that really shows you the essence of Australia.”

If Woomera seems a bit empty to you, you’re not wrong. It was built for a much larger population; the school, for instance, has room for 1000 children. Last time I looked, it had 55. Despite the apparent emptiness there are some things to see, including the Woomera Heritage Museum which is open from 7am to 3pm from March to November and from 8am – 2pm from December to February. These times may vary. It also covers the life of the amazing Outback road builder Len Beadell. The Aircraft and Missile Park holds aircraft and rockets, as the name suggests, and is fascinating for any adult techno head and for kids. 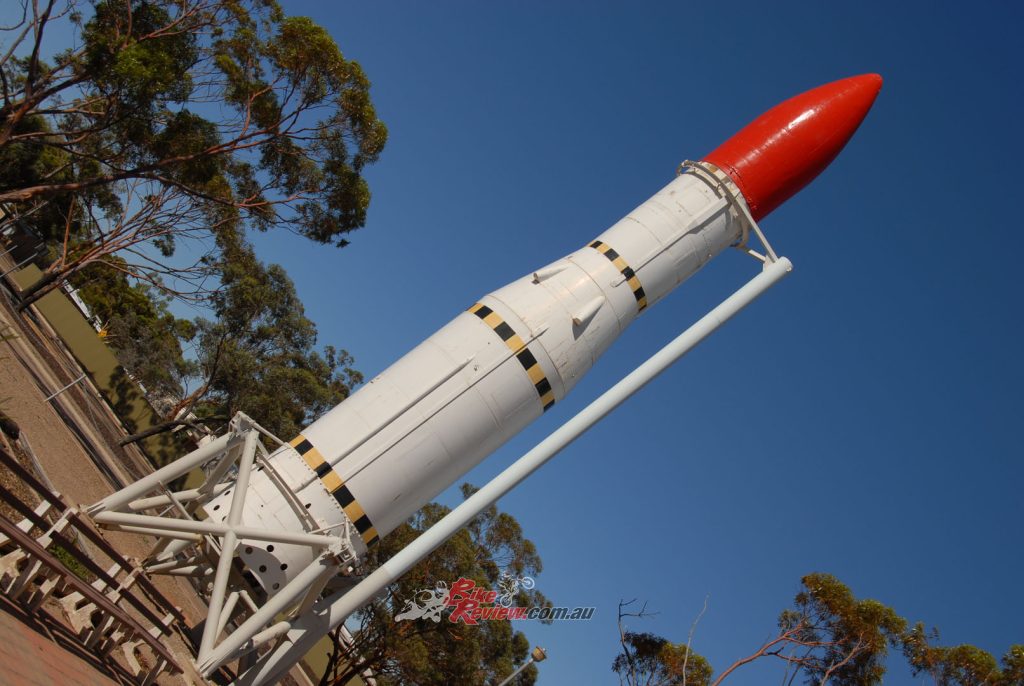 One of the missiles in the Aircraft and Missile Park. You can wander around this at any time of the day or day of the week. You’re looking at genuine history.

f it’s Friday make a point of checking out the enthusiast-run Baker Observatory in the evening. I was there on the wrong day of the week, but it gets good reports. Contact them ahead of time if you’d like to sample the telescope views at other times.

The way back is the way up as far as Port Augusta, but from there on you have several choices. Stay on the Princes Highway, if you like, but it’s more interesting to take Horrocks Pass to Wilmington and then the North Road through Clare back to Adelaide. South Australia has a fascinating history, and we’ll look at it again but for now all you probably want is to get back to civilisation and some greenery. You have the option of doing that by turning left in Kapunda and slipping through the Barossa Valley on your way to Adelaide. That’s what I do, with a stop in Birdwood. But more of that, another time.

Hard Information
Accommodation is limited to the Eldo Hotel,  which also has a bar and bistro, and the Woomera Traveller’s Village & Caravan Park which has a range of rooms and en-suites. Spuds Roadhouse Motel, back on the Stuart Highway has a variety of accommodation as well and gets good reports. The campground has clean toilets and hot showers which apparently only work sometimes. Payment is $5 with an honesty box system. 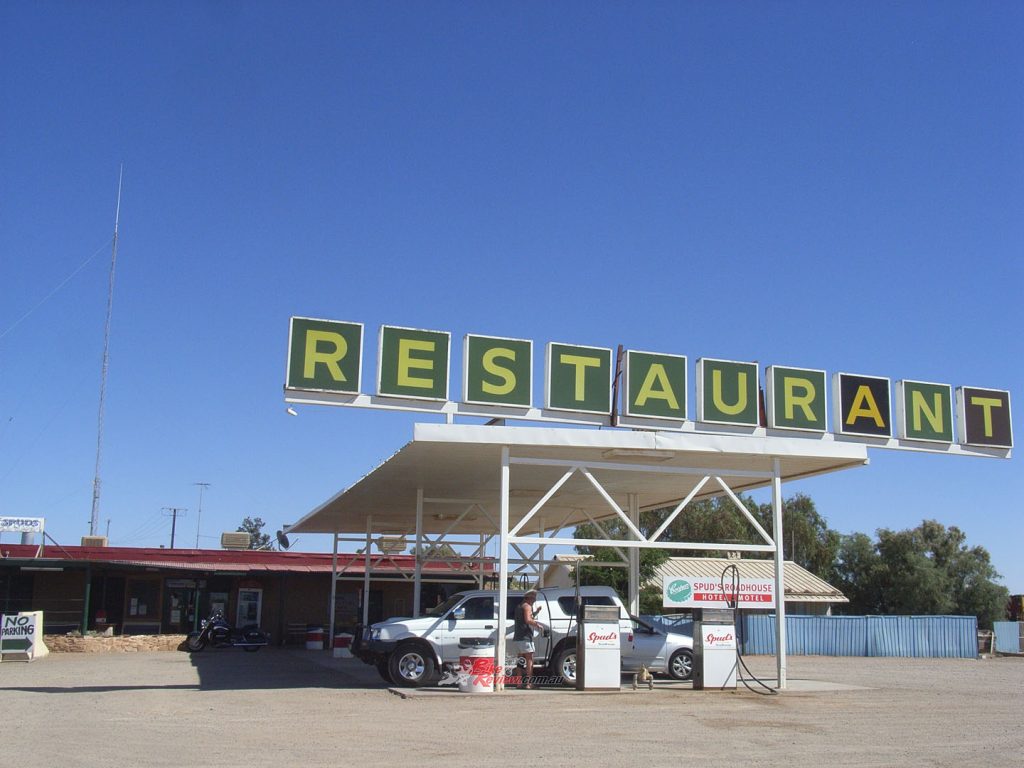 Spud’s service station, motel and campground. This marks your turnoff from, and return to, the Stuart Highway.

The ferry company website, spencergulfsearoad.com, has all the information you need to make plans for the ferry crossing. Booking is vital, so they say; I’m not sure if that applies to motorcycles. It costs $36 per person (discount $30) and $55 for bikes, $60 for trikes and $120 for bikes or trikes with trailers. No, don’t ask me how they work that out. A small café on board serves coffee and basic foodstuff.

The Triumph Rocket III Touring was ideal for this ride. It is not sports bike territory out there, you feel like cracking a (small) bottle of champagne when you find more than a couple of corners together, but there are lots of opportunities to wind a bike out. You appreciate the comfort of the big Trumpy too. 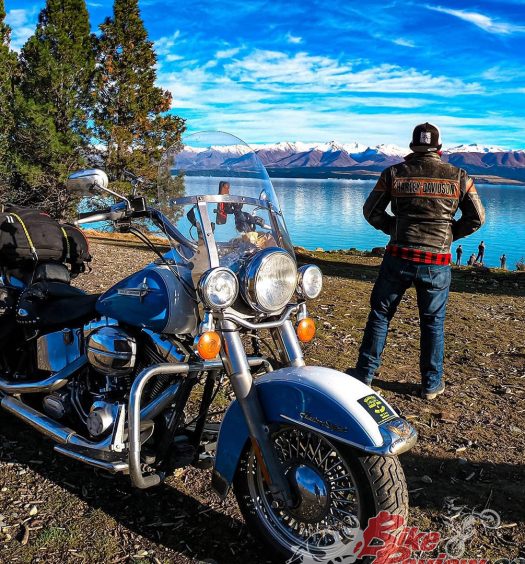 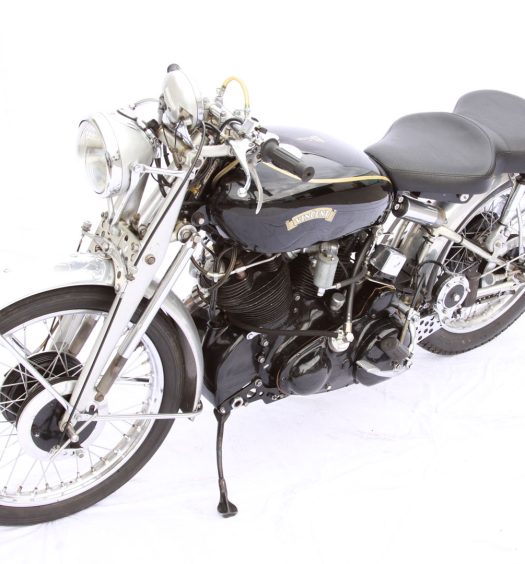