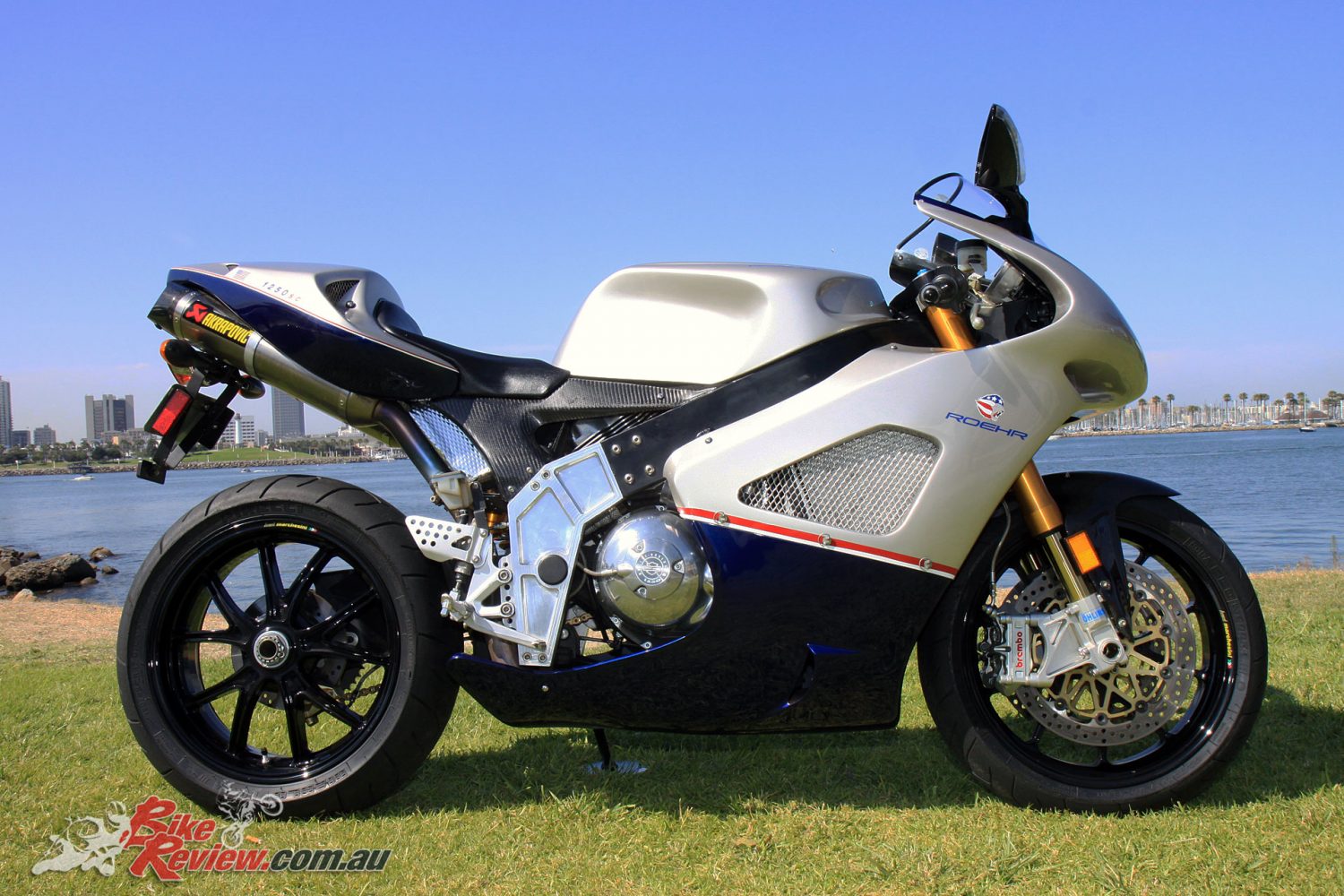 Before Eric Buell rejoined the scene with EBR, Walter Roehrich created the Roehr 1250sc, making claim to the title of the first American superbike, with this supercharged V-Rod powered custom creation... Words and Images by Doc Robinson

Arguably the doyen of American motorcycle journalists, Kevin Duke described the Roehr 1250sc as, “The most dazzling American motorcycle ever to wear a fairing” – which is a bit like describing Grumpy as the tallest of the seven dwarfs; there’s not much competition, well, apart from the now defunct Buell range. 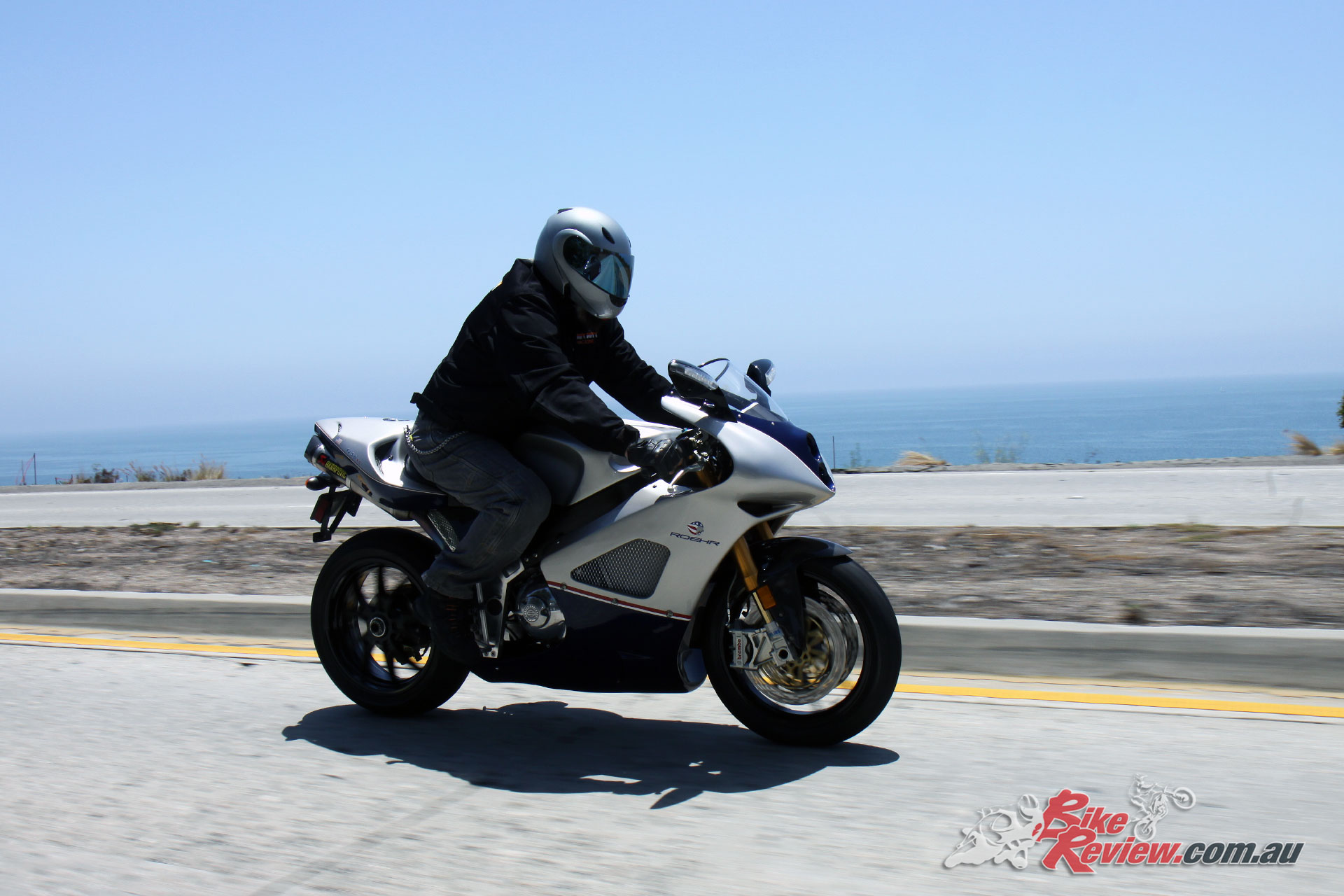 But before you laugh and dismiss it with a callous turn of the page I suggest you take a closer look at this Harley-Davidson V-Rod Revolution-powered machine, billed as the fastest and most powerful American production sportbike. Damn, those dwarves come back to mind … 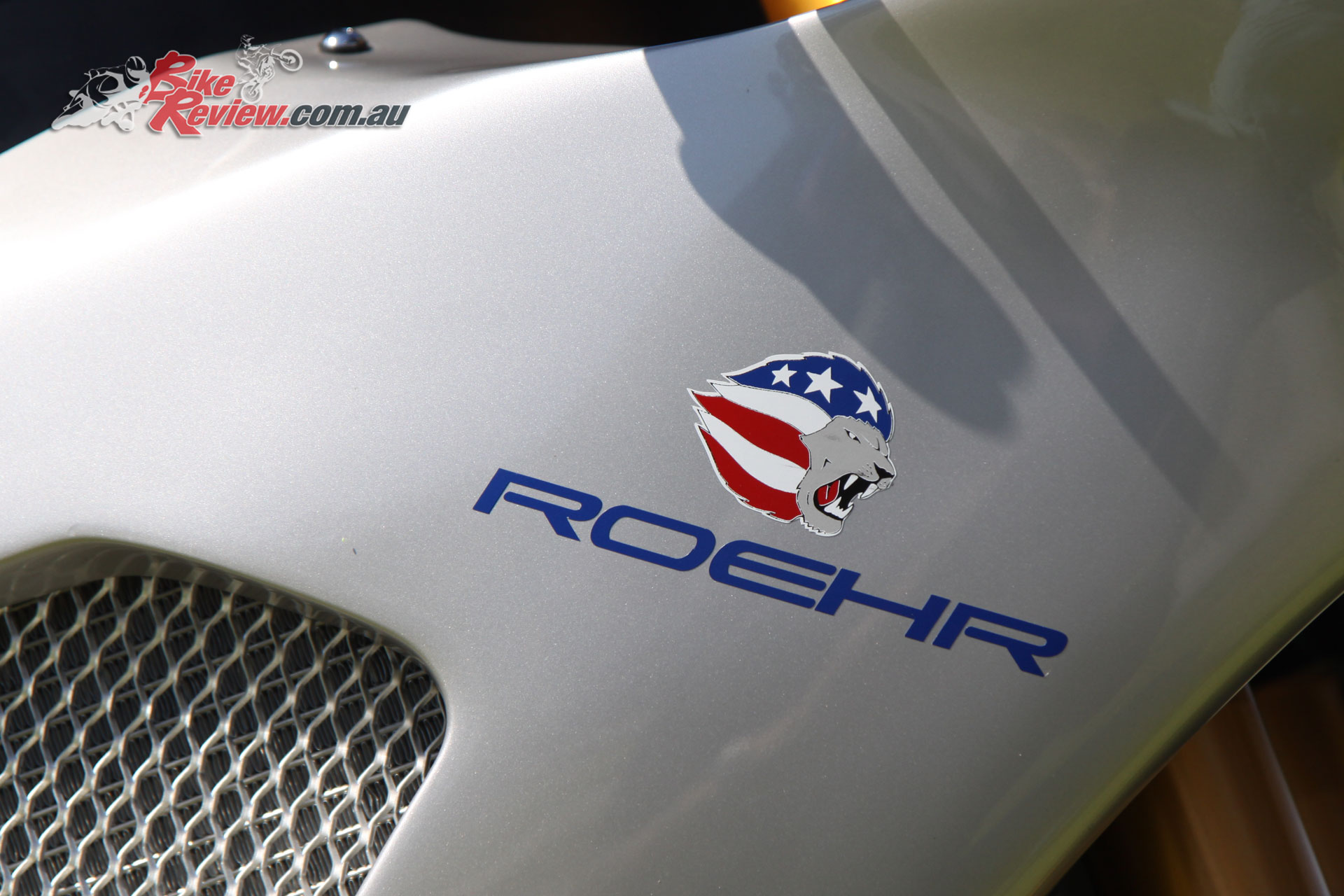 From the very first release of the V-Rod, pundits speculated not on if, but rather when, the V-Rod would power a sportbike. Not very well informed pundits mind you; the 1130cc Revolution motor wasn’t powerful enough, it was too heavy, and its centre of gravity is too high to fit the bill. Plus a sportbike was never in the sights of the Harley-Davidson Motor Company; after all, it had Buell to fill that niche.

So it was up to Walter Roehrich to step up to the plate and design and produce a V-Rod-powered sportbike with enough power not to be laughed off the road and handling and braking that would match the power output. Roehrich, an American engineer with a long time passion for sportbikes, has been designing and building sportbikes for over ten years. 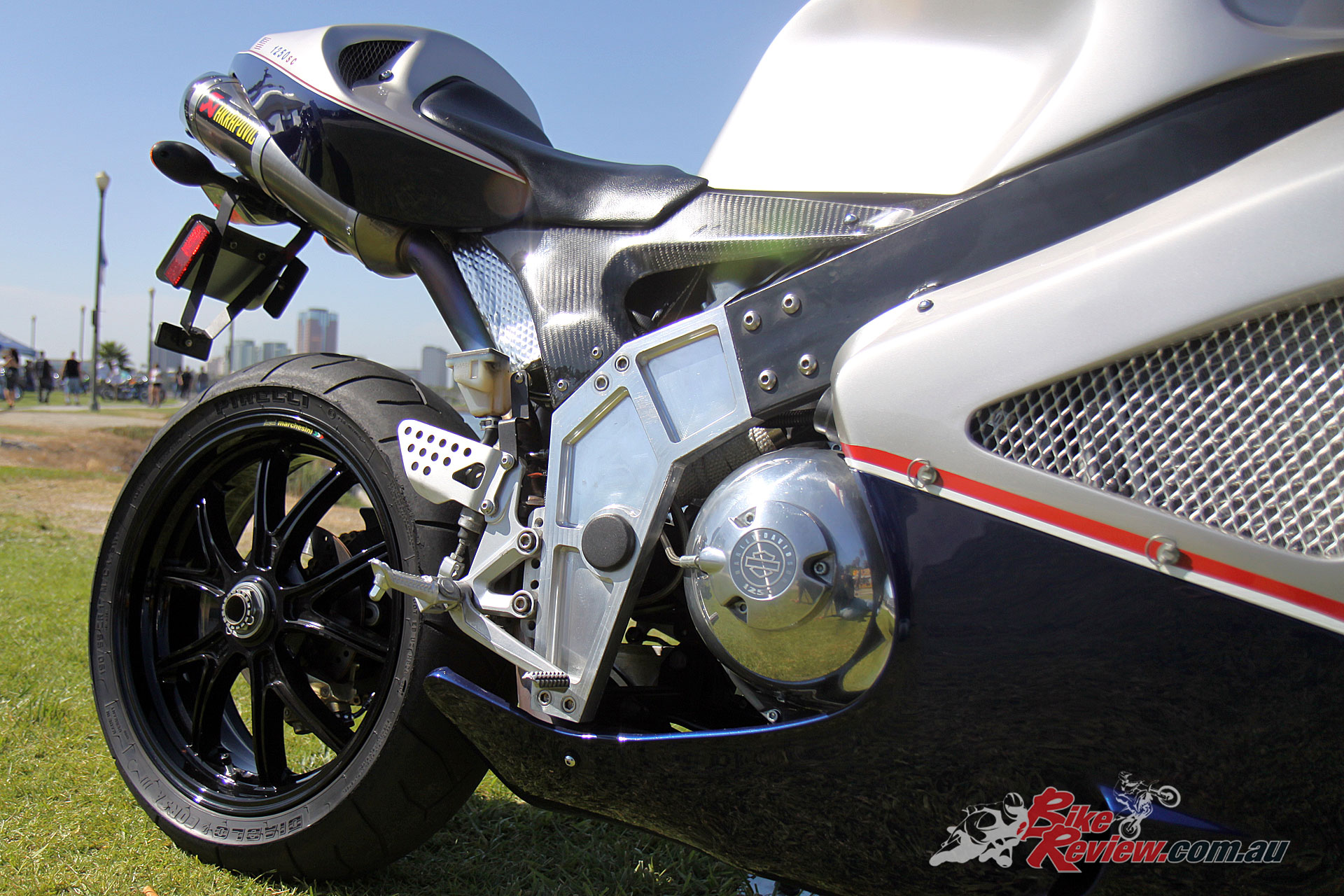 I won’t go into detail regarding his earlier efforts, which you can find summarised online, but suffice it to say they were both innovative and respectable.

Now the second-generation V-Rod engines have seen their capacity increased to 1250cc but while sprightly, are not within coo-ee of what is needed in a sportbike if it is not to be blown into the weeds. Walter solved the power problem by fitting a Rotrex C15-60 supercharger, which results in 180 horsepower at 9100rpm (167bhp at the rear wheel) and 155Nm of torque at 7600 revs. 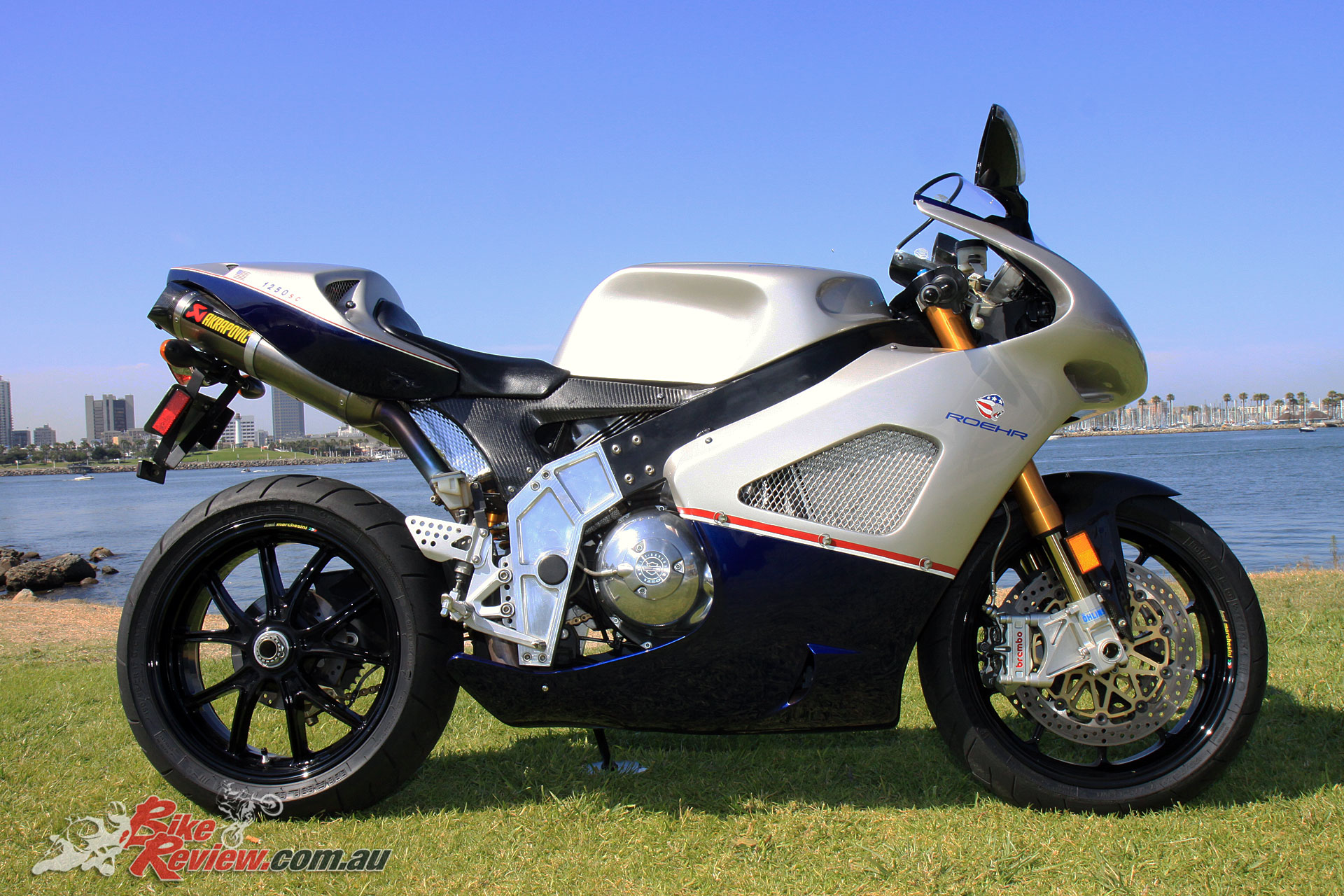 The Rotrex supercharger weighs just three-kilograms and basically operates like a belt-driven turbocharger, but pumps the intake system with pressurised air that rises proportionally to engine speed. A bypass valve recirculates unneeded air into the compressor during idle, cruise and deceleration, thus reducing parasitic drag and also allowing the engine to function in its normally aspirated form.

Now producing sufficient ponies is one thing, but a sportbike needs to be able to maximise this power output if it is going to succeed in the real world and the Roehr (pronounced “roar”) has achieved this very efficiently. 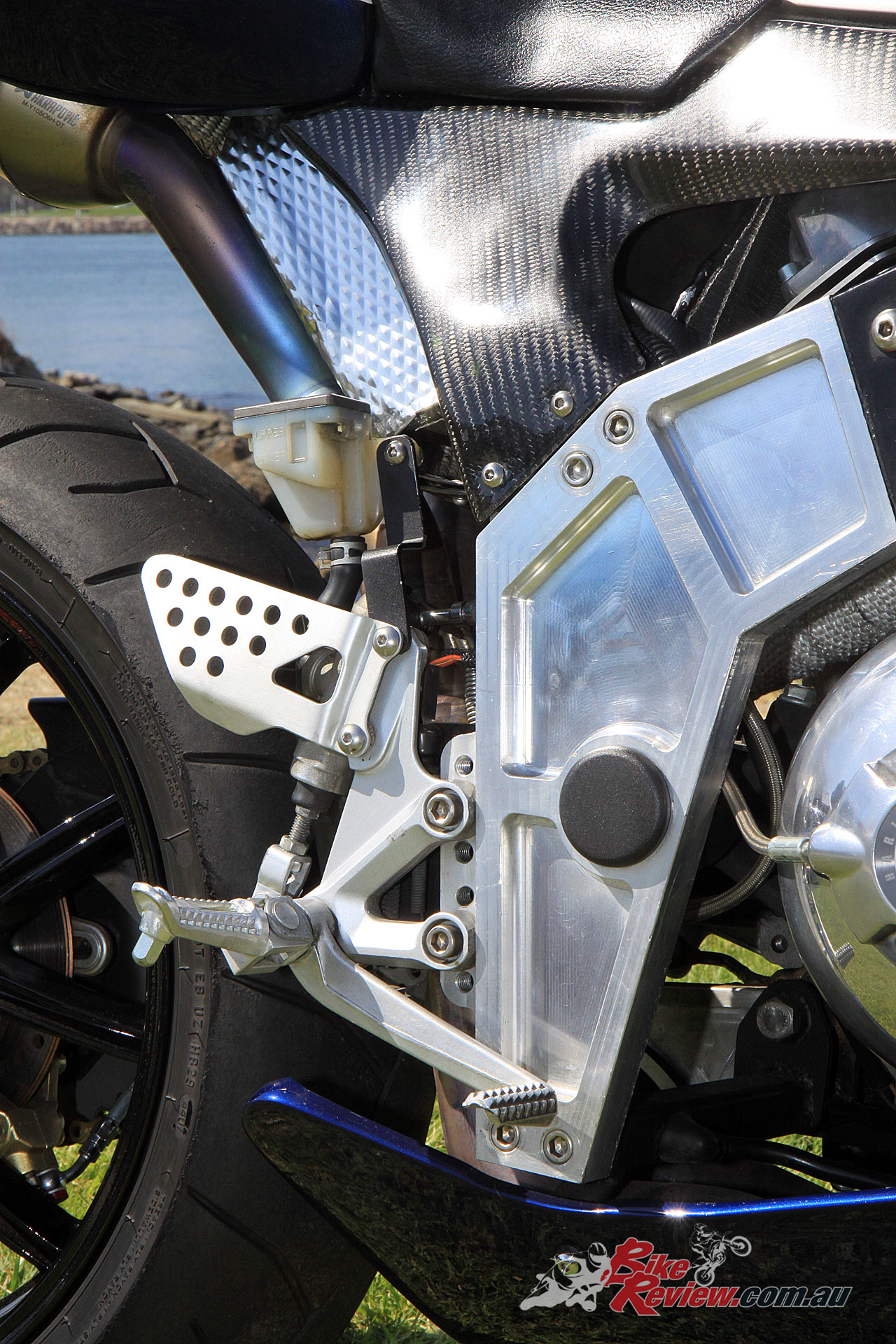 The frame was manufactured by Illinois-based chassis specialists Framecrafters

The frame is manufactured to Roehrich’s design by Illinois-based chassis specialists Framecrafters and uses a pair of CNC-machined 6061 billet-aluminium swingarm pivot plates epoxy-bonded and bolted to rectangular-section 4130 chrome-moly steel main frame spars. This design, he claims, combines the rigidity of an aluminium deltabox frame with the responsiveness of a tubular steel chassis.

The suspension is fully adjustable and up front features a set of Ohlins 43mm USD forks, while the rear uses a single Ohlins shock with progressive linkage. The Roehr runs Brembo radial-mount calipers and floating rotors along with Marchesini 17-inch wheels shod with Pirelli Diablo Corsa 3 tyres. 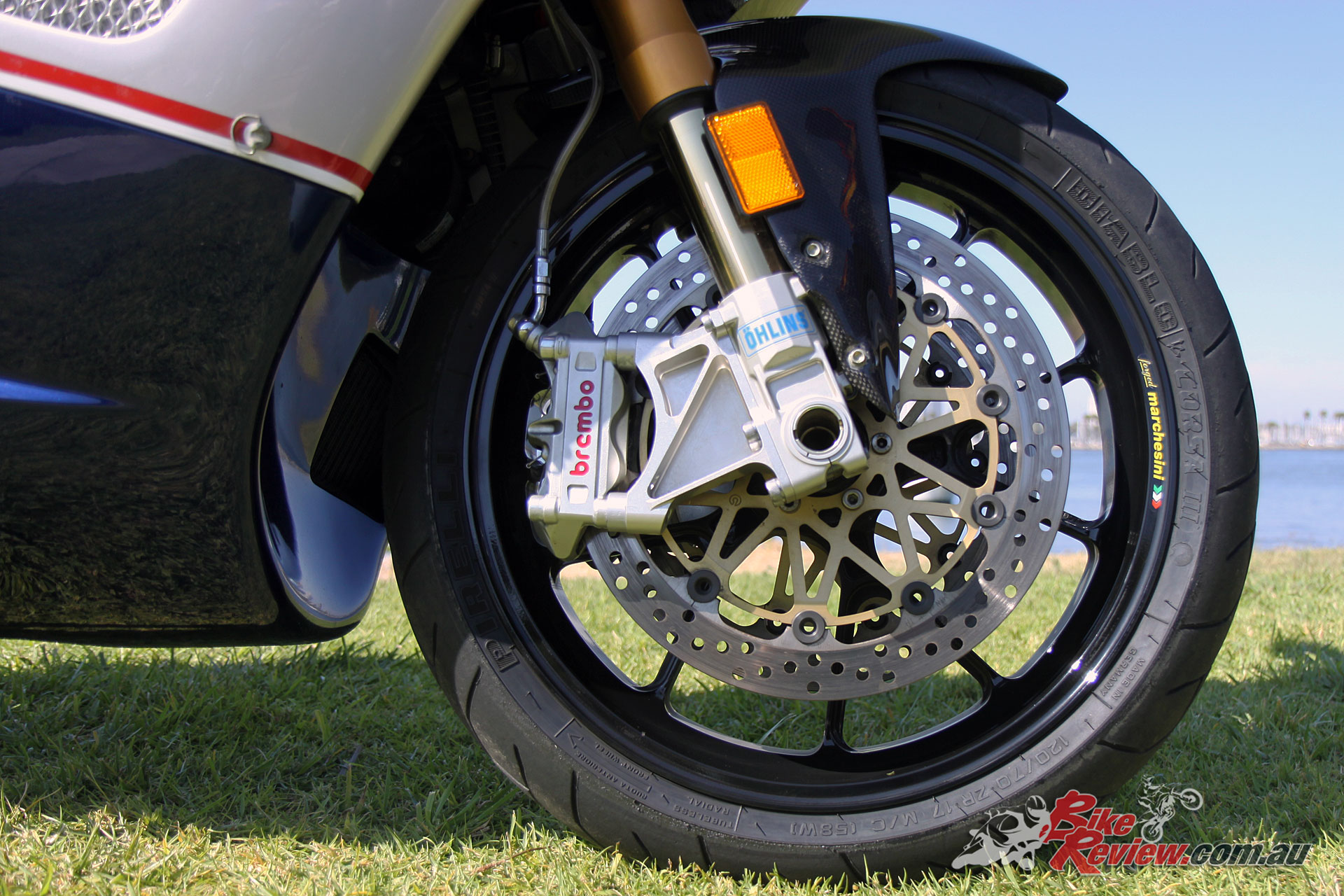 Ohlins suspension is featured front and rear, with Brembo brake calipers on the front

Dual under-seat Akrapovic mufflers are equipped with quietening inserts for street riding yet produce a deep rich note which adds to the riding enjoyment. Unlike many superchargers, the Rotrex’s design results in an unusually quiet operation perceived by the rider as more of a whistle than a whine. A wet, multi-plate, hydraulic actuation, slipper-type clutch mediates between the motor and the five-speed gearbox. 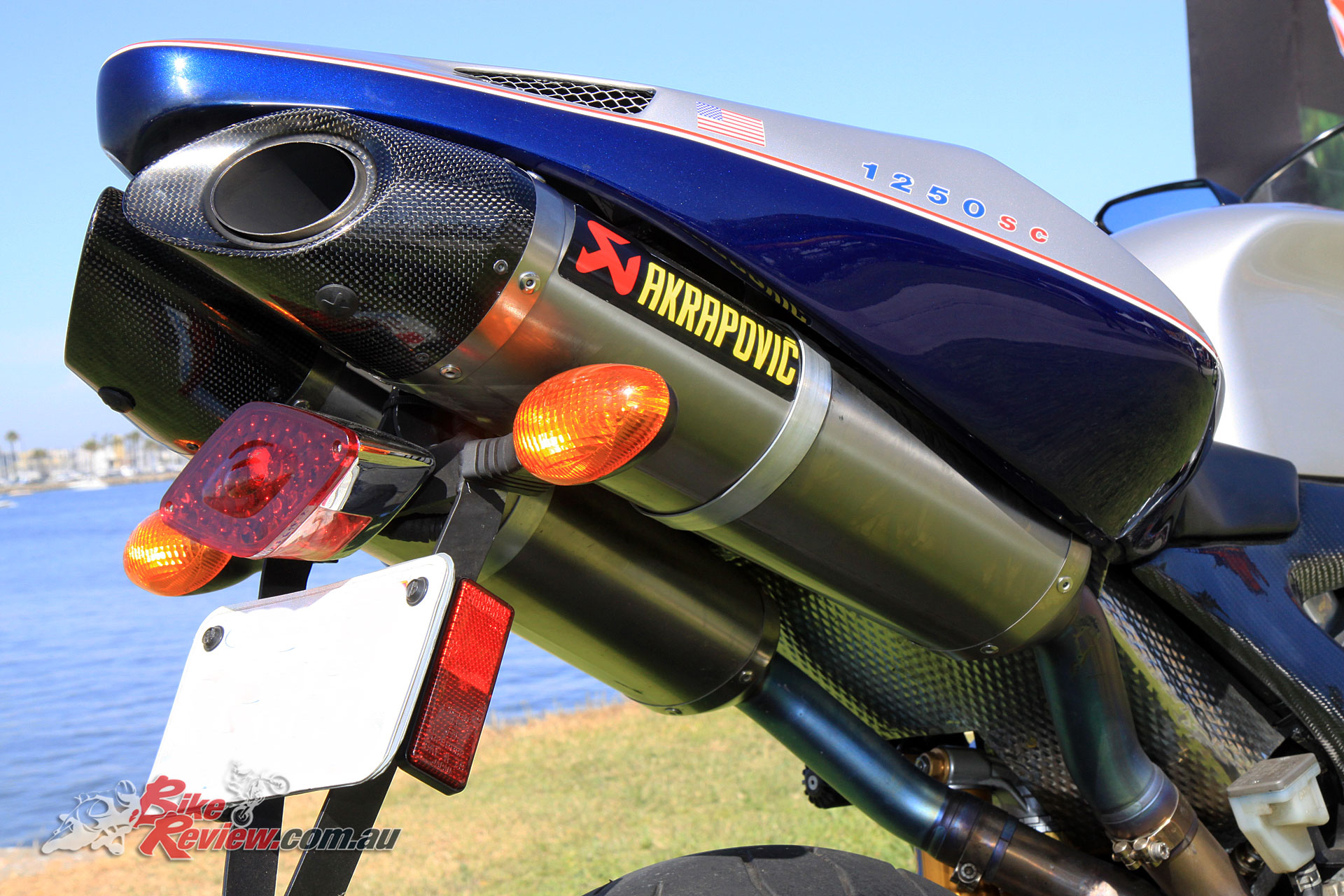 The bike has a dry weight of 196kg, a wheelbase of 1422mm, a seat height of 800mm, and a 23.5-degree neck rake with 89mm of trail. US journos who had the opportunity to experience the bike at some length on a race track were pretty enthusiastic about both its power and handling and summarised it as a totally fun and entertaining sportbike on the street but a touch heavy to be considered a pure track weapon. Which, I imagine, means that it achieves its marketing brief perfectly.

I first encountered the bike at the LA Calendar Motorcycle Show, a show that attracts an eclectic mix of sportbike and custom bike aficionados and noticed that it drew quite a large crowd for most of the two days of the show. Eavesdropping on the conversations of observers suggested a fairly positive response to the styling and general specs although the Harley-Davidson powerplant didn’t exactly light the fire of the sportbike guys and gals. 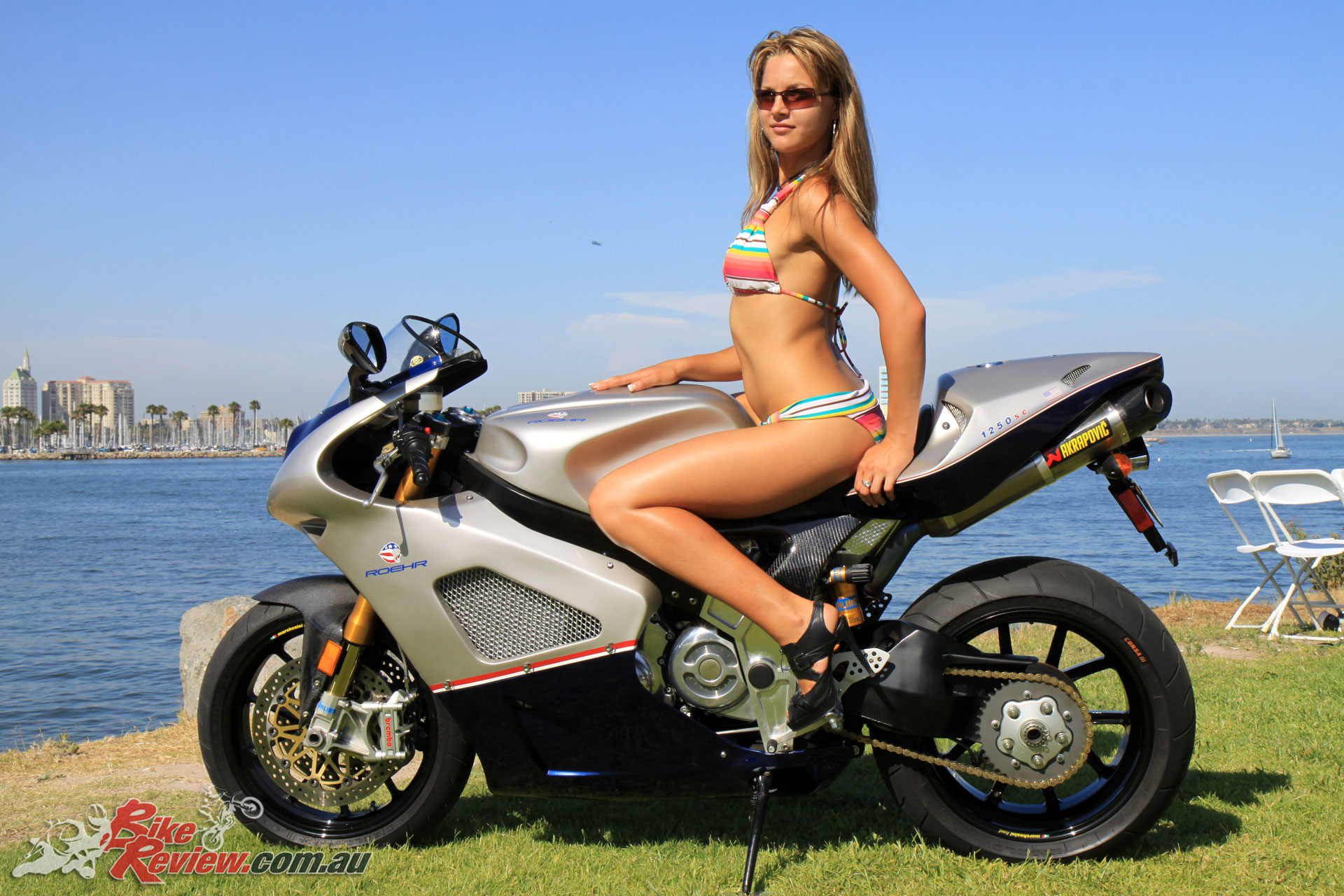 The Roehr 1250sc at the LA Calendar Motorcycle Show

After a long conversation with Walter Roehrich, I walked away impressed with his story and with a time arranged for a test ride. So it was that a couple of days later I met with Walter and his marketing director Gerald Joseph at Santa Monica. However, rather than a race track dedicated for the day to testing, due to time limitations (mine), my brief was to ride the bike along the Pacific Coast Highway, traffic be damned.

It is somewhat daunting to sit astride a one-off prototype that while maybe not priceless, would put a big dent in Walter’s plans along, no doubt, with his wallet. Especially when I was about to ride it in traffic that was driving on the wrong side of the road. At 175cm in height but with shortish legs I found the wide-ish seat made it a tippy-toe situation when stationary and the reach to the bars was a touch further forward than I would prefer, but generally the ergonomics were pretty good. 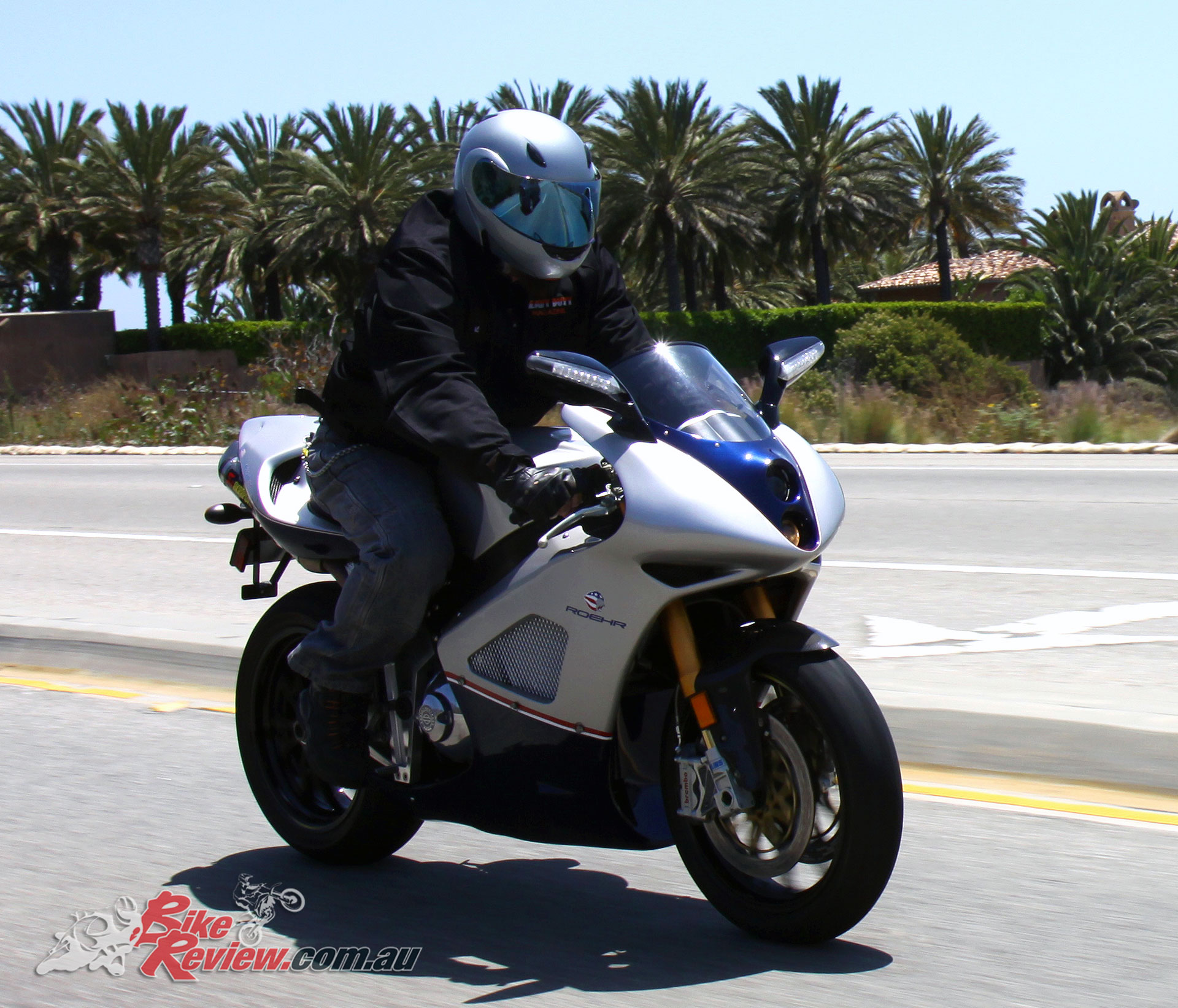 A wet weight of 196kg was competitive, with the 1250sc earning praise on the road, but being heavier to steer on the track, offering a strong overall package.

Once rolling the Roehr felt good indeed and a quick twist of the wrist saw the bike surge ahead smoothly and rapidly. Each time there was a gap in the traffic I took advantage of its seemingly endless torque to fly by a stack of cars effortlessly. If looking to critique the bike I would say that the steering felt slightly on the heavy side, but only a bit and one would soon get used to it.

The brakes worked brilliantly, as one would expect from the specs, delivering a progressive and readily modulated feel that engendered confidence. All in all, the Roehr is a helluva bike to have fun on, although your coffee will get cold as you explain all about it to the crowd of bystanders. 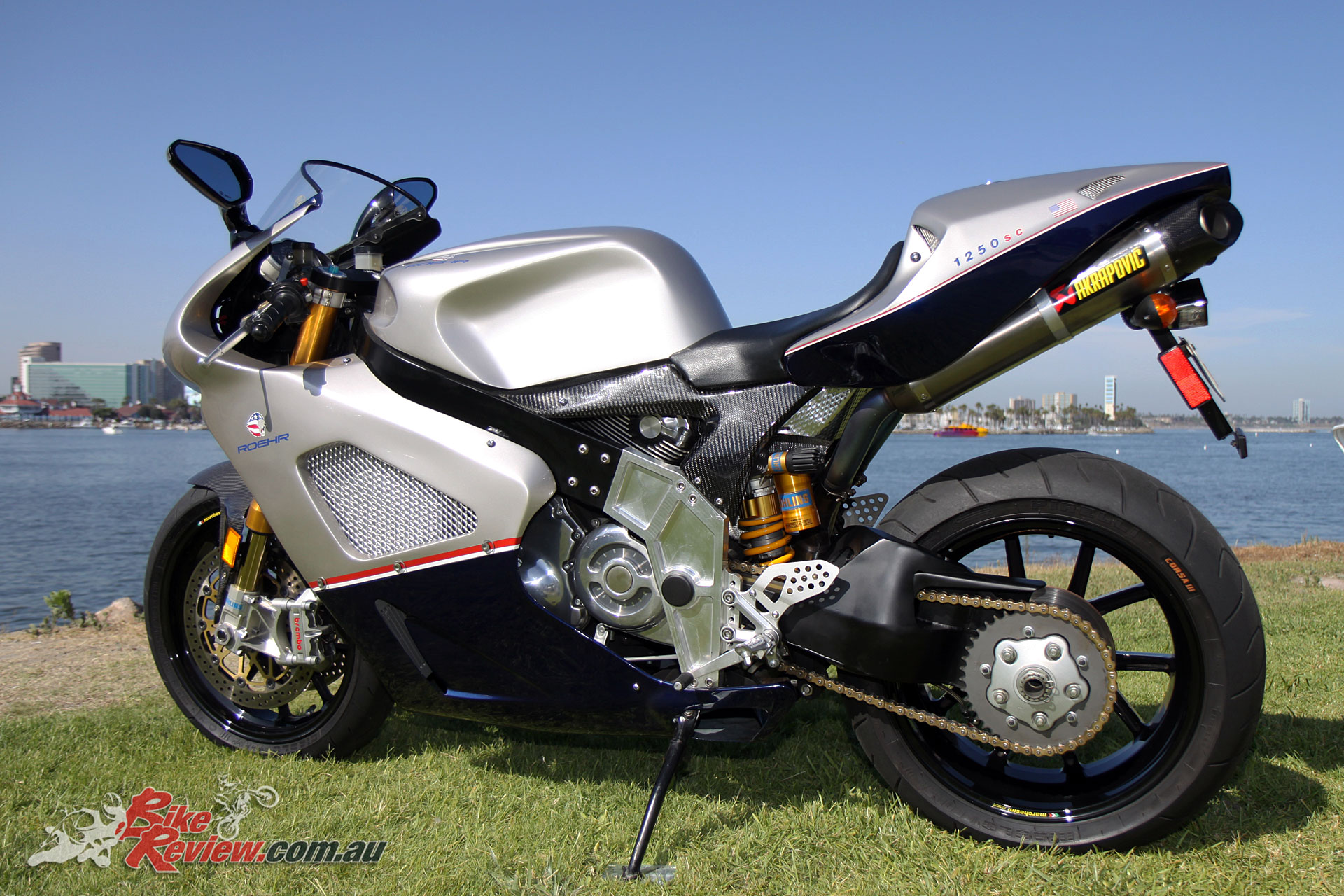 The Roehr 1250sc was even favourably comapred to Ducati’s 1198

Now although Ducati aficionados might not like the comparison, the Roehr’s handling has been favourably compared with a Ducati 1198 and as for the power delivery, let me quote the aforementioned Kevin Duke, “…Once the right grip is twisted open, you’d best be prepared for a never-ending blast of grunt that sweeps through its five-speed gearbox like nothing else on wheels.”

There is a slight lack of refined feel with this bike that is difficult to describe. A slightly raw feel; similar to how a Lotus feels when compared with a Ferrari for example. Which, given that this is a hand-built prototype, is perfectly reasonable. 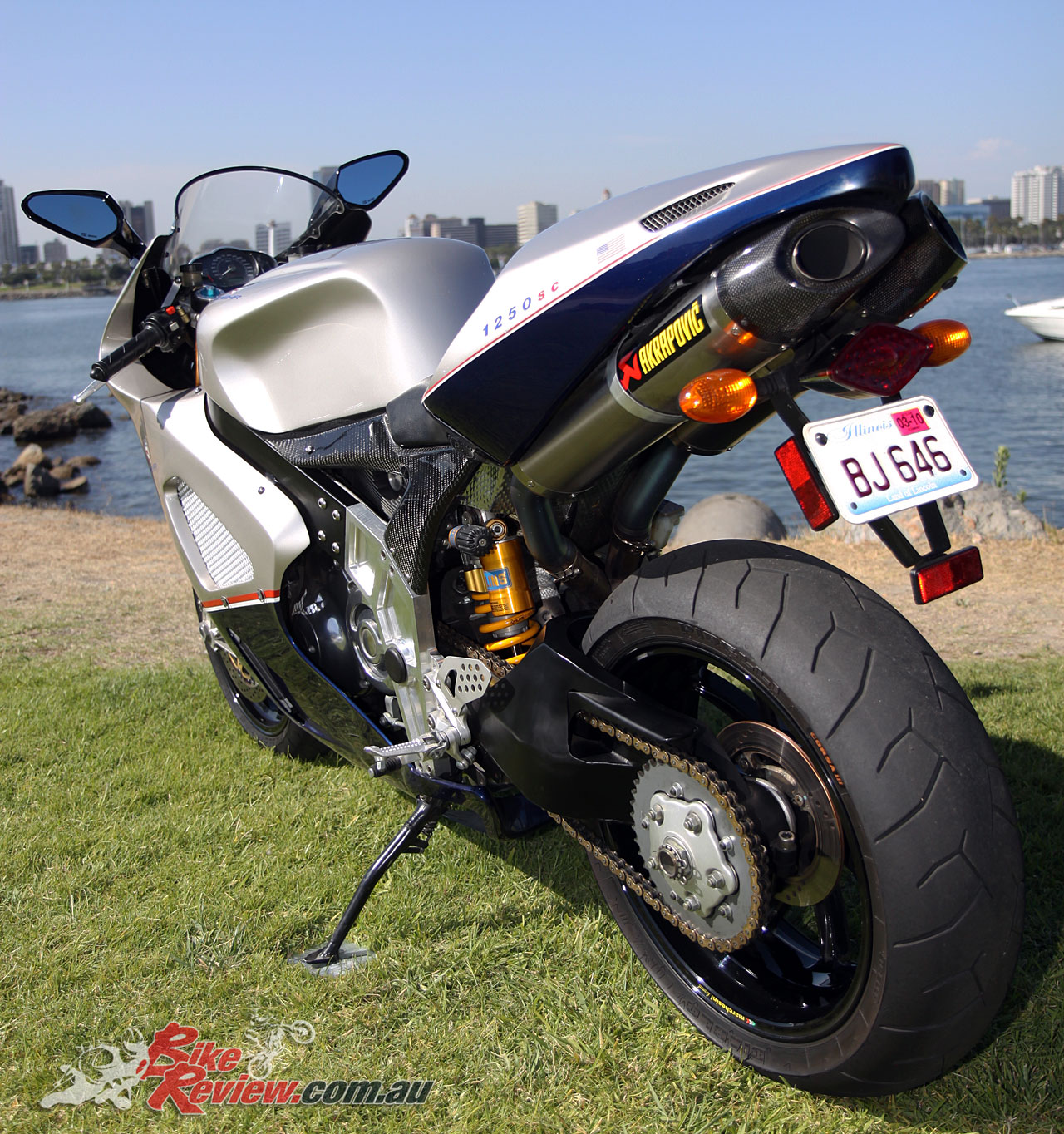 This is an exotic machine and it comes with a price tag to match, selling in the US for a touch under fifty big ones. But the more affluent rider, who wants to be different and to stand out from the pack won’t find this too big an ask. And with a scheduled production run of just fifty machines it sits firmly in the exclusive ownership ranks. 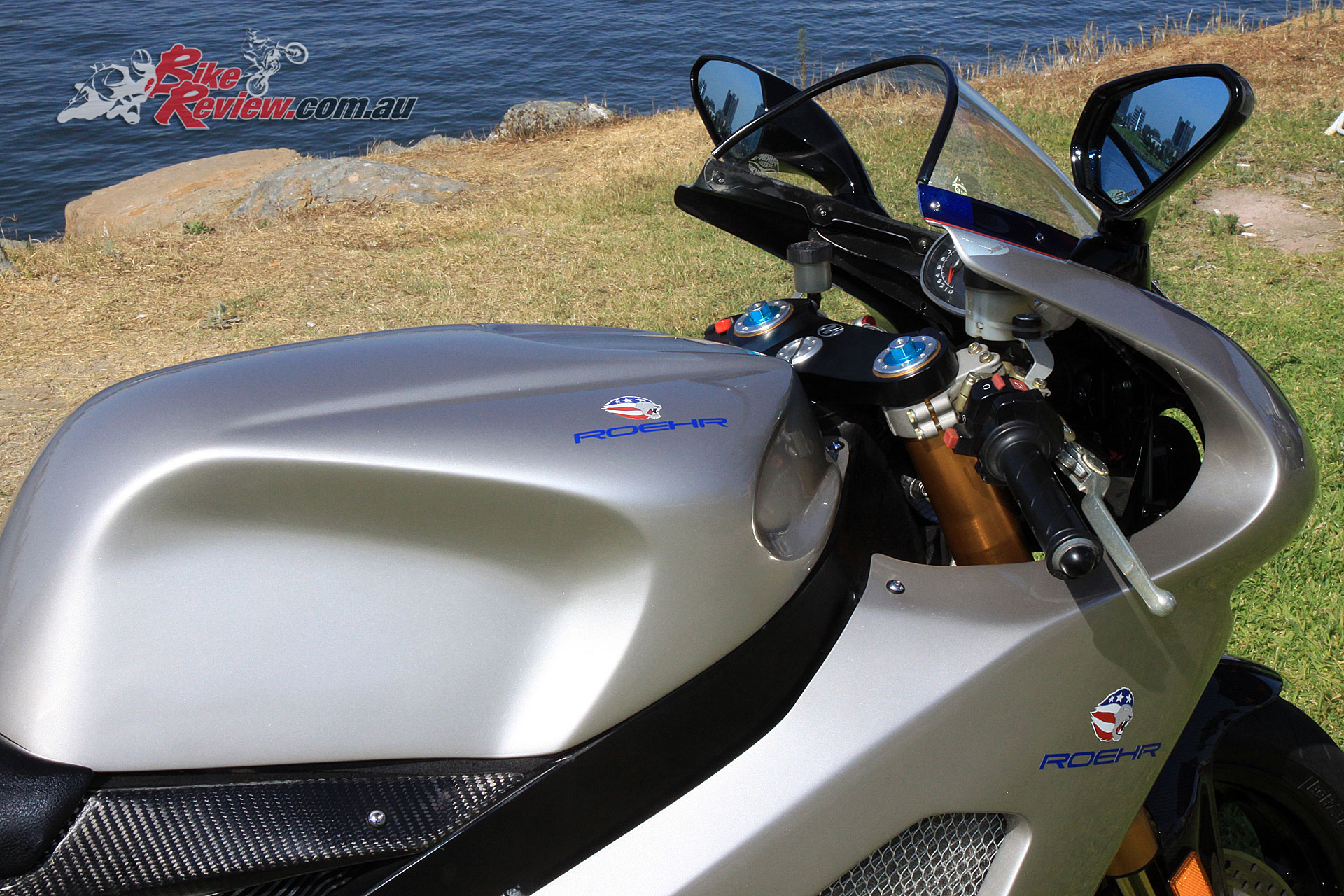 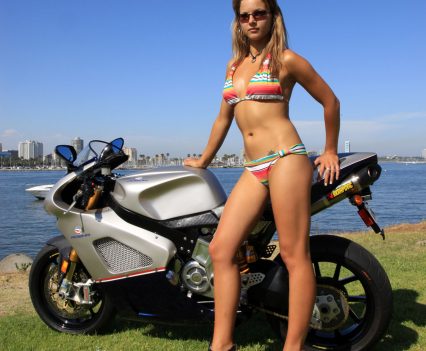 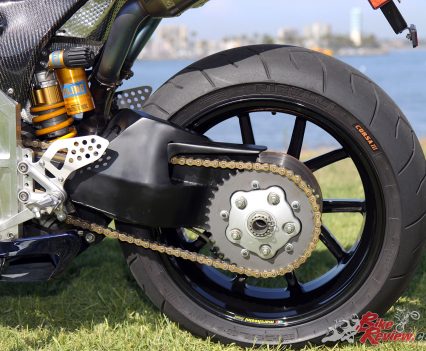 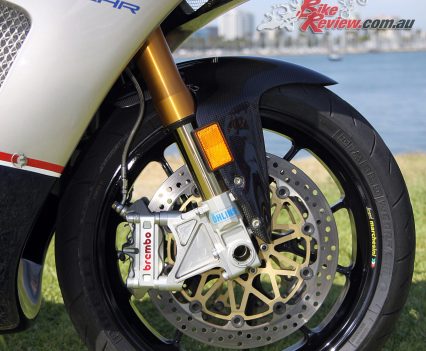 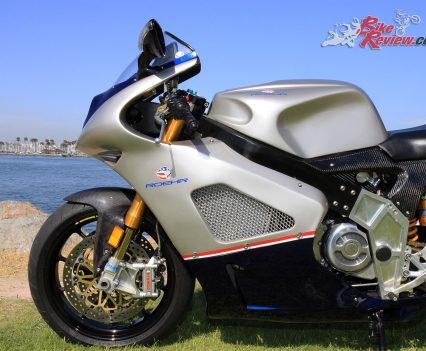 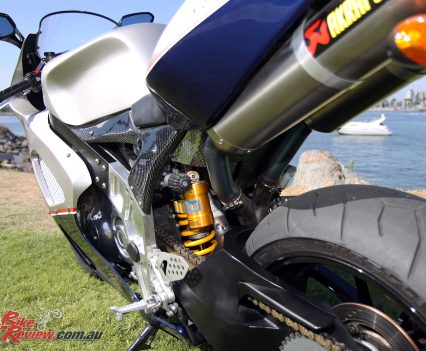 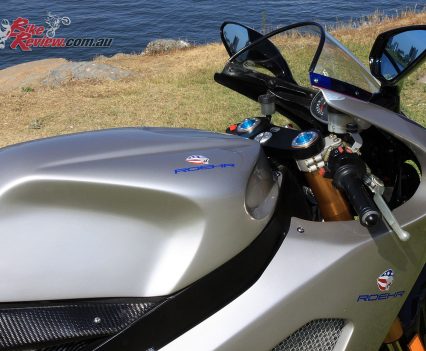 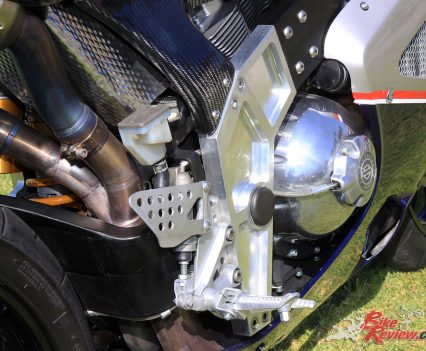 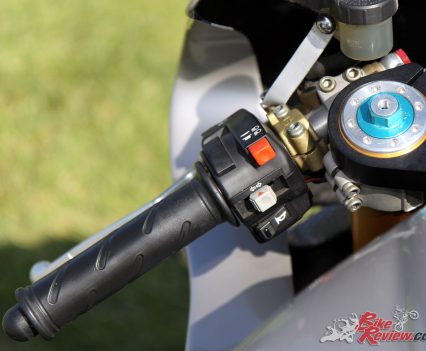 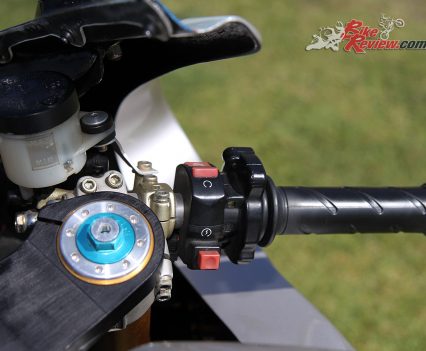 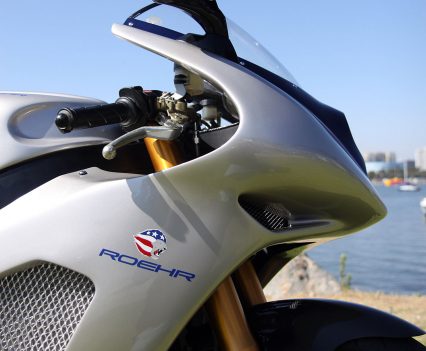 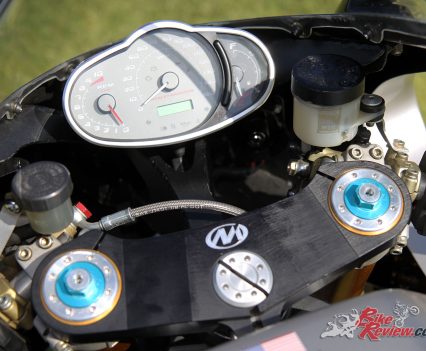 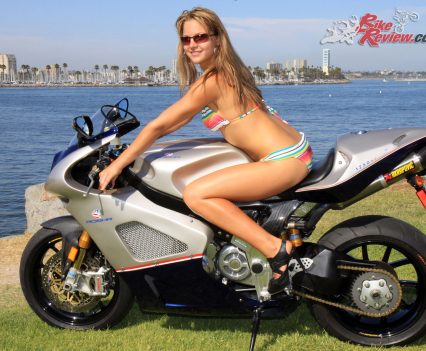 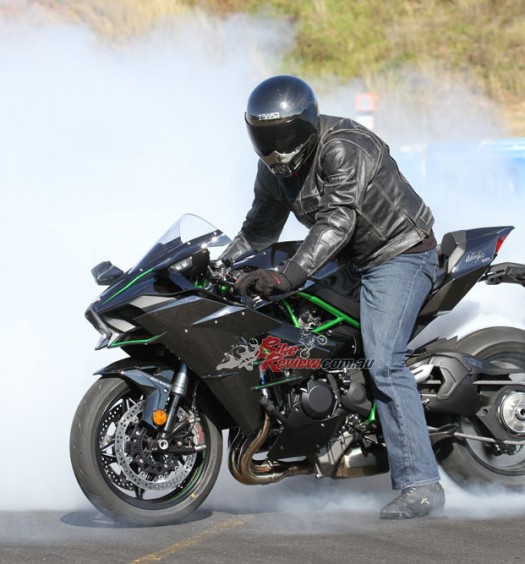 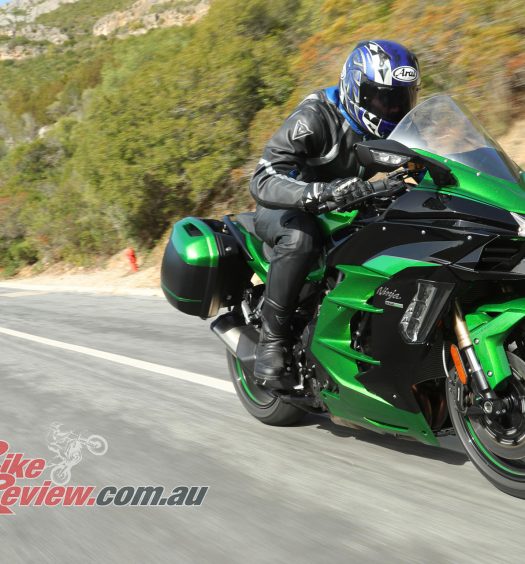