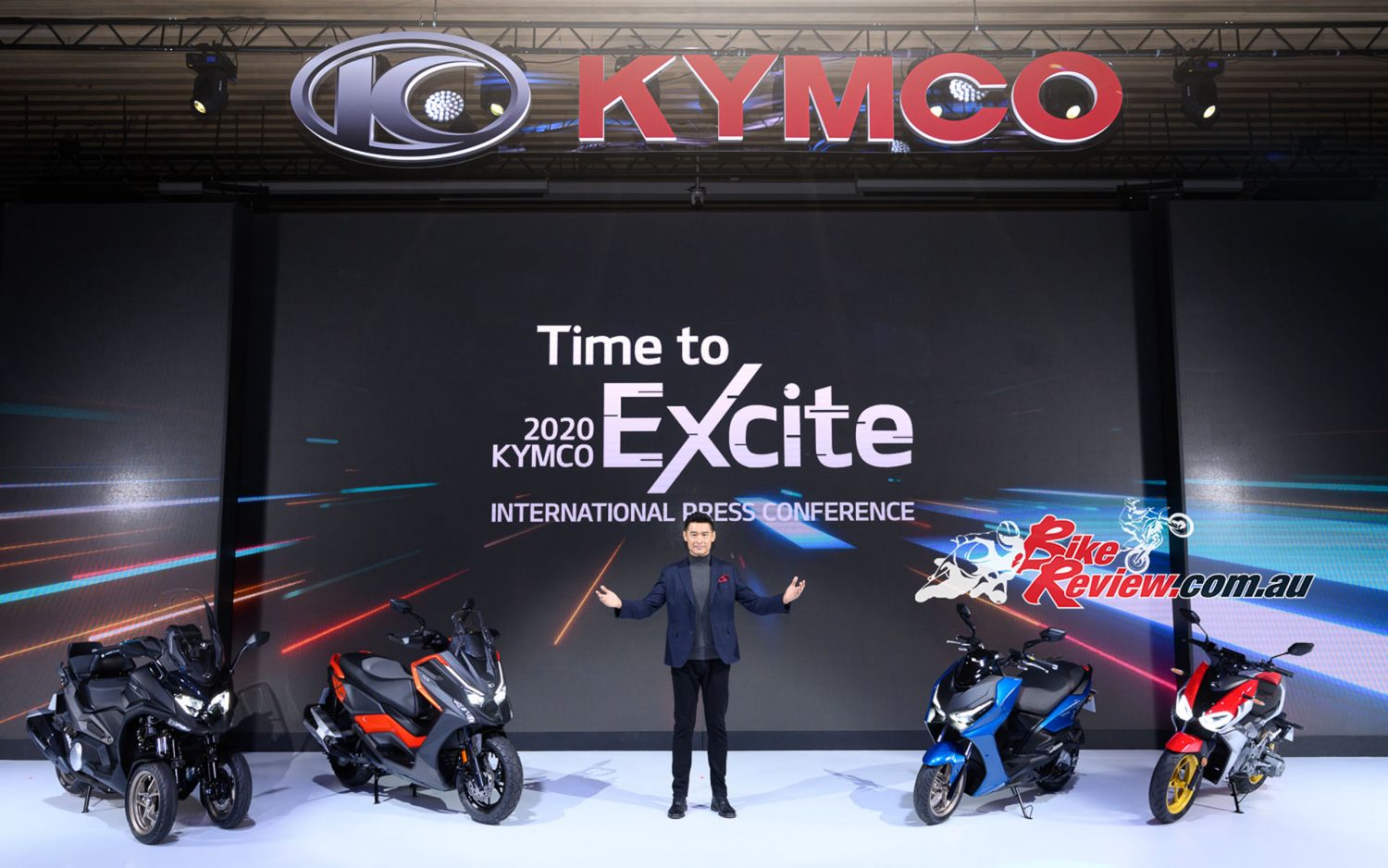 KYMCO have announced four new models all with a host of new technology including a three-wheeled scooter and much more, landing in Australian showrooms next year...

KYMCO has unveiled four all-new scooter models which they say is bound to re-energise riders, headlined by the F9 – the world’s first electric motorcycle equipped with a two-speed automatic transmission arriving in Australian showrooms later next year. 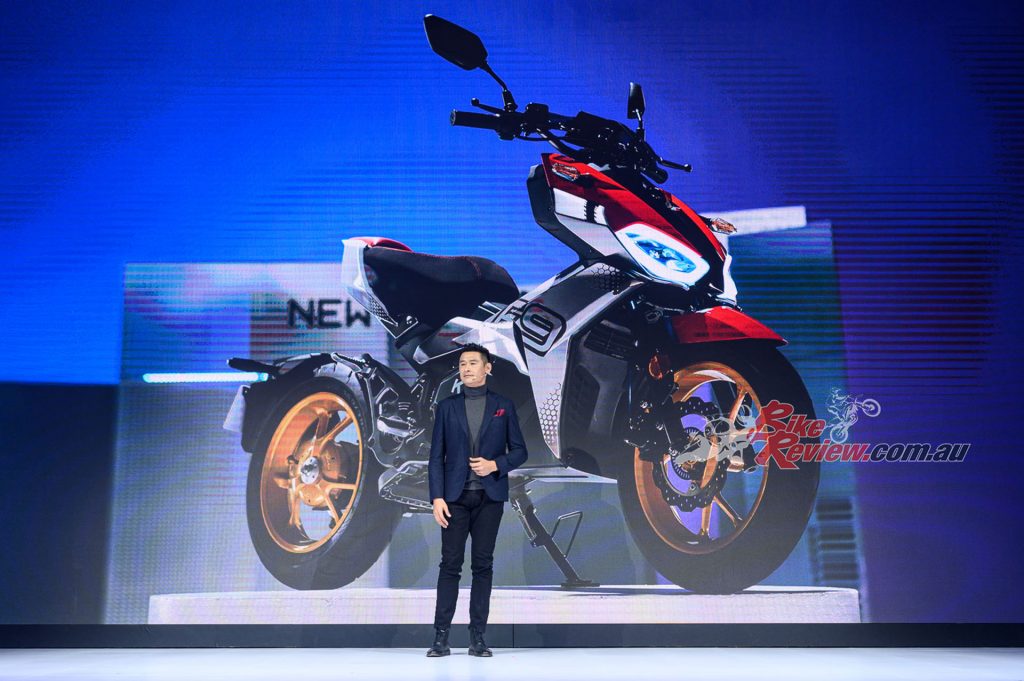 KYMCO F9
The KYMCO F9 is equipped with a 9.4kW motor and KYMCO say it is designed for enthusiastic street riding with 0 to 50km/h speed in a claimed three seconds and a top speed of 110km/h. A 96V 40Ah battery provides a claimed range of 120km under the New European Driving Cycle. With fast charging, it takes only two hours to fully charge the battery.

Furthermore, the F9 features the world’s first two-speed automatic transmission, which has been designed for electric motorcycles to improve power delivery and motor efficiency. It also employs a chassis design that integrates the battery as part of the frame structure for additional torsional rigidity. Combined with 14-inch wheels and a light weight of just 107kg, the F9 looks like it has been designed and engineered as more than just an average commuter. 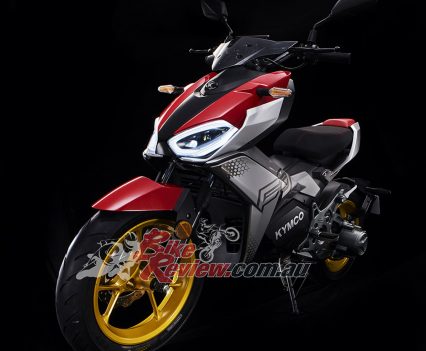 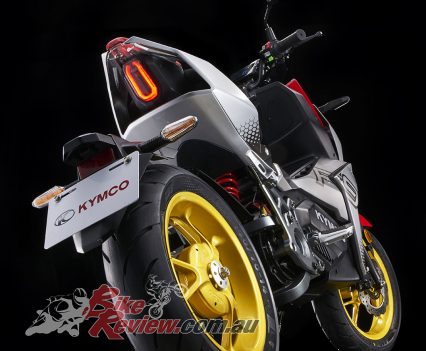 “Electric is one of the most significant transformations of modern transportation. From consumers, business to governments, more people are embracing electric vehicles to make our cities greener and the world a better place. However, while numerous electric motorcycles have been launched, few have been greeted with great enthusiasm by the market,” KYMCO Group chairman Allen Ko says. 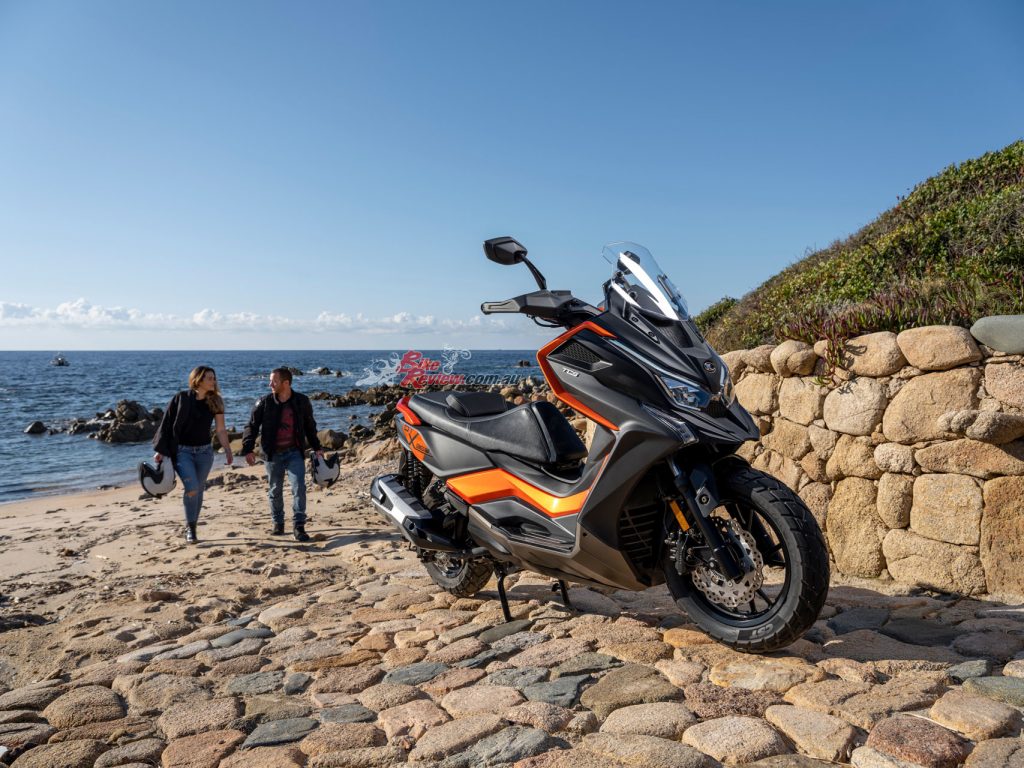 The DT X360 also features traction control, a keyless system for convenient access to the vehicle as well as a full-color LED dashboard. The DT X360 is powered by a 320cc liquid-cooled single-cylinder engine that produces 21.2kW@7250rpm and 30Nm@5750rpm. Other technical highlights include a 12.5-litre fuel capacity, a 194kg curb weight and 14/13-inch front/rear wheels.

“Many people believe scooters are only meant to be for city mobility. They also assume scooter riders just want to use their vehicles as part of their everyday urban routine. Underneath the surface lie urban riders’ unfulfilled quests to occasionally get out of their comfort zone and expand their horizons in all directions,” KYMCO Group chairman Allen Ko says. 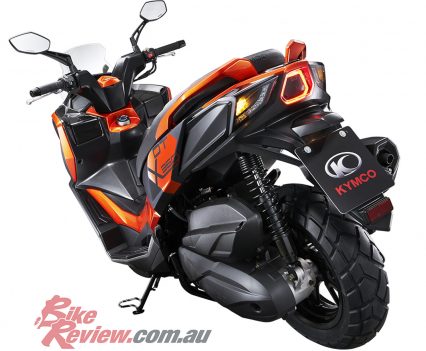 The DT X360 is powered by a 320cc liquid-cooled single-cylinder engine that produces 21.2kW 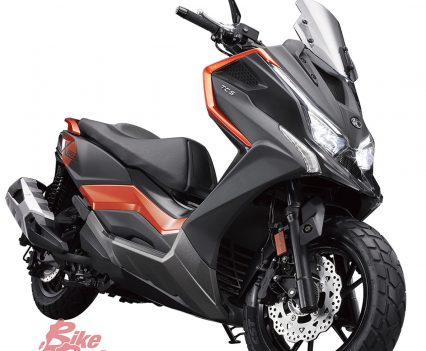 The DT X360 is powered by a 320cc liquid-cooled single-cylinder engine that produces 21.2kW

KYMCO KRV
The KYMCO KRV has been made to suit people looking for comfort, convenience with a touch of handling and performance aspects with an independent swingarm. The KRV also features some technology to suit the 21st century with ABS, traction control, LED lighting and a keyless system all offered as standard.

The independent swingarm feature on the KRV was been derived from KYMCO’s flagship AK 550 maxi-scooter. This KYMCO say this allows for a lower centre of gravity, optimum weight balance as well as a premium ride quality and maximum cornering capability. The KRV also has a flat-floor body design which has proved a comfortable lay out in other scooter models. 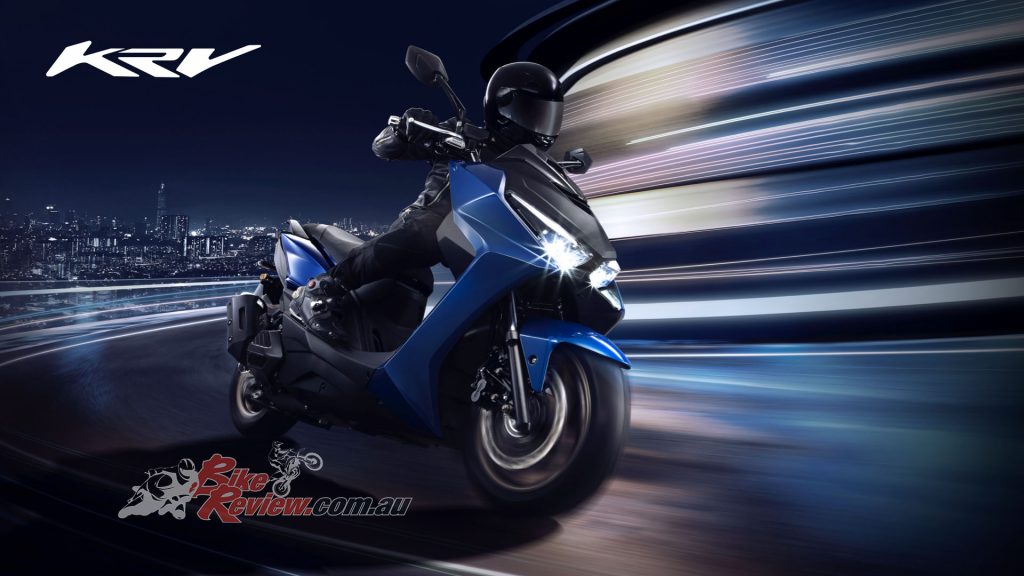 The new KRV has an independent swingarm

Powering the KYMCO KRV is a newly-developed 175cc four-valve liquid-cooled engine, which is delivered via belt drive to the rear wheel for a quiet and low-maintenance ownership experience. Combined with the ABS and traction control, it is looking to be a good competitor in the scooter market.

“The KYMCO F9, DT X360 and KRV all come with innovations that stir senses, intensify emotions and excite riders,” KYMCO Group chairman Allen Ko says. “As we continue to create personal vehicles that win the hearts of consumers all over the world, now, it’s time to excite!” 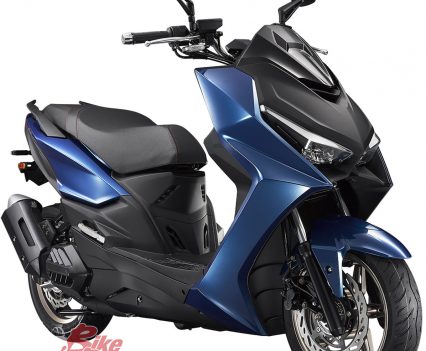 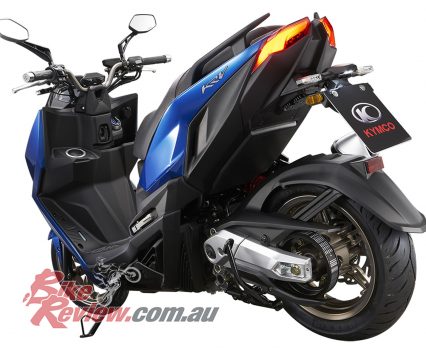 KYMCO CV3
Revealed at EICMA in 2017 in concept guise, now a production reality, the KYMCO CV3 is a leaning multi-wheel scooter which due to its stability, it can be ridden on a car licence in several European markets. The CV3 is powered by a 550cc parallel-twin liquid-cooled engine that generates 38kW@7500rpm and 53Nm@5750rpm.

The KYMCO CV3 also features ABS; traction control; cruise control, full LED lighting and dash; keyless ignition system, and a large-capacity underseat storage compartment. The three wheeler is looking to enter the same section of the market that mopeds like the Piaggio MP3 and Yamaha Tricity 300 sit in. 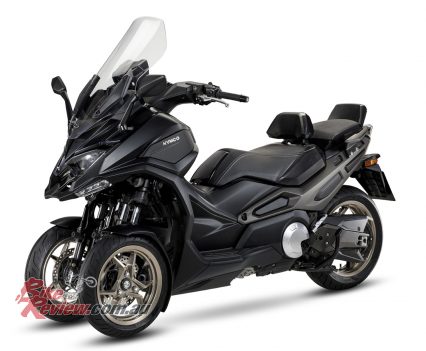 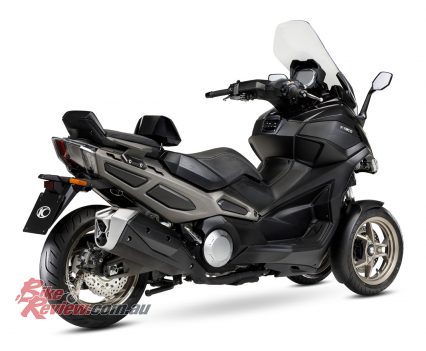 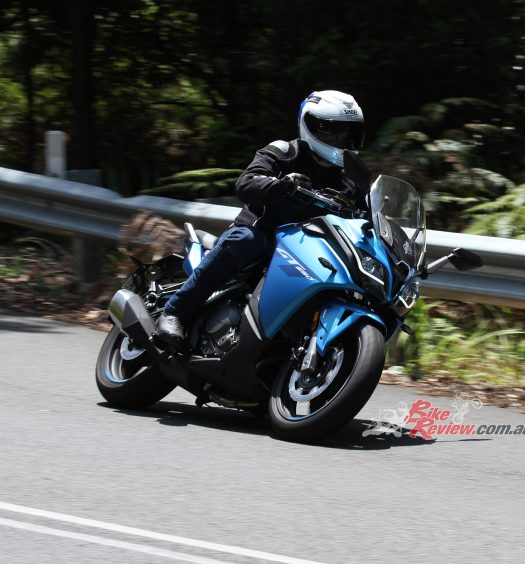 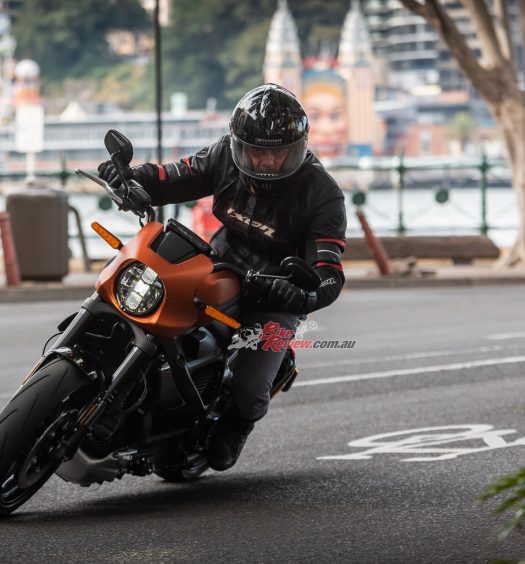