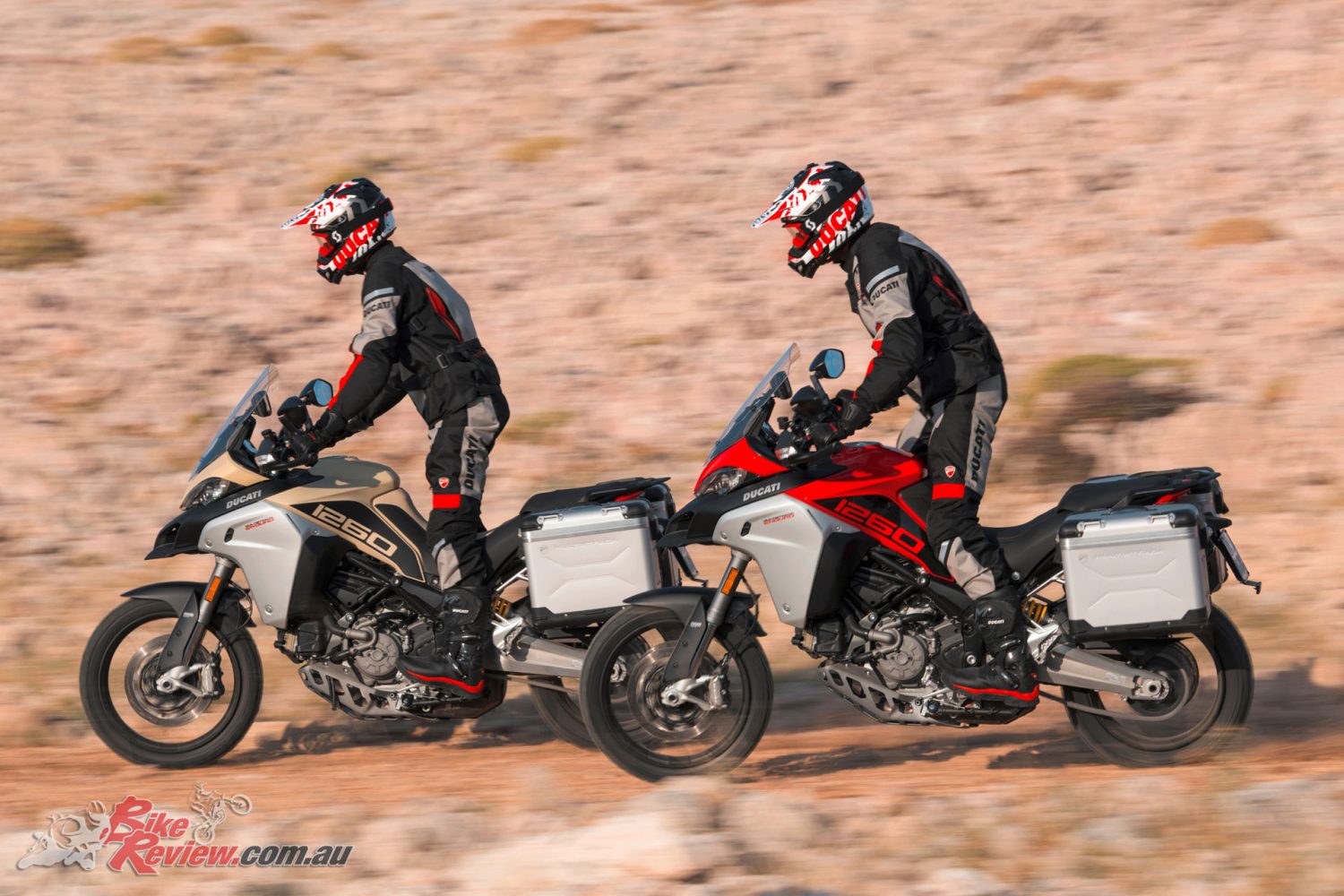 First breaking cover back in 2016, Ducati’s Multistrada Enduro model started life as a 1200, and will now see a capacity increase and name revision to match with the inclusion of the ‘1260’ 1262cc Testastretta DVT powerplant in 2019, alongside a host of other updates.

Official Australian availability and pricing are yet to be announced, however the new Multistrada 1260 Enduro is looking to be a significant upgrade over the outgoing version. 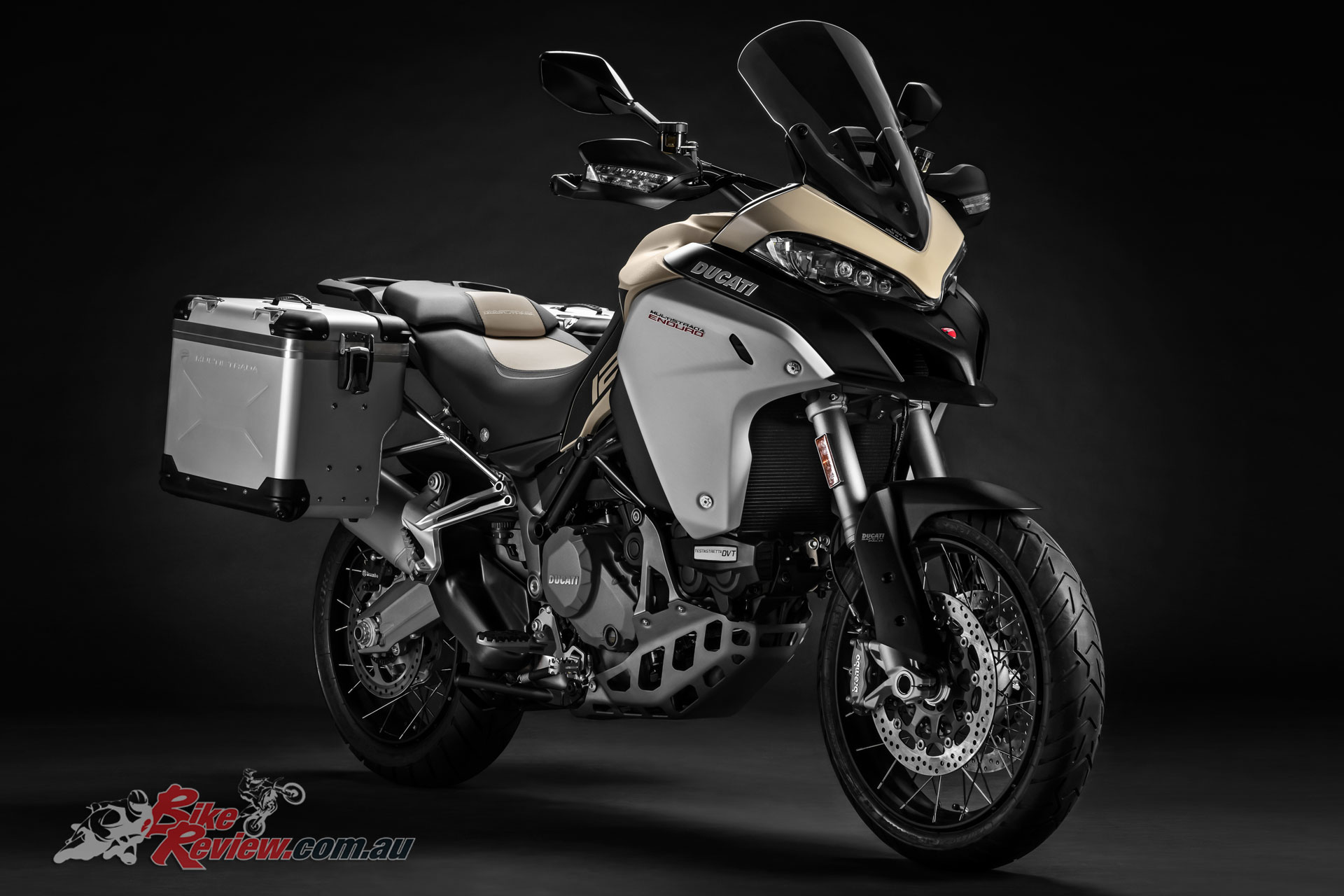 The primary change is the Enduro mounting the 158hp 1262cc Testastretta DVT with variable cam timing which made its debut in 2017 on the Multistrada 1260. Compared to the previous version it has an extra 64cc of displacement and a series of optimisations aimed smooth pulling power right from the bottom of the rev range, making the bike more fun to ride.

While the new Testastretta engine provides impressive performance for the class, power is kept under rider control with a variety of options, thanks to the Riding Modes and a new Ride by Wire function which ensures smoother throttle control. The DQS (Ducati Quick Shift) Up & Down also aims to significantly improves the ride experience with precise clutchless upshifts and downshifts.

Spoked wheels, 19in at the front and 17in at the rear, ensure the Multistrada 1260 Enduro is ideally suited for long adventure rides and the roughest of conditions. Featuring recalibrated electronic semi-active Sachs suspension (with 185 mm of travel both front and rear) and a 30-litre fuel tank, the Enduro is, with a range of 450 km and beyond, an unstoppable globetrotter on any terrain. 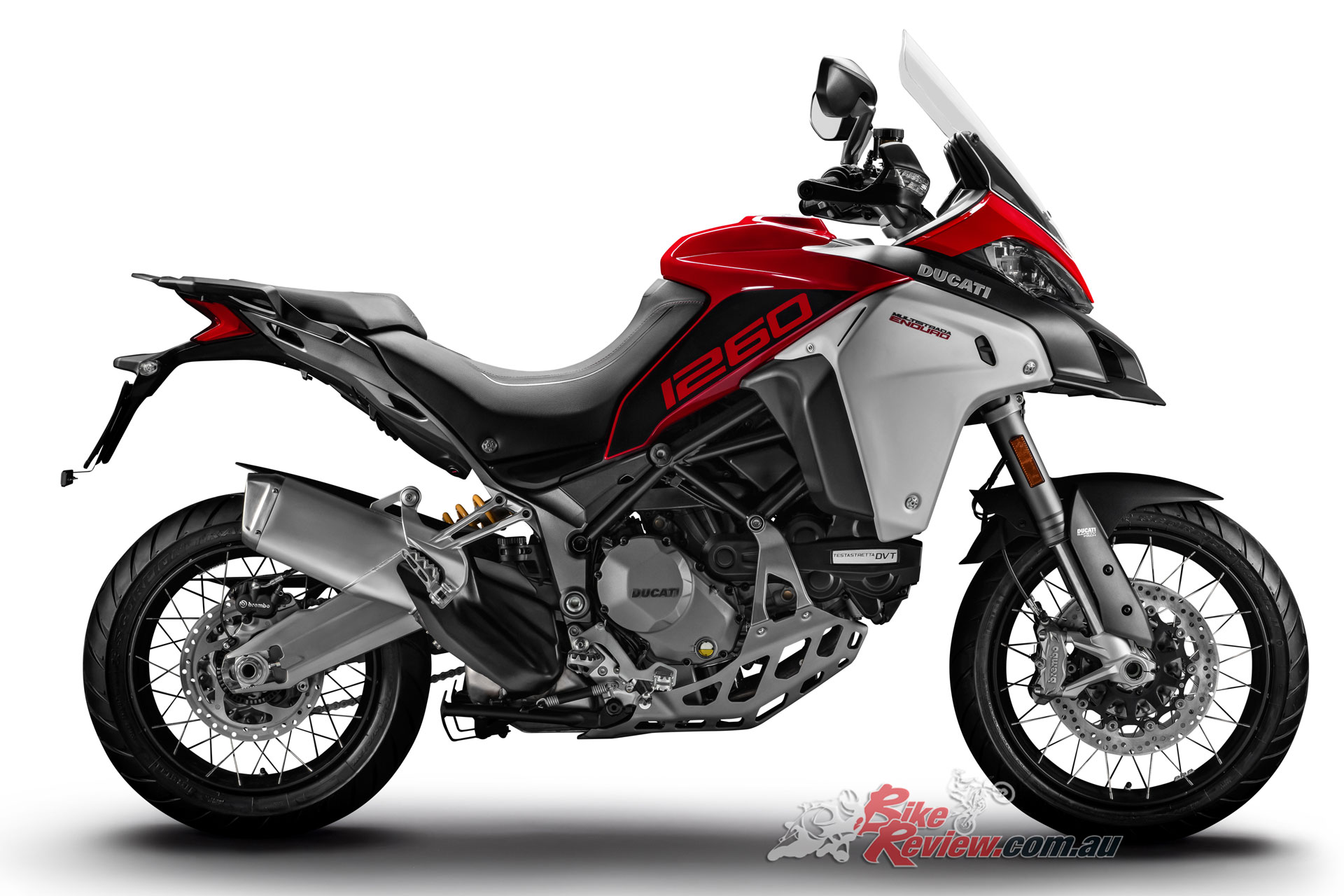 A revised ergonomics (seat, handlebar and centre of gravity are all lower than on the 1200 version) and a new suspension setup ensure more comfort and fun to any rider in any condition.

A new ‘Human Machine Interface’ (HMI) via a 5in TFT colour display and switchgear controls gives user-friendly control of all bike settings and functions, with the Ducati Multimedia System (DMS) included.

The DMS connects the bike to the rider’s smartphone via Bluetooth, giving access to all key multimedia functions (incoming calls, text messaging, music). Other standard Multistrada 1260 Enduro features include cruise control and a hands-free system.

The Multistrada 1260 Enduro is also compatible with the new Ducati Link App, which lets riders set the journey mode (a combination of Load and Riding Mode) and personalise the parameters of each Riding Mode (ABS, Ducati Traction Control, etc.) via their smartphones. 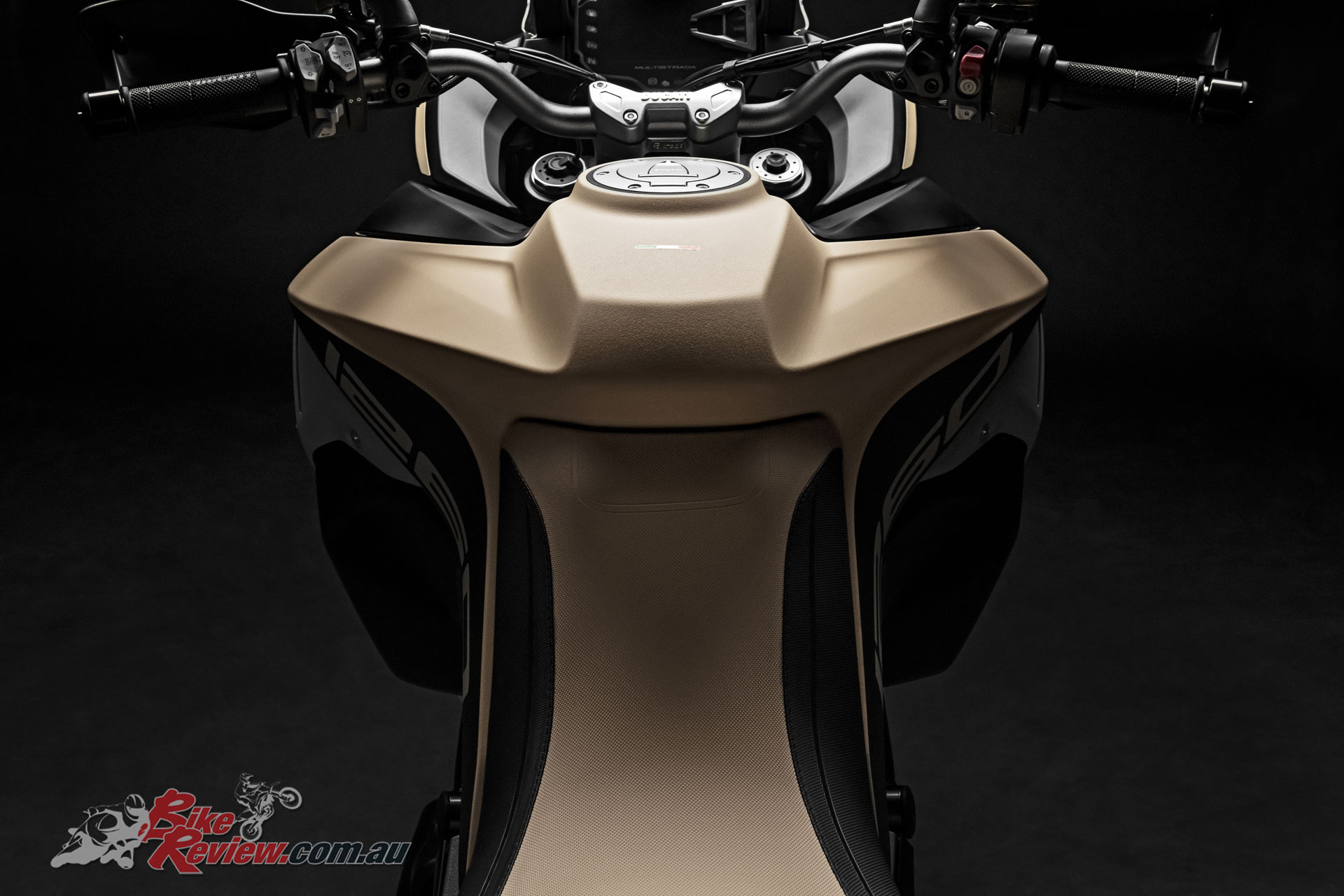 The App also provides comprehensive maintenance deadline info, a user manual and a Ducati Store locator, while letting riders record performance and routes so they can share their Enduro 1260 riding experiences.

The new Multistrada 1260 Enduro will be available in Ducati Red and Sand. There’s also a wide range of dedicated accessories, such as aluminium panniers and top case, and the Touring, Sport, Urban and Enduro packages.

The Multistrada 1260 Enduro will be previewed in November at the EICMA fair in Milan and arrive at dealerships starting from early 2019, with Australian availability and pricing yet to be confirmed. 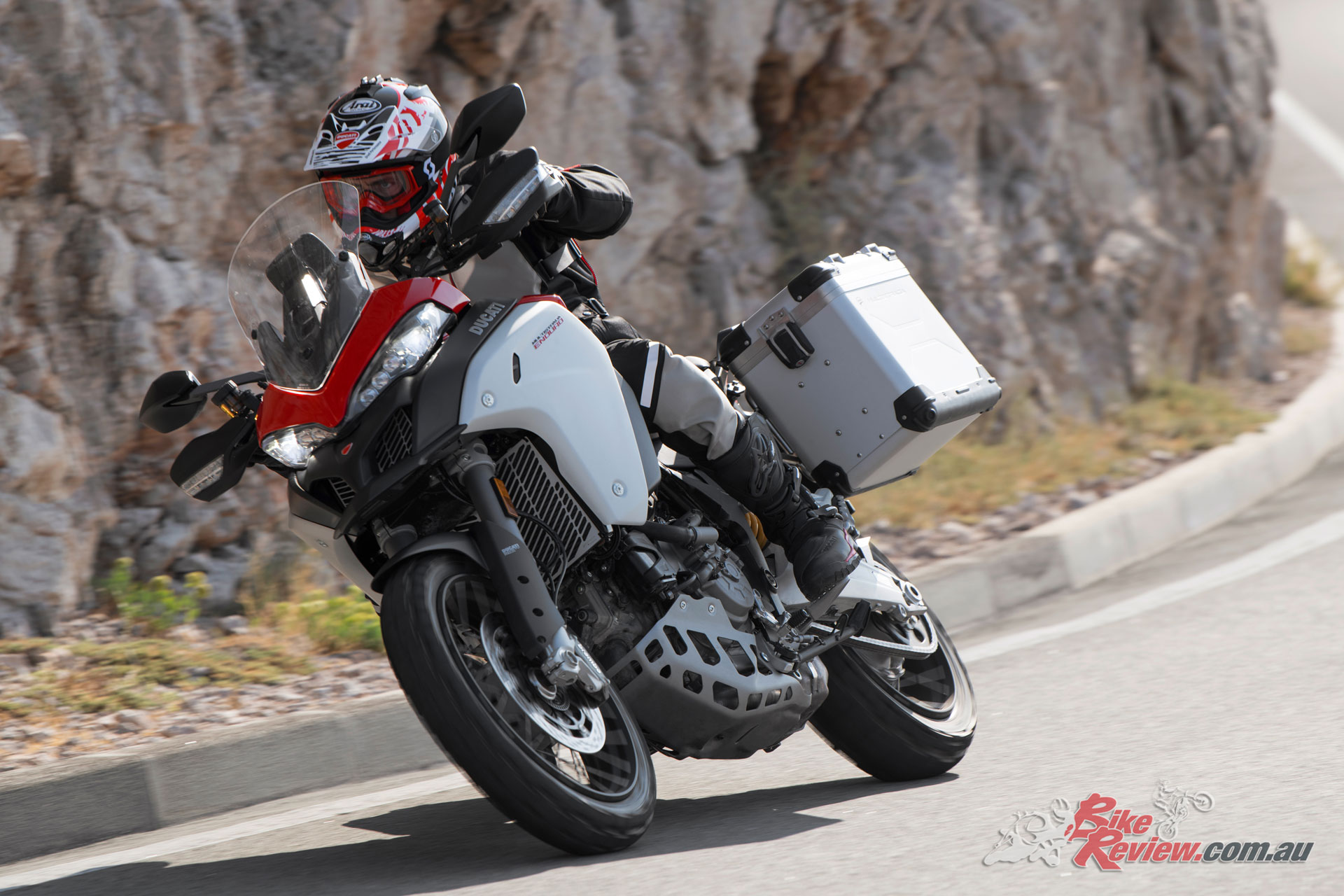 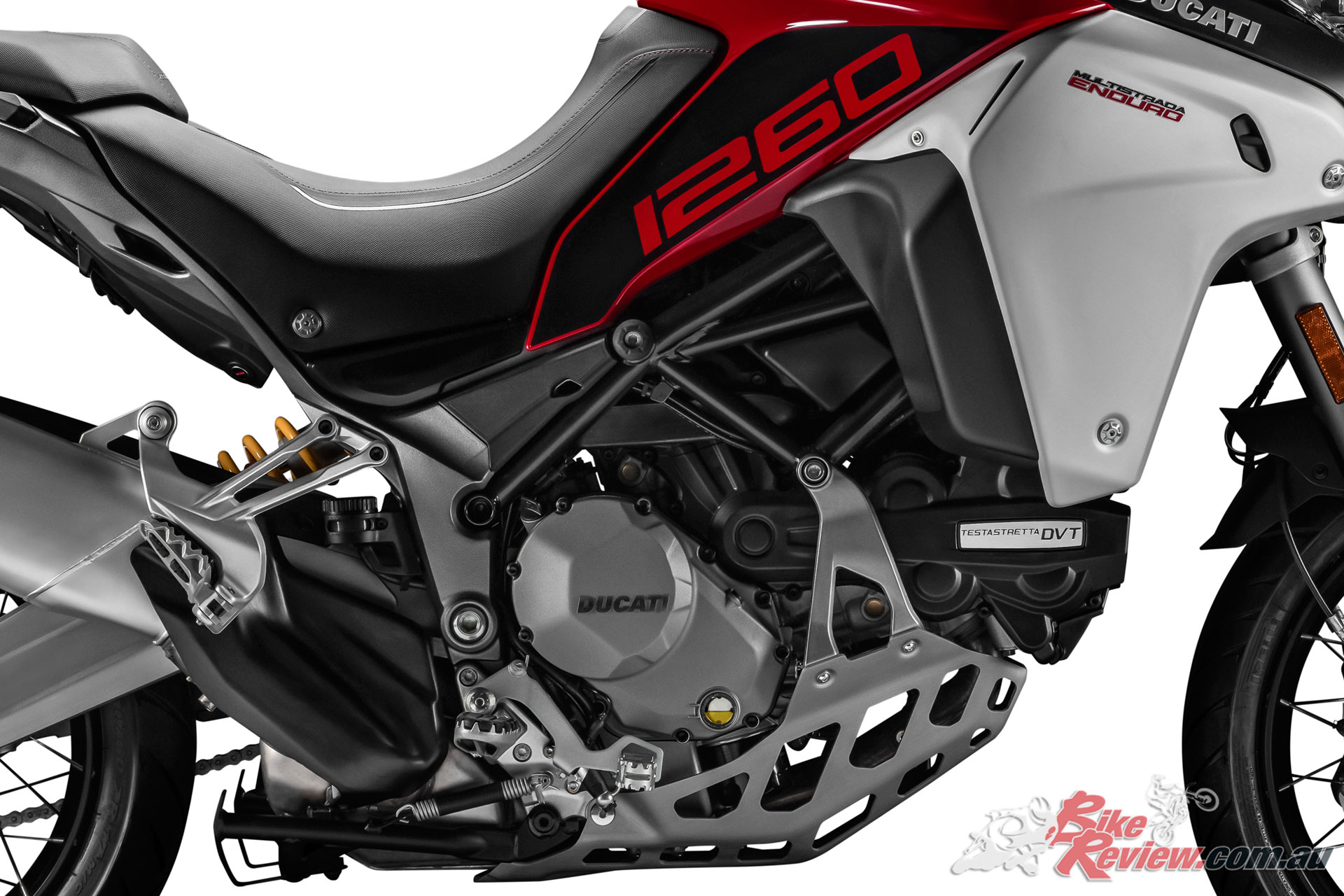 The 2019 Multistrada Enduro will boast the 1260 Testastretta DVT powerplant

With a displacement that now touches 1262cc , the new Multistrada 1260 Enduro engine focused on ensuring maximum, optimal torque delivery throughout the low-mid rev range. 85 per cent of the torque is already available below 3500rpm – which compared to the previous model offers a 17 per cent increase at 5500 rpm.

The new displacement was achieved by lengthening the piston stroke from 67.9 to 71.5 mm (bore remains unchanged at 106 mm). Doing this also meant developing new piston rods, a new crankshaft and new cylinders. Moreover, the DVT system has been recalibrated to maximise torque delivery at low and mid revs, resulting in a higher maximum power of 158hp at 9500 rpm and a maximum torque of 13kgm at 7500 rpm.

At low-to-medium revs, instead, it smooths engine performance, makes power delivery more linear and boosts torque. As every Ducati, the Ducati Testastretta DVT uses the Desmodromic engine valve closure system that has made the brand famous worldwide. 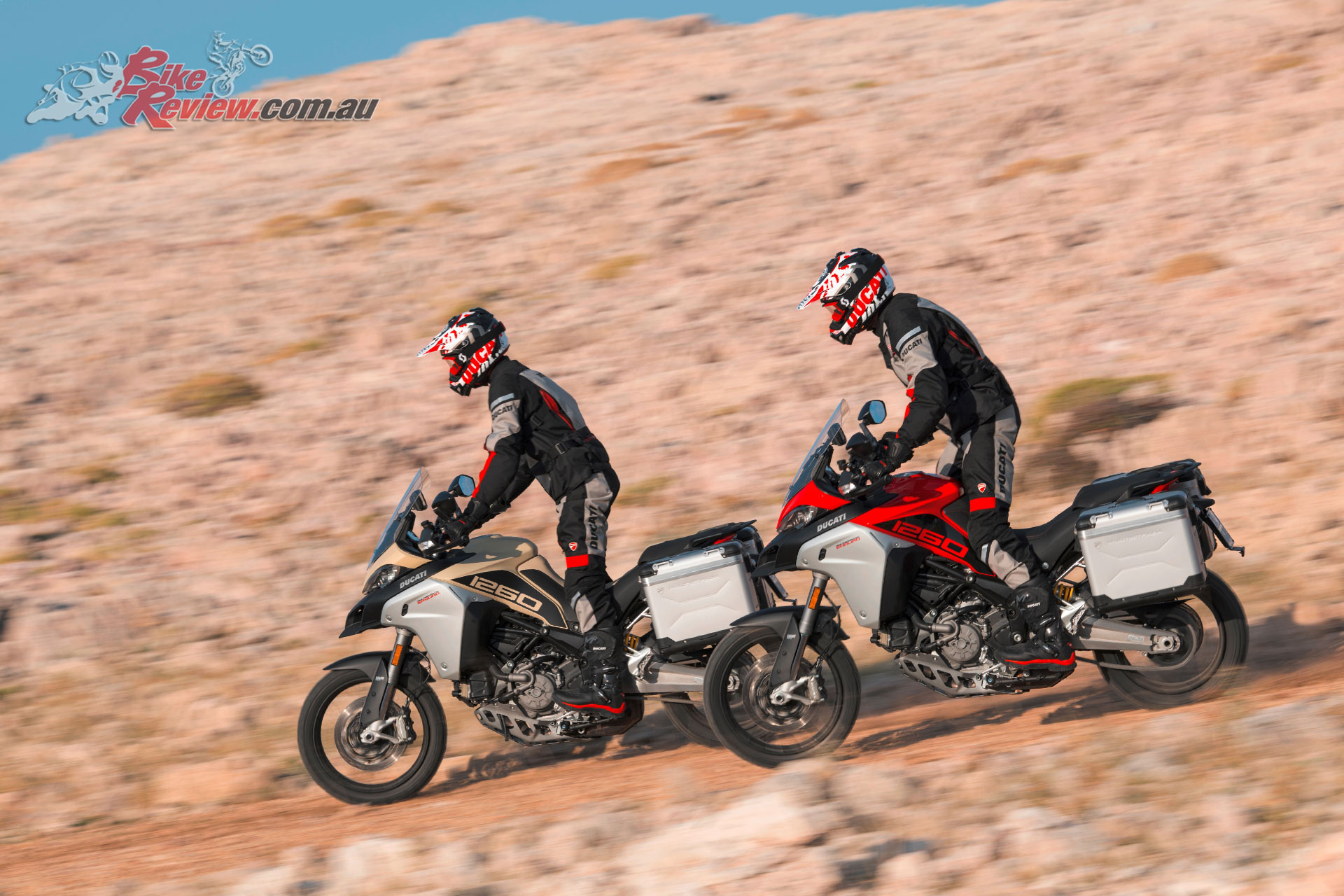 Achieving this performance also involved overhauling the exhaust and intake systems. The exhaust has a new pipe layout, a new pre-silencer internal layout and a new silencer; also, the air intake zone has been redesigned.

Newly designed belt covers feature the DVT logo, now applied on a metallic support, while the engine also has a redesigned alternator cover: this houses a new gear sensor, which is indispensable for the DQS (Ducati Quick Shift) Up & Down system which allows clutchless upshifting and downshifting.

The gear shift linkage has also been changed, with shorter strokes allowing more precise meshing. Compared to the Multistrada 1260, the Enduro version has a six-speed gearbox with a shorter first gear to improve performance in off-road riding. The clutch piston has also been redesigned and is now more compact and integrated.

To improve handling, engine calibration has been completely overhauled, with torque delivery differentiated in each Riding Mode according to the selected gear. What’s more, engine braking control is now differentiated on a gear by gear basis. To hone comfort even further, cruise control has also been recalibrated. 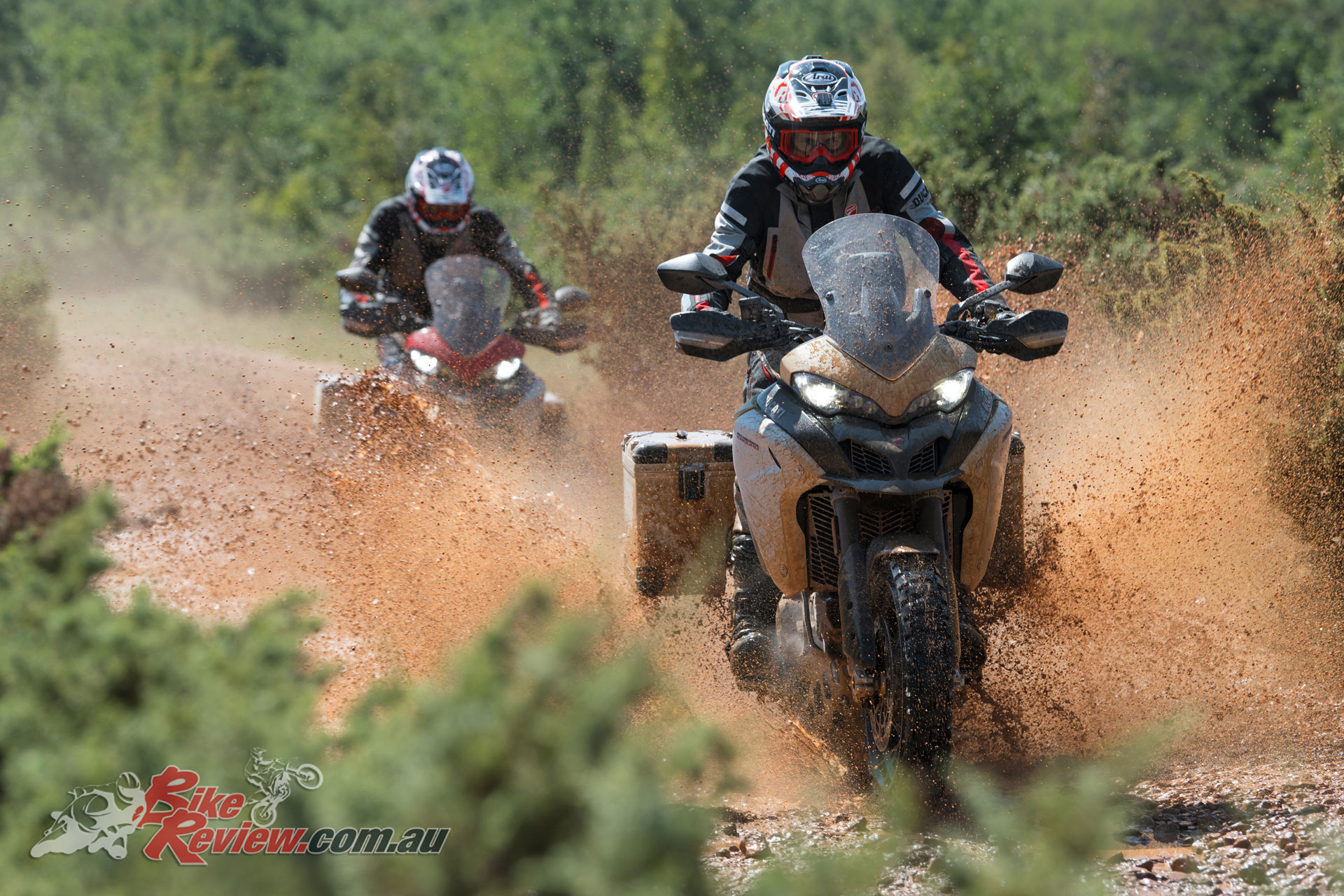 The new Multistrada Enduro also boasts a new dash user interface for easier usability, as well as revisions to a number of systems

The new 1260 Enduro features a host of updates, including a new dash and redesigned interface for a better user experience, as well as an updated IMU – a new 6-axis Bosch IMU (Inertial Measurement Unit) platform which interacts with various systems on the bike.

The high resolution colour TFT display, with the new HMI (Human Machine Interface) makes menu browsing and setting adjustments easier than ever before. With the bike at standstill the rider can use the left switchgear to access a setting menu to activate/adjust various functions such as the personalised DTC and DWC settings and the three ABS Cornering intervention levels.

Semi-active electronic suspension adjustment is also performed via a dedicated menu. Riding Modes can be selected with the bike at standstill or on the move: just choose from Sport, Touring, Urban or Enduro and select the appropriate ride load configuration: rider only, rider with luggage, rider with passenger or rider with passenger and luggage. 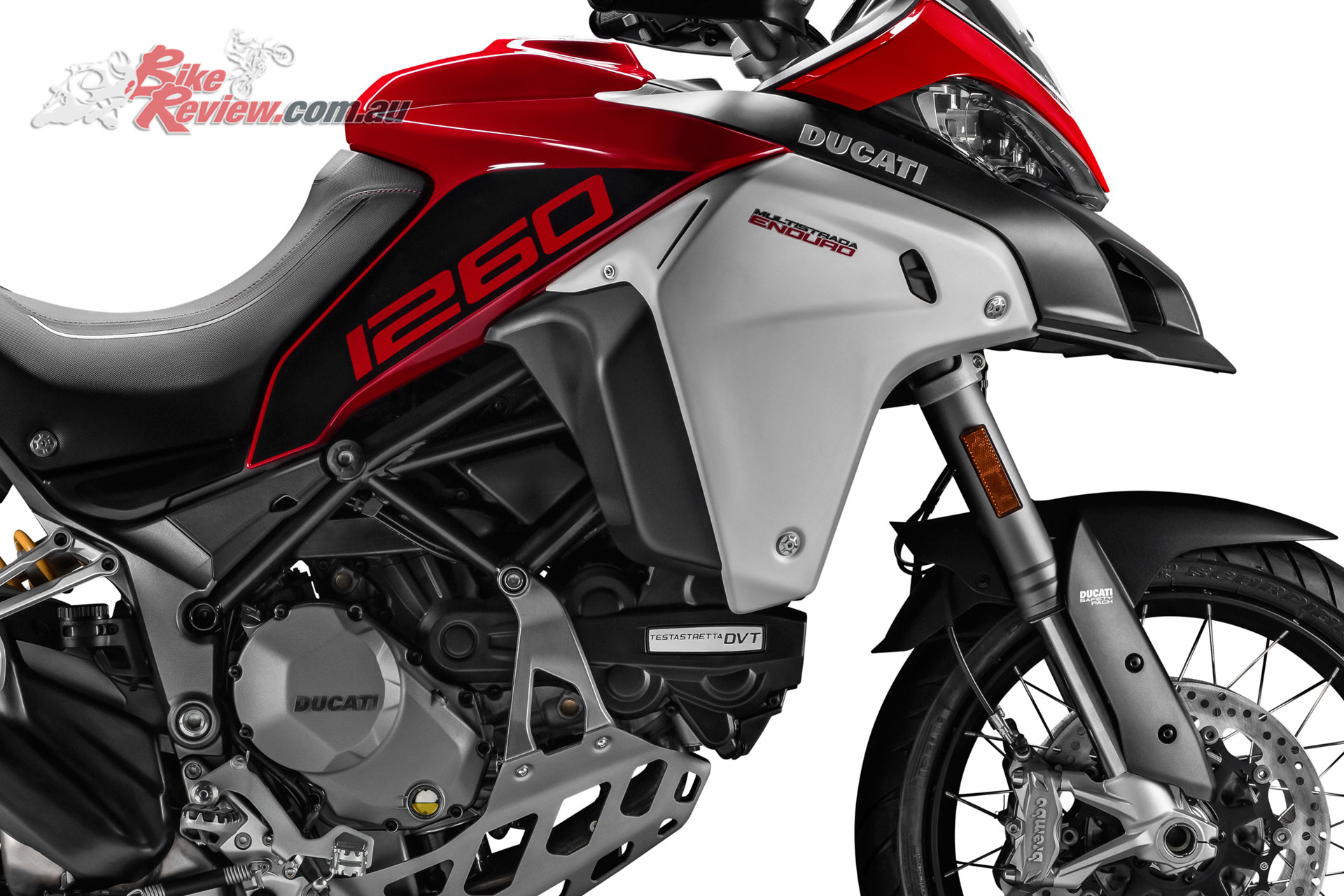 The 49mm Sachs forks have been updated for 2019, with travel on both ends reduced to 185mm

The Multistrada 1260 has an all-new function that switches off hazard lights automatically according to lean angle, a feature possible thanks to the IMU platform, along with the indicators being switched off after completing the turn or once the bike has travelled a prolonged distance (variable between 200 and 2000 metres according to vehicle speed at the time of pressing the indicator button).

The TFT dashboard also incorporates improvements to the music player interface when connected to a smartphone. Standard fitment also includes a centre stand, keyless locking ‘Hands Free System’ with a fob activating the bike, electronic steering lock, and a flip-up key purely for access under the seat and the fuel tank. 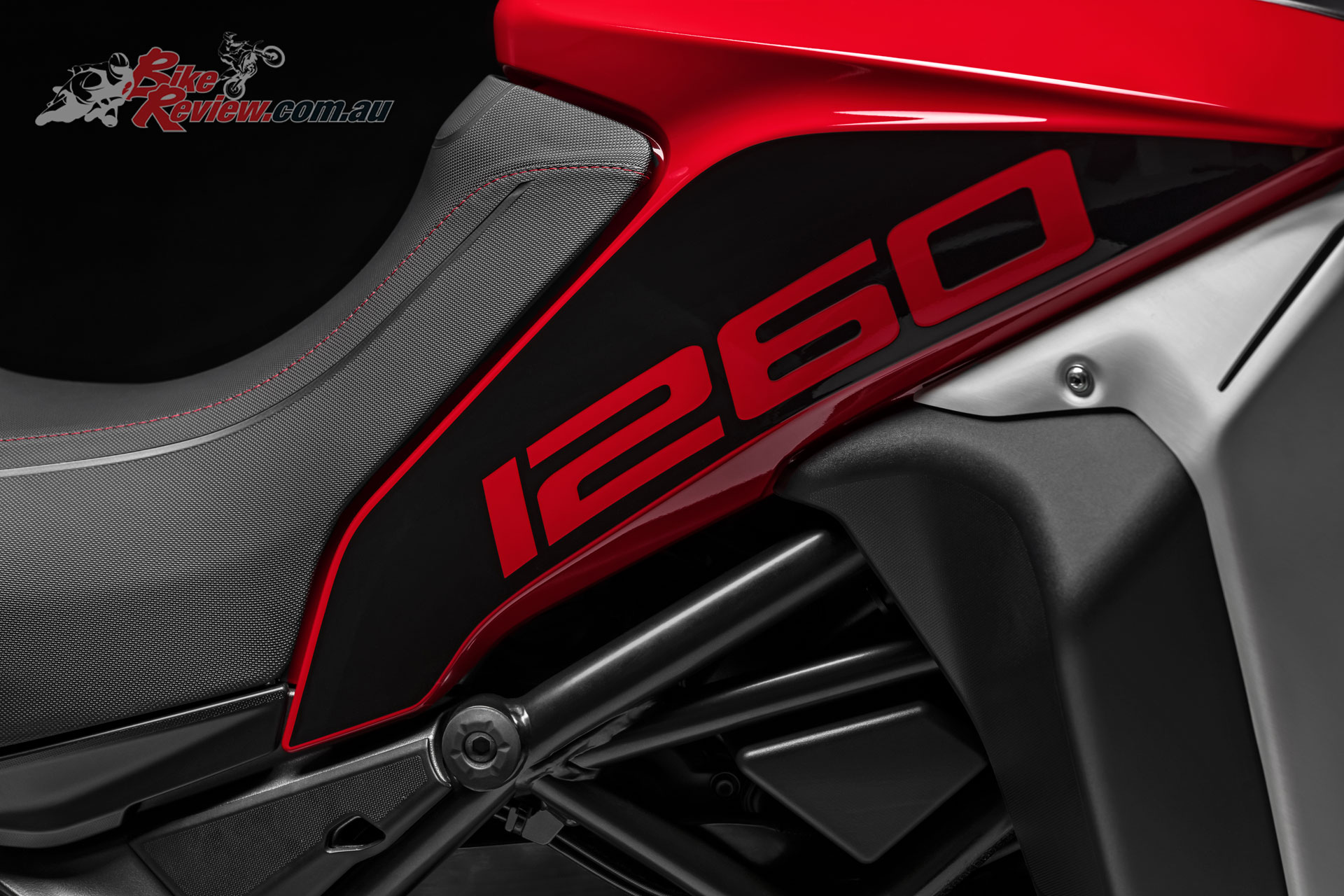 The DSS (Ducati Skyhook Suspension) Evolution system is now an ‘evolved’ version which includes a new Sachs fork with pressurised cartridge and low-attrition forks, a sensor which controls rear shock absorber operation and upgraded software to manage the data flow from the IMU platform. This system is based on a 48mm diameter fork and a rear Sachs shock. Both are electronic.

Rebound and compression damping are adjusted continuously according to a semi-active approach that ensures optimal vehicle balance. DSS Evolution technology analyses data from numerous sensors on the sprung and unsprung weights of the bike to calculate and set the damping needed to make the ride as smooth as possible.

The DSS Evolution processes this information via a semi-active control algorithm that, by referring to an imaginary fixed point in the sky above the bike, makes extremely rapid adjustments to the hydraulic dampers to minimise vehicle movement in relation to this point: just as if the bike were suspended from it (hence the term “skyhook”).

The system has practically unlimited configuration potential, as the rider can electronically select 400 parameter combinations via the new interface. 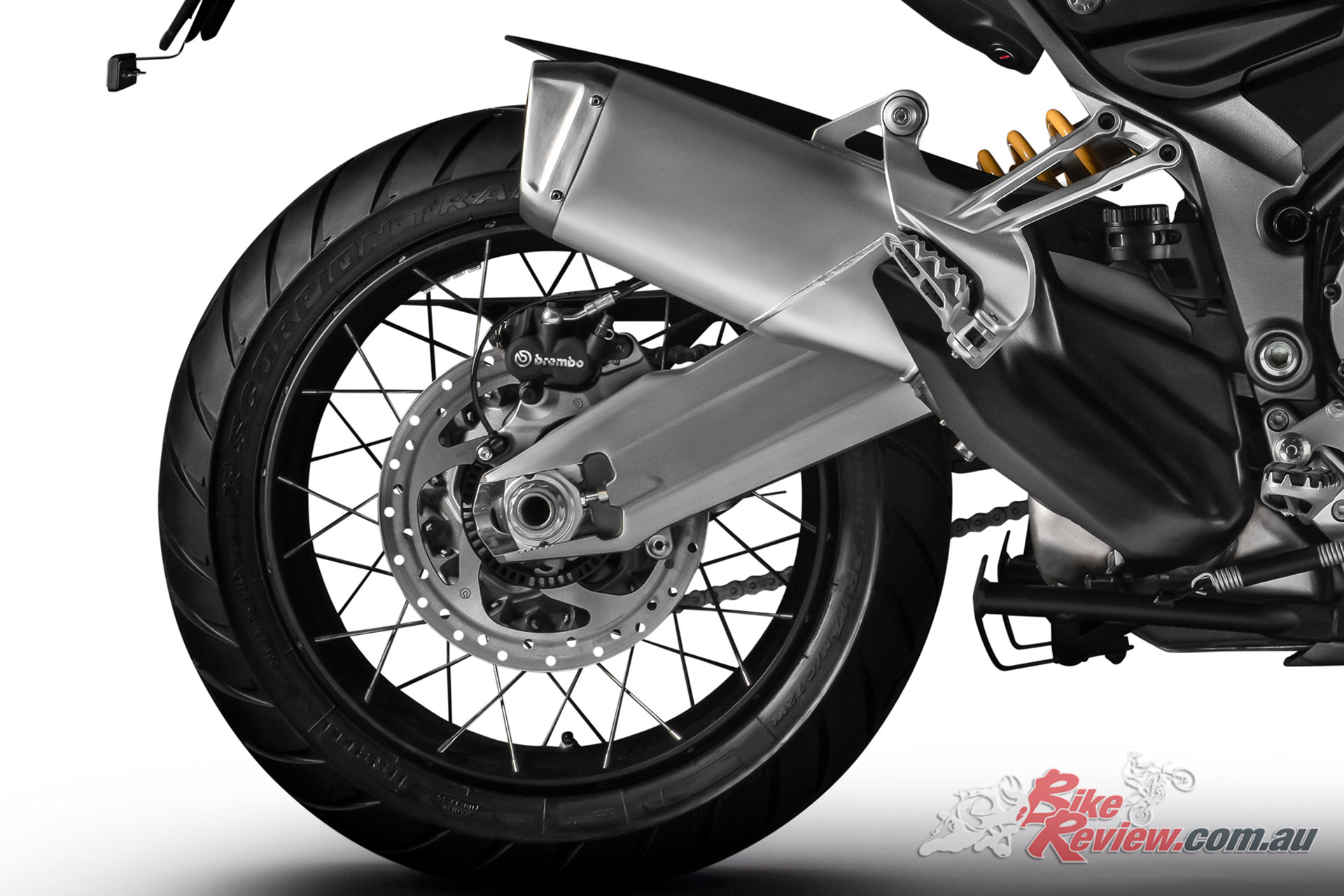 The new 1260 Enduro also boasts a new double-sided swingarm which saves half a kilogram in weight over the outgoing model, while the bike mounts a solid frontal Trellis frame with large-diameter, low-thickness tubing while the two lateral sub-frames are closed off by a rear load-bearing techno-polymer fibreglass element to maximise torsional rigidity. A  Sachs steering damper is also standard fitment.

Revised ergonomics including the seat, handlebar and centre of gravity all also move weight lower and make for an easier to handle machine for a variety of riders.

The wheels are also revised, measuring 3.00 x 19″ at the front and 4.50 x 17″ at the rear and boasting a 2kg weight saving across the two wheels, while also being clad in Pirelli Scorpion Trail II tyres. 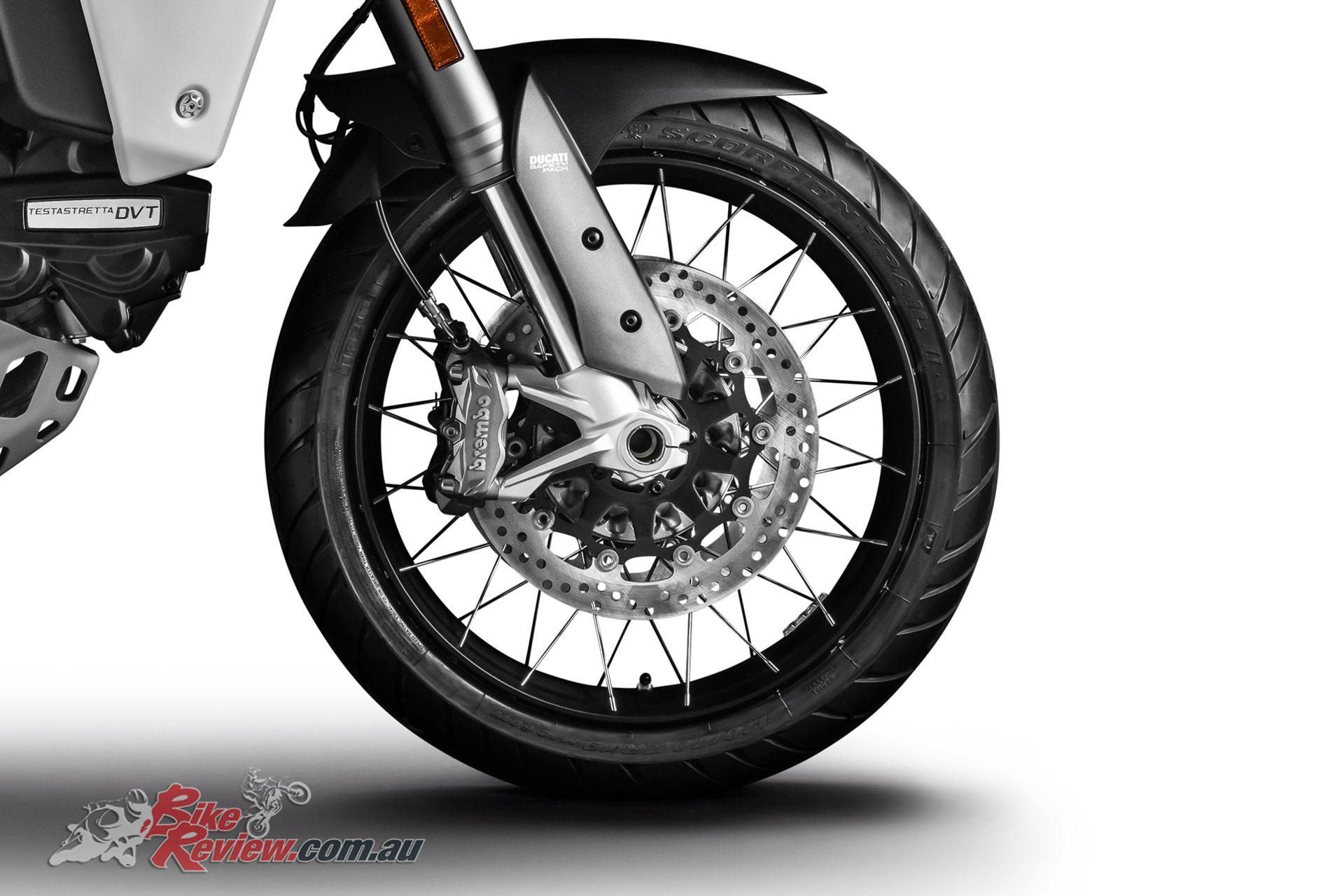 High spec Brembo M4.32 calipers on 320mm rotors are backed up by Bosch 9.1ME cornering ABS, which is tuned for each mode

The new Multistrada 1260 Enduro features a Brembo braking system with the ABS 9.1ME Cornering device, as part of the Ducati Safety Pack (DSP). Cornering ABS makes use of the Bosch IMU (Inertial Measurement Unit) platform to optimise front and rear braking power even in situations with the bike at considerable lean angles. n.

Thanks to an ABS control processor, the Multistrada uses an Electronic Combined Braking System (which merges front and rear braking). This is optimised for Urban and Touring Riding Modes but has a lower degree of intervention in Sport mode where fully automated control is less desirable. The combined braking system increases stability by using four pressure detectors to allocate braking power optimally between front and rear. 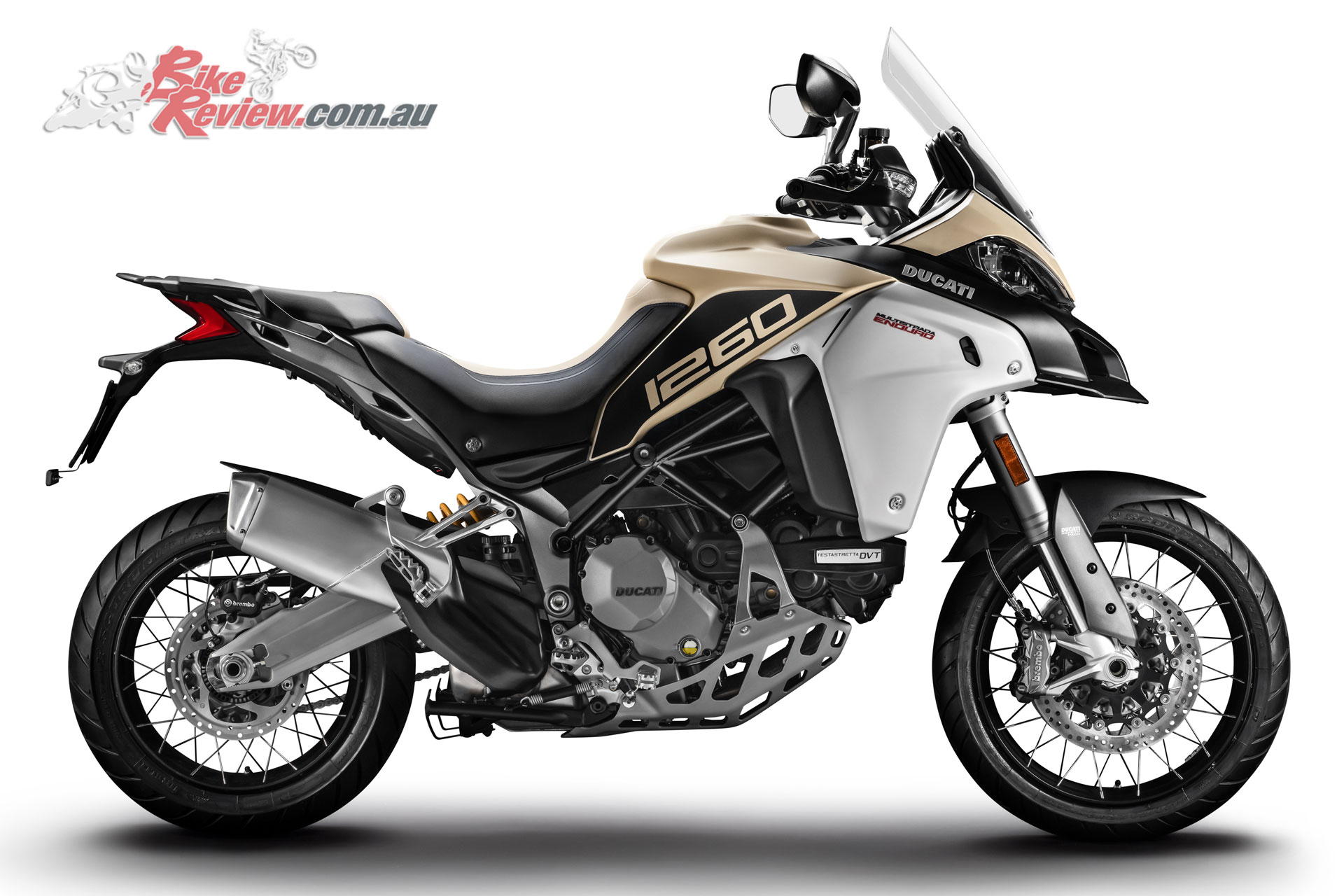 Designed to improve rear tyre control during hard braking, the ABS wheel lift detection function is fully enabled in Urban and Touring Riding Modes yet disabled in Sport and Enduro mode. The ABS function can also be limited to the front brakes, a feature the Multistrada uses in Enduro Riding Mode to let the rear wheel drift when braking on uneven surfaces. The ABS can also be disabled via the instrument panel in Enduro Riding Mode and settings can be saved and recalled at the next Key-On.

The ABS also features the Vehicle Hold Control (VHC) system. When activated, the this system holds the vehicle steady by applying rear wheel braking (if unused, automatic deactivation occurs after nine seconds). This makes restarts easier because it modulates brake pressure during starts, leaving the rider free to focus on throttle and clutch. 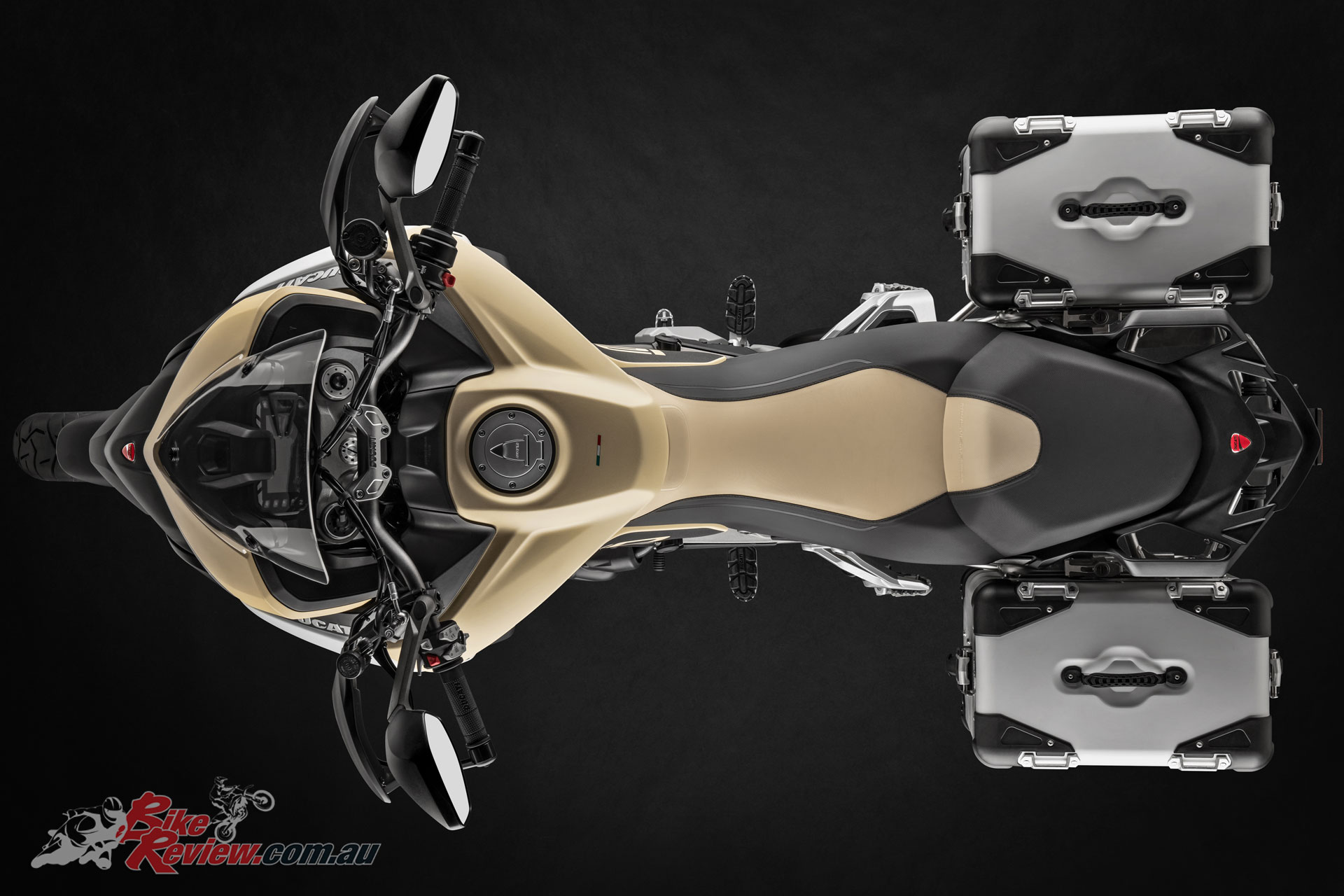 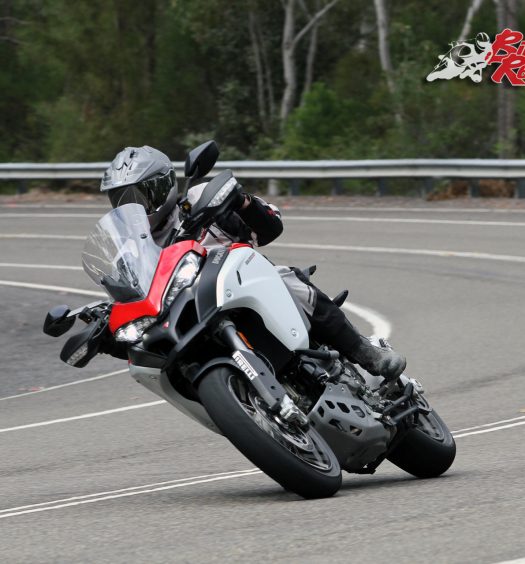 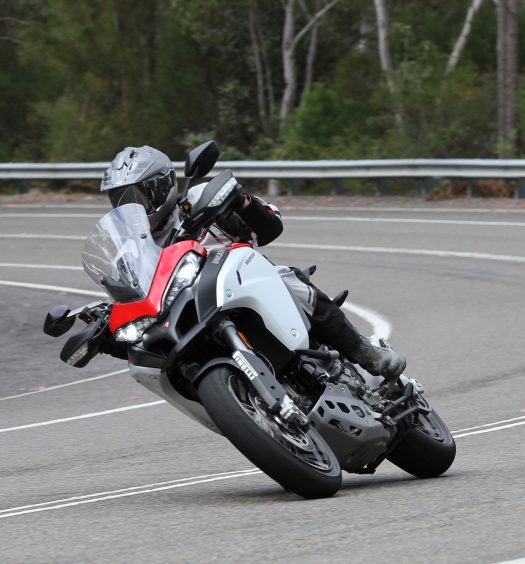