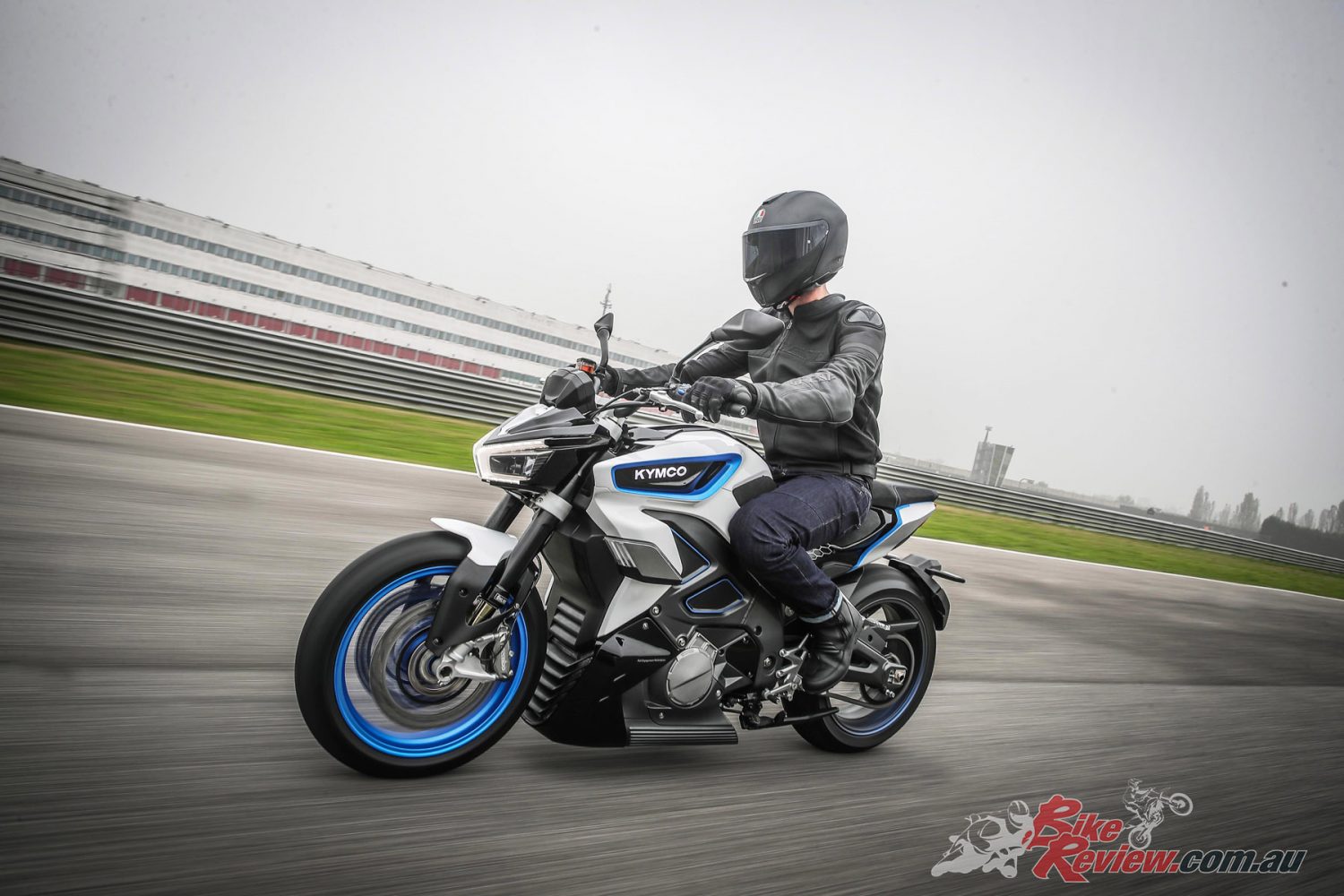 The RevoNEX is an all-electric motorcycle that Kymco say it is not just about electric technology but more so about building easily accessible and all-round performance into a bike to make it an all-out fantastic street bike, electric or not… no details are available about range, weight, power or pricing… However, here is what we have found so far from Kymco. 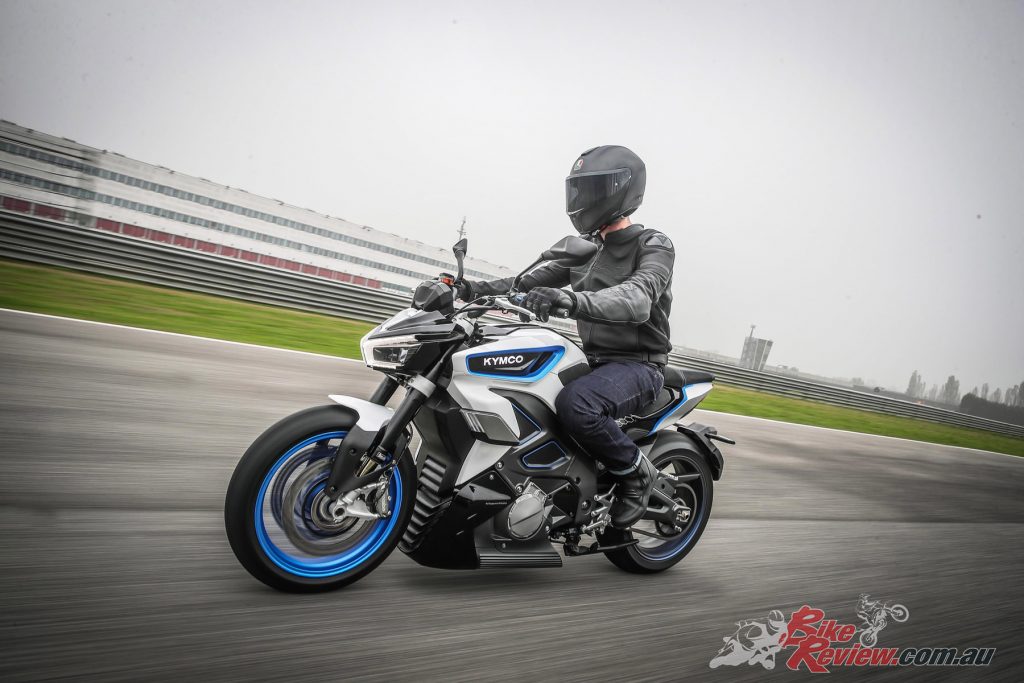 No information is available about range, speed or output of the RevoNEX yet.

Last year at EICMA 2018 Kymco introduced the SuperNEX. This year Kymco again pushed the envelope for electric motorcycles by setting a new benchmark for the next era of high performance street bikes. RevoNEX inherits the design architecture of SuperNEX and comes to life in five tangible distinctions: Gears, Performance, Control, Sound, and Modes.

Riders can make their own gear changes to their own liking, whether that be on country roads, city streets or highways. They can also stick with the right gear in the stop-start city traffic without having to worry about clutch operation or engine stalling. 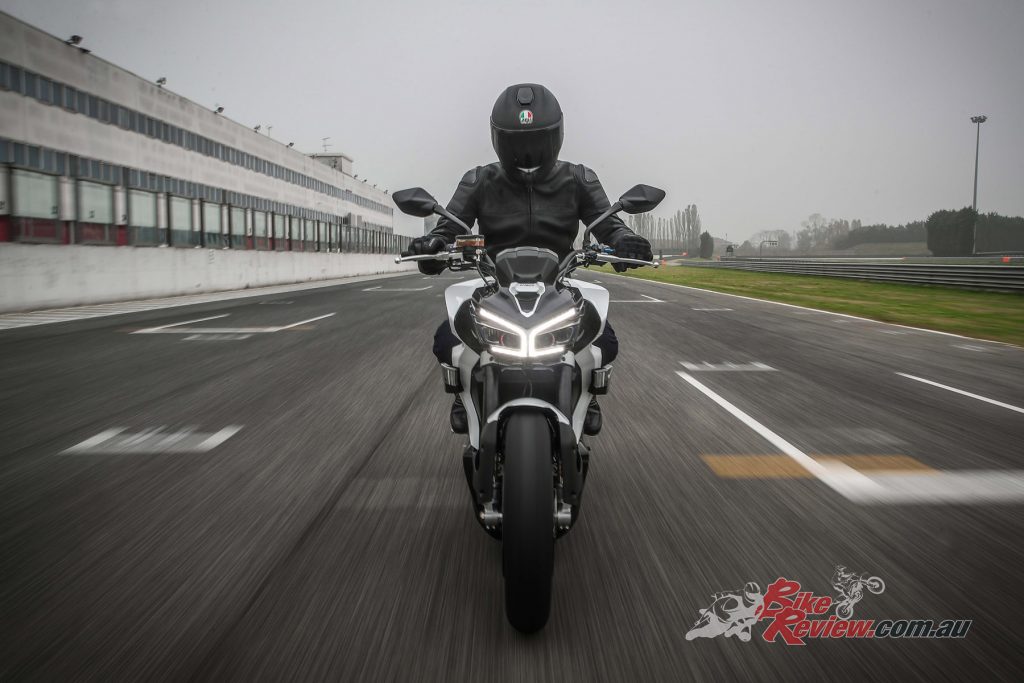 The RevoNEX is the first electric bike with a six-speed manual gearbox.

Performance – Kymco EFA
Kymco EFA, or Electric Full-range Acceleration, was engineered around the aspiration that the best acceleration feels like a completion of a thought. We don’t know what that means! The calibrated electric motor ensures instant throttle response and continuous power delivery.

The fusion of the electric powertrain and the six-speed transmission further allows riders to make use of the most optimal powerband of the motor. Kymco claims the RevoNEX can go from 0 to 100km/h in 3.9 seconds, and from 0 to the top speed of 205km/h in 11.8 seconds.

In the city when gear shifting is not desired, Kymco claims that second gear alone can provide effortless yet monstrous acceleration up to 115km/h. Kymco EFA allows street bike riders to enjoy the astonishing performance of the vehicle on every occasion. 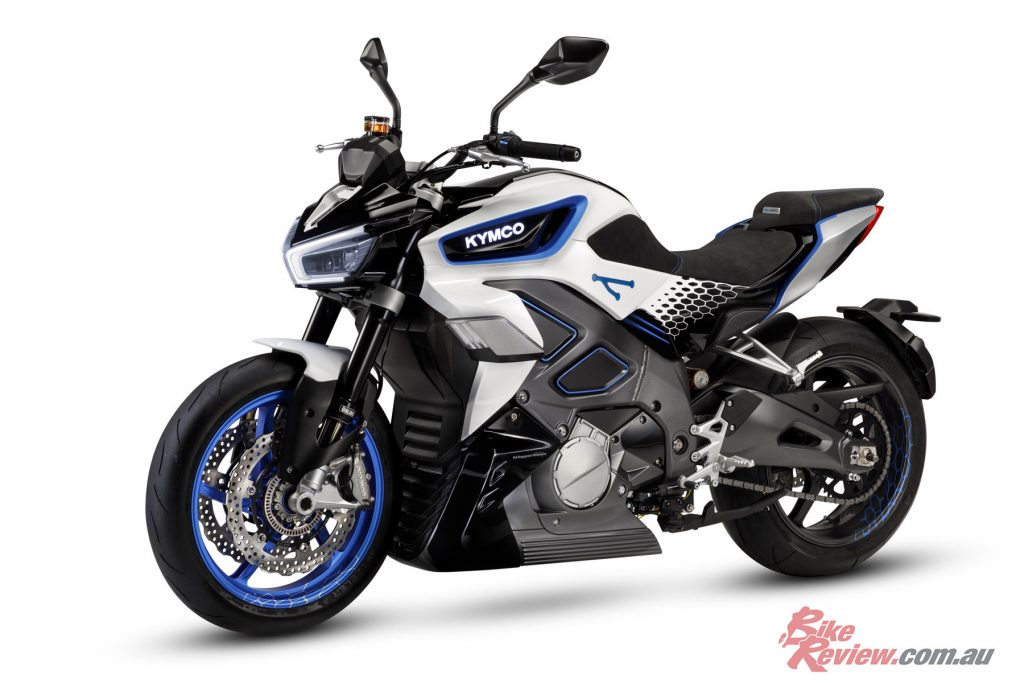 It looks to have good quality brakes and running gear.

Control – Kymco FEP
Full Engagement Performance, or FEP for short, is an advanced performance management system that allows the rider to confidently enjoy the full potential of the vehicle.

With FEP, riders can repetitively perform a perfect launch at every green light. When riding through uneven pavements or potholes commonly found on busy city streets, FEP ensures there is no wheel slippage. Like electric traction control. 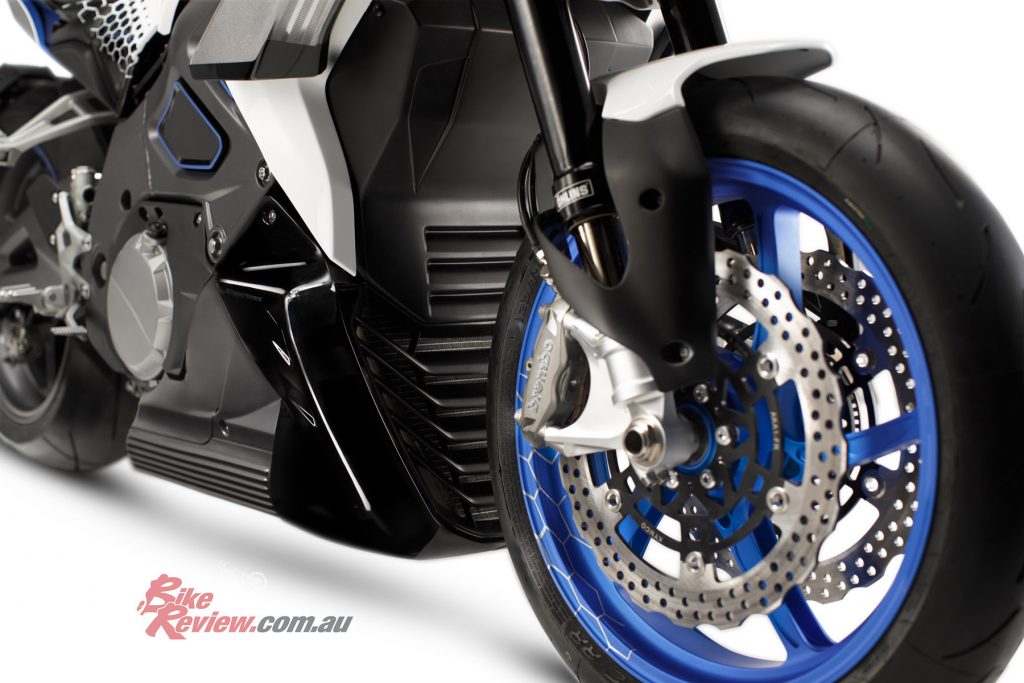 Sound – Kymco AAM
The RevoNEX will offer Kymco AAM, or Active Acoustic Motor. The motor is designed with a multi-frequency acoustics generator that enhances the native sound of the motor.

Combining the resonating sound of AAM with the mechanical sound of the transmission, Kymco reckons the acoustic note of RevoNEX has profound depth and complexity. It conveys the heartbeats of the bike and communicates the load condition of the motor; it gives the rider situation awareness. 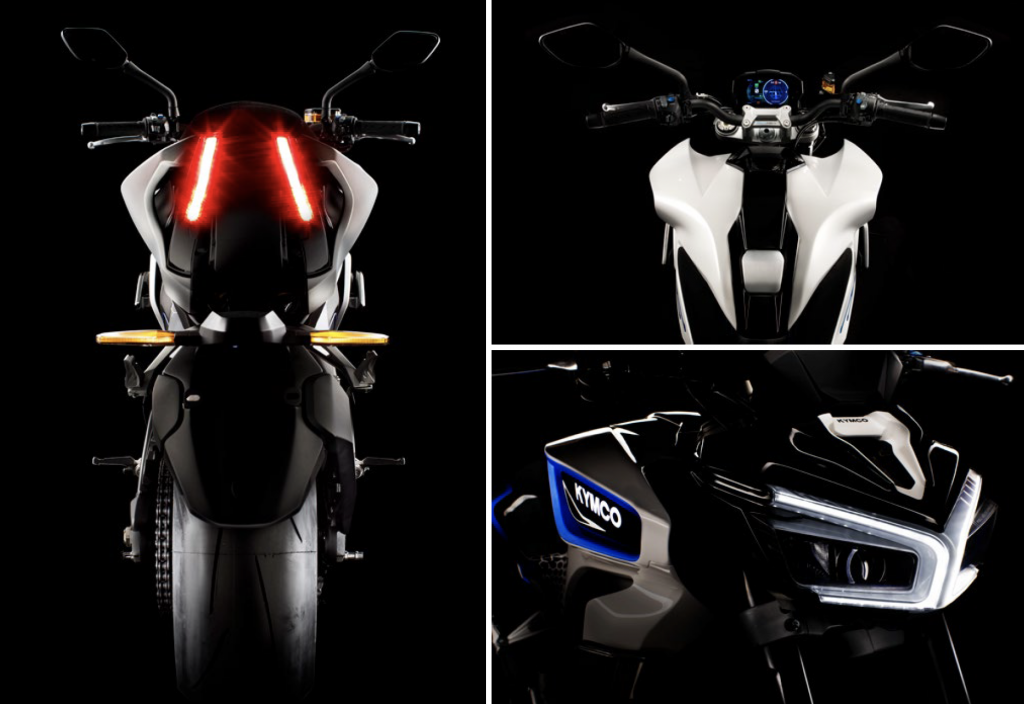 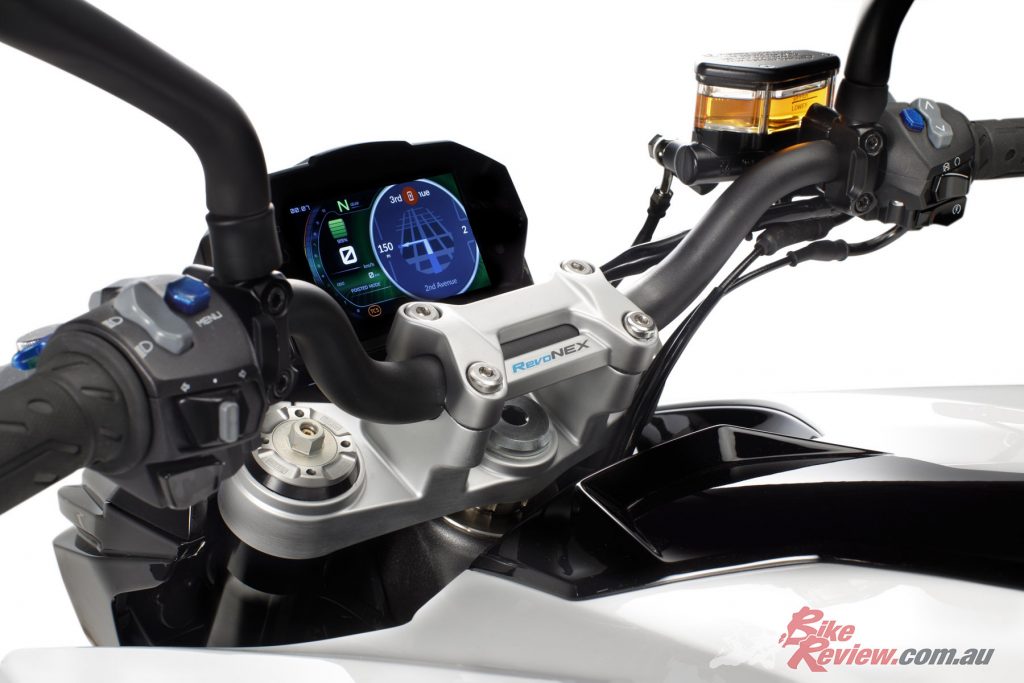 There are four oddly made riding modes as well as a type of traction control.

The four modes as described by Kymco; (1) Poised, which allows the riders to glide through the streets quietly; (2) Assertive, which displays the rider’s inner strength with power and civility; (3) Bold, which gives riders immense might for occasional spirited riding; (4) Extreme, which screams out the passion hidden within the rider’s heart. We have no idea what any of that means, but we’ll have some of what Kymco’s marketing team is taking! 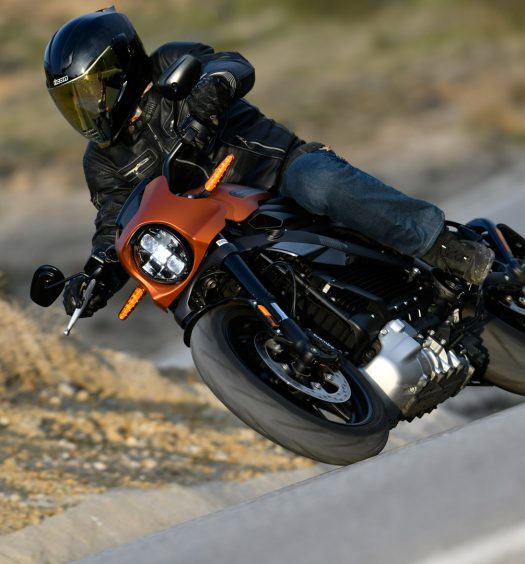 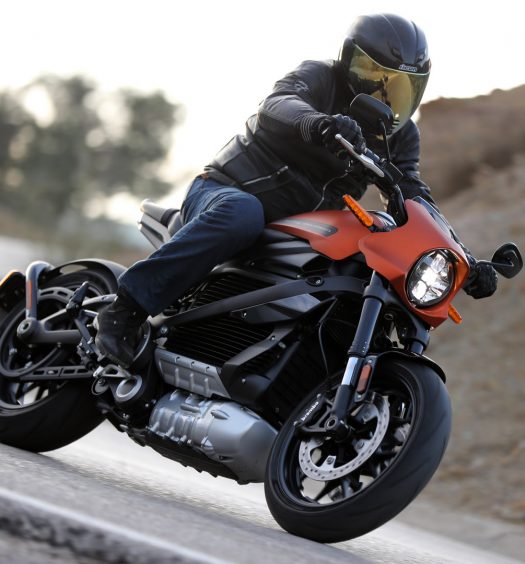