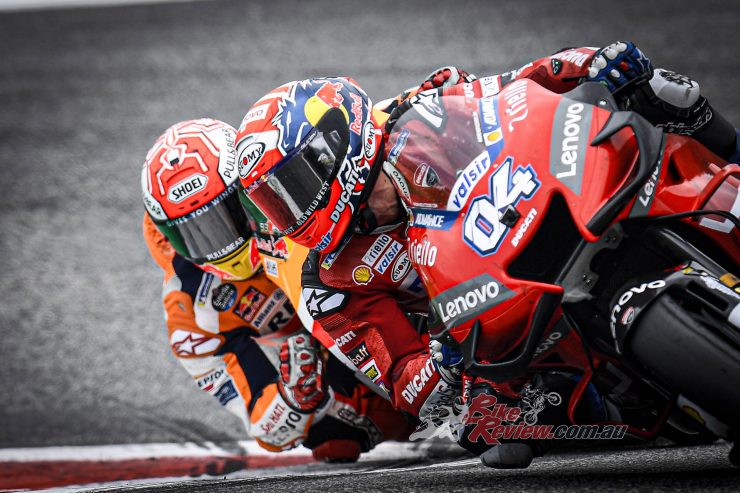 Do not adjust your set: that was Andrea Dovizioso (Ducati Team) slicing past Marc Marquez (Repsol Honda Team) at the final corner as the Italian turned the tables on the reigning Champion, the hunted turning hunter to keep Ducati’s 100% winning record at the Red Bull Ring intact. After all-out war in Austria, ‘DesmoDovi’ became the first repeat winner since the venue’s return to the calendar in 2016, with the gloves coming off early as a vintage Dovi vs Marquez duel lit up the Red Bull Ring. The Italian has won most of them, but in Spielberg he didn’t play defence. Fabio Quartararo (Petronas Yamaha SRT) completed the podium after another impressive ride from the rookie, equalling Yamaha’s best result at the track. 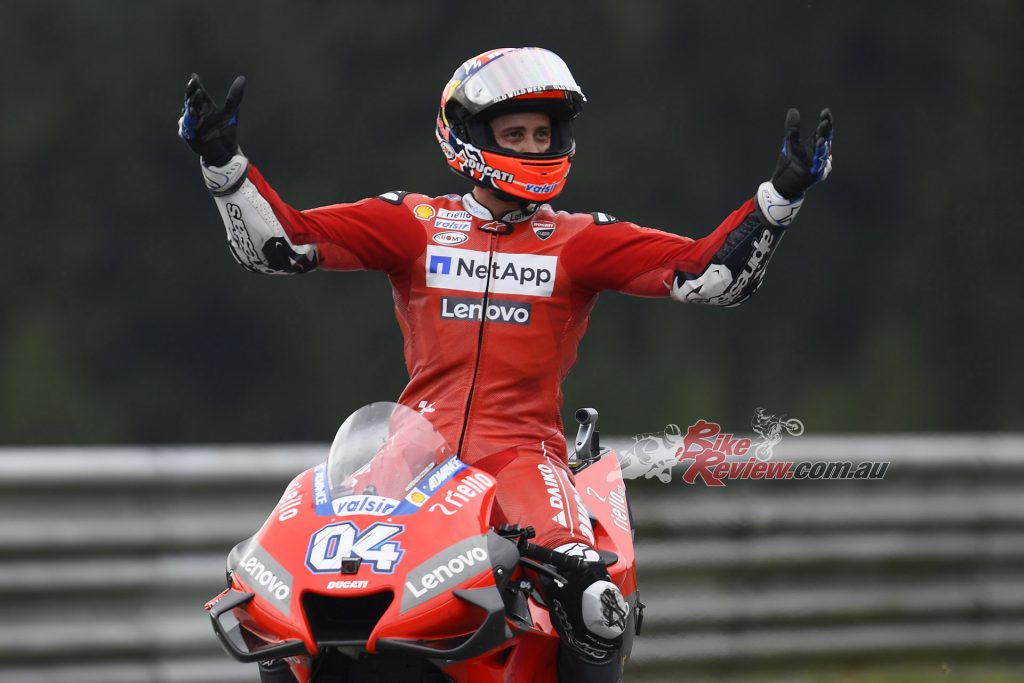 Polesitter Marquez was lightning off the start but so was Dovizioso as the two pre-race favourites headed into Turn 1 already locked together, despite Jack Miller (Pramac Racing) heading in slightly hot and almost clipping the number 4 Ducati ahead of him. But all’s well that ends well and this was just the beginning, with the Italian and Spaniard even making slight contact on the run into Turn 3 at 300km/h. Marquez was on the inside and Dovi on the outside, but the number 93 went in hot and ran wide, the Ducati then also forced to sit up. That let Quartararo sweep through to lead, with Miller and Team Suzuki Ecstar’s Alex Rins then also pouncing on the exit and Marquez having another wobble as he gassed it to try and slot back into the pack. 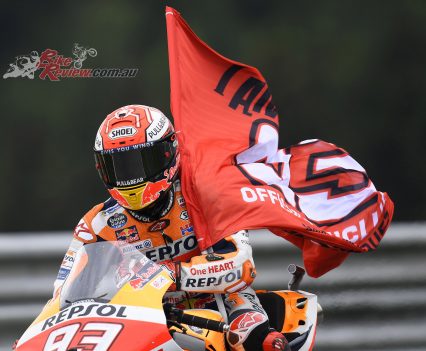 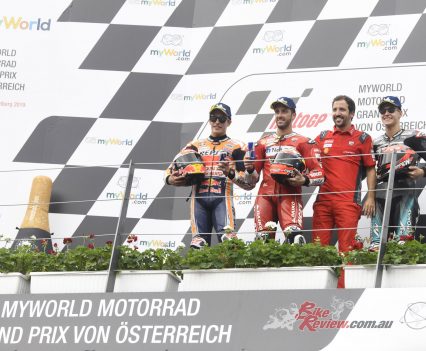 Dovizioso was behind Marquez after the shuffle, but he was back past into Turn 4 as Quartararo started putting the hammer down in the lead. The Frenchman was 0.5 ahead onto Lap 2, but Dovizioso and Marquez started to make up ground as they recovered from a frantic opening lap. Dovi was soon back up to second, with Miller holding off Marquez – for the time being – and fast-starting Valentino Rossi (Monster Energy Yamaha MotoGP) not far off, ‘The Doctor’ climbing his way up to fifth from P10 in the opening exchanges and initially in the battle for the podium. 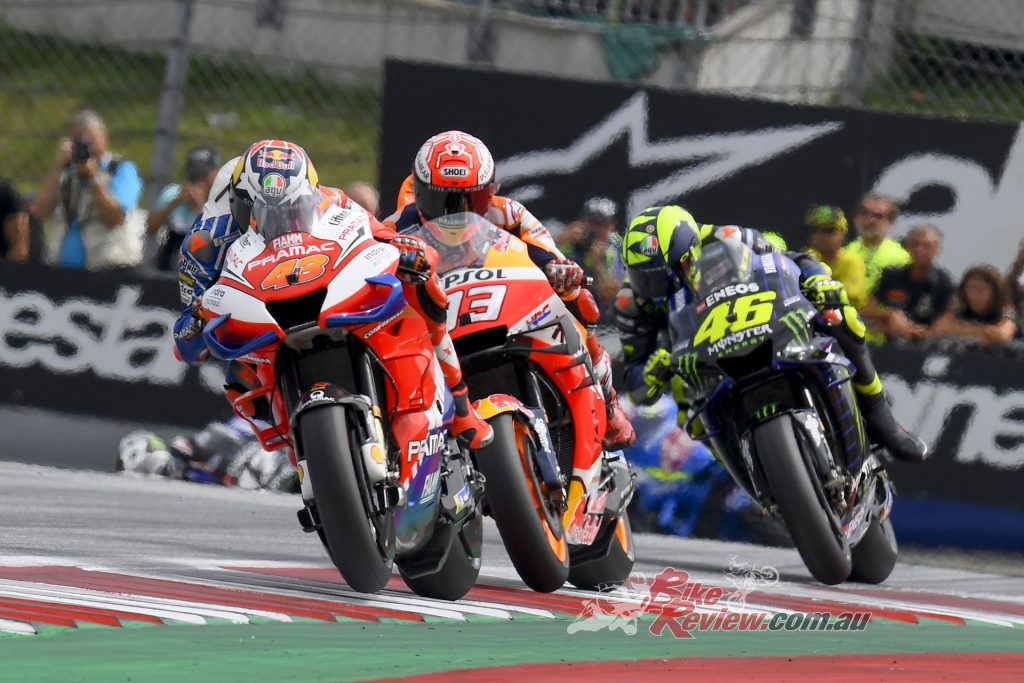 Before long, Marquez had dispatched Miller and the top three started to edge away from the number 43, Rossi and Rins. Then on Lap 7, Quartararo was under serious attack: Dovizioso blasted past into the lead, before Marquez shot past the Yamaha moments later. The two were back in front, and the duel was just getting started.

The pin wasn’t yet pulled, however, with the top five remaining within a second and a half before heartbreak struck for Miller as the Australian slid out at Turn 9. Just metres ahead on track, Marquez struck for the lead at the final corner, too, and then the duo started to pull clear. Not by a massive margin each lap, but Quartararo couldn’t match the pace of the Ducati and Honda as another almighty Austrian battle started to take shape. 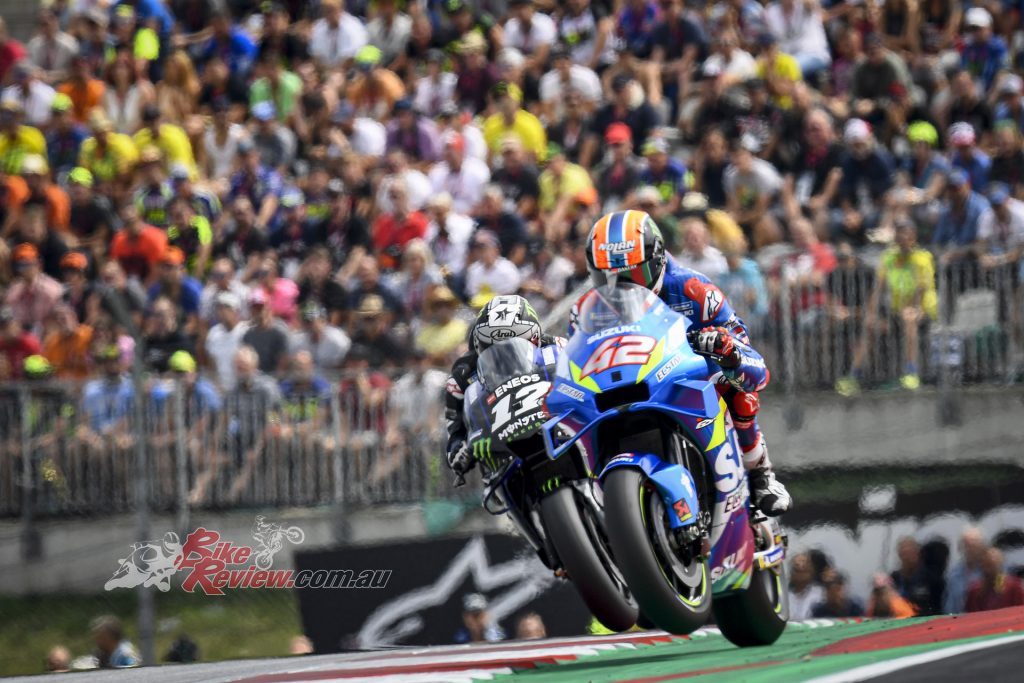 Marquez threatened to stretch away but the gap didn’t rise above 0.4 seconds, with the number 93 strong in the first half of the lap and Dovizioso the stronger in the second part. The laps ticked by and there was nothing between them, Dovizioso shadowing the reigning Champion. Then, out of nowhere, a move was made with nine to go. Dovizioso powered alongside Marquez, and the number 93 even looked across at the Italian heading into Turn 1. But the Ducati made the pass stick and it was now the 2017 Austrian GP winner in control.

Tensions were bubbling to boiling point for the next five laps, with Marquez trailing Dovi by 0.1, 0.2. The question was not if, but when and where. Then, with three to go, we found out. Turn 7 was the unlikely location as Marquez stuck it underneath Dovizioso to take back the lead, and it settled back into strategic chess until Turn 1 on the penultimate lap as the number 04 went for it. Could he make it stick? Not quite, Dovizioso running wide and Marquez straight back through. 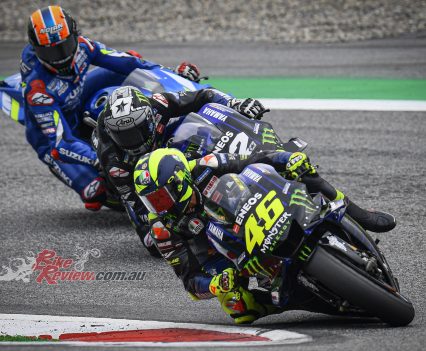 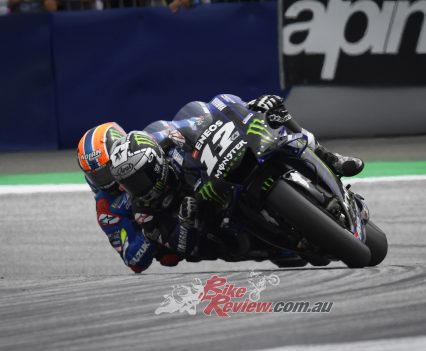 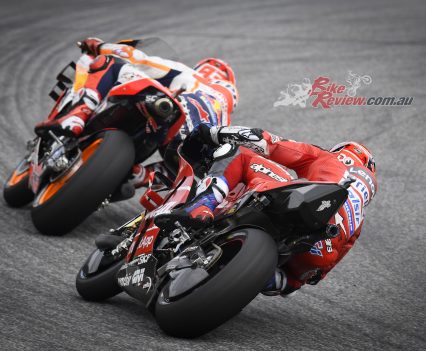 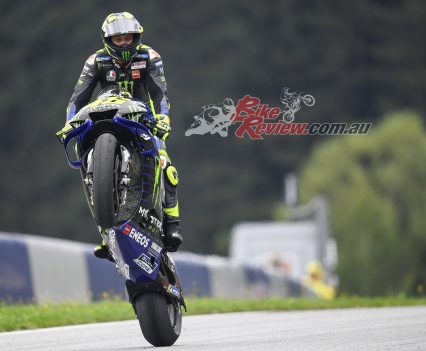 Onto the last lap, there was nothing separating the leaders and again, Dovi went for it at Turn 1 but ran wide, so it was Marquez who led going down into Turn 3. The Italian was close but not close enough around the final lap, and it started to look like the Borgo Panigale factory’s stranglehold on the Red Bull Ring could be under threat. But it was far from over as down to the last sector, with the two glued together once again as the Ducati powered up the hill out of Turn 8. He was close, but no pass came at Turn 9. It was going down to the wire.

Heading into the last corner, the Ducati pulled out from behind the Honda as Dovizioso pulled a Marquez – pushing his machine into the gap and on the verge of creating space rather than using it. It was roles reversed from 2017 as the Italian lunged down the inside, keeping it perfectly pinned to deny Marquez and power towards the line ahead for his second win of the season. With no chance to strike back, Marquez was forced to settle for second. 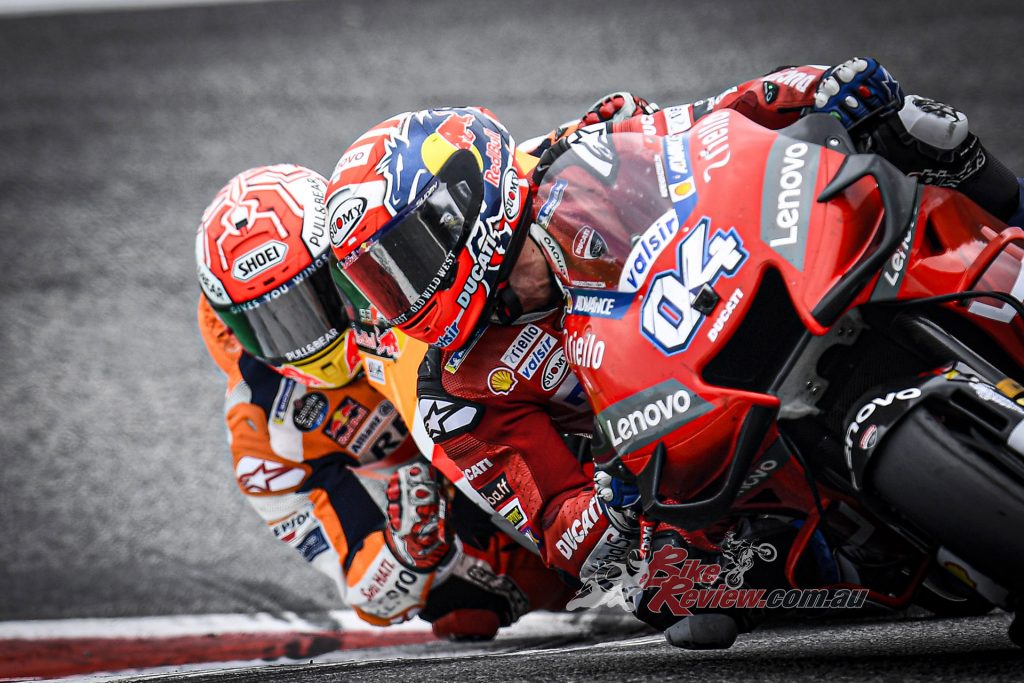 Behind the duel, Quartararo took the chequered flag in a lonely third to claim his third MotoGP™ rostrum and bank another huge haul of points in his impressive 2019, coming home top rookie, top Independent Team rider and top Yamaha – equalling the Iwata factory’s best result at the track from 2016.

Just behind him, Rossi had been caught by teammate Maverick Viñales and  Suzuki rider Rins as the trio battled for fourth, with Rossi ultimately able to pull a tenth or two clear of Viñales as three Yamahas sat in the top five at a tougher track for them. Rins, meanwhile, was only 0.021 off the number 12, the number 42 running it close and only just fended off.

Behind the Yamaha train, Francesco Bagnaia (Pramac Racing) took P7 and a big haul of points after a much more positive weekend, finishing just ahead of fellow rookie Miguel Oliveira (Red Bull KTM Tech 3). The Portuguese rider finished as the best KTM on the Austrian factory’s home turf, taking a sensational P8 and some serious scalps. 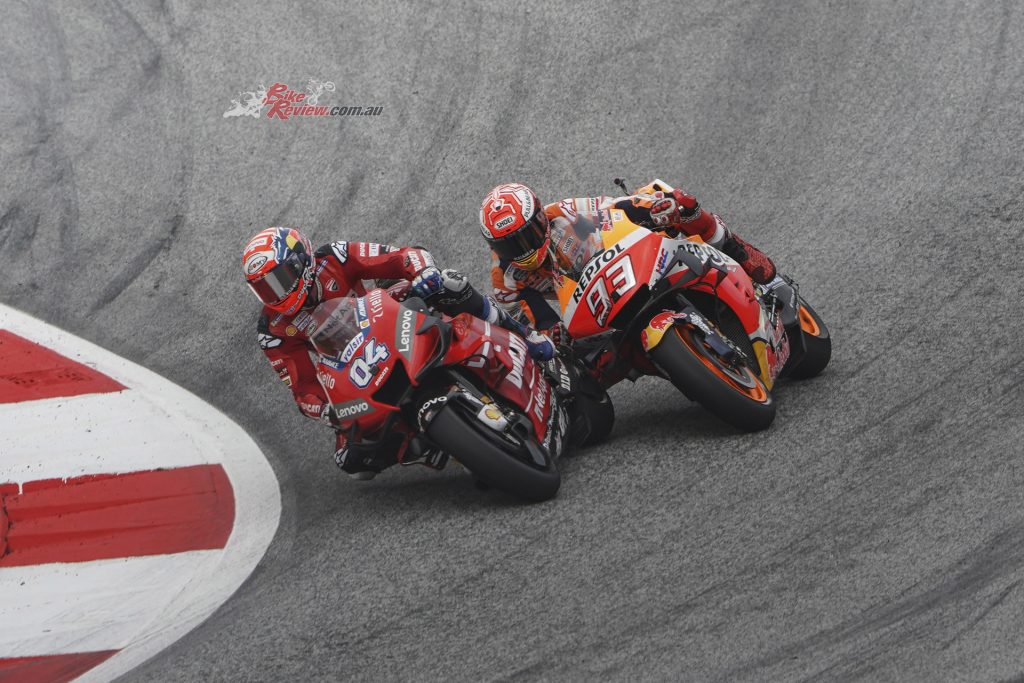 Cal Crutchlow (LCR Honda Castrol), meanwhile, crashed out of contention on Lap 2 at Turn 3, the British rider hitting the back of Tito Rabat’s Reale Avinita Racing Ducati after the Spaniard had to take avoiding action after a problem for Pol Espargaro’s (Red Bull KTM Factory Racing) bike.

Andrea Dovizioso: “I think this is my best victory, for many reasons…we didn’t have Marc’s speed, we had to make a good strategy, we had to fight aggressively in the first few laps and the last four…and we’re struggling a lot to fight for the Championship so this gives us a lot of energy for the future. And the work in the practice paid off in the race because at the end I had more grip, giving me the possibility to fight until the last corner.

“To win in this battle at the last corner in the opposite way to normal is so exciting, so nice…and when you have your friends there after the first corner, seeing them go crazy, screaming, it’s so nice!”