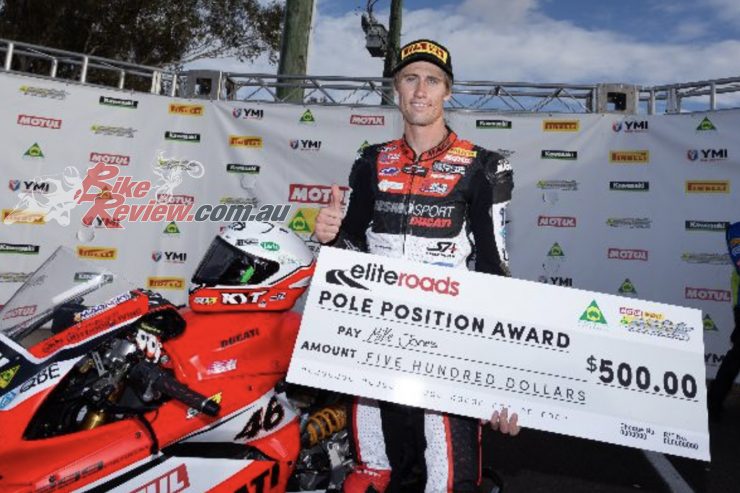 Queenslander ‘Mad’ Mike Jones (Ducati Panagale FE) has claimed the Elite Roads Pole Position Award for Desmosport Ducati in a superb performance in Qualifying for Round 4 of the 2019 Motul Pirelli Australian Superbike Championship this weekend (July 5-7). Jones’ pole time of 1:12.609 was quicker than the previous qualifying record set in 2018 by the man he replaced at Desmosport Ducati, Aussie Superbike legend Troy Bayliss. Report: MA Pics: TGB 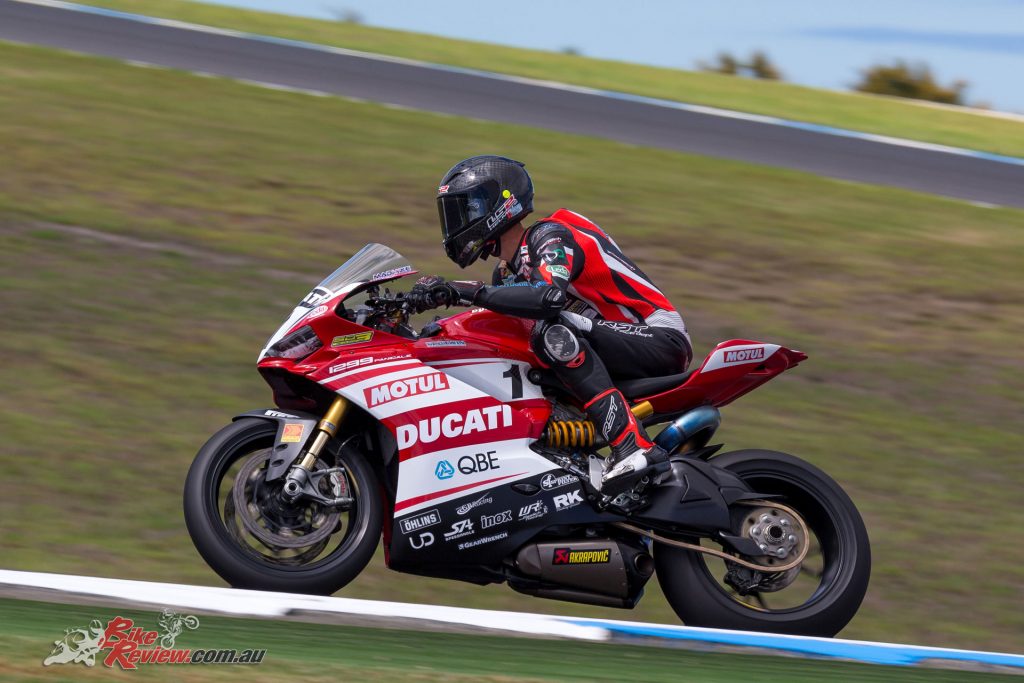 “Absolutely ecstatic with pole position here at my home round” said an elated Jones after qualifying.” It’s really important at a track like Morgan Park to get away from the front of the field, so it’s just perfect” he said. To take an extra point for the championship as well is a good bonus, so I’m very happy and can’t be more thankful to the team for their efforts.”

Jones was first to break through the 1:13s mark early in the session, a 1:12.958 putting the local on provisional pole position early. Jones went faster again with 1 12.922 with 2 minutes to go, then a further 1:12.609 to beat Bayliss’ previous qualifying record and seal the deal. 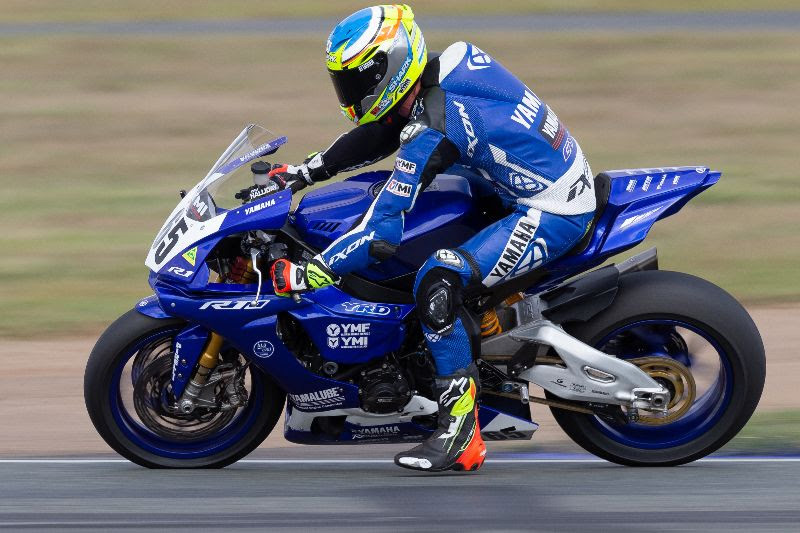 Yamaha’s Cru Halliday (Yamaha Racing Team, Yamaha YZF R1) saved his run until late in the second session, clocking his best of 1:12.855 to secure his berth alongside Jones on the front row. Wayne Maxwell (Team Suzuki ECSTAR Australia, Suzuki GSX-R) consolidated his pace in yesterday’s practice session, completing the front row of the grid with a 1:13.046. 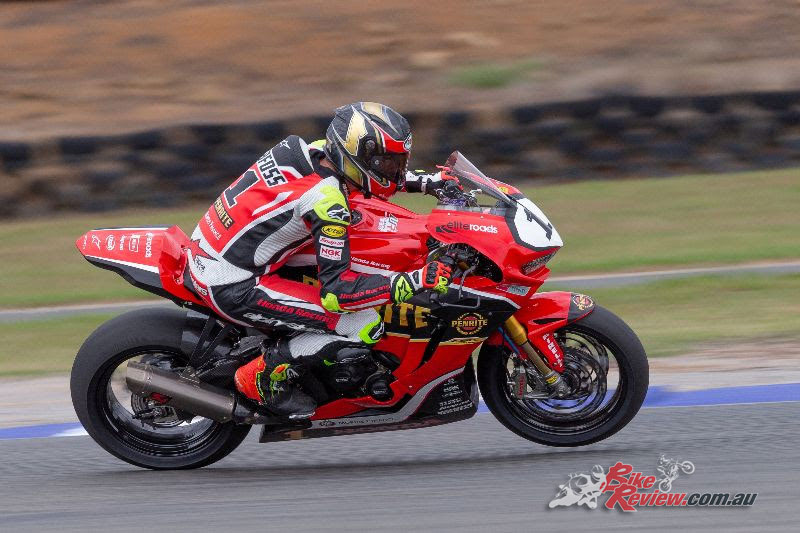 Penrite Honda’s Troy Herfoss (Honda CBR SP) did not exit the pitlane in the second session until the closing minutes, his time of 1:13.127 securing him a spot on the second row ahead of championship leader Bryan Staring (Kawasaki BCperformance, Kawasaki ZX10RR, 1:13.377) and Daniel Falzon (Yamaha Racing Team, Yamaha YZF R1, 1:13.390).

“It was really unexpected, to be honest I wanted to get in the top three positions so to get pole position… I’m super happy, couldn’t do it without the team, it’s an awesome start to the weekend” Liminton said. 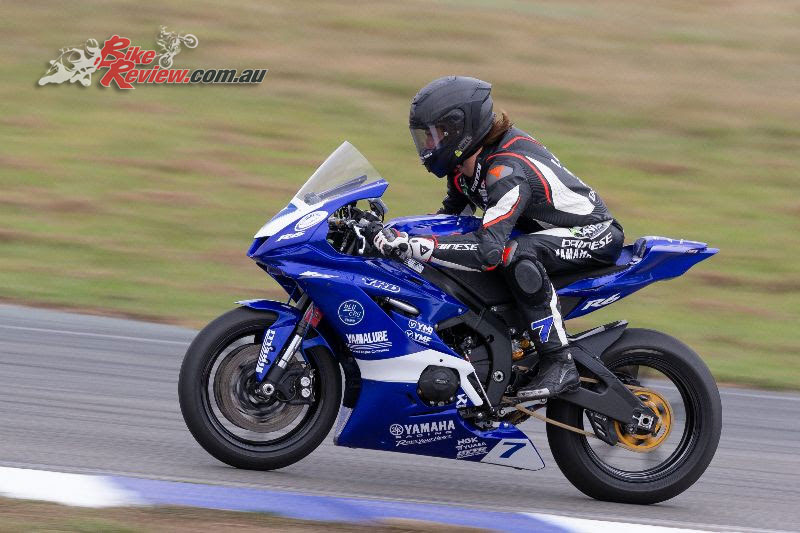 Toparis’ 1:15.406 was fastest in the morning’s first Qualifying session, but he couldn’t lower the mark any further in the second session, leaving Liminton to claim the fastest time of the day. Callum Spriggs (Allsite Concrete Cutting, Yamaha YZF R6) will start on the inside of the second row after setting a 1:15.756. Oli Bayliss (Cube Racing, Yamaha YZF R6) set his 1:15.800 on his spare bike after he crashed at Turn 6 in the first session. Queenslander Corey Turner (52Motorsports, Honda CBR600, 1:16.019) rounded out the top six.

YMI Supersport 300
After receiving the AGV Veloce Award in qualifying, Agius began Race 1 on pole position, with John Lytras (Caboolture Yamaha, Yamaha YZF R3) and Levy completing the front row. Agius led the field off the start, pulling out a two-tenth lead ahead of Lytras in the opening two laps, with Hunter Ford (YRD, Yamaha YZF R3) almost two seconds back. Championship leader Max Stauffer (YRD, Yamaha YZF R3) sat almost three seconds off the lead in fourth. Uncharacteristically for a YMI Supersport 300 race, the field spread itself out, with Agius maintaining control of the race at the front over Lytras and Ford. Harry Khouri (Excite M-sports, Yamaha YZF R3) was fourth, with Levy fifth and Stauffer sixth. Brandon Demmery (Rustic Flooring, Yamaha YZF R3) passed Stauffer to make his way back into the top six after starting the race fourth.
As the laps wound down it was Agius in front, followed by Lytras and Ford four and seven seconds back respectively. A gaggle of other bikes followed, with the next five riders starting to close in on each other as they battled for the minor placings.
Crossing the line more than five seconds up on the field was Agius, followed by Lytras, Khouri, Ford, Stauffer and Levy.

YMF R3 Cup
Lytras started from the front row beside Ford and Stauffer, and as the field got away that ‘s how they stayed with Khouri and Levy following close behind. Locky Taylor (Yamaha Australia, Yamaha YZF R3) passed Levy for fifth before the end of the first lap, and as the field sorted themselves out it was Lytras, Ford, Stauffer, Khouri, Taylor, and Demmery the top six.
By half distance you could throw a blanket over the top five competitors, who were less than a second apart.  Demmery had forced Taylor out of the top five and Harrison Voight (Waltec Motorsport, Yamaha YZF R3) was coming to join the party at the front of the field in sixth.
The top six then expanded to a top eight, and with two laps to go it was Ford, Khouri, Lytras, Demmery, Levy, Stauffer, Voight and Taylor making up the lead train, the rest eight seconds further back. As they crossed the line to take the chequered flag, Levy pulled out of Lytras’ slipstream at the last nanosecond to steal victory by 0.014sec, ahead of Ford, Demmery, Khouri and Voight.

Oceania Junior Cup
Jacob Roulstone (bLU cRU, Yamaha YZF R15) has claimed victory in Race 1 of Round 3 of the 2019 bLU cRU Oceania Junior Cup at Morgan Park Raceway in Queensland, Australia, held as part of Round 4 of the Motul Pirelli Australian Superbike Championship (July 5-7).
Roulstone finished 0.4 seconds ahead of second-placed Angus Grenfell, with Queensland local Glenn Nelson in third. “It was a very difficult race,” said Roulstone on the podium. ” A lot of passing and battling!
“I was just waiting until the last lap board, trying to be tactical and then try to be leading out of the last turn” he said.