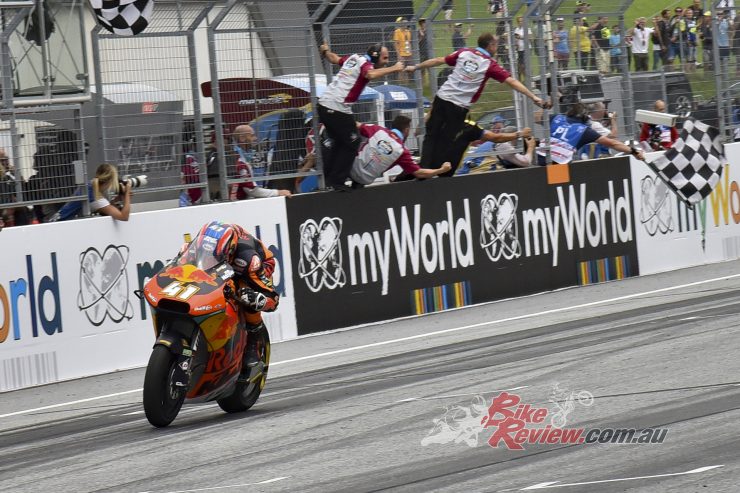 Binder wins for KTM in Austria, Remy crashes out of lead battle.

Red Bull KTM Ajo’s Brad Binder battled to his first Moto2™ win of 2019 in the myWorld Motorrad Grand Prix von Österreich, getting the job done in style on home turf for both KTM and team sponsor Red Bull…and on his birthday no less. The South African held off a hard-charging Alex Marquez (EG 0,0 Marc VDS) as the Championship leader sliced through from P11 on the grid, with Jorge Navarro (Beta Tools Speed Up) completing the podium. 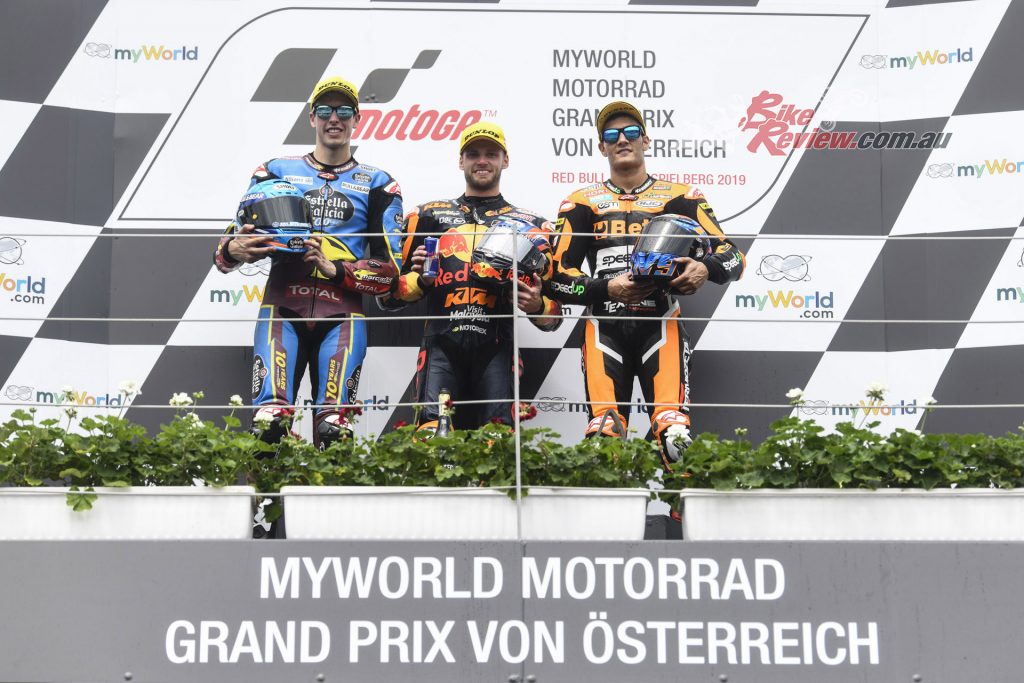 Binder took the holeshot from second on the grid and quickly began to bolt and break clear, settling into an early lead of just under a second. Behind, poleman Tetsuta Nagashima (ONEXOX TKKR SAG Team) dropped down slightly into third behind Xavi Vierge (Marc VDS EG 0,0), who made a great start from the third row, before the Japanese rider then hit back for second. The first bout of drama then hit as Vierge tried to retaliate into Turn 3 but went down, collecting Nagashima to make it an early heartbreaker for the polesitter.

That left an almighty scrap for second place and by Lap 8 it was heating up. Luca Marini (Sky Racing Team VR46), Tom Lüthi (Dynavolt Intact GP), Enea Bastianini (Italtrans Racing Team) and Remy Gardner (ONEXOX TKKR SAG Team) were battling it out like a last lap showdown and it was the Australian who was able to emerge ahead, then setting after Binder and closing him down.

Gardner’s first attempt to grab the lead failed after he ran wide at Turn 1, the Australian then trying again but again running wide. With seven to go Gardner again got his front wheel in front, but Binder forced him the long way round into Turn 3, with the inside line seeing Binder hold on.

Meanwhile, Bastianini and Marquez were closing in and Gardner ran wide for a third time at Turn 1. This time, as he rejoined, the Aussie clipped the rear wheel of Marquez and crashed out as Marini managed to tag onto the back of the fight at the front. Sadly for the Italian, he also went down not long after…collecting compatriot Bastianini and leaving a duel for the win out front. 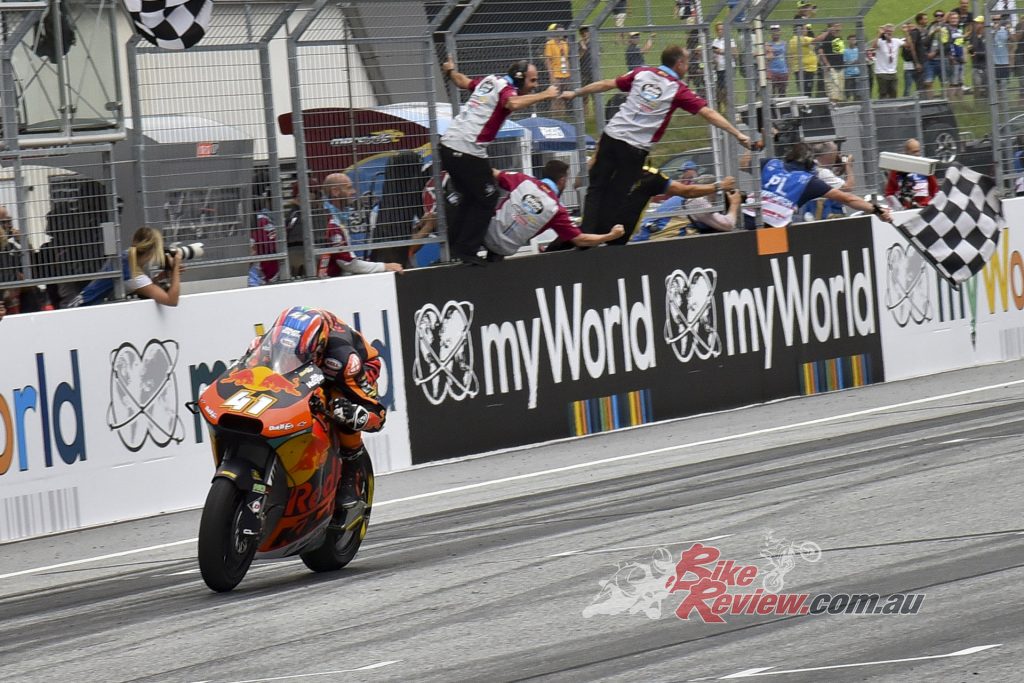 It came down to Binder vs Marquez and the Championship leader pushed the South African to the limit, shadowing him round a close final lap. But Binder held firm, taking his first win of the season on a perfect day for it. Marquez took second but extended his Championship leader out to beyond 40 points, with Navarro putting in another solid ride to complete the podium in third having avoided the carnage.

FlexBox HP 40 teammates Lorenzo Baldassarri and Augusto Fernandez came home fourth and fifth respectively, with second in the Championship Tom Lüthi (Dynavolt Intact GP) having a tough day at the races in sixth.

Red Bull KTM Ajo’s Jorge Martin created more home glory at the Red Bull Ring after he took his best rookie result yet in seventh, a quarter of a second ahead of American Racing KTM’s Iker Lecuona. Rounding out the top ten were Marcel Schrötter (Dynavolt Intact GP) after a solid comeback from P16 on the grid for the German, and Mattia Pasini (Tasca Racing Scuderia Moto2) who started P15.

Brad Binder: “Today has been an incredible day, I knew we had decent pace, I didn’t know if we could win or not but I knew we could give it a good try. To get the job done in front of all the fans of KTM and Red Bull is an insane feeling, I’ve never seen so much orange in my life! I’m super happy, a huge thank you to Red Bull, KTM and my team…they’ve worked incredibly hard and we’ve tried so many different thing this year…it was good to finally give them a good result.”