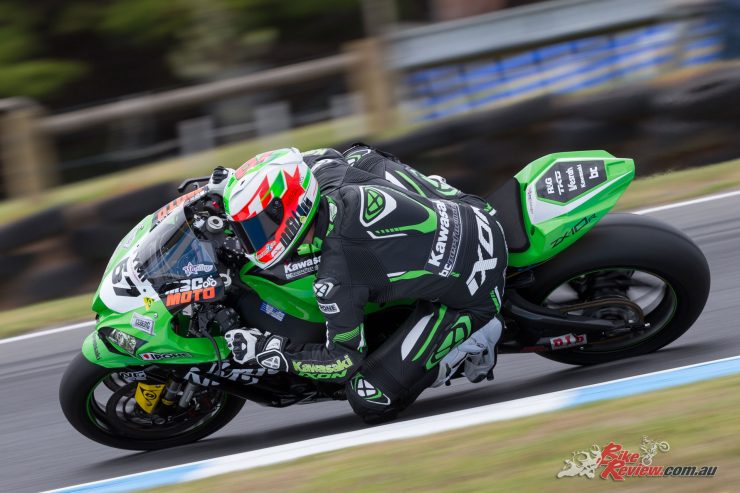 Bryan Staring (Kawasaki BCPerformance, ZX10R) has turned Round 1 of the Australian Superbike Championship on its head, taking out the overall victory after a stellar ride from 13th on the grid to win Race Three of the YMI Superbike class. 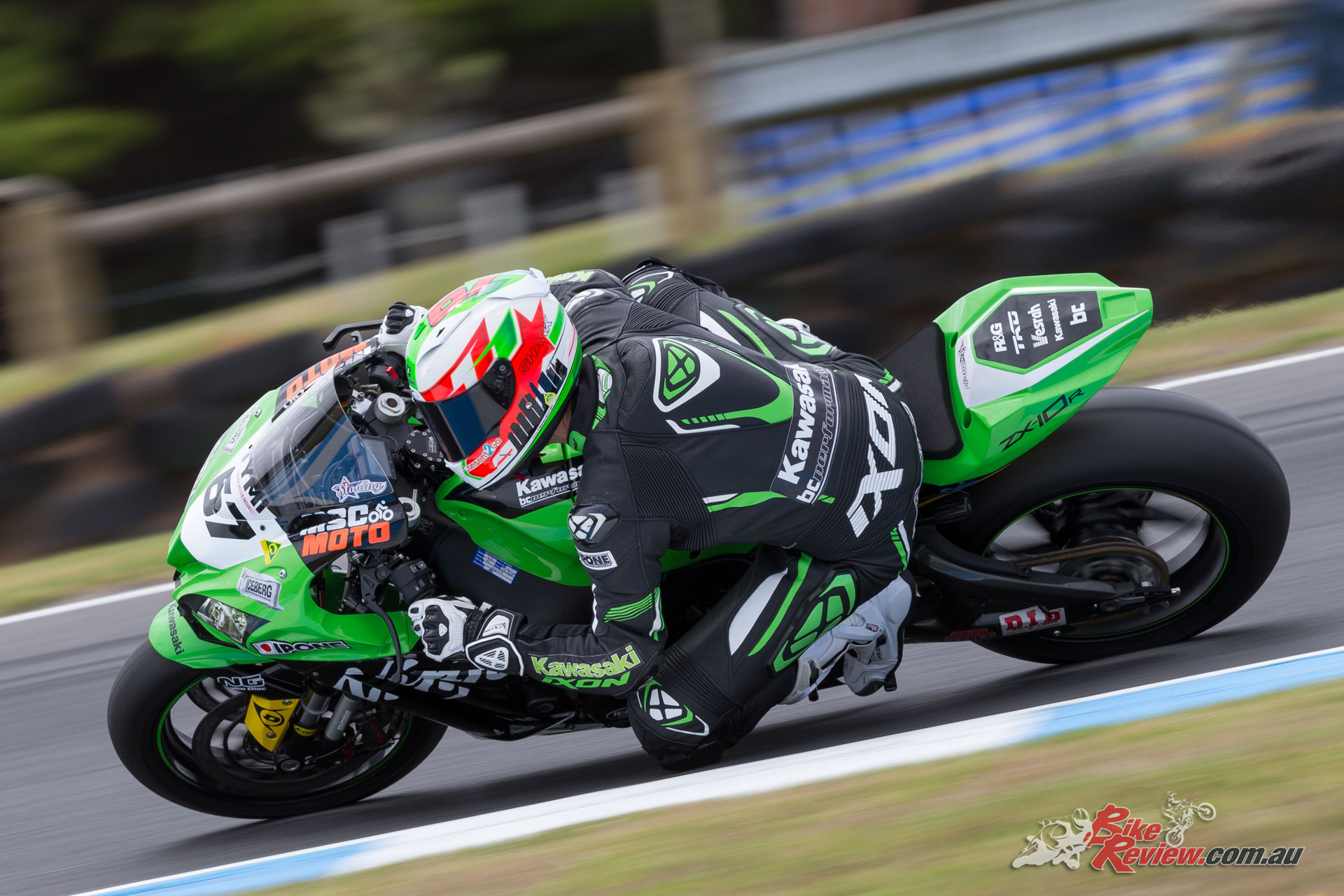 Race One winner Troy Herfoss (Penrite Honda, CBR1000SP) rounded out the podium and sits level on points with Waters, leaving the pair one point a drift of Staring.

After yesterday’s dramatic race which saw Herfoss climb to the top step of the podium, Maxwell put a difficult Saturday behind him to take a well-deserved win for his Yamaha Racing Team outfit.

In the early stages of the race it looked like Waters was going to make a break for it, with Troy Bayliss (Desmosport Ducati, Ducati Panigale R FE) and Maxwell in tow. It didn’t take long however for Maxwell to blast past Bayliss and begin his charge against Waters in front.

On lap five, Maxwell made his move and took control of the race. Waters was always within relative striking distance thereafter, but could quite never quite get close enough to pull off an overtaking maneuver.

As Maxwell and Waters checked out at the front, an epic battle was on for the final spot on the podium between Bayliss, Daniel Falzon (Yamaha Racing Team, YZF-R1M), Troy Herfoss (Penrite Honda, Honda CBR1000RRSP) and Staring. By lap seven, Staring was on fire, passing all three of his rivals in short succession. 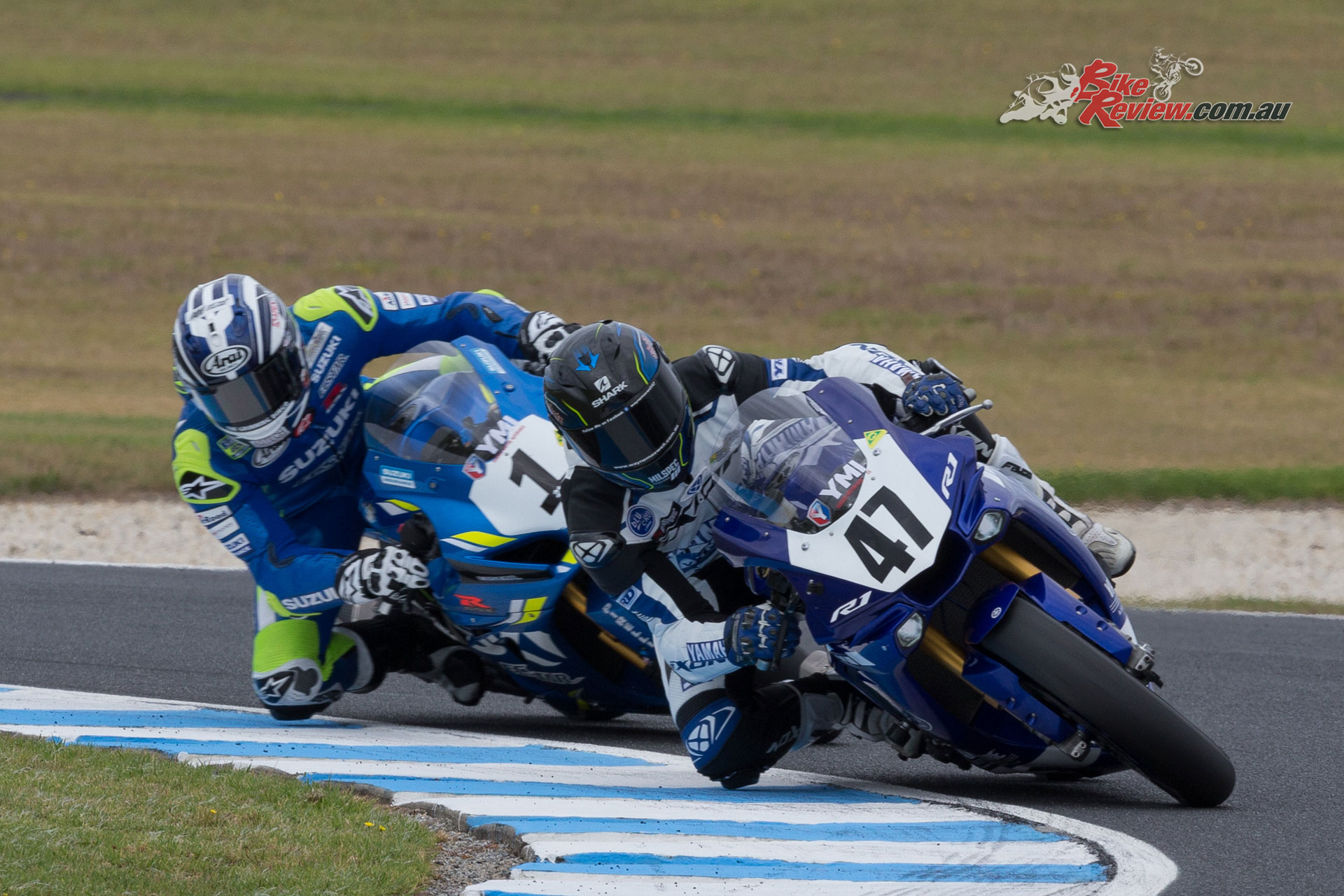 Maxwell and Waters battle it out – Image by TBG Sport

On the final lap, Maxwell took victory by .935s, Waters unable to make a move on the Yamaha rider. The relief was evident for Maxwell after retiring from yesterday’s Race One.

The highlight of the race had to be the battle for third, which went to Staring who pulled off plenty of masterful overtakes, coming all the way from 13th of the grid.

Blair was outstanding on his privateer Yamaha, taking 7th after battling with Walters (8th) and Allerton (9th).

Winner Maxwell stating; “Massive credit to Yamaha Racing Team, Josh has always been dominant here in the past so it’s a relief to get the win. My left ankle is still in pain after the crash yesterday, so it makes it difficult to change gear. Hopefully it will feel better for Race Three!”

The master overtaker Staring stating after the race; “Huge thanks to the Kawasaki BCperformance team, the ZX-10R just has so much horsepower. We were able to make up so much time and our ability to pass on the straight allowed us to make up so many places. Qualifying was a disaster so I’m very happy with our performance.”

The YMI Superbike class had another action-packed affair won by Kawasaki BCperformance newcomer, Staring. After a tough last year, Staring has been sensational all weekend long at Phillip Island, coming from 13th on the grid to a race victory. Staring’s Kawasaki machine was an absolute demon down the main straight, which assisted him to overtake his way to victory.

The highlight of the race a massive battle between Waters, Maxwell, Bayliss, Falzon, Staring and Herfoss in a group. Lap eight was when the Kawasaki rider, Staring made his move and gained the lead, after this he didn’t look back on his way to the checkered flag. Maxwell and Waters both attempted to pass Staring, but could not get past the sheer grunt of the ZX-10R recording 297 km/ph down Gardner straight. 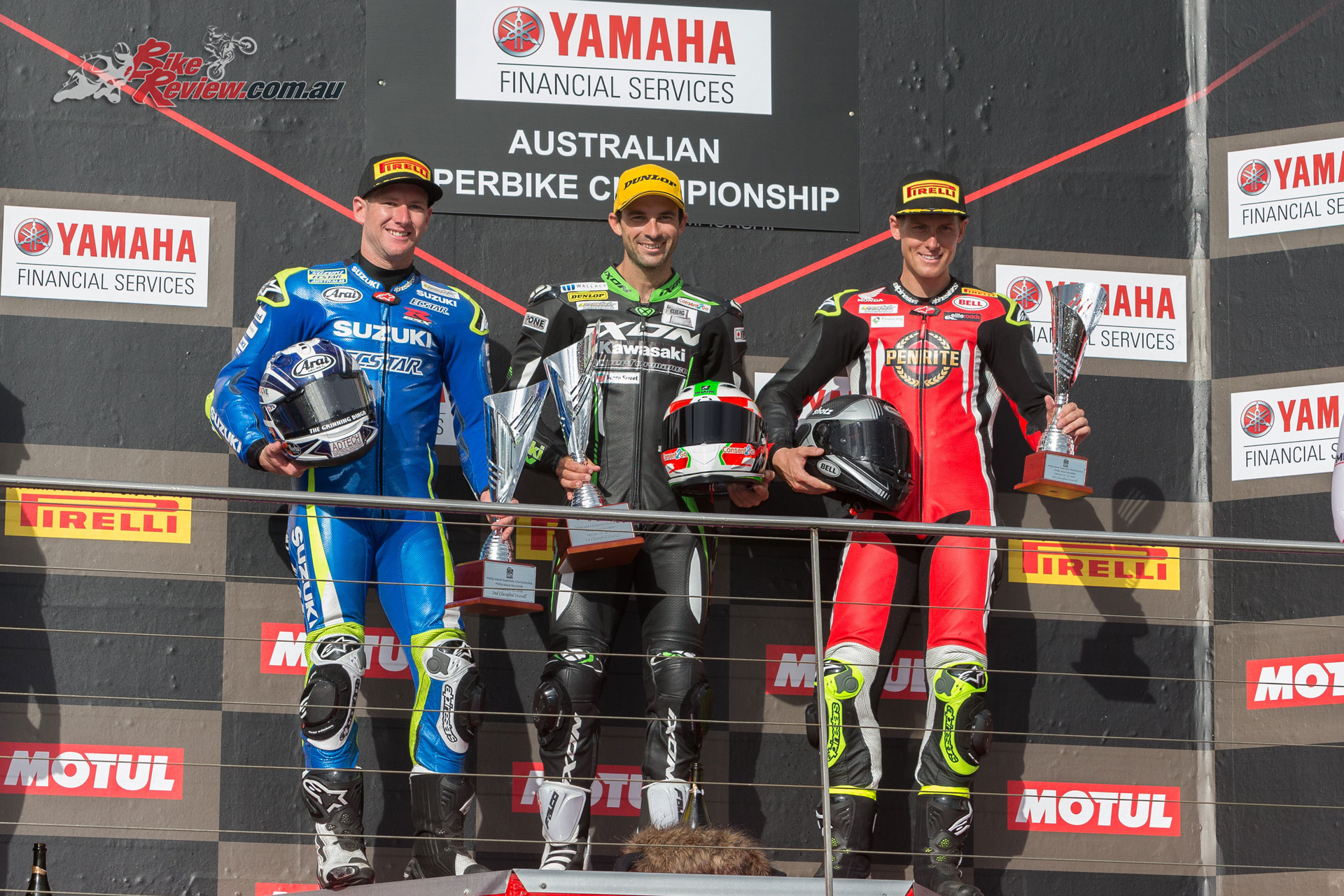 Staring tops the overall podium, ahead of Waters and Herfoss – Image by TBG Sport

BCperformance Team Manager, Kelvin Reilly watched on as Staring and Waters had a drag race down Gardner straight to the finish line and this time Staring reigned supreme by only 0.19s. Filling the race podium alongside him was Waters and Maxwell.

Coming fourth was Herfoss, fifth Falzon, and the top nine was completed by Bayliss, Blair, Allerton and Walters.

Overall Staring came away with the Round 1 victory, leading the ASBK championship with 60 points, followed by Waters and Herfoss, both with 59 points. It’s all set up for another cracking YMI Superbike Championship in 2018!

Staring sharing; “I just knew I was getting murdered in several areas of the track in the last race. If we improved the bike in key areas than I knew we would be very strong. I really enjoyed that race and we’ve won the overall for the weekend. I’m so happy that we were able to recover from that qualifying performance. There’s almost nothing in it between the top competitors and I’m sure that’s the way it’s going to be all year long. Bring on Wakefield!”
2018 ASBK will now head to Wakefield Park in New South Wales for Round 2 on 16-18 March, for a round not to be missed with the racing at a level we have not seen in ages in Australia.

Toparis was simply untouchable, starting all three races from fifth position on the grid, but taking no time to hit the front and gap his competitors. 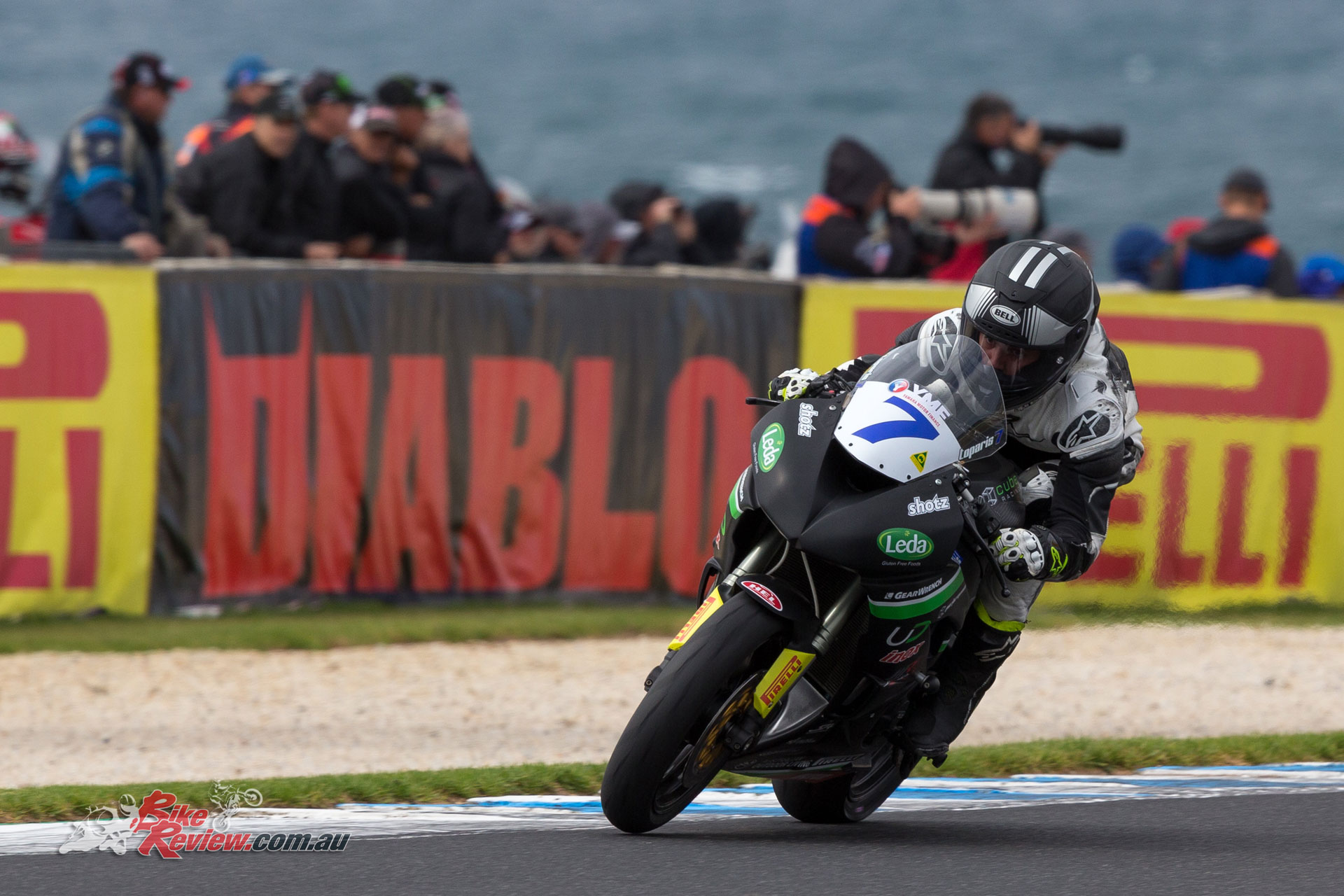 Cru Halliday (Yamaha Racing Team, Yamaha YZF-R6) was consistent in his return to the Supersport class aboard the new Yamaha YZF-R6; grabbing three-second place finishes at a track that has not brought him the best results in the past.

Broc Pearson (Yamaha, YZF-R6) was flying on Friday in qualifying and earned himself pole position for the weekend, and with a tidy weekend, he finished in third position with a lot to look forward to this season.

Toparis has backed up yesterday’s win with a Race Two victory in the Australian Supersport Class at Phillip Island Grand Prix Circuit for Round 1 of the Yamaha Motor Finance Australian Superbike Championship presented by Motul Pirelli (ASBK). Not even a re-start could throw Toparis off his game as he continued his sensational form.

Toparis and Halliday left the field behind early, gaining a nine second advantage on the paddock by lap four, leaving these two to duke out for the race win. Toparis made a break from Halliday on lap six, to push his lead to five seconds, before claiming the race win by just over six seconds.

Toparis shared; “The race was a bit sketchy for us, the red flag on lap two left us on the grid with no tyre warmers on, which made the first lap of the re-start a real challenge. Really happy to get the win and another 25 points, which is really important for the long run. It’s a good start for us and hope we can take out race three later as well.” 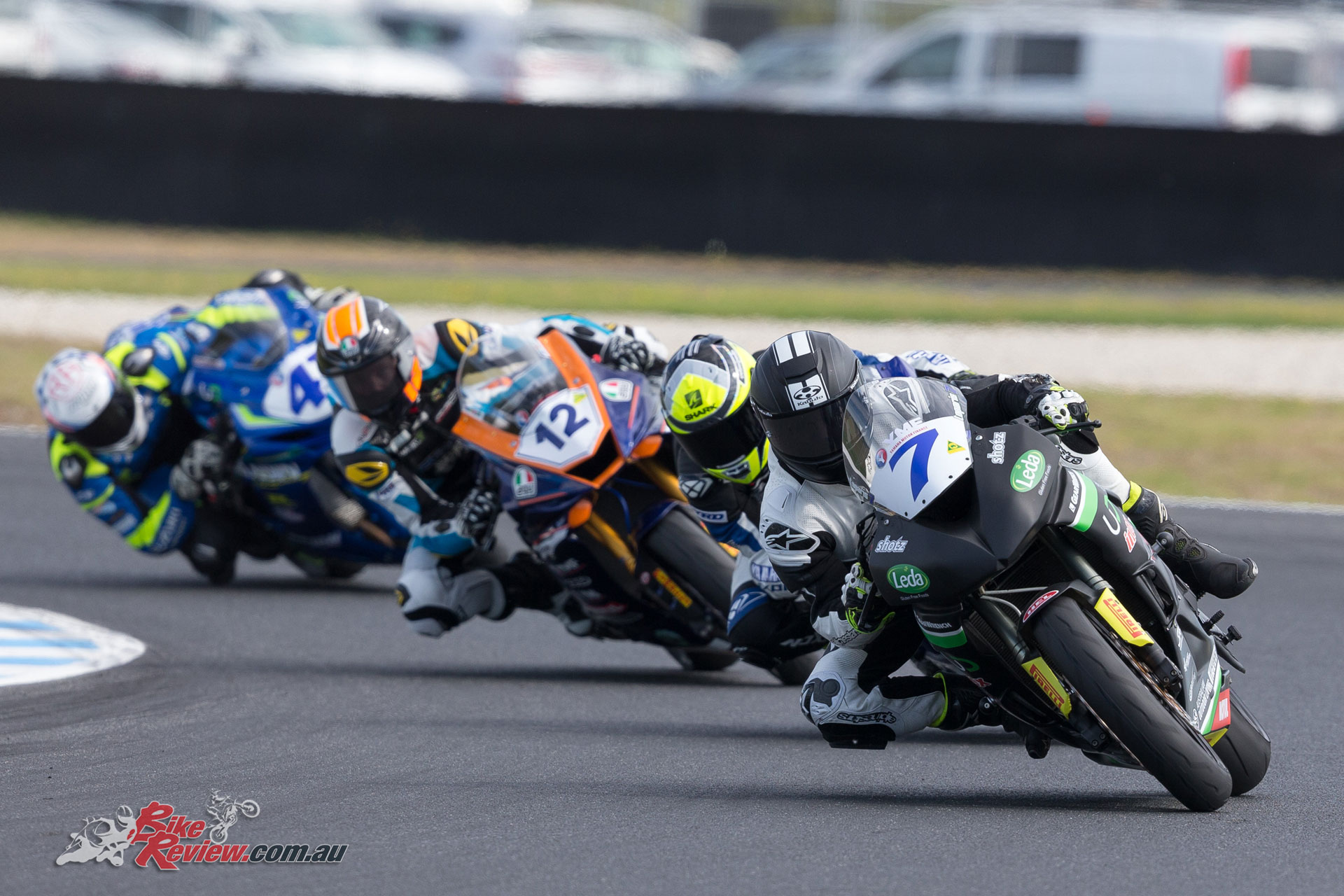 Halliday was upbeat with his second place; “I was happy with that ride, I got second in the first race but I felt better in this race, the guys at Yamaha looked after me so well last night and made such an effort to get the set up right, we will keep improving as the year goes on with new parts becoming available as the season progresses. We will bounce back, I just need to find a bit more pace to catch Toparis, and make a few less mistakes on my end and we will be right up there.”

The battle for third went back and forth throughout the eight-lap race at Phillip Island with Damon Rees (Carl Cox Motorsports, Honda CBR1000RR), Broc Pearson (Yamaha, YZF-R6) and Nic Liminton (Yamaha, YZF-R6) trading places throughout, but Liminton got the better of the group and claimed the last spot on the podium. Pearson grabbed fourth whilst Rees rounded out the top five.

A causality from Race Two was Max Crocker (Mat Mladin, Suzuki GSX-R1000) who had a fall and did not return to the track, disappointing for Crocker who finished on the podium in Race One.

Race three continued the Toparis domination as he completed the perfect weekend with another victory. Coming second was once again Halliday on his Yamaha machine. Halliday also took the fastest lap of the race. Liminton kept up his strong form from Race Two with another third place.

Toparis claimed the victory by 4.667 seconds in front of Halliday, and Liminton 8.703 further seconds back from the first-place getter. Coming in fourth was Zachary Johnson (Bill Lambert MBW, Yamaha YZF-R6). Completing the top five was Broc Pearson (Yamaha YZF-R6). 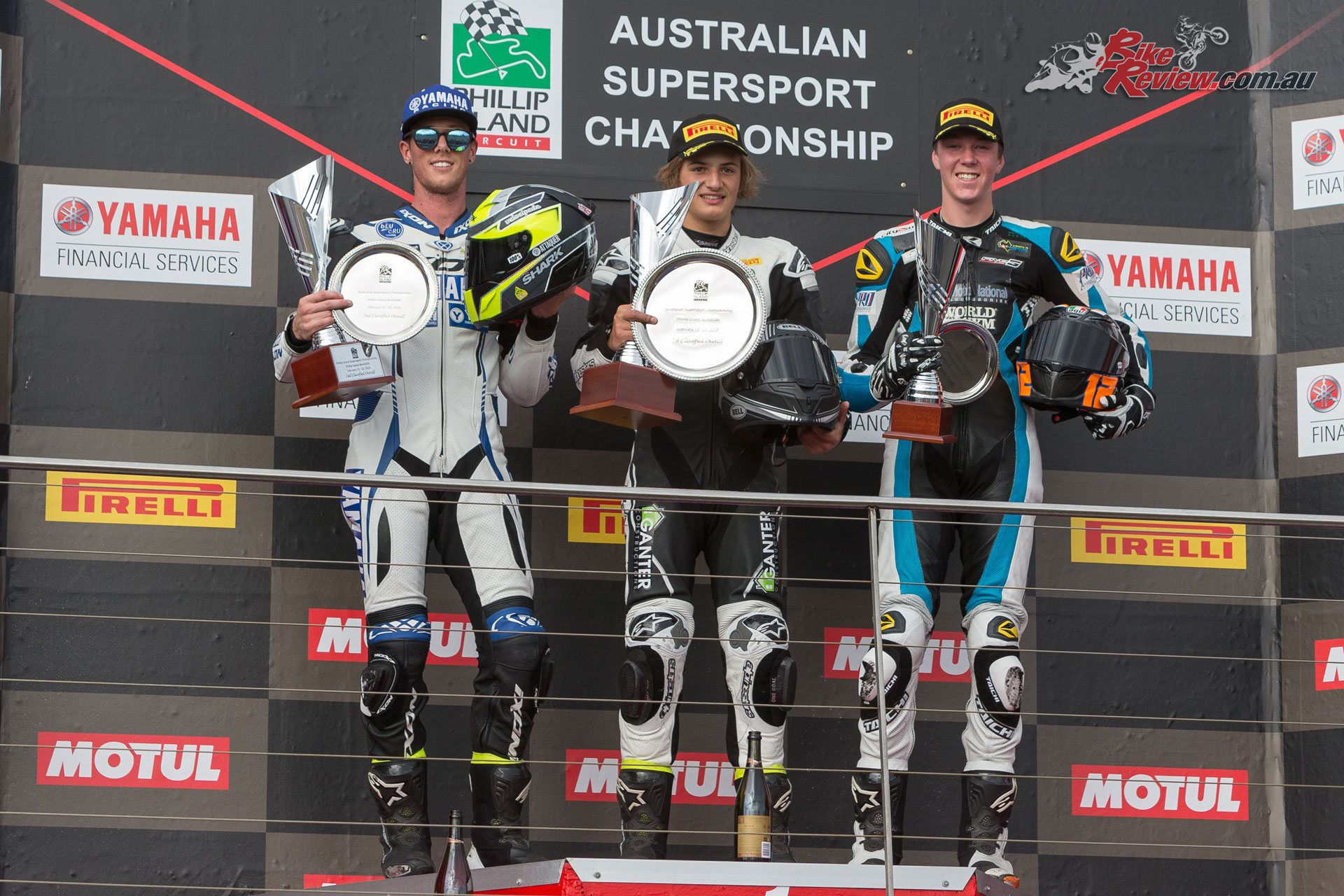 Oli Bayliss On Fire at Phillip Island with Overall Win 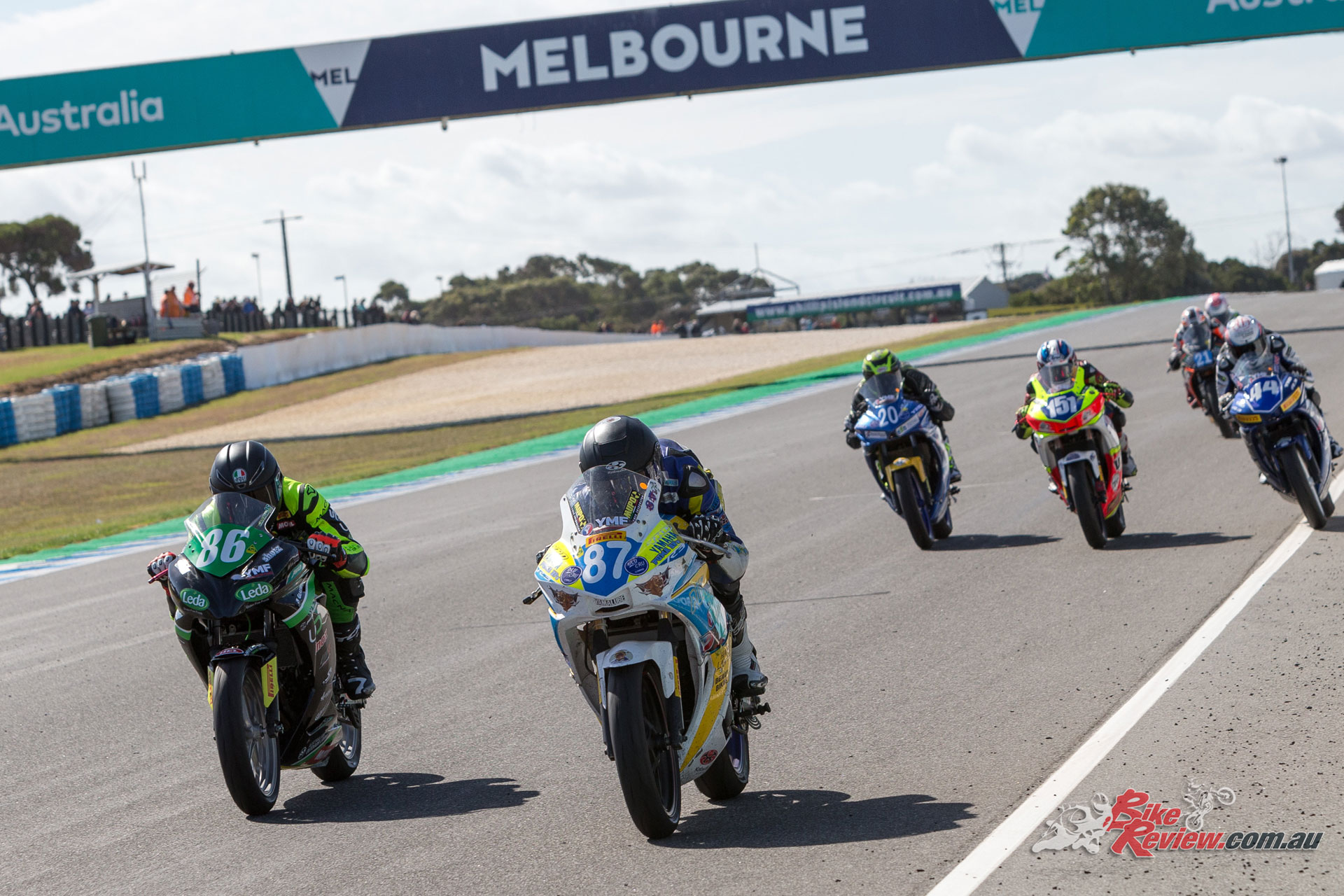 The lead pack only shared a gap of 0.992s from first to sixth, before Bramich made his move and rejoined the pack at lap six. The racing from lap six was a tight affair with Bayliss, Ford, Bramich and Taylor all having the lead at different stages.

The last lap saw Bayliss join the lead group, and make an unbelievable passing move finding space where there really wasn’t any room to snatch the win from Taylor, Bramich and Ford.

Bayliss was thrilled with his weekend; “That was one of the craziest finishes I’ve been involved in, I thought I was to far back to make the move, but I just went for it and it just worked out for me. I was so close to hitting the two bikes next to me but to make the pass I was so happy, it worked out perfectly. I’ve been working on my slip stream and studied it and it just came off.”

After leading at many different stages of the race Ford settled for fourth whilst Levy was just behind him in fifth and Khouri managed sixth with only .306s separated these riders from winner Bayliss. 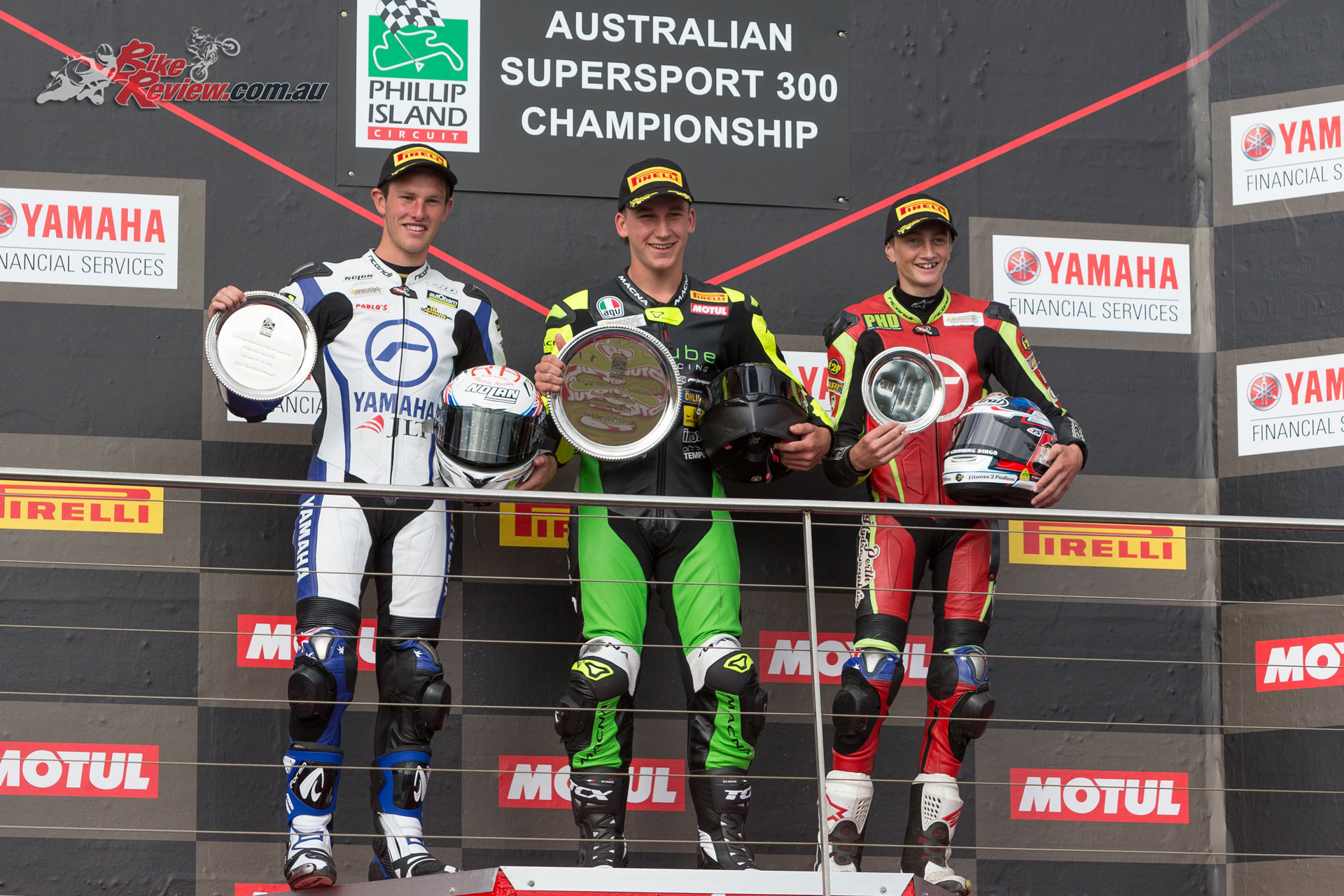 Bayliss took the overall Supersport 300 win, ahead of Bramich and Taylor – Image by TBG Sport

Bayliss leaves Phillip Island as the points leader in the Australian Supersport 300 class with 70 points, ten points clear of Bramich on 60 points and Taylor is third overall with 55 points.

The final Round 1 race for the YMF R3 Cup took place this morning , and it delivered action aplenty as Zac Levy (Puma RV’S, Yamaha YZF-R3) took a strategic victory.

Levy waiting until the final lap to attack for the win. The YMF R3 Cup is the development ground for many future road racing stars, all riding Yamaha YZF-R3 machinery. 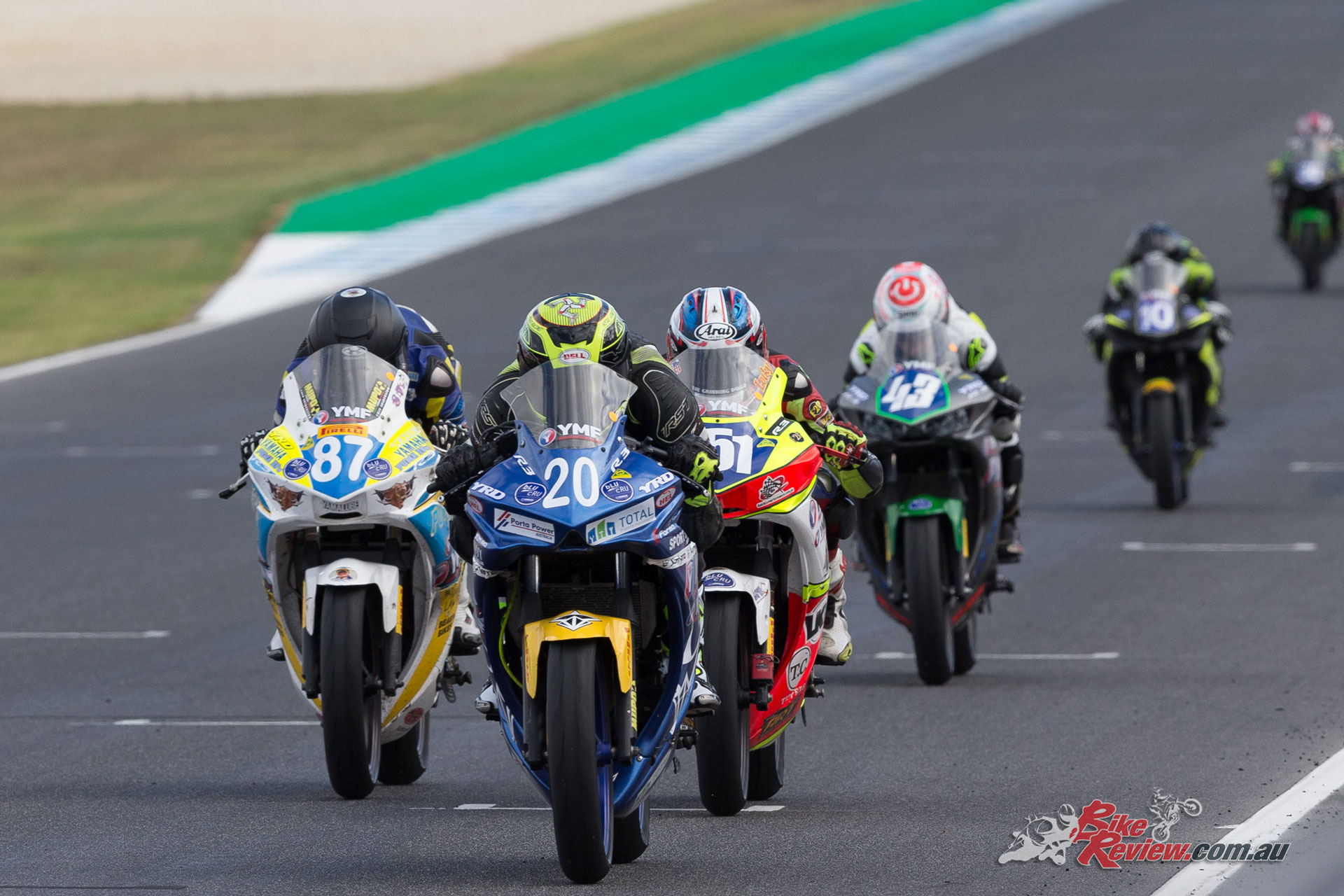 On the last lap Levy managed to pull off a daring overtake for the win ahead of Bramich and Taylor, Khouri and Ford not far behind. Only .345s covered the top five at the checkered flag.

Zac Levy saying after the race, “It was a difficult one, the wind was very strong and there wasn’t much grip. We’re all in the same boat though and I thought if I could get in front I could try and control the race and take the win. I’m happy to have got the lead on the last lap and controlled it to the line. About lap four or five, I could have passed but I wanted to bide my time and wait till the last lap. I just want to be on the podium every race and be consistent this season.”

Second placed Tom Bramich saying, “Super happy to get the overall round win. We had a goal to score the most points and we knew the racing was going to be close due to the nature of Phillip Island. We couldn’t break away at any point during today’s race and the five of us were exchanging overtakes all the time.” 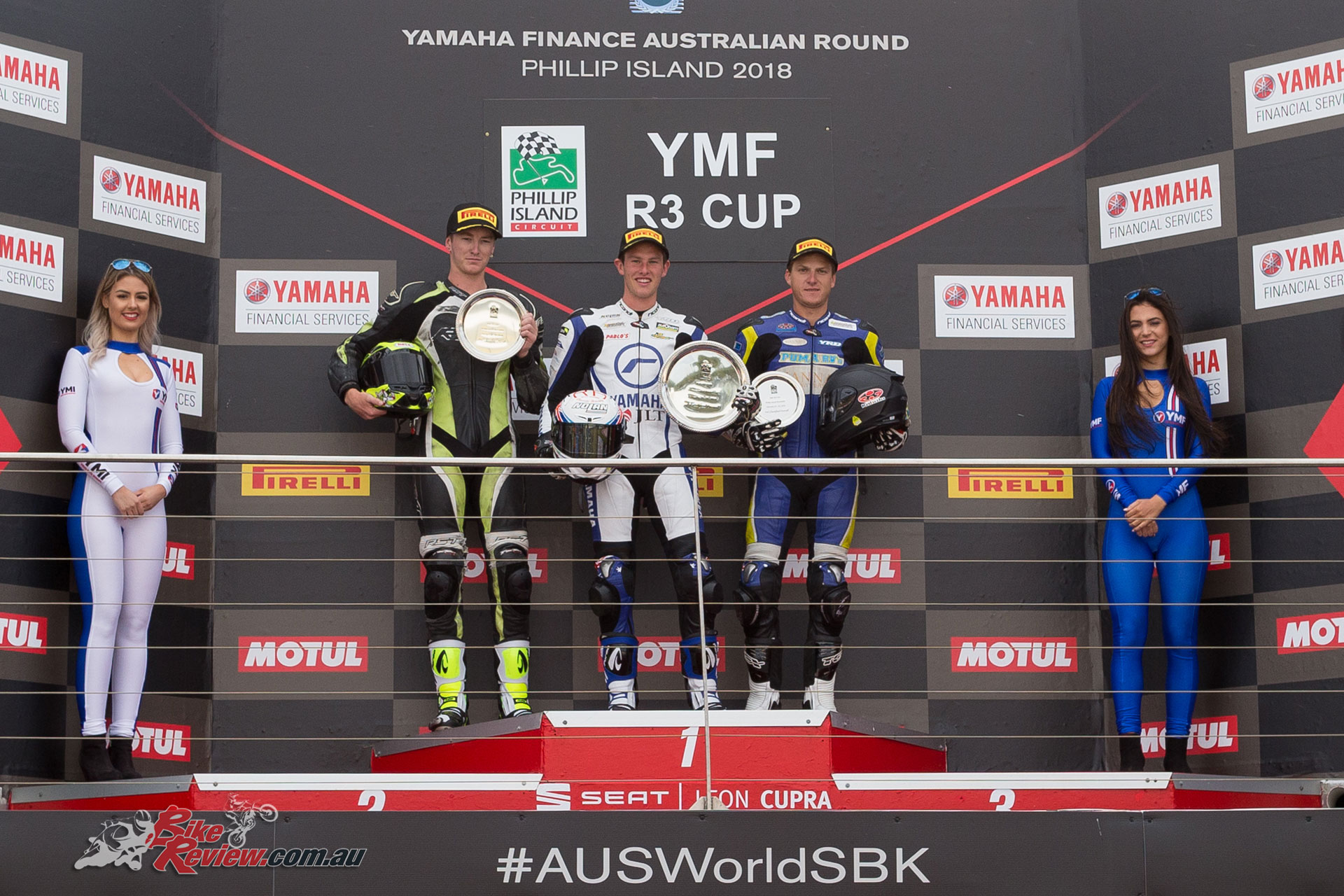 As it stands, the current points tally has Bramich taking the overall round with 65 points, followed by Ford in second with 61 and Levy in third with 57 points.