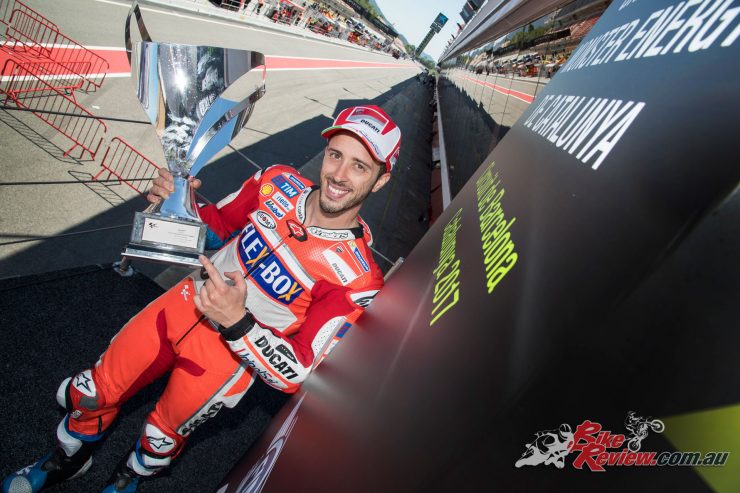 Reigning Champion Marc Marquez (Repsol Honda Team) left a spate of crashes in practice behind in the race to take second, with his teammate – polesitter Dani Pedrosa – completing the rostrum. 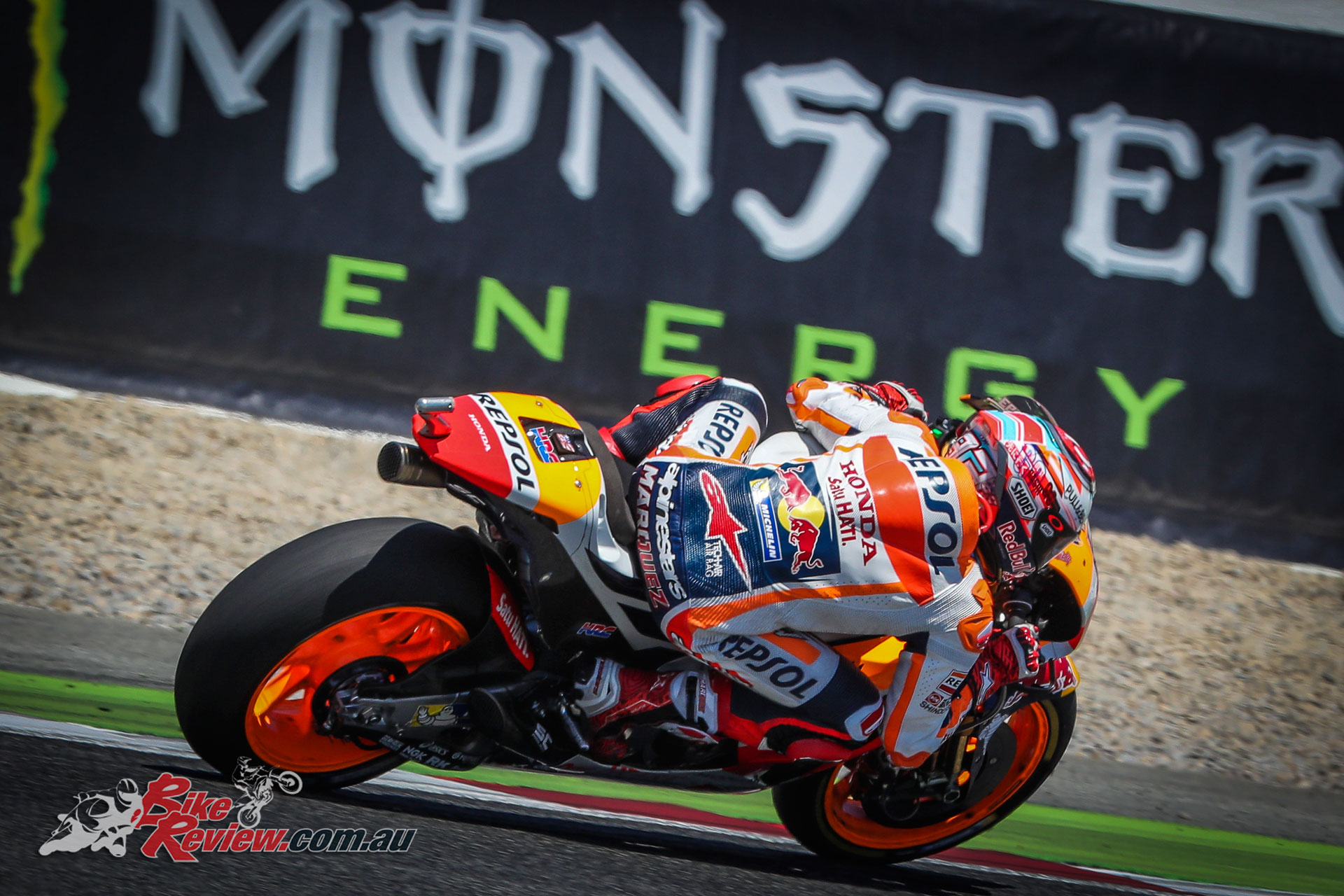 There was drama off the line as Pedrosa got a good start from pole and Jorge Lorenzo (Ducati Team) almost clashed with fellow front row starter Danilo Petrucci (Octo Pramac Racing) – with Petrucci then making contact with Marquez. The Italian dropped back and the reigning Champion pulled clear as Lorenzo attacked for the lead, taking over at the front.

Championship leader Maverick Viñales (Movistar Yamaha MotoGP) found himself heading through the run off area at Turn 1 off the start and dropping back, with the Spaniard then facing a fight back from outside the points after a tough weekend – and teammate Valentino Rossi unable to make big progress from P13 on the grid either. 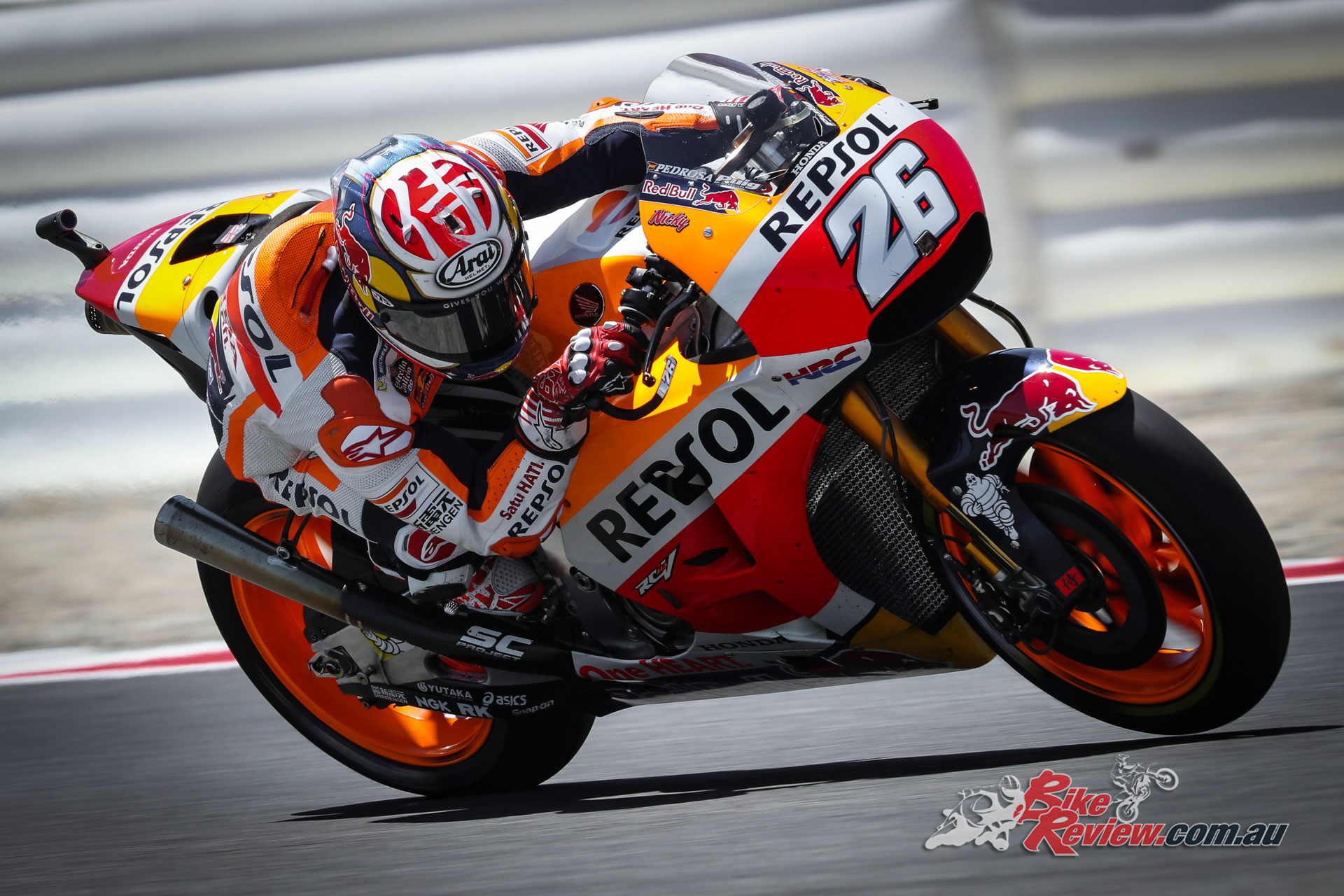 Lorenzo led Marquez and Pedrosa, with Dovizioso on the hunt in fourth and Jonas Folger (Monster Yamaha Tech 3) a big gainer off the line to move up into fifth. Next it was Marquez who struck for the lead, with Pedrosa needing no invitation to follow him through. The ‘Spartan’ then lost out to his teammate ‘DesmoDovi’ as he began to struggle after the lightning start; Folger and Petrucci the next to get through.

‘Baby Samurai’ Pedrosa then chose his moment to attack for P1, able to keep it as Dovizioso struck on Marquez – but the top three couldn’t quite yet begin to pull away from Folger in fourth, or ‘Petrux’ just behind. After a handful of laps playing high-speed chess, Dovizioso then went around the outside of Pedrosa to take the lead – pulling a small gap before Marquez followed the Italian through. 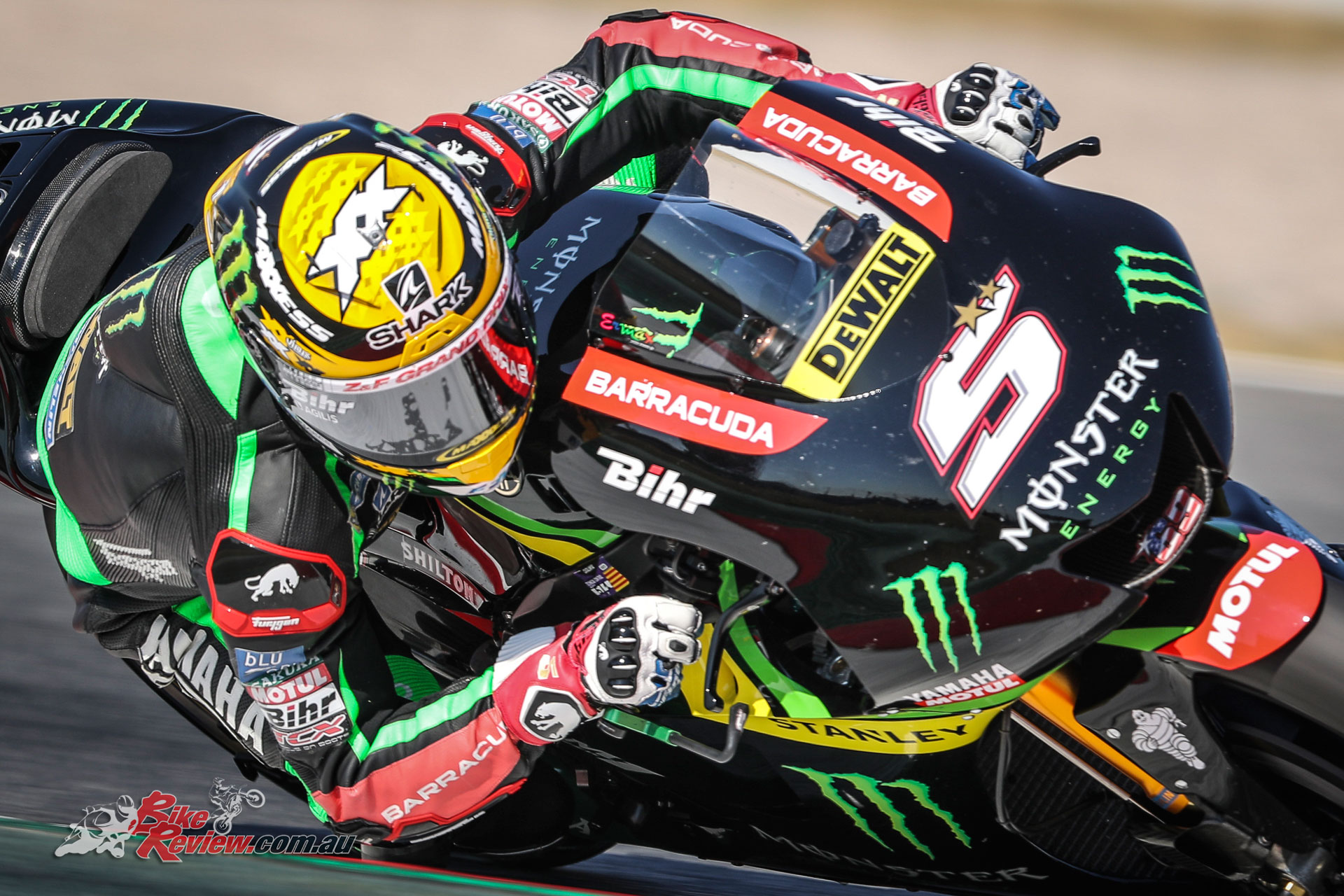 A three-way fight then broke out between Alvaro Bautista (Pull&Bear Aspar Team), Johann Zarco (Monster Yamaha Tech 3) and Lorenzo for P6, with the squabble providing some spectacular wheel-to-wheel action and the Frenchman initially coming out on top. The drama wasn’t over, however, with some running out of rubber and some making big gains as the final laps approached – with Lorenzo on a charge back through and Folger one to fall back.

As ‘DesmoDovi’ arrived at the final lap clear in the lead, it became apparent the dream of Mugello wasn’t something the Italian yet had to wake from – crossing the line for his fourth career win to become the first Ducati rider since Casey Stoner in 2010 to win back-to-back. 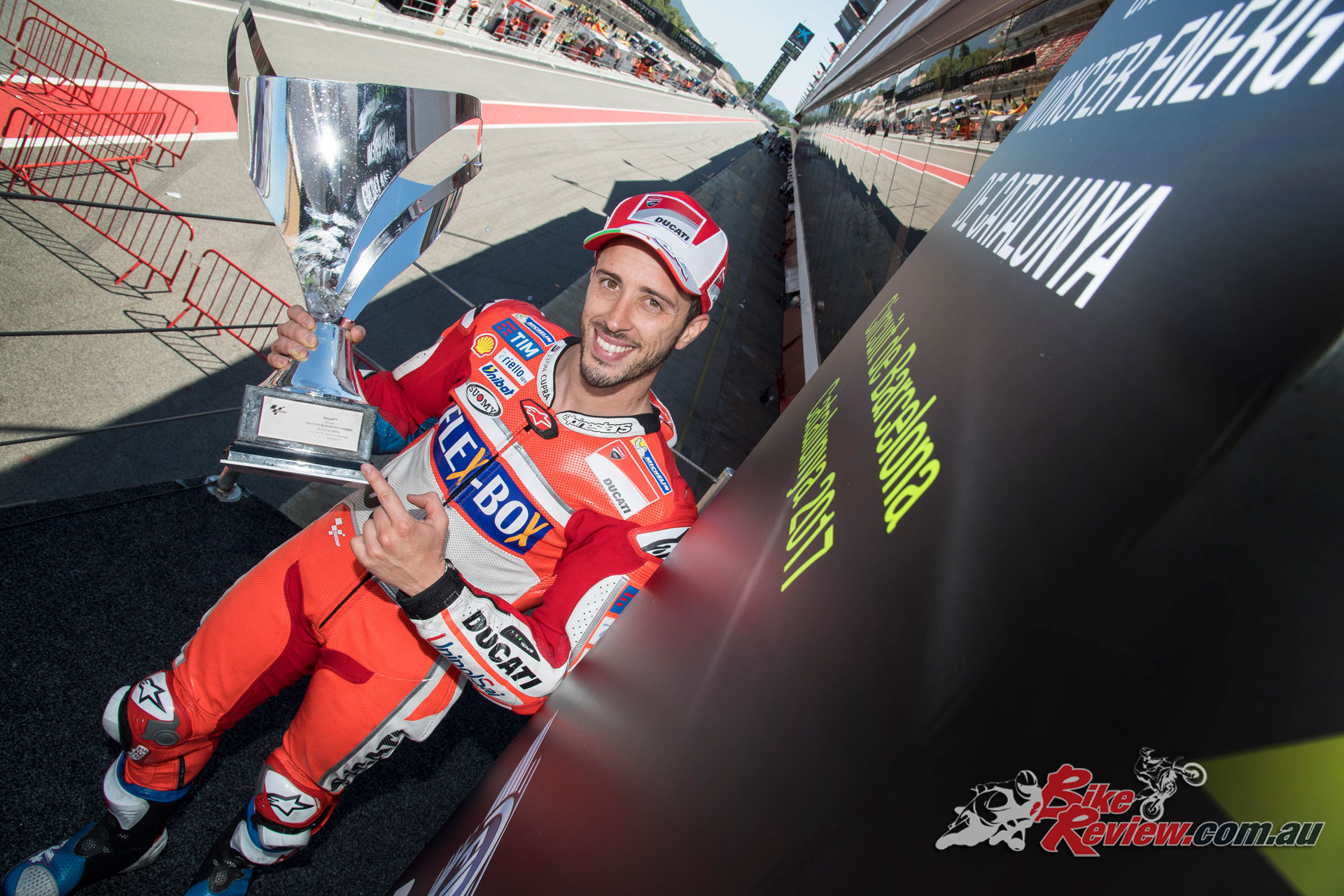 Marquez kept it calm to take second and get back on the podium after a tough Italian GP, with Pedrosa crossing the line in third to join his teammate on the bounce back from Mugello.
Lorenzo sliced back through to take fourth at the flag, ahead of Zarco getting the better of Folger in a last minute duel between the Tech 3 machines. Bautista, after a late run off at Turn 1, came home in P7.

Valentino Rossi came home in eighth after struggling in the latter half of the race, Hector Barbera (Reale Avintia Racing) took P9 in his 250th start in the World Championship, and Maverick Viñales (Movistar Yamaha MotoGP) made it to the flag in tenth – taking a big hit on his points lead in the Championship. 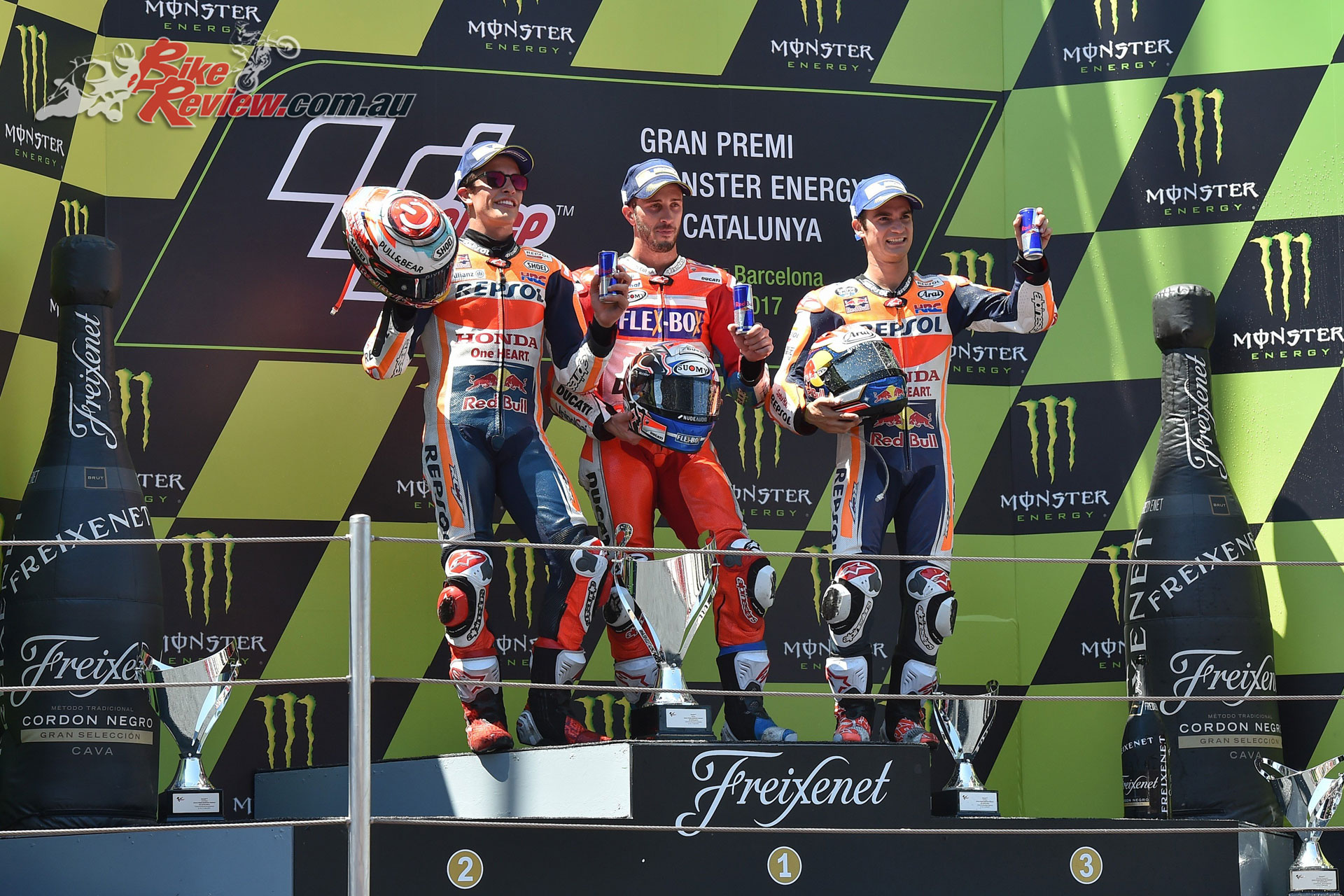 Alex Marquez (EG 0,0 Marc VDS) took a stunning second Moto2 win at his home Catalan GP; the ‘Pistolas’ shooting away from pole position and never seen again. The race was the 250th start for the EG 0,0 Marc VDS outfit, with the 2014 Moto3 World Champion supplying plenty to cheer about for the second time this season.

Mattia Pasini (Italtrans Racing Team) followed up his home heroics and win in Mugello with another podium in second, with Championship challenger Tom Lüthi (CarXpert Interwetten) completing the rostrum in P3. 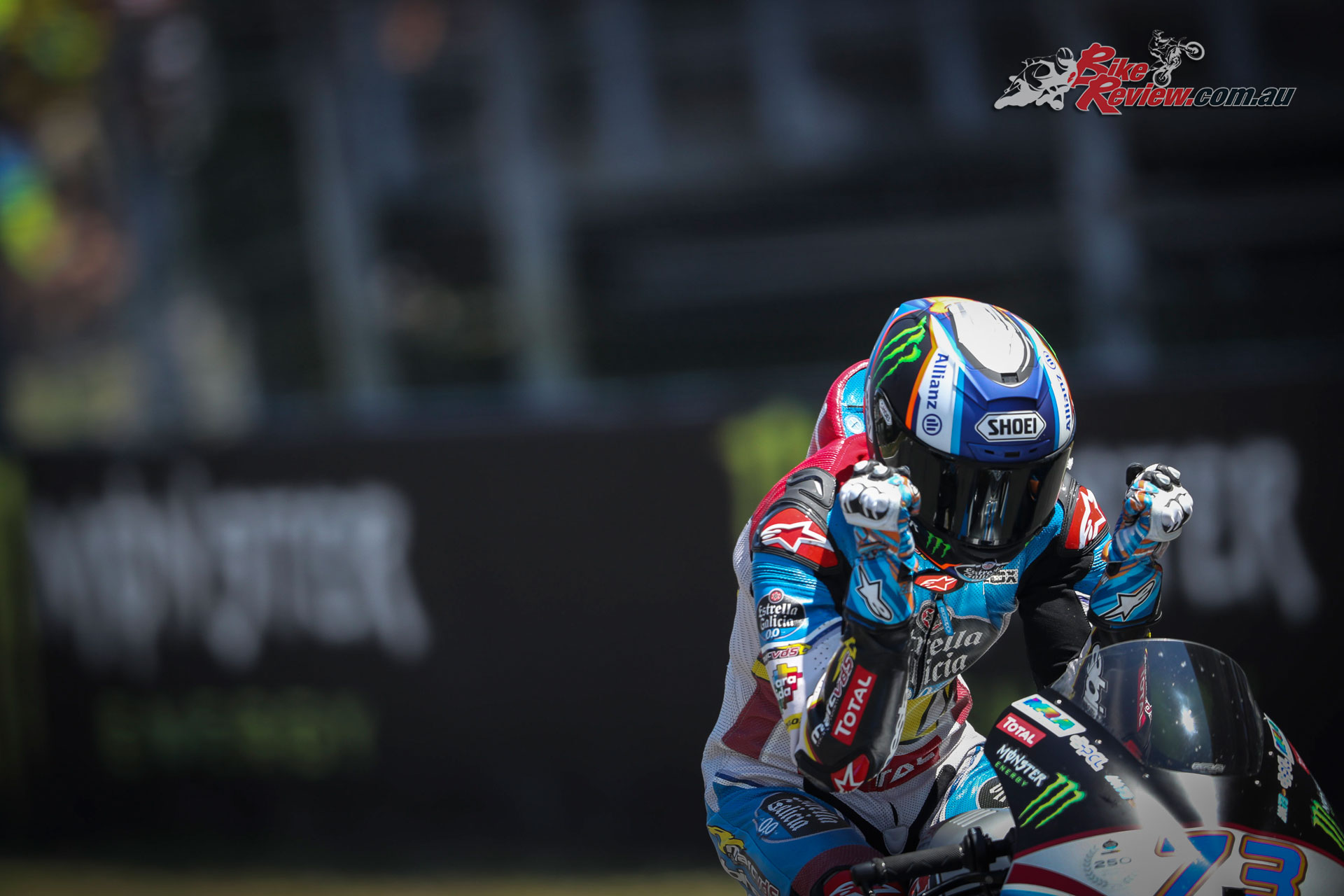 Marquez got a stunning start from pole, easily away into the lead as teammate Franco Morbidelli shot off the second row to take second into Turn 1, diving up the inside of Pasini and Lüthi. The Swiss rider then headed wide through the run off, rejoining behind Pasini before Miguel Oliveira (Red Bull KTM Ajo) needed no invitation to slice through.

Lorenzo Baldassarri (Forward Racing Team) was the rider to drop back slightly at the start from the front row, but the big headline first time over the line was Marquez’ advantage at the front – already over a second.

The 2014 Moto3 World Champion continued to pull away, with the gap hovering around four seconds by mid-race distance and the game changing from ‘charge’ to ‘control’.

It was initially a three rider fight to decide who would be first on the chase, with Pasini, Morbidelli and Lüthi in the battle for second – and Mugello winner Pasini the rider able to pull away. Swiss veteran Lüthi overcame the Championship leader to take third, before Morbidelli was then caught and passed by first Oliveira and then Baldassarri to drop back into sixth despite his lightning start.

Pasini kept it calm in second to keep Lüthi at bay for his second consecutive podium as the race settled into a rhythm, with the Swiss veteran completing the rostrum in P3.

Miguel Oliveira was on the chase late on, but the Portuguese rider eventually crossed the line in fourth in another impressive points haul for the new KTM Moto2 outfit. Baldassarri, after the disappointment of a DNF in Mugello, completed the top five to bounce back in style.

Rookie home hero Jorge Navarro (Federal Oil Gresini Moto2) threatened Morbidelli for sixth for a number of laps before the Championship leader was able to pull away, leaving Navarro to take seventh at the flag following an impressive rookie ride at the track on which he took his first ever win in Moto3™.

Fabio Quartararo (Pons HP 40) was the next rookie home in P8 after a spectacular battle to decide who would complete the top ten, with Xavi Vierge (Tech 3 Racing) striking late to move up into P9 despite missing the race in Mugello due to injury. Hafizh Syahrin (Petronas Raceline Malaysia) locked out the top ten, with Takaaki Nakagami (Idemitsu Honda Team Asia) pushed back into P11 on the final laps and Marcel Schrötter (Dynavolt Intact GP) crashing out late on.

Simone Corsi (Speed Up Racing) was P12 over the line ahead of a solid home ride for Isaac Viñales (BE-A-VIP SAG Team), with Francesco Bagnaia (Sky Racing Team VR46) taking yet more points in P14 as he pushes for Rookie of the Year despite a tougher weekend at the Catalan GP. Andrea Locatelli (Italtrans Racing Team) completed the top fifteen, scoring his first World Championship point in the intermediate class.

Next it’s Assen and the Dutch GP, as Marquez looks to take a consecutive win in Moto2™ for the first time – and Morbidelli aims to reassert his authority on the title chase. 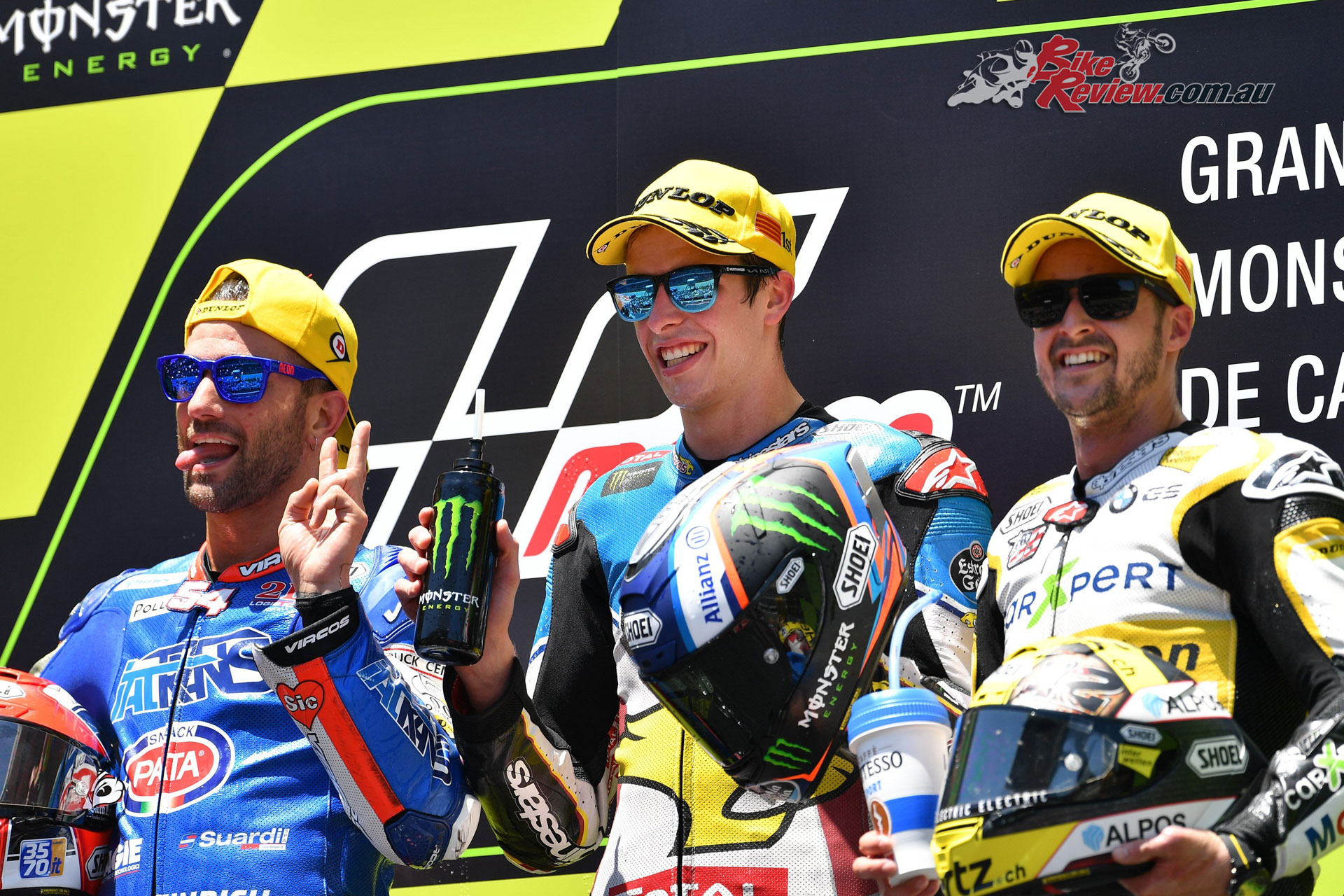 Mir: the master of Moto3 strikes again in Montmelo

Joan Mir (Leopard Racing) increased his advantage in the Moto3 title standings once again at the Gran Premi Monster Energy de Catalunya, taking a stunning win to go from third to first in the final sector of the last lap – just following the announcement of his move to Moto2 in 2018. 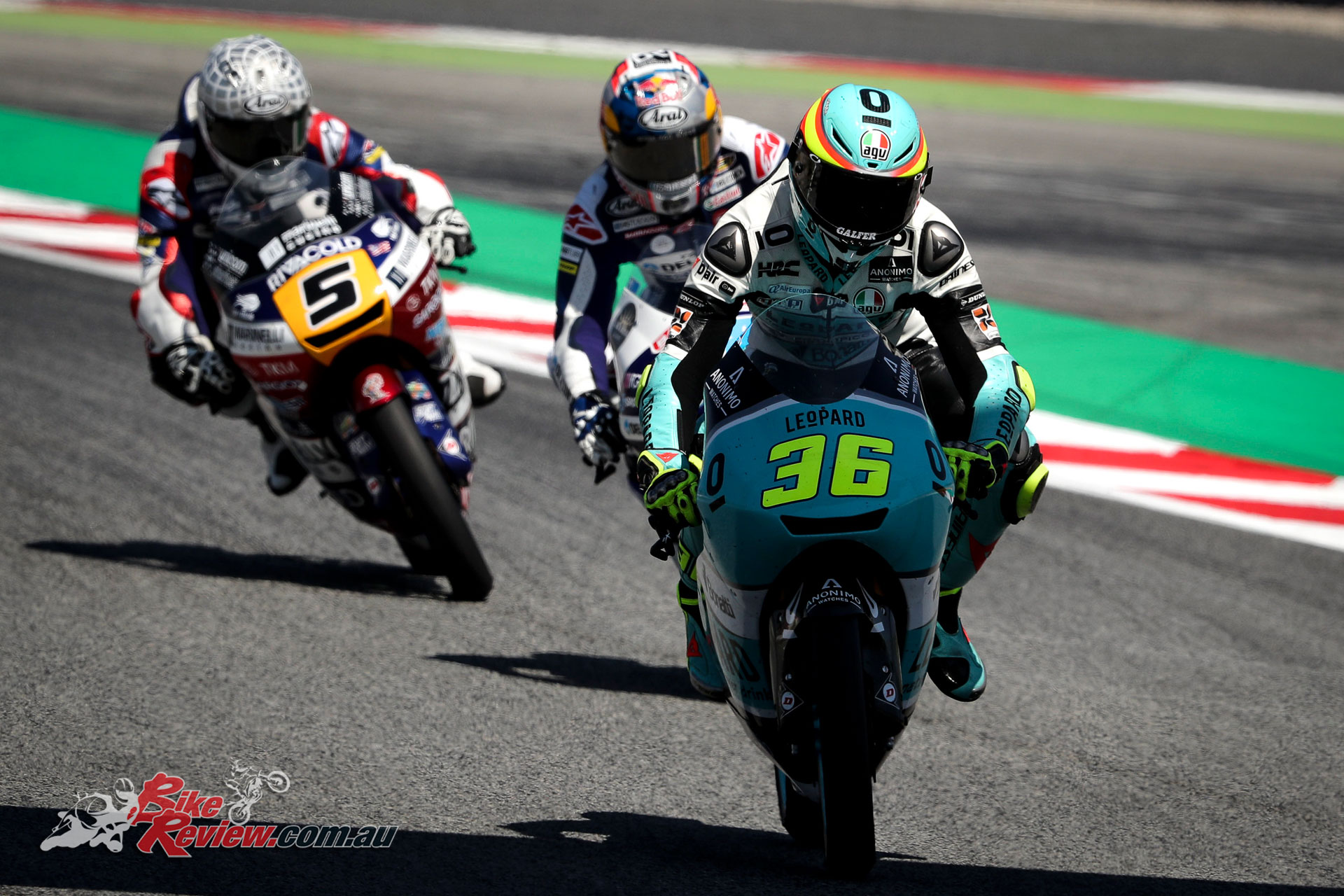 It was Juanfran Guevara (RBA BOE Racing Team) who got the holeshot into Turn 1, as compatriot and polesitter Martin was slow away from the line and dropped back slightly. Fenati soon struck against Guevara for the lead, however, with Championship leader Mir and fellow title hopeful Aron Canet (Estrella Galicia 0,0) then following the Italian through.

As the rhythm started to settle, there was a front group of five who emerged from the melee – Canet, Fenati, Martin, Fabio Di Giannantonio (Del Conca Gresini Moto3) and Mir – with Enea Bastianini (Estrella Galicia 0,0) the man pushing to bridge the gap.

Second row starter Marcos Ramirez (Platinum Bay Real Estate) dropped back slightly in the initial laps to lead the second group in P7, with RBA BOE Racing teammates Gabriel Rodrigo and Juanfran Guevara just tucked in ahead of Niccolo Antonelli (Red Bull KTM Ajo). Rodrigo then crashed out of contention at the final chicane following contact with Ramirez, moving Tatsuki Suzuki (SIC58 Squadra Corse) up a place in the fight.

With Bastianini arrived on the scene, the lead group of six chopped and changed positions – including a run off for ‘Diggia’, but the Italian tagged back onto the rear of the group as Ramirez and Suzuki started to come into contention. Another on the charge was Nicolo Bulega (Sky Racing Team VR46), as the Italian moved through the second group to also try and hunt down the leaders.

After a run off for Ramirez at Turn 1, the Spaniard rejoined just behind the front five as the final laps dawned – with Martin leading Fenati, Bastianini, Mir, Canet and the Platinum Bay Real Estate rider over the line for the last lap.

The tousle for positions saw some signature incredible Moto3™ moves as the corners remaining ticked down, with a decisive move from Mir then seeing the Mallorcan mug Martin for the lead, and Fenati sweep around the outside of the polesitter into the final chicane – with both holding their advantages over the line.

Bastianini beat Canet for fourth at the flag, with Ramirez completing another impressive performance to complete the top six. Di Giannantonio took P7, ahead of a stunning ride for Andrea Migno (Sky Racing Team VR46) after the Mugello winner managed to tag onto the frontrunners late on having stormed from P20 on the grid to take eighth. Teammate Nicolo Bulega was P9, with Tatsuki Suzuki completing the top ten in a fantastic result for SIC58 Squadra Corse.

There was drama further back on the final lap, as Guevara came together with Platinum Bay Real Estate rider Darryn Binder and both riders crashed out – with another crash also seeing Jules Danilo (Marinelli Rivacold Snipers) suffer a DNF.

Next up it’s the historic TT Circuit Assen, with Mir now even further ahead in the standings as he celebrates his latest win – as well as a new three-year deal with EG 0,0 Marc VDS to move up to Moto2 next season. 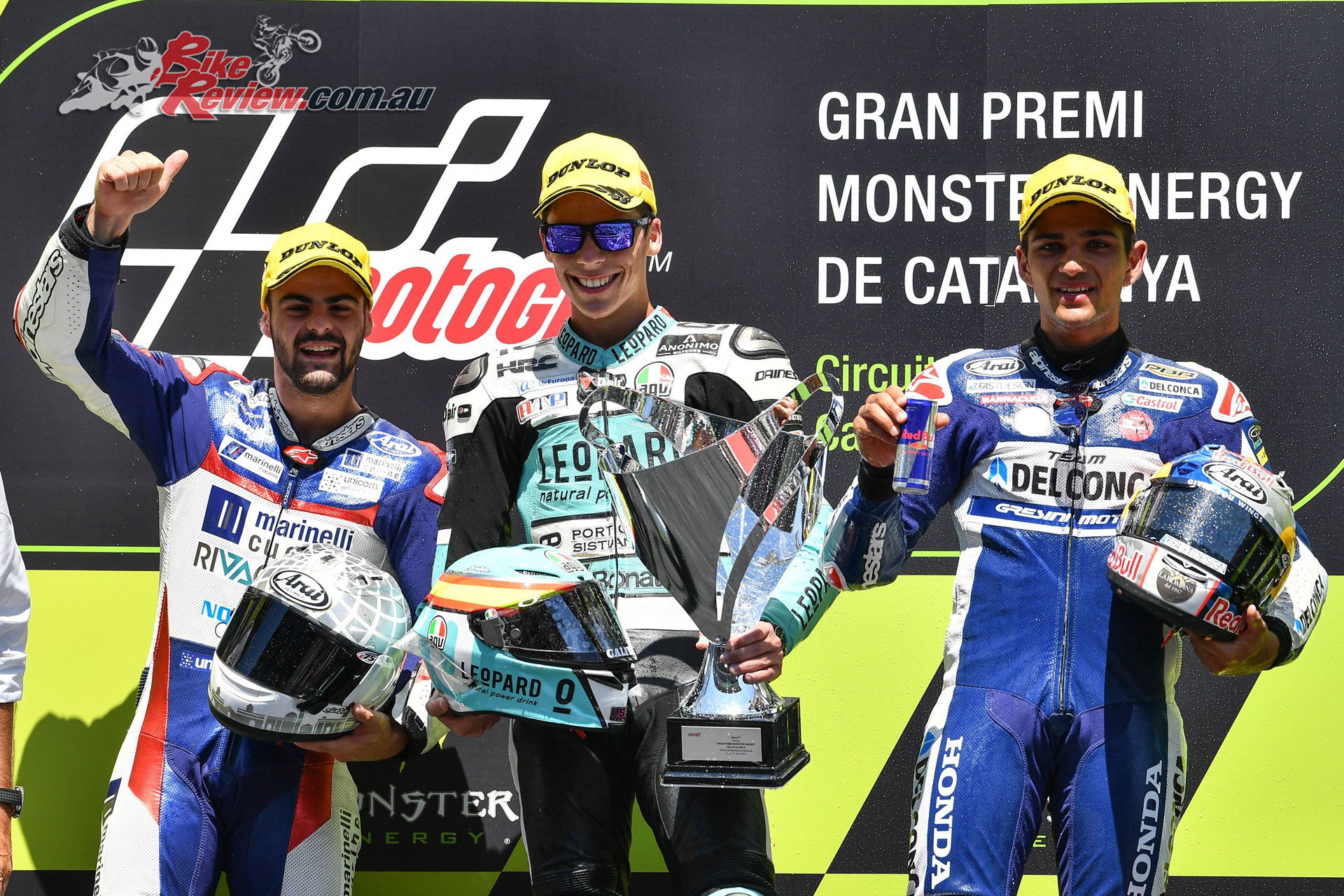