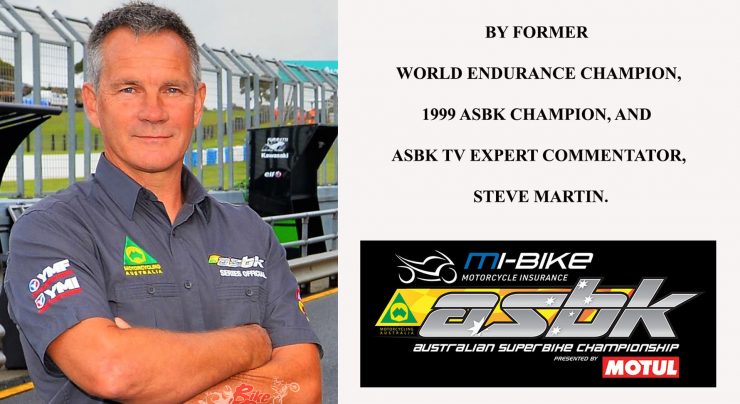 Winton Motor Raceway has decided past ASBK Championships, and as the first race of 2021, riders will be extremely keen to finish in the points to kickstart their title chase. Ex-racer, Steve Martin, walked us through the track and how riders will get max potential around it – Feature from MA. 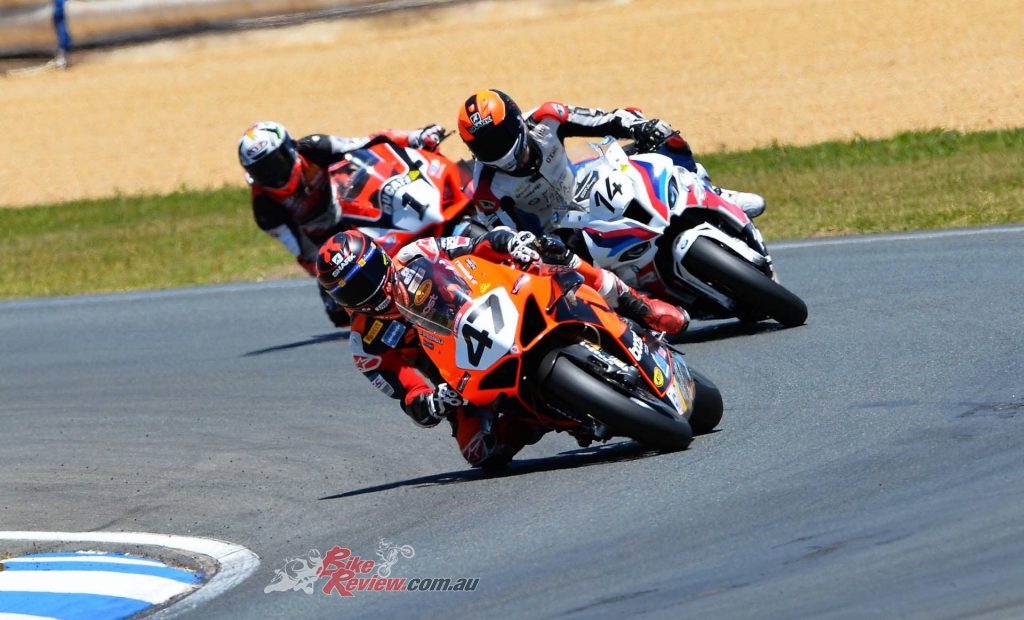 Six categories will pack out the field, from champions in the main series to first time racers in the OJC.

Winton is a physically demanding circuit for riders, and they will need every ounce of strength and fitness they have developed over the Christmas break to get the best out of their machine and body this weekend.

It is really important to get into turn one in a good position, because it bottlenecks down as you change direction into turn two. It is one of the most critical corners on the circuit to get right. Winton management have also removed the marshal barrier between one and two, a positive move which could see riders risk the outside line more. 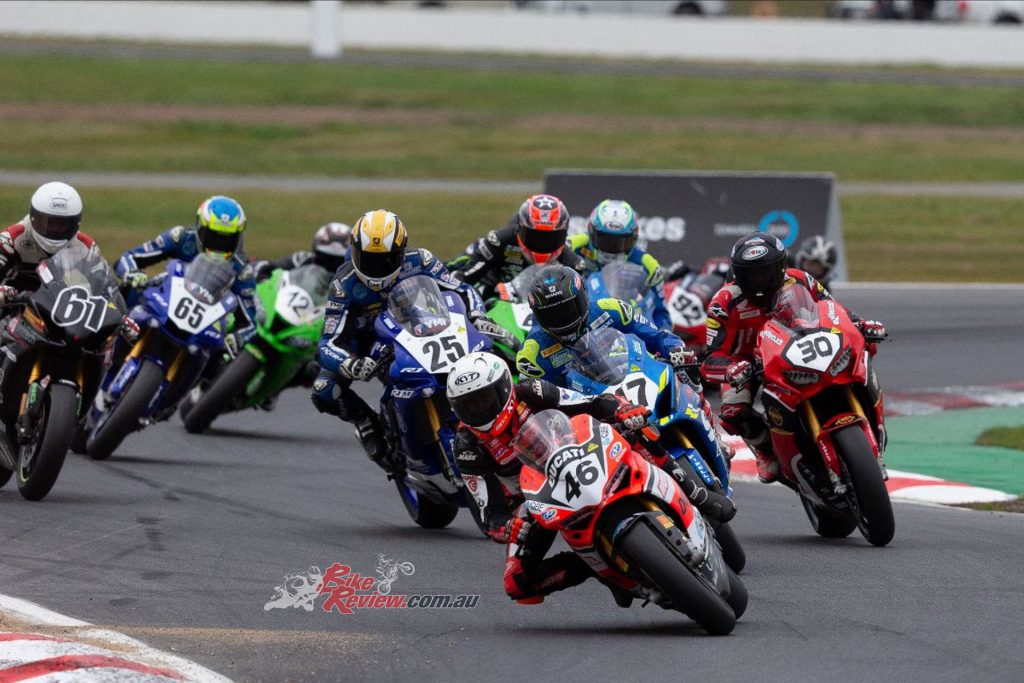 Turns one and two are an interesting combo that can make or break a riders race.

Turn two is a great place to spectate because you will see the bikes sliding out of that corner – it is one of the most spectacular spots to see these high-powered Superbikes spinning the rear wheel while also battling to keep the front end down.

Heading into turn three, it is a little bit off camber, downhill, and a bit of a blind entry too. Since ASBK were last at Winton there has been an upgrade extending the width of the exit which will obviously allow the bikes to power out of the corner even harder. Riders can overtake at turn three as long as they are brave enough and dedicated to chuck it down the inside of their opposition, while also having enough brakes to take the corner and not end up in the sand trap. 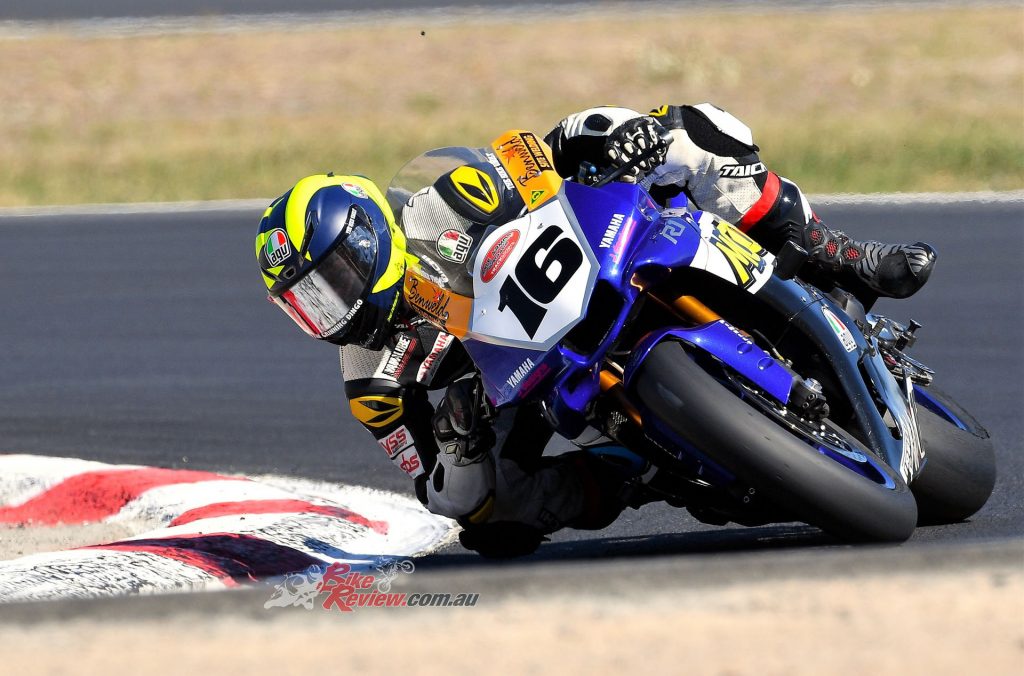 “It is a squirt on the throttle out of turn three, and then into turn four. Riders will need to keep the pace as opponents will try to duck down the inside.”

It is a squirt on the throttle out of turn three, and then into turn four. Riders will need to keep the pace as opponents will try to duck down the inside and any loss of momentum into four harms their exit speed and acceleration on the short straight between turn four and the sweeper into five.

Turn five Is the longest corner on the circuit and riders need to be aware of the bumps on entry, but it is also a corner where riders can make up a lot of time. During Friday’s practice session riders will spend a lot of time perfecting their corner speeds through turn five. 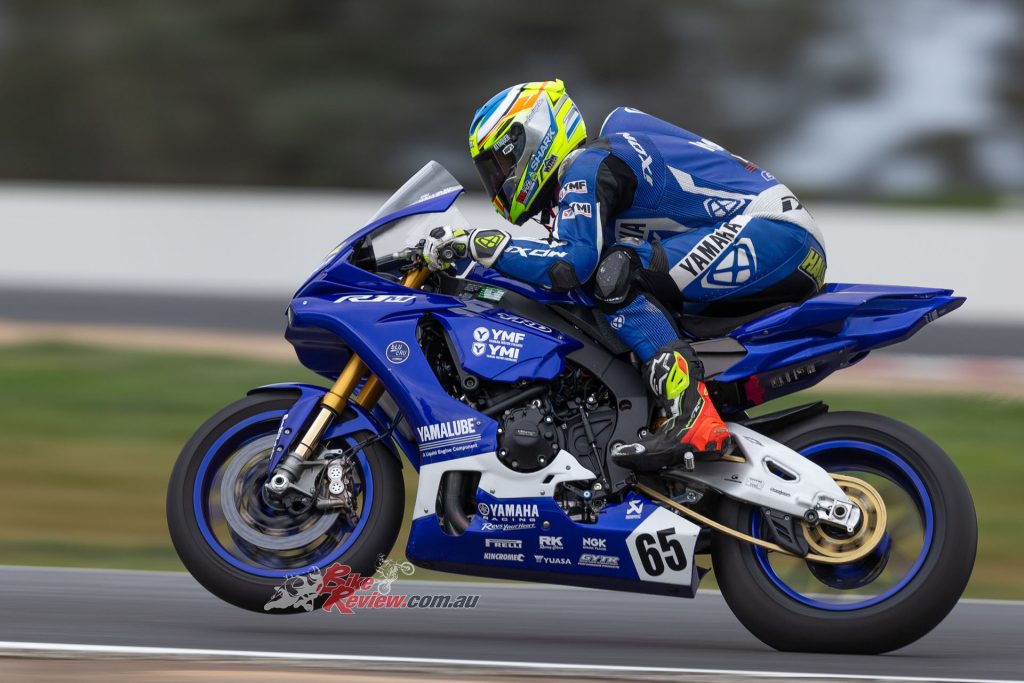 Turn five is one of the longest corners on the track, a great spot to watch some mid corner overtaking.

Turn six is tricky as there is only one line into that turn, so it is really critical to get that right. Get it wrong, and you will easily be mowing the grass.

Turns seven, eight and nine all flow together. Into turn seven, riders need to breathe on the brake lever and try not to wash as much speed as they’d like. It is cambered, and it does help the riders, but they need to keep that corner speed through there heading into the next ‘left-hander’. 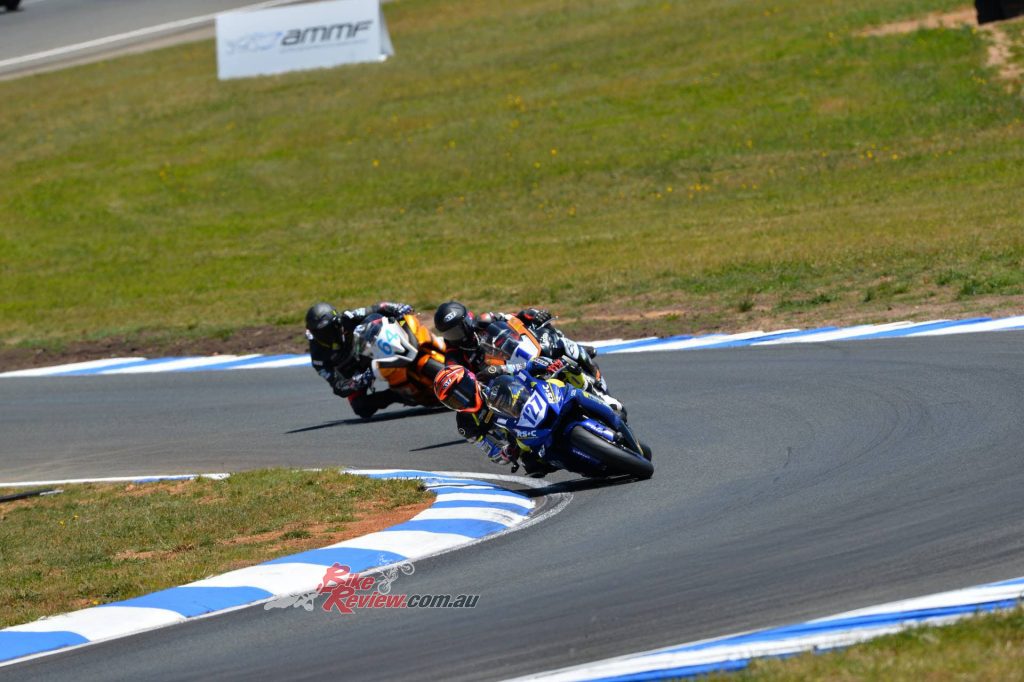 For another great spot to watch multiple corners, head to Turns seven, eight and nine as they all flow together.

On turn eight riders need to be careful because competitors can nip-up the inside of them, so it is definitely an over-taking opportunity. It is critical to exit that turn tight, which gives them a good entry into nine, because the most important part is getting onto that back straight as upright as possible to get as much power on the ground.

Turn ten is the hardest left-breaking corner on the circuit. It is really easy to run-on there, and if riders do run-on, they’re in trouble. So, riders should spend time at practice pushing the limits in that corner, so they don’t make a mistake during the race. 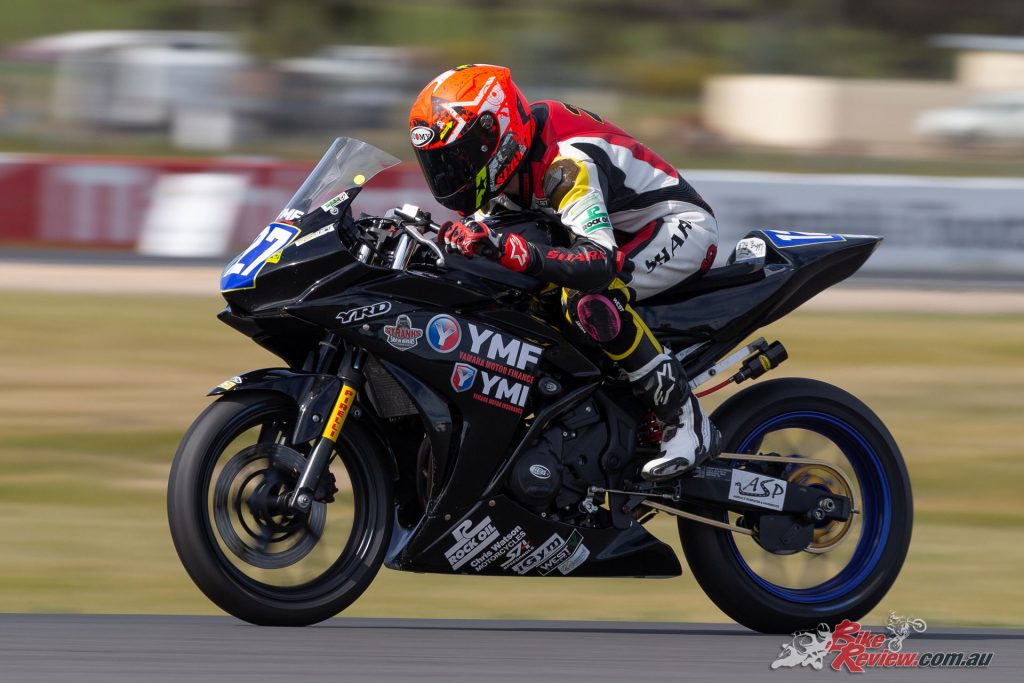 The lower capacity bikes will need to keep their momentum up through the entire track as it’s easy to fall behind.

Riders build up a lot of speed going from ten along Ducati straight into eleven, it’s another good opportunity to overtake, but also a little bit bumpy as you tip-in, so rider have got be really careful that they don’t tuck the front. But at the same time, they cannot leave a gap because someone could dive up the inside of them.

If riders can string their laps together right, and have the perfect exit out of Yamaha corner onto the mi-bike straight, they will be greeted by the chequered flag first, crowd cheering and 25 glorious points towards their title chase. 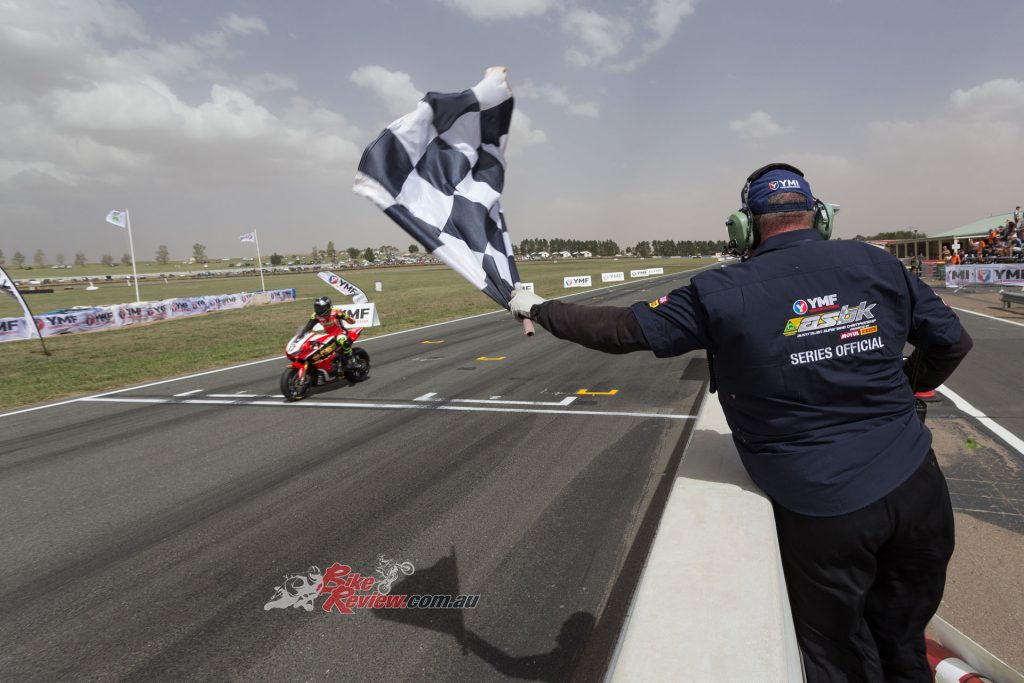 If riders get the whole track right, they’ll be awarded with a big boost for their ASBK title dreams.

If you can’t get track side this weekend, don’t stress! Coverage of the round begins Sunday on SBS Viceland or Fox Sports Channel 507 from Midday to 3pm, and the ASBK TV Live Stream coverage runs all day from 9.30am to 4.20pm via the ASBK website.