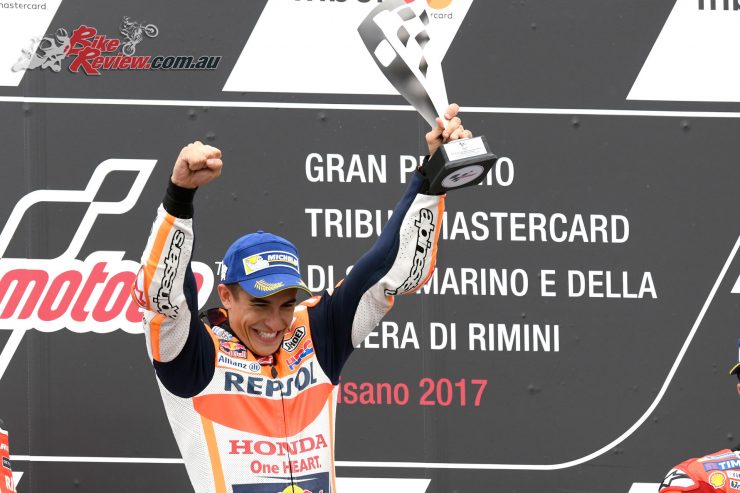 Marc Marquez (Repsol Honda Team) took his fourth win of the year in a high stakes duel at Misano World Circuit Marco Simoncelli, with the conditions torrential and the top three in the title fight lining up for the challenge on the front row.

But as the spray cleared, it was Danilo Petrucci (Octo Pramac Racing) just ahead of the reigning Champion on track as the two dueled – and Marquez pounced on the last lap for another 25 point haul. That gives the number 93 the Championship lead once again as Andrea Dovizioso (Ducati Team) came home third, with the two rivals equal on points and equal on wins – and Marquez ahead by virtue of more second places. 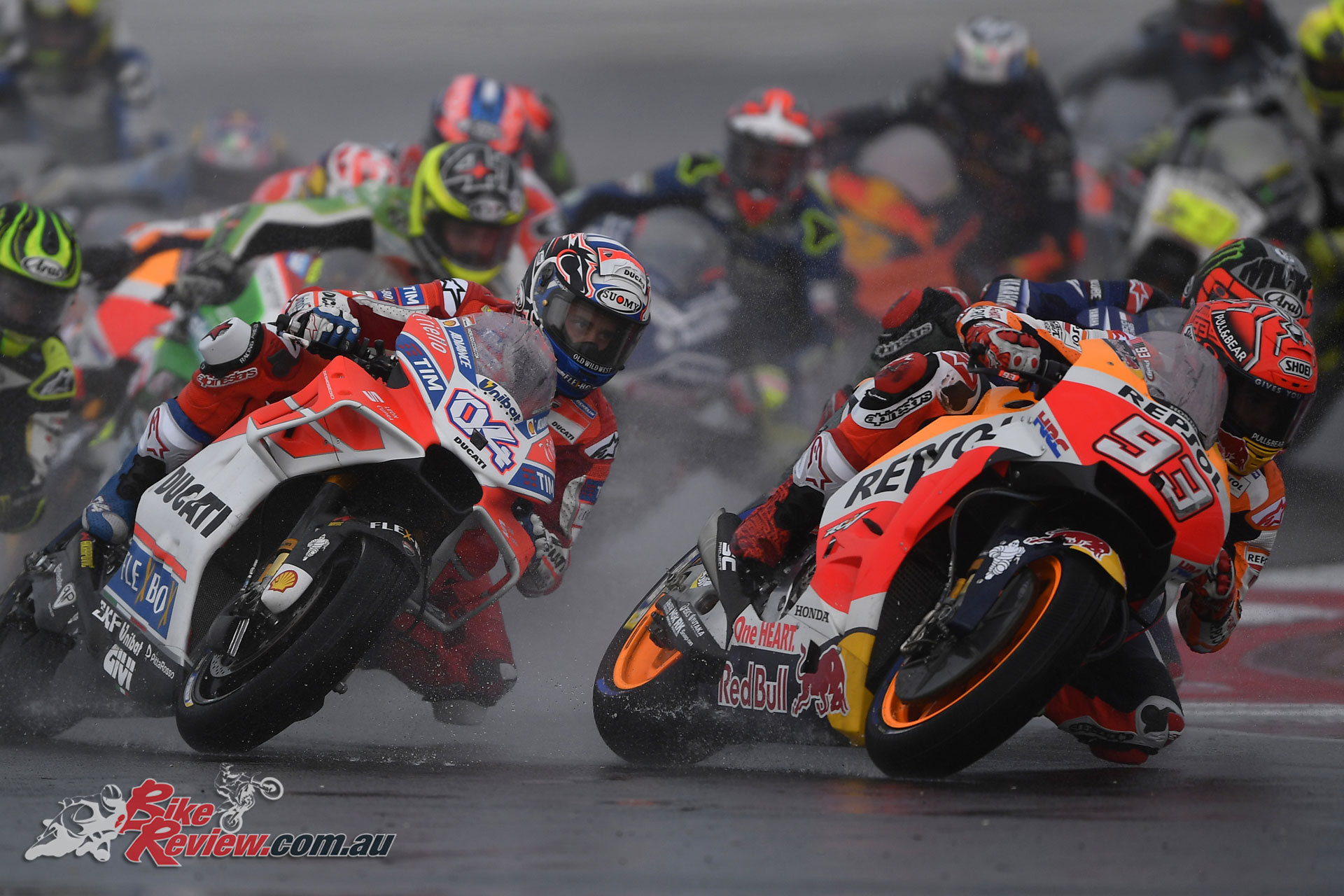 Marquez in the lead in wet conditions

But despite the challengers on the front row in the #SanMarinoGP, it was Jorge Lorenzo (Ducati Team) who got away best from Row 2, taking the lead through the first two corners after tousling with Marquez and shooting away into the distance. Marquez slotted into second and Dovizioso in third, with Petrucci then slicing around the outside of Maverick Viñales (Movistar Yamaha MotoGP) at the start of the second lap to begin his charge. After Viñales, the Pramac rider then shot past Dovizioso, beginning to hone in on Marquez and then taking over in second.

After setting the timesheets alight and clear in the lead, drama then struck the head of the race as Lorenzo suddenly highsided out at Turn 6 – rider ok – leaving Petrucci in the lead and a long game of highspeed chess to set in: Petrucci, Marquez, Dovizioso, and nothing between them. 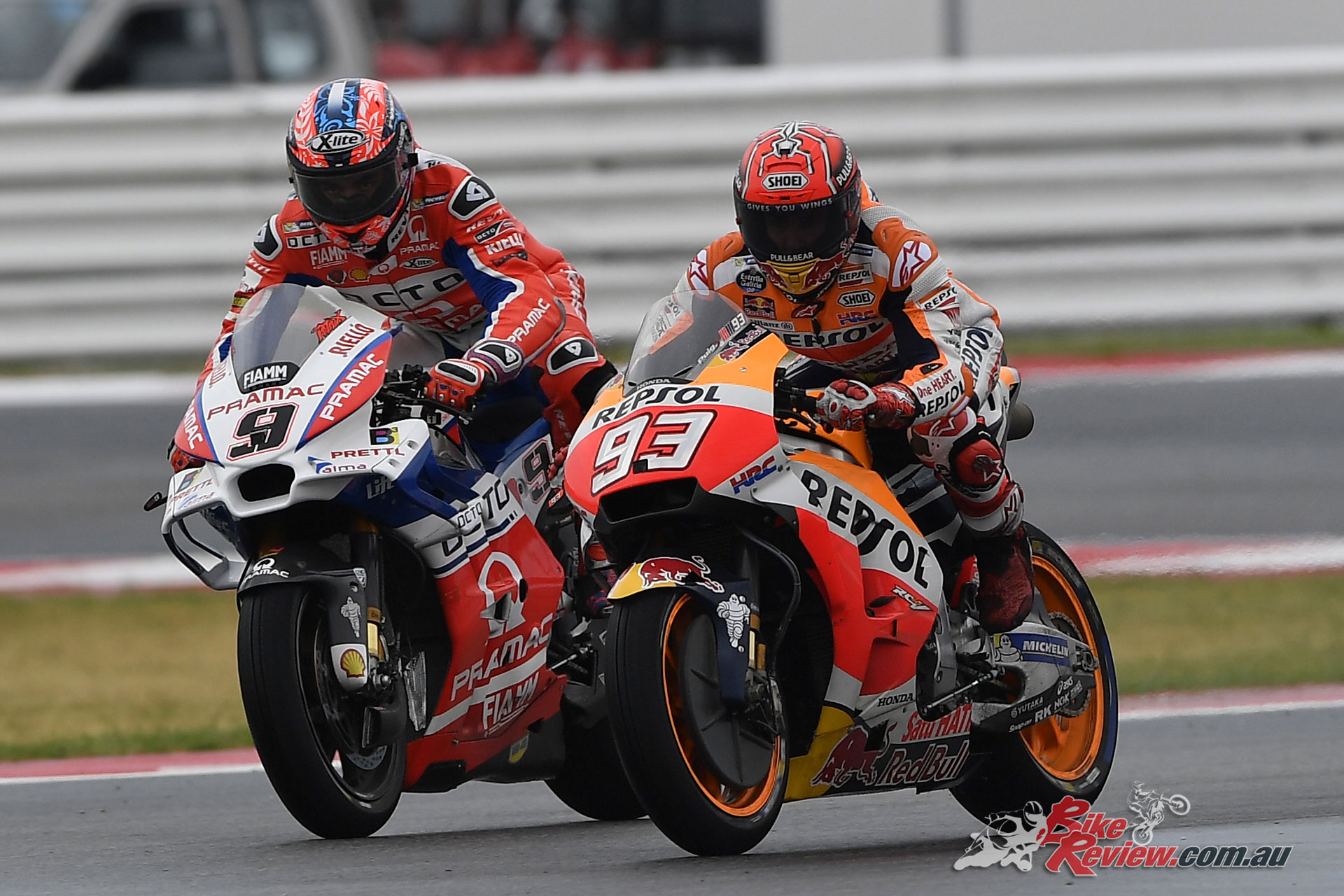 As the laps ticked on and the stakes seemed to get higher and higher, Dovizioso began to fade backwards and the trio became a duo in the battle for the win. The ring of the Honda getting louder and louder behind him, Petrucci held firm but Marquez chose his moment well: heading through at Turn 1 on the final lap. The rider from Cervera was then able to keep a small margin as the spray kicked up behind him, holding his nerve to take win number four of the year – and the Championship lead.

That meant Petrucci took second and his fourth premier class podium, 1.1 seconds off the win after Marquez fired in the fastest lap of the race on the final lap. Dovizioso took a safe third place – his first podium finish at Misano – and another good haul of points, with Viñales able to similarly avoid mistakes despite the stakes, taking fourth to keep himself very much in the title fight.

Behind the front four, Michele Pirro (Ducati Team) made steady progress and once again impressed as a wildcard for the Borgo Panigale factory, completing the top five. Jack Miller (EG 0,0 Marc VDS) put in a signature stunner in the wet from way down on the grid, for some time threatening Viñales for the top four before eventually crossing the line in sixth. Seventh over the line was a fight back from Scott Redding (Octo Pramac Racing), ahead of a quality ride from rookie Alex Rins (Team Suzuki Ecstar). 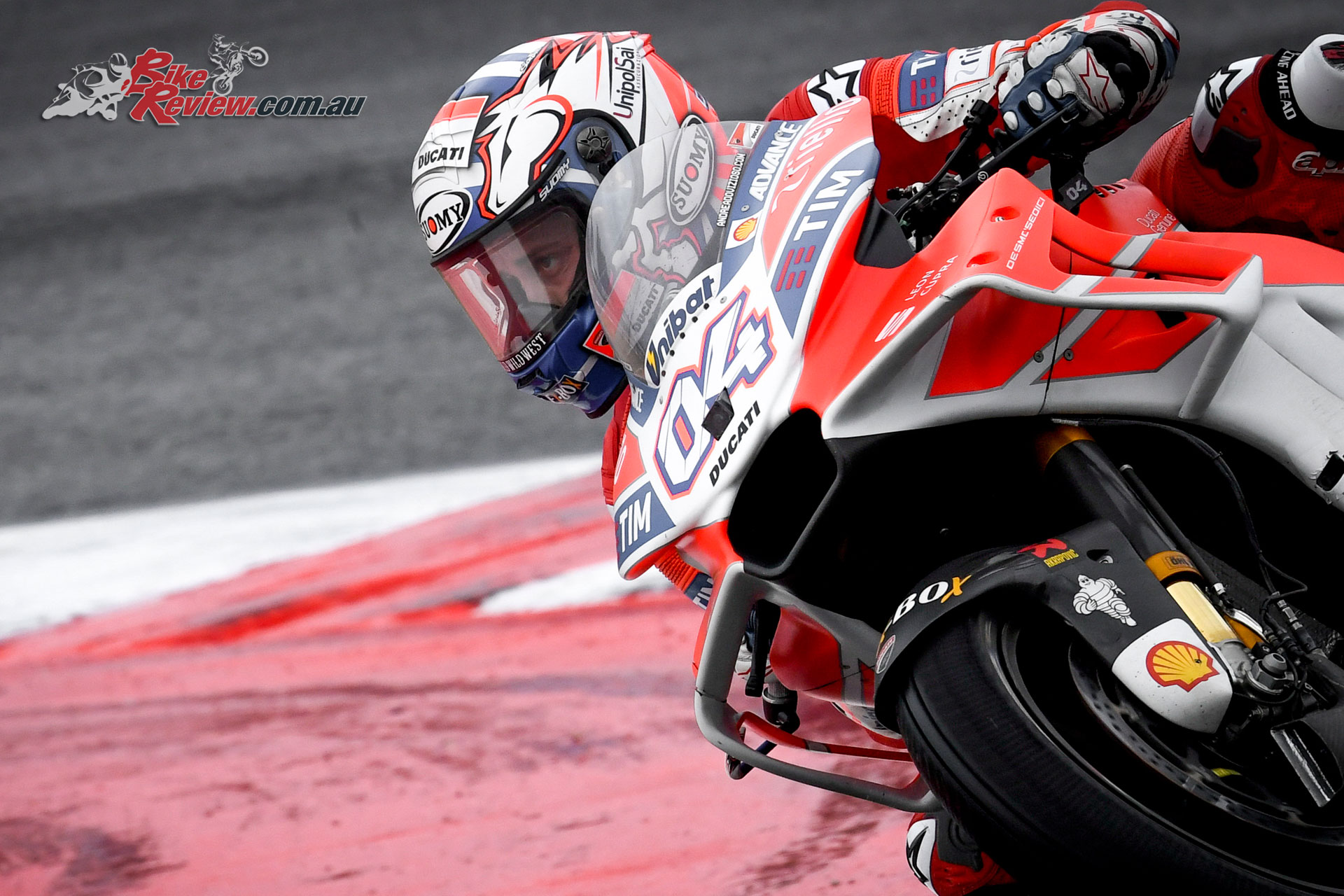 Jonas Folger (Monster Yamaha Tech 3) shot through the field from P16 on the grid to take ninth, with an impressive double act behind him for Red Bull KTM Factory Racing, as Bradley Smith took his first top ten with the Austrian factory and teammate Pol Espargaro crossed the line in eleventh.

Alvaro Bautista (Pull&Bear Aspar Team) took points in P12 and kept out of trouble, ahead of Cal Crutchlow (LCR Honda) in P13 – who crashed in the early stages and remounted. It was a tough day at the office for Dani Pedrosa (Repsol Honda Team), as the Spaniard struggled to find grip and get heat into the tyres, crossing the line in P14. Johann Zarco (Monster Yamaha Tech 3) supplied some late drama as he had a problem on the final lap, but managed to push the bike over the line for the final point.

Now it’s the final European round before the flyaway races, and Marquez and Dovizioso are equal on points. They’re also equal on wins, but the number 93 has more second places – making him the new leader in the sixth change so far this season. And Aragon? That’s Marquez’ backyard, and the number 93 will march home with a single focus: victory. 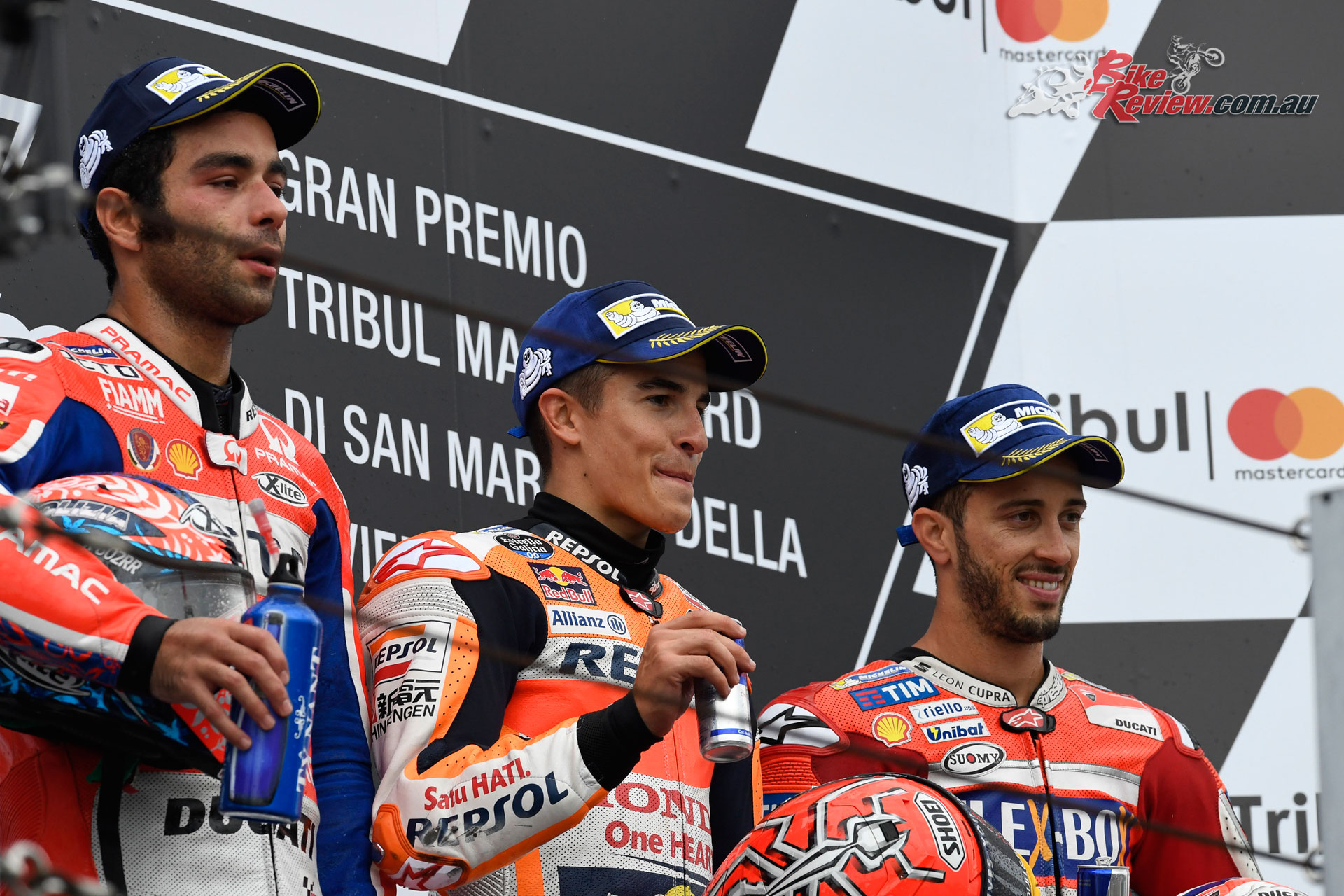 Marquez topped the MotoGP podium, with Petrucci and Dovizioso rounding out the top 3

Aegerter majestic at Misano for a stunning wet win

Dominique Aegerter (Kiefer Racing) mastered the soaking conditions at Misano to take his second ever Grand Prix victory, under pressure from title challenger and compatriot Tom Lüthi (CarXpert Interwetten) throughout until pulling away over the final laps to take the first win on a Suter since Valencia 2014. 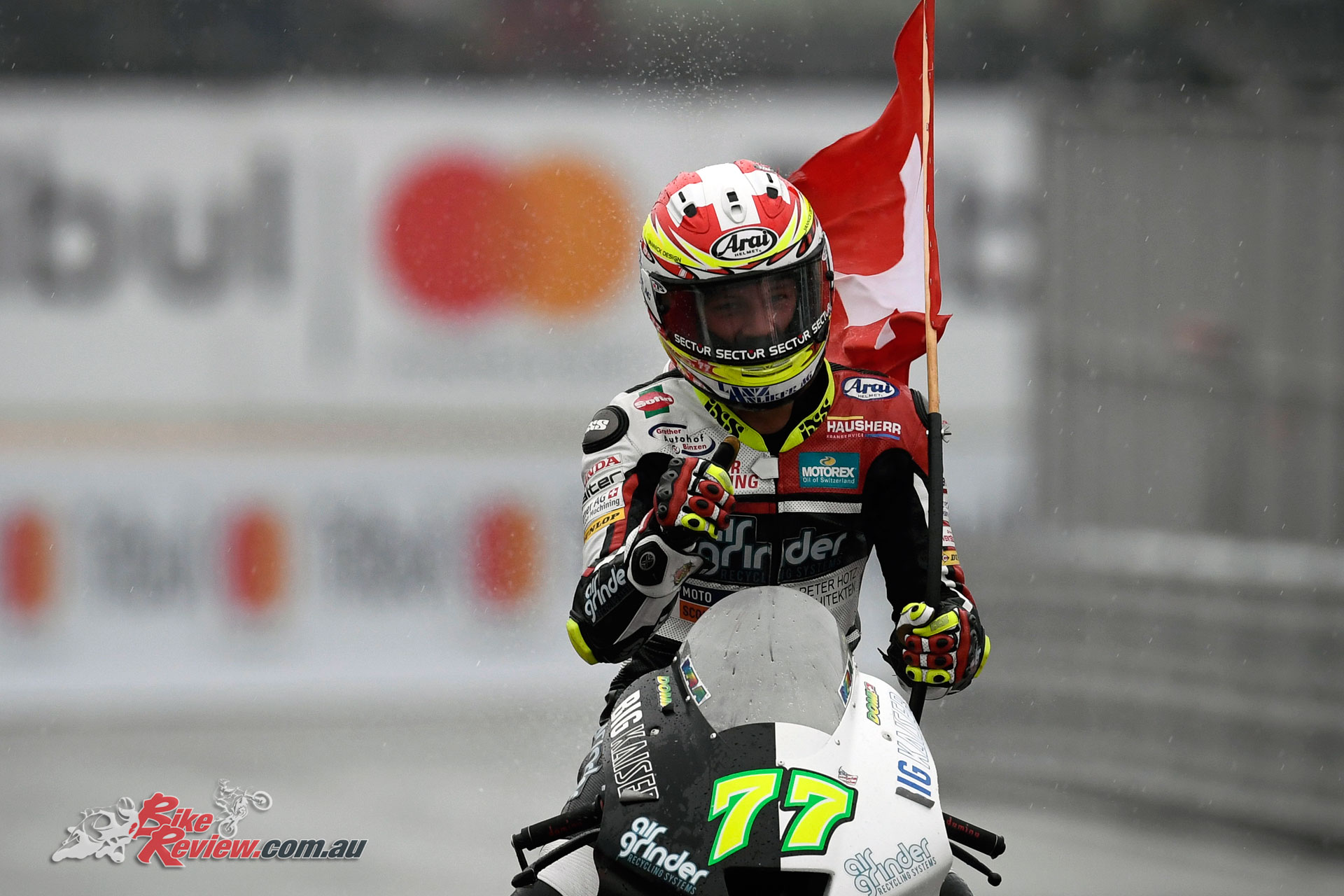 That was a headline, and the San Marino GP wrote a few more as Championship leader Franco Morbidelli (EG 0,0 Marc VDS) crashed out of the lead early on, meaning Lüthi hops up to only nine points off the top of the standings after his second place finish. Completing the podium was another newsworthy performance as Hafizh Syahrin (Petronas Raceline Malaysia) put his wet weather pace to good use to join the first ever Swiss 1-2 celebrating on a rainy rostrum.

It was Morbidelli who got the best start as polesitter Mattia Pasini (Italtrans Racing Team) lost out slightly off the line, and the EG 0,0 Marc VDS rider soon began pulling away in the lead. But it wasn’t to be, crashing out soon after and leaving a Swiss 1-2 as Aegerter led Lüthi. Pasini then crashed out soon after that, followed by Miguel Oliveira (Red Bull KTM Factory Racing) – but the frontrunners held firm.

The two Swiss riders remained locked together for much of the race, with Aergerter ahead bar one mistake that allowed his compatriot briefly through. But once back in the lead, the Kiefer Racing rider was back in control and held firm under the pressure until pulling away to win by 1.4 seconds. Lüthi took second to make up huge ground in the Championship, with Syahrin threatening to close for some time before eventually taking third and his second ever podium finish. 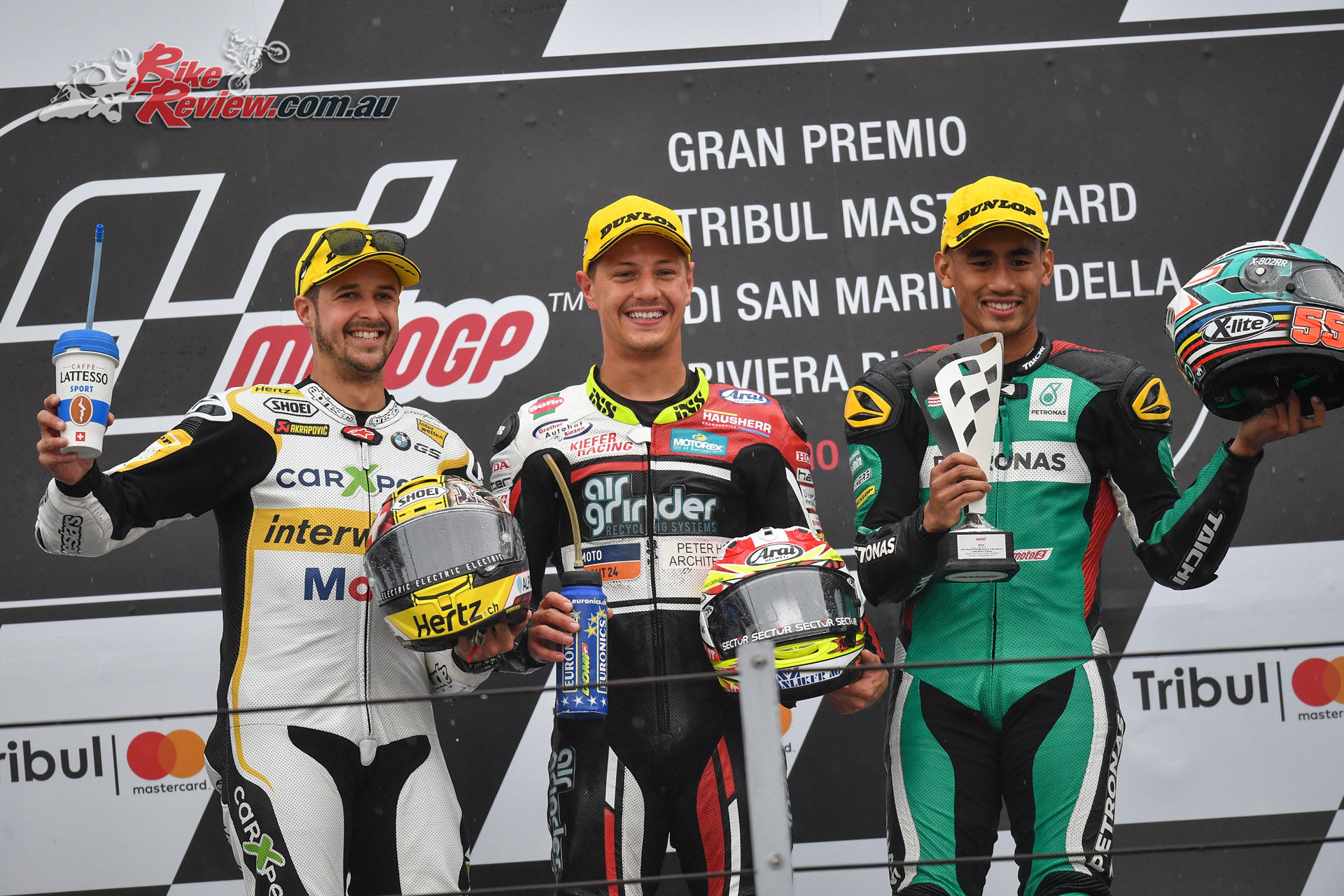 Francesco Bagnaia (Sky Racing Team VR46) kept calm and carried on in torrential conditions for another incredible rookie result to take fourth, with reigning Moto3 Champion Brad Binder (Red Bull KTM Ajo) another newcomer with a top result as he completed the top five. Sandro Cortese (Dynavolt Intact GP) came back with a solid sixth after a tough weekend.

Fabio Quartararo (Pons HP 40) took an impressive seventh as another top rookie, although the Frenchman was served a short time penalty and had crossed the line ahead of Cortese. Simon Corsi (Speed Up Racing) was next over the line despite late drama – crashing at the final corner but able to get it to the flag in eighth.

Next up is Aragon and a very different racetrack once again – with the margin at the top now cut down to nine points and Morbidelli looking to bounce back quickly.

One-man show: Fenati flawless in the wet for a home win

Romano Fenati (Marinelli Rivacold Snipers) left the field in the dust at Misano World Circuit Marco Simoncelli, taking his ninth win in Moto™ by more than 28 seconds by the flag. The Italian, who took his first win in similar style at Jerez in 2012, put in a masterclass in the rain to claw back some points in the Championship over Joan Mir (Leopard Racing) – the man who came second. 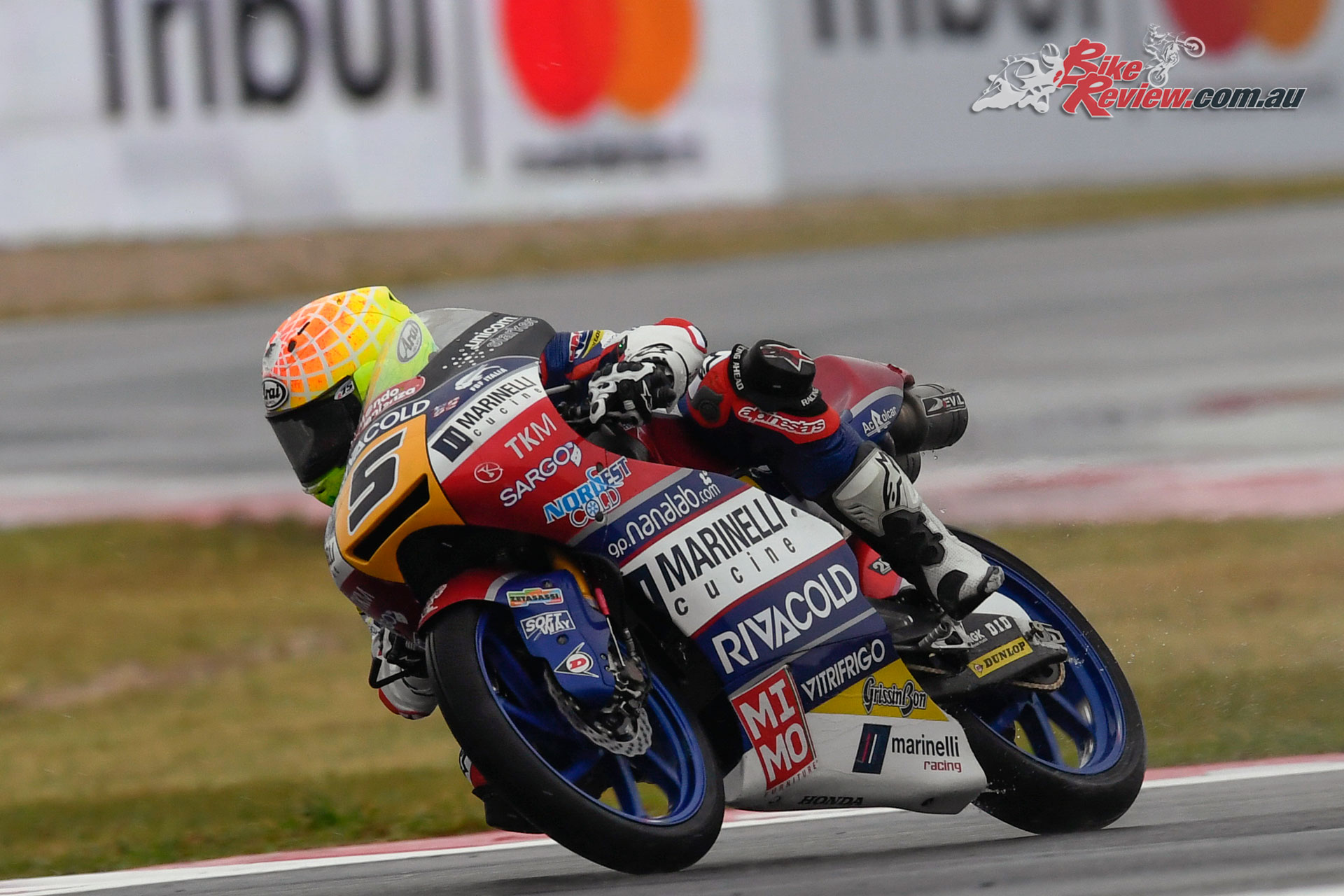 The podium was completed by front row starter and second home hero home Fabio Di Giannantonio (Del Conca Gresini Moto3), with only 15 finishers, all of whom scored points in a race of attrition.

It was the man starting from the front, Jorge Martin (Del Conca Gresini Moto3), who took early control, but by 19 laps to go Fenati hit the front ahead of Fenati and Mir – and didn’t look back. ‘Diggia’ suffered a moment and dropped back slightly from the podium battle, before Enea Bastianini (Estrella Galicia 0,0) took a tumble – the first of two.

There was another wobble at the front soon after, as Martin saved a huge moment at Turn 6 – soon followed by Mir, bringing the two rivals back together on track in second and third. But it didn’t remain that way for too long, with Martin then sadly sliding out at Turn 1 – rider ok.

That left Mir the man on the chase, but the Majorcan hadn’t got the pace to stay with the Italian out front and the gap kept steadily increasing. But the Championship leader stayed calm, keeping it all together as the battle for the final podium place reignited behind him.

Di Giannantonio was the man in third, but Aron Canet (Estrella Galicia 0,0) was lighting up the timesheets. The Spaniard caught the Italian and passed him, before ‘Diggia’ hit back. But Canet wouldn’t be deterred and pushed on – then losing out later as he crashed out of contention chasing the Italian.

Philipp Oettl (Südmetall Schedl GP Racing) came through from P11 on the grid to eventually cross the line in a lonely fourth, an earlier podium contender but then just dropping off the battle for third. Nicolo Bulega (Sky Racing Team VR46) likewise crossed the line lonely, likewise taking some solid points and avoiding mistakes to complete the top five.

Bo Bendsneyder (Red Bull KTM Ajo) took a good haul of points home in sixth, just ahead of Jakub Kornfeil (Peugeot MC Saxoprint) – a result made even more remarkable by the fact that both riders had crashed and remounted, slicing back through the field once back on board. Albert Arenas (Aspar Mahindra Moto3) took his first ever top ten result behind the duo as he crossed the line in eighth, despite not riding in the only other wet session of the weekend: Sunday Warm Up.

Andrea Migno (Sky Racing Team VR46) – winner in Mugello – got more points on home turf as he came ninth, ahead of replacement rider at Platinum Bay Real Estate Jaume Masia in another impressive performance from the Spaniard. Manuel Pagliani (CIP) was P11, ahead of Marcos Ramirez (Platinum Bay Real Estate) in twelfth after a big save. Wildcard Alex Fabbri (Minimoto Portomaggiore) took points and stayed out of trouble in thirteenth in a good day’s work for the Italian.

Compatriot Enea Bastianini crossed the line in P14 to collect two points on home turf despite two crashes, and reigning Moto3 Junior World Champion Lorenzo Dalla Porta (Aspar Mahindra Moto3) rounded out both the finishers and the points scorers in P15, also despite a crash.

Some wet weather superstars before failing to finish were Tatsuki Suzuki (SIC58 Squadra Corse) and teammate Tony Arbolino, and Japanese rookie Ayumu Sasaki was in sixth before a fall at Turn 6 ended the SIC Racing Team rider’s charge. John McPhee (British Talent Team) also fell foul of conditions, as well as Niccolo Antonelli (Red Bull KTM Ajo). And a late crash for Patrik Pulkinnen (Peugeot MC Saxoprint) provided some drama, as the Finn managed to make it to the line but outside the time limit to be classified, having been a lap down on leader Romano Fenati but on for P13. 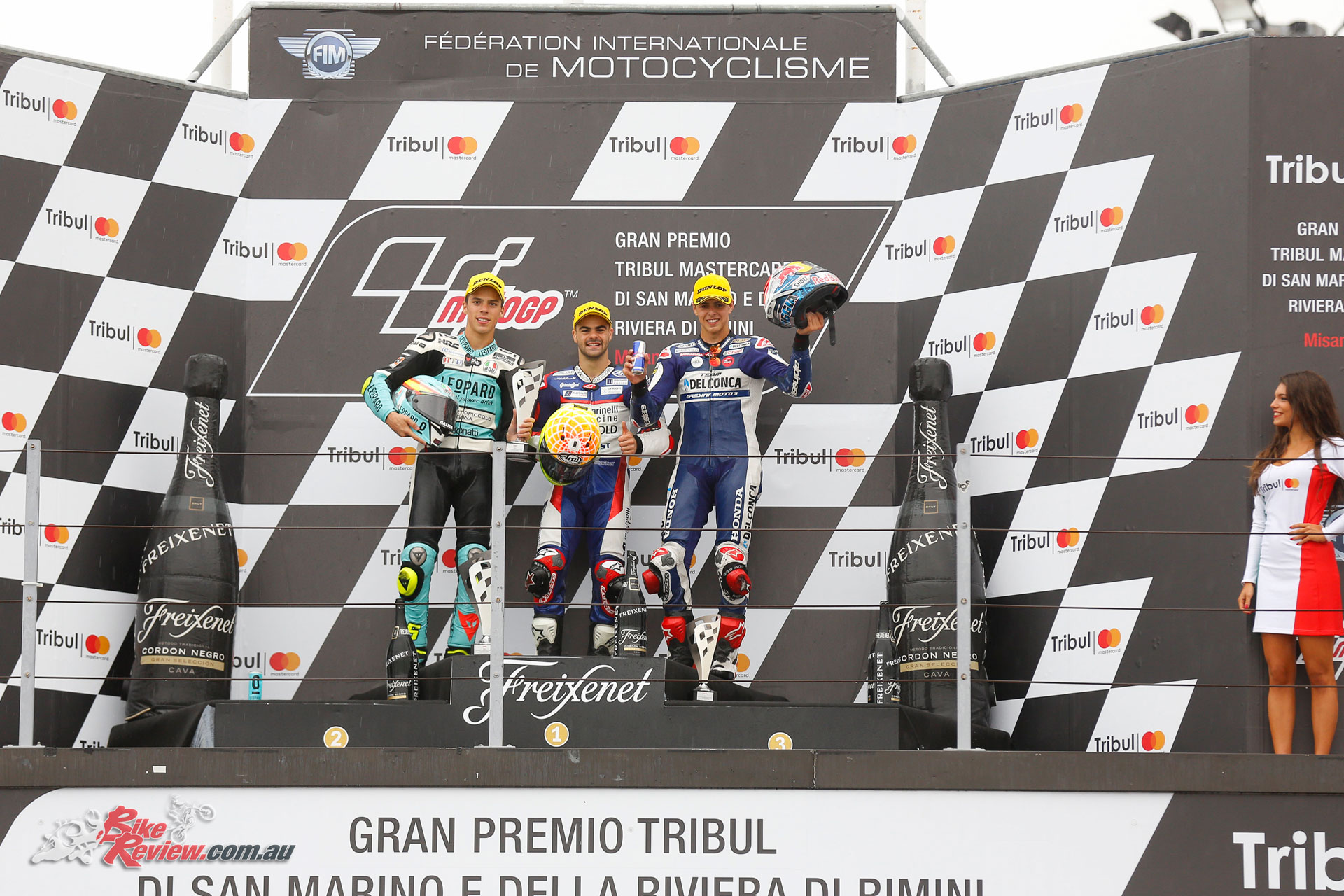 The paddock now moves to MotorLand Aragon and home turf for Mir, with the points gap now cut by a small margin but the Championship leader still very much in control as Fenati tries to charge back – with nine wins in the class, now the equal most successful Moto3™ rider in terms of wins.