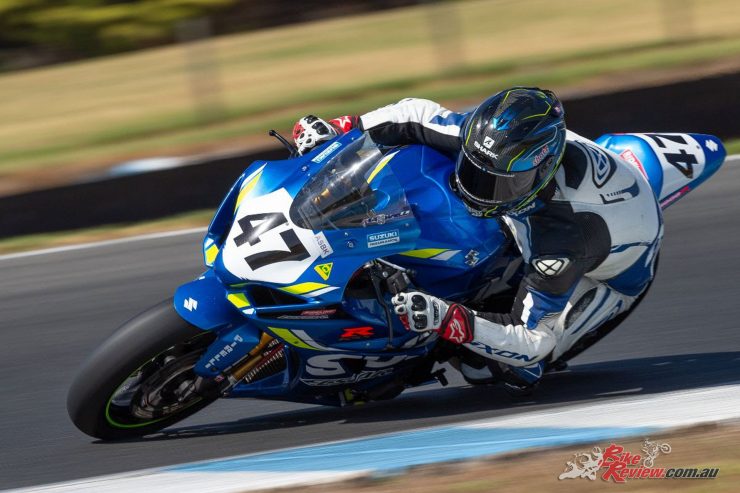 Another day of non-stop action at Phillip Island for the second day of the Official Australian Superbike Championship (ASBK) Test saw competitors tested their setups and their commitment around ‘The Island’s’ four and a half kilometre layout in 30-plus degree heat.

As the engines kicked over and the visors went down, the riders steeled themselves for a crucial day of testing, their last chance to get the bikes fine tuned before they return to ‘The Island’ on 21-24 February.

Track temperatures reached over 60 degrees ensuring that there would be plenty of grip available to the riders. This would mean that yesterday’s times didn’t really stand a chance as the riders put the hammer down and fought for bragging rights.

Repaired collarbone and all, Wayne Maxwell (Team Suzuki ECSTAR, Suzuki GSX-R EL R) could simply not be beat upon the close of Day Two of the Official ASBK Test. Maxwell finished the day with a top lap time of 1:32.312, picking up the pace from yesterday’s time by .601! 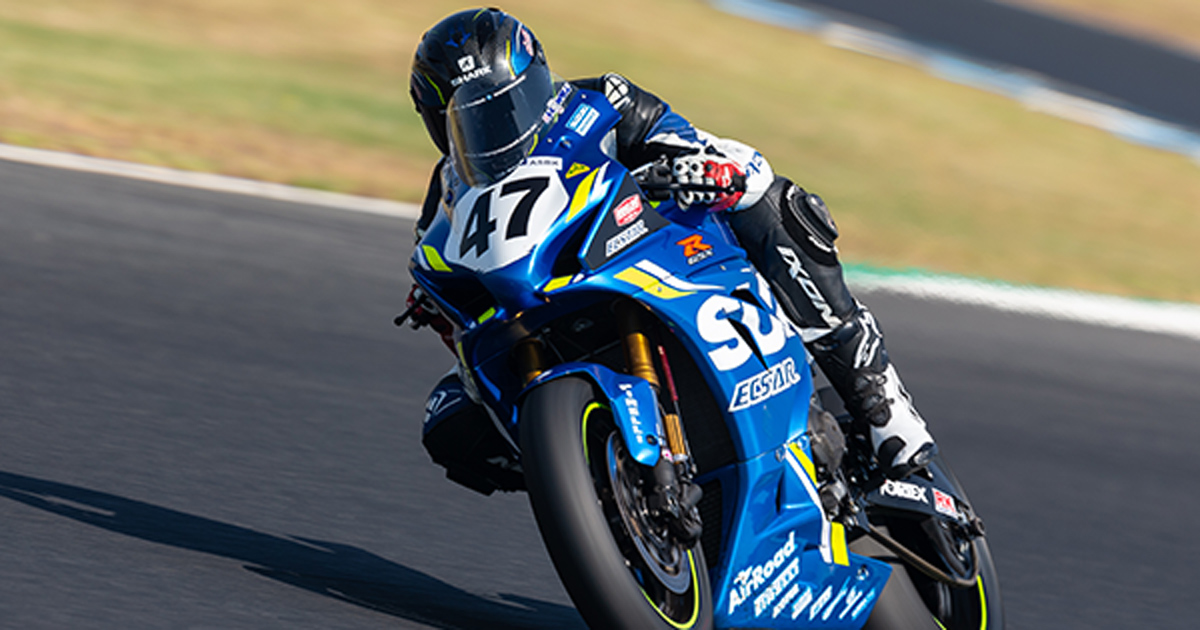 Clocking in with the second fastest time of 1:32.451 and leading the pack continuously throughout the day’s practice sessions was Aiden Wagner (Yamaha YZF-R1), who is making a triumphant return to the ASBK paddock in the lead up to a highly anticipated Round 1.

Reflecting on the weekend, Maxwell stated; “I’m really enjoying the ride on the Suzuki GSX-R. It’s solid on the track which I found quite daunting to begin with, but once I got my head around the bike and adapted my style everything went smoothly. I’m not letting the expectation and hype get to my head. Instead I’m just trying to take a slow approach to the start of the season and enjoy the new team and bike. This weekend has really helped the team find the right direction moving, so we’re feeling really positive moving into Round 1!”

Landing in third behind Wagner today was legend Troy Bayliss (Ducati Panigale FE), with a fastest time of 1:32.631. Hot on Bayliss’ heels to secure the fourth fastest lap time for Day Two was Josh Waters (Team Suzuki ECSTAR, Suzuki GSX-R EL R), clocking in with a 1:32.676.

Rounding out the top five was Daniel Falzon (Yamaha Racing Team, Yamaha YZF-R1), who appeared frequently at the front of the leading pack throughout today’s practice sessions. Falzon finished today with a best time of 1:32.784.

If Tom Toparis was in intimidating form yesterday, then today he was untouchable. Already down into the 1:35’s by lunchtime, Toparis (1:35.295) pushed his Landbridge Yamaha almost two seconds clear of second placed Nic Liminton (1:37.273) who despite improving as the weekend progressed still didn’t have the pace to catch the World Supersport wild card rider. 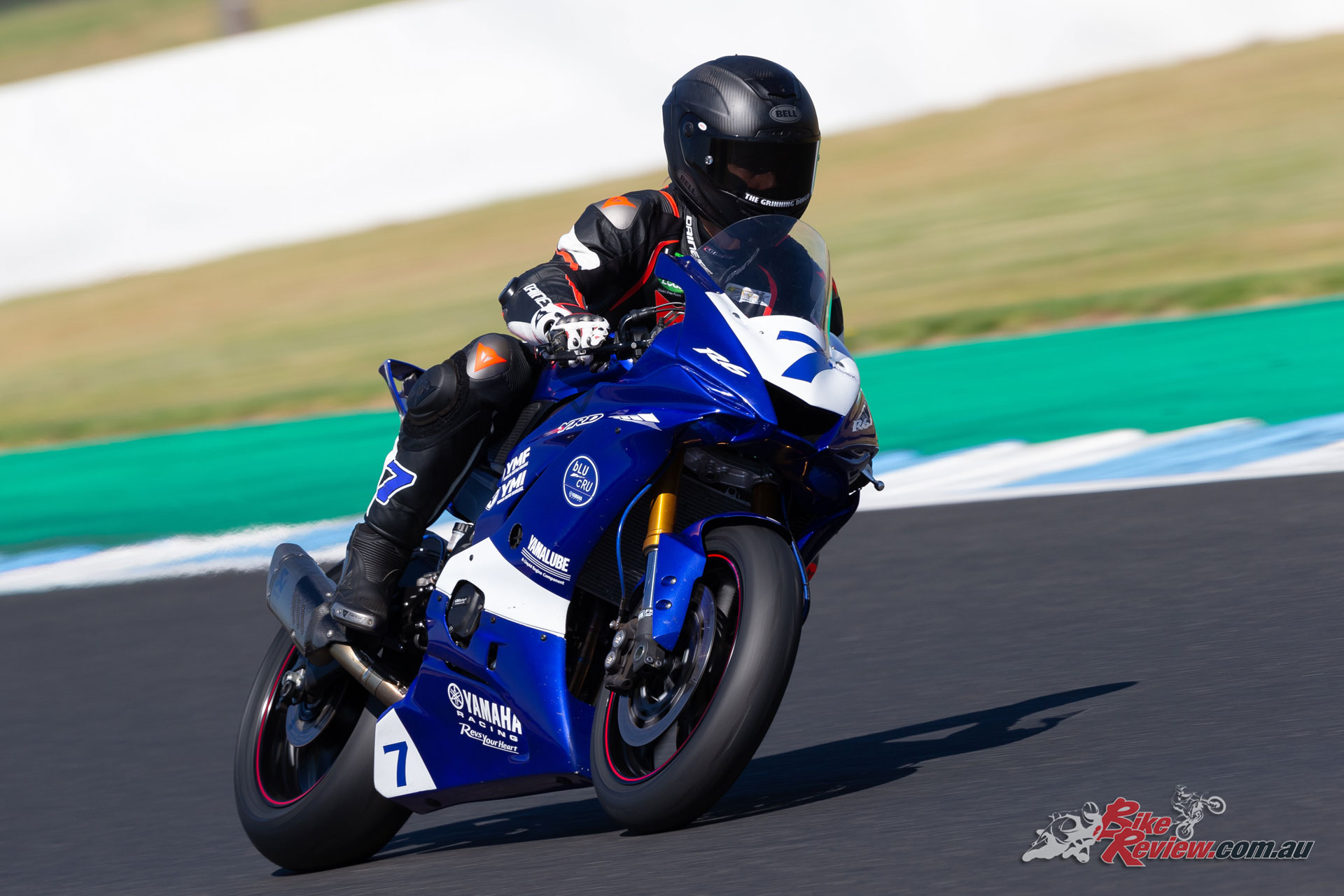 “Good couple of days, first real time at the island on the R6, so super comfortable after the two days and really looking forward to getting to the races.” Said Toparis. “We’re doing the World Supersport wildcard (this year) so we’ll have two days of testing down her during that week, and I think we’ll be able to find a little bit more. Hopefully we can repeat the weekend we had here last year”

After a weekend’s worth of trying, Oli Bayliss finally managed to crack the top three for the second and third sessions of the day despite reportedly clipping a stray bird whilst out on track. He finished the weekend in third position behind Liminton and Toparis in what was a superb improvement from yesterday.

Fighting it out for best of the rest all weekend was Broc Pearson and Reid Battye, who were consistently in the top five runners all weekend. Pearson ended the weekend on a 1:37.588 to leave him in fourth, while Battye could only manage a 1:38.142 which left him fifth.

Aidan Hayes and Territorian Sam Lambert managed to dip into the top five in the morning however couldn’t seem to match the top three for pace on a consistent basis. Pearson (1:37.588) ended up fifth and Lambert (1:38.134) ended the weekend in sixth.

Coming out of the pits like a demon behind the handlebars, Seth Crump (Rockoil, KTM RC 390) took out the fastest lap time for the YMI Supersport 300 and YMF R3 Cup class for Day Two of the Official ASBK Test. 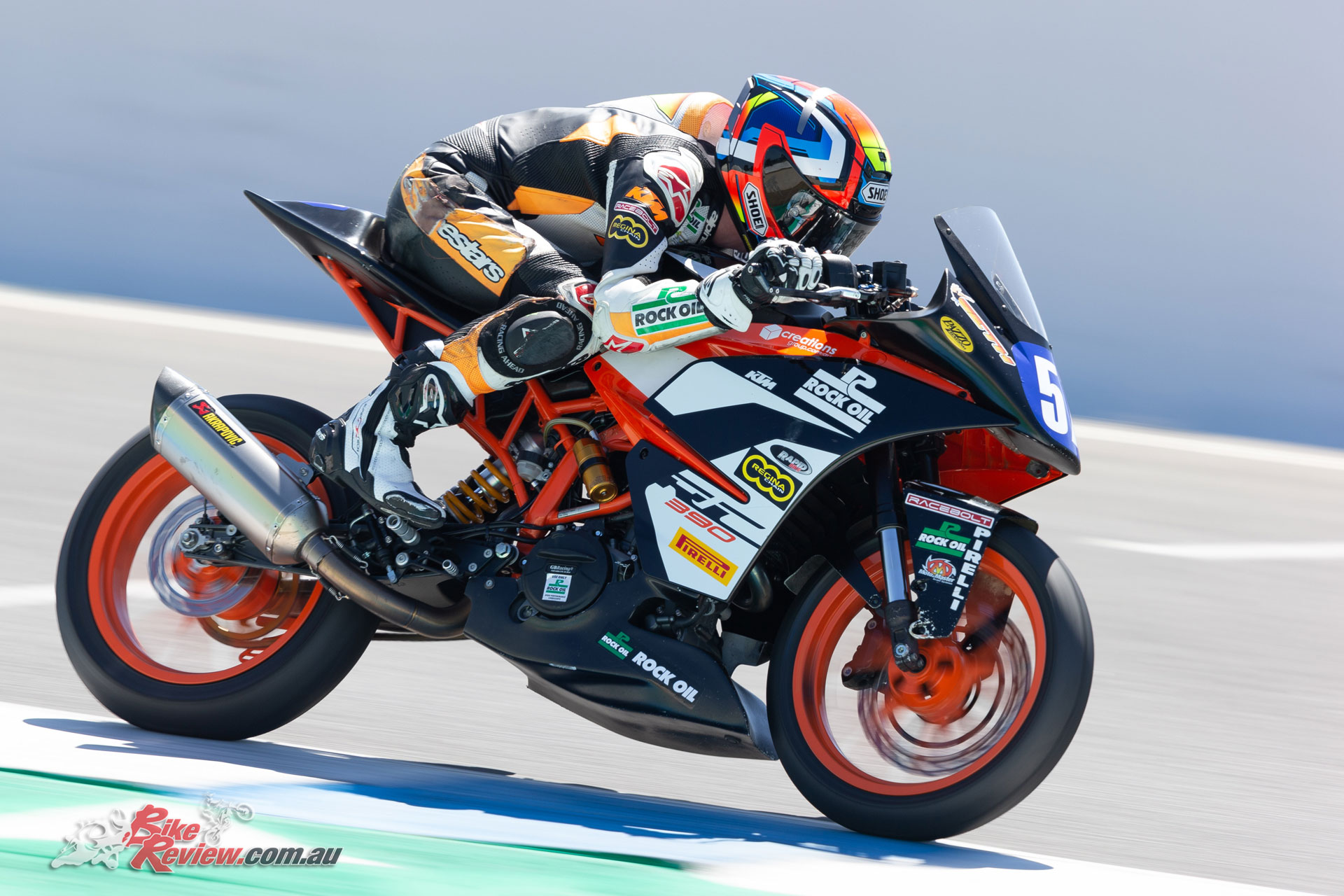 Third fastest for today was Senna Agius (Kawasaki Ninja 400) with a time of 1:49.581. Agius has been riding comfortably with the leading pack all day, appearing in the top three places for each of his four practice sessions. Breathing down Agius’ neck and trailing by a mere .36 seconds was Max Stauffer (Yamaha, Yamaha R3 321), with the fourth fastest time of 1:49.617.

Clearly the most enthusiastic racers of the day were the Oceania Junior Cup riders. Without fail at the horn signalling 30 seconds before the start of their sessions, almost the entire field was sat at the end of the pitlane with engines revving excitedly. As the pitlane opened and the sessions began the youngsters would crank the throttle wide open and swarm out of pit exit, anxious to make the most of every second of their fifteen minutes on track. 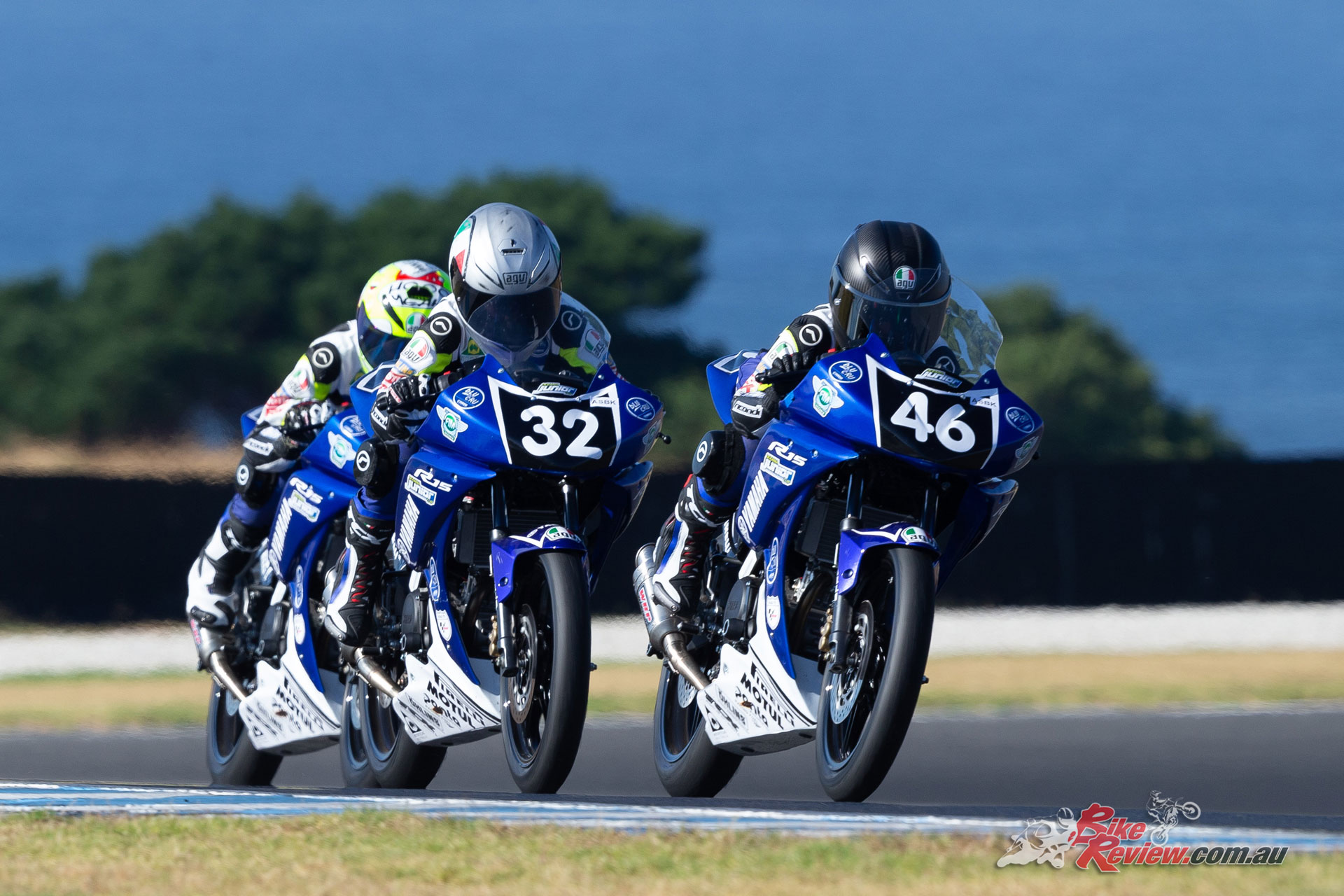 The action was akin to a mini Moto3 race, with bunches of six and seven riders having five lap long drafting chains exciting enough to draw a few of the top class riders out of the pit garages for a look at the action. By the time the weekend finished it was Queensland’s Max Gibbons who came out on top, setting a impressive 2:14.375 to take fastest of the day, followed by Carter Thompson (2:14.835), Archie McDonald (2:14.897), New Zealand’s Cormac Buchanan (2:14.957), and Angus Grenfell (2:15.082).

Rider coach Damien Cudlin was thrilled with the performance of the bLU cRU Oceania Junior Cup riders saying, “So far it’s been a really positive test, I think the kids have all really enjoyed themselves, they’ve learnt a whole lot. They’ve really surprised me and I think a lot of people in the pitlane with how professional they’ve been and how well they’re riding already, so I’m even more excited to see them in their first race.”

The young racers’ next outing is at Wakefield Park, where the Junior Road Race Academy will go racing for real with the first-ever Oceania Junior Cup round joining Round 2 of ASBK. If this weekend’s performance is anything to go by, these young talented riders will be itching to be the first to stamp their name on the series and will be providing us with some absolutely thrilling racing.

The end of official testing sees the beginning of the countdown to Round 1 of the season, when we return to Phillip Island on 21-24 February 2019.