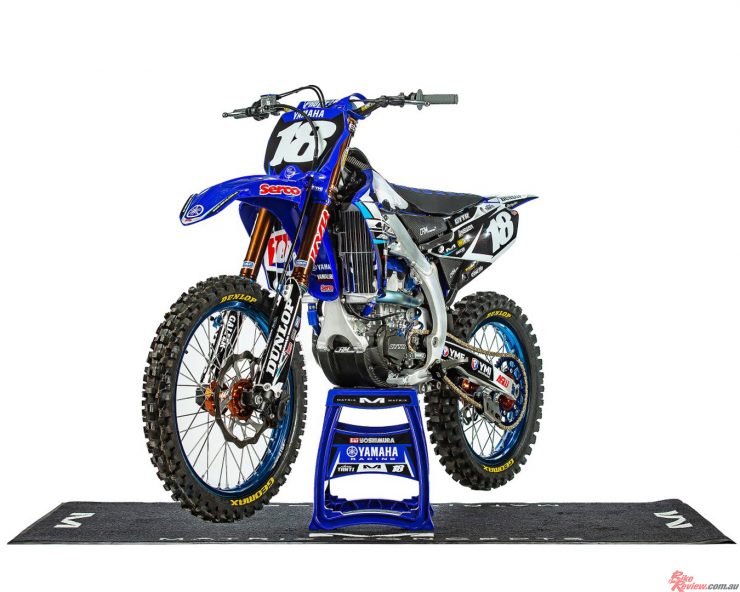 Aaron Tanti has established himself as one of the nations best 250 riders and results over the past few seasons prove he is a serious threat in any championship he lines up in. He has gone from a full privateer, working a full time job, to a factory rider racing full time in just a few years.

He signed with the Serco Yamaha team at the start of the 2019 season and rewarded them with top five results ever since. He is back for the 2020 season and even though the racing has been slowed with the COVID pandemic, both Aaron and his Serco Yamaha team have been working hard to develop and fine tune his bike, ready for when the national motocross championships commence.

In House
Being the importer of several performance products, Serco Yamaha have quick and easy access to many of the parts and components that are on their race bikes. Also owning a machine shop gives them the opportunity to develop or make any special items required or requested. This ability to not only source and import but manufacture items can be a real bonus for any team.

Starting from the Top
Aaron runs a Pro Taper SX Race bend bar mounted on to EZE triple clamps. The clamps are lighter and offer more flex than the OEM units and allow Aaron to have the exact egonomic layout he wants. It’s all finished off with Pro Taper full diamond pattern grips.

Aaron also runs a taller seat form to get him in a more aggressive position on the bike and then mates it to a Factory Effex gripper seat cover to keep him there. 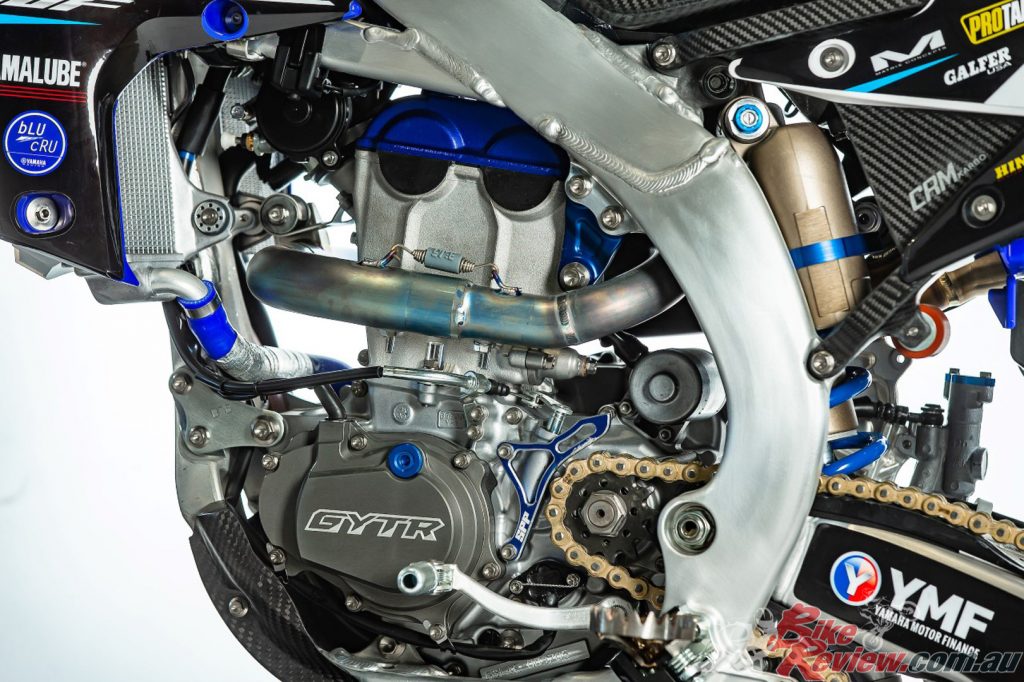 Motor
The standard YZ250F motor has been the benchmark in the 250 class for some time now. Other motors might have more power high in the rpm but lack the torque and bottom end pull required for MX. Other brands might have plenty of grunt, but not over rev, where as the YZ has the best of both worlds and right out of the box, its fast and competitive with anything on the track.

But Serco make it better! The head is flowed to increase power, matched to a high compression GYTR piston but still retaining the OEM cams. The motor is controlled by a Vortex X10 ECU that has 10 optional maps as well as clicker adjustments for low mid and high rpm. The exhaust is a Yoshimura and the tight relationship between Serco Yamaha and Yoshimura allows each company to pass on plenty of information to assist each other’s final product. 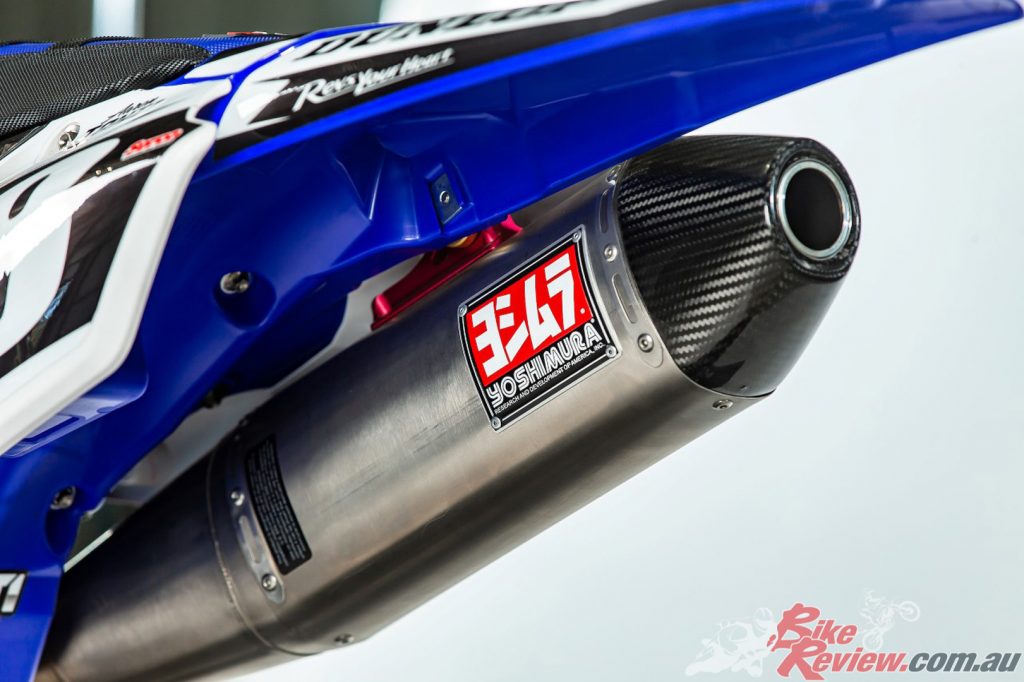 A Yoshimura exhaust can be seen at the rear end of Tanti’s ride.

Needs Air
Maybe the biggest gain in the YZ250F motor can be found by getting clean air into it. Increasing air flow and air purity into the YZ250F motor significantly increases power and as a result, Serco Yamaha have put plenty of time into this.

The team recently acquired the CRM carbon air box lid, which is the same used by the factory Wilvo Yamaha team in the MXGP’s. Below that is a No Toil air flow kit that has the screen removed and a cleaner designed air filter to increase air flow. Matched to a YZ450F airboot, the greater volume of the boot gives the bike more power high in the rpm range. 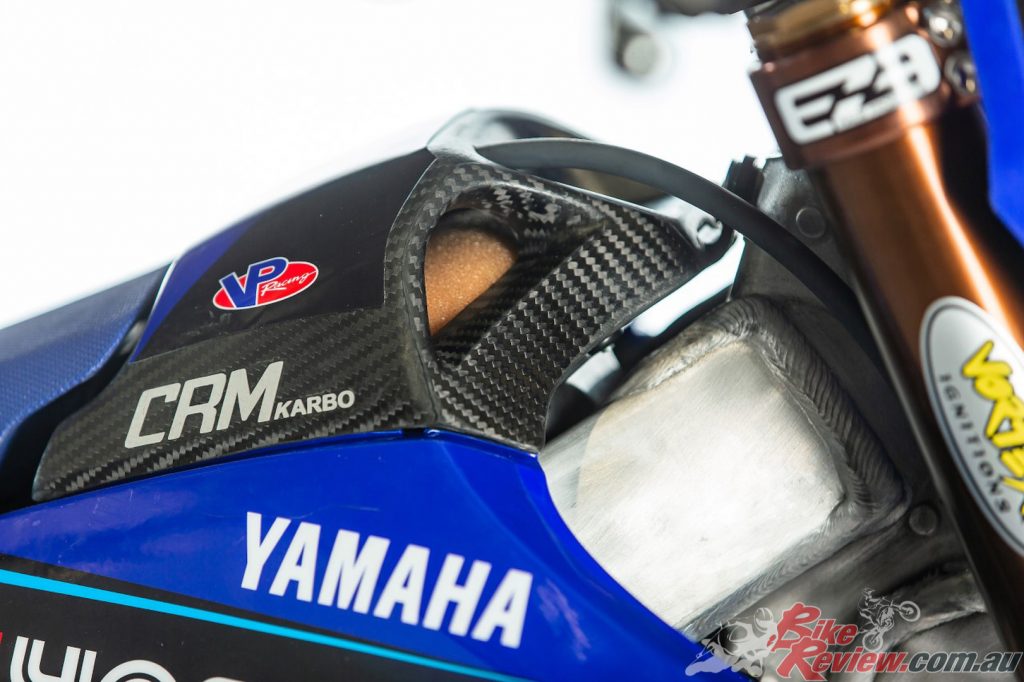 All this is washed down with VP Roo 100 race fuel.

Adding up the gains from the mechanical changes (head, piston), the increased air flow (lid, no screen/ larger airboot) as well as the electronics and fuel, Serco Yamaha has made a significant power increase right across the board and around a 20% gain over standard. That’s a powerful YZ250F. 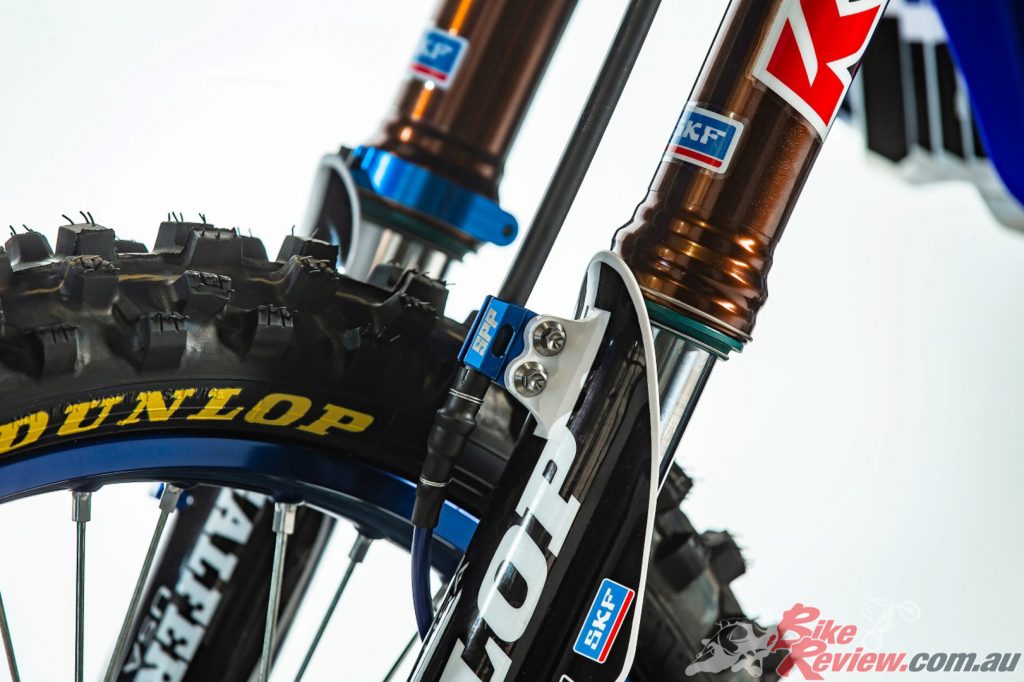 Getting a handle on it
Now while its all well and good to bump up the horsepower, making it work on the track is even a bigger task and Serco have left no stone unturned in that regard. Suspension is valved in house by team tech, Ben Dutton, using KYB components as well as some no stick suspension coatings and SKF seals. Ben has worked with Aaron for the past 18 months and they both have a good understanding of what’s required from the bike when Aaron is on song.

The valving would be considerably firmer across the board as well as spring rates increased to handle the weight, speed and style of Tanti. The team have also just recently invested in a few more things to improve the handling. The EZE triple clamps improve the front end feel while Aaron also runs an EZE shock linkage which is 1mm longer that lowers the rear and allows the bike to hook up better. 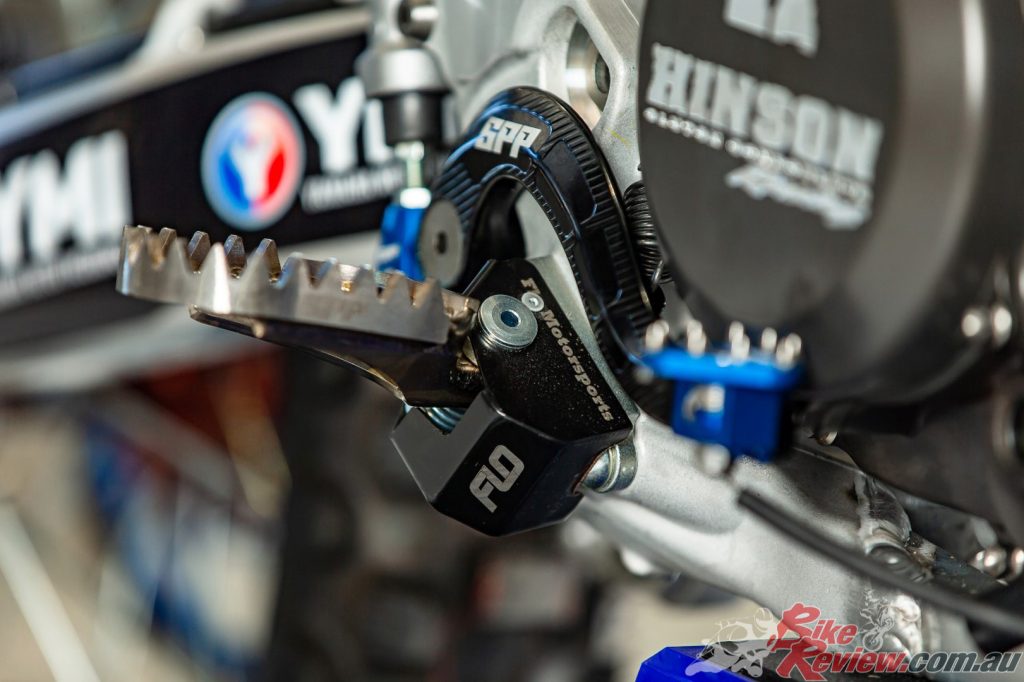 Serco’s own in house brand, SPP, are also well represented on the bike and give it the extra bling factor.

The Small Things
Looking over the Serco Yamaha YZ250F, there are a number of things that can take your eye. One of the team’s technicians, Paul Teasedale, is from the UK and has plenty of connections in the MXGP paddock and as a result, he can source several things. The CRM carbon products come via Paul and the amount on the bike is significant.

The sub frame is carbon, as is the tank, skid plate, the exhaust shields as well as several other smaller protective pieces scattered across the bike. Carbon saves weight and another benefit is that it’s doesn’t add rigidity to the bike like a metal skid plate could. Another weight saver is the Ti bolt kit. 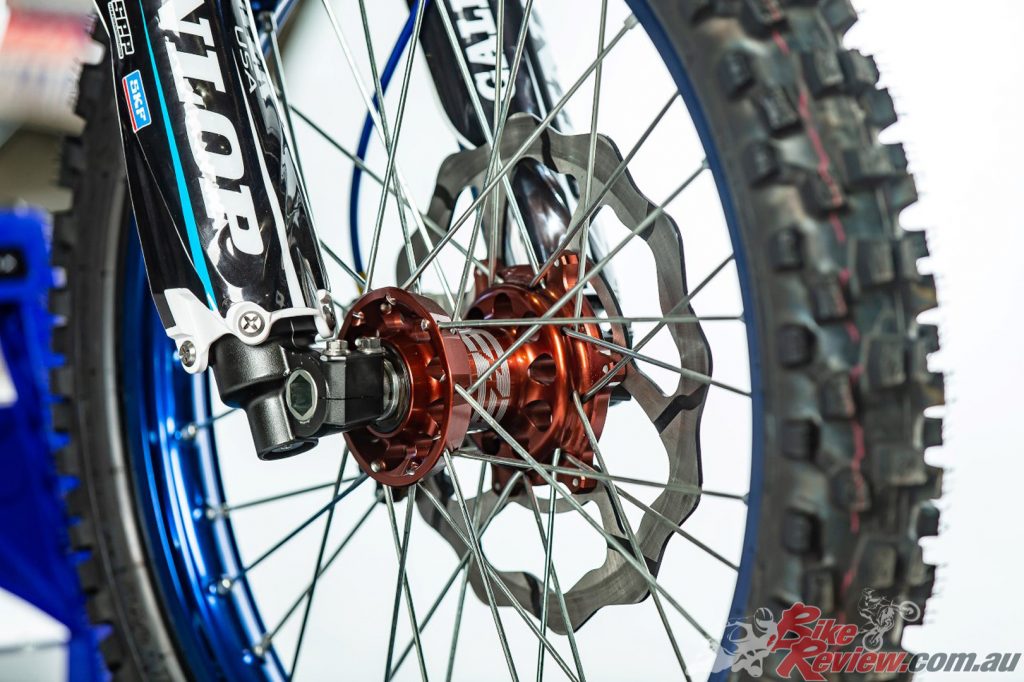 The front disc is a Galfer 280mm rotor for better braking performance.

The wheels run DID rims laced to EZE hubs and Dunlop development tyres. The front disc is a Galfer 280mm rotor for some extra pucker power, while the OEM rotor is retained on the rear wheel.

Serco’s own in house brand, SPP, are also well represented on the bike and give it the extra bling factor. From the oil filter cover, to the rear brake pedal and the axle blocks, the shiny anodised colours make the bike pop and set it apart from the others.

The wheels run DID rims laced to EZE hubs and Dunlop development tyres. The brake rotor on the rear is OEM.

On Track
“The bikes at Serco have always been good,” comments Aaron, “but this year we changed a few things and have made a good step forward with both the motor and suspension. We have been able to find more power in the right areas, as well as improve the handling both via testing with Ben but also some of the components we used.

“When I head to the start line, I have no question I’m on the best bike in the field and its just up to me to ride it properly and bring home the best results I can,” Tanti ends.