The WorldSBK Championship descended on the Circuito San Juan Villicum, Argentina and it was Toprak Razgatlioglu (Pata Yamaha with Brixx WorldSBK) who claimed race one honours after a 21-lap encounter after transferring his scintillating Friday pace into Saturday action. 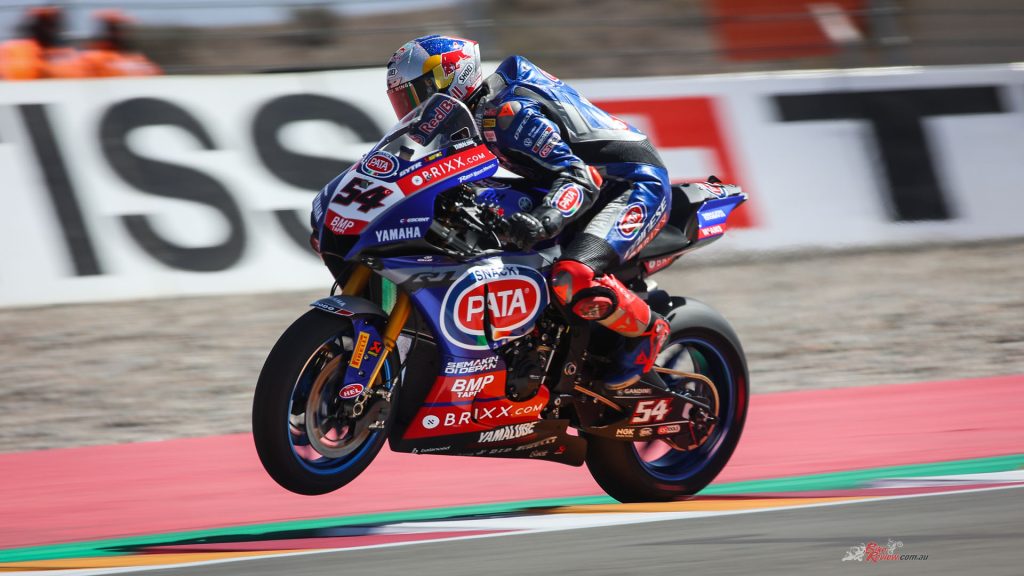 Both Razgatlioglu and Jonathan Rea (Kawasaki Racing Team WorldSBK), decorated in a special 1990s livery to mark a special anniversary for Kawasaki, got quick starts from second and fifth on the grid respectively to lead the race into turn one, while polesitter Scott Redding (Aruba.it Racing – Ducati) found himself on the ground at the first turn after crashing, with the Briton falling to the back of the grid.

Out in front and Rea had put pressure on Razgatlioglu for the lead of the race before the championship leader opened up the gap to Rea to just over three seconds at the end of lap eight, with the pair holding station until the end of the race. Razgatlioglu’s win meant he claimed the 50th podium of his career while Yamaha claimed their first podium at San Juan Villicum. Rea’s second place meant he claimed Great Britain’s 810th podium, while it was only the second time Rea has not won at Argentina. 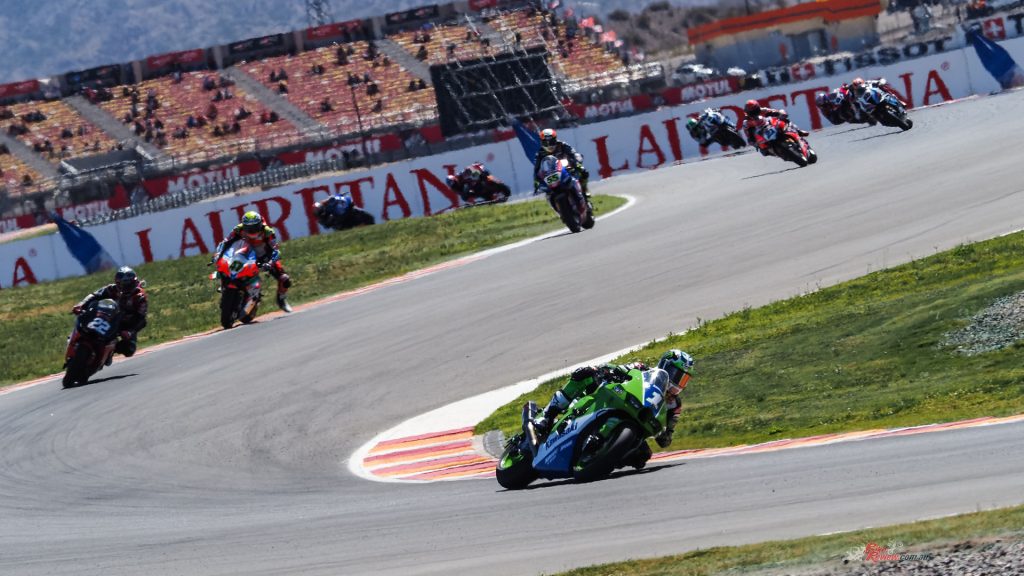 Michael Ruben Rinaldi (Aruba.it Racing – Ducati) claimed the tenth podium of his WorldSBK career with third place after passing Axel Bassani (Motocorsa Racing) at around half-distance of the race. Bassani had started from the front row for the first time in his WorldSBK career but fell back at the start before fighting back into third, before Rinaldi was able to pass him. Rinaldi’s podium was Ducati’s 980th podium in WorldSBK.

The battle for fourth raged on between Bassani and Alex Lowes (Kawasaki Racing Team WorldSBK), with Lowes, using a Top Gun-inspired livery to mark Kawasaki’s 125th anniversary, making the move through turns six and seven to move into fourth before fending off the Ducati rider down the back straight into turn eight, with Lowes finishing in fourth place and Bassani in fifth. 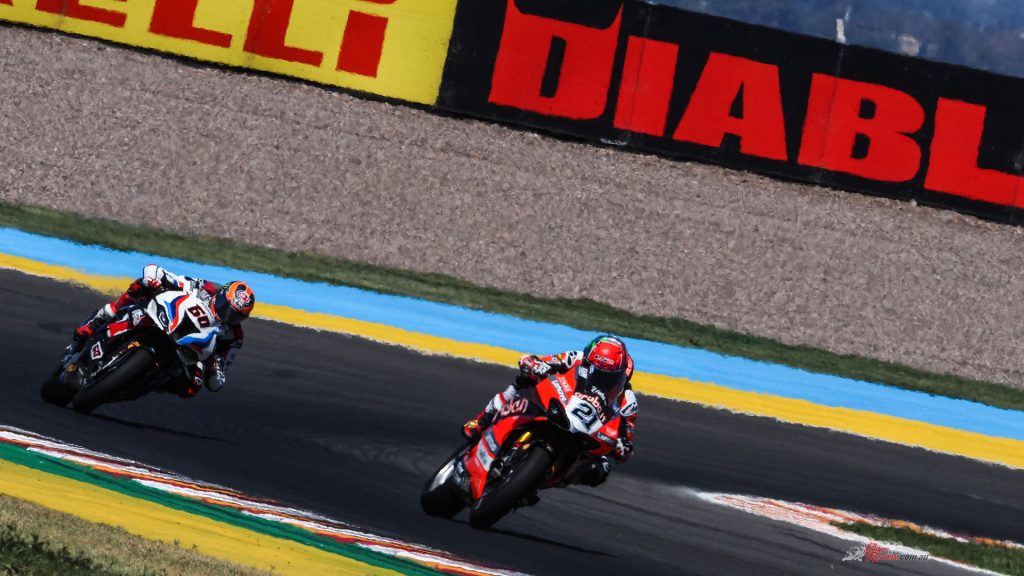 Andrea Locatelli (Pata Yamaha with Brixx WorldSBK) was another who had a strong start as the lights went out but soon found himself falling back down the order as he battled with Michael van der Mark (BMW Motorrad WorldSBK Team) and Garrett Gerloff (GRT Yamaha WorldSBK); with the Dutchman claiming sixth place and Gerloff seventh. Locatelli ended the race in eighth place after starting from sixth place.

Redding ended the 21-lap race in ninth place after battling his way back from the back of the field after his turn one spill, passing numerous riders to secure a top-ten finish despite the early setback, with Leon Haslam (Team HRC) rounding out the top ten after withstanding late challenges from his rivals but unable to keep Redding behind. 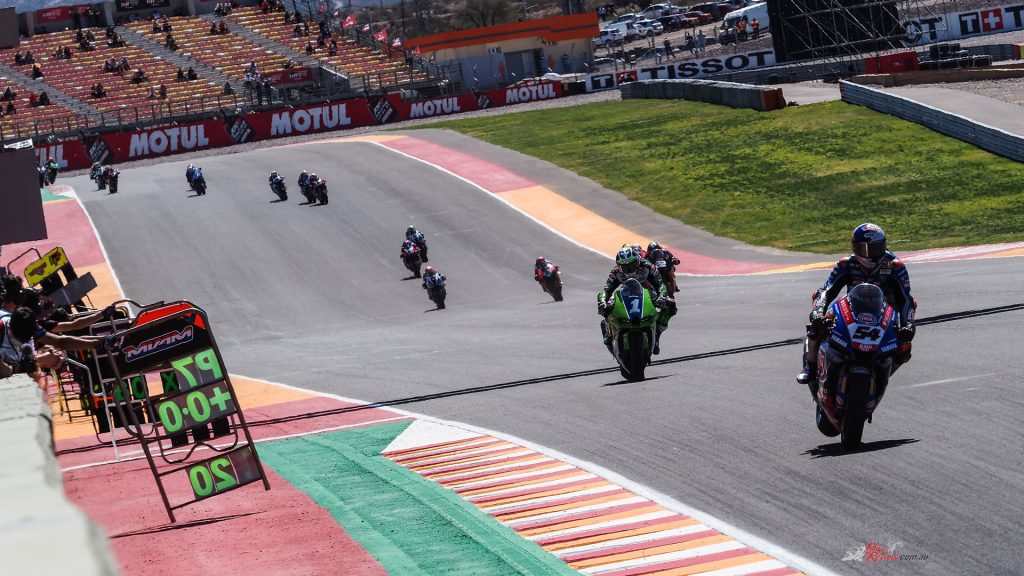 Tito Rabat (Kawasaki Puccetti Racing) claimed 11th place in only his second round onboard Kawasaki machinery, finishing almost two seconds clear of Chaz Davies (Team GoEleven) who finished in 12th place. Irish rider Eugene Laverty (BMW Motorrad WorldSBK Team) moved up the order at the start of the race but fell back as the 21-lap progressed, eventually coming home in 13th place.

It was a strong showing for Samuele Cavalieri (Barni Racing Team) as he looked to claim his first top-ten finish in WorldSBK, but a late trip through the gravel meant he fell down to 14th place, four seconds behind Laverty. Japanese rookie Kohta Nozane (GRT Yamaha WorldSBK Team) claimed the final points-paying position with 15th place. 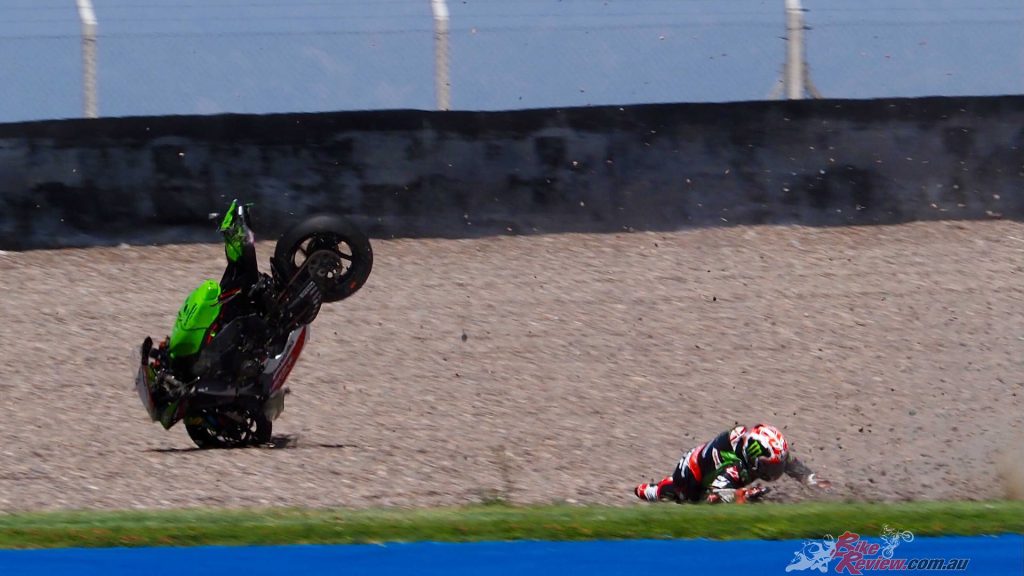 Alvaro Bautista (Team HRC) was the first retirement of the race after he had a crash at turn four on the third lap of the race. Isaac Viñales (Orelac Racing VerdNatura) had shown strong pace throughout the weekend but retired from race one after an early trip into the gravel at turn seven; although he did re-join the race, he retired in the second half.

Tissot Superpole Race
The MOTUL FIM Superbike World Championship continued to thrill throughout the Motul Argentinean Round as the 10-lap Tissot Superpole Race was decided by a drag race to the finish line at the Circuito San Juan Villicum with Toprak Razgatlioglu (Pata Yamaha with Brixx WorldSBK) and Scott Redding (Aruba.it Racing – Ducati) dicing it out for Superpole Race honours. 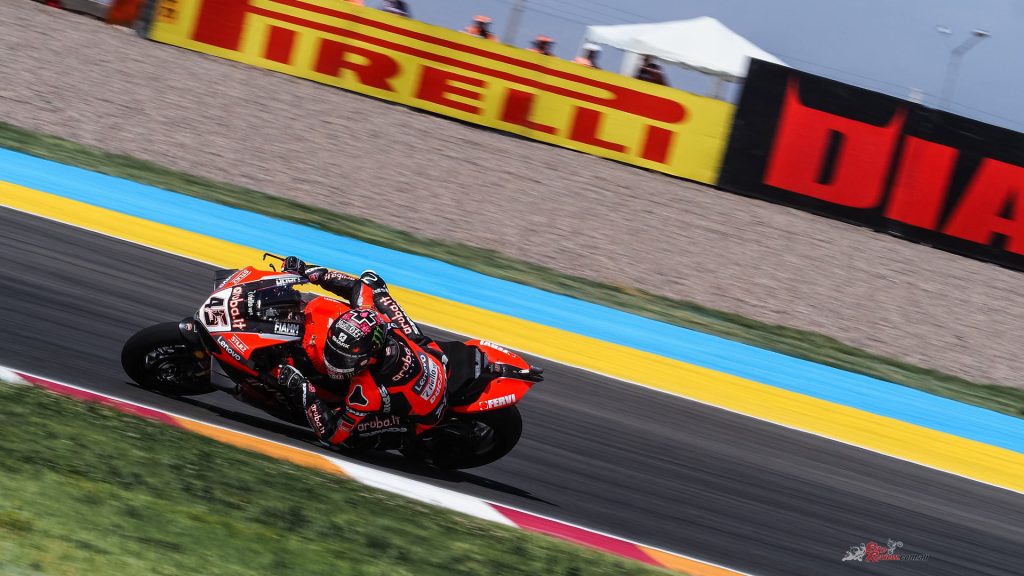 At the end of lap three, Redding lost ground to Razgatlioglu after running wide at the final corner, allowing Rea to put pressure on the Ducati rider while the Turkish star was able to extend his lead at the front of the field. Redding was able to spend a few laps recovering the time to Razgatlioglu before putting pressure on the race leader with the battling right until the line; Redding looking to make a move into turn six and seven but Razgatlioglu responded to hold on to the line by just 0.046s. Razgatlioglu claimed his 13th win of 2021 with Yamaha taking their 350th podium placement. Redding claimed second for his 20th podium this campaign with Rea settling for third; the trio starting race two from the front row.

As in Saturday’s race one, Axel Bassani (Motocorsa Racing) lost ground at the start of the race but was able to fight back to claim fourth place, his best dry-weather result, in the Superpole Race after passing Alex Lowes (Kawasaki Racing Team WorldSBK) in lap three; Lowes would drop back to ninth in the closing stages of the race. Michael van der Mark (BMW Motorrad WorldSBK Team) and Andrea Locatelli (Pata Yamaha with Brixx WorldSBK) once again battled it out on track with the Dutchman coming out on top to claim fifth place, with Italian rookie Locatelli in sixth and one second back from van der Mark. 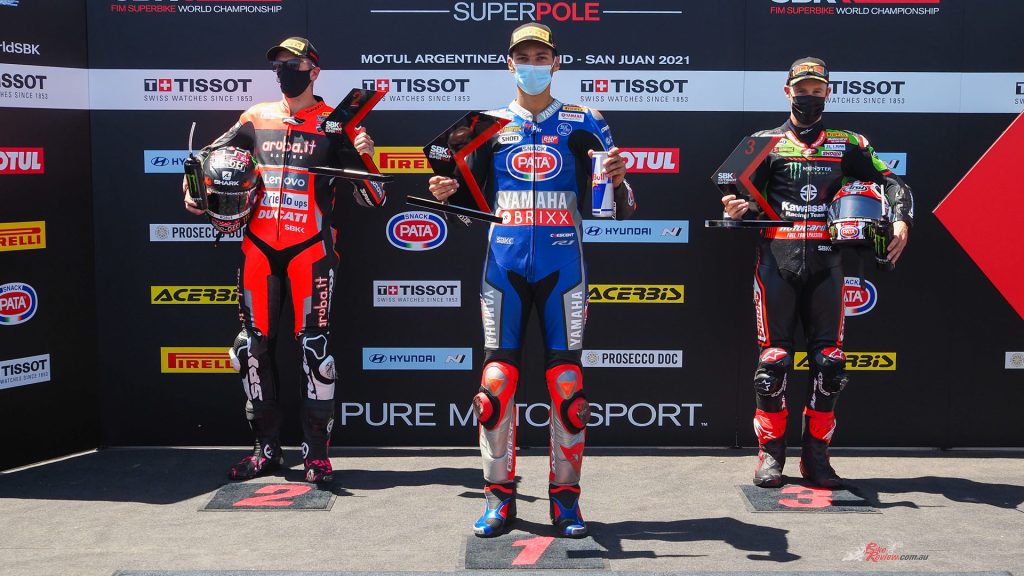 After topping warm-ip on Sunday morning, Garrett Gerloff (GRT Yamaha WorldSBK Team) claimed seventh place after making progress from his starting spot, with Michael Ruben Rinaldi (Aruba.it Racing – Ducati) in eighth place; the Italian had battled his way up the order before losing a couple of spots in the latter stages of the race. Lowes will complete the third row after finishing ninth.

The Turk now holds a 30 point lead over Rea  (531 to 501 points) with Redding back in third on 465 points, with the title-decider in the 2021 MOTUL FIM Superbike World Championship going down to the wire and to be decided at the final round,  a month away at Indonesia’s Mandalika International Street Circuit on November 19-21. 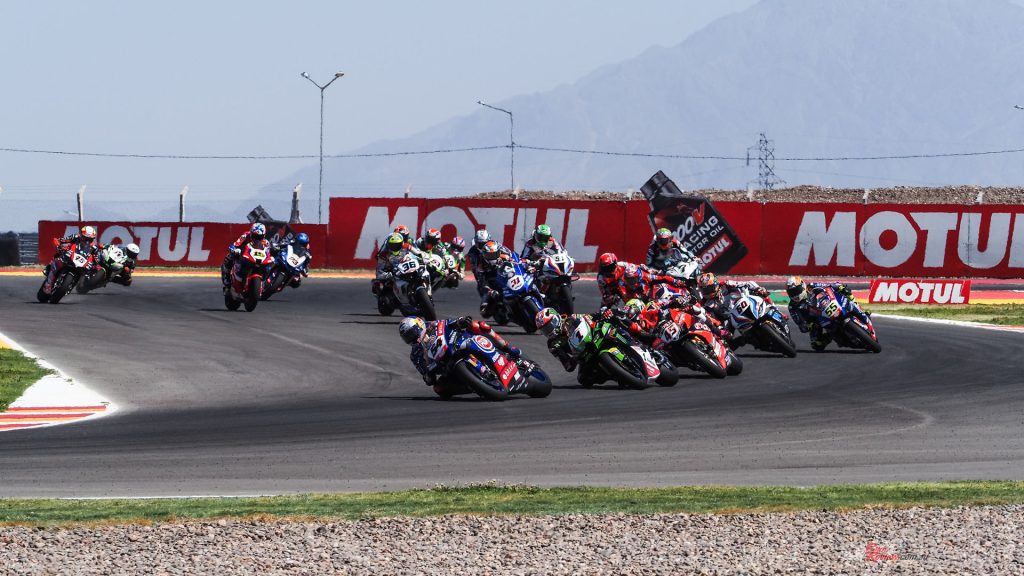 Jonathan Rea (Kawasaki Racing Team WorldSBK) got a good start from third on the grid while Toprak Razgatlioglu (Pata Yamaha with Brixx WorldSBK) led from pole position.  The pair battled through the first three laps, with Redding joining the fray, and Rea taking the lead briefly before being pushed down to third on the fourth lap of 21. On lap five, the Ducati star moved up to second with a pass on Rea before passing Razgatlioglu, while Axel Bassani (Motocorsa Racing) continued his strong form as he battled the championship’s top three for a podium position.

Rea was able to respond to move into second and looked to take the lead, but the Turkish star was able to resist the challenge on lap six.  At the start of lap nine, Redding made a move on Rea into turn one to move up into second place, with Razgatlioglu still out in front, although Redding did make a move into turn eight, with Razgatlioglu responding. 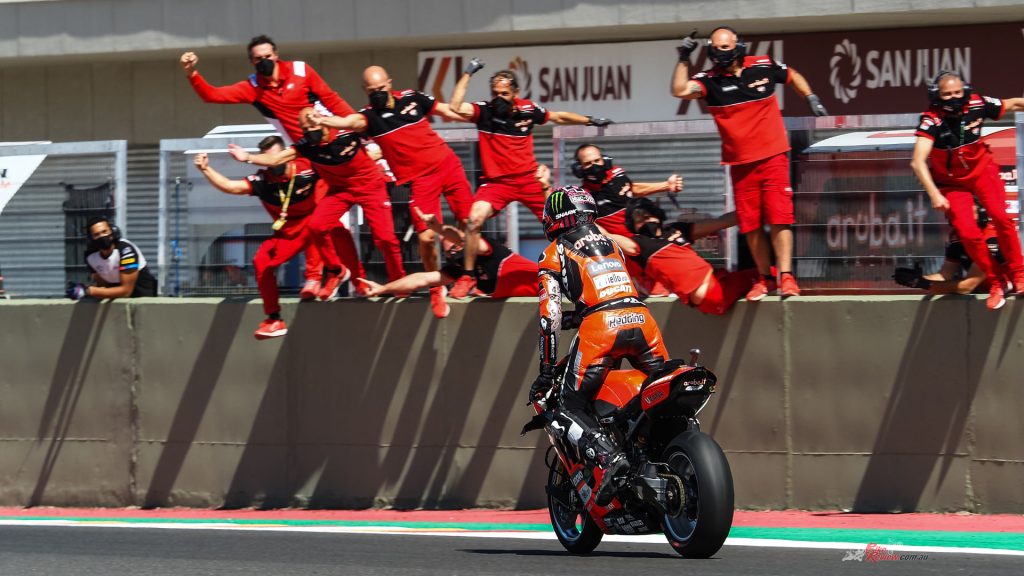 On lap ten at turn seven, Redding overtook Razgatlioglu to capture the lead, with Rea almost able to pass the Turkish star into Turn 8 but Razgatlioglu responded to keep second place. The move allowed Redding to escape the thrilling battles, with the fight between Razgatlioglu, Rea and Bassani continuing to heat up. 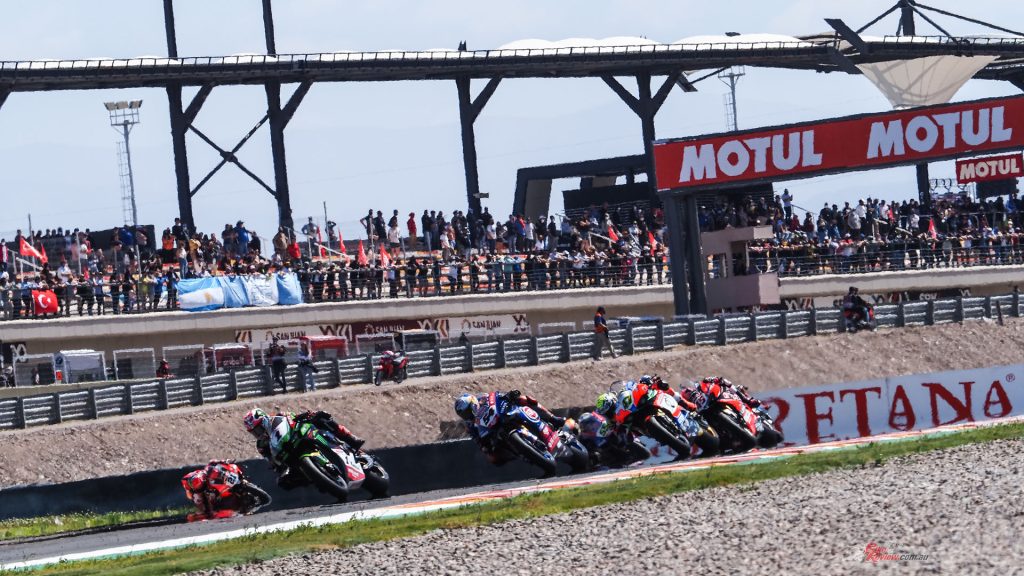 Bassani dropped away from the lead trio in the closing stages but still recorded fourth place after another excellent race for the Italian rookie as he withstood a late challenge from Ducati stablemate Michael Ruben Rinaldi (Aruba.it Racing – Ducati) by just half-a-second at the end of the 21-lap race. With the top four battling it out in the early stages, Michael van der Mark (BMW Motorrad WorldSBK Team) was running in the lead group with fifth place before he was passed by Rinaldi, eventually coming home in sixth place.

Yamaha stablemates Andrea Locatelli (Pata Yamaha with Brixx WorldSBK) and Garrett Gerloff (GRT Yamaha WorldSBK Team) finished in seventh and eighth respectively with American star Gerloff missing out in seventh spot by just three tenths at the end of the race. Despite missing out on seventh place, Gerloff’s points, coupled with teammate Kohta Nozane finishing in 14th place, was enough for GRT Yamaha to claim the Best Independent Teams’ title in 2021. 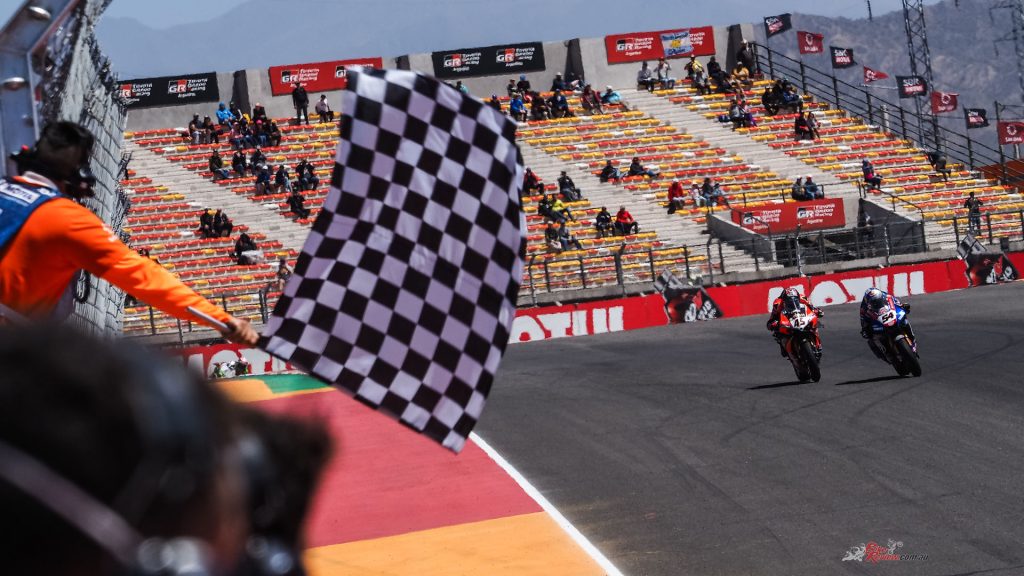 Chaz Davies (Team GoEleven) and Alvaro Bautista (Team HRC) battled it out for ninth place in the closing stages of the race with just eight tenths separating the duo as they crossed the line. Bautista, a race winner at San Juan for Ducati but making his first appearance on Honda machinery in Argentina, battled back from 15th place after missing out on a top-nine spot in the morning Tissot Superpole Race. 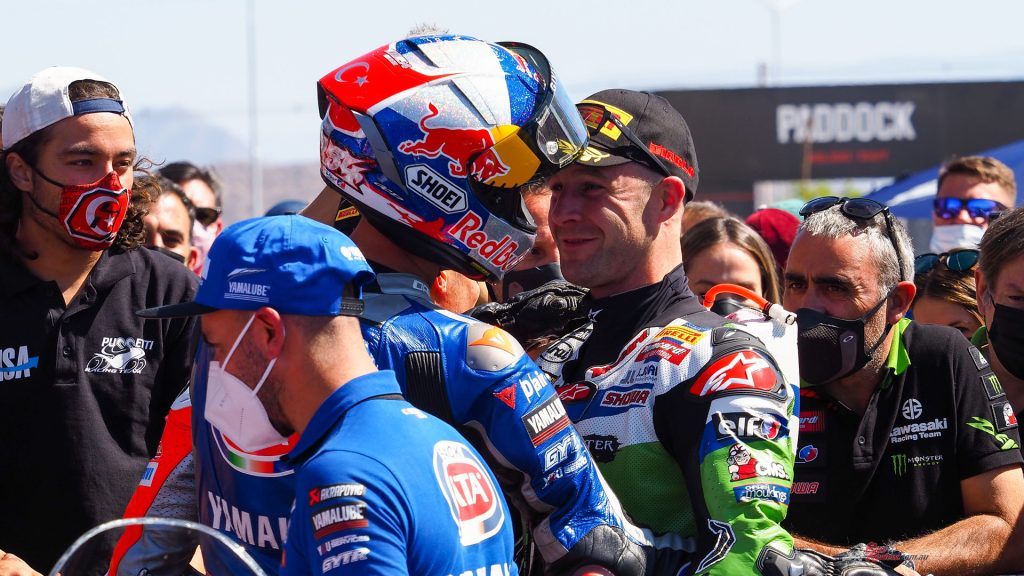