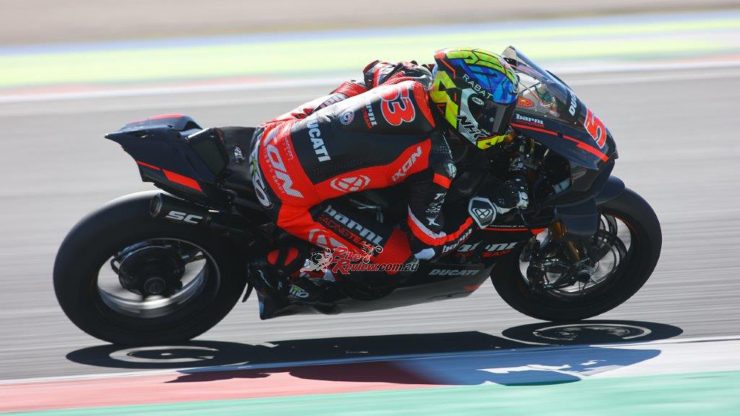 WSBK testing has been a success, now all the riders are eager to battle it out on the track. 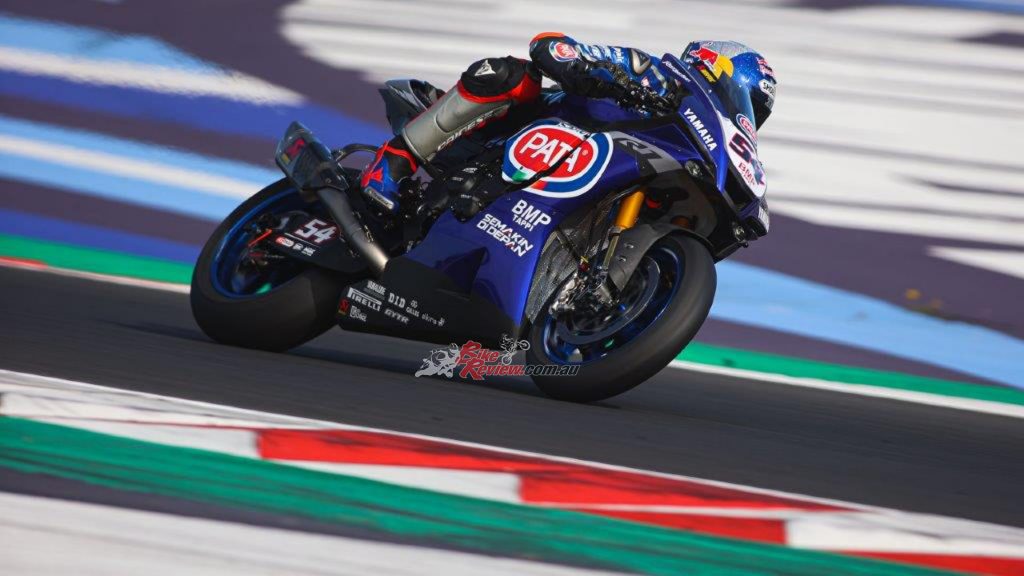 Toprak Razgatlioglu beat the race record set by Jonathan Rea back in 2015 at Missano.

DAY ONE: After going fastest in the morning session, Toprak Razgatlioglu continued his form throughout the afternoon. He posted a 1’34.265 – faster than the race lap record from Jonathan Rea when he set a 1’34.720 in race two in 2015 – as he continued to focus on turning and stopping his Yamaha YZF-R1, including new components on his machine.

Scott Redding was setting lap times close to the race lap record throughout the afternoon session, posting a 1’34.478 as he focussed on settling new components on his Ducati Panigale V4 R as well as checking details on the machine. 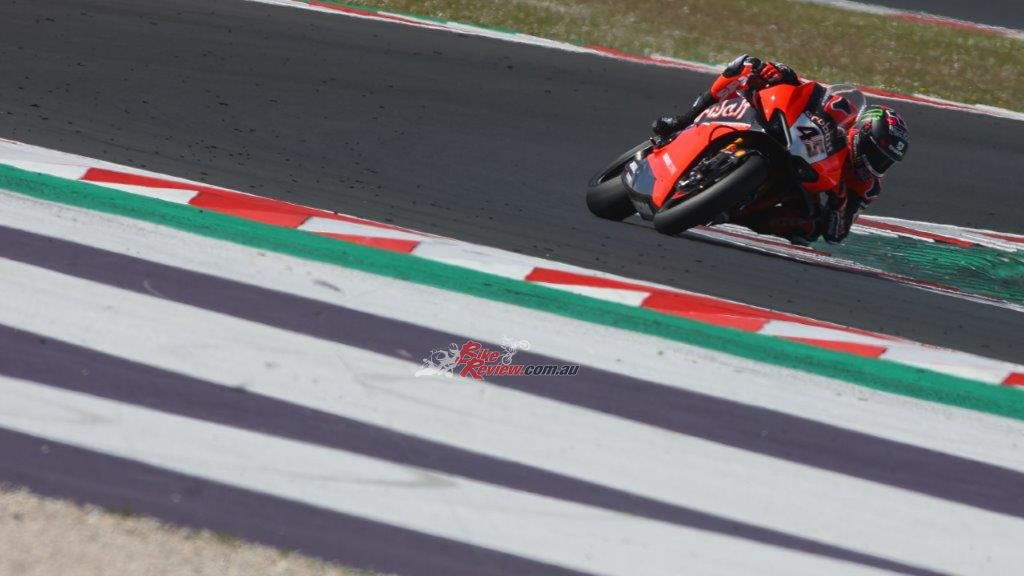 Scott Redding posted a 1’34.478, very close to the Yamaha of Toprak Razgatlioglu.

Redding was joined by Ducati’s new factory rider, Michael Ruben Rinaldi, with the young Italian working with his new team. Rinaldi posted a time of 1’34.609, a tenth away from his teammate as he completed 61 laps with Redding adding a further 77 to Ducati’s total – both riders under Rea’s record. Axel Bassani finished the standings in fourth place after completing 68 laps throughout the day as the youngest rider on the grid impressed with a 1’35.076.

Independent teams were also at the testing with satellite Yamaha team GRT Yamaha WorldSBK Team at Misano with American star Garrett Gerloff and rookie Kohta Nozane. Nozane’s machine was the cause of a red flag during the day when his bike came to a stop at turn 10. 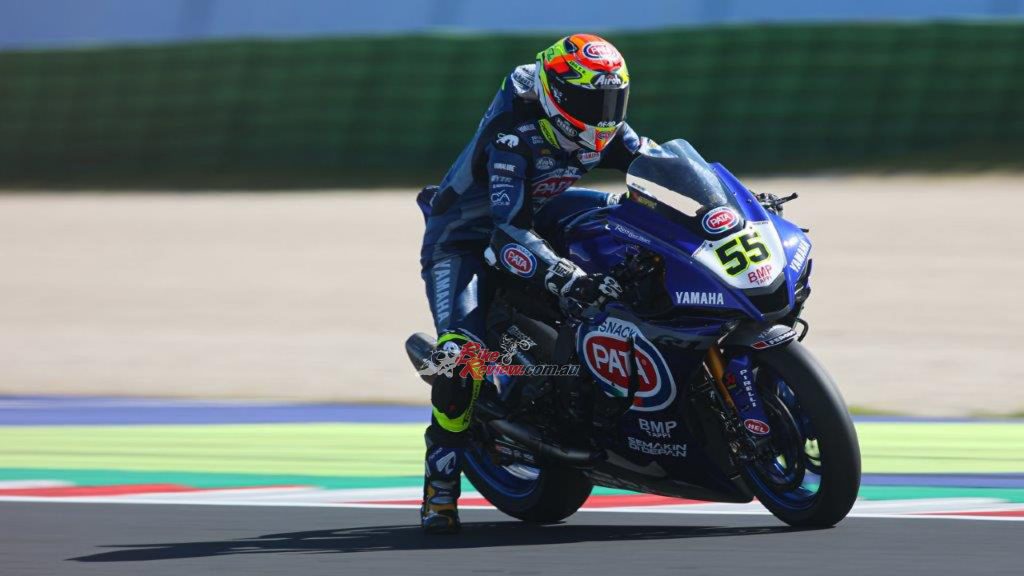 Andrea Locatelli couldn’t quite match the pace of his teammate, posting a 1’35.605 from his 75 laps.

Despite this setback, the reigning Japanese superbike champion was able to complete 57 laps with a best time of 1’36.523. For Gerloff, this test was a chance to continue building on a sensational rookie season where he claimed three podiums with the American posting a best lap of 1’35.253 after completing 34 laps.

Lucas Mahias took to the track following his move from WorldSSP to WorldSBK with the same team, as the Frenchman looks to embark on his first full year of WorldSBK. Using the 2020 Kawasaki ZX-10RR, Mahias completed 46 laps with a best time of a 1’35.849. Christophe Ponsson continued to get used to his new Yamaha machine with 57 laps across the day, setting a best time of 1’36.978. 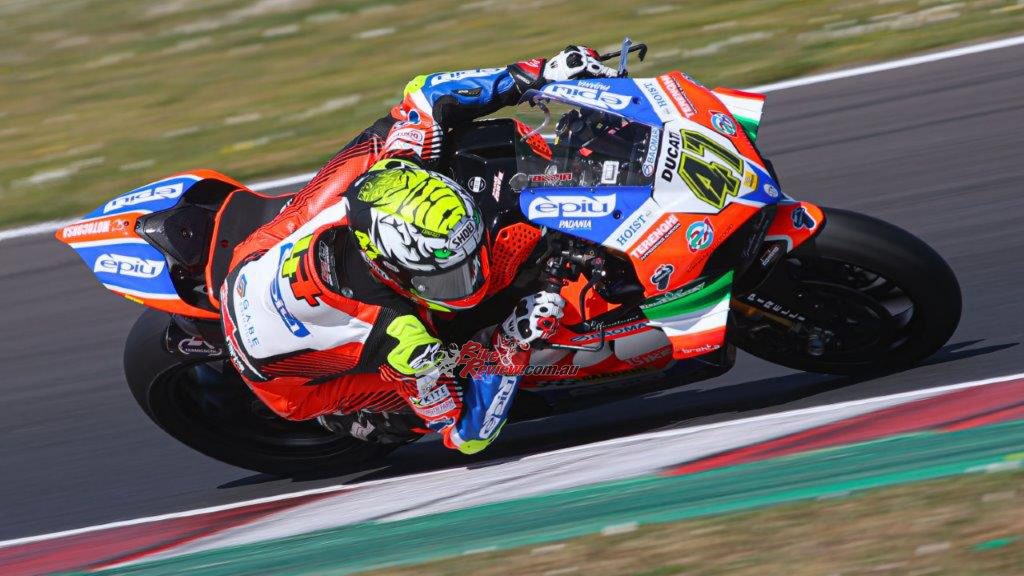 All of the Ducati teams put on a great show for their home crowds despite it just being a testing day.

All three Ducati satellite teams were present with Tito Rabat, and Michele Pirro joining Motocorsa Racing’s Bassani on track. Rabat’s best time was a 1’35.680, completing 93 laps, as he continues to adjust to WSBK following his switch from MotoGP, while Pirro was helping GoEleven continue their testing programme and completed 11 laps.

DAY TWO: After a thrilling two-day test welcomed new items and new looks for some riders, lap record pace was the call of the day as Michael Ruben Rinaldi dethroned Toprak Razgatlioglu…

The Misano World Circuit “Marco Simoncelli” hosted day two testing for the MOTUL FIM Superbike World Championship, as teams continued their preparations for a titanic tussle in the year ahead. Having led the way for much of the two days, Toprak Razgatlioglu (PATA Yamaha WorldSBK Team) was displaced at the top by Michael Ruben Rinaldi (Aruba.it Racing – Ducati) in the final two hours of the test, as the Italian star hit lap record pace. 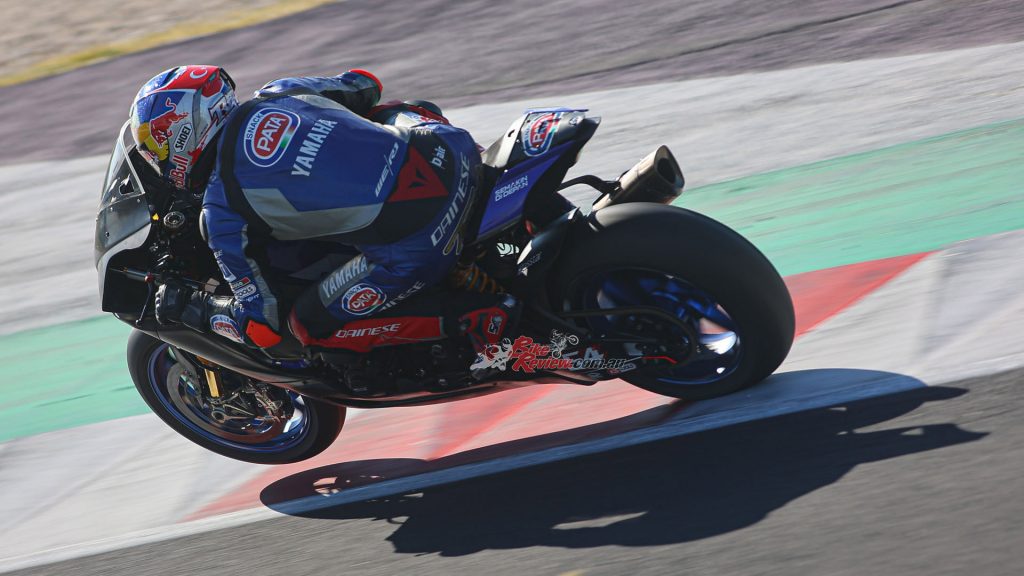 Over at the Aruba.it Racing – Ducati squad, Michael Ruben Rinaldi used the new front brake calipers and in the final hours of the test rocketed to the top, right on Tom Sykes’ Superpole lap record (1’33.640). Rinaldi had a crash in the afternoon at turn 8 but was uninjured. Scott Redding continued to work with the Ducati, trying out the new front brake calipers. Redding completed 64 laps at Misano, continuing to make progress on his way to fourth. 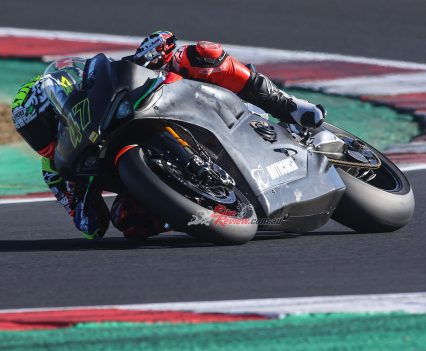 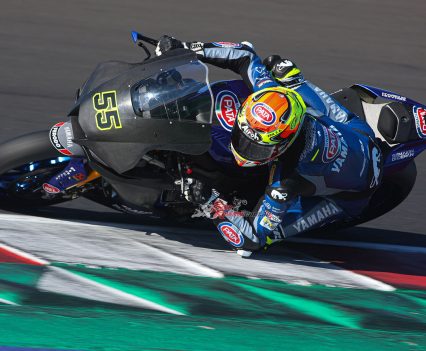 Aiming at improving the stopping and turning of his YZF-R1, Razgatlioglu and crew chief Phil Marron got to work on the feeling between rider and machine to sort the mechanical challenges that plagued Toprak in 2020. Using the new Brembo front brake caliper once again – having used it at Jerez in November last year – as well as a new air-intake designed to increase speed and reduce lift and with the upgraded 2021 engine, Toprak was able to finish second. 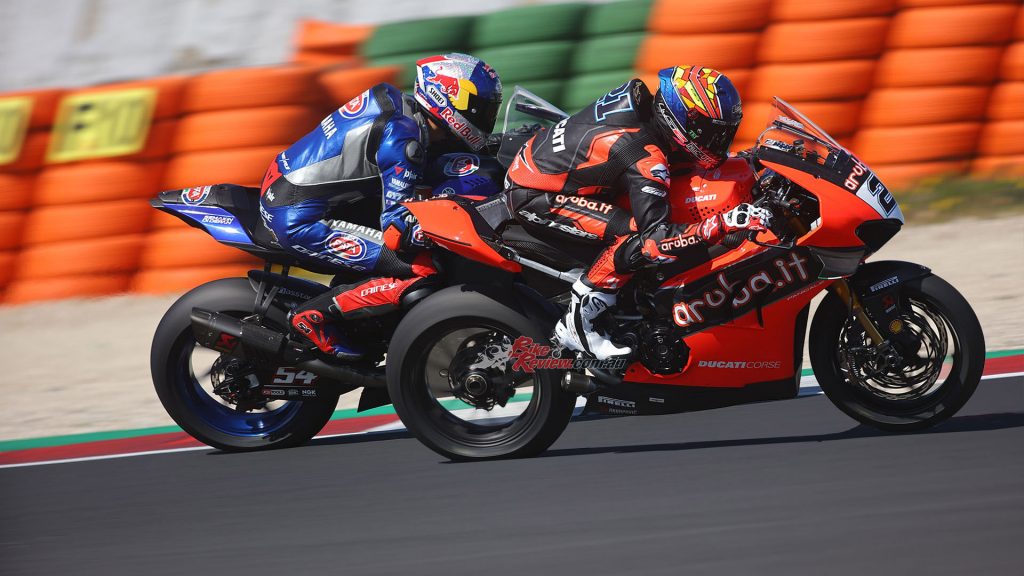 Teammate Andrea Locatelli was likewise impressive as he continued to get vital laps under his belt on a bike in what was only the second test on the bike, to conclude the two-day session in fifth.

Garrett Gerloff (GRT Yamaha WorldSBK Team) and Japanese rookie teammate Kohta Nozane were working on finding new base settings for their season ahead. For Gerloff, his aim was to get back into the rhythm of things and to get accustomed to the 2021 Yamaha, having been on the 2019 version last year. It was a strong second day, with Gerloff running inside the top three throughout and even leading at one point before finishing third at the flag. Nozane, who is fresh from MotoGP™ testing, continued to adapt to Pirelli rubber as well as his new team, with the hope that he is at the sharp end by the end of the season. He finished eighth at the end of the day, scalping Tito Rabat who was ninth. 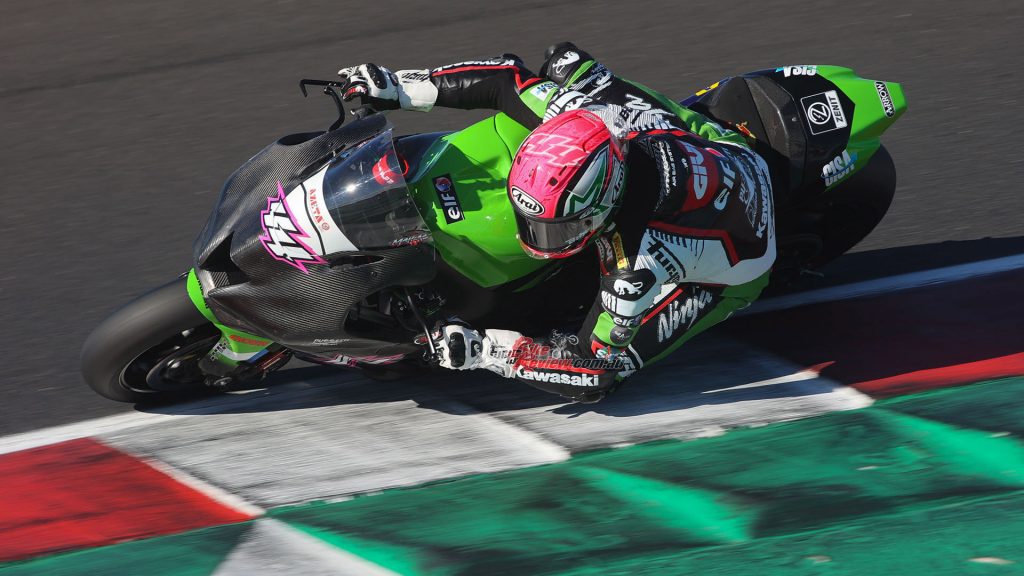 Mahias was around a second off the pace in the closing hours and finished a hard-earned sixth overall.

The Kawasaki effort was solely resting on Lucas Mahias (Kawasaki Puccetti Racing), with him graduating up from the Puccetti Kawasaki WorldSSP team to enjoy a first full year in WorldSBK. With 2020 ZX-10RR equipment but with 2021 parts to put through their paces, Mahias was around a second off the pace in the closing hours and finished a hard-earned sixth overall.

At the Motocorsa Racing Ducati Panigale V4 R set-up, Axel Bassani continued to impress quietly and steadily, as he continued to get up to speed in consistent weather conditions. Testing the 2020 bike on day one before switching to the 2021 machine for day two, Bassani has had to adapt his riding style slightly. He was happy with his work but will be focusing on working in the braking areas. 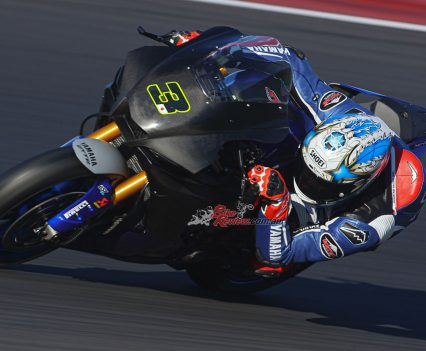 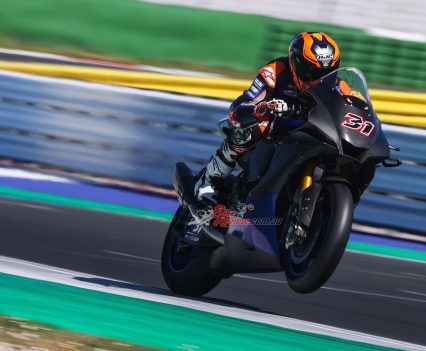 For Tito Rabat, he continued to get used to WorldSBK machinery and put in over 100 laps. The Spanish rookie clocked the greatest number of laps out of anyone at the test on day two and plans to put the data to good use in their upcoming tests, in order for Tito to bridge the gap to the leading group.

At the Alstare Yamaha set-up, Christophe Ponsson had a difficult day after suffering a big crash towards the end of the morning session. Come the end of play on the second day, Ponsson was tenth. 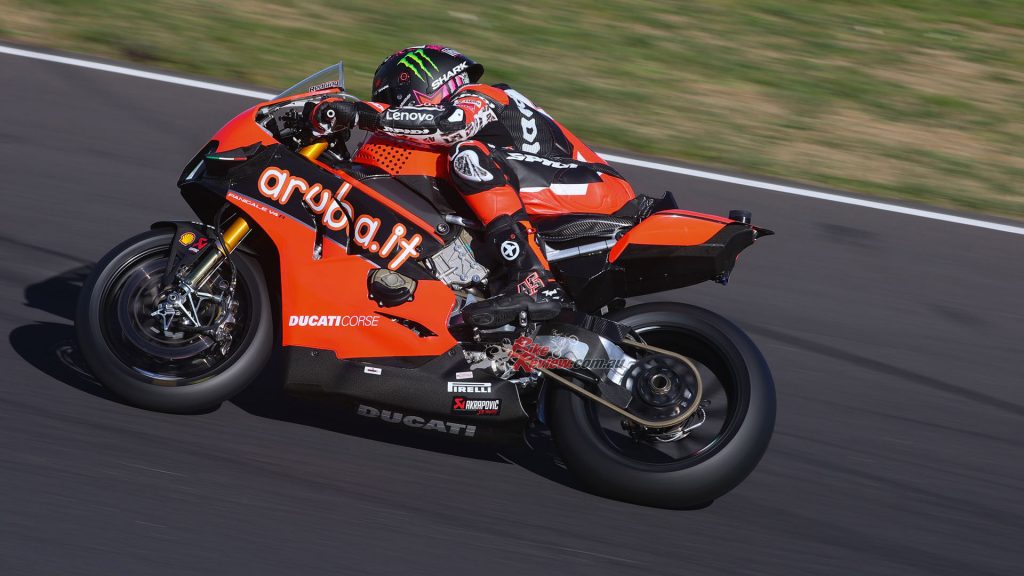 Redding completed 64 laps at Misano, continuing to make progress on his way to fourth.

WorldSSP: In WorldSSP, Philipp Oettl (Kawasaki Puccetti Racing) was the best rider on track, marginally ahead of South Africa’s Steven Odendaal (Evan Bros. WorldSSP Team). Oettl has an all-new Kawasaki ZX-6R and was looking at working on suspension feeling, whilst Odendaal is bedding himself in with the reigning champions, as they work together on finding a bike that suits his riding style. Randy Krummenacher (EAB Racing Team) was third overall and continues to readapt to Yamaha machinery after a year off it in 2020.  The Swiss rider set 67 laps, more than anyone in WorldSSP. Can Öncü (Kawasaki Puccetti Racing) completed WorldSSP running in fourth after a crash in the morning, although he was able to get back on track as he gels with the new squad.