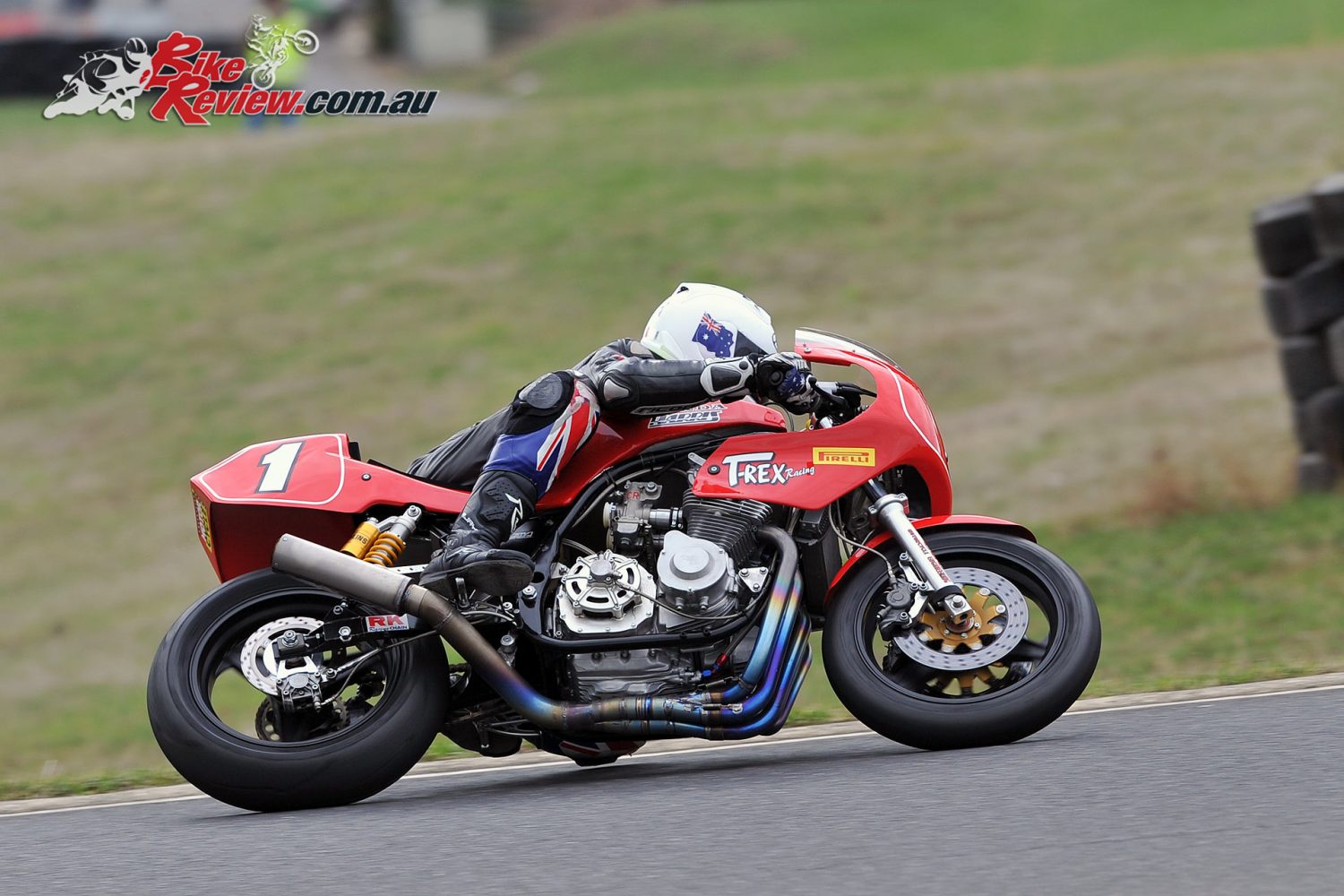 Jeff gets the run down on the Michael Dibb #1 T-Rex Harris Honda and takes it out for a full track test. Here's the full review. Test: Jeff Ware Images: Russel Colvin

The past five years has seen the classic racing scene here in Australia become more competitive than ever. In fact, the pointy end of the P5 or Forgotten Era Unlimited field, including this T-Rex Harris Honda, is as competitive, if not more competitive, than our premier class modern racing is. 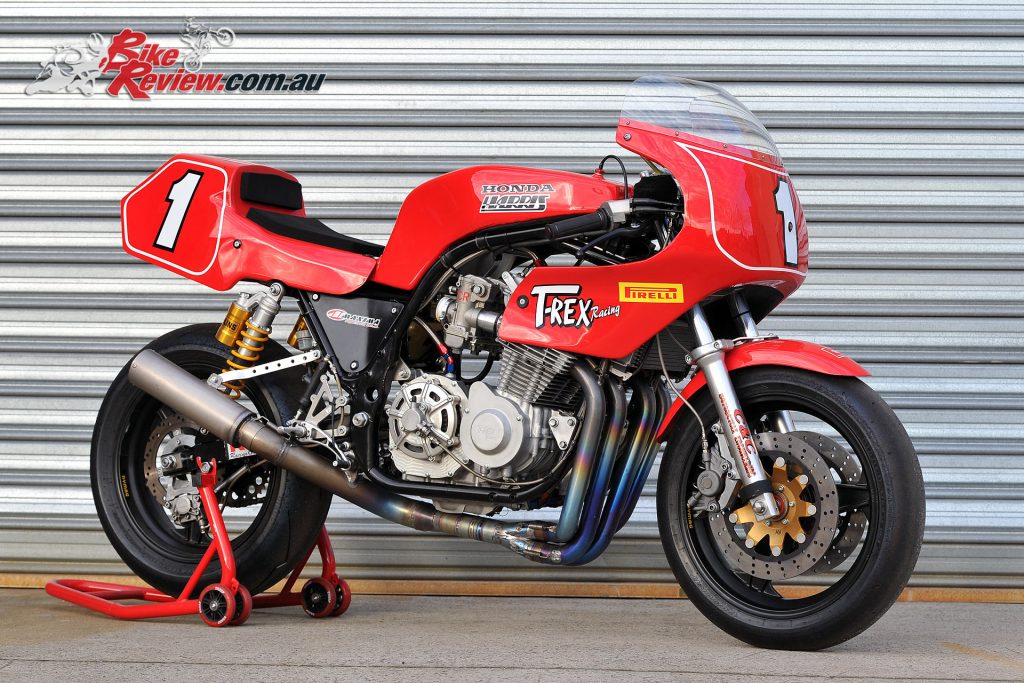 These guys are all International heroes and their lap times on these 30-plus year-old machines are only a few seconds off a current domestic superbike time. It’s mind blowing.

There’s one name, however, that keeps on appearing at the top of the time sheets again and again and that name is Michael Dibb. Dibbsy is not a retired International – he’s an enthusiastic TRX850 obsessed ex club racer who happens to gel so perfectly with the T-Rex Harris Honda that no bastard in the country can catch him when he’s ‘on’… you can read more about him in the interview breakout. He really is our version of Guy Martin!

The opportunity came for me to ride this motorcycle after I was introduced to the owner and builder, famed racing services engineer Rex Wolfenden of T-Rex Racing fame, by the late great Ken Wootton’s fabulous sister, the famous Nurse Wootton. 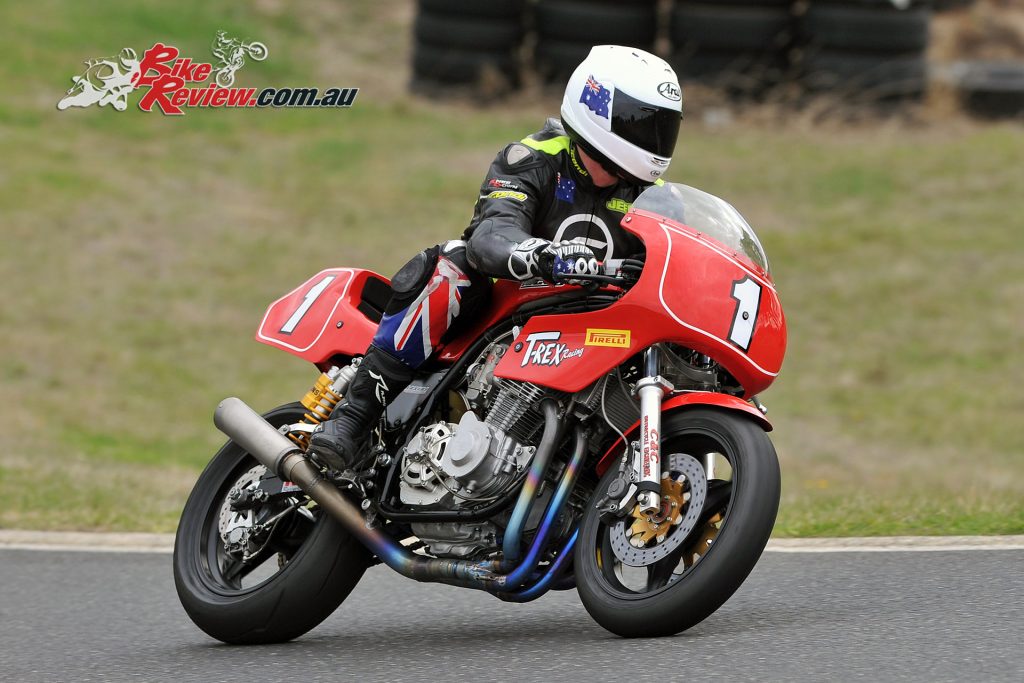 I chatted with Rex and after exchanging details the offer to ride this and some more exotic T-Rex bikes was on the table. The perfect place would be the 2014 Penrite Broadford Bike Bonanza.

Having keenly followed the results of the current #1 plate holder I was more than eager to ride the bike – in particular, keen to compare it to the three TBR D&D Katanas I’d recently ridden. Those bikes, piloted by Giles, Martin and Roberts, are three vastly different machines and the main competition of Rex and Michael.

This machine also happens to be one of the most immaculately presented racing motorcycles I have ever seen in the flesh. It truly is absolutely spotless and perfect. 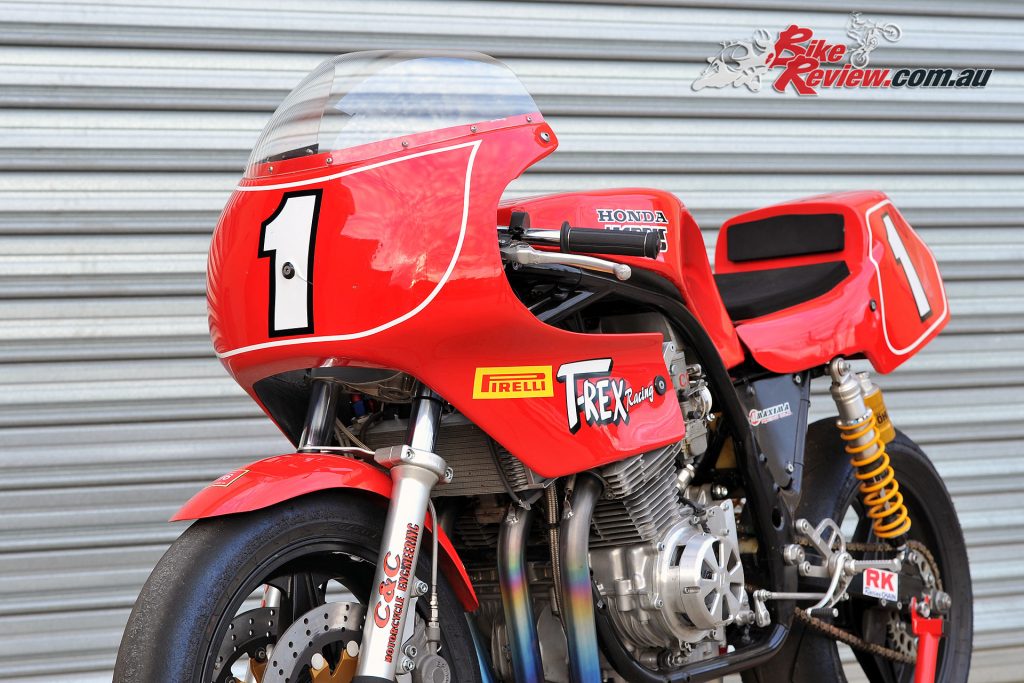 I met Rex and his equally famous brother Clyde at Broadford on the Saturday and was greeted with the stunning machine surrounded by an enthusiastic crowd with Rex busy chatting to fans and customers.

The bike was on warmers and ready to go so I didn’t muck around and geared up, eager to get on track.

With an hour to kill I walked around the bike and took in Rex and Clyde’s art. The machine is based around a Harris F1 frame, ordered by Rex to T-Rex geometry and swingarm pivot and length specifications. Years of experience means they know the numbers to use and riding the bike proved this to me. 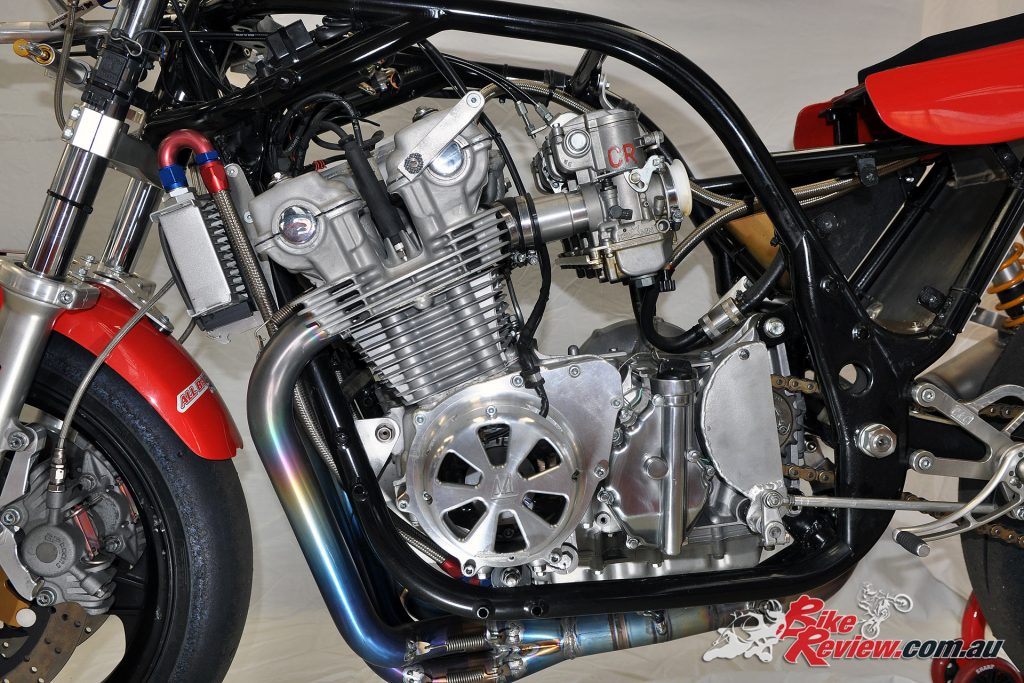 The frame kit is modified to house the CB1100R engine and is powdercoated black, as is the box-section swingarm. The bodywork including the seat unit, front guard, fairing and fuel tank are Harris units but the rest of the bike is made here in Australia and the quality is stunning.

The triple-clamps are C&C Motorcycle Engineering billet items, made to squeeze the 41mm conventional forks that run T-Rex internals. The handlebars and even levers are also by C&C, which is Clyde’s business, as are the rearsets and rear brake lever, along with the gearlever – which is set up in race shift pattern. 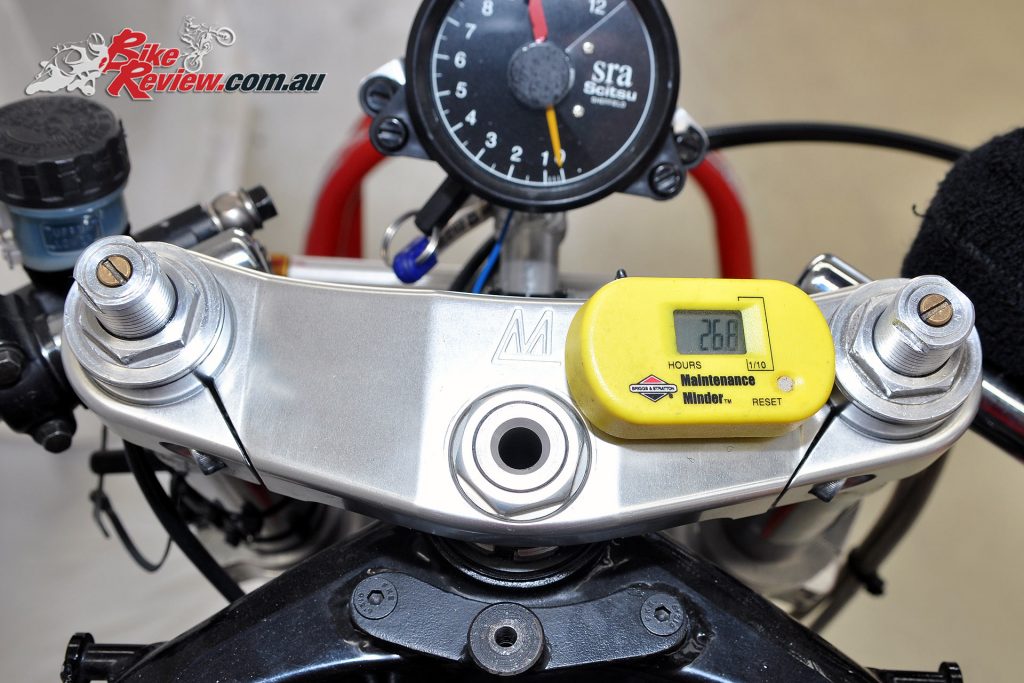 Believe it or not, those stunning XR69 replica rotors are also made by Clyde in his Melbourne workshop. Period AP Racing monoblock twin-piston calipers and Bendix brake pads squeeze them. Fluid from the Nissin master-cylinders is pressurised in Venhill brake lines.

The rolling unsprung mass is minimal with ultra lightweight Dymag wheels and Pirelli SC2 racing slicks. The rear rotor is also a one-off and the rear caliper a two-piston period Brembo unit that is independent from the swingarm and retained with an adjustable alloy rose-jointed torque arm. 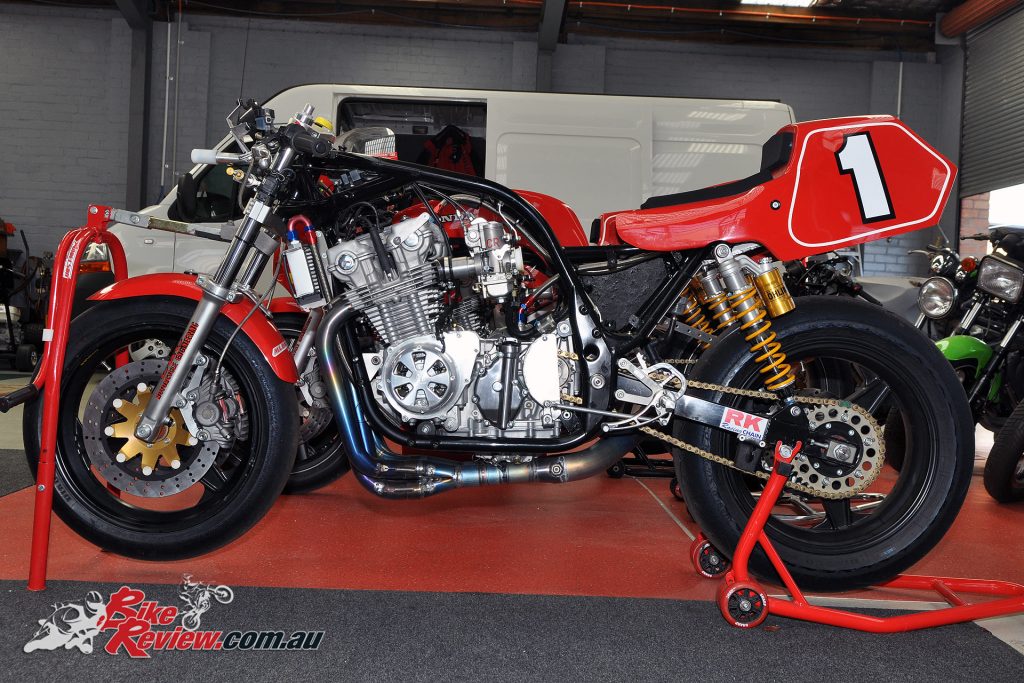 Both front and rear axles are oversized and titanium, as is the swingarm pivot. Ohlins shocks provide rear suspension control.

The main fairing bracket is a gorgeous alloy handmade unit and has a centrally mounted Scitsu analogue tachometer and a single point front fairing nylon mainstay. All these parts are very neat, lightweight and practical.

But unlike many racebikes, each part is also aesthetically pleasing, which is a theme carried throughout the entire bike. Every part looks perfect and not out of place – and each part complements the next. It’s a classy motorcycle, not just a fast one… 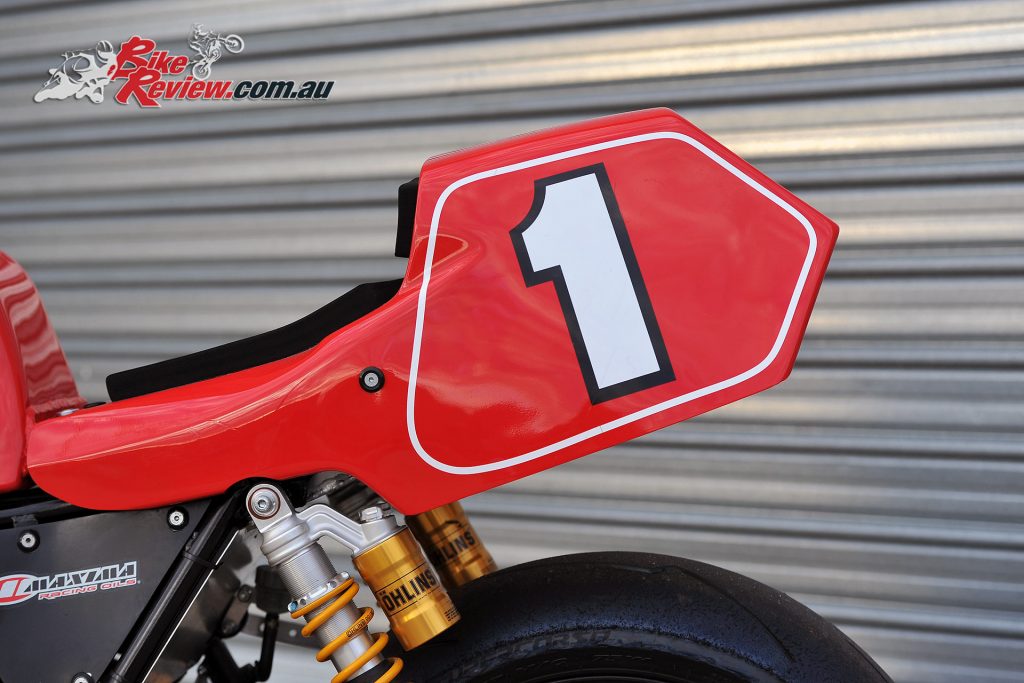 The engine is the heart of this bike and is proudly on display, bulging out of the Harris frame like it just ate a bloody huge can of spinach – it’s the Popeye of engines!

The CB1100R is a rare motorcycle – only 4000 ever made over the four years of production. To use an engine in a racebike is total commitment – they are worth a fortune! 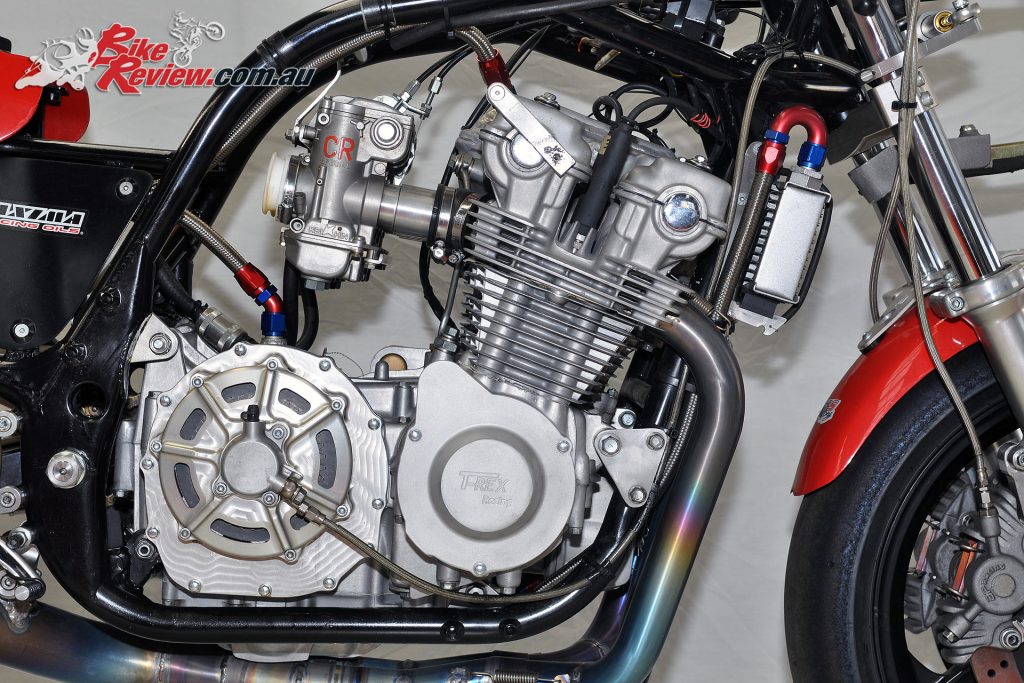 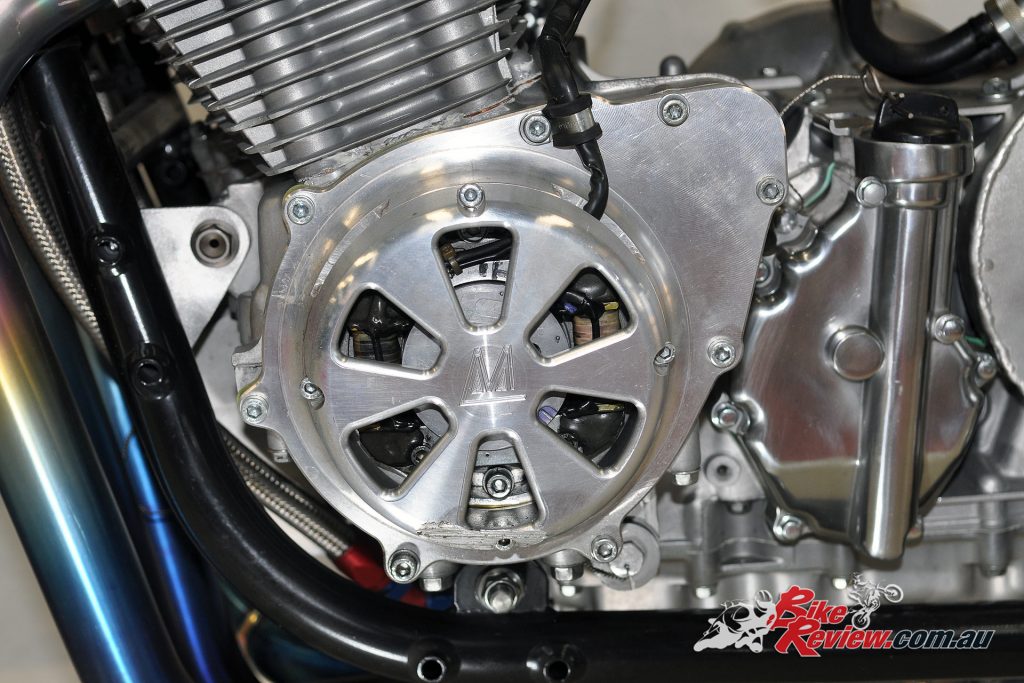 Highly polished and fitted to silver cases and cylinder/head, with chrome or stainless steel bolts throughout, make this the prettiest engine in motorcycle racing full stop. The gorgeous braided stainless and anodised alloy oil lines and the external oil cooler top it off, while the Keihin CR carburettors are yet more drool factor – and this is all before spotting the titanium exhaust headers! It just keeps getting better.

The cylinder-head is ported and flowed, with modified combustion chambers and oversized valves. The camshafts are RSC specification cams, replicated by Clyde. The pistons, modified Honda units, swing off Carillo conrods that are bolted to a CB1100R lightened and polished crankshaft. 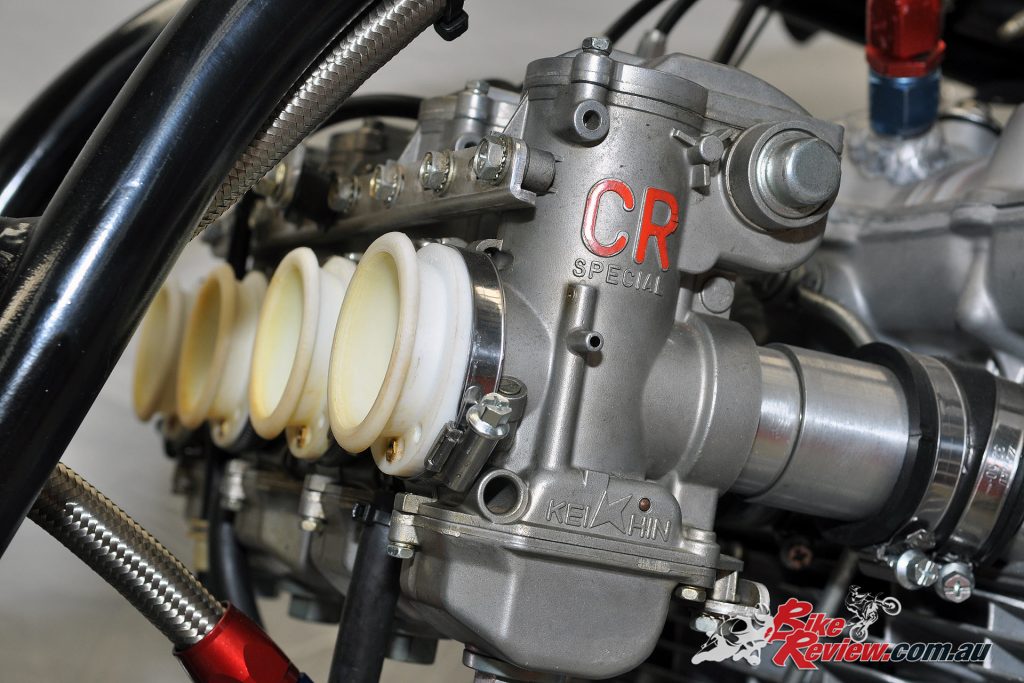 The cylinders are bored 3mm and the standard crankcases are used. They house a stock, strengthened five-speed gearbox. The RSC replica dry clutch uses a Ducati clutch pack and hydraulic actuation, while the charging system and starter system are removed and replaced with the self-energising Electrex system.

Fuelling is taken care of by Keihin CRs and the exhaust system is a stunning titanium four-into-two-into one item.

An hour is not long enough to truly admire the work that has gone into this dream machine. To race this bike in anger, as Michael Dibb is entrusted to, must be a nerve wrecking experience… 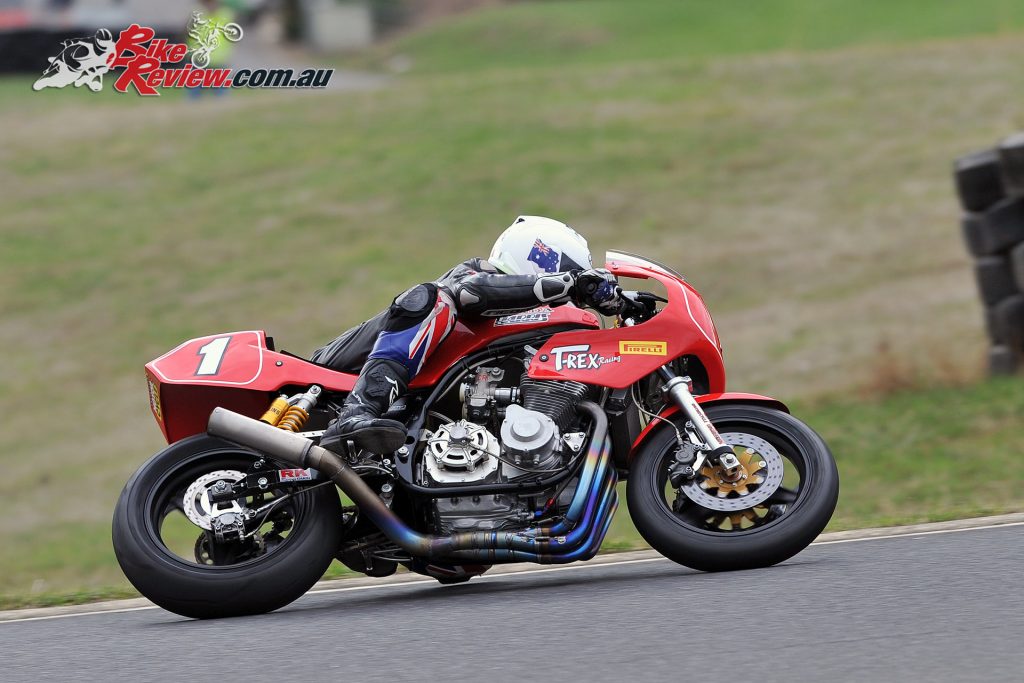 As I familiarise myself with the riding position I’m surprised at the width of the bike. For instance, it is much wider than the Katanas, however, the seating position is more modern in feel and I like the feel of the wide clip-ons. Plenty of seat-to-peg room too, Dibb is around my height, 185cm.

The screen is huge, great for those long straights like SMSP or Phillip Island. The throttle is not heavy, everything feels in the right place, no thought needed, the controls are just there… 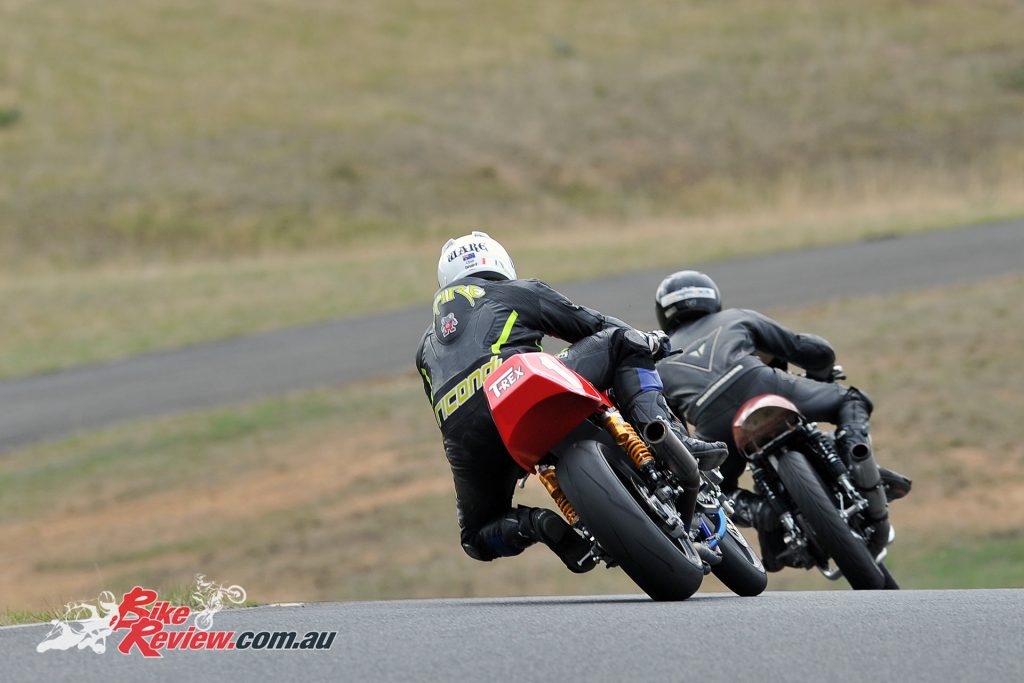 We fire the bike up on the roller and once warmed up by the careful hand of Rex, I head off up to the dummy grid, the crowd in the pits all turning to watch the bike – there are plenty of envious faces there. I’m privileged to ride this bike, I think to myself, as I try and find neutral before the clutch and engine over heat! I can’t and Rex quickly runs to a marshal, who quickly waves me though and onto the track while I’m on the move – thankfully!

I’ve done a million laps around Broadford and won quite a few races here since the 1990s so my focus is on the bike and the traffic! This is the ‘expert’ session of the open Penrite Broadford Bike Bonanza but there are mobile chicanes everywhere and all I can think of is the stunning paint and that I don’t want to crash! 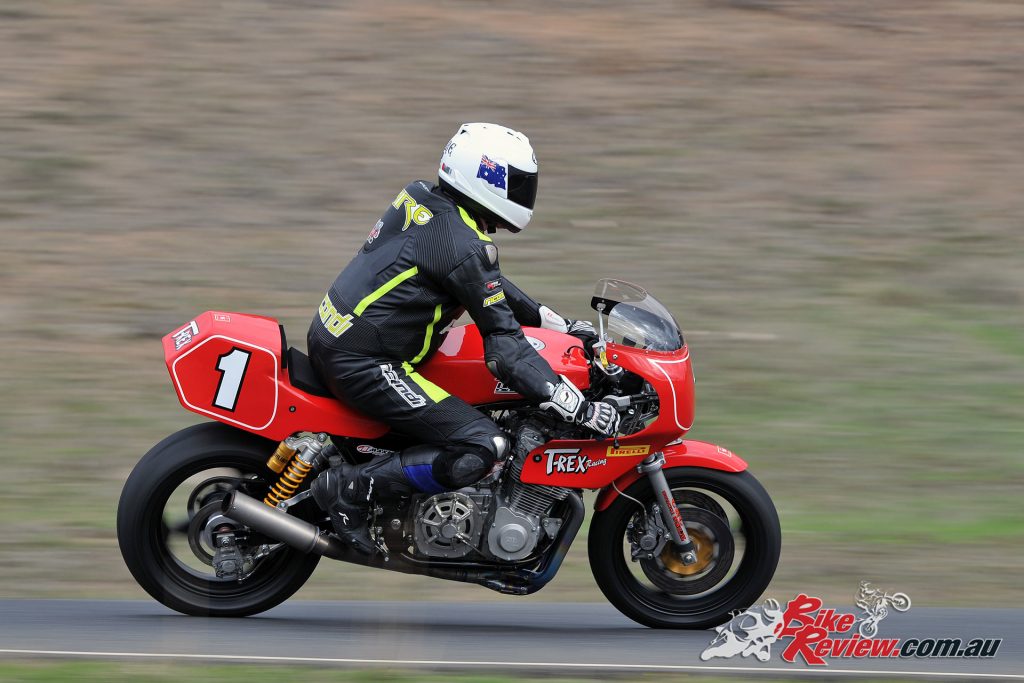 By the end of the first lap I decide to put my head down for a few laps and get the test done, forgetting the speed humps around me and just wheelstanding past them on the inside, outside or wherever I want to. That’s the first thing I realise – for a big bike, this machine is very easy to ride and very raceable. Any line is a good line, which is a real surprise as I was expecting an old school single sweeping line motorcycle. Amazing… it could be a new Fireblade for all I know!

I’ve ridden on the Pirellis a lot in the BEARS series and they are brilliant but the front tyre is cold so I am reluctant to push too hard but I still do have a crack at it. 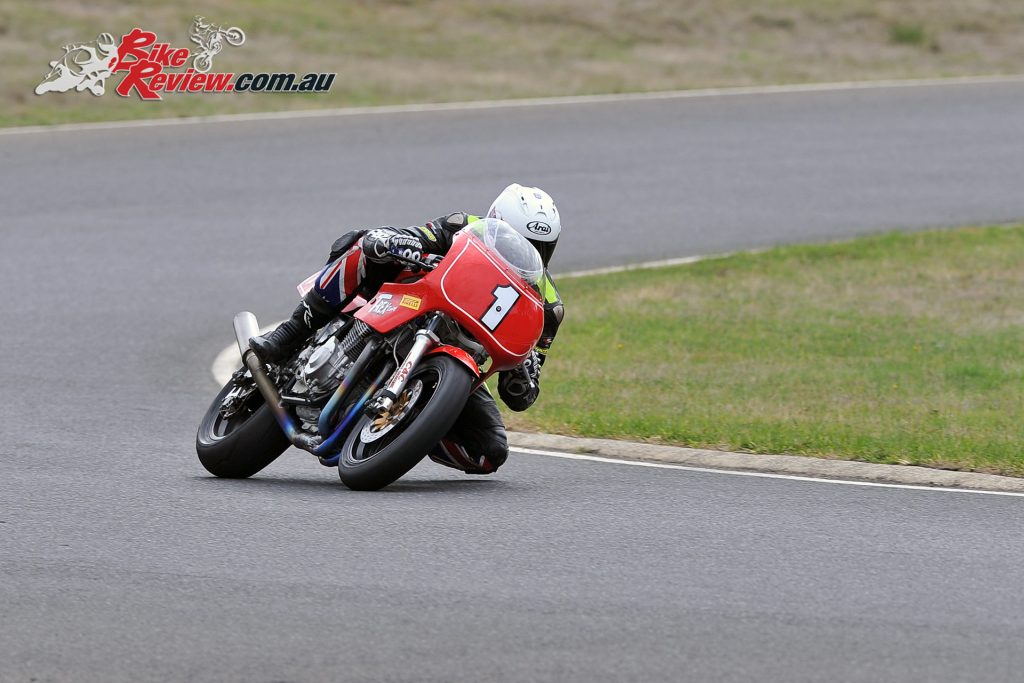 Engine first, as it is this that makes the entire bike work as such a good package. The power delivery is silky, silky smooth – like a perfectly tuned street bike. Soft on the throttle and yet extremely responsive, the engine makes broad and tractable power right through the entire rev range. It’s strong all the way through, where the Katanas were explosive ‘all or nothing’ in comparison. This bike must be sensational in the rain…

The gearbox shift is smooth and positive, no surprise false neutrals there but a slipper clutch would be nice for corner entry… there is a lot of lap time in one. 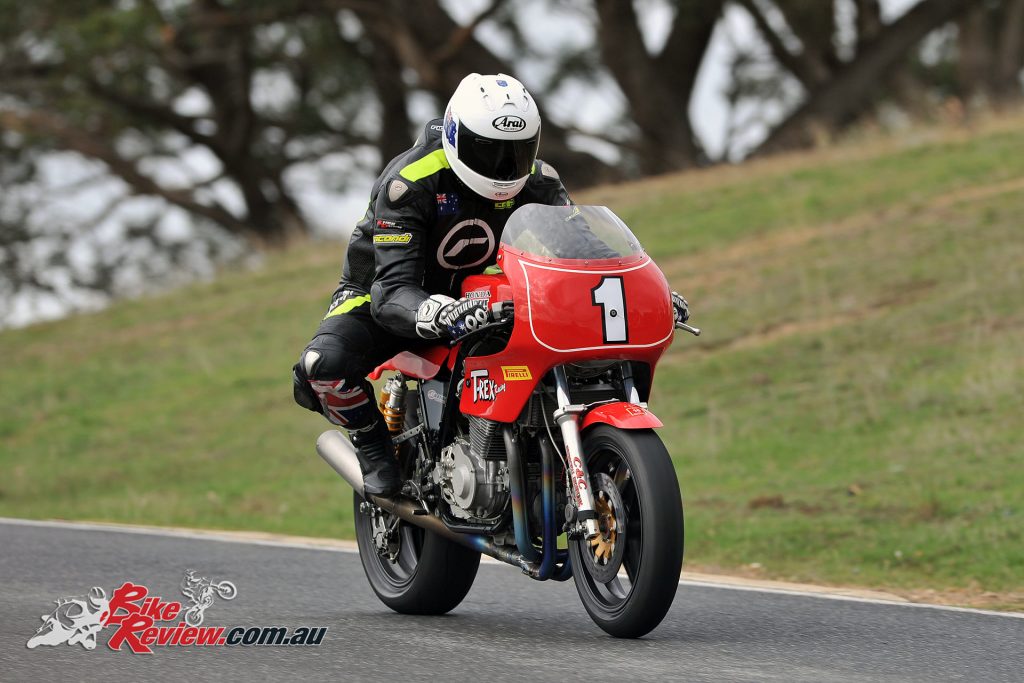 So with such a sweet engine, you get a settled chassis that does not try and tie itself in knots when the throttle is opened. There are 140 ponies trying to spin the rear Pirelli but in a gentle push not an explosion. The handling is equally as rider-friendly as the engine.

With over 800 bike tests under my belt, it takes me about three corners to know if I’m confident on a bike or not and this was no different. Second lap I felt like I’d been riding the bike all of my life ­– it’s that type of set-up. It feels like it can’t be crashed, which it rarely is…

The steering is linear, no crazy oversteer into turns, just nice progression but the bike can be put anywhere on the track. There is no effort needed to get the bike to full lean, it’s a seamless transition with no second centre. Once there, the bike stays planted and tracks beautifully. Even when the throttle is cracked the bike remains solid and drives off the turn on line with accuracy. 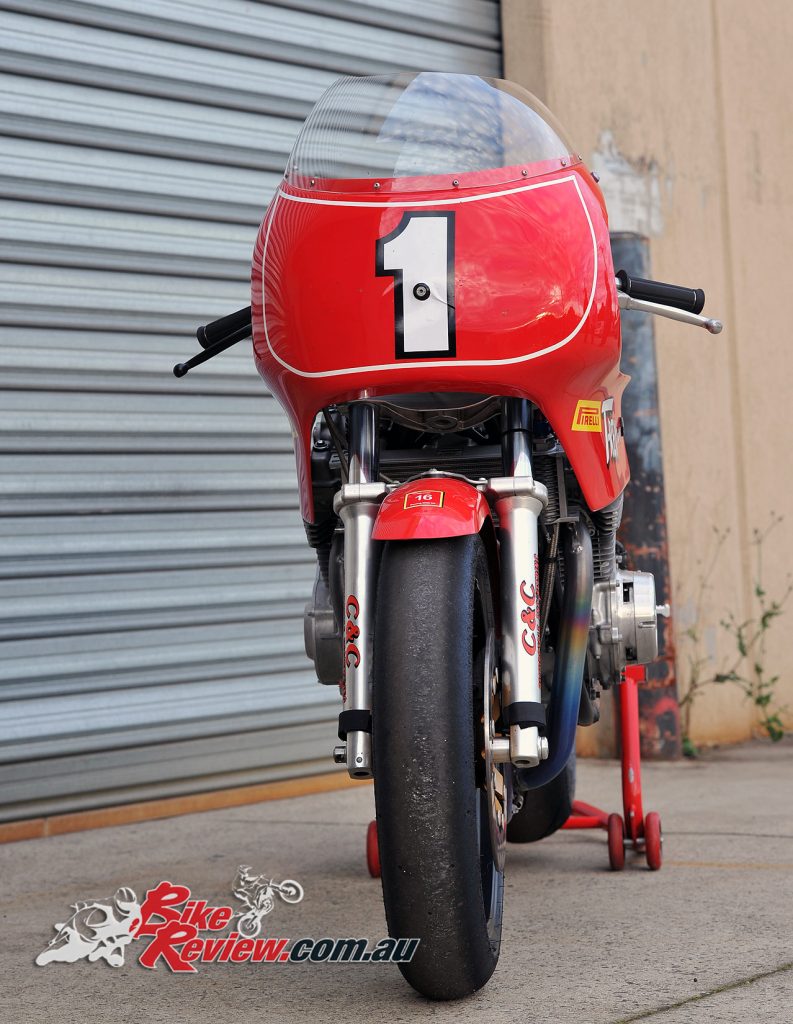 One strong point is change of direction, which I noticed to be particularly good through turns 7-8-9. Brilliant, no doubt the wide ‘bars and low weight stands out here.

The only point I found lacking on the bike was in the braking department. The front brakes lacked initial bite and feel – plus outright stopping power had my heart well and truly in my mouth a few times when I thought I was going off the track. 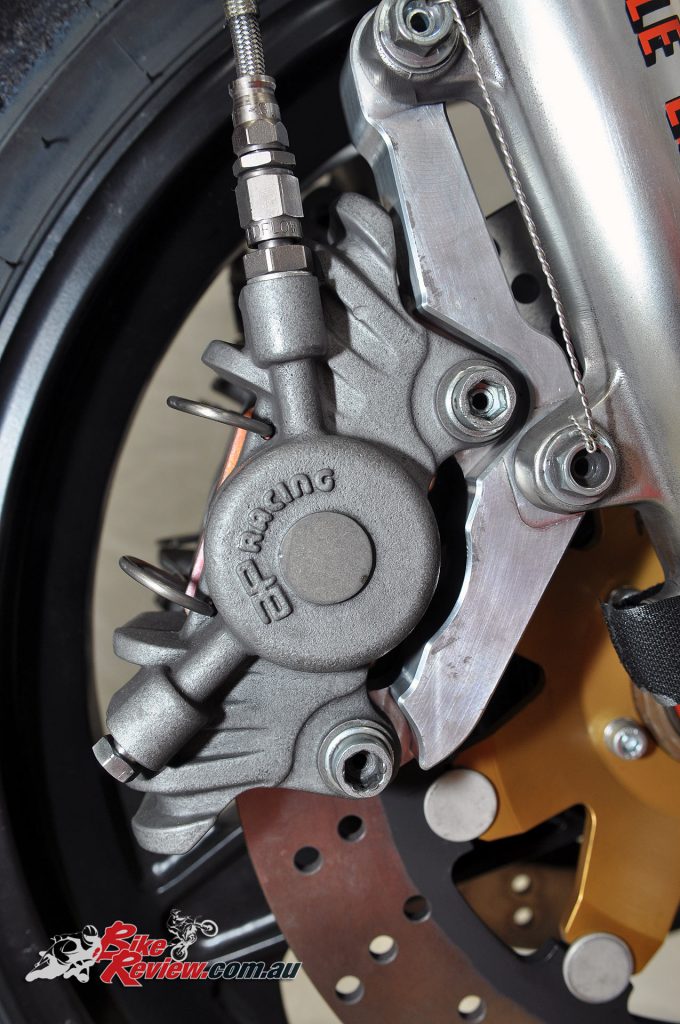 The specifications state Bendix brake pads. I use these myself for racing, the Carbon Matrix compound, and think that these would improve the bike 100 per cent over the sintered pads fitted.

Overall a pleasure to ride and the experience and hard work of Rex, Clyde and Michael is as clear as daylight in this motorcycle. Only experience can build something like this, because experience is what counts… 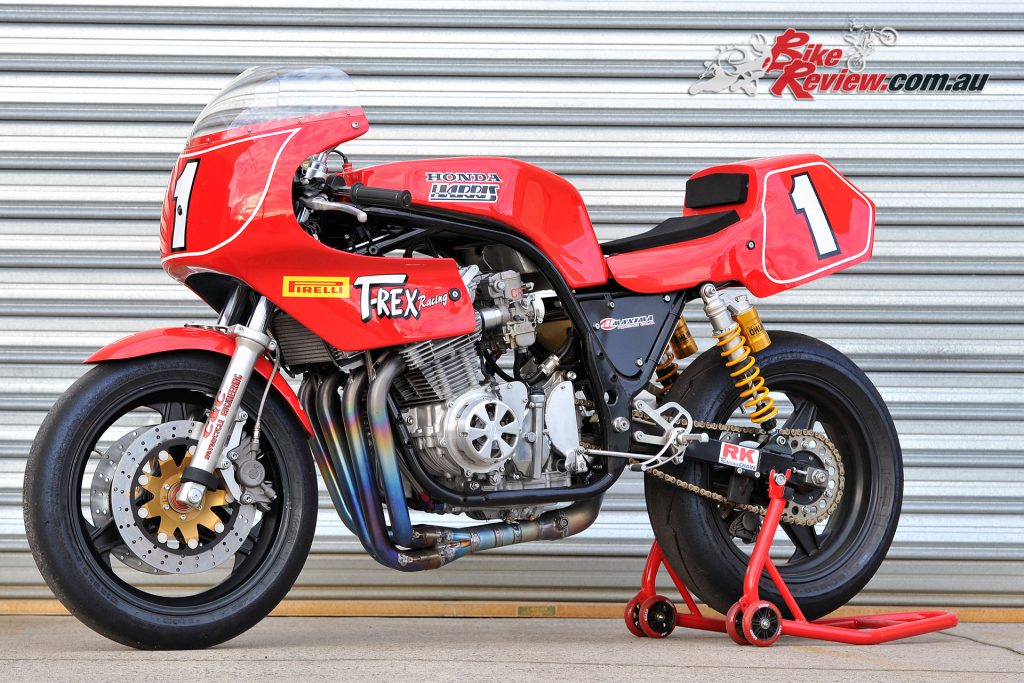 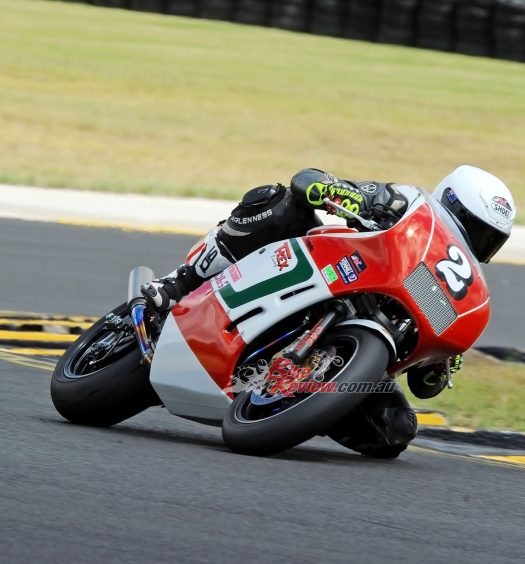 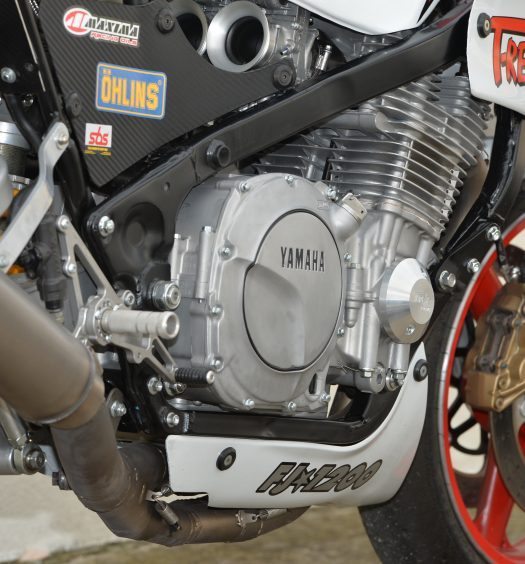