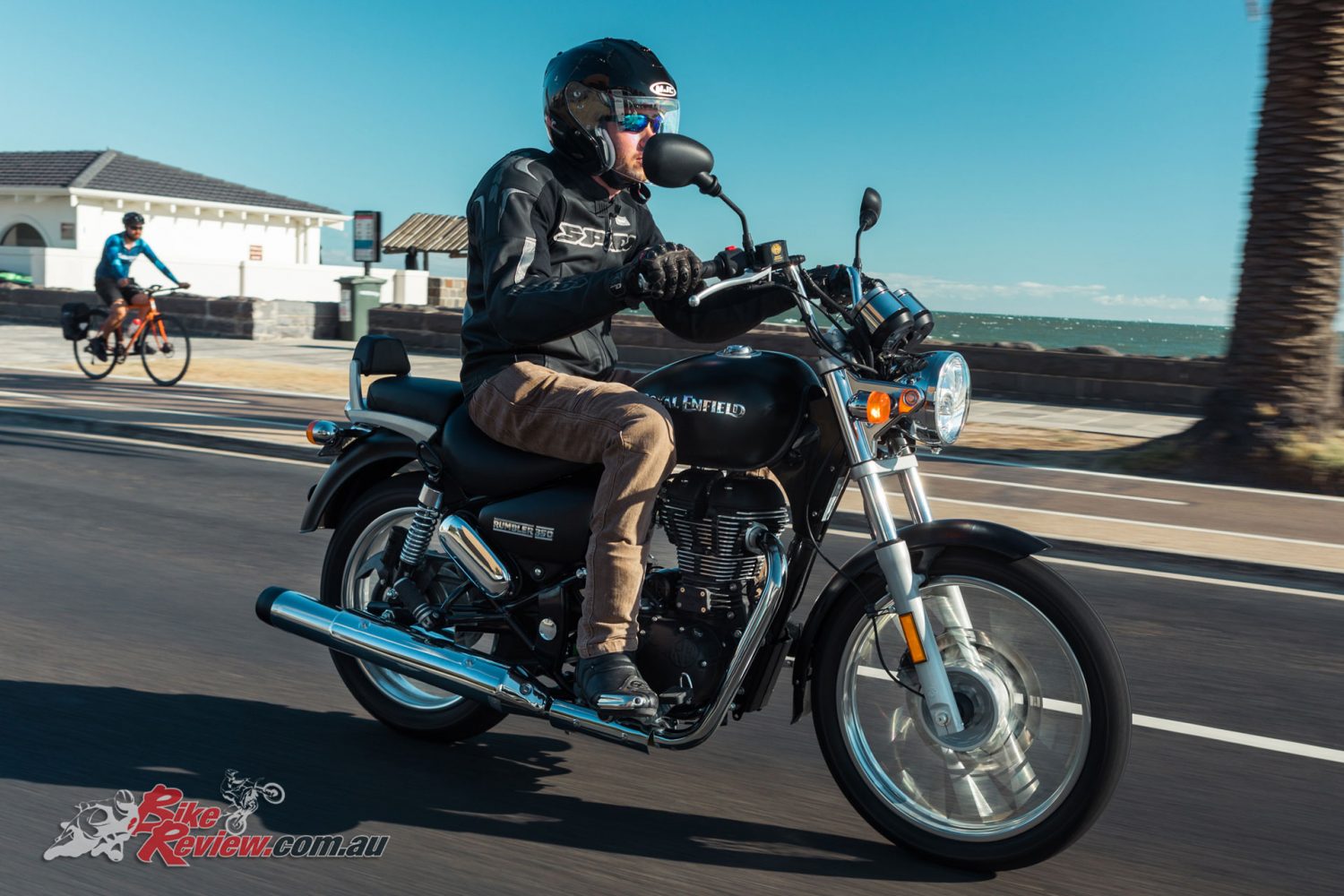 Before I get into the nitty gritty of reviewing the Rumbler let’s have a bit of background about the model, and Royal Enfield itself. Produced out of India, Royal Enfield deliver a huge number of motorcycles to their home market, and are basically held in the same regard there as Harley-Davidson are in the US. 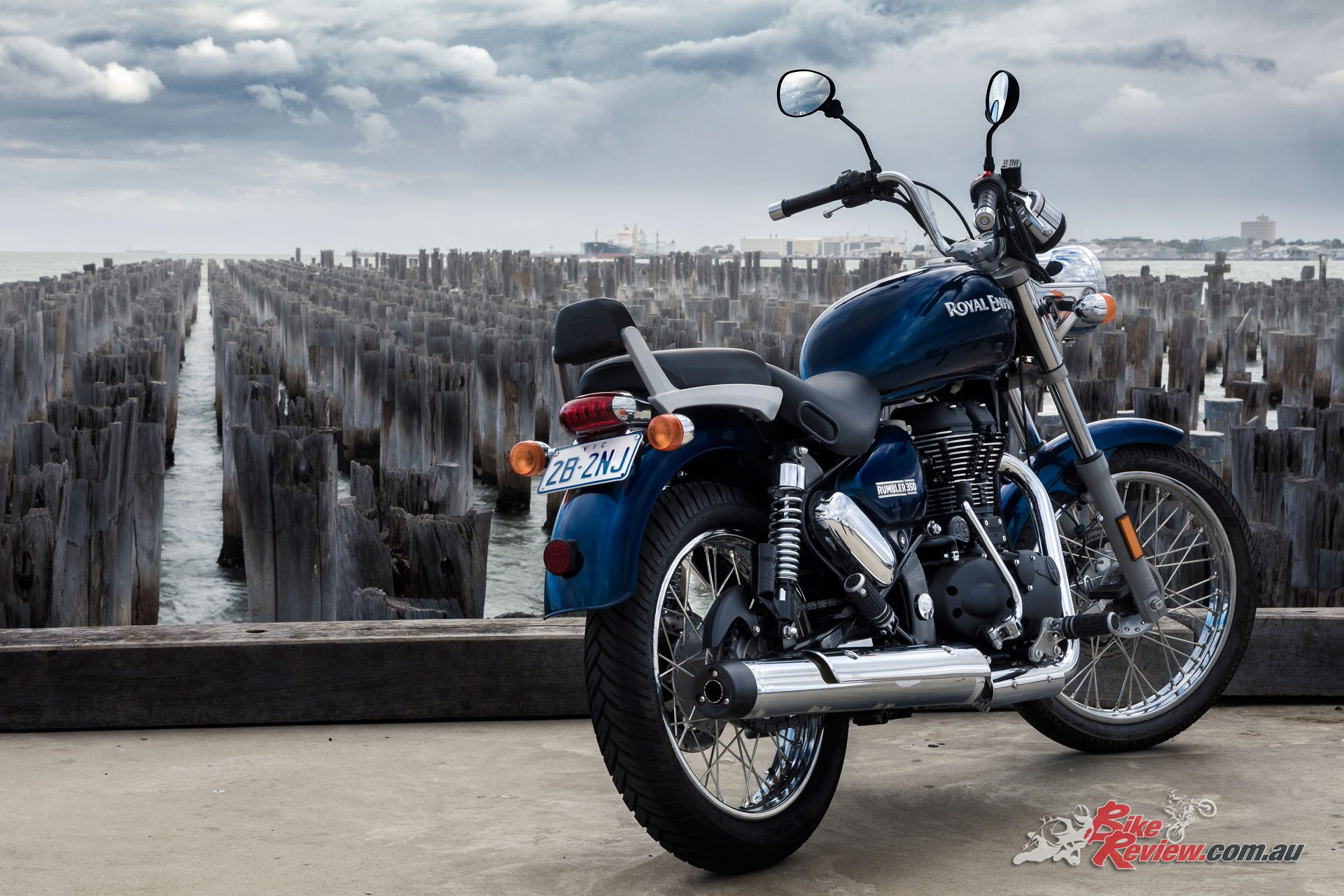 The latest Royal Enfield to hit Australian shores, the Rumbler 350 is aimed at the LAMS cruiser market

There’s huge brand loyalty and an immense sense of pride, with the brand’s continued existence thanks to the Indian subsidiary who eventually took over the full Royal Enfield name and brand, but who had also been producing their models continuously for a huge period.

Production is edging towards a million vehicles a year, and realistically they are still in the position of providing alternative transport to people who simply can’t afford cars in many markets. This is in stark contrast to places like Australia, where small car prices have gotten so cheap that it has become hard to entice people onto two wheels for the convenience and savings factors alone. 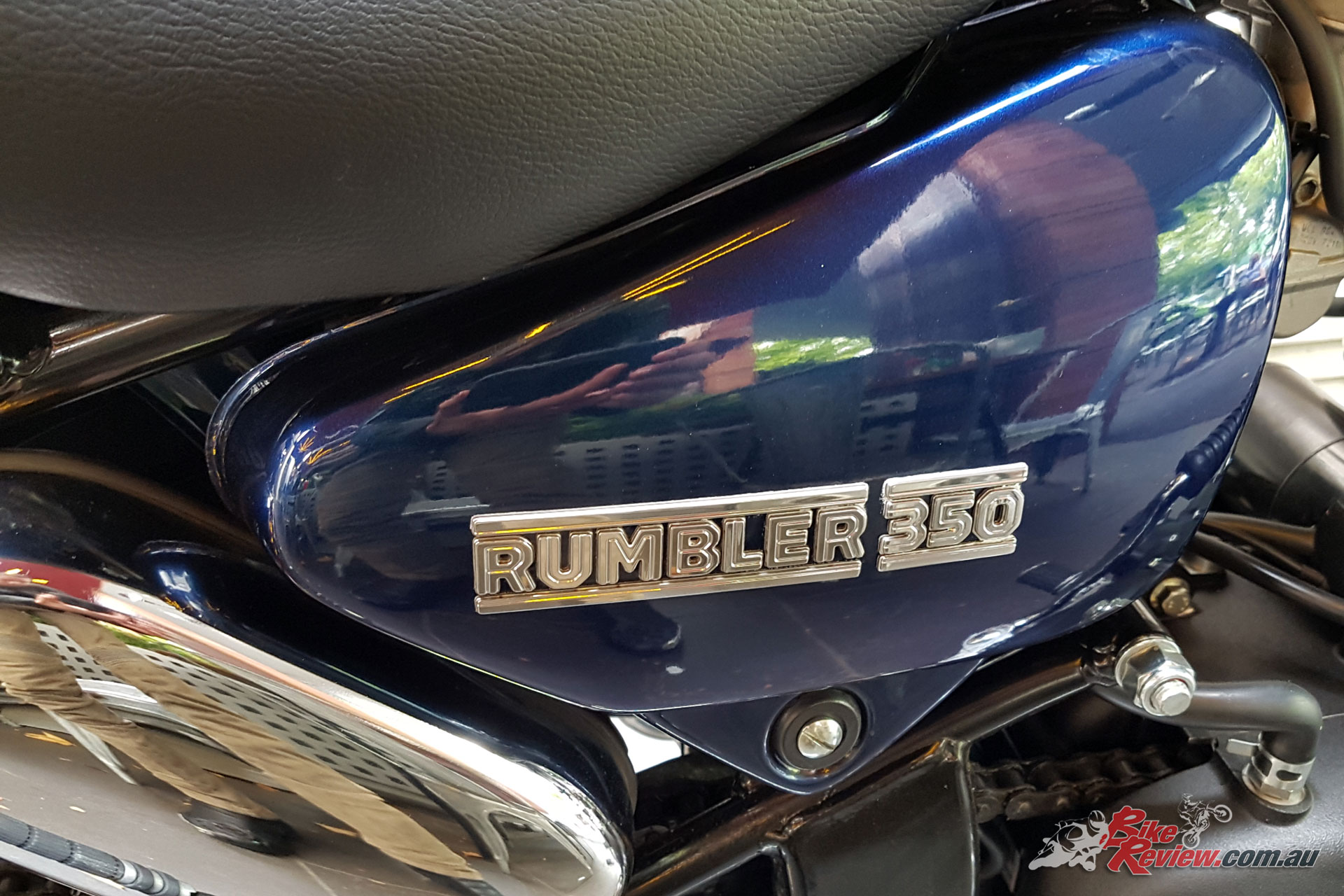 The Rumbler, or ‘Thunderbird’ as it is known in India, is a cruiser styled version of their classic offerings, and is available in a 350 and 500 version in India – with the 350 coming to Australia. With upswept ‘bars, plenty of chrome and forward controls, it does lightly fall into that category, which let’s be honest, isn’t exactly brimming with options for the LAMS market.

Now modern Royal Enfields are realistically an authentic option for capturing that classic bike feel, with basic performance. The thrills aren’t from getting a knee down, they are from enjoying the close connection to your bike, without the frantic need to burn off every light. 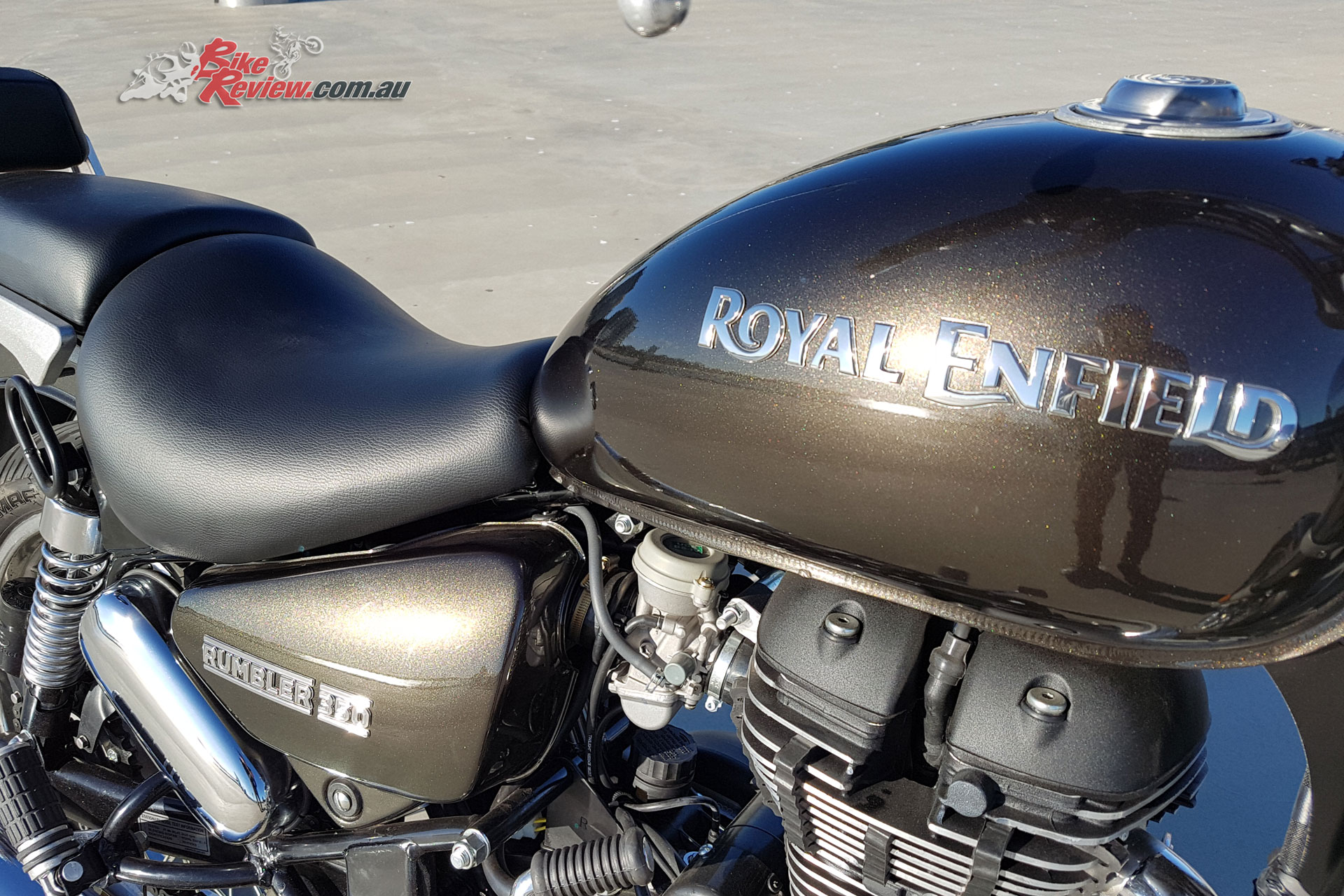 For this reason it would have been nice to see the 500 version, just to offer a bit more power, but maybe I’m projecting my ‘need for speed’ onto these relaxed machines in saying that. It would seem that Royal Enfield wanted to offer an alternative to the other LAMS cruiser options in the market, and a 350 is an engine capacity not yet represented, creating a point of difference.

The chrome and high quality paint on the Marine and Lightning options certainly lend themselves towards more premium offerings, and there’s great attention to detail across the bike. With that said, the $5790 RRP price ends up pretty close to $7k on road depending on your State, so that’s pretty typical of 300cc offerings, not cruisers, so there’ll be stiff competition from say nakedbike options. 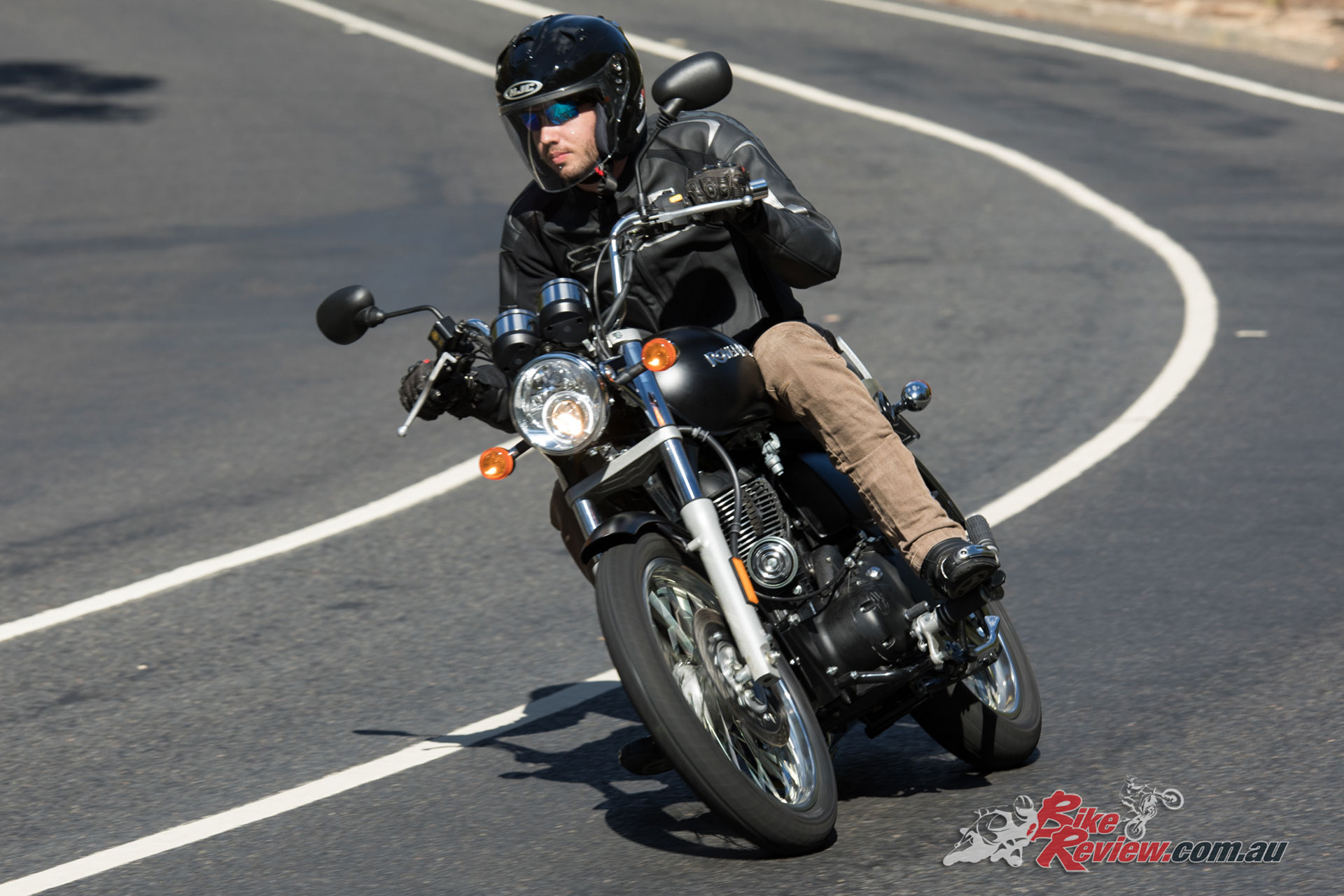 So onto the Rumbler 350 itself. A 346cc single-cylinder twin-spark engine provides just under 20hp by 5250rpm, which is not far off the redline, with a low compression ratio of 8.5:1. Torque is 28Nm at 4000rpm, and performance was ideal for thumping around Melbourne, seeing the visitor sights, and enjoying a sedate cruise. Ride too aggressively and you’ll be bouncing off the rev limiter, and there’s nothing to be gained, while timing your shifts right allows a relatively smooth transition through the gearbox.

With the toe/heel shifter and relatively low gearing from the five-speed gearbox, getting the most out of the Rumbler definitely requires aggressive heel (up) shifting when you take off from the lights, and once I figured out the right position for my feet to allow this, I was set. This strange forward cruiser controls choice made a lot of sense in this regard, with the massive rubber clad ‘pegs offering a comfortable foot position alongside the very inviting seat, and tall ‘bars. 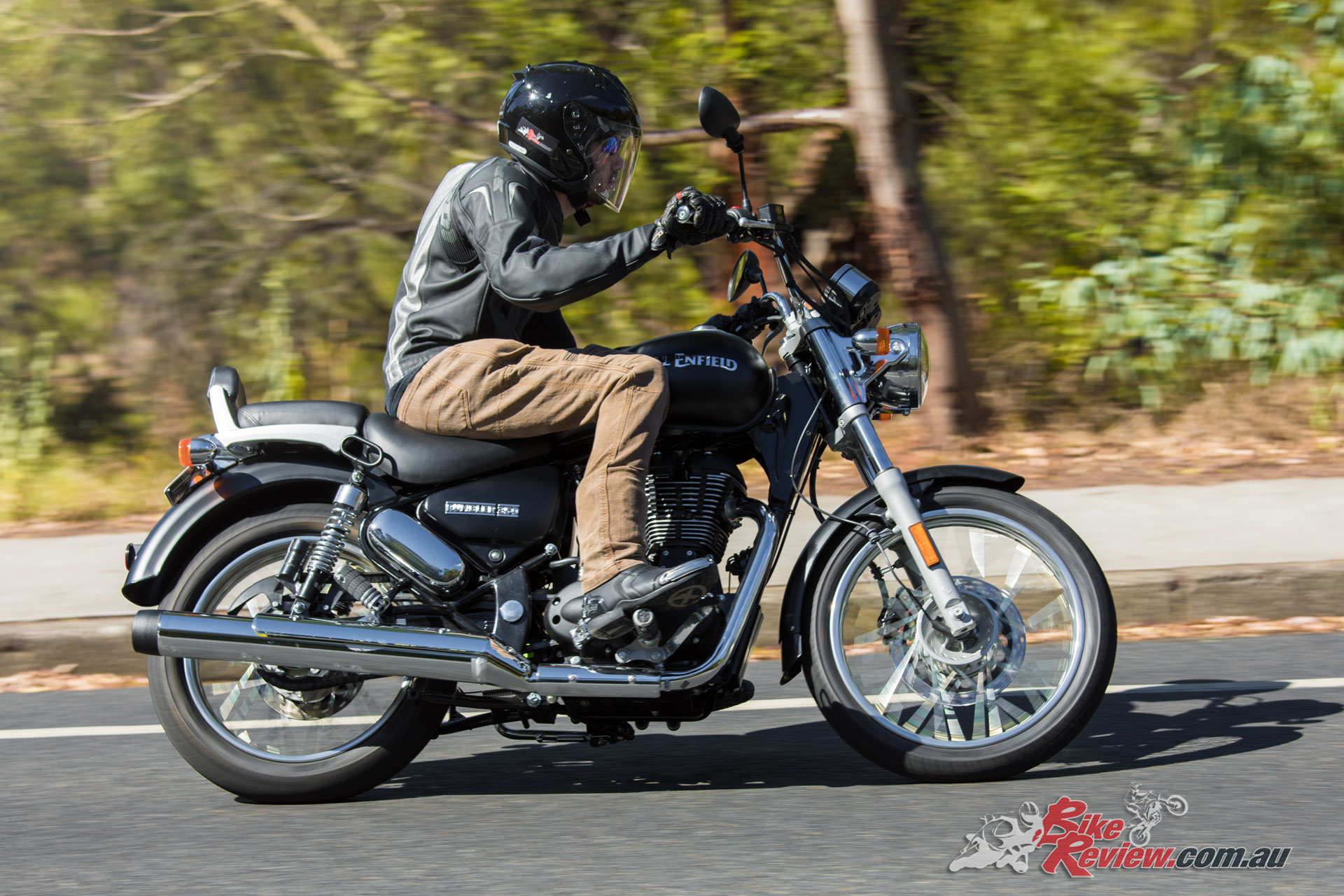 A comfortable seating position is thanks to forward controls and tall ‘bars, with nimble handling

The Rumbler 350 does look a little compacted in my eyes, something magnified by the short fat 20L tank, and tall ‘bars, however looking at the photos, it’s actually not a bad looker, with everything coming together. I rode the matte black ‘Stone’ version, however the Marine and Lightning colour schemes are the obvious choice. That deep speck paint looks awesome, and jumps right out at you in bright daylight.

Obviously this is a classically styled machine, and the previously mentioned chrome, plus spoked wheels and carby all play to this ideal. There’s electric start, but a kick starter with auto decompressor is also fitted, in a very nice move that is sure to have its proponents. I think kick only is a hard sell for a learner bike, but having both provides confidence, and the quirkiness of this feature can really shine. 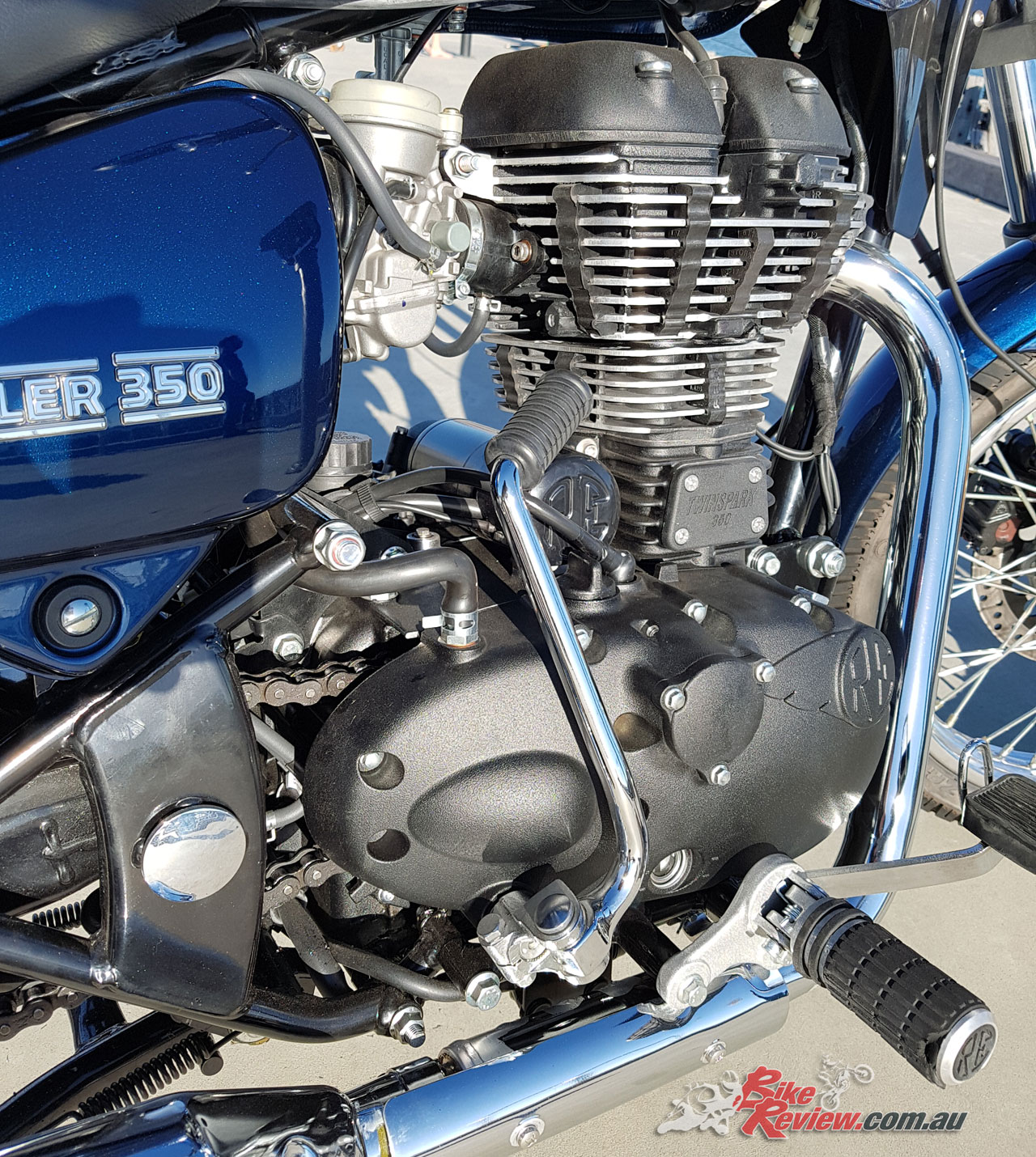 A kickstarter is a great feature… when combined with an electric start, for new riders. Authentic, but without the stress of being stranded in traffic trying to kick your bike into life

Handling is stable considering the short wheelbase and relatively thin tyres, and the wide ‘bars provide plenty of leverage for slow speed maneuverability. Top speed of around 100km/h is enough for some thrills, and to be honest, through the twisties we took photos in, I was already at the limits of ground clearance if I didn’t square up my corners and reduce my lean angle.

Suspension was also good on smooth roads and adequate over the rougher sections, with that super comfortable seat really helping ensure comfort – I was pretty fresh after our time spent in the saddle, which granted had quite a few stops, but left me feeling this the Rumbler would be great for short cruises and all-day urban exploring. 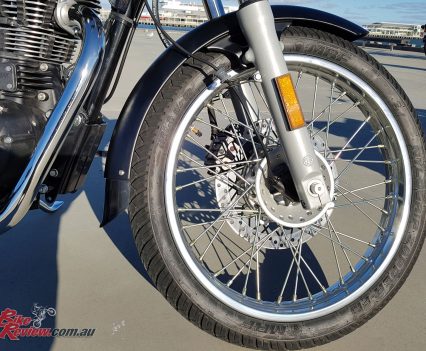 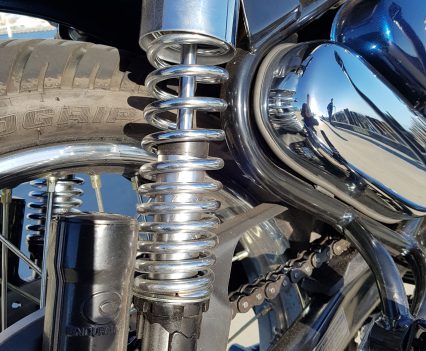 Brakes are basic, but like the Himalayan, suited to the MRF tyres and overall bike. More isn’t really necessary for the kind of riding this bike would be doing, with only the wet weather performance of the tyres not tested.

Our night riding also revealed a good headlight throw, and highly visible taillight, with backlit clocks and a digital readout that belays the bike’s largely classic theme. It’s a nice feature though. 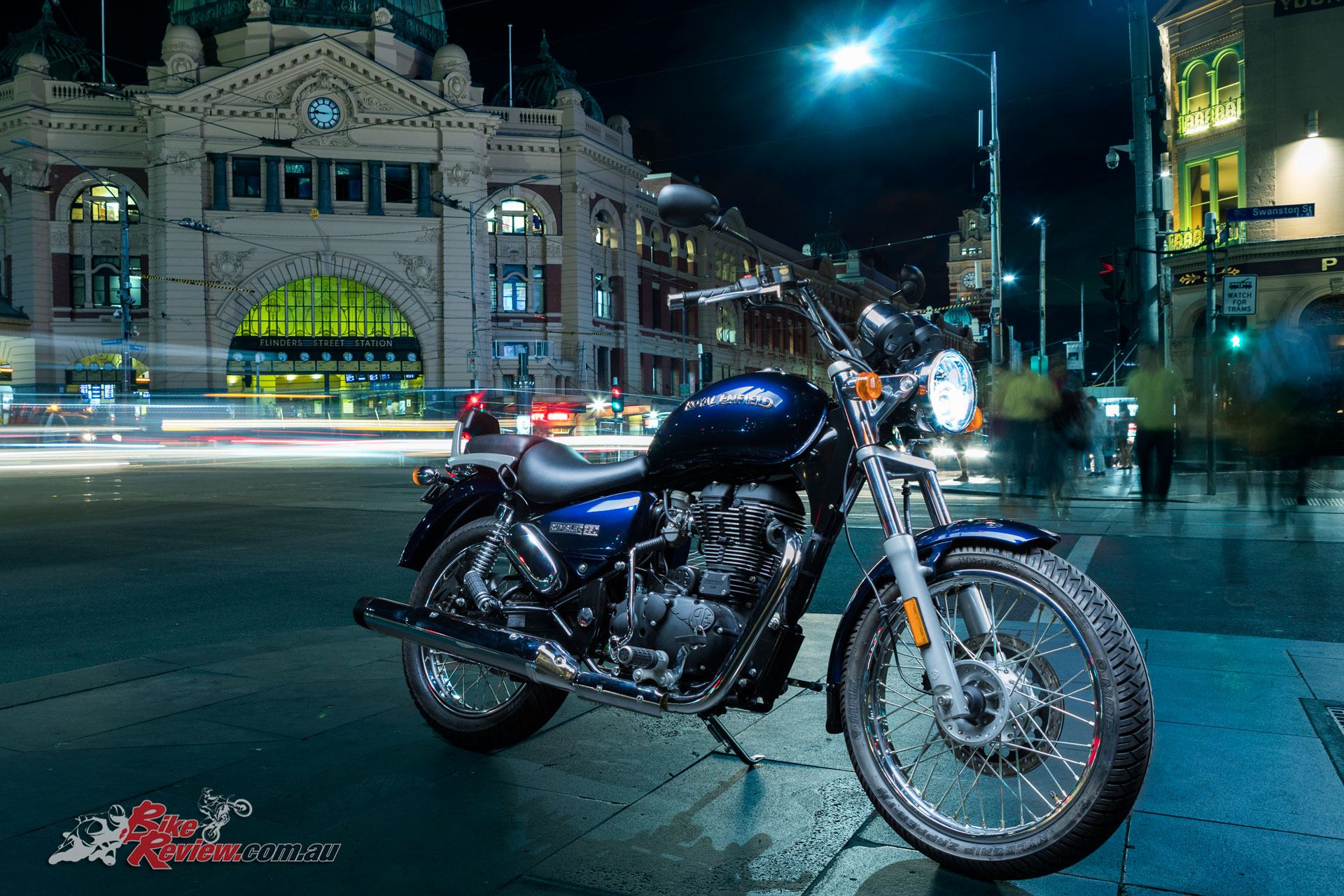 The Rumbler 350 actually looks pretty schmick, and features like a digital readout in one of the two clocks is a nice feature

Criticisms? Well that pillion back rest is a strange choice, and to be honest being a single seater with a rack would help looks and storage. I personally wouldn’t be too keen to add another persons weight to the Rumbler, performance is OK one-up, but I think it’d suffer two-up, while the brakes would likewise be under a lot more stress.

There’s also some vibes at high rpm, which aren’t too worrying, and the bike sounds very mechanical in the same conditions. Considering how we rode this machines though, they proved reliable, and was  no doubt more extreme than anything most owners would do. 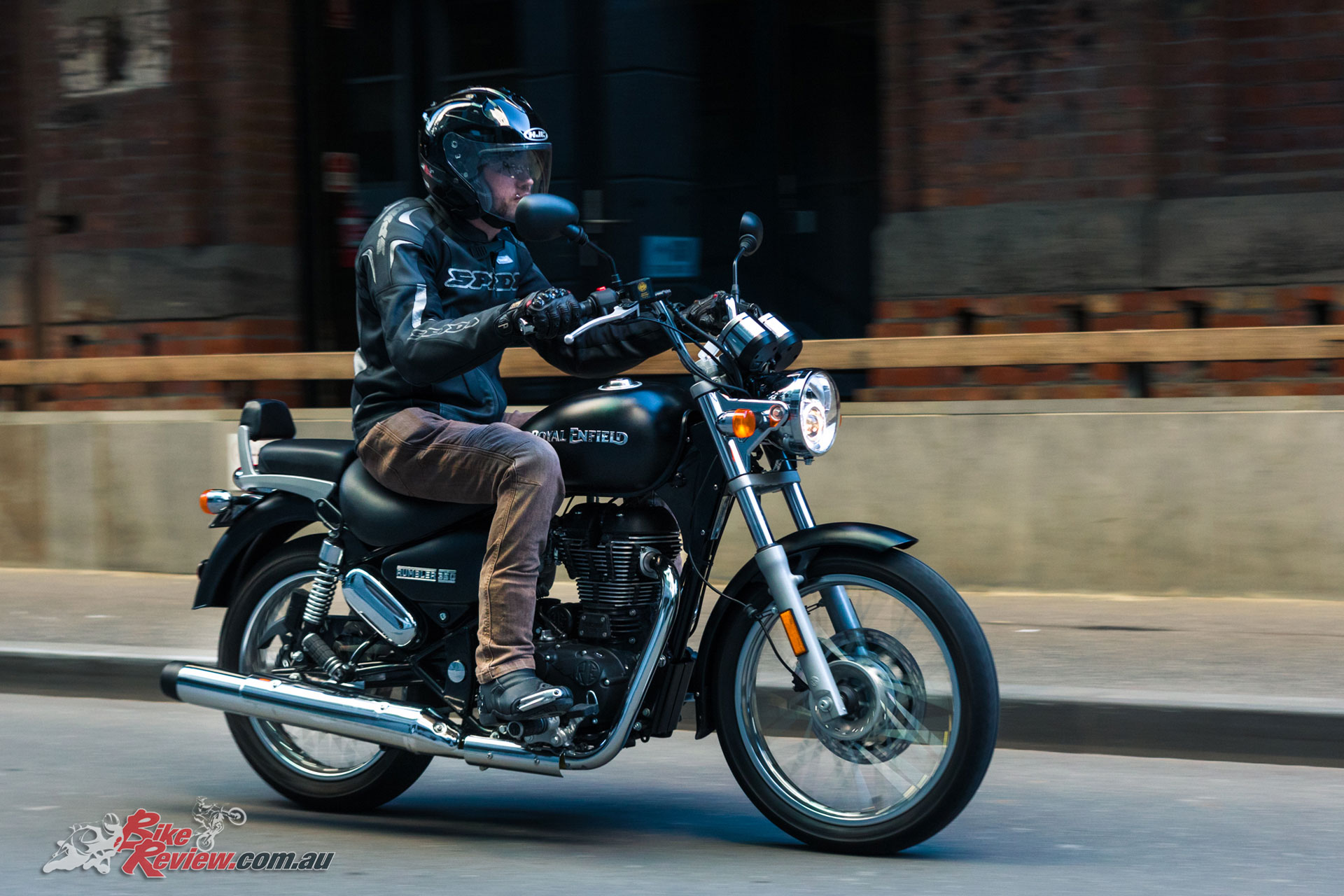 So where does the Rumbler 350 stand? I think it has a pretty unique niche, somewhere near the cruiser LAMS segment, and aimed directly at riders who want something highly authentic. This bike doesn’t just look like a classic, Royal Enfield have maintained that feel and experience. It’s a real blast from the past and in that regard, has a lot to offer.

Royal Enfield told us their thinking was simple and fun group rides, commuting to work and the shops and leisurely riding, and from spending most of a day on a fleet of Rumbler’s that seems a great assessment. 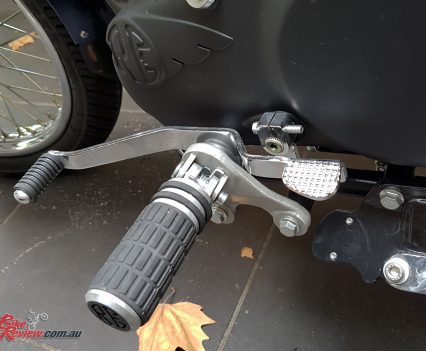 Forward controls with a toe/heel shifter is a nice touch, if a bit strange at first 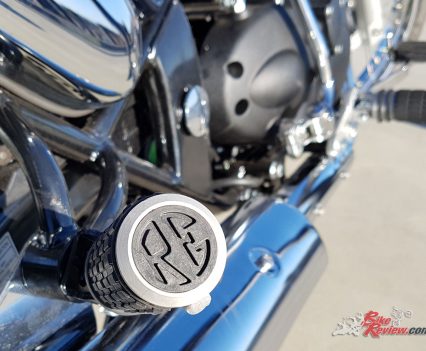 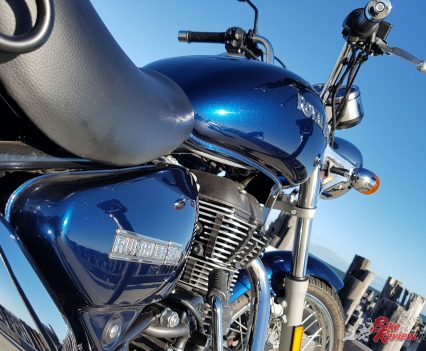 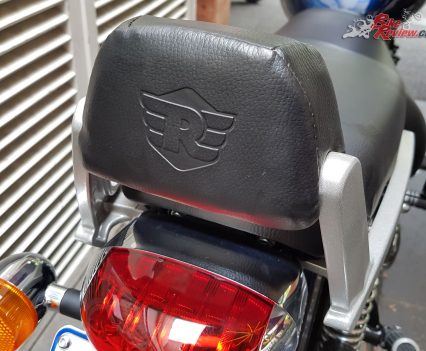 The pillion backrest is a strange addition, a clean rear end with a rack would certainly help looks

For those who like the looks and styling, and don’t want the highest performance LAMS offering they can get their hands on (for their budget) the Rumbler 350 will be a fun choice. I don’t think it’ll appeal to everyone, but for those after the authentic experience, you’ve got to go with Royal Enfield if you’re buying new, and you’ll also get that two-year warranty and roadside assist!

It’s just a shame that the buy-in isn’t a bit lower, as I can see a much wider appeal if the Rumbler was that bit cheaper than all the other 300cc options, not just those after a cruiser, but also people just considering trying two-wheels. Maybe that’s just the optimist in me speaking, hoping that someone will bring out an entry level offering at such a competitive buy-in that it’ll bring back the heyday of motorcycling… 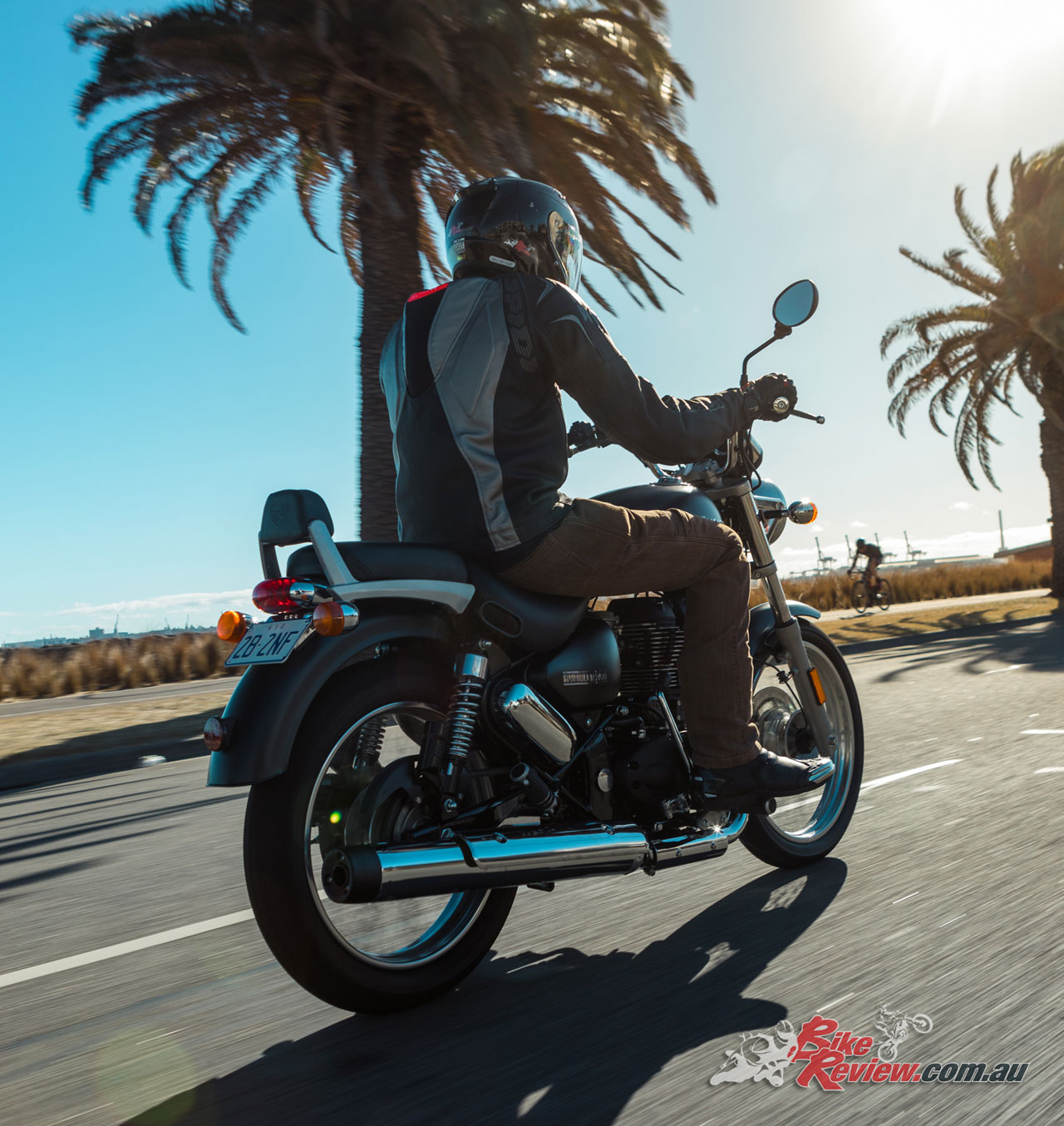 All in all the Rumbler 350 is an interesting option, with a focus on authenticity and relaxed riding 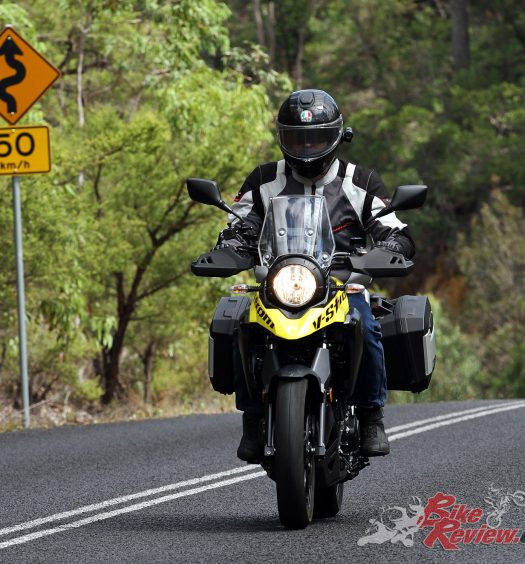 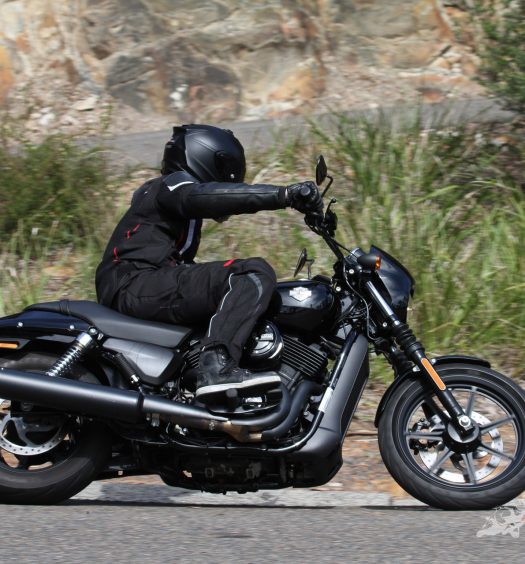