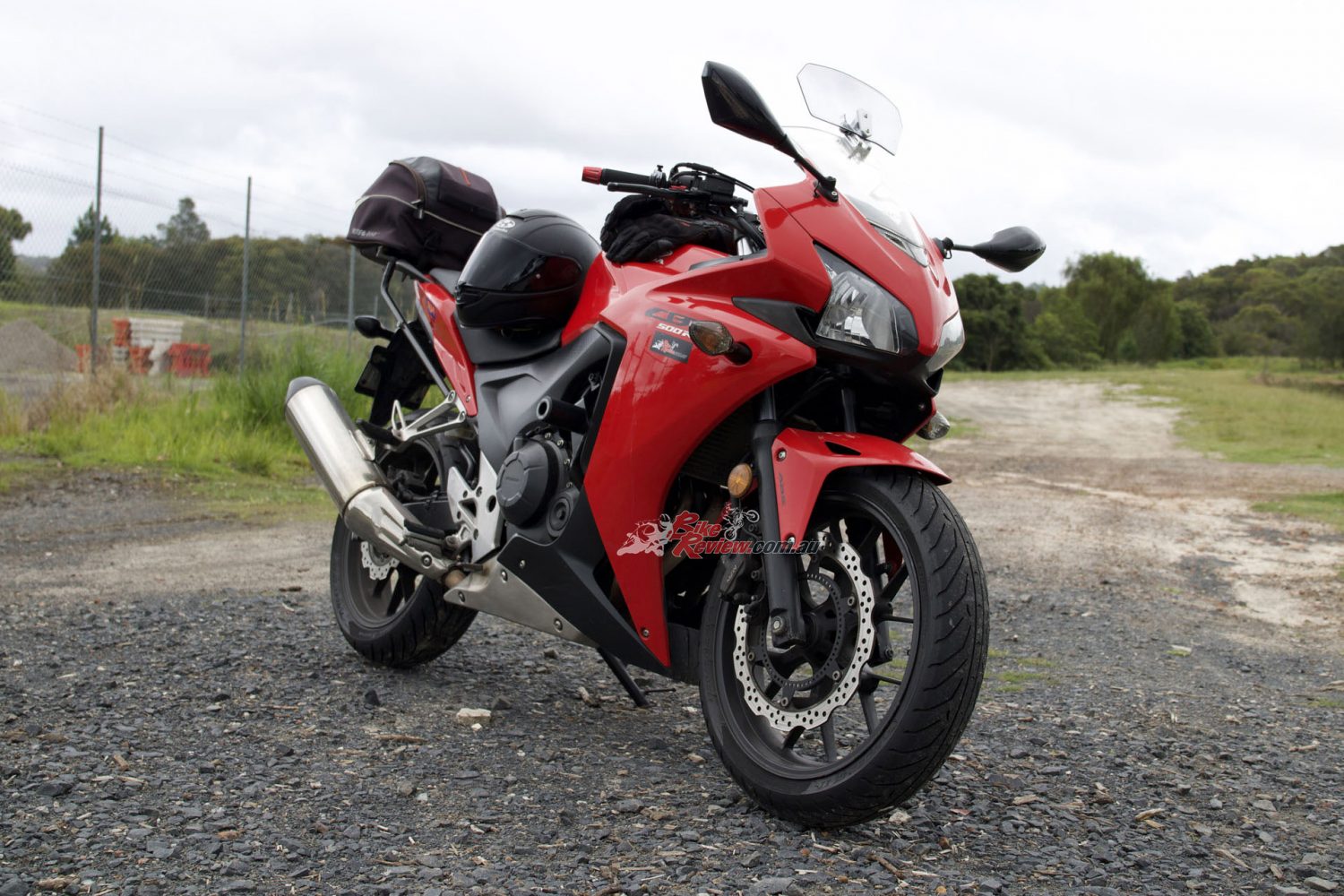 Nick has been putting the miles down on a set of Pirelli Angel GTII tyres fitted for a long term review on his CBR500R daily ride. Here's his first impression... Images & Words by Nick Ware.

Pirelli’s Angel GTII sports touring tyre arrived Down Under back in mid 2019. We’ve sampled them over the years on a variety of press bikes for short runs, however, we are now doing a long haul test after fitting a set to Nick’s CBR500R for his commuting duties. 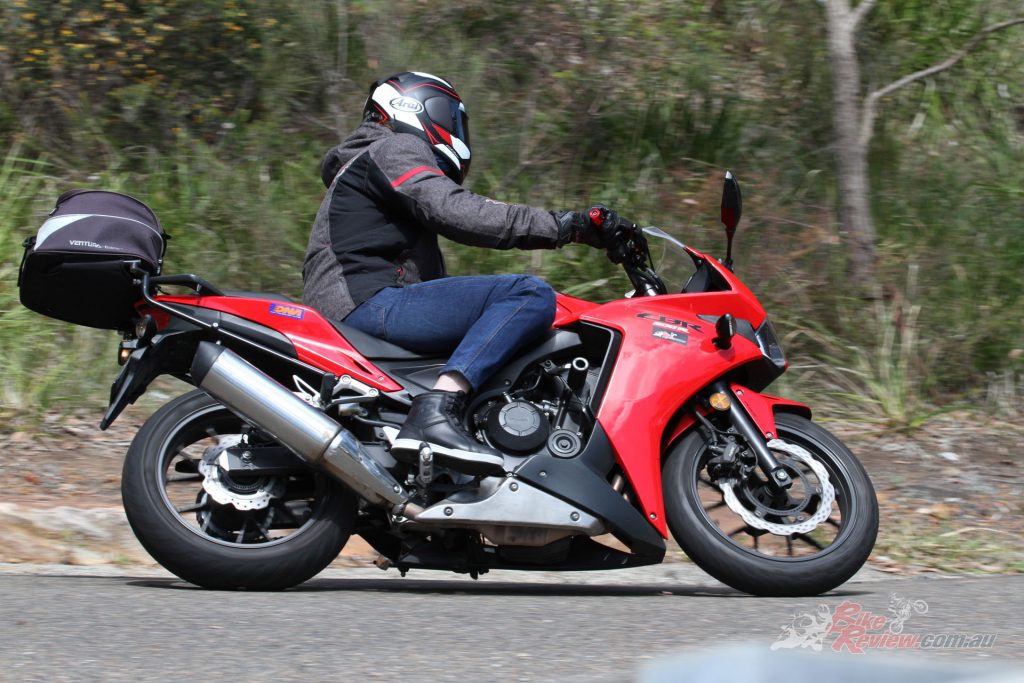 Nick’s Honda CBR500R was the perfect mid-range motorcycle to test the daily wear of the Angel GTII.

Pirelli designed the Angel GT II with the aim of rewriting the rules of the Sport Touring segment thanks to key features including high mileage, sporty handling and grip combined with fantastic wet conditions behaviour and great confidence and safety to the rider. 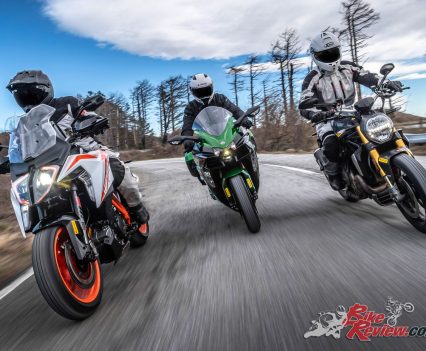 Pirelli advertised the Angel GT II tyre as something that suits all road bikes. 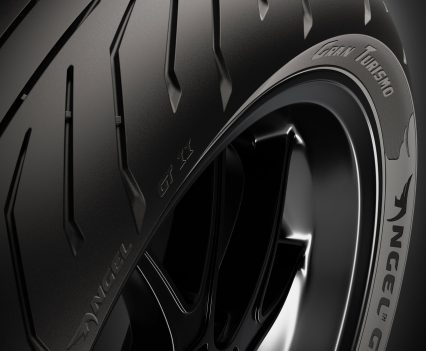 The aggressive tread lines aren’t just there for show, they expel water well in the rain.

The Gran Turismo designation generally refers to travelling at speed over a long distance, with safety and comfort. The development of the Angel GT II has been focused on consolidating the former Angel GT’s strengths, which was already a benchmark for mileage and versatility with different bikes and conditions. Pirelli looked to enhance wet performance and confidence in order to define a new reference point for the Sport Touring tyre segment, with Pirelli DNA and the Gran Turismo concept.

Nick’s Experience
I’ve had the Angel GT II tyres on my daily ride for two and a half months now and I’ve done just on 2500km. The GTIIs are marketed as an outstanding performer in the wet and I honestly can’t argue. It’s been raining a lot here lately on the NSW Central Coast and I’ve been commuting 120km each way to University in rain more often than not unfortunately. 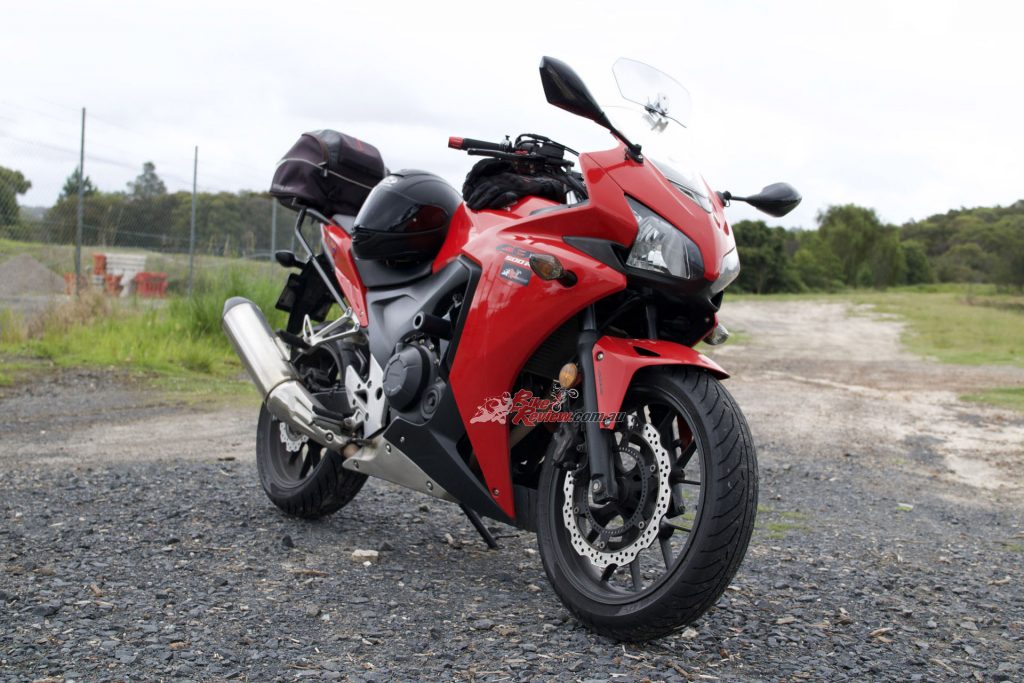 “The Pirelli’s have held up well given the 2500km I have put on them, most of which was riding in a straight line.”

After putting close to 2000km of the 2500km on these almost entirely in a straight line, there are almost no signs of wear. My commute doesn’t allow for much of a lean angle so I’ve had to save that for weekends, but with the bad weather, I’ve hardly had the chance to push them in the dry. I have had a decent run in the wet though to test edge grip and over a wide range of roads too, from flowing country to smooth blacktop, they offer good feedback and pretty impressive grip. 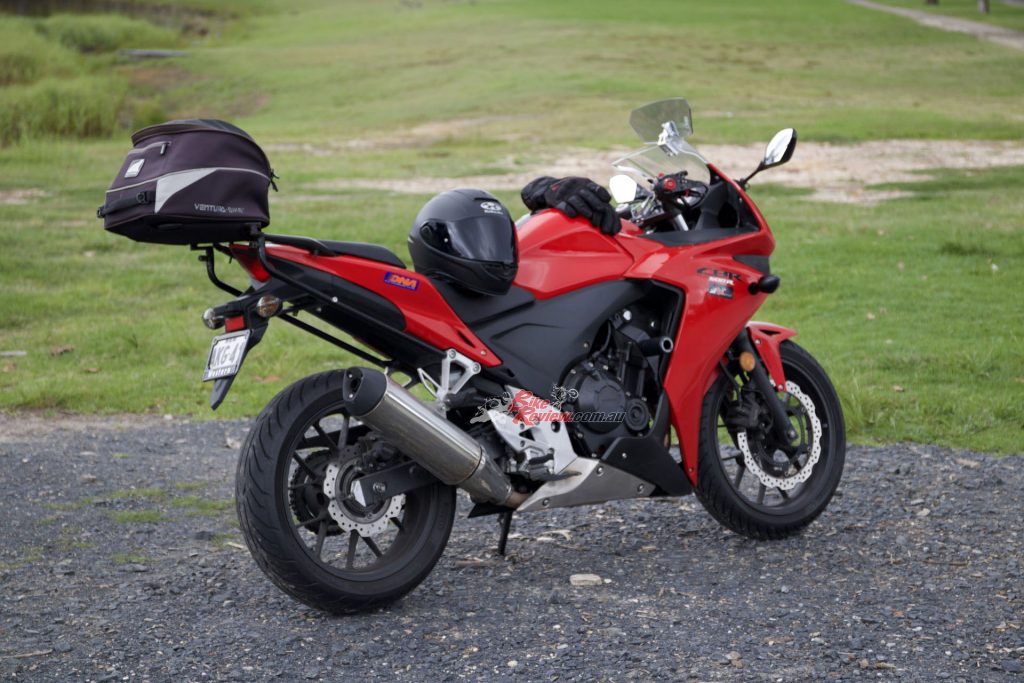 They have a fairly conservative profile, so there is no sudden drop from upright to lean over the shoulder, this means it is easy to feel for side grip in wet conditions and as the grooves go to the edge, decent lean angle is possible on some wet surfaces. On the slimy polished tarmac, there is less feel, but no scary slides, only a little bit of predictable crab walking on the shoulder of the rear, but nothing on the front to speak of. 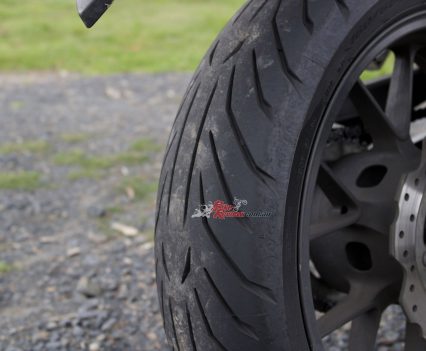 With Euro development it is only natural that the Angel GTII should be so good in the wet. 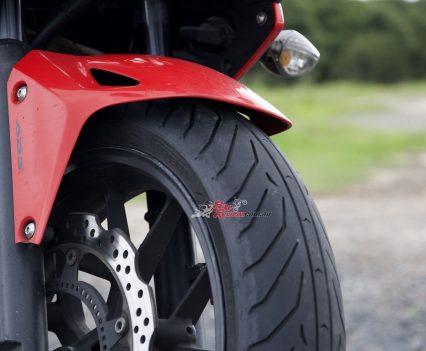 Despite long-rides in a straight line, they held up incredibly well.

I’ve felt none of the usual slips you’d feel in the rear while accelerating out of the longer comers and I certainly haven’t had any of the scary front moments I’m used to on the little CBR. This tread design really seems to push out the water incredibly effectively and there is a high silica content for the chemical grip to compliment the mechanical grip. 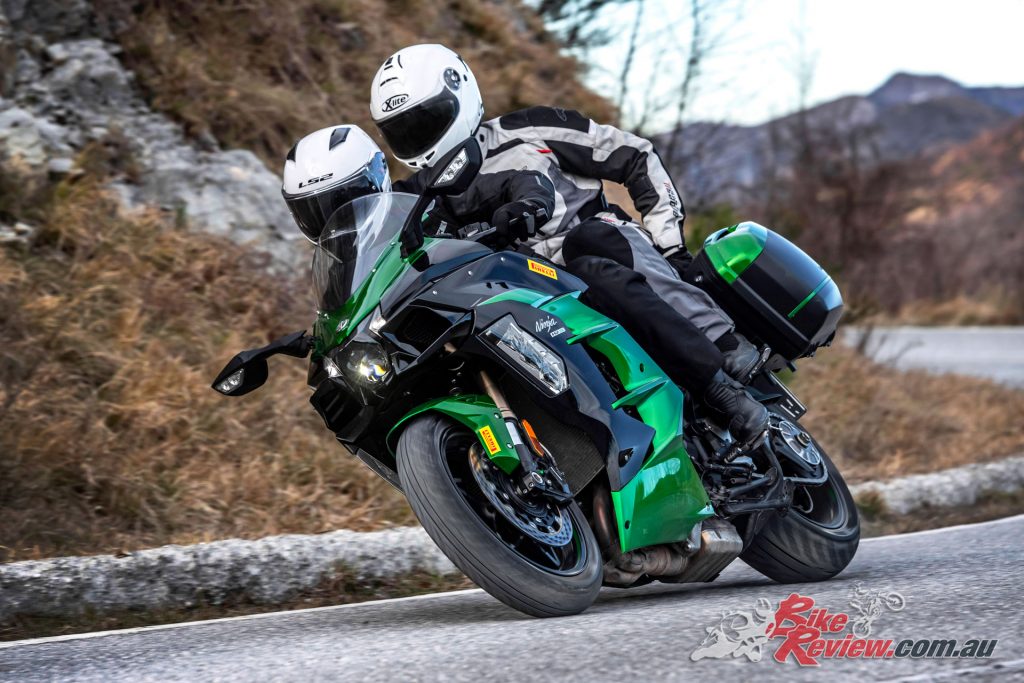 The sizing goes all the way up to suit the wide tyres of the Kawasaki H2 range and other big sports tourers.

Size wise, I’m running the 160/60 – 17 on the rear and 120/70 – 17 on the front, both running standard pressures. They seem to be wearing really nicely, the chicken strips down the sides are frustrating me but I’m hoping to get a chance to test some of that edge grip a bit more in the dry in the coming weeks, just my luck, at the end of Summer. I remember Jeff getting 10,000km out of a set of the Gen1 Angels. 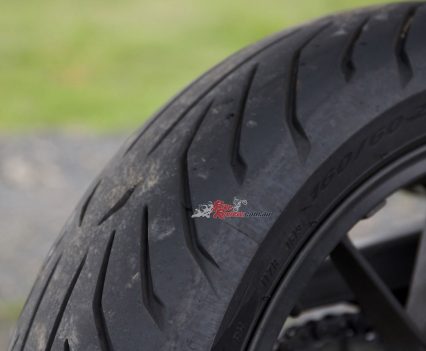 The rear tread doesn’t look worn out despite the high milage each day. 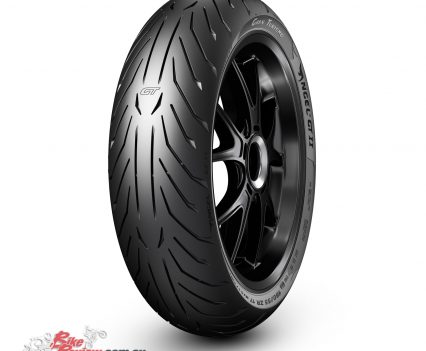 Pirelli have offered them in a number of different rear wheel sizes to suit most street bikes.

These ‘all-rounder’ tyres are really impressing me so far, as expected from Pirelli. I know the Angel GT very well but  haven’t noticed any differences yet from the first generation ones, which I did use for six months on our Benelli Leoncino Staff Bike. I haven’t pushed them hard yet. I’ll be back soon with a full review once I get to the 5000km mark and do a track day as well. As for pricing, the 160/60 17 I use has an RRP of $299.95 and the 120/70 17 has an RRP of $219.95. 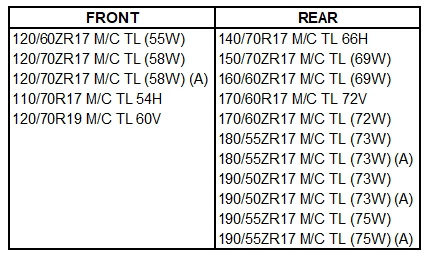 Nick has been putting the miles down on a set of Pirelli Angel GTII tyres fitted for a long term review on his CBR500R daily ride. Here’s his first impression… Images & Words by Nick Ware. 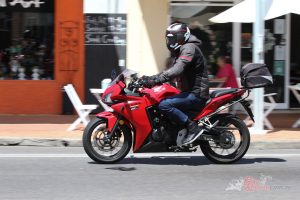 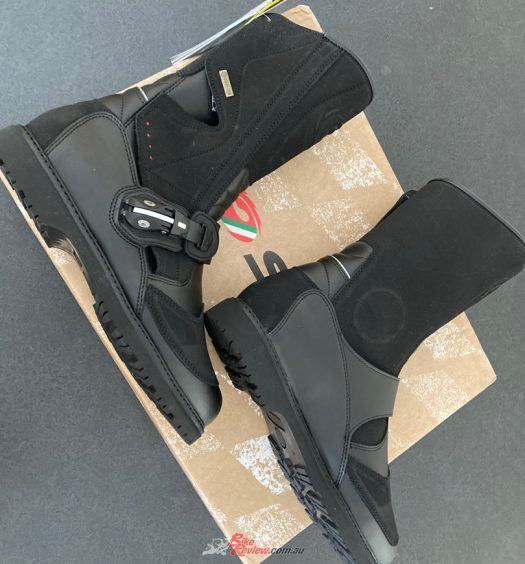 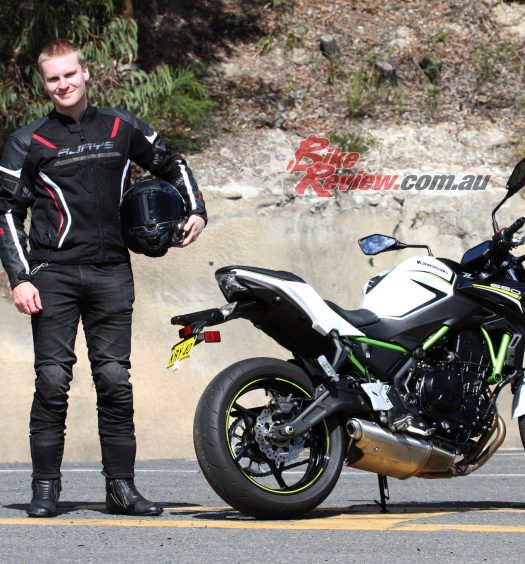