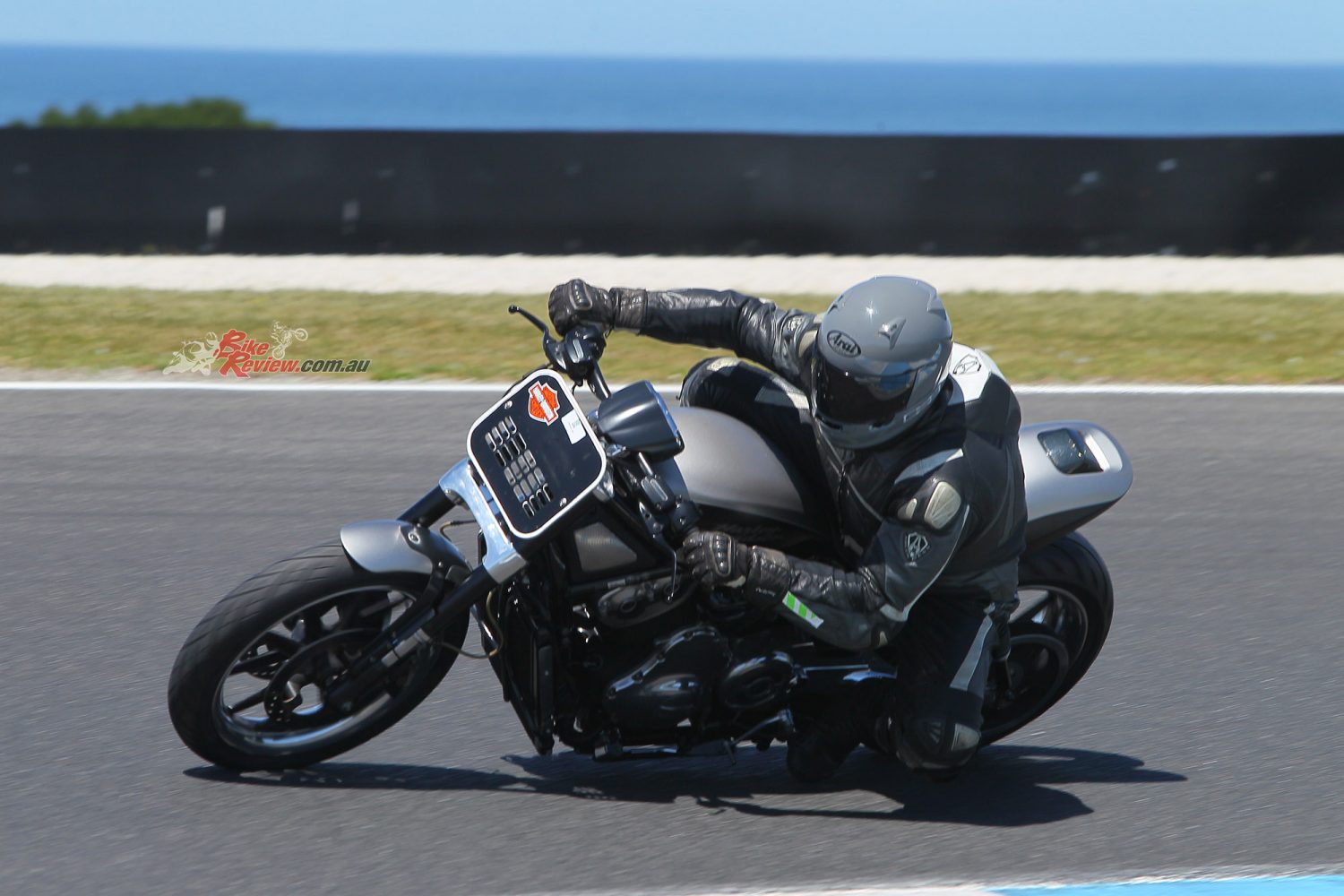 I doubt there is a motorcycle rider anywhere in the World that, when it boils down to it, as a basic necessity to being able to ride a motorcycle of any type or style needs one thing more than anything else. What is that something? Tyre grip! 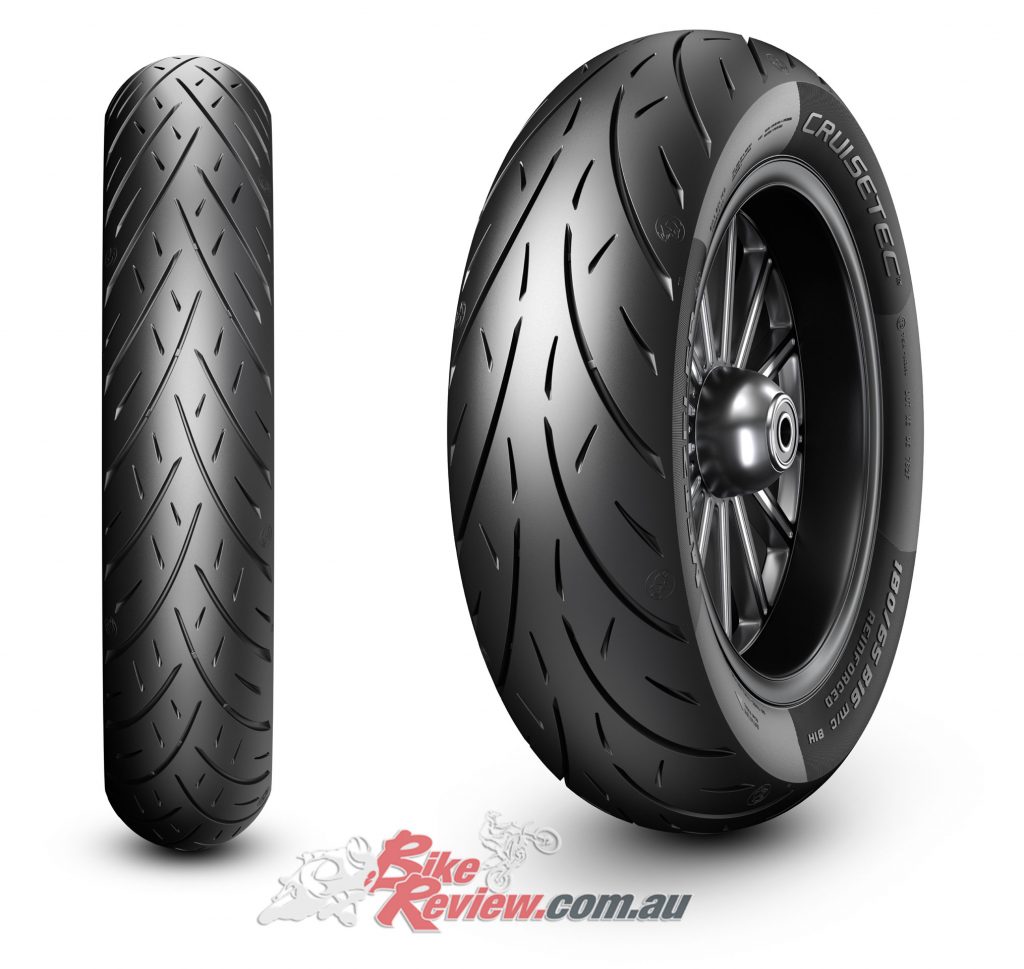 Yes, other things can have an influence on how your motorcycle sticks to the road, such as suspension, geometry, type of bike ie a sportbike, cruiser, trail bike and so on. But unless there is a good designed tyre on your wheels that are in good shape, no amount of other parts or styles of the motorcycle will help you stay upright and not spit you down the road or scare the living daylights out of you.

I’ve recently been testing Metzler CRUISETEC tyres on my Harley-Davidson V Rod Street Rod. This has not been a normal tyre test. You see, my V Rod is a track bike, I’ve been developing the bike for a while now for track days. I’ve done a lot of days at Sydney Motorsport Park ( I manage the ride days there) and I’ve had the bike down to Phillip Island Ride Days in recent months as well. 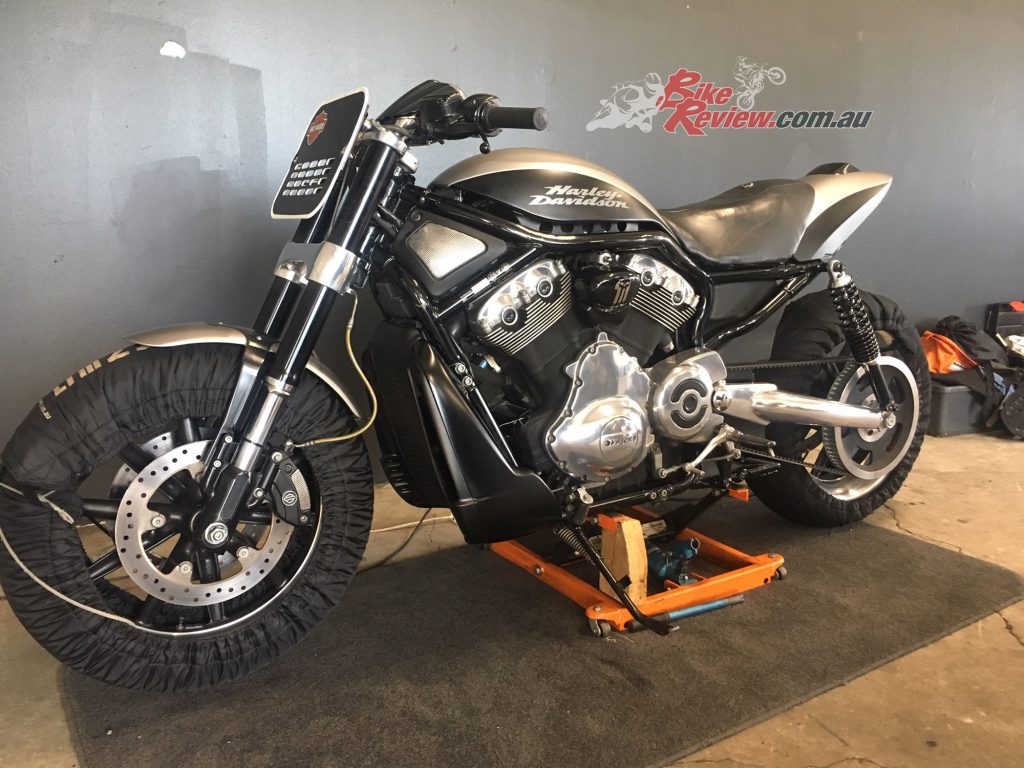 After four decades road racing, Paul has been developing this bike for a while as due to knee injuries he can no longer ride a sportsbike.

It’s an unusual bike to see at a track day but I’m in a position where I can no longer ride a proper sportsbike due to a longer term injury to my knee that has made it impossible to ride a true sportsbike without dislocating my knee each time I ride. The V Rod offers a better rider position and there is less load on the knee so no more pain and dislocations…

The V Rod runs a 120/70 –19in front and a 180/55 – 18in rear, so it impossible to get true race or track day tyres for it because of the unusual sizes of the wheels. So a trusting grip level and sure footedness is something that I need for the bike. 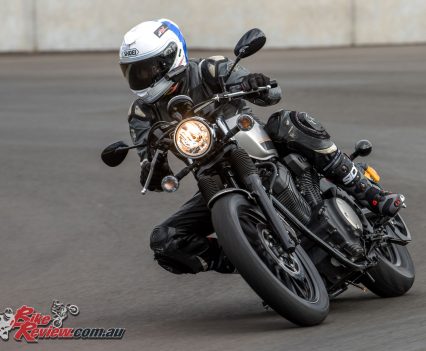 Jeff attended the launch and rode on track and road. 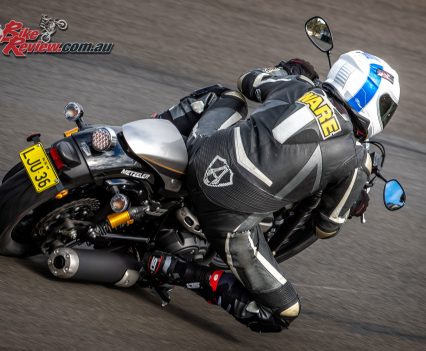 He was impressed with the grip in cold conditions.

Metzler released the CRUISETEC range of tyres in 2019 and Jeff attended the Asia Pacific launch, here is his report with street and track testing. I was aware of the tyres and was keen to try a set in the V Rod. Metzeler supplied a set of the tyres we needed in the sizes we needed and the constructions we needed also. There is a rear 180/55 – 18in that is for very heavy motorcycles, the construction of that tyre for my V Rod would have been an overkill.

The tyres were fitted and the next track day at SMSP I was keen to test them out. I am a believer of doing things right, and part of that with these tyre was to eliminate the chances of running the tyres cold on track and risking early damage to the tyres from cold tear. So, tyre warmers were used to get the tyres up to a suitable temperature before getting on track. I also adjusted the tyre pressures as the day went on to try and achieve the best grip levels and the best tread wear on the tyres. 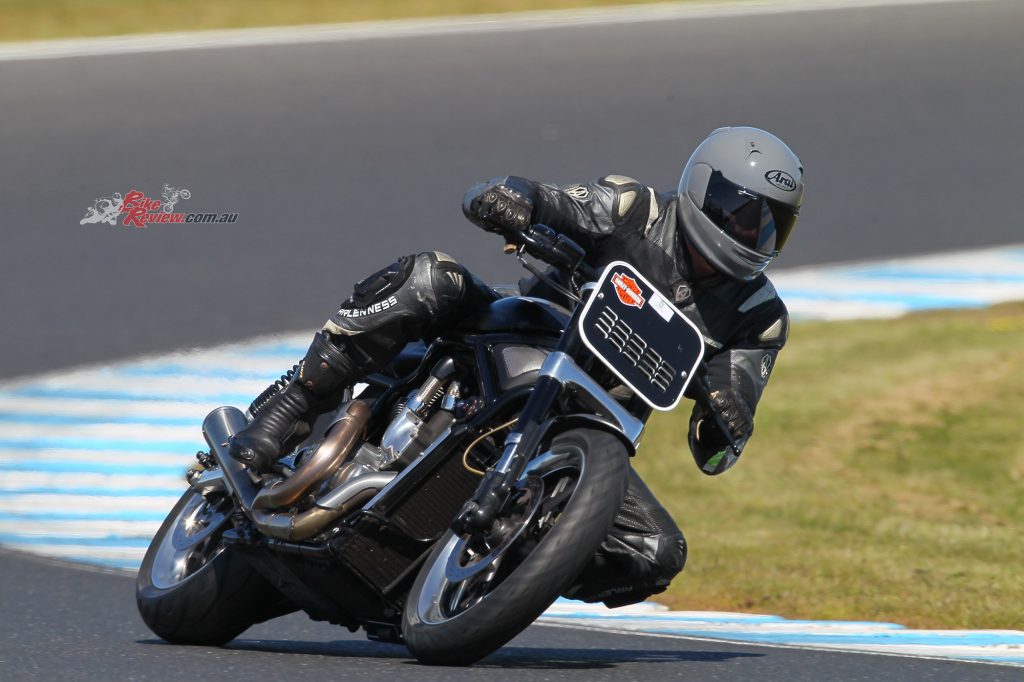 From the first session it was obvious that these tyres had some serious grip. The CRUISETEC tyres, from the very first lap, were stable, offered great edge grip and better corner speed than I have felt before. Finding the limits I could push the bike to was slowly built up to over the day, some tyre pressure changes, to more what you would expect from true track tyres (34psi front hot and 26 psi hot rear) really started to show the performance levels of these tyres.

Braking stability is important when doing track days and the CRUISETEC front proved to be very stable braking in a straight line and continuing that heavy trail-braking into the corner. The front never moved or gave any lack of grip. The stability of the front when going through T1 at SMSP was impressive and sure footed into and through the corner. At the harder braking corners like T2 and T9 the front gave no hint of duress and handled all the abuse I gave it. 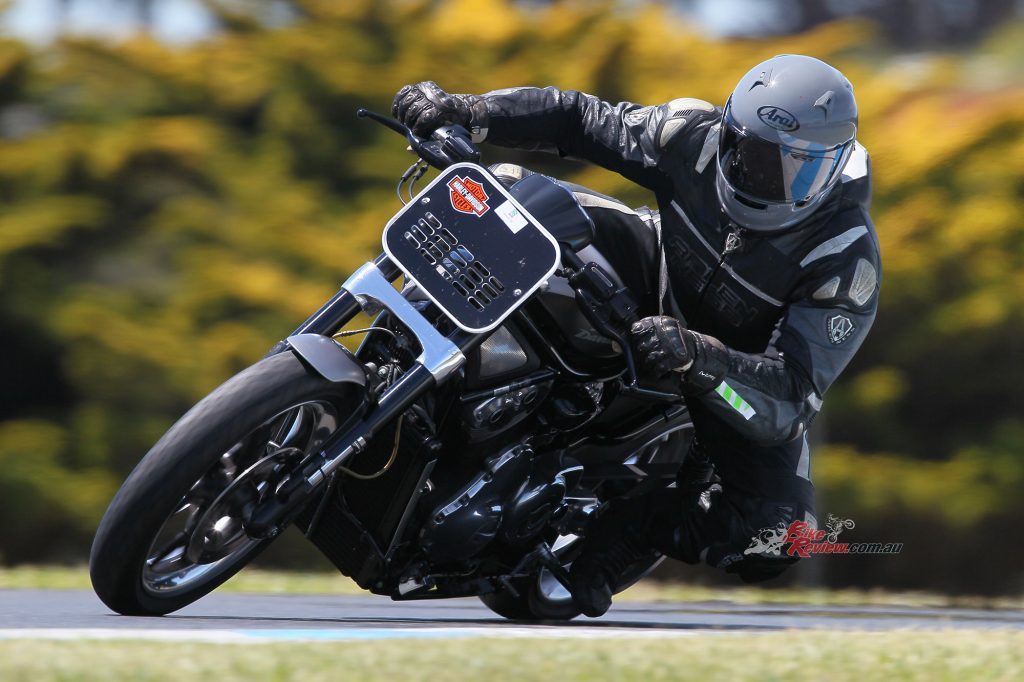 Rear grip is fantastic, allowing hard acceleration off turns, while the front is sure-footed on or off the brakes.

The rear was also very impressive, once I had achieved the right tyre pressure, the footprint of the rear tyre and the compounds, soft on the sides and harder in the middle gave the bike a stable platform to really be able to drive the V Rod hard out of the corners with no fear of the back stepping out. The rear was so predictable and trusting it felt very much like a proper sports tyre.

Another four days at SMSP with the tyres and they continued to perform perfectly. So five days at SMSP! I then did a two day event at Phillip Island. I wasn’t sure what to expect at the Island because of the more flowing corners and higher speeds – and notoriously abrasive track surface. To my delight the CRUISETEC were fine. The grip level was excellent and really allowed me to push the bike very hard through the very fast parts of the track like Southern Loop and the Hayshed.  The CRUISETEC never moved an inch or gave me any worries about grip or wear. 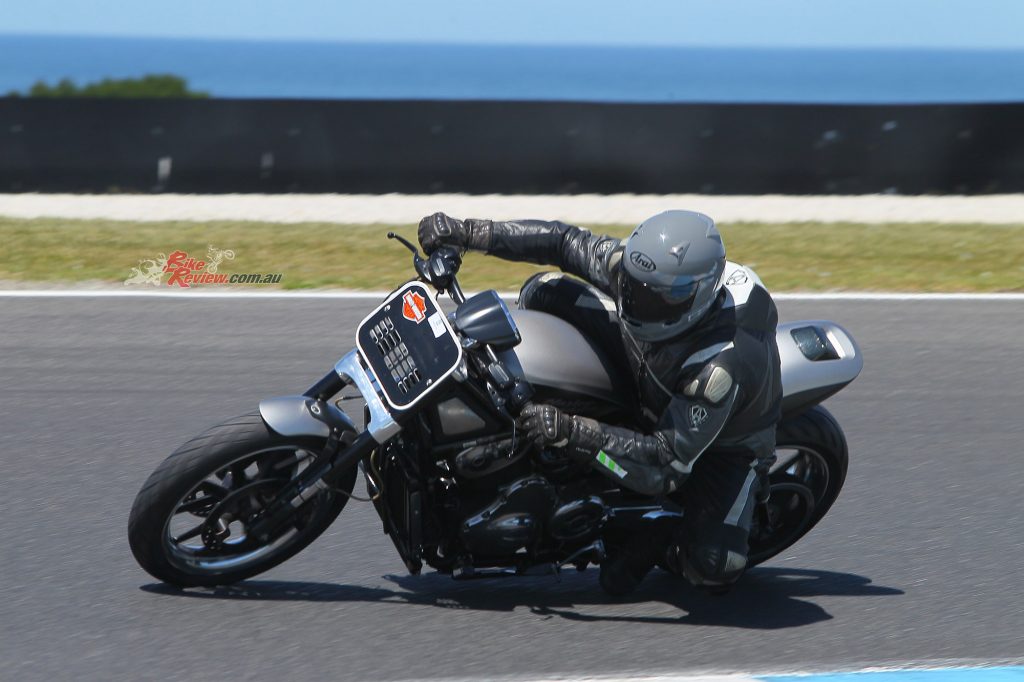 After 10 track days there is still life left in the CRUISETEC hoops!

The CRUISETEC have done an incredible 10 track days now. They are showing signs of some very slight scalloping on the front tyre, but that is expected with the weight of the V Rod and the rake of the front forks. The rear tyre is looking fantastic. It’s showing all the signs of what you would expect from a track tyre. Orange peel look on the tyre in the drive area on the side of the tyre but there is no signs of excess heat or early deterioration of the tyre. As far as wear depth, both tyres have only worn about 20 per cent  from new. They would now be fine for many thousands of happy street kilometres. 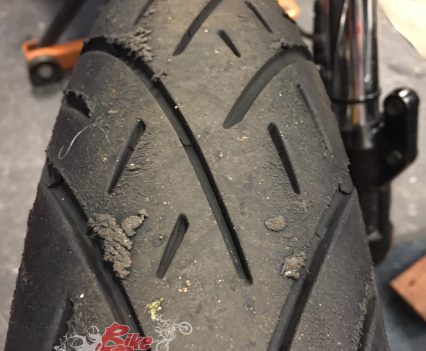 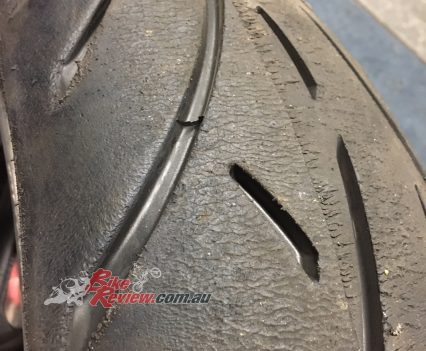 The dual compound rear tyre with its 40 per cent carbon black centre adds to the better mileage on the road and long kilometres. The sides have a higher silica content to improve the grip levels needed for fast riding. The front tyre also has a high silica content for better warm up temperatures from cold and better grip levels also.

Are these the tyres to have on your road Cruiser? Absolutely a big yes. As I said at the start of this story, it’s all about the grip in the tyre that allows us all to enjoy our rides. Why put up with inferior tyres when you can have a tyre that provides the confidence to ride your bike well in all circumstances, be it road, track, wet road fast or slow or evasive, emergency situations. And we know they are good on the road after Jeff tested them. Trust in your tyres is your last resort, so why compromise?

The CRUISETEC tyre is a high silica content tyre and has a performance-oriented profile with a much higher curvature than a traditional cruiser tyre. The tyre is somewhere between a triangular and square construction, similar in feeling to that of the fantastic ROADTEC, SPORTEC M3 or even M5 Interact. 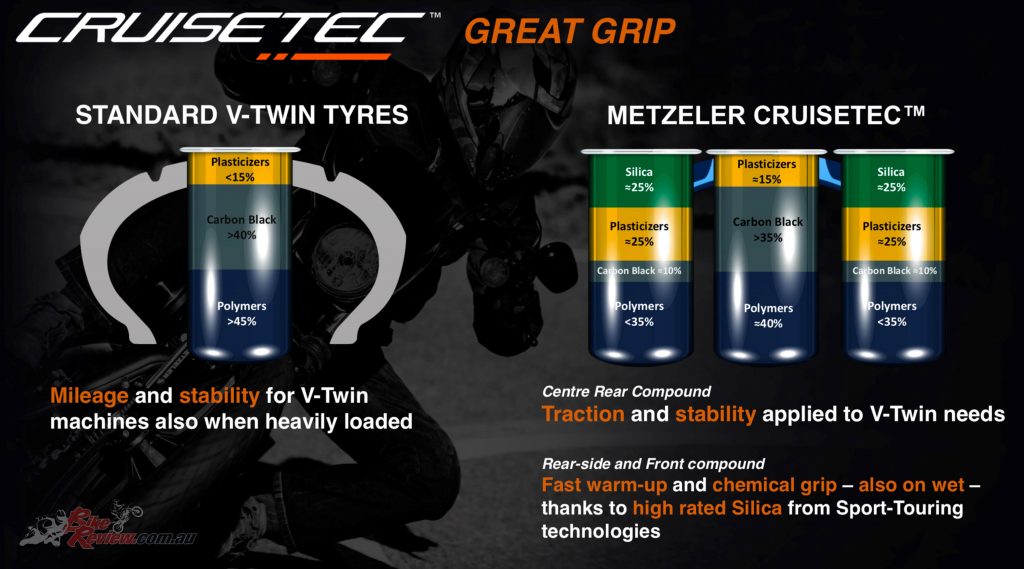 The rear is dual-compound, with the central area made up of 40 per cent carbon black, giving the high mileage, strength and stability needed for these heavy and torquey machines. That central strip makes up for 80 per cent of the tyre footprint while upright. The shoulder compound contains more silica and plasticizers to give high grip and stability when cornering.

At the front, a single compound is used, which is very close to the compound on the shoulders of the rear tyre, with a slightly higher silica per centage of 25 per cent (the rear is 20 per cent), ensuring fast warm up, good chemical grip in wet and dry and sporty tyre front feel for the rider. High silica content also gives great wet weather and cold weather grip.

The CRUISETEC tread pattern was designed using Metzeler engineers extensive experience with sports touring tyres used in a wide and often extreme range of conditions in all corners of the World.

The front tread pattern features alternated diverging grooves crossing the central section and are designed to give braking stability and efficiency while still offering great water evacuation. The tyre also compliments ABS systems by offering high levels of grip, while general cruiser tyres often lock up very early in the braking process, activating ABS prematurely, which can be very annoying… 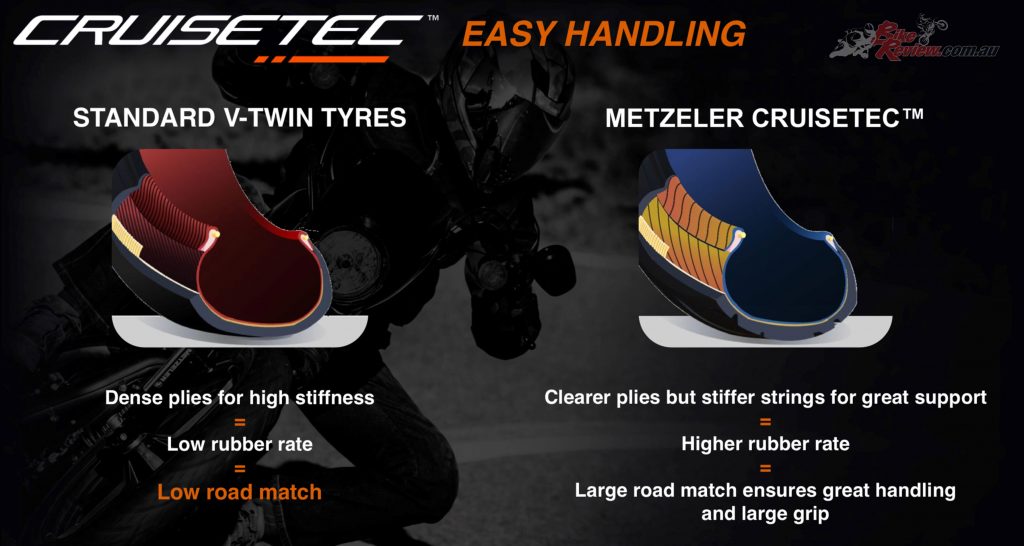 At the rear, the tread pattern is completely engineered for performance cruiser riding. The long grooves don’t cross the central section, leaving a larger footprint for wear and the acceleration and loads a large heavy cruise produces. Wet weather performance is not completely compromised at the rear when upright, as the front tyre evacuates water ahead of the rear tyre. 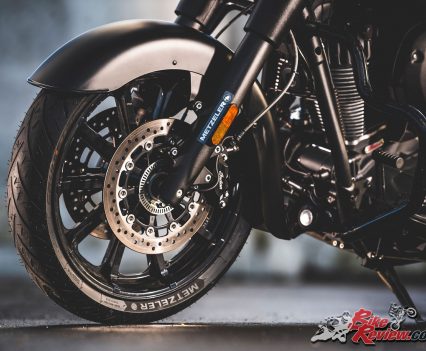 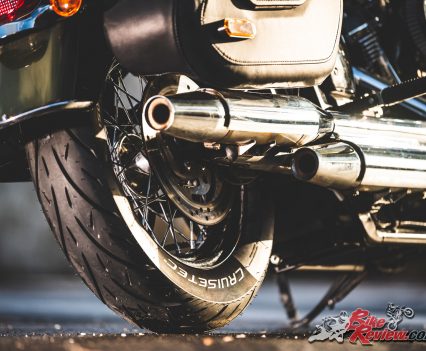 The tyre construction features both radial and cross-ply elements coupled with either bias or 0º steel belts. The CRUISTEC features a stiffer carcass and belt cords than a standard tyre in the cruiser segment. The design has wider plys to allow room for more structural rubber, particularly on the side wall, with the aim of not compromising comfort too much.

Profile-wise the CRUISETEC tyre ventures into a much more sports touring area than a traditional cruiser tyre, which compromises footprint during cornering by being constructed to provide a large footprint at upright, and low pressure on the tread area due to footprint, for comfort while highway riding, thus reducing the footprint when leaned over. This gets worse as the tyre wears, basically squaring off the tyre as the central section broadens. 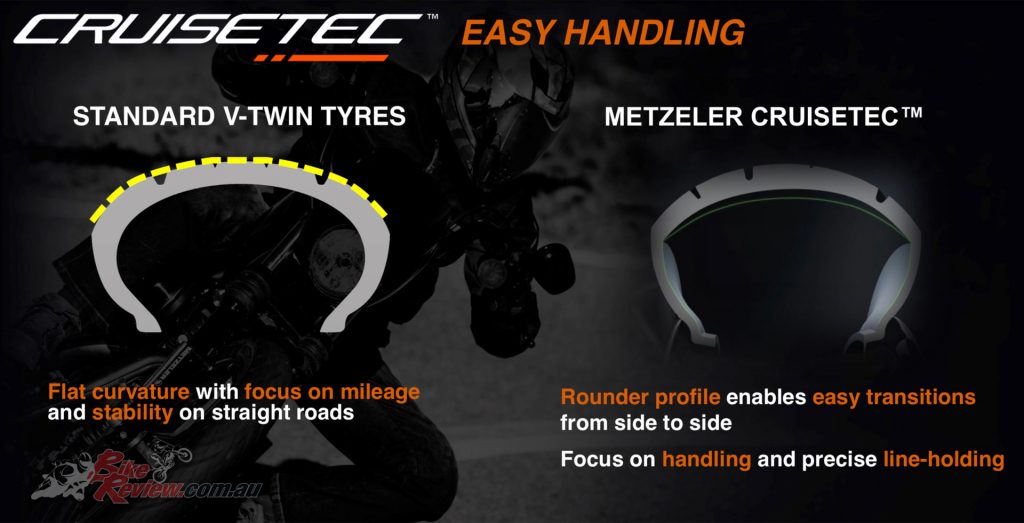 The Metzeler multi-radius technology already tried and tested in the sports touring segment is implemented in the CRUISETEC, the first time in a cruiser tyre, giving an increase in grip and handling thanks to a large footprint.

The shoulder on the CRUISETEC is around 20 per cent lower than a traditional cruiser tyre, meaning when leaned over to 25 degrees, the theoretical footprint is reduced by less than 10 per cent compared to 20 per cent for an average square construction cruiser tyre. In other words, there is more rubber on the road leaned over. 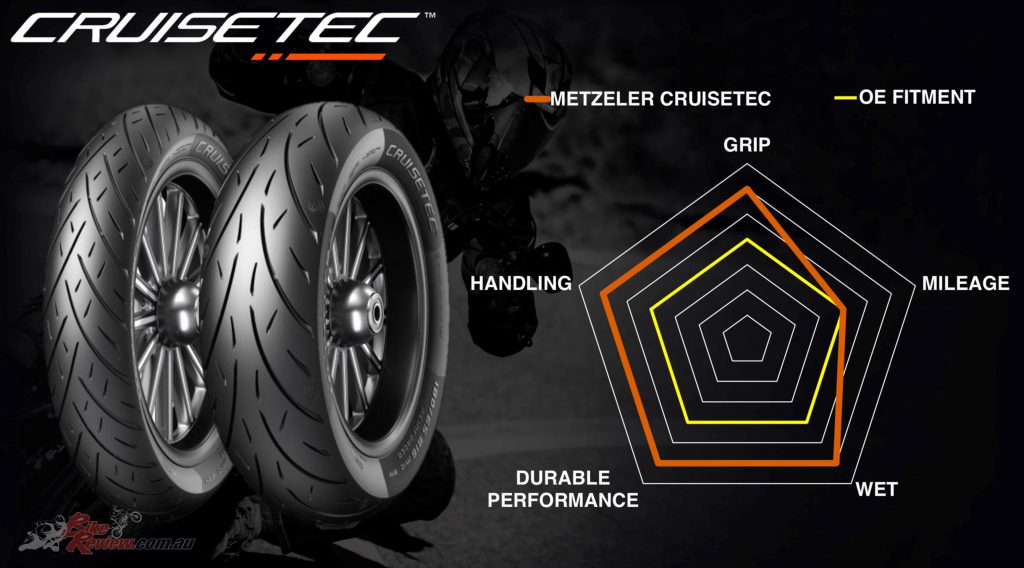 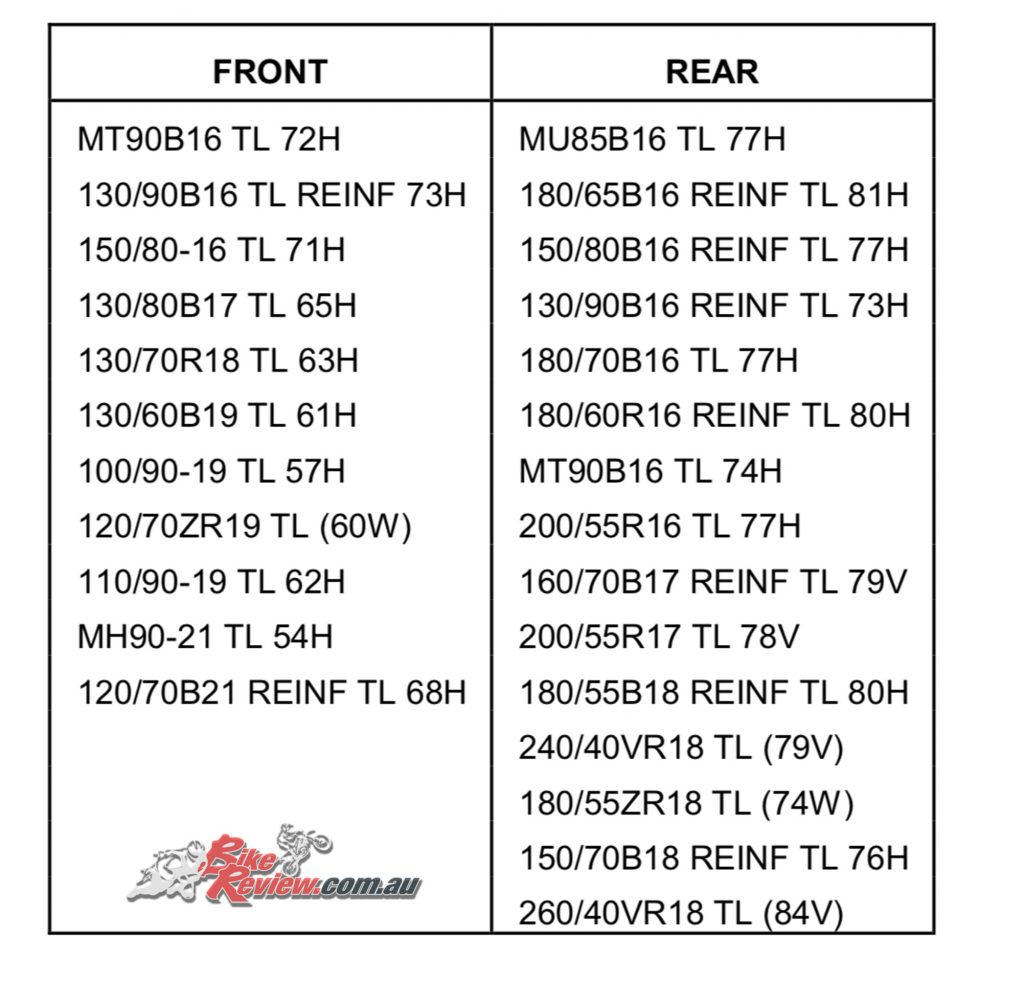 The Metzeler CRUISETEC tyres survived 10 track days on Paul Bailey’s Streed Rod and proved to be an outstanding on track tyre for the sports cruiser rider who wants some excitement as well as street cruising. Check out his review… 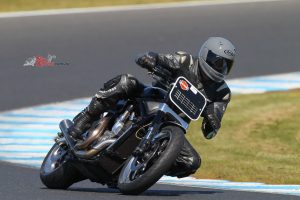 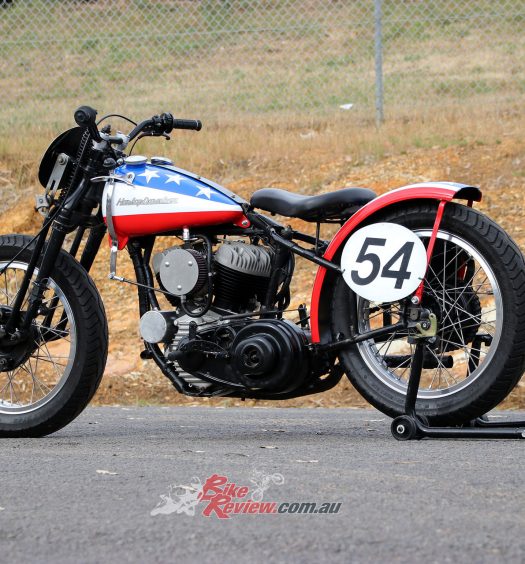 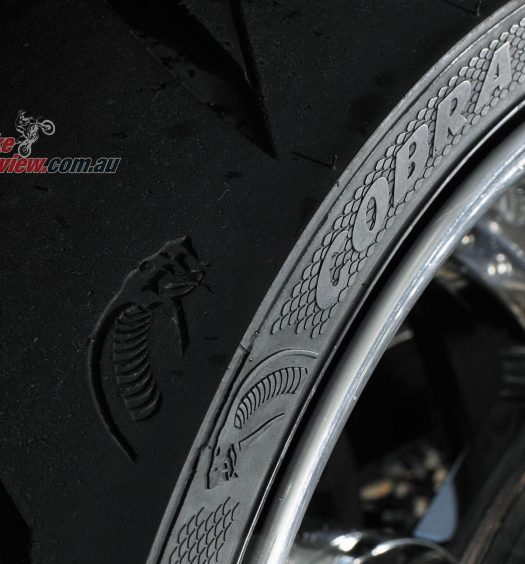